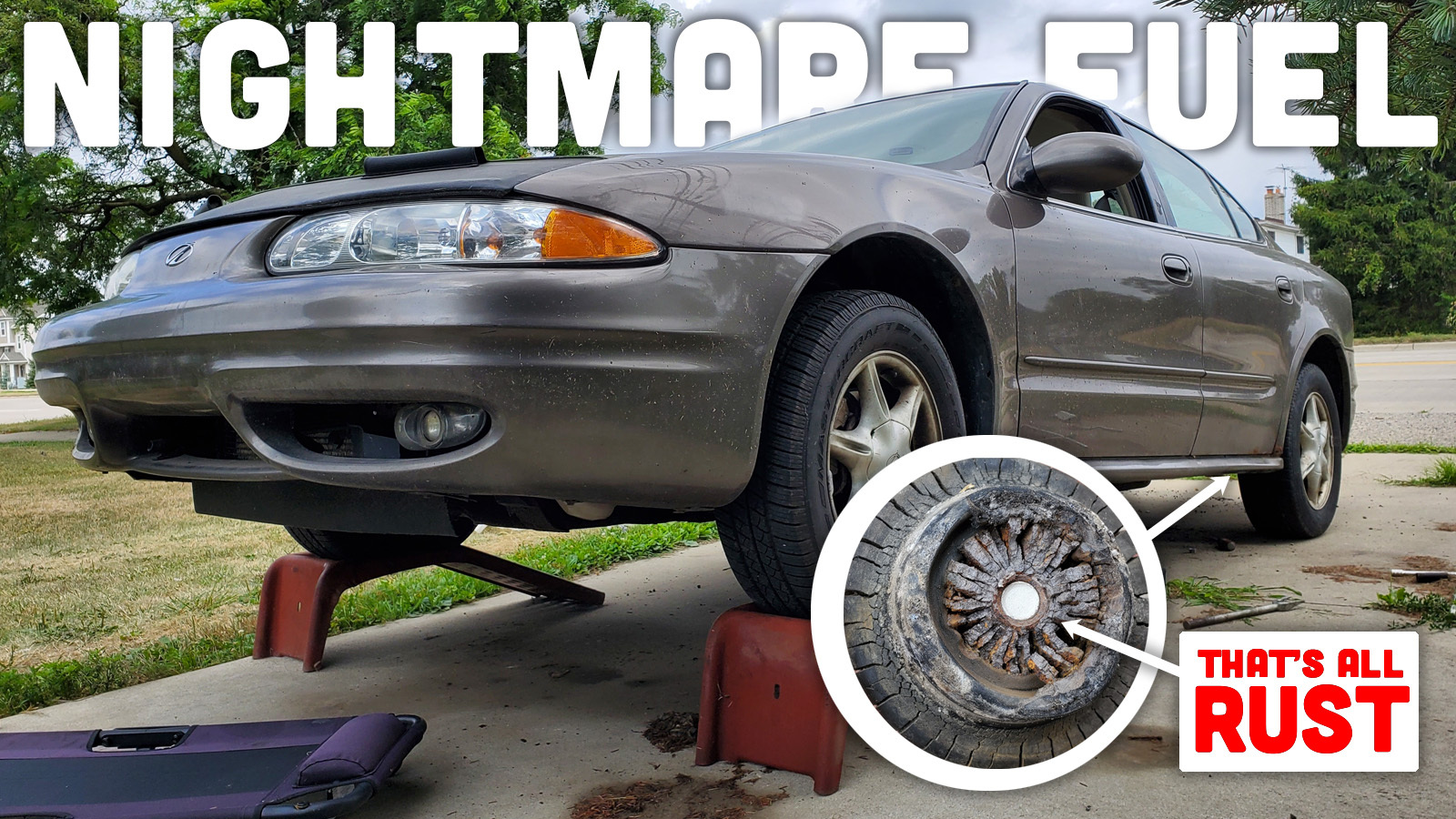 “Whew, finally this thing is fixed!” I cheerfully chirped to my friend sitting shotgun in the $1 Oldsmobile that has for years been breaking faster than I can fix it. “Let’s drop this off before some bullshit happens and I have to replace the sus—” CLUNK! I heard a noise under the car. “What was that?!” my friend blurted. SCREECH! We heard some nasty rubbing from the back end, timed exactly when I touched the brake pedal. “I’m sure that’s just a bad rear brake,” I assured him, since my ABS light was on. We limped the vehicle home and discovered that the problem was much, much worse.

I realize that the idea of a car that I bought for $1 being a pile of shit isn’t exactly surprising for many of you. But you have to understand that this Oldsmobile was my friend’s daily driver just a few years ago before its ignition system went bad. I replaced that and drove the Michigan vehicle 1,400 miles to and from Virginia. It performed admirably, offering a smooth ride and 30 MPG. It seemed like a great car.

But after that trip, things started to get really strange. The car stopped running due to a bad fuse block. My landlord, whom I had given the car after he totaled his Kia Rio, asked me to fix it for him. Unable to decline The Greatest Landlord in History – a couple that has put up with all sorts of my crap for far too long — I agreed. When that job was done, on my test drive prior to delivering the car, the radiator failed. Then the transmission cooler started leaking. Then I handed the car back to my landlord, and in short order, he came over to my house to tell me he had lost braking power while driving. The cause: a rotted-out brake line. I replaced all the lines, but of course, snapped those going to the rear calipers, requiring me to get new calipers and bleed the whole system.

Then the coolant outlet port failed, leaking fluid all over the place. I fixed that last month, took the car on a test drive, and headed to my landlord’s place to deliver their vehicle. The car stalled at a stop sign. 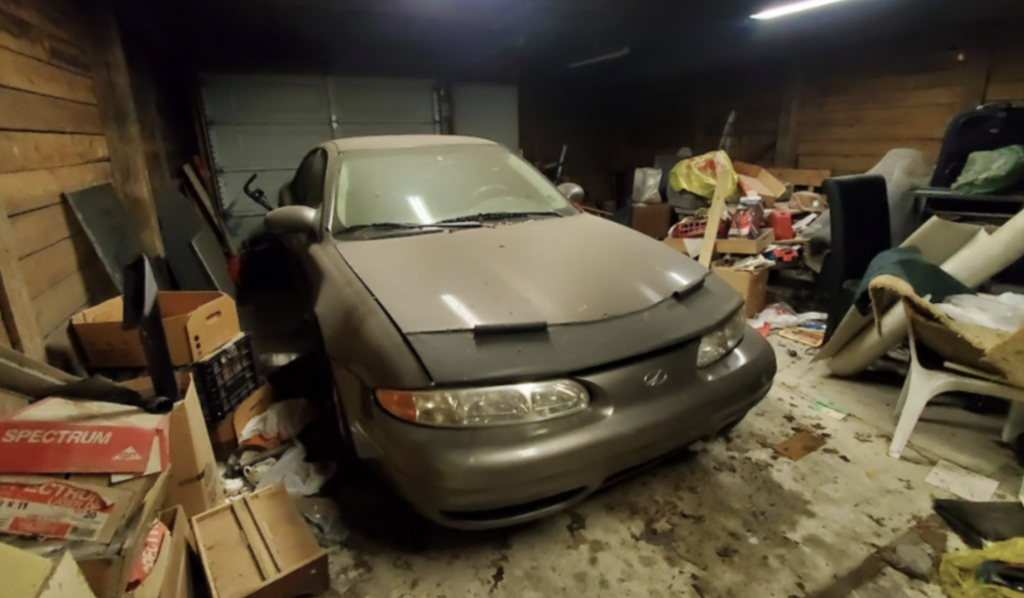 After a bit of diagnostic work, I discovered an intake manifold leak, so yesterday a friend and I took off the plastic intake, replaced the gasket, and bolted everything back up. I later found a bad hose causing another vacuum leak, leading the engine to idle erratically; I replaced the hose, and the car worked well. The brakes were nice, the steering felt smooth, the 2.4-liter Twin-Cam derivative of the legendary Quad-4 engine hummed beautifully, and my landlords were moments from taking delivery of a fully operational vehicle.

Keen to avoid a dirt road, since at the time I wasn’t 100 percent sure I had fixed all intake manifold leaks and preferred to keep the motor from ingesting dust, I executed a U-turn near my house. Lazy man that I am, and since I wanted to put the car through its paces before delivering it, I didn’t do a three-point turn, but instead drove off the road into a shallow depression, then emerged back onto the road. That’s when my friend and I heard the loud bang. And from there, when I tapped the brakes, we heard a rubbing noise, which I thought was just the brake locking up since I hadn’t bled the ABS module after replacing the rear calipers (the brakes worked fine, however).

I limped the car home, walked to the two rear tires, and tried pushing them around, looking for any sort of play, perhaps from a bad bearing or worn bushing. What I found shocked even me, a man intimately familiar with deathtraps:

The rear trailing arm had snapped, and the rubbing noise was the tire moving forward and backwards relative to the car, abrading the inner fender liner. This is an extremely dangerous failure, as the trailing arm’s job is to locate the tire in the fore-aft direction; during braking, or when hitting a bump, the trailing arm goes into tension and compression, holding the wheel in place. Without it, the lateral links would tend to bend, and the wheel could end up breaking away from the vehicle. This, obviously, could be catastrophic.

What exactly happened? And how did I not catch it? Well, let’s have a look at the trailing arm on N-body GM cars like the Oldsmobile Alero: 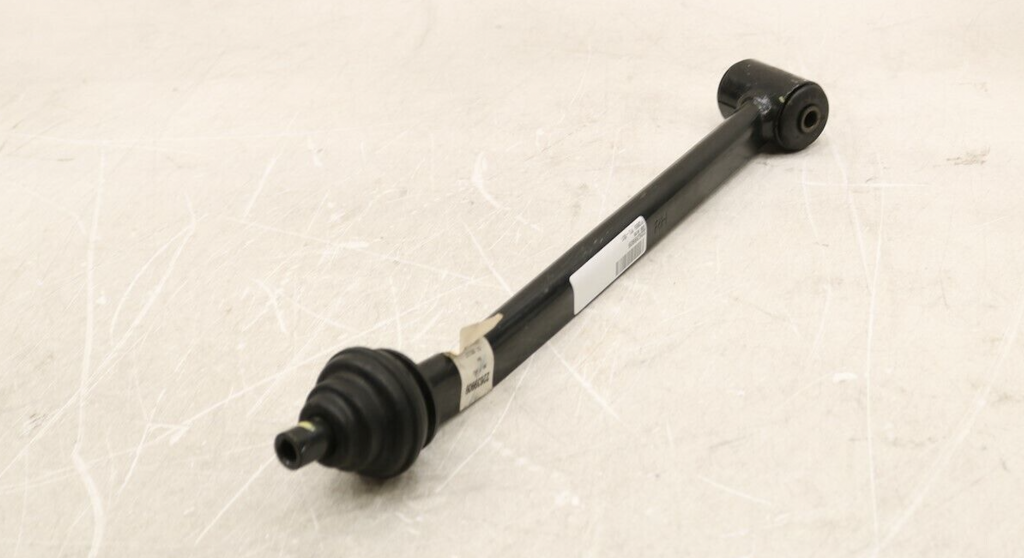 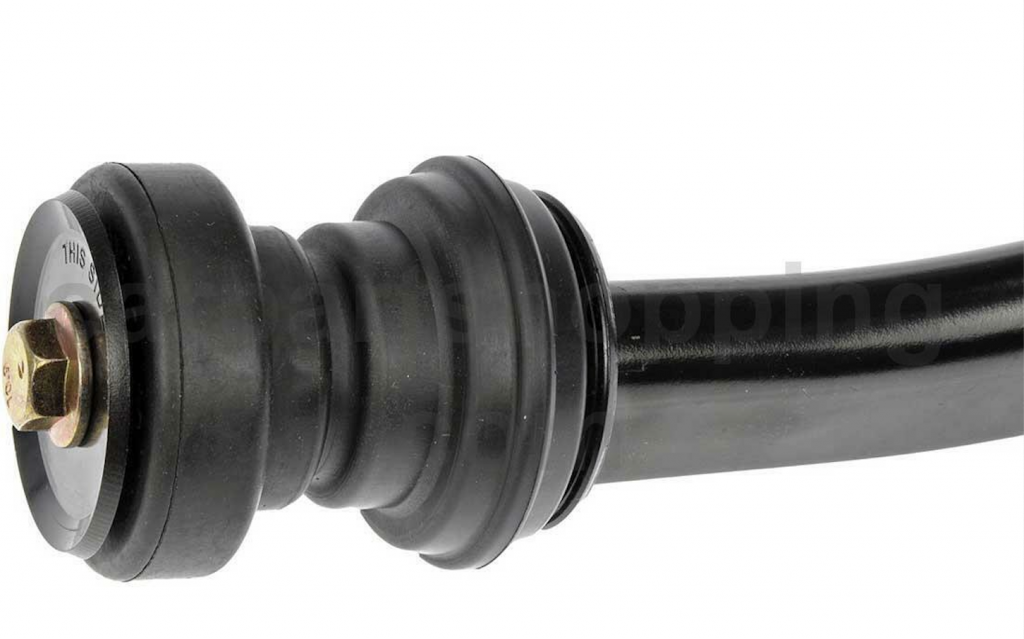 You can see that they’re stamped into a U-shaped bar, with a bushing/through-bolt connection on one end (this connects to the chassis) and a threaded axial rod connection on the other. The threaded rod squeezes two bushings on each side of the rear wheel carrier (you could call it a rear knuckle, though knuckle often refers to the front steering knuckle), locating the wheel carrier in the fore-aft direction. Here’s how it should look: 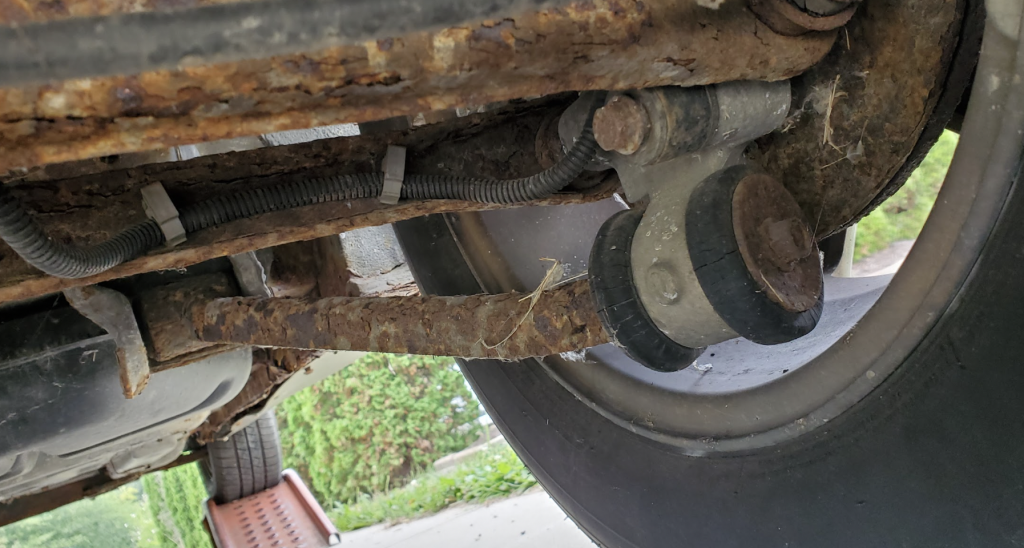 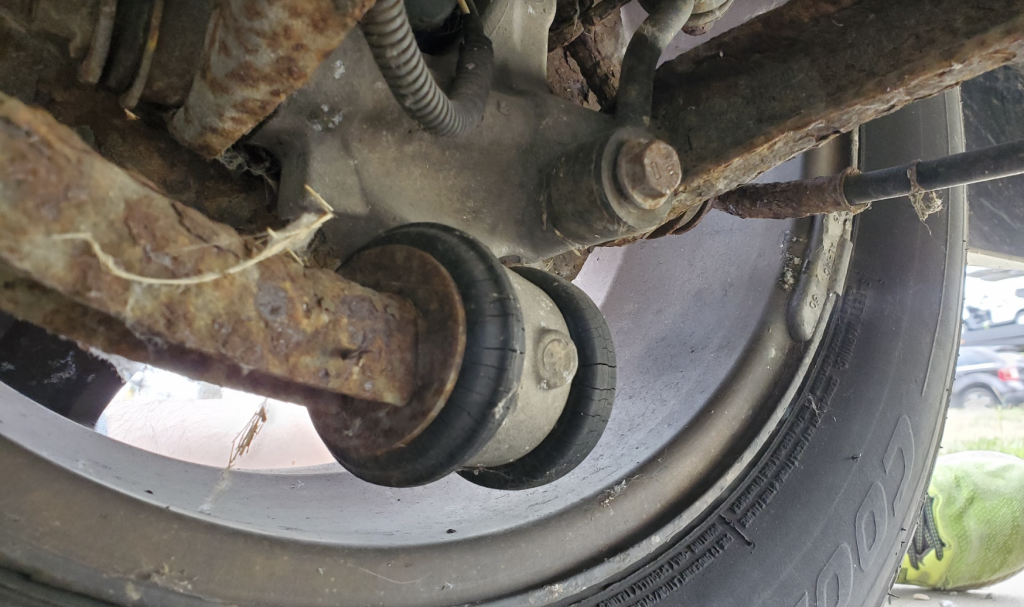 Here’s what it now looks like under my landlord’s car on the driver’s side: 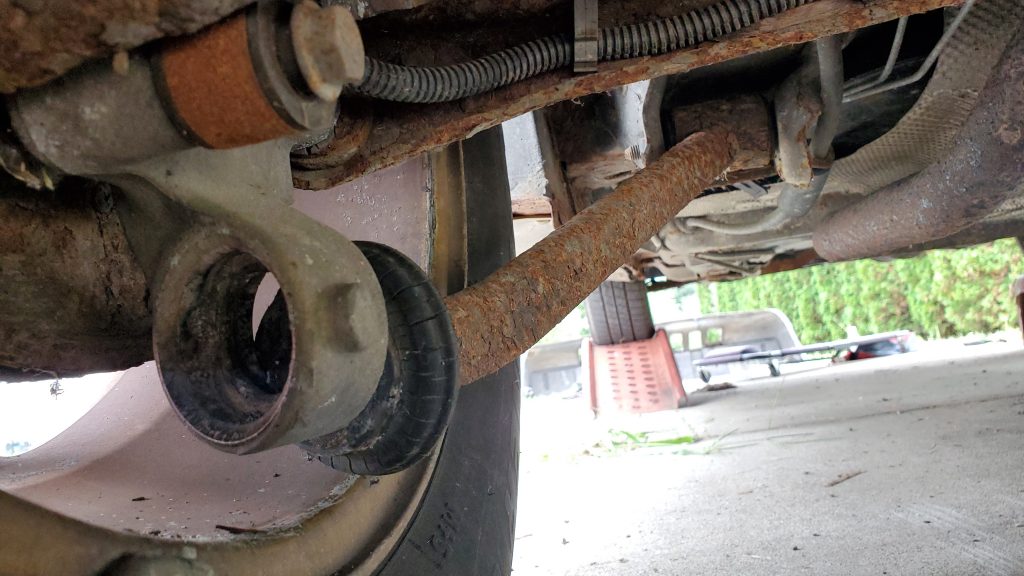 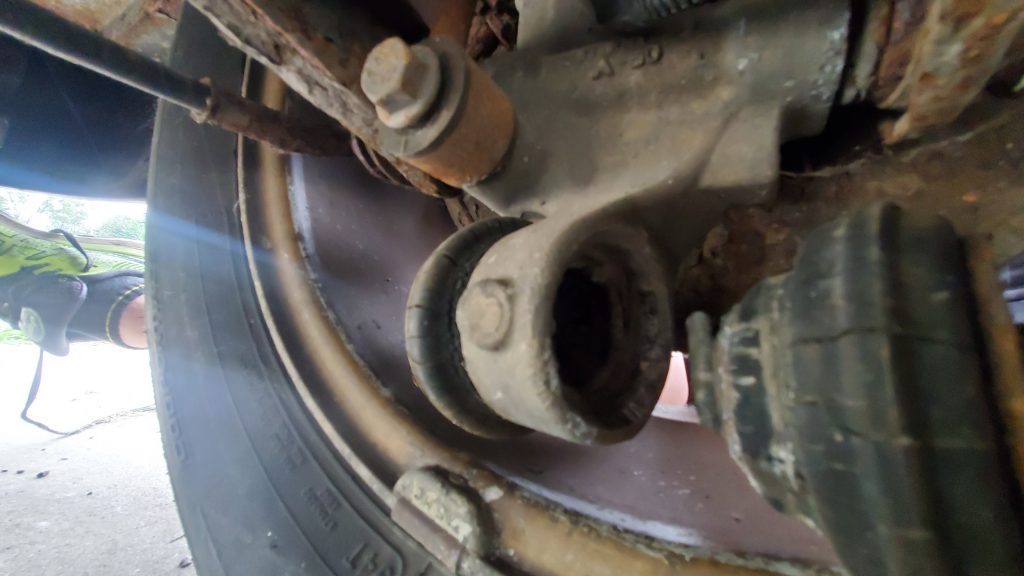 What happened in the case of the dastardly $1 Olds is not that the bolt snapped (that was my first thought); actually, the threaded end of the trailing arm itself snapped, and not anywhere that an inspector could have seen — the failed portion was hidden by the bushings. 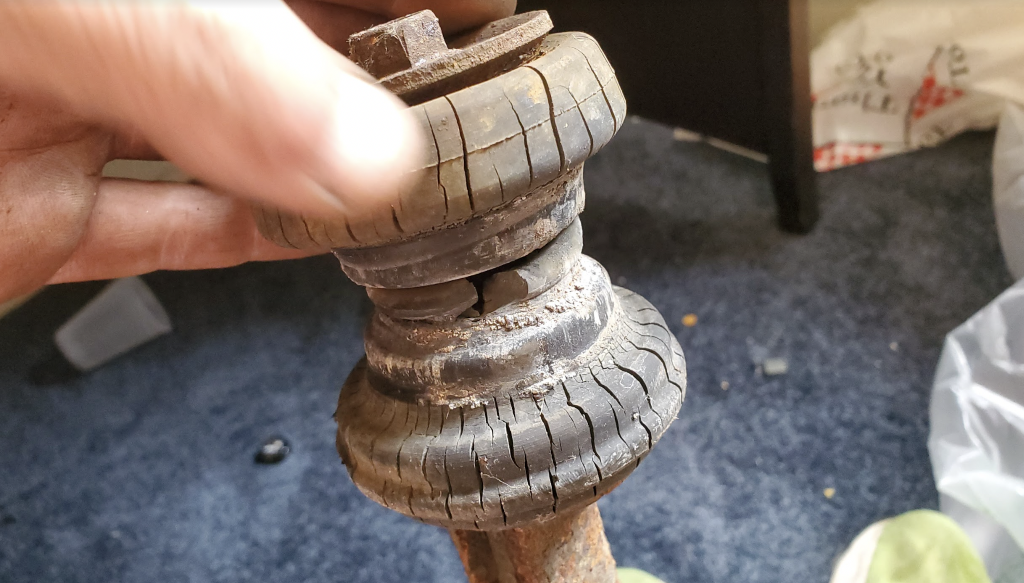 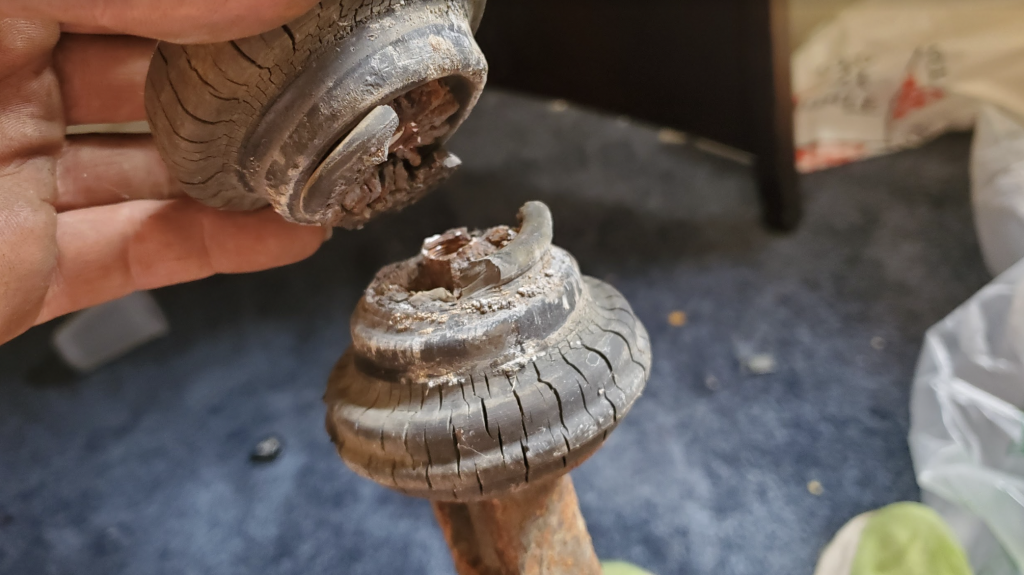 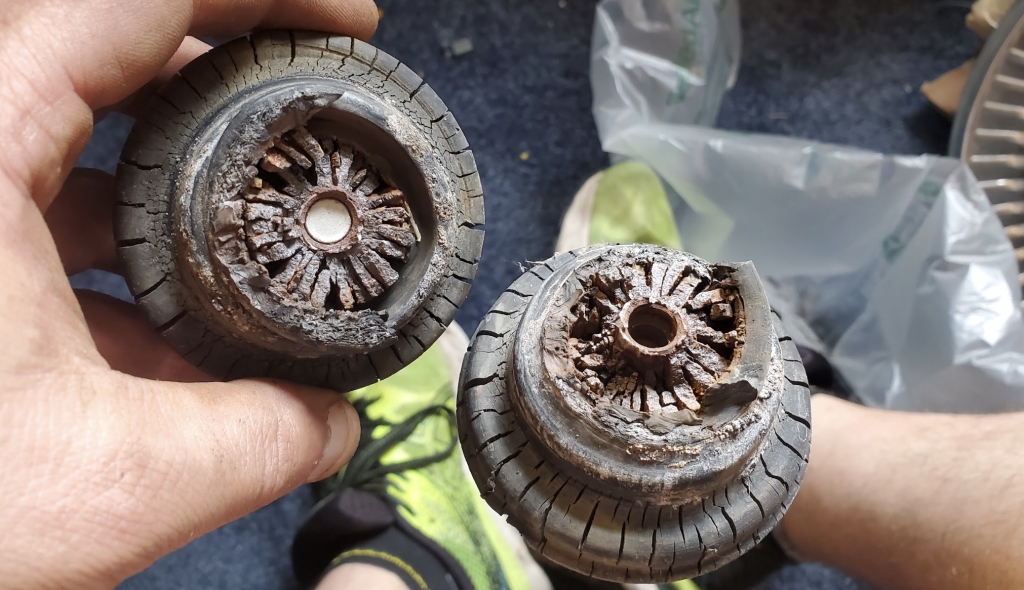 You can see that water and dirt somehow made its way between the two bushings, inside the hole in the rear wheel carrier/knuckle. Over time, rust just ate away at the steel until it was basically coarse, brown sand. This is just incredible (notice the end of the bolt; it’s in great shape!): 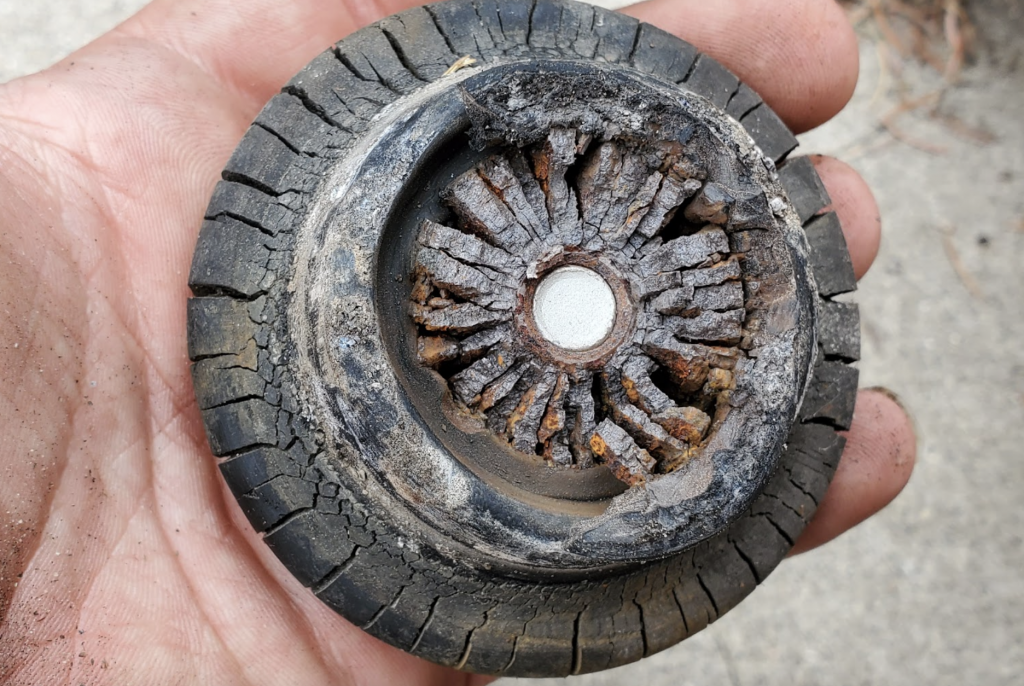 This, to me, is the scariest of vehicle failures — something that you cannot see. This horribly-rusted section of that trailing arm was wedged between some rubber bushings inside an aluminum rear knuckle, and there was really no easy way to detect it. Some of you may say “Well, the control arms themselves were coated in rust. You should have just replaced those,” but that’s just not how things work in the rust belt. If you replaced every control arm with rust on it, you wouldn’t be able to afford to drive; also, it’s wasteful.

The best thing one can do is become aware of the potential failure modes on their car. Do some research; see what types of issues people are having. Ask around on message boards, and I bet someone will tell you: “You might want to check between those bushings in your trailing arm. Those tend to rust there.” Knowledge is power. And safety.

I’m not entirely sure what to do about this Alero. It’s actually in decent shape overall, but this failure here means I’m going to slide underneath and take a very close look, not just at parts that appear rusty, but parts that could be hiding rust. From there, I’ll give my landlord a recommendation on if (and why) it’s finally time to ship the $1 Oldsmobile off to the great junkyard in the sky.

Rust-loving Jeep man, cofounder and EIC of The Autopian, Jason's friend. Email: david@autopian.com
Read All My Posts »
PrevPreviousBMW Tells Owners Of 83 Cars Not To Drive Them Over Risk Of Fiery Death
NextCoverage Of The Chinese Rocket That’s Crashing Back To Earth Gives Me Hope That The VW Beetle Is Still A Universal Unit Of MeasurementNext