While I was at the giant RV Open House in Indiana, I received news about one of the travel trailers in my immediate family’s fleet. Our 2007 Thor Adirondack 31BH has been a lovely camper, but water has been leaking in and causing costly damage. The walls are so rotten that they’re physically peeling away, and the floor is buckling. Here’s how much it’s going to cost to fix all of this.

If you somehow haven’t noticed by now, I’m a lifelong fan of travel trailers, motorhomes, and really any kind of vehicle designed to be a little house on wheels. I love the idea of being able to take a little bit of home with you. And you can sleep in places where there aren’t hotels and where conditions may be a bit too uncomfortable or dangerous to rough it in a tent.

I’m not alone in these feelings. Through generations, my family has owned all kinds of campers from Class A motorhomes to pop-up trailers. Much of my childhood was spent traveling the country in a conversion van towing a 1990s Salem travel trailer.

The camper had a major soft spot in its floor, a roof that had a visible leak during rain, and a sometimes faulty water heater. But we had a blast with that thing.

Ultimately, the water damage got too far, and an expert informed my family that the roof was in danger of falling in. I don’t remember exactly when this happened, but the cost to repair the roof was multiple times the value of the trailer. And thus, we went years traveling to hotels and cabins rather than camping. There was even a period when we rented RVs just to relive the experience.

That all changed in 2016, when my parents dragged home the Adirondack. This trailer was cooler than anything that we’ve owned before. 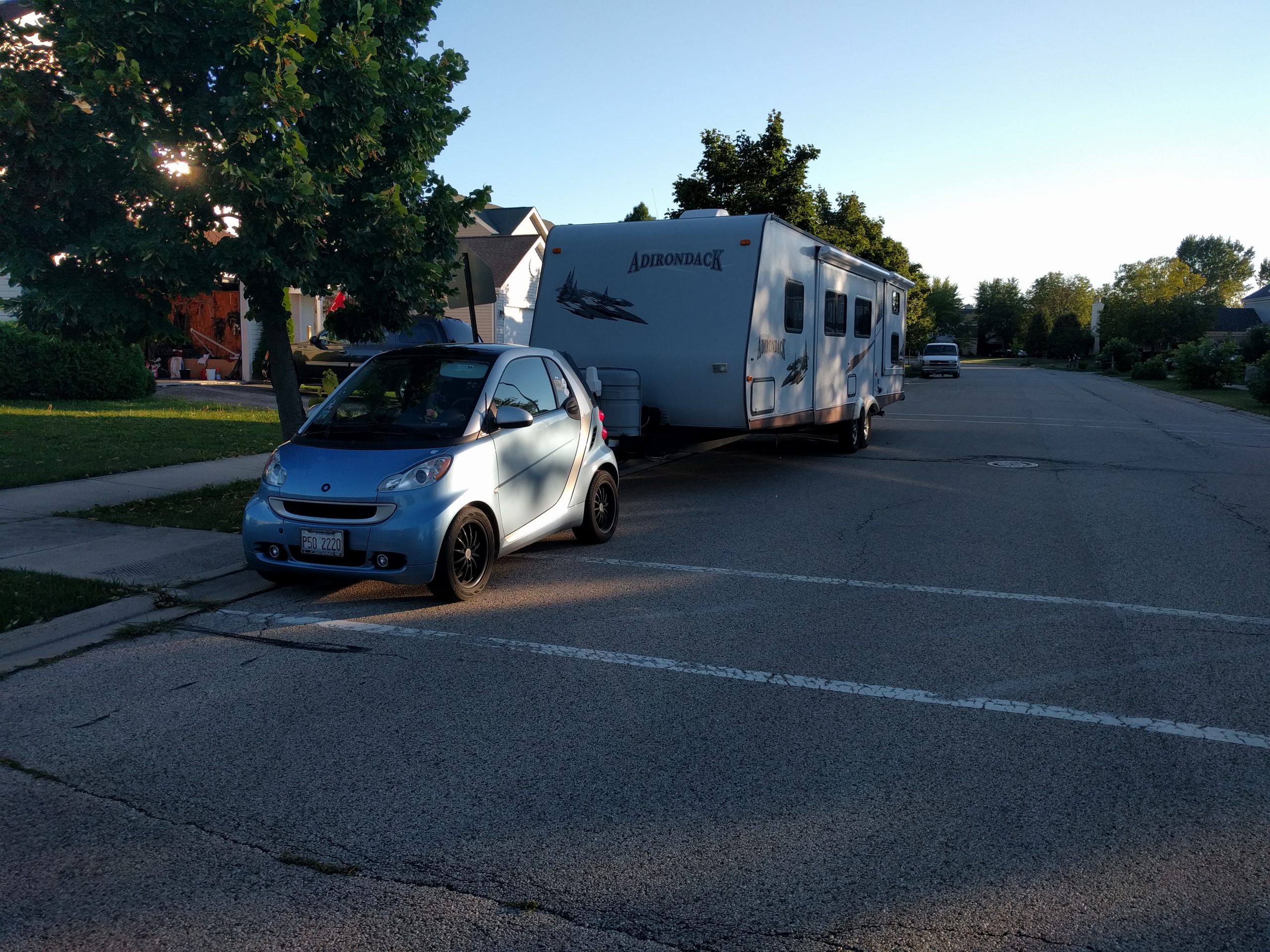 For some quick stats, this towable weighs in at 6,256 pounds, is a total of about 36 feet-long, and has two slides that expand it out into a pretty cozy space. This camper is so big that I had my own bedroom in it.

One of our first trips with it was to Sandusky, Ohio, where we set down at a campground and went to the Cedar Point theme park. There, I got to ride in the front seat in the Top Thrill Dragster, a roller coaster so fast that my hair was stuck in a blown-back position. I felt like I had been sitting in front of a Maxell sound system.

The trip was also fitting, because my family’s 2003 trip to Sandusky was one of the last that we were able to do before the old Salem’s roof failed.

Something concerned me about the Adirondack from our first day of ownership, and it was the bubbling of the camper’s outer skin up front and around the bathroom. This is a sign of delamination. But I was assured that such wasn’t the case. 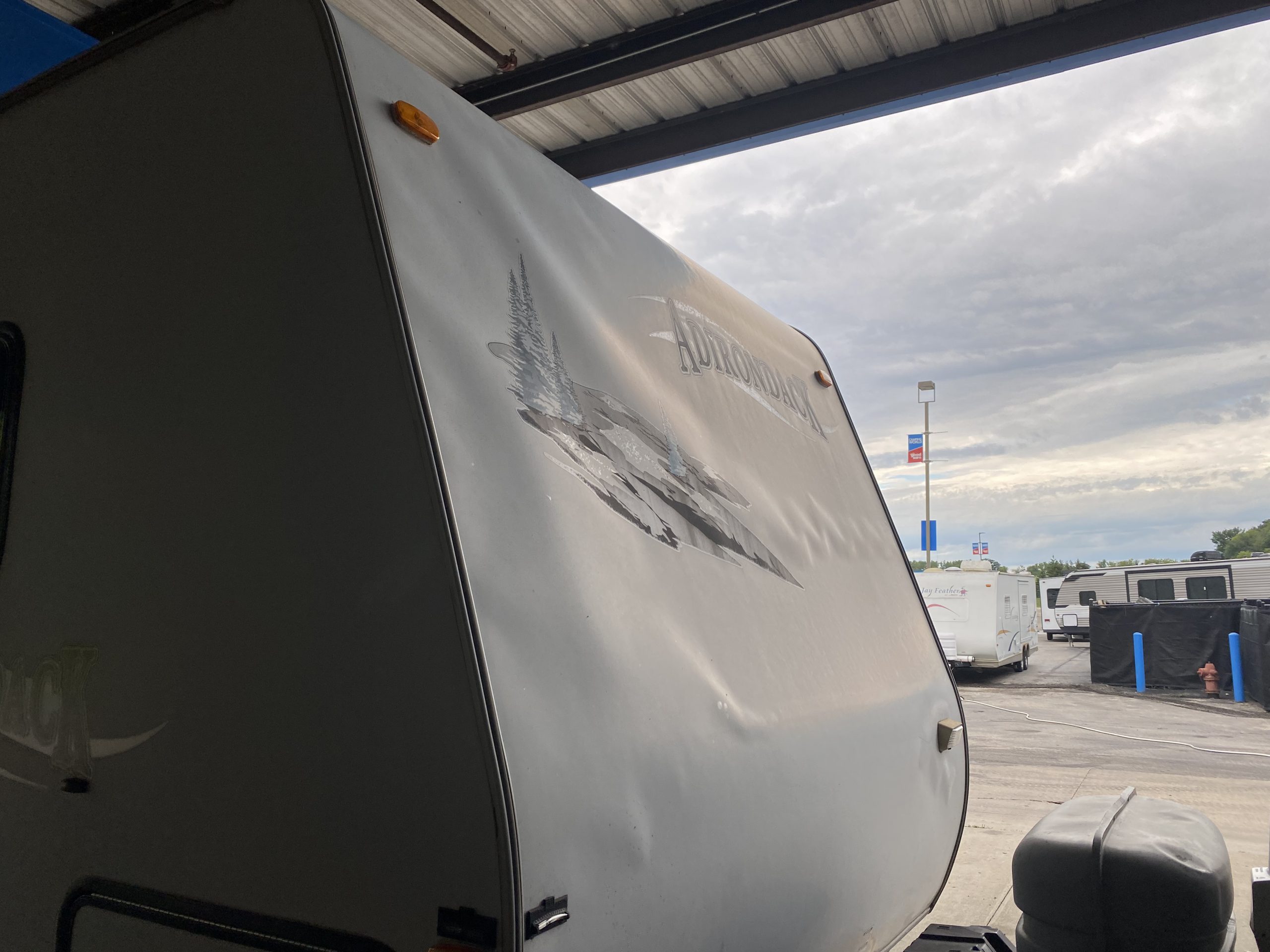 To understand what’s going on here, you should probably know what RV walls are commonly made of. I’ll let RV Life explain:

Aluminum siding used to be the de facto choice for RV manufacturers, but most have switched to fiberglass siding because of its durability, lightweight properties, and lower overall cost. RV walls are also easier to produce and install.

They’re built like a sandwich; the exterior fiberglass and interior decorative walls are the “bread,” and in-between contains the “meat,” which is two layers of wood and Styrofoam. These materials are vacuum bonded to each other, then the “bread” in order to serve as backing reinforcements.

Those layers of wood often consist of thin lauan, a tropical plywood product also called luan. And when you see the outer skin bubbling away from the luan? It’s a sign that something horrible has been happening, likely for a long time before you even noticed.

As RV repair shop Coach Specialists of Texas notes, water leaks are a common cause of the outer skin delaminating from the luan. Water gets in from a leak at a seam, or perhaps damage from a life of living outdoors. At first, water damage causes cracking in the wall, but the part that you can see looks fine.

The shop goes on to note that by the time that you notice that something is amiss–the bubbling of the outer skin, bowing of inner walls, or soft floors–the damage had likely already been occurring for years. 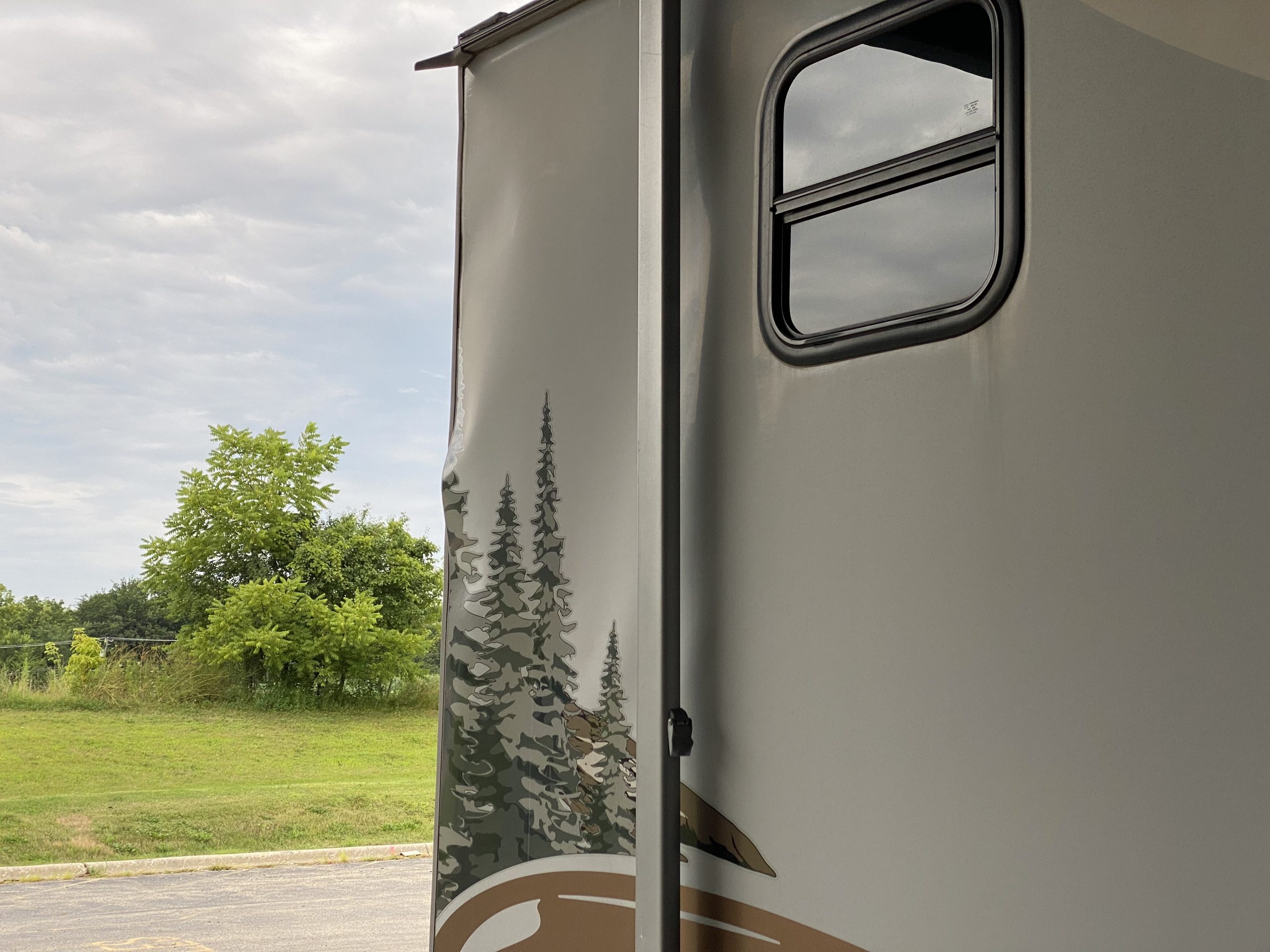 So when I saw the Adirondack for the first time and noticed the bubbling? Yep, that was damage likely years in the making. And my family isn’t alone. Search RV forums and you’ll find many stories about campers from this era struggling with delamination issues.

But for whatever reason, the dealership that sold my parents this trailer said that the bubbles were normal and nothing to worry about. We continued to camp in this trailer until 2020, when the bubbles got much larger and the floor in the rear of the trailer suddenly got really soft. My fear back in 2016 turned into reality. 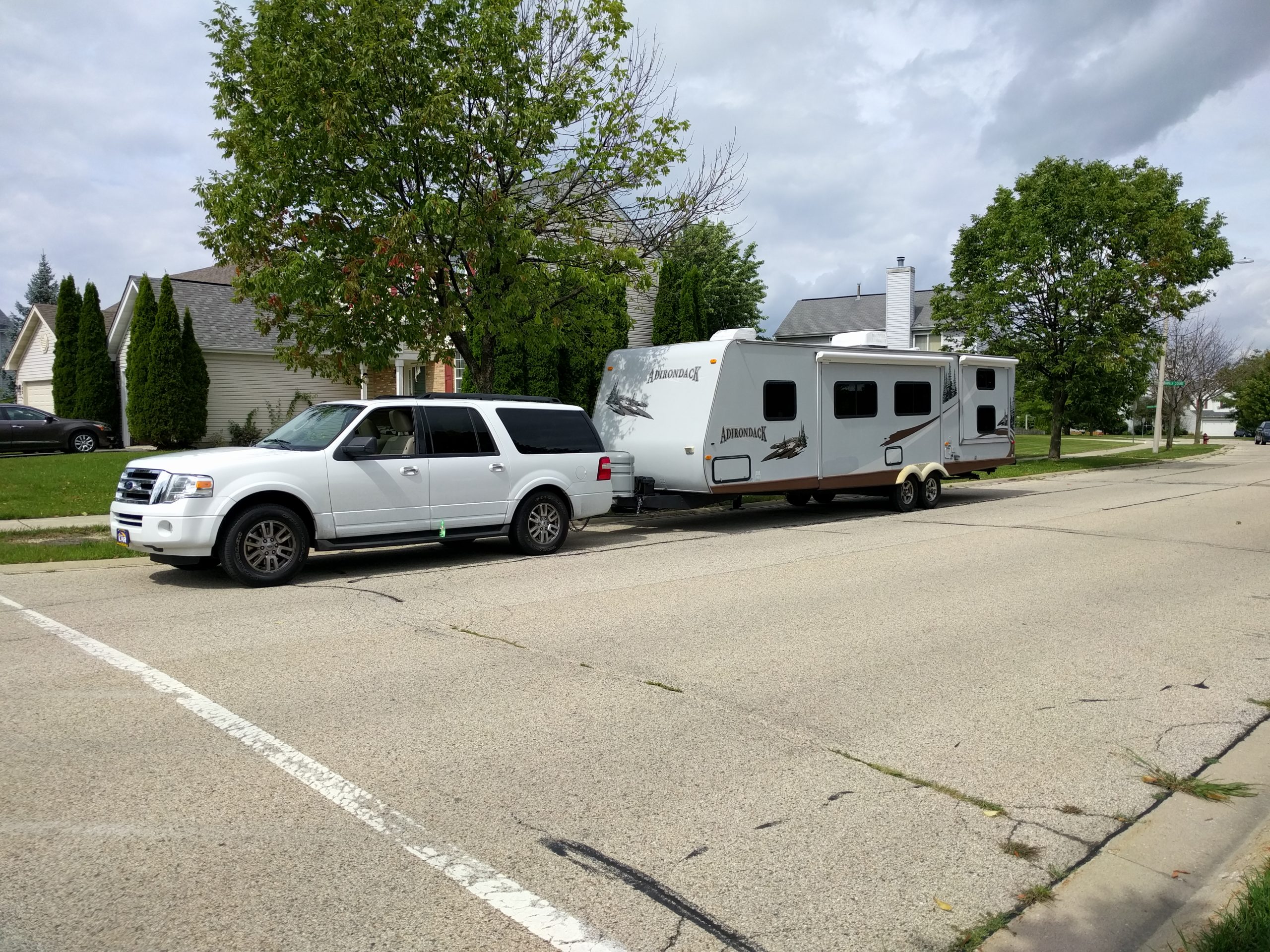 My parents expected the cost to repair the trailer to be a fortune, and decided to replace it with a 2022 Heartland Mallard M33, a camper that’s two feet longer, 1,500 pounds heavier, and already falling apart.

Thankfully, the story of the Adirondack isn’t ending with the water damage and my family is getting it fixed. That process started this year, when the water damage had progressed so much that the outer skin began peeling away from the luan. Under the ruined skin sat destroyed plywood. This stuff basically fell apart in your hand and apparently made for a nice home for spiders. 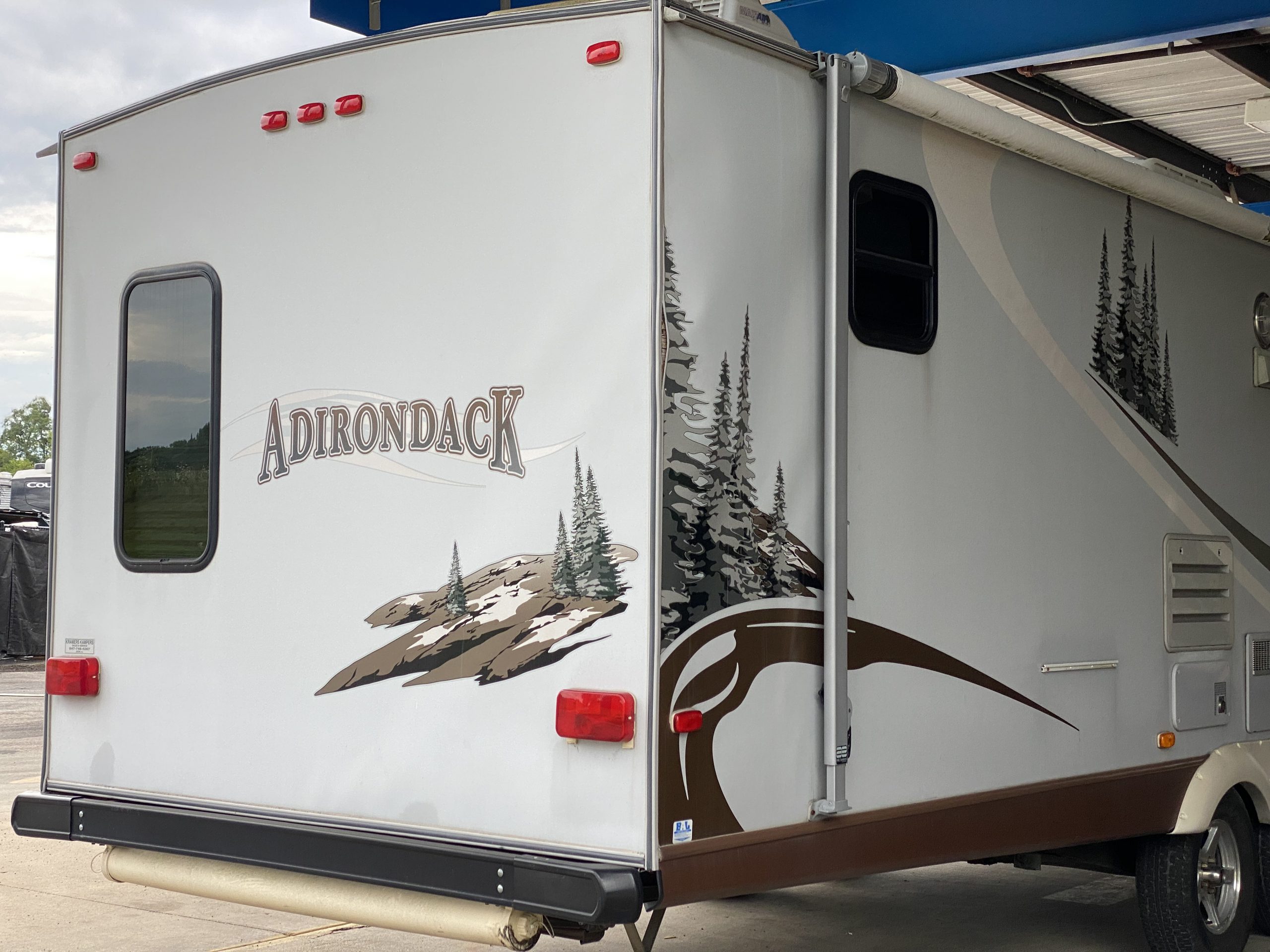 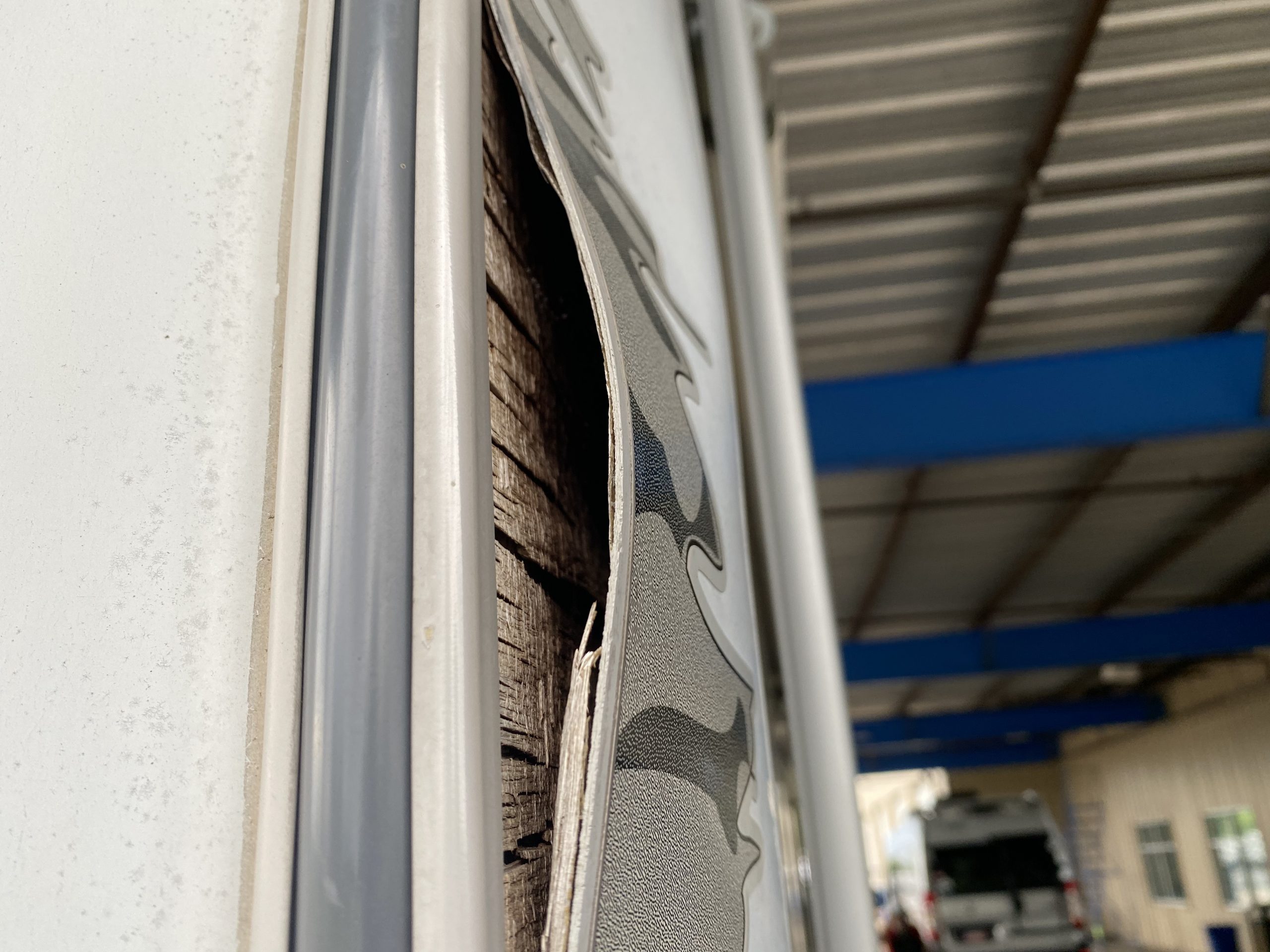 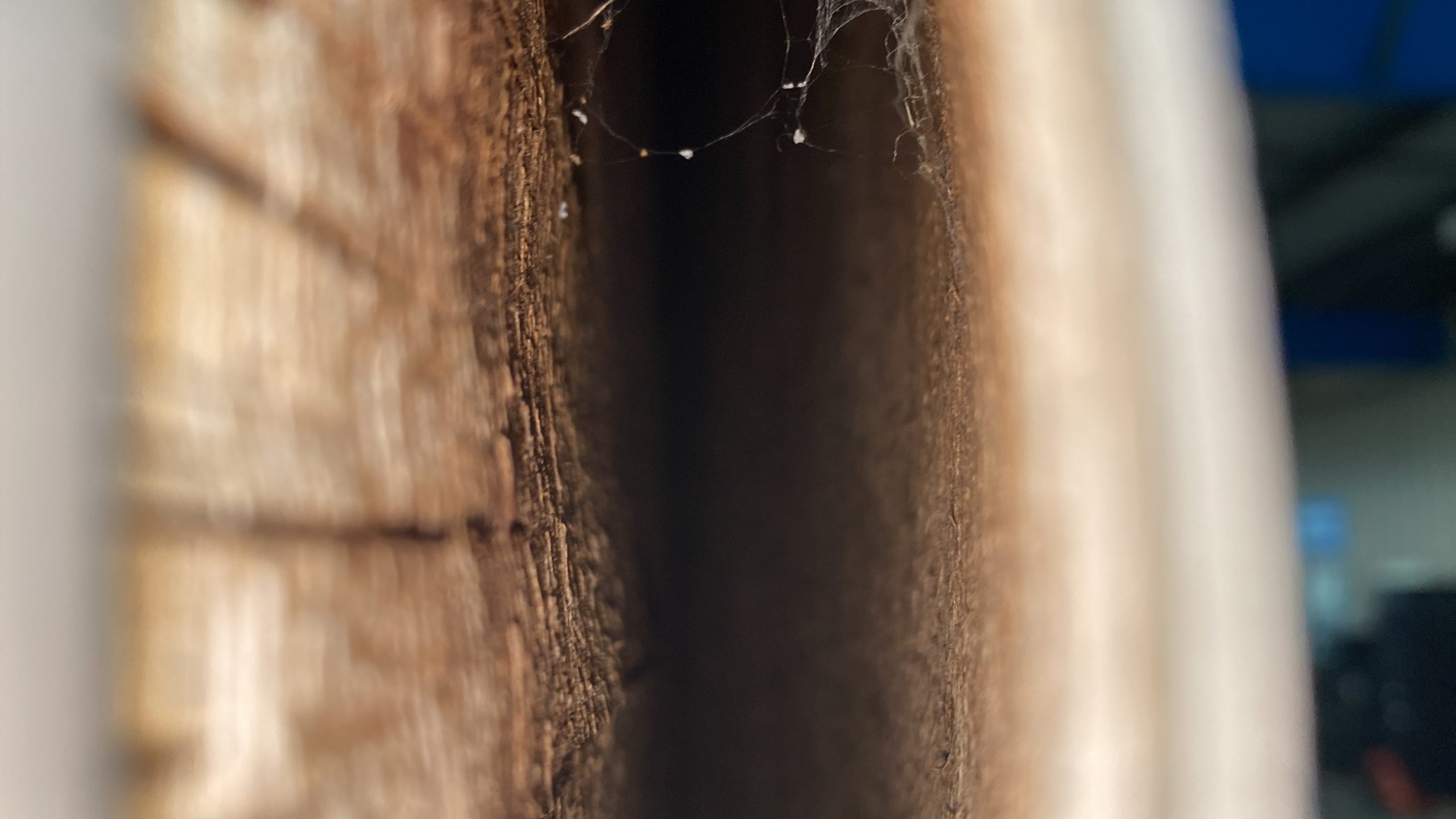 The Adirondack’s floor consists of multiple wooden panels. The panel covering the last fifteen feet or so of the trailer goes from the rear of the kitchen to the back wall, and supports the bathroom, my bedroom, and some of the kitchen. At first, this floor was sort of soft, and specifically in the bathroom. This progressed until it got to the point where you felt like you’re about to fall through the floor.

The last time that I went inside of the trailer, the floor went from being really soft to really soft, accompanied with the sounds and feeling of wood breaking beneath your feet. 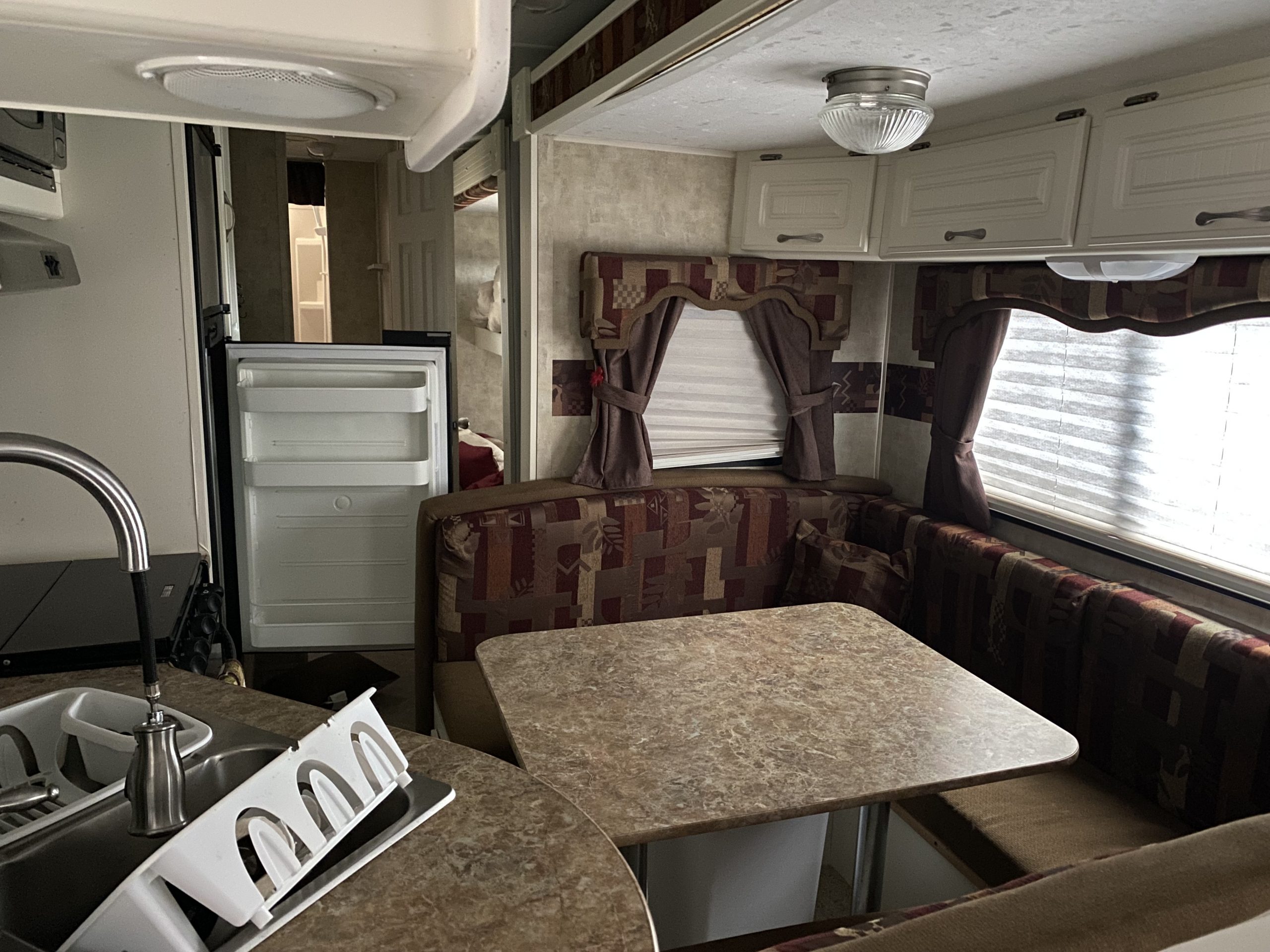 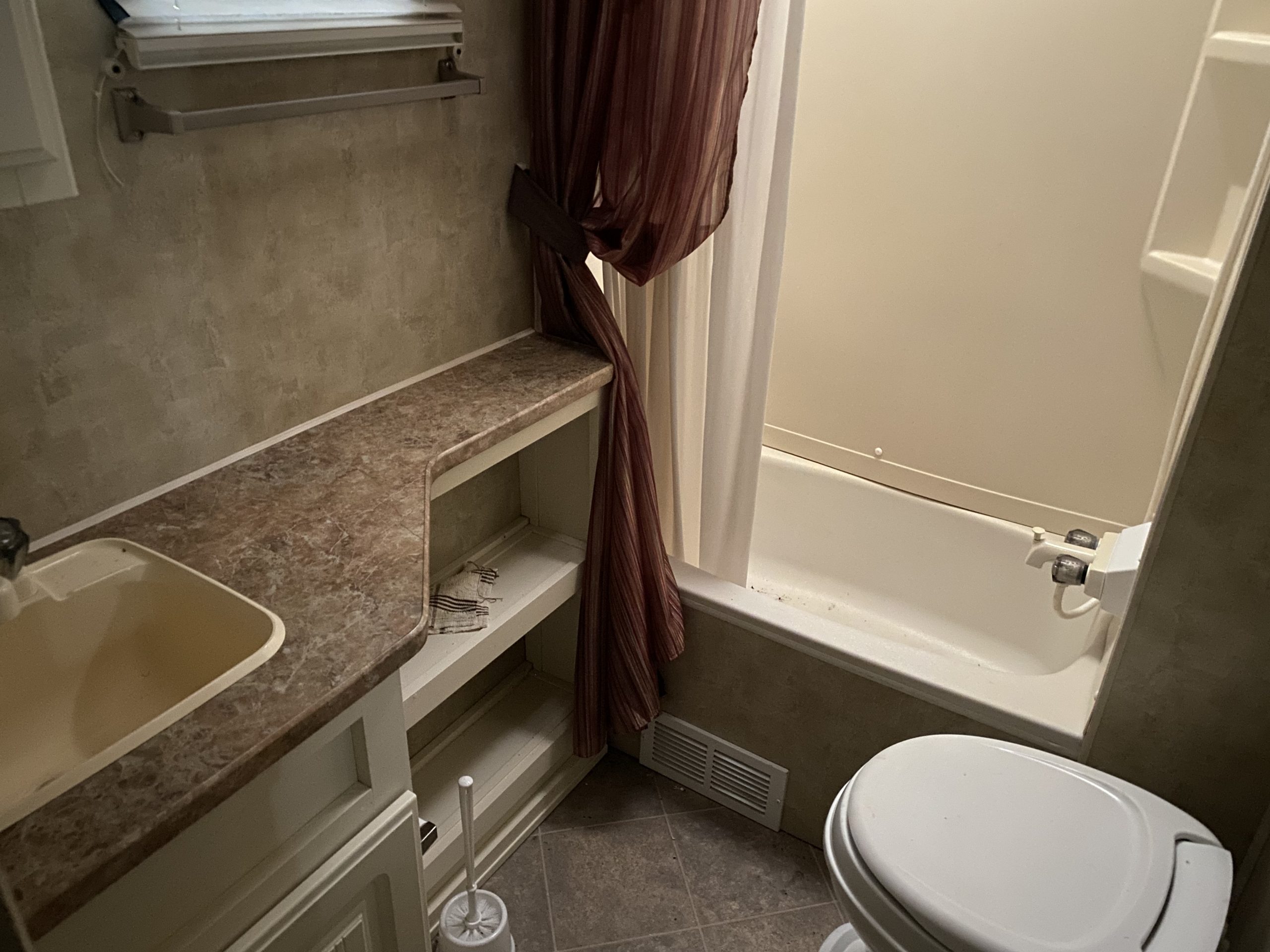 And this covered the whole length of that rear floor panel. Every step that I took resulted in the sounds of splintering wood followed by the floor sinking a little. I pictured myself falling through, meeting the black tank on the way down. That was enough for me to reverse course.

How Did This Happen? 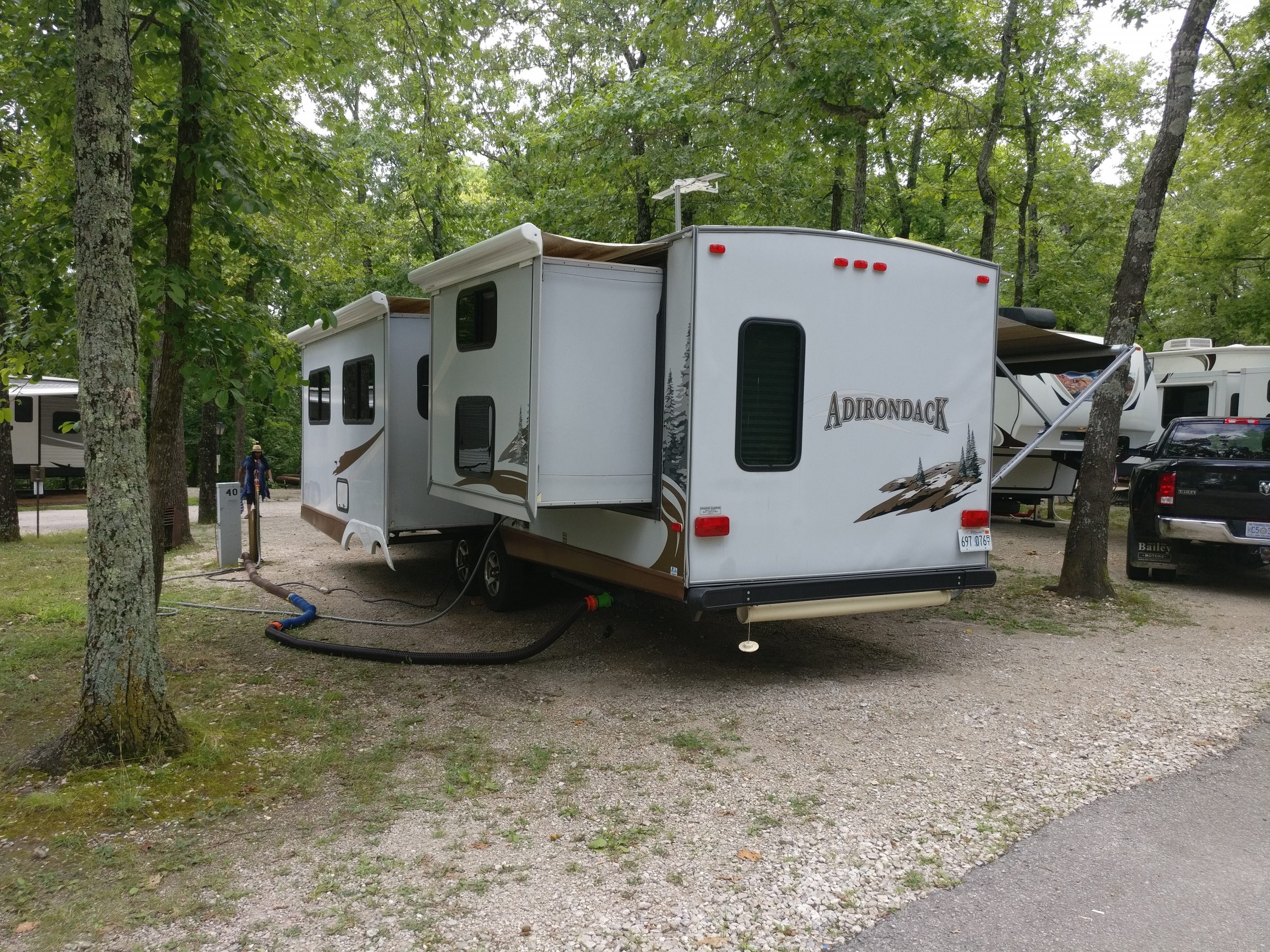 The trailer has been in the hands of a service center since the beginning of August, and little by little, they’re bringing the trailer back into its prime. A technician’s explanation is that the shower’s skylight sprung a leak, likely many years ago. Water collected in the walls and around the floor, behind what you could see without tearing down the bathroom. The leak, combined with humidity, worked a number on the camper for a long time. And as the trailer endured in the Midwest, the damage spread outside of the bathroom unit.

Up front, a leaky seam seal is to blame for the delamination. Thankfully, it was caught in enough time that water hadn’t gotten to the front floor yet. 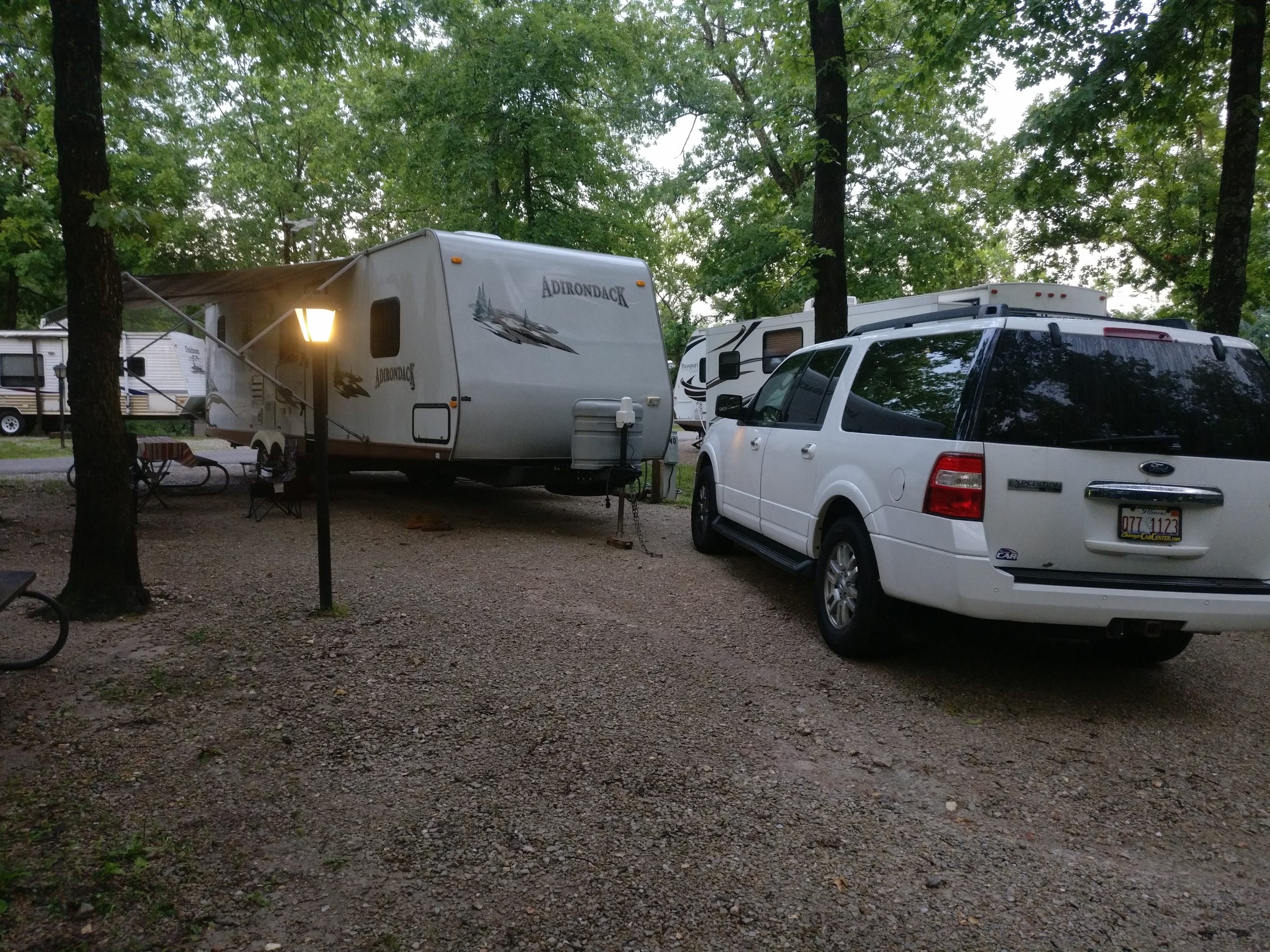 Thankfully, this can be fixed and thus far, it’s not outrageously expensive. The bathroom wall has been replaced and the skylight sealed for just $700. And the estimate for the floor replacement is $7,000.

Of course, the price can still balloon from there as the service center finds and fixes any other damage, including the front wall and the disintegrating awning. My parents don’t remember what they originally paid for the unit, but they believe it was somewhere around $27,000.

When the repairs are complete, my parents plan on keeping it in the family for my brother and I to use. Amusingly, it’ll also mean that they have two long, heavy campers on hand, so if one is broken, at least the other will still be there. 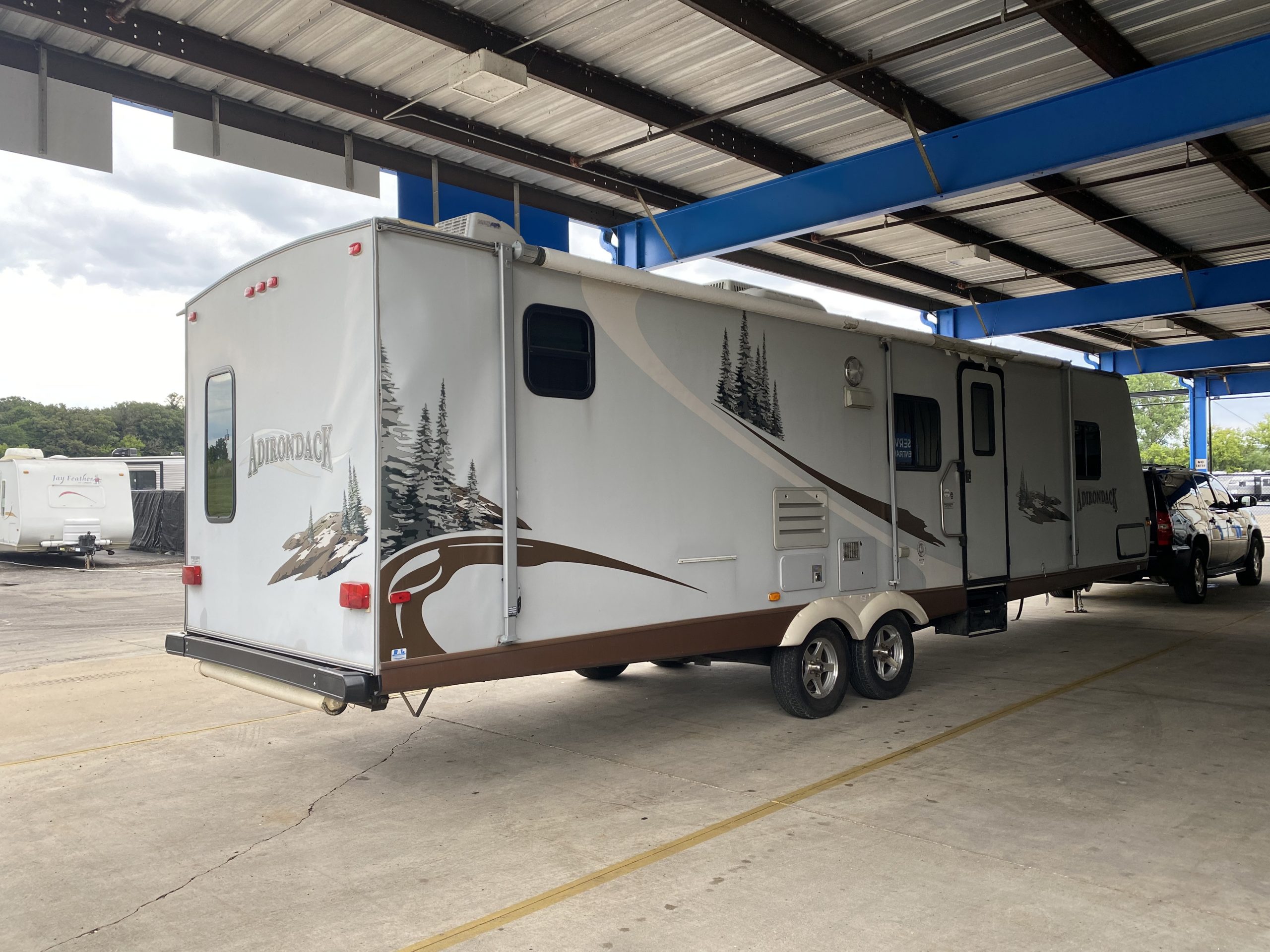 Mercedes is a lifelong fan of all things powered by an engine. When she isn't driving one of her five Smart Fortwos or her 14 other vehicles she could be found in the cockpit of a Cessna 172 or perhaps swimming in any body of water that she could find. She also has a deep love for buses of all kinds. Please send her buses. mercedes@theautopian.com Instagram: @mistymotors Twitter: @Miss_Mercedes30 Facebook.com/neonspinnazz
Read All My Posts »
PrevPreviousSee The Evolution Of Nissan Through The Incredible Cars Brought To The Tokyo Motor Show Over The Years
NextThe Citroën Oli Concept Is An EV Made From Cardboard And Good IdeasNext