In an uncertain world, it’s hard to find constants that you can cling to, some sort of anchor of consistency that you can rely on. I think if there’s anything the past century has taught us, it’s that the French carmaker Citroën will always find some way to be cleverly and delightfully bonkers. They’ve delivered yet again, this time with a new concept car called Oli that seems to be the one of the vanishingly few modern EV concepts to push back on the idea that an EV has to be a big, heavy, ultra-fast, ultra-luxurious, tech-slathered behemoth that can do anything, but, in reality, won’t. The Oli is light, kinda slowish, but radically innovative, efficient, useful, and, if you ask me, fun. Let’s look at this thing. 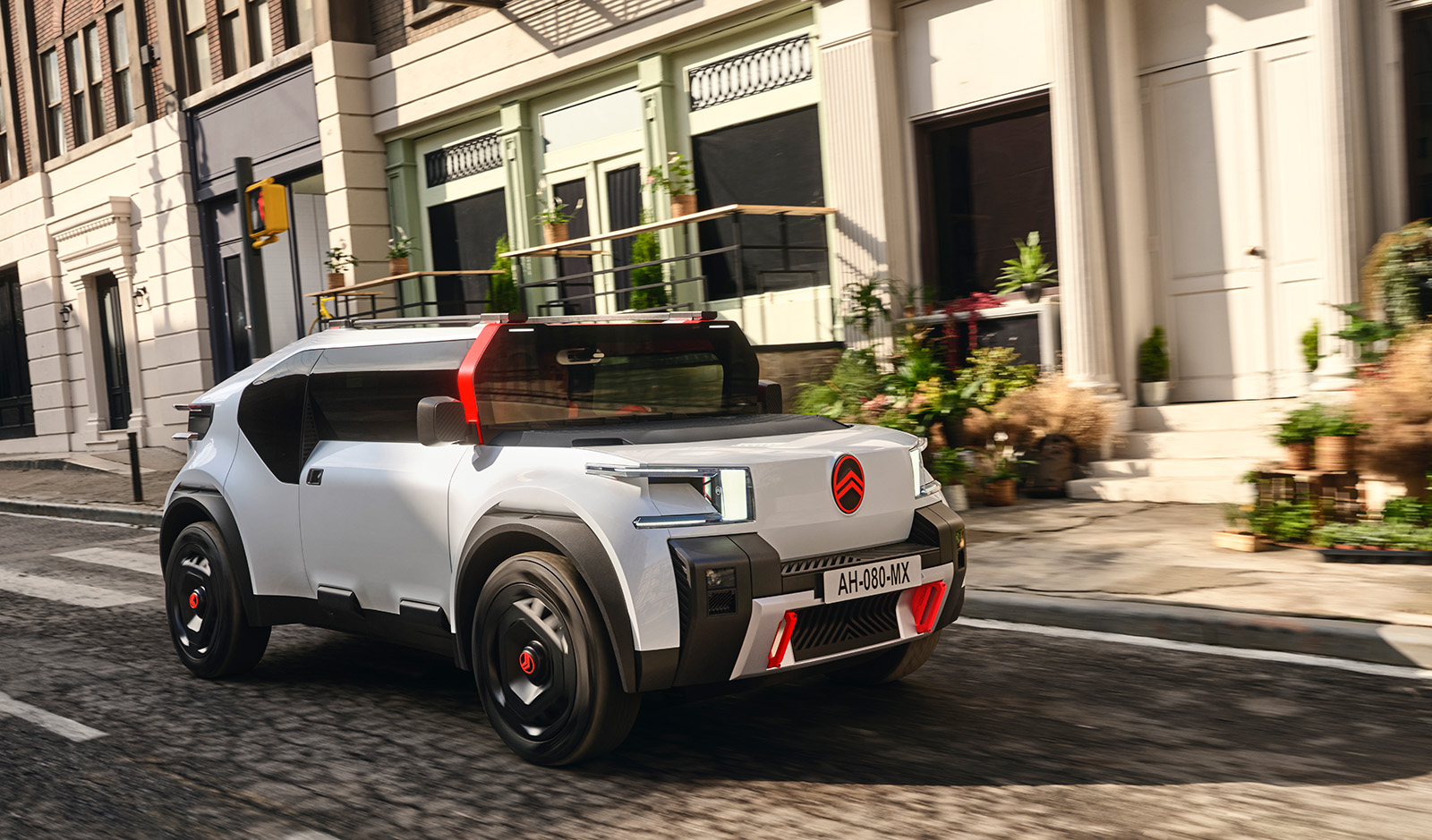 Holy crap, right? Just look at it: yes, that’s an unashamedly vertical windshield. Bad for aero, sure, but who gives a shit when most of your driving is at city speeds? This thing is only designed to go 68 mph (fast enough for a road trip) and that flat windshield actually saves a ton of weight and material, which helps make up for the fact that it’s a big middle finger to the wind. Plus, Citroën’s press release also makes this interesting point:

“As well as reducing weight and complexity, the smaller screen is less expensive to produce or replace and lessens the exposure of occupants to the effects of the sun. It is also estimated to help reduce the power demand oli’s modest air conditioning system would make on its batteries by up to 17%.”

Like a Nash Metropolitan, the doors are interchangeable on each side (well, the handle needs to be re-loacted, but still.) Same goes for the front and rear bumpers – damn, it feels like old-school AMC up in here. Speaking of old-school, check out the Citroën double-chevron logo inset in that oval; it looks like something that hasn’t really been on Citroëns since about 1955: 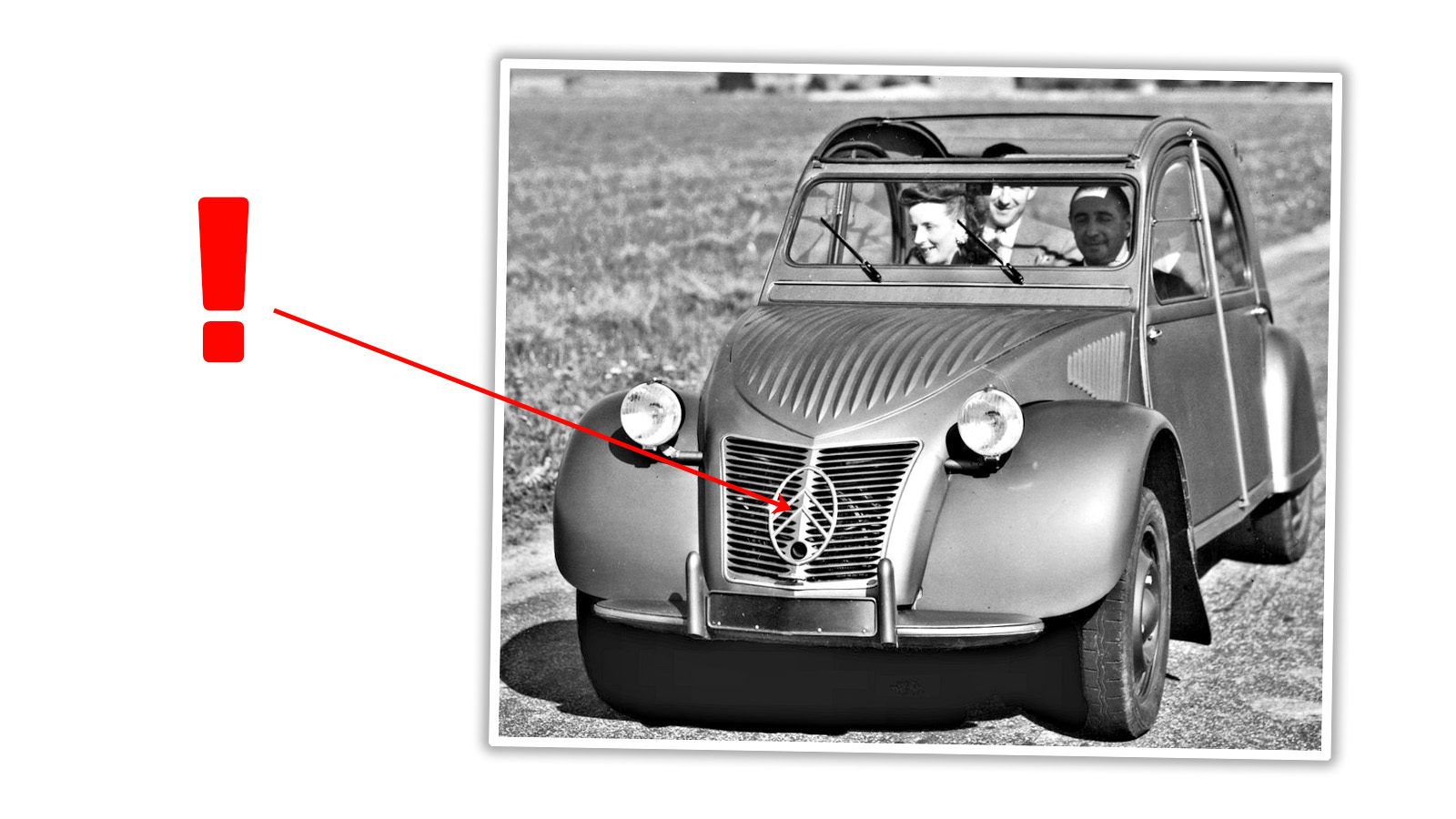 That 2CV there is actually a very good spiritual template for the Oli, as they both share a fundamental no-bullshit, what’s-the-minimum-you-need-to-get-the-job-done mentality. That’s why the Oli, at only about 2,200 pounds – easily half what the average modern EV weighs –only needs a 40 kWh battery to squeeze out a range of about 250 miles, and that smaller battery pack should be able to charge from 20% to 80% in 23 minutes, at least according to the press release.

Some of the big flat body panels on this thing are made from recycled cardboard. That sounds pretty flimsy, but it looks like it’s not, you know, the same crap you’re jumping on before flinging into a dumpster:

“Made from recycled corrugated cardboard formed into a honeycomb sandwich structure between fiberglass reinforcing panels, they have been co-created with partner BASF. They are coated in Elastoflex® Polyurethane resin covered in a protective layer of tough, textured Elastocoat®, which is often used on parking decks or loading ramps, and painted with innovative, waterborne BASF R-M Agilis® paint.

The panels are very rigid, light and strong – so strong that an adult can stand on them – and weight is reduced by 50 percent when compared to an equivalent steel roof construction. Their versatility and durability open up a world of possibilities for owners to enjoy work and recreation.”

Those panels are used on the hood, roof, and, yes, in a sort of pickup bed, because this thing isn’t just your usual hatchback. There’s a load bed that’s over three feet wide and two feet long that can transform, by folding the rear headrests into the roof and opening the rear glass, into a load bed that’s almost three and a half feet long. Not full truck size, sure, but plenty usable, and there’s an enclosed trunk underneath that. 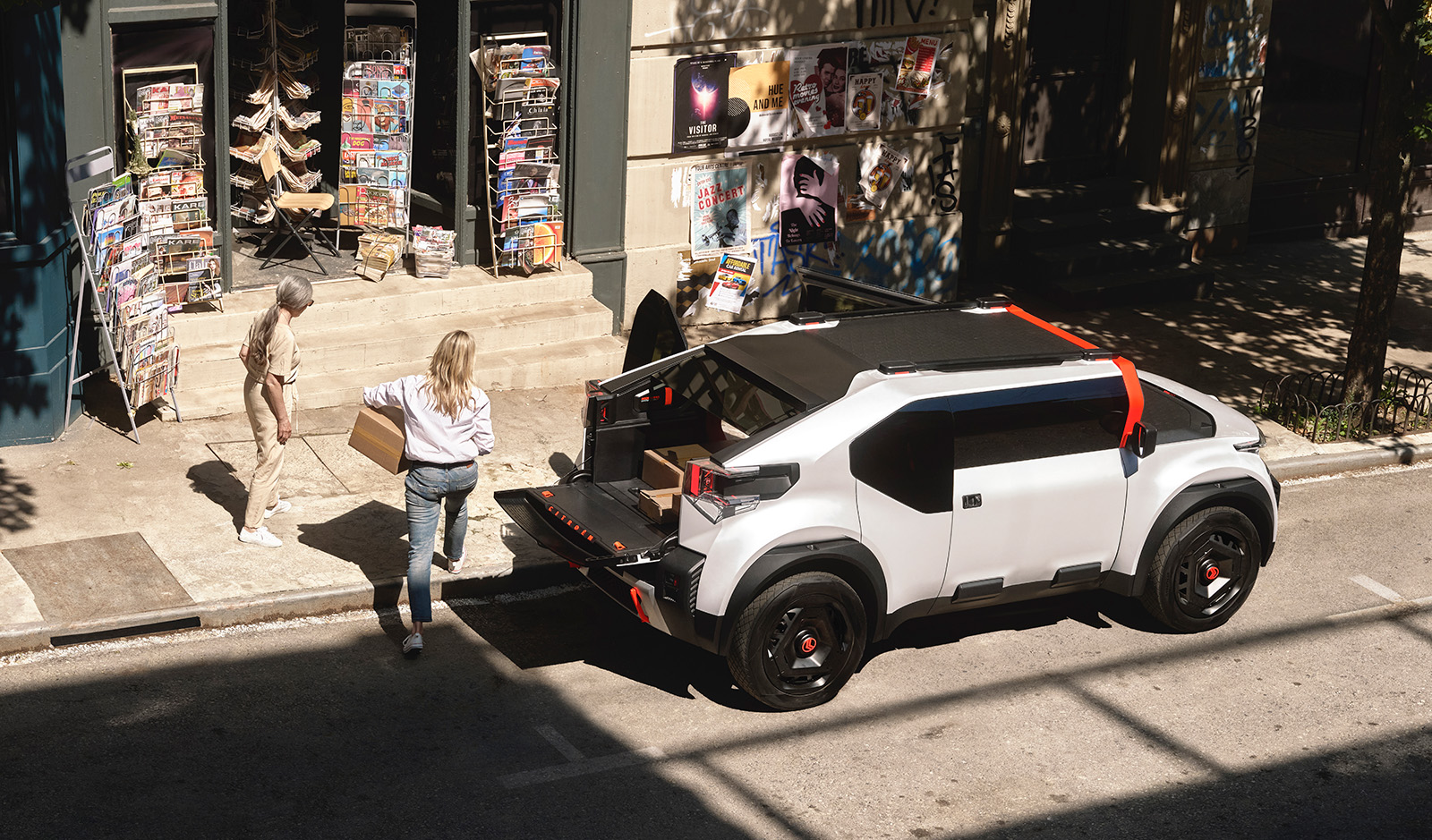 The inside is minimal and clever, too, with front seats that use only eight parts, and everything is 100% recycled thermoplastics. I’m not sure exactly what’s going on with what looks like a forest of golf tees on the dash there, but it seems they’re flexible and designed to hold drink cans and stuff like that. 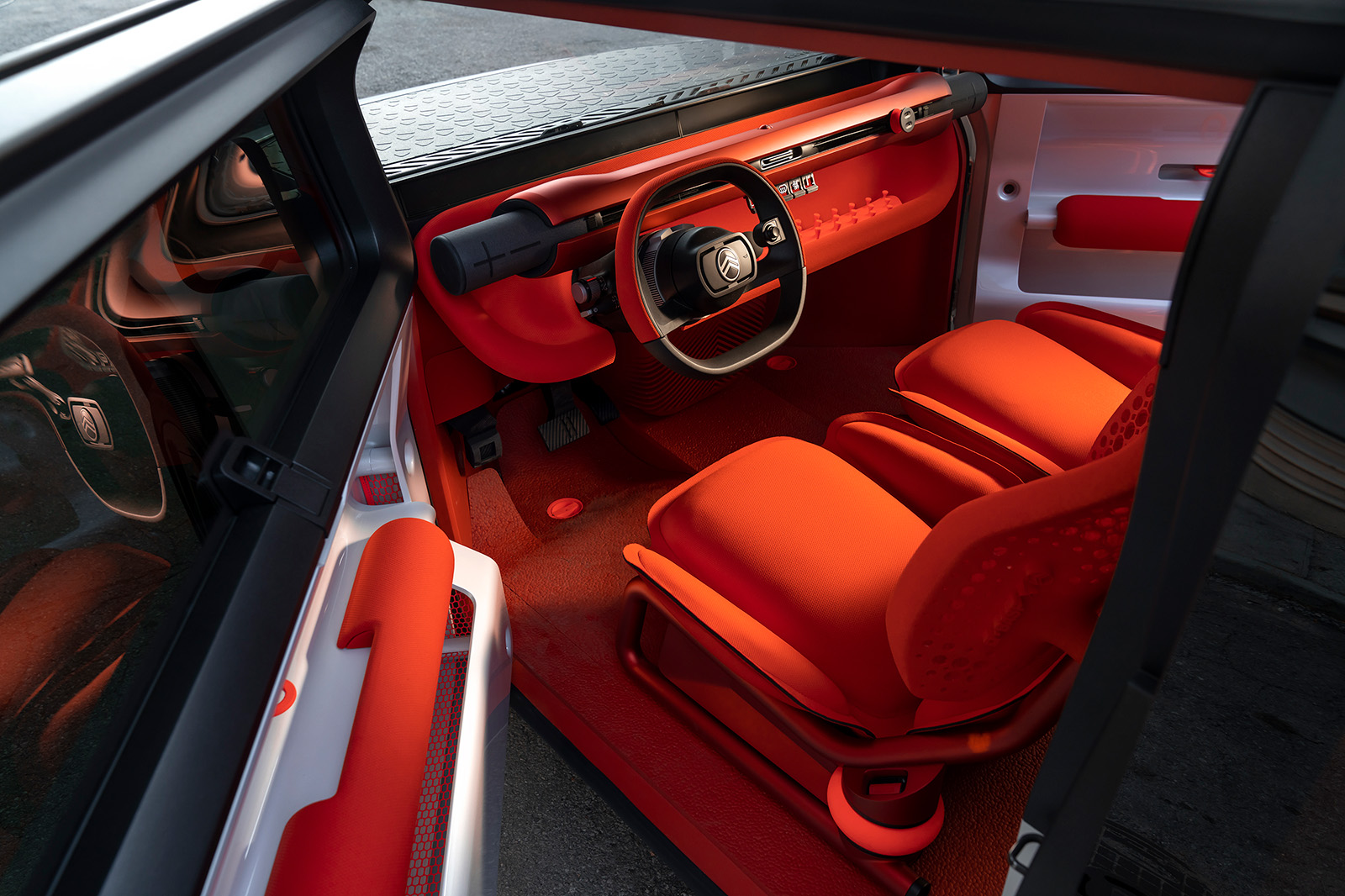 There’s no integrated screens or anything like that because Citroën just figures you can dock your own computer you have on you at all times, anyway: your phone. Also interesting is the use of an off-the-shelf game console joystick: 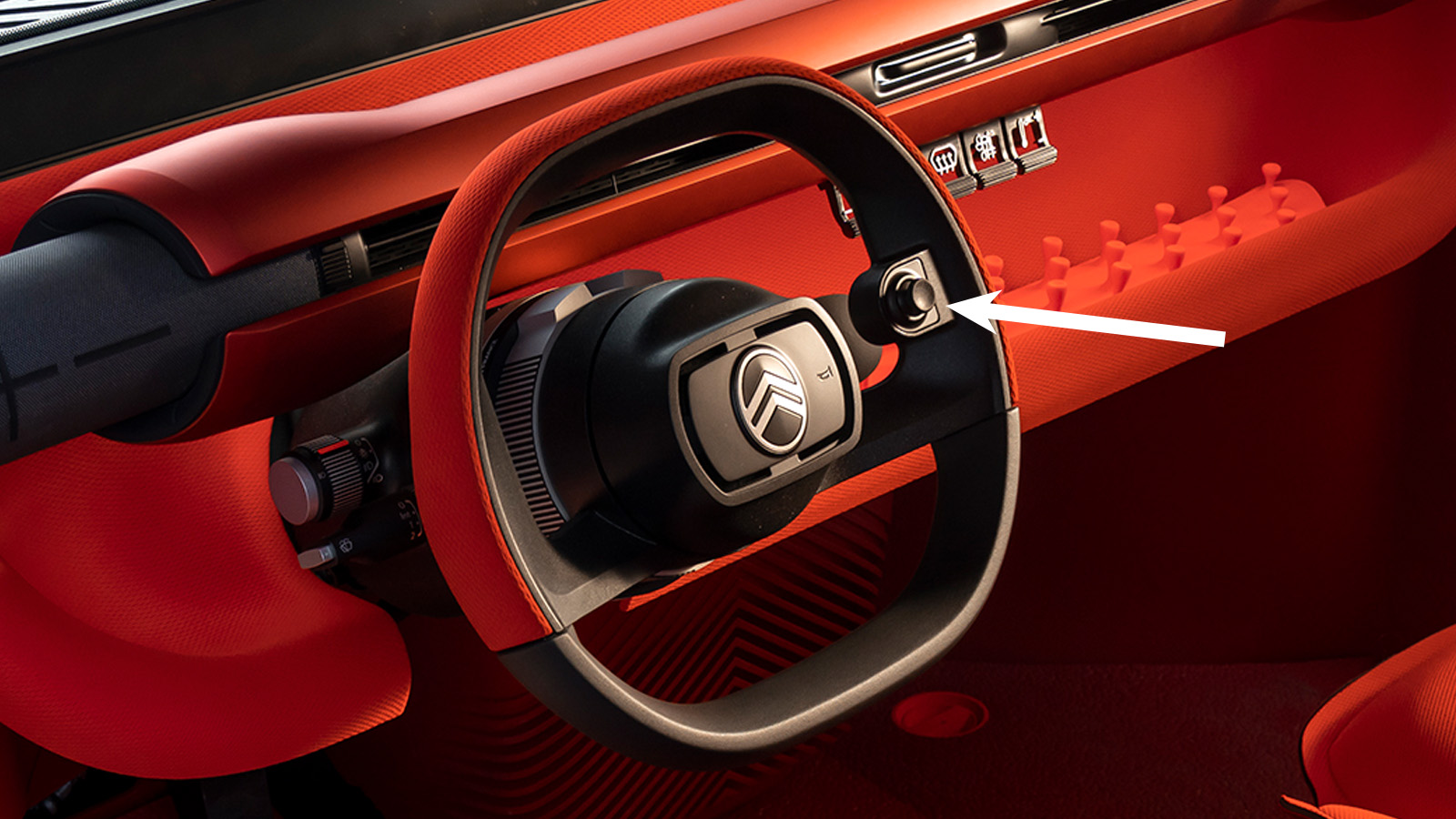 I know this is very much a concept car, and not something likely to be produced like this, but it’s so crammed full of good ideas, and, more importantly, a fundamental concept that’s sorely missing from modern EVs: less is more.

Not every EV needs to get to 60 mph in 2.3 seconds or needs to be crammed full of computers and so luxurious that it takes a colossal battery to get any sort of decent range and then you’ve got a 5,000 behemoth before you know it, and that’s just ridiculous.

Cars like this Oli show that you can design a useful, practical, fun and novel SUV that doesn’t have to end up with a gravitational pull of a small moon.

One other thing that was mentioned in this press release that I feel like I almost never hear about is how the car will age and be to own and repair:

“A key element of the oli story is how it has been conceived with longevity to create its own circular economy. It shows how a vehicle can be easily and affordably reinvented for several subsequent lives with new owners using refurbished parts, new décors or colours, and even upgraded parts over time.

Overall cost of ownership will be low, but if there is a need to replace a door, headlamp or bumper, recycled parts could be sourced responsibly via Citroën from other oli vehicles that are no longer serviceable.

Logically, if it costs more to refurbish a vehicle than to buy a new one, vehicles won’t be refurbished. oli changes this – it be more environmentally and economically positive to refurbish than replace over several lifecycles. When no longer economical to refurbish, Citroën would turn each oli into a recycled parts donor for others requiring parts or send other parts for general recycling.”

Is this suggesting some sort of dealer-run junkyards? At the very least I’m excited to hear any automaker discussing parts replacement in such an easy, modular way.

I’m all for cars like this. I’m sick of big-ass, heavy, overdone SUVs that need more of absolutely everything – time, power, exotic materials, egos, whatever. Give me something light and tough and as flexible as a Swiss Army knife, and if it looks gleefully weird, all the better.

I'm a co-founder of the Autopian, the site you're on RIGHT NOW! I'm here to talk to you about taillights until you cry and beg me to stop, which I absolutely will not. Sorry. Hug? Also, David's friend.
Read All My Posts »
PrevPreviousMy Camper Has So Much Water Damage That The Walls Are Falling Apart And The Floor Split Beneath My Feet
NextElon Musk Tweets That Cybertruck Will Have A Feature That VW Beetles Had Over 80 Years AgoNext