Many Americans are looking at alternative ways to enter the motorhome market, and converting old commercial vehicles seems to be one popular route. We’ve talked about ambulances and hearses as possible starting points, and our own Mercedes has an RTS transit bus that she once contemplated turning into a recreational vehicle. Ideally, you’ll find a reasonable not-too-beat example of a used bus or truck, strip out the interior, and then…what? Well, you’ve got mad carpentry skills, right? You know electrical and plumbing tricks? Let’s say, for the sake of argument, that you don’t. I’ve come up with a modular camper component system that makes building your own RV easier.

At the Autopian, we embrace all forms of transportation, and with the surge of interest in recreational vehicle we’ve been sure to post daily on the latest and greatest models available. Sadly, for most of us, reading about one of these new motorhomes is akin to looking at articles about some hypercar; we’re learning about something that is essentially unobtainable to us. New motorhomes were never cheap, and they are now getting stratospheric. Honestly, even if our camper superfan writer Mercedes Streeter had $150,000 sitting around she’d probably spend it on something more logical than one of these new campers, choosing instead to buy up every remaining VW Phaeton and Smart Fortwo left in the United States with that money (she might actually have change left after that). [Mercedes’ Note: I’d also probably try to import a Smart Crossblade, buy a GM New Look bus, buy an Indian FTR, and maybe sneak in an Audi A2.]

If you’re looking to build out your own camper, you might suddenly become overwhelmed. Tearing out seats and other bits from a vehicle’s past life are easy. But how do you turn a bus, truck, or van from an empty space into a cozy home? If you don’t know how to do any of this yourself, you’re sort of left paying someone to do it for you, which erases some of the cost benefits of building your own camper.

For those without YouTube maker-level abilities, there are options appearing on the market. As we’ve reported on before, VanLab offer a system for small to large vans. These are flat-pack-style kits that help you assemble a camper van like it’s an IKEA product. But these are made for a few van models, and leave bathroom facilities up to you. 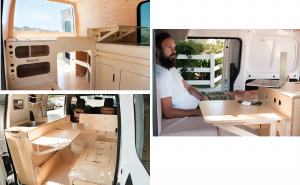 There is also Happier Camper with its Adaptiv modular system that helps you build a van like it’s a Lego set. The modules offer seating, sleeping, and kitchen applications, but still no bath or shower options. It’s yet not in production, either, and it’s unclear what vehicles it will work for. 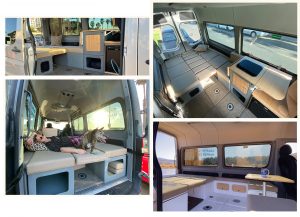 But what if hipster van life isn’t for you; what if you neither have a beard nor have the yoga-acquired dexterity needed to inhabit cramped little boxes? Maybe you want or need a larger motorhome with all of the home-away-from-home niceties? Or maybe you have a van that isn’t a Mercedes-Benz Sprinter, Nissan NV200, or a Ford Transit? She could be wrong, but RV PhD Mercedes says that there really isn’t anything readily available now for those applications.

What if there were a fix for this? Larger scale components for bigger vehicles?

Let’s pretend that I developed a system, and she acted like a boss mogul similar to DeLorean (bad example) or Bricklin (worse example) and got the components manufactured. These parts could be applied to any random retired commercial vehicle, such a shuttle that used to drag people from DFW arrivals to get into their shitty rental Chevy Aveo. A Hertz bus is as good a vehicle as any to start with for Streeter Recreational Vehicle Components to use a demonstrator. 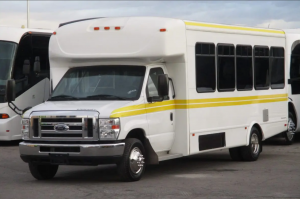 Streeter RVC would offer a choice of modules to convert any van, bus or truck. The modules for this program could be flat-pack style and easily assembled (and built in the bus if they are too big to fit through the doors assembled). The components would be around six feet tall to fit most vehicles, and side panels and bath modules around eight feet in height could be cut to size to blend in the with height and side-wall shape of whatever vehicle you’re converting. The bath and shower modules would be cut down to height, and a water barrier added for the outside wall and top. 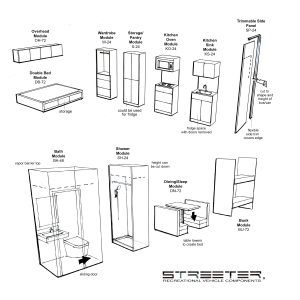 Note that the kit would provide a rubber or neoprene molding that goes around the cut edges of the side panels, which not only allows the panels to fit snugly against the side of the vehicle, but also means you can cut the panels to shape and even your nasty-ass Sawzall cut edges will be covered up.

Electrical connections could be simple between modules, and note that the modules being shorter than the ceiling means that lights could be mounted on top aiming up to create an aircraft-style “cove lighting” effect.

Modules are made in two, three, or four foot increments to allow for easy space-planning. I’ve heard of people spending years making custom interiors for motorhomes, while using kit components like this could be done in a few weekends. Plumbing options would be provided for simple installation.

You’re in, right? How would it work?

1.) Measure the stripped-out interior of your vehicle, including height. Make note of wheel wells so the system can alert you.

2.) Go to www.streeterrvc.com (you know this is fake, right? You aren’t really clicking on it, are you?), put in your floor dimensions, choose the items and configure your space to your liking. The Streeter Systems site generates the bill or materials that you would need to order.

Here’s a ‘screen shot’ of something you might do for that old Hertz bus: 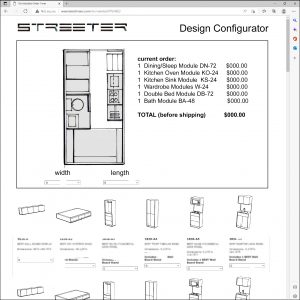 3.) Give ’em your credit card number and wait for the skid of parts to arrive!

The website would obviously have plenty of install kits for plumbing and electrical, plus videos to watch to make installation easy. Remember that these are basic components- you can customize whatever you want but at least you have the bread-and-butter parts worked out for you.

There’s other features as well that could be offered by Streeter Systems, such as the “Caboose Cupola” inspired by Mercedes’s love for trains. This overhead unit blends in with the roof air conditioners (to make them look less stuck on) and has windows on the sides for indirect sunlight like on old cabooses. 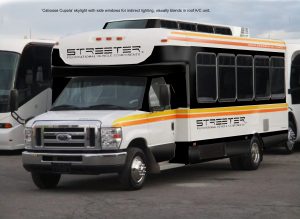 In back, you can bolt on a screened porch. No, really. Fold the top up, the floor folds down, and a screen covers the perimeter for a mosquito-free place to relax. Fold out stairs allow access. 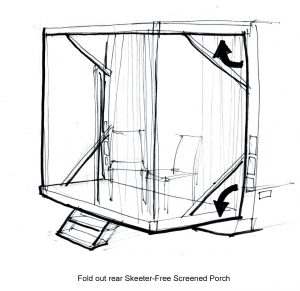 Price? It’s anyone’s guess, but remember that a new airport shuttle-sized motorhome with bathroom and kitchen would easily be six figures, so even using a late model $20-30,000 used bus and a Streeter kit it should still be a fraction of that cost. [Mercedes’ Note: Or buy a bus from a surplus auction for well under $10,000!]

There’s also a plethora of unfinished projects out there; at a car show recently a man with a mint 1973 GMC motorhome told me that you can find countless examples of these masterpieces where the owners ripped out the insides and then gave up. In fact, our own Mercedes says that if an option like this were available, her RTS might be a full-fledged Autopian bus camper right now. 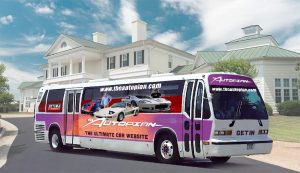 Shit, we should crowdsource this thing to make that happen, right?

Read All My Posts »
PrevPreviousWhat Everything Printed On Your Tire Means And Why It’s There
NextMercury Monday: The Mercury Cougars Of The 1980s Are The Fox Bodies Everyone Forgot AboutNext