Mercury Monday: The Mercury Cougars Of The 1980s Are The Fox Bodies Everyone Forgot About

Welcome back to another installment of Mercury Monday! Your titular host, Jason, is out, so I’m taking over the reins of the series that nobody asked for, highlighting a marque few people talk about. Today, we’re looking at another unusual Mercury. The Mercury Cougar started life as a pony car before evolving into a personal luxury car before finishing out as a tuner of sorts. During the 1980s, the Cougar was also something else: the Fox platform car that you probably forgot about.

As Autoweek explains, in 1961 Mercury was recovering from an attempt to be a separate division, with bodies that weren’t hand-me-downs from Ford. At around the same time, Ford engineers were at work on the project that would become the Ford Mustang. Lincoln- Mercury designers proposed a design for the new car, but ultimately lost to the Ford Production Studio. That didn’t stop Lincoln-Mercury brass from wanting a slice of the pie, and the division wanted to release its own version of what Ford was cooking. Ford wasn’t convinced about a Mercury model until after the Mustang became a smash hit. The new car was given the green light, and was to be a more luxurious pony car slotted between the Mustang and the Thunderbird.

The Cougar was born in 1967, and its name was actually a finalist for what became the Mustang. While nowhere near the Mustang’s galloping sales figures, the Cougar was no slouch, either. Lincoln-Mercury expected to sell 85,000 of them in the first year, but the cat jumped out of the gate, selling 150,893 examples in its first year. The Cougar was also practically an instant success. But we’re not here to talk about the Cougar’s pony car years. Instead, we’re headed to the 1980s.

Next year would bring winds of change for both the Mustang and the Cougar. For 1974, the Mustang became the Mustang II, riding on a platform derived from the Pinto. This was a problem for Mercury, as a Pinto-based Cougar would have reportedly clashed with Mercury’s own Capri. Ford executives reportedly considered killing off the Cougar entirely, but Lincoln-Mercury argued that it needed the Cougar. Lincoln-Mercury’s solution was to send the Cougar upmarket. The third-generation Cougar became a derivative of the larger Torino and its style more personal luxury than pony car. By this time, the Cougar long had a more luxurious trim, XR-7, but now it embraced the luxury packaging even more.

In 1977, the Cougar took another turn, becoming Mercury’s version of the Ford LTD II. That meant Cougar sedans and Cougar wagons. This is about as far as the Cougar got from its original concept. The wagon soldiered on until 1978, with the sedan dying off in 1979. To Lincoln-Mercury’s credit, broadening the Cougar did work for sales, as 213,270 units found a home in 1978. The XR-7 stuck around, being a more luxury version of the Cougar. But in 1980, Mercury would flip the script again.

In 1980, Mercury put the Cougar on an extreme diet. The XR-7 lost 15 inches in length, four inches in width, and about 900 pounds in weight. The new XR-7 was just 16.7-feet-long and oh yeah, it now rode on Ford’s Fox platform. This meant having the Mustang as a platform-mate again, and gaining mates in the form of the compact Ford Fairmont and Mercury Zephyr. It also had an additional mate in the form of the Capri, which looked visually similar to the Mustang.

But while the Capri was the pony car, the Cougar took the position of a personal luxury car, offering up all of the 1980s luxury that you could handle.

I’m talking padded landau roofs, opera windows, plush velour, and leather. This was the era in which American luxury barges had seats that looked like the pillowy chairs at your grandma’s house, and rear ends looked like they had integrated continental tire kits. And this is the Malaise Era we’re talking about, here, so you got V8s that made morsels of power. The 255 cubic-inch V8 made 115 horsepower with the 302 pumping out 130 horses.

Perhaps my favorite feature of these is the rad optional digital instrument cluster. I’m a sucker for the little tricks that automakers used to make cars seem futuristic back then.

In 1983, the Cougar saw another redesign. Now, if you looked at this car and assumed it was front-wheel-drive, I wouldn’t blame you. At least to me, it has those vibes.

But sure enough, under the sheet metal of this coupe was the now-familiar Fox platform. By this time, the Cougar gained a stablemate in the form of the Ford Thunderbird, and other platform mates would eventually include the Lincoln Continental Mark VII, Mercury Marquis, and more. I had completely forgotten that any Cougar rode on the Fox platform until fellow dirt cheap car fan Stephen Walter Gossin pointed these out. Gossin even provided us a picture of his own in the Autopian Slack, which usually looks vaguely like a junkyard.

The sixth-generation Cougar did away with the sedan and wagon, instead existing solely as a personal luxury coupe. Power options were different, too. The 302 made a comeback, still rated at 130 HP. New for this generation was a 140 cubic-inch turbocharged Lima four, an engine shared with the Thunderbird Turbo Coupe. Opting for the turbo four netted you better power, with 145 HP in automatic Cougars and 155 HP with a manual. A 232 Essex V6 was available, too, and made 120 HP before getting fuel injection and upgraded to 140 HP. By 1988, the 302 got up to 155 HP, matching the turbo four’s max output.

This Cougar is also notable for its reported use of computer-aided design and a laser-guided paint system. Nice touches include little bits of detail like wipers that hide under the hood and doors designed to reduce wind noise. Options included power windows, air-conditioning, and cruise control. Other options included leather, woodgrain dashboard panels, a return of the digital instrument cluster and incredibly, one of those talking car chime systems.

This Cougar was better received than the last, and sales peaked at 135,904 in 1986. In fact, for every year but its launch year in 1983, this generation of Cougar has sales above 100,000 units. And it was without help from sedan and wagon variants!

The Cougar went on to get two more generations, both with worse year-over-year sales numbers. Perhaps the weirdest Cougar is the eighth-generation. That car wasn’t even really a Cougar, but the third-generation Ford Probe. 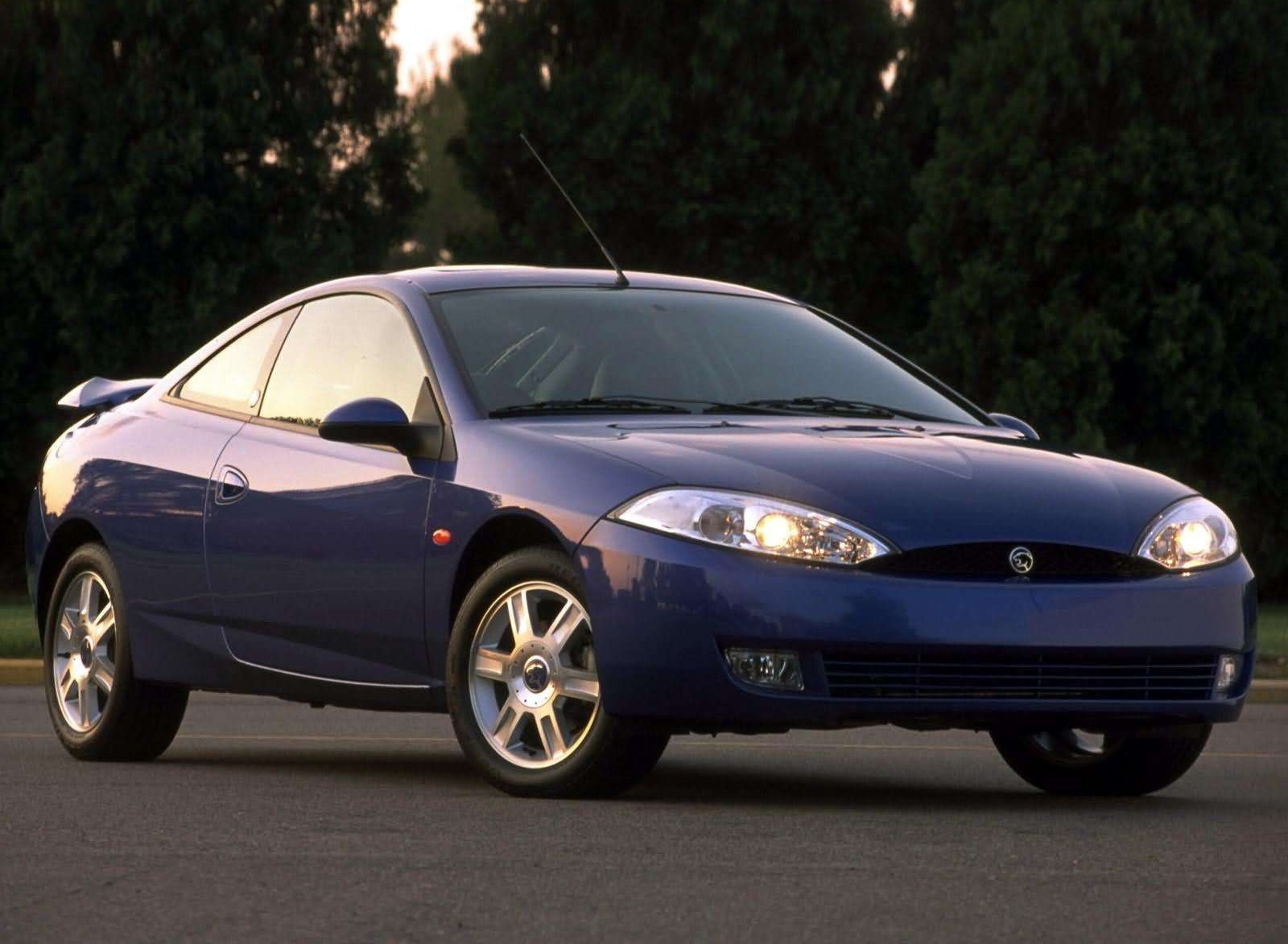 Since Ford killed the Probe, the design was punted over to Lincoln-Mercury, where it became the Cougar. The eighth and final generation Cougar had tuner car looks, vastly different from all Cougars before it. But after a few years of slow sales, even it was killed off.

Looking back, it’s interesting that the Cougar started off as a car between the Mustang and Thunderbird, but through time it nudged closer and closer to the Thunderbird. Still, if you’re a fan of Malaise Era cars and want something just a touch different, consider a Cougar. These cars are the Fox body cars that don’t really look the part.

Mercedes is a lifelong fan of all things powered by an engine. When she isn't driving one of her five Smart Fortwos or her 14 other vehicles she could be found in the cockpit of a Cessna 172 or perhaps swimming in any body of water that she could find. She also has a deep love for buses of all kinds. Please send her buses. mercedes@theautopian.com Instagram: @mistymotors Twitter: @Miss_Mercedes30 Facebook.com/neonspinnazz
Read All My Posts »
PrevPreviousOur Daydreaming Designer Imagines A Modular System For Easy Bus-To-RV Conversions
NextCheck Out This Wild Electric UTV Fire That Happened At SEMANext