I’ve heard it said that no one in history was as qualified to start a new car company as former Chevrolet division chief John DeLorean.  I would disagree.

Here’s the reason. People that work within the structure of a giant corporation are often deficient when it comes to entrepreneurial ventures. With a long history and massive dealer network, people will buy Chevys regardless of how bad they are (the DeLorean-attributed Vega comes to mind). Make a flashy but slow, expensive, and teething-issue-filled new sports car in a shit economy, and you’ll have a different story. So in retrospect it really comes as no surprise that DeLorean’s venture ended only a few years after it started, regardless of the unique financing ideas (“this stuff is good as gold…it’s actually BETTER than gold…it weighs less!!” “Hi John…I’m from the FBI…can you please stand up”). 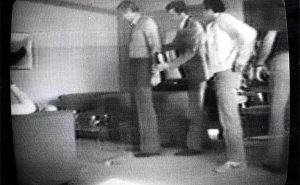 In contrast, Malcolm Bricklin had a drive for business, showmanship, and the ability to TOTALLY stretch the truth, but this painfully ambitious Jewish kid from Philly had NONE of Delorean’s automotive credentials. Absolutely nothing. He even claimed that before his first venture (Subaru) he’d never sold a car in his life (he traded in his own rides). 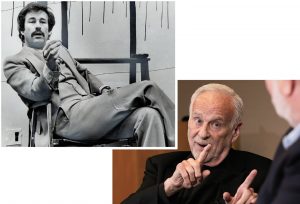 Despite this, Bricklin was able to start up at least (at time of writing) half a dozen different car businesses with varying levels of success. Certainly more than Johnny Z (and didn’t Malcolm make a gullwing doored, no-paint car nearly a decade before Delorean? Just sayin’…). Bricklin could see markets as an outsider and could make the niche products that appealed to certain people.

Two areas in particular that he delved into were inexpensive cars (Subaru 360, Yugo GV, the Chinese company Cherry): 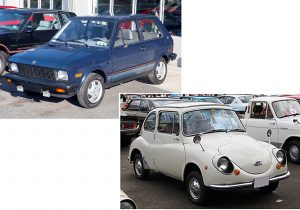 …and, of all things, safety vehicles (the Bricklin SV1, and a new electric three wheeler that supposedly Don Panoz is engineering right now to allow a person to survive a 100MPH crash like a race car). 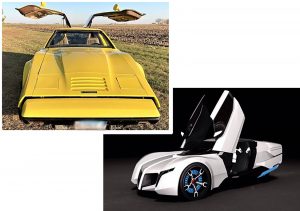 sources: inside EVs and The Journal Classic Cars

Sure, this latest one above is probably a pipe dream, but let’s cut him a break; Malcolm is fucking 82 years old What did you and I accomplish today? I read that this guy apparently has breakfast and no other meals each day because he doesn’t want to stop to eat.

With a few different decisions or turns of luck, where could Bricklin have gone?

Here is the alternate reality. It’s around 1987, and no matter what you hear about the Yugo being the worst car in the history of mankind and a crime against humanity, it was NOT as bad as it sounded and it was, at least initially, a tremendous sales success that made Malcolm a shit ton of money. Still, that old Fiat 128 was not a long term solution for the market, and it would have been fun to see what Bricklin could have done had he tried to take it a step further.

What if Malcolm had reinvested his earnings into creating an all-new price-sensitive car to be built in Yugoslavia or other low-labor-cost-semi-communist country that also offered the advantage of being a ‘safe’ car. Lee Iacocca famously claimed that ‘safety doesn’t sell’ but it DOES if it adds convenience, comfort, and attractive distinction. I mean, nobody back in the late 80s was buying Volvos because they thought they were beautiful…and why do ‘safe’ cars have to be reserved for those that can afford a fancy, expensive European product? 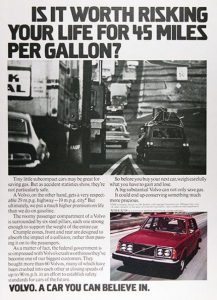 And can a little car be safe, too? Malcolm would certainly sell it that way, and could that fucker ever sell! 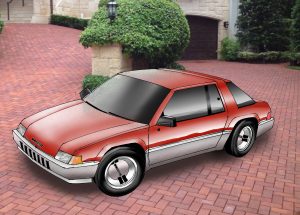 This is it…the 1988 Bricklin SLV. I am sure Malcolm will want to name the car after himself, though honestly I think there would still be a stank on the name from the failed SV1 so I would highly recommend a different, made-up brand (something stupid and vague like the Embarc SLV)

Bricklin was never one to create his own mechanical components for any car, so he would want to find a suitable starting point. As luck would have it, 1987 was when FIAT was discontinuing the Ritmo/Strada, so like the FIAT 128 and 124 being continued in Eastern Bloc nations, he could do the same here. Again, poke fun all you want, but the Ritmo could be made into a pretty lively chassis compared to dull contemporary Japanese cars or, worse yet, a GM J car or ten-year-old-design Omni/Horizon (which were hardly paragons of quality, reliability, and refinement themselves). If you read about it, Malcolm’s team took FOREVER to figure out how to get Yugoslavian labor to finally make a car worthy of non-communist nations where they wouldn’t just buy whatever you build, and it’s a shame that he didn’t get the chance to expand on his learning. 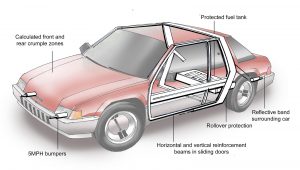 What kind of safety features would this thing have? To start with, the original Bricklin’s idea of ‘safety colors’ created some fun, distinctive looking finishes.  Certainly this could help stand out against usually-grey-or-silver concurrently GLCs and Sentras. The Bricklin SV-1 famously had ram-bar bumpers styled in front and back, but this car would actually have lower quarters in a nearly indestructible polycarbonate plastic all the way around to protect from bumps and hits (and be easily replaceable if damaged). Also, barely noticeable is a wraparound reflective white/grey stripe in the bumpers/side panels that you will never notice during the day but at night will glow in the headlights of other cars far brighter than any marker lights…and make this car ultra-distinctive after dark!

Ah, but what about Malcolm’s favorite ‘safety feature’- the gullwing door?! Yes, it was marketed as being much safer than standard doors since you don’t have to open onto traffic (and can park withing inches of another car or wall and still get out). Obviously, nobody is doing gullwings on a small, inexpensive car…but what about sliding doors? Really! You can see Pininfarina did it on the safety-oriented Sigma show car back in like 1963 and it looked rather slick: 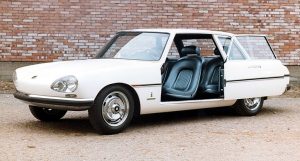 There’s very little intrusion on other cars or passing bikers, and access in and out would be great. But what about side impact safety once you remove the center B pillar? The answer is that the doors would have built in beams going horizontally, and also one going vertically that would lock into place when the doors were shut, giving the same safety as a standard four door sedan (if not more). The latch is under the mirror, and the sliding track would be built into the inside door panel so as not to disturb the exterior with a big ugly slot. The door is styled in such a way that it looks much like a traditional set of doors and not like a minivan door has been plopped onto a car.

So is it considered a four door or two door car? Uh….neither! And both! I’ve added front and rear opening windows on the single door (roll down front, pop-out vent for rear seat passengers). 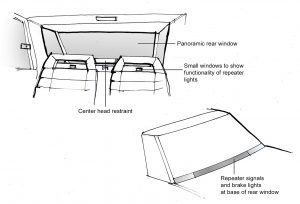 There is a built in roll over bar behind the sliding doors, but it is NOT all the way at the back of the passenger compartment. Because this structural beam is located slightly forward of the backlight, it would allow for very small pillars between the backlight and the rear quarter windows, providing absurdly good rear quarter visibility for lane changes and parking.

By 1987 CHMSLs were required on US cars…but Malcolm would take it to the next level by adding repeater turn signals above the rear parcel deck…I mean, that’s where your eyes are, right?  Plus, there are intentional little pinholes in the back of these parcel deck lights so that the driver can be sure they are working…a nice little essentially free diagnostic tool.

Inside, safety means driver focus. I really like some of the show cars from the seventies like the Citroen Karin and Lancia Sibilo where the steering wheel is surrounded by a big round enclosure with ALL of the controls conveniently arranged around it, other than the radio which is mounted where your FILA-clad partner could change to Kenny G from the Whitesnake song you were blasting. 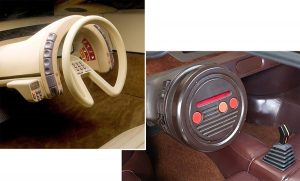 So here is my interpretation. Note that warning lights are displayed prominently across the top of this round housing so they are total line of sight. I see this thing adjusting up and down like the gauge pod on a Porsche 928. 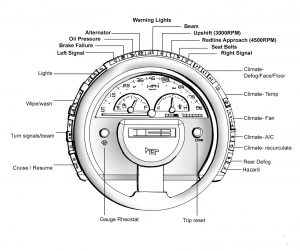 There’s a huge speedometer but no tach. I’ve added an ‘upshift’ light and a ‘redline approaching’ light in your line of sight to do the same thing as a rev counter for all practical purposes (maybe there would be a tach in an expanded or digital gauge version if there were a ‘sport’ model. Don’t forget, there was a FIAT Ritmo Abarth, so that had to have some snort to it). 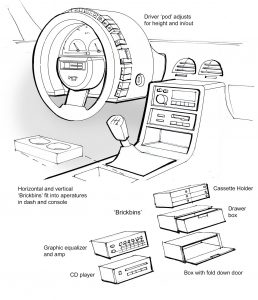 The center console features a bunch of apertures, and if you don’t like what is placed in each opening it’s your own fault, since YOU get choose what goes where…add a DIN radio, add a CD player, install a very 1980s equalizer, little storage containers (‘Malcolm’s Brickbins’). Anything EXCEPT an ashtray, since Malcolm will stick to his whole smoking-is-dangerous-while-driving thing that he did with the SV-1 (or, my guess is he forgot to add the ashtray just like he forgot the spare tire so he came up with an excuse).

This would NOT be $3990 car, but being made with inexpensive labor will certainly keep costs down, and the safety/convenience features would be a ‘value add’ to make the car stand out against the lackluster US offerings and good-but-boring-as-hell Japanese competition.

And if this succeeded? You just KNOW that Bricklin would have expanded the line with a reborn gullwing sports car, even Elon had to have different-to-be-different doors. Must be a car megalomaniac thing.