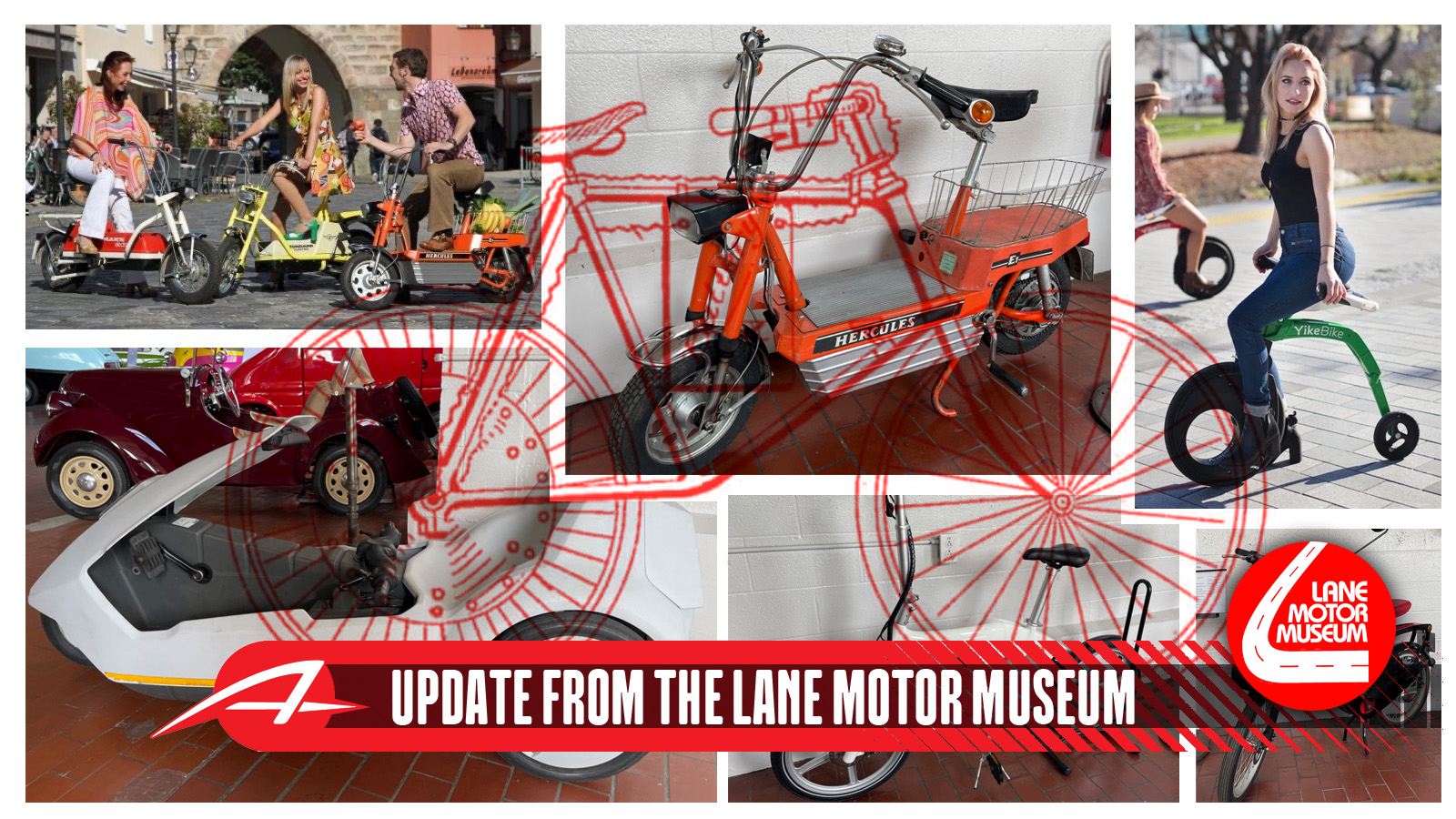 I’m always intrigued when I learn that something we consider modern actually has much older roots. There are tons of examples in automotive history, as Torch has pointed out many times. At Lane Motor Museum, where I work, we’ve just opened a new mini-exhibit on e-bikes and electric scooters.  Let’s take a walk through our electrified, single-rider past, shall we? 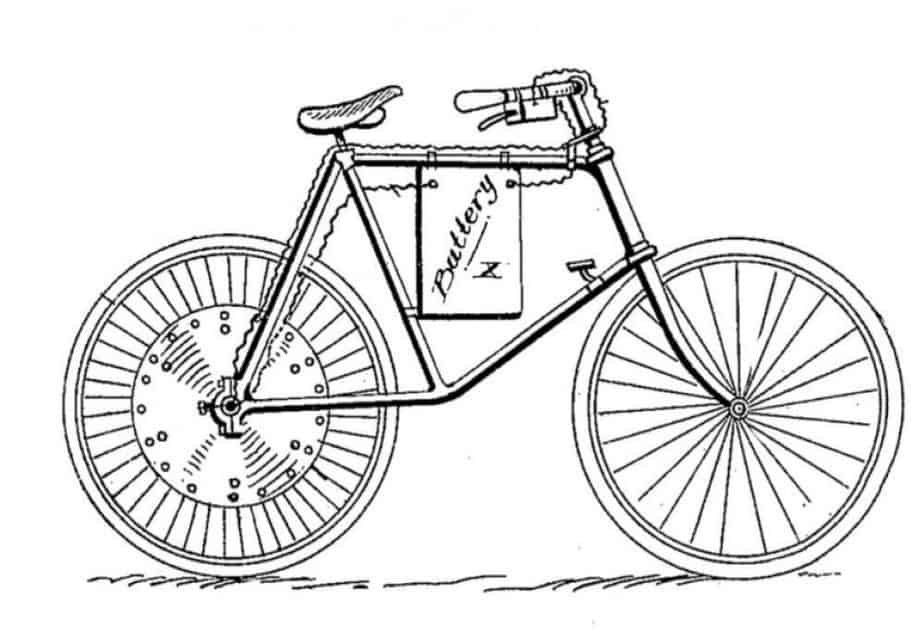 The idea of adding an electric motor to a bicycle first appeared in a US patent in 1895 by Ogden Bolton Jr (Bolton? Oh, come on!) of Canton, Ohio, who was either forward-thinking or just a lazy peddler. The museum doesn’t have one of these Bolton hub motors (the company name was RIGHT THERE), so if any of you Autopians are into late 19th century safety bicycles and happen to run across one of these bad boys, let us know! 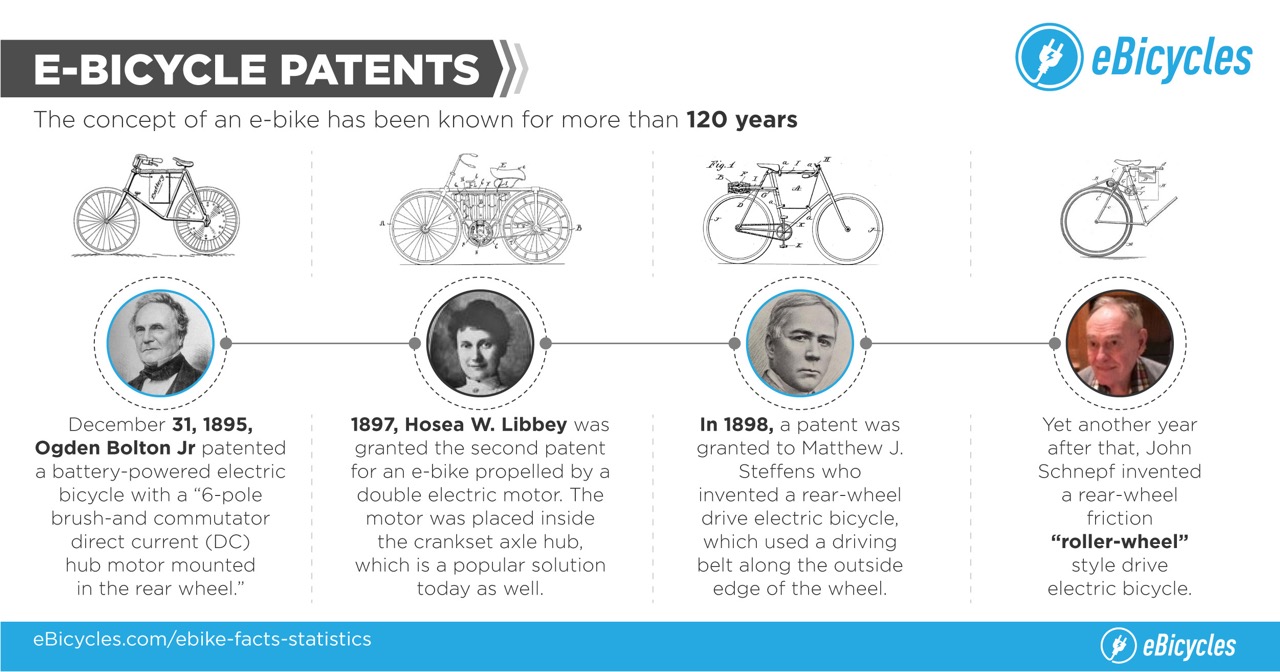 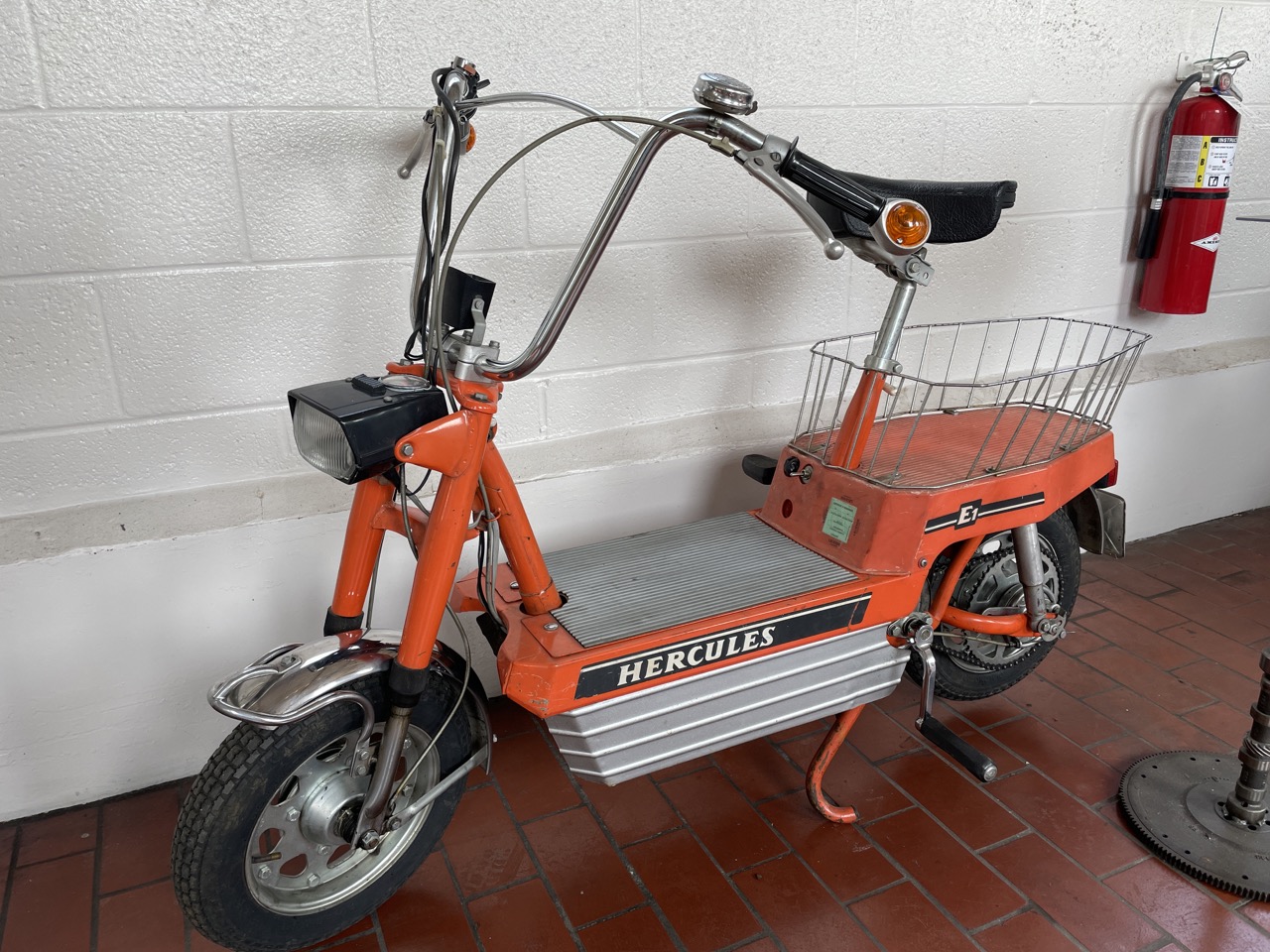 We’ll skip ahead a few years to the earliest electric scooter in our collection, this 1974 Hercules E1. Hercules was founded in 1886 by Carl Marschütz as a bicycle manufacturer in Nuremberg, Germany. The first Hercules motorcycle debuted in 1904. Marschütz, being Jewish, fled to America during World War II, and by the end of the war 75% of Hercules’s factories had been destroyed. German automotive parts company ZF Sachs purchased the company in 1963. 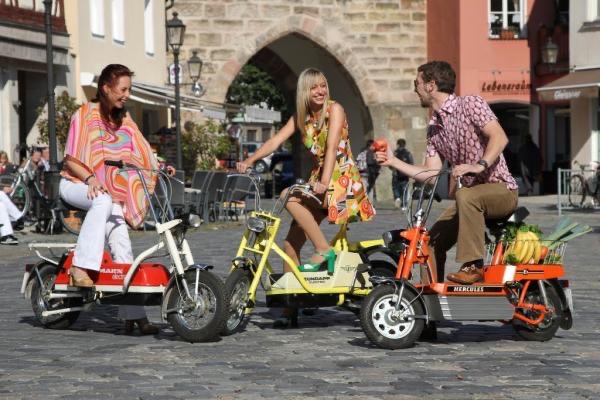 In response to the 1973 oil crisis, Hercules developed this all-electric scooter, the E1. The 750 watt Bosch electric motor uses two 12 volt lead-acid car batteries. The E1 was primarily used for short trips in urban environments. Curiously, the pedals are in the WORST position to use it effectively, so I am guessing Hercules put them on there for the E1 to be counted as a moped. 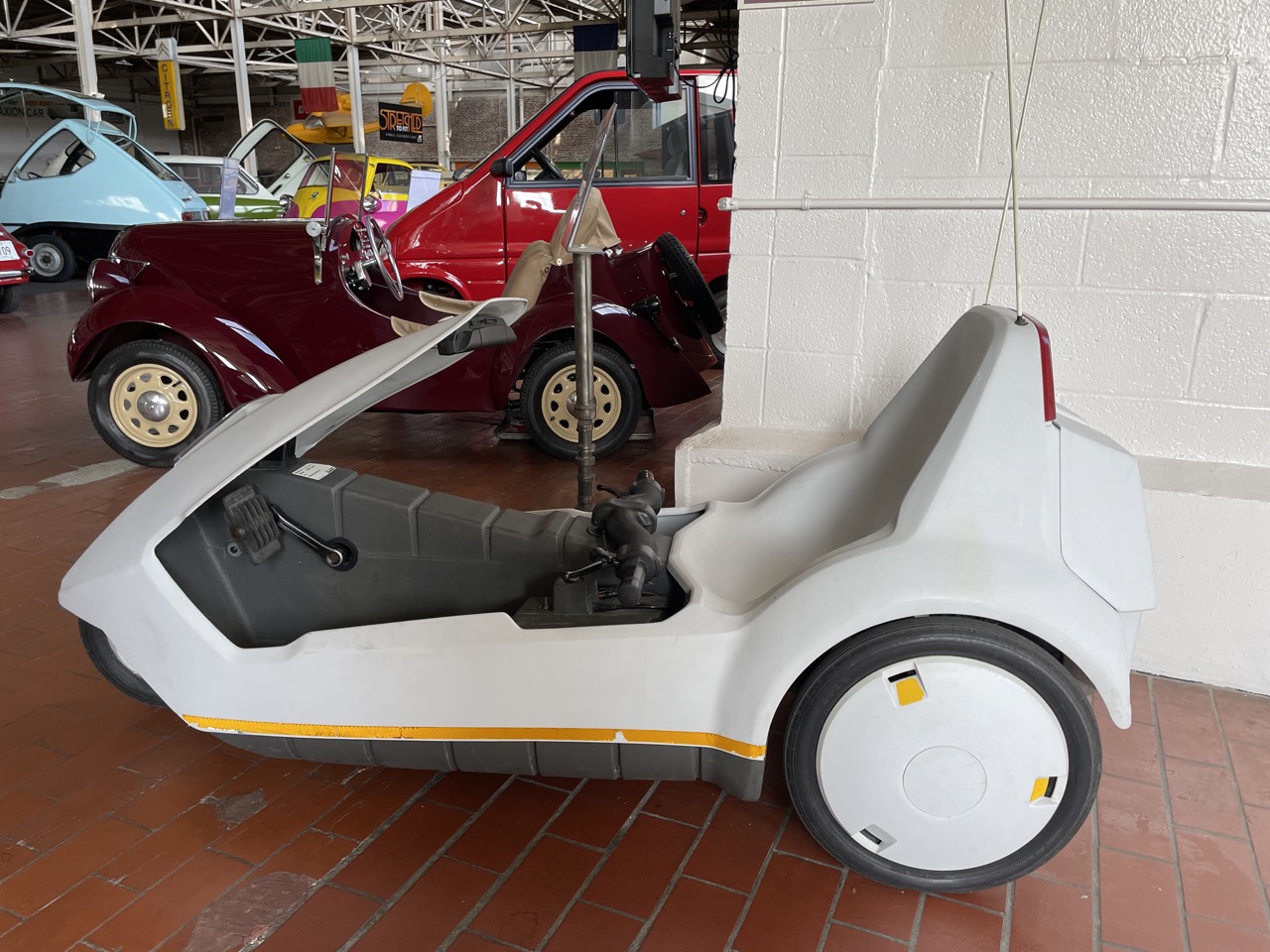 Our next stop is 1985, when the infamous Sinclair C5 debuted. The Bishop just reimagined what this electric tricycle could have been, but Sir Clive’s idea would nonetheless be an important stepping stone in developing what we know today as last-mile commuters: lightweight, electric mobility options for urban professionals. Also, this British TV advert for the C5 is extremely 1980s: 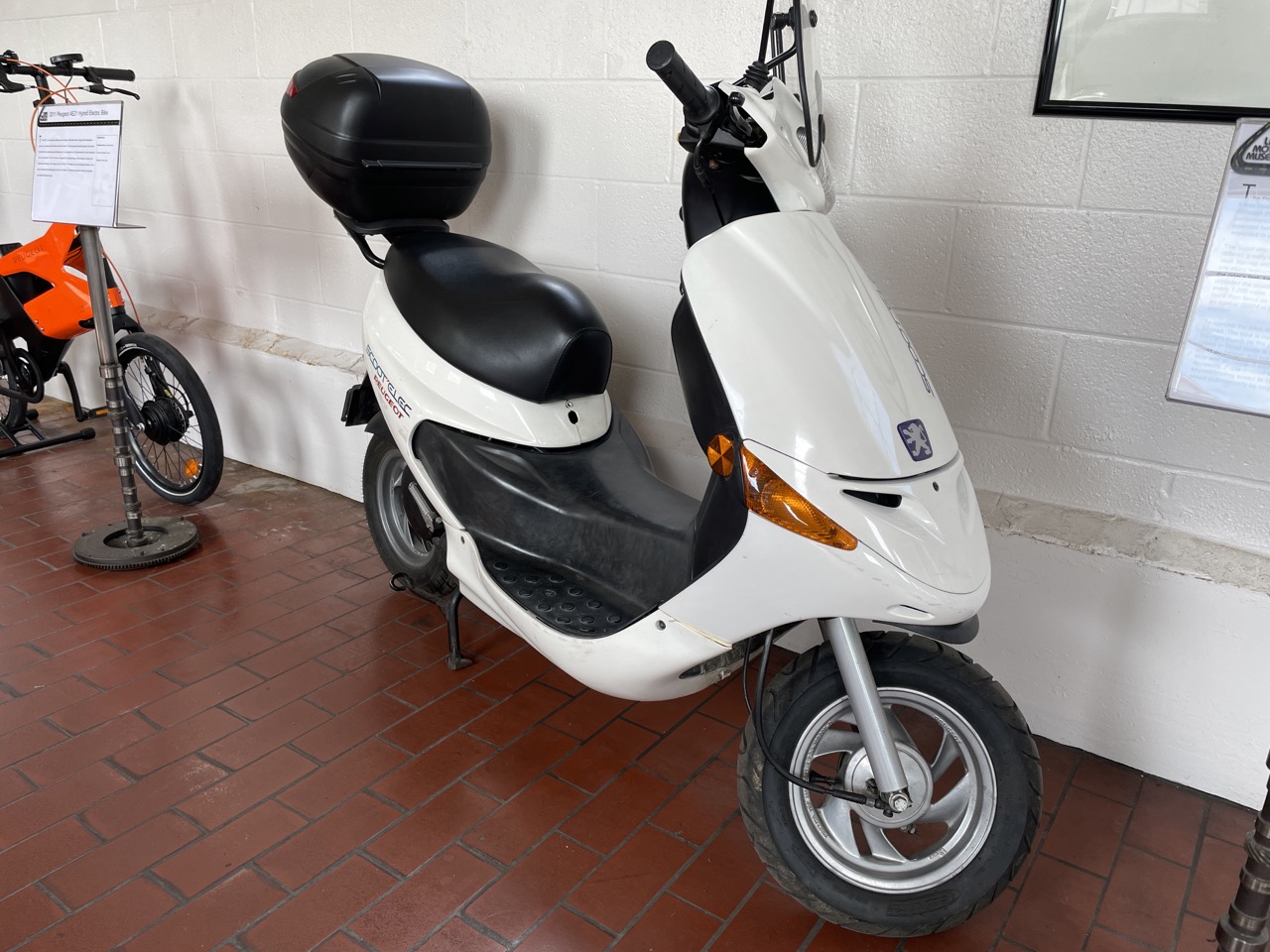 This 1998 Peugeot Scoot’elec is considered to be the first successful mass-market electric scooter.

It was based on Peugeot’s entry-level gas scooter, the Zenith. Although the Scoot’elec’s 25-mile (40km) range wasn’t great, the performance and expected operating costs were. As fast as its conventionally-powered twin, estimated energy costs for an average year – 4000km of use – was expected to cost around 16 Euro, or $23.

The Scoot’elec shared both body panels and suspension components with the Zenith, but differed greatly in the frame. The on-board charger, controller, and cord are stored beneath the seat, leaving only an irregularly-shaped cubby up front for storage. The electric model used a low-slung twin-cradle design, allowing the three heavy batteries to be placed below and behind the rider’s feet, keeping the center of gravity low. These three 6V Saft-brand monobloc NiCad batteries provided the Scoot’elec with both its power and also its Achilles heel. Requiring dealer-only service every 2000km, it was said that the cost of maintenance on the batteries could easily cost more than twice as much as the cost to charge it for a year.

To operate it, one inserts and turns on the key, and then a 4 digit code is entered on the keypad. The bike is now ready for “Roll Handling” mode, limited to 4 mph (6 kmh); a press of the right thumb on the yellow button, and “Road” mode, or normal operation is enabled. Top speed in Road mode was legally limited to 28 mph (45 kmh), although it is well accepted that the Scoot’elec could do 34 mph (55 kmh), but not for long. An Eco mode was also available, by either choice or necessity. If one desired longer range but slower speed, a code could be entered into the keypad limiting speed to 19 mph (30 kmh); if one ignored the “charge now!” warning lights, Eco mode would automatically be engaged, whether you chose it or not.

I think this thing is rather heavy, but I’ll bet that’s more 1990s componentry than anything else. Peugeot made the Scoot’elec until 2006.

This 2007 Vectrix VX-1 is similar to the Scoot’elec in size, but was considered to be the performance option for electric scooters in the mid-2000s. The VX-1 is supposedly capable of a top speed of 60 mph, which is impressive for a scooter. If you keep your hand out of the throttle and ride it normally, it had a claimed range of 65 miles. Again, pretty good for the day. 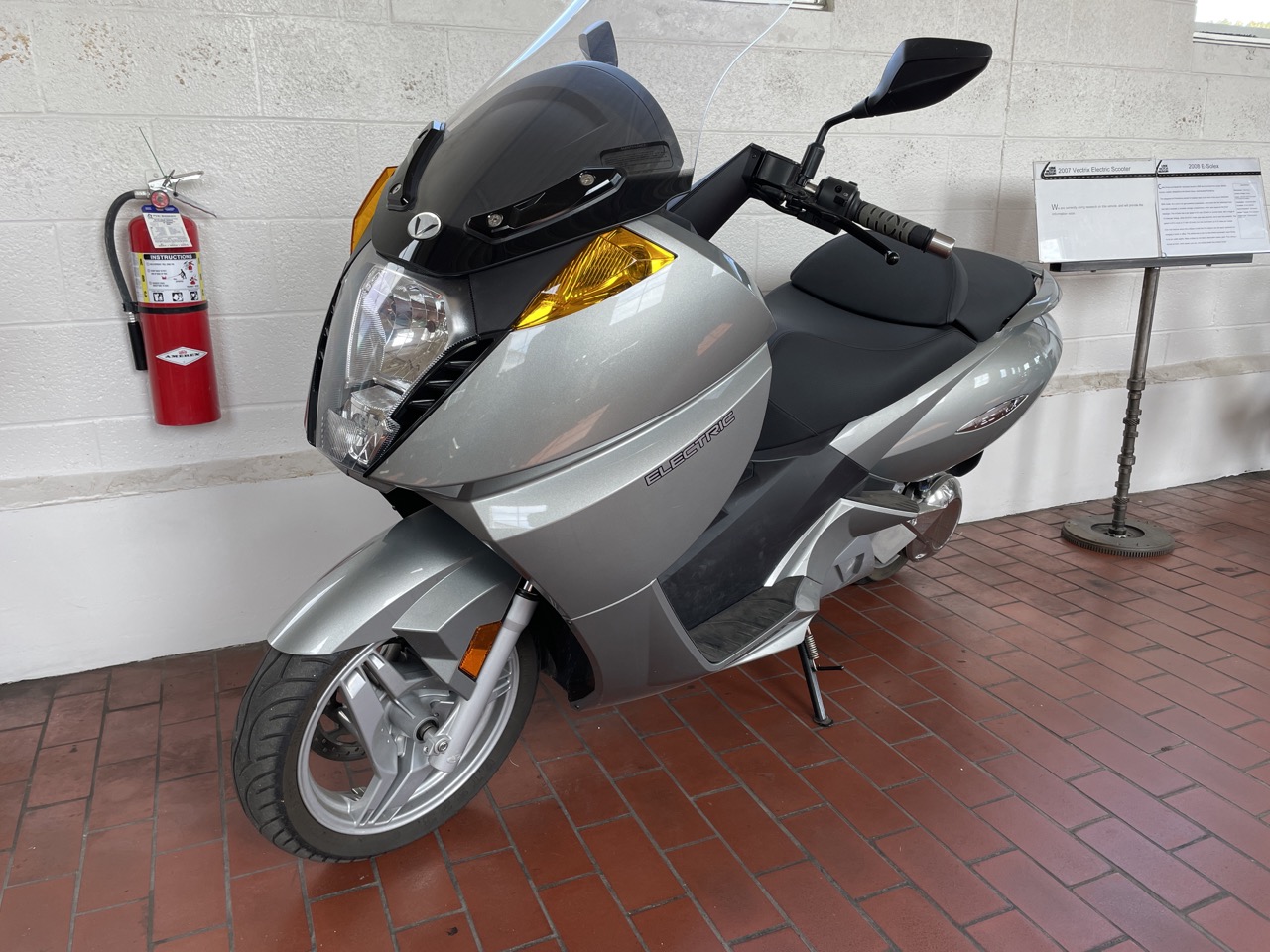 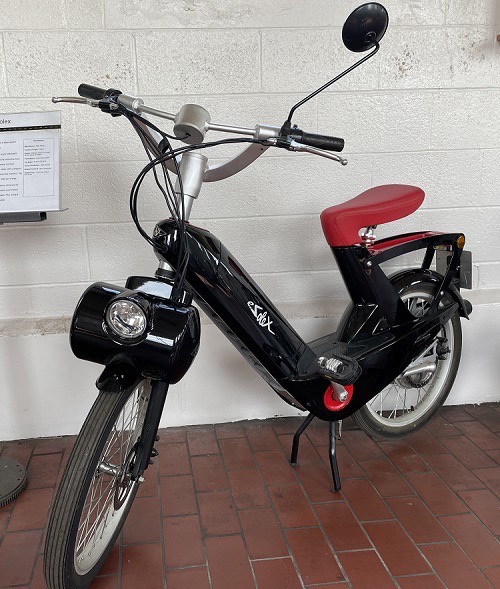 This e-Solex from 2008 is a modern, electric version of the iconic VéloSoleX 3800 moped that was designed by Pininfarina. 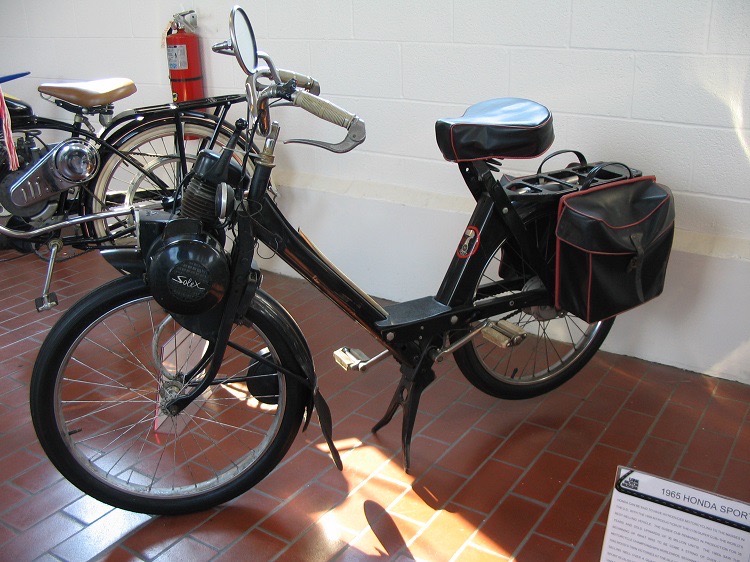 As a nod to its gas-powered predecessor (above), what looks like the distinctive front fuel tank is actually a lockable storage compartment, which also supports the front headlight. The e-Solex has a top speed of 20 mph (32 kph) in normal mode, with a range of 15 miles per charge, while the ECO mode uses less electricity, but is also less powerful. Top speed in ECO mode is 17 mph (22 kph), but range is 37 miles per charge. 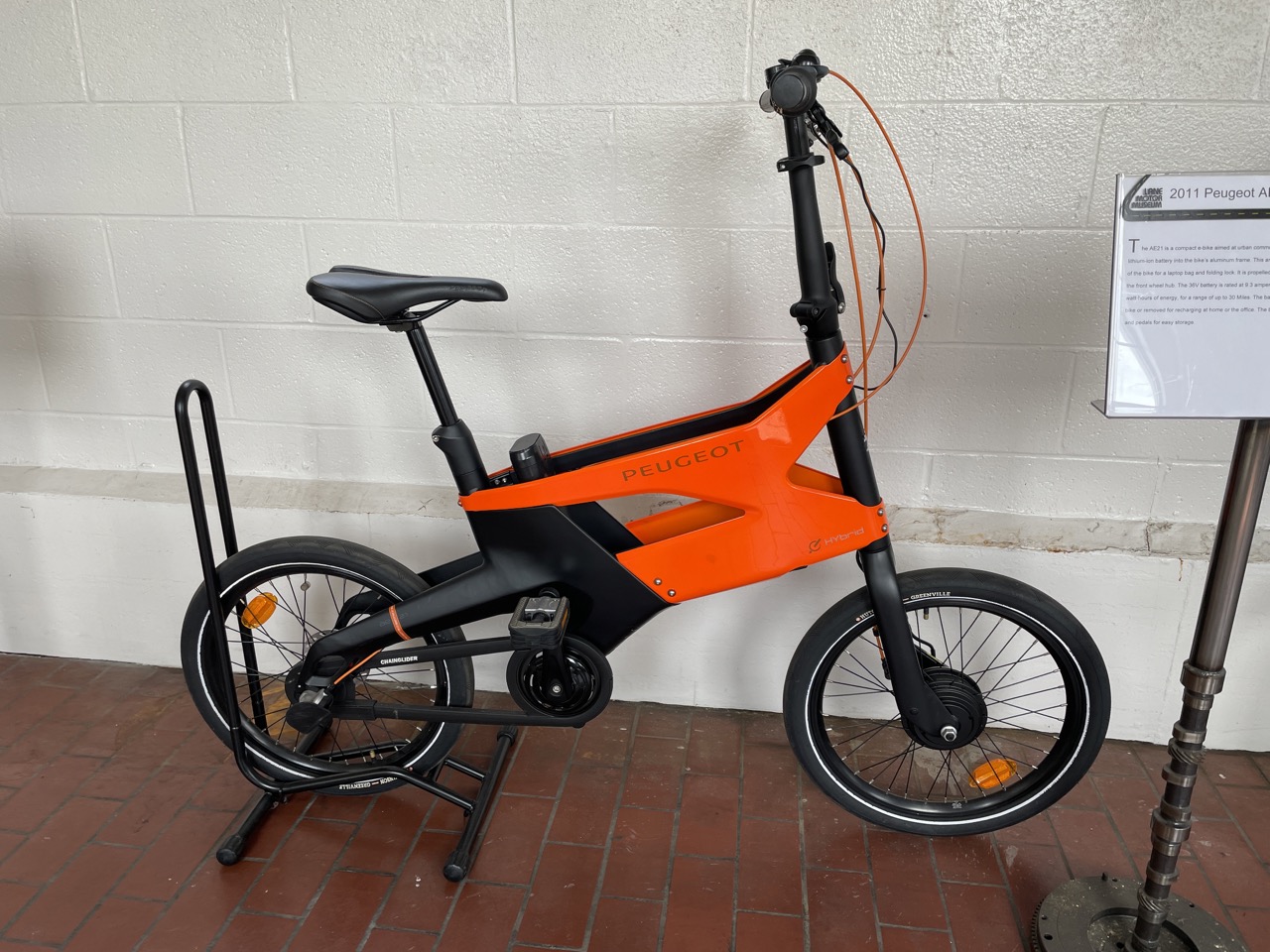 Peugeot began manufacturing bicycles in 1882, eight years before their first internal combustion car was introduced. They are still a major manufacturer to this day, under the Cycles Peugeot name (they’re just not available for sale in the US). This 2011 AE21 Hybrid E-bike’s design integrates a lithium-ion battery into its aluminum frame. This allows space at the center of the bike for a laptop bag and a folding lock. It is propelled by a 250-watt electric motor located in the front wheel hub. The 36V battery stores 334 watt-hours of energy, for a range of up to 30 miles. A cool feature of the AE21 is that the battery can be recharged directly on the bike or removed for recharging at home or the office. It also features folding handlebars and pedals for easy storage. 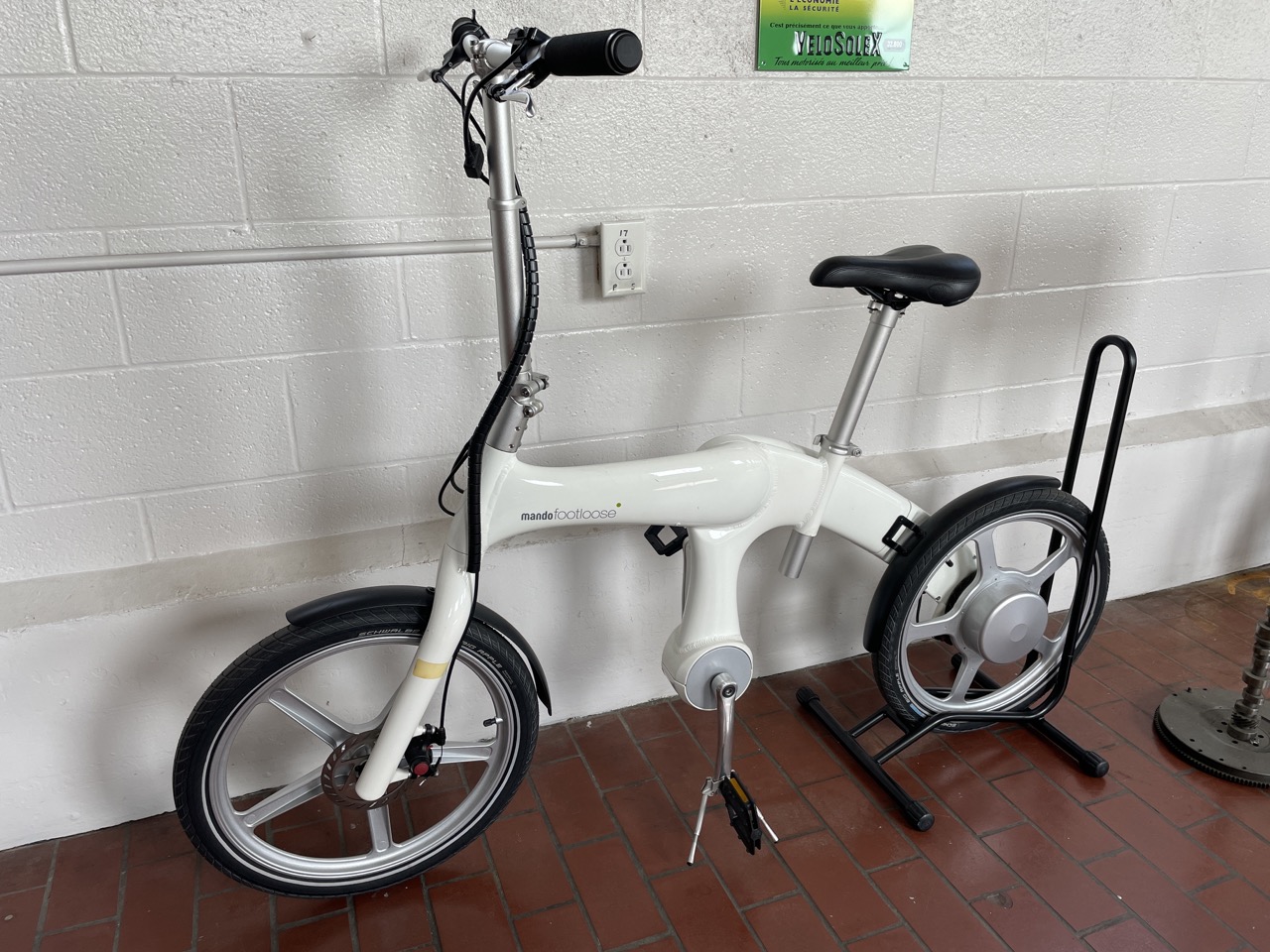 This 2012 hybrid-electric Mando Footloose, which sounds like some sort of Star Wars-themed dance you’d see on TikTok, is considered to be the world’s first chainless bicycle. Instead of a chain, mechanical energy from pedaling is converted to electrical energy via an alternator and is then fed directly to the battery. So, in this hybrid scenario, you are the engine generating electric power. The battery has an 18-mile range, which can be extended considerably by pedaling. It has a top speed of 15mph, and can also fold for easy storage and transportation. 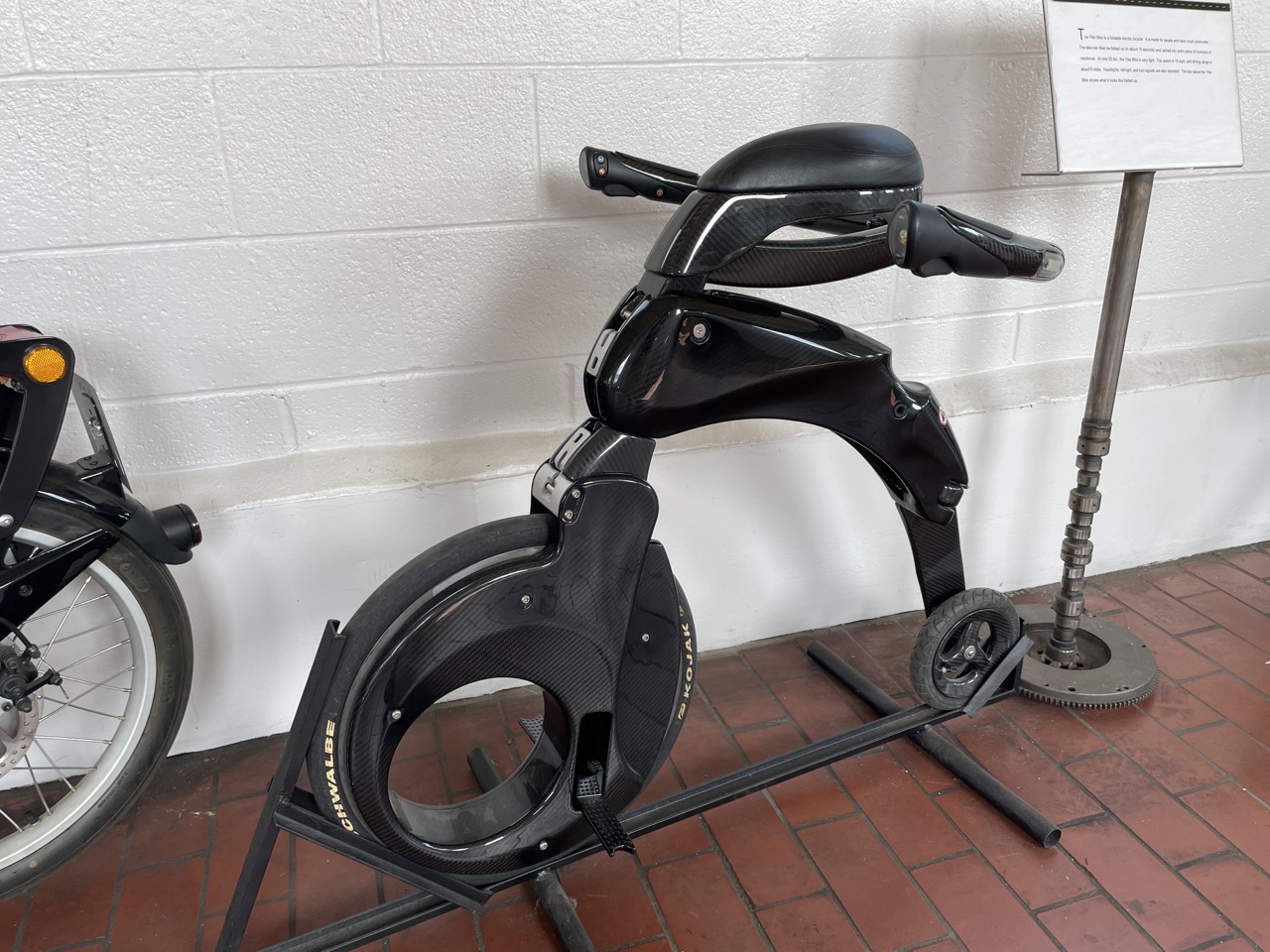 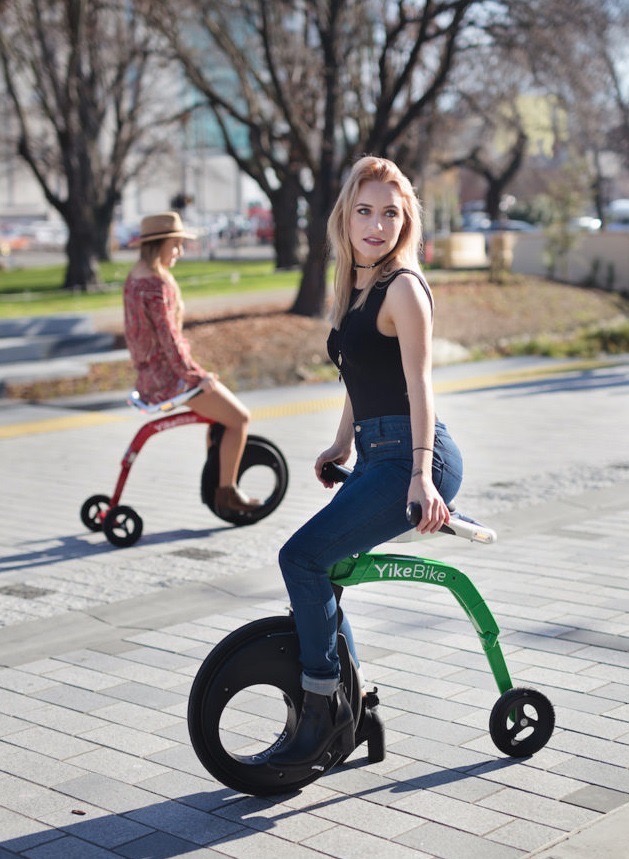 And finally, this folding, fully electric, scaled-down penny farthing is a 2011 Yike Bike. It is definitely something that takes a bit of practice to ride. The throttle and brake controls are wrapped around your rear end, so you feel like you’re riding the Yike Bike backwards. I joke when I demonstrate this thing that the Yike Bike is aptly named, because that’s the sound you make when you first goose the throttle and it takes off. 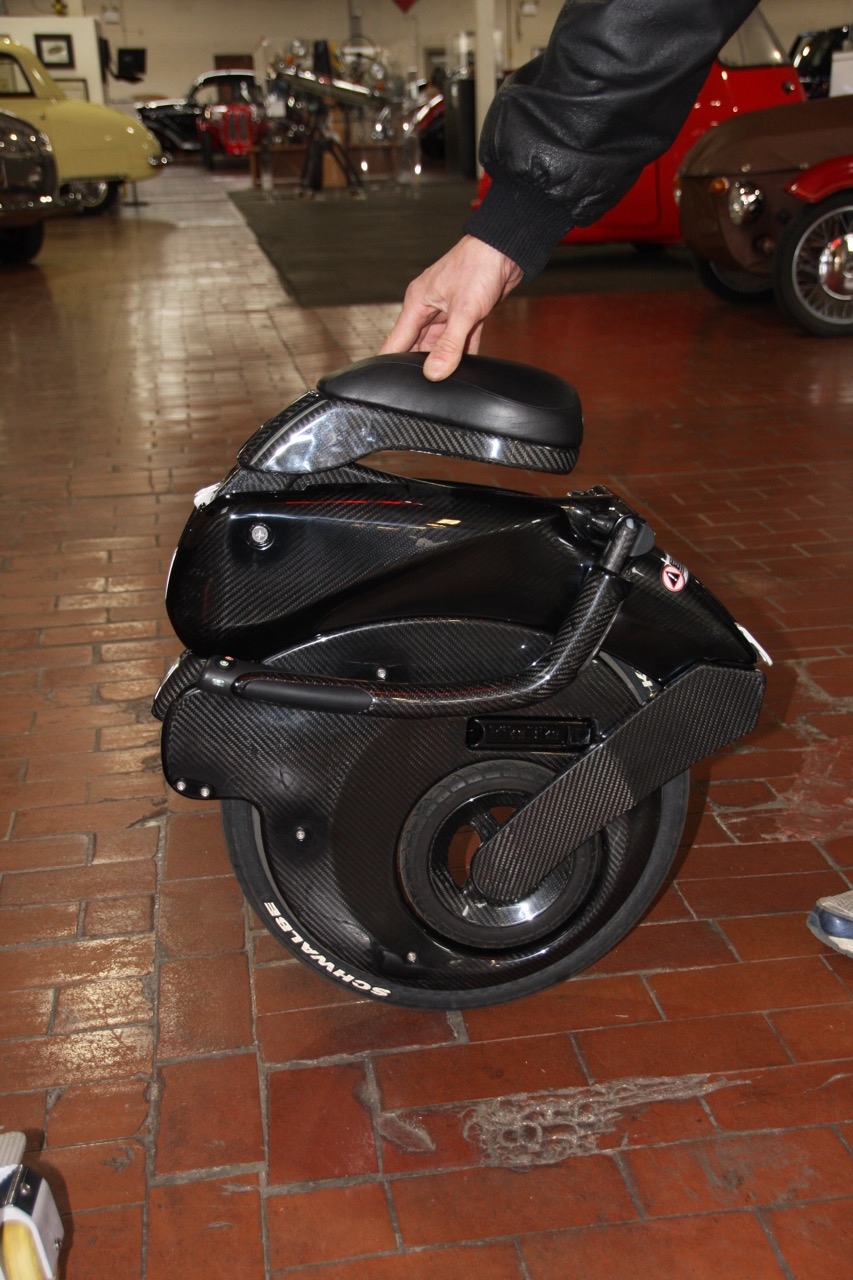 The Yike Bike is very light, about 25 pounds when it’s all folded up. Its top speed is 15 mph, and the range is only about eight miles. All of that sounds fine and dandy, until you check their website, and find out this little bastard’s MSRP is $4,995!! What?! Thanks but no thanks, I’ll walk those eight miles, sans helmet, at roughly 5 mph, and save the cash. Sheesh!

Read All My Posts »
PrevPreviousThe Clever And Easy Way To Turn Your Van Into A Camper For Less Than $10,000
NextOur Daydreaming Designer Imagines Bricklin’s Vision Of A Yugoslavian Built Safety CarNext