An Automotive Supplier Wants To Put Airbags On Your Motorcycle, Your Neck, And Your Grandma

As I walked the North American International Auto Show floor, one little booth shuffled away in the back of the show caught my attention. Autoliv, a major supplier of automotive safety equipment, has hauled out concepts for how it wants to save more lives. It wants to do so with airbags for motorcyclists, airbags for Bird scooter riders, and an airbag to wrap around your grandma.

Autoliv is a major supplier of car safety items, yet its presence in Detroit was more like that of a university or startup company. In fact, before I put the airbags and the Autoliv name together, I thought that this was a startup.

But it’s far from that. Autoliv opened in 1953 by Lennart Lindblad. Back then, it was called Lindblads Autoservice AB. And right from the start the company was about making safety equipment. In 1956, Lindblads made its first seatbelt.

In 1975, the now renamed Autoliv got acquired by a company that made a seatbelt retractor. Skipping forward, in 1989, Volvo introduced the company’s seatbelt pretensioners in its cars. Autoliv’s history goes on from there and includes notable developments like a knee airbag in 1995, side curtain airbags in 1998, in 2005, a hood that pops up during pedestrian collisions, active seatbelts in 2006, and even a hood airbag for pedestrians in 2012. 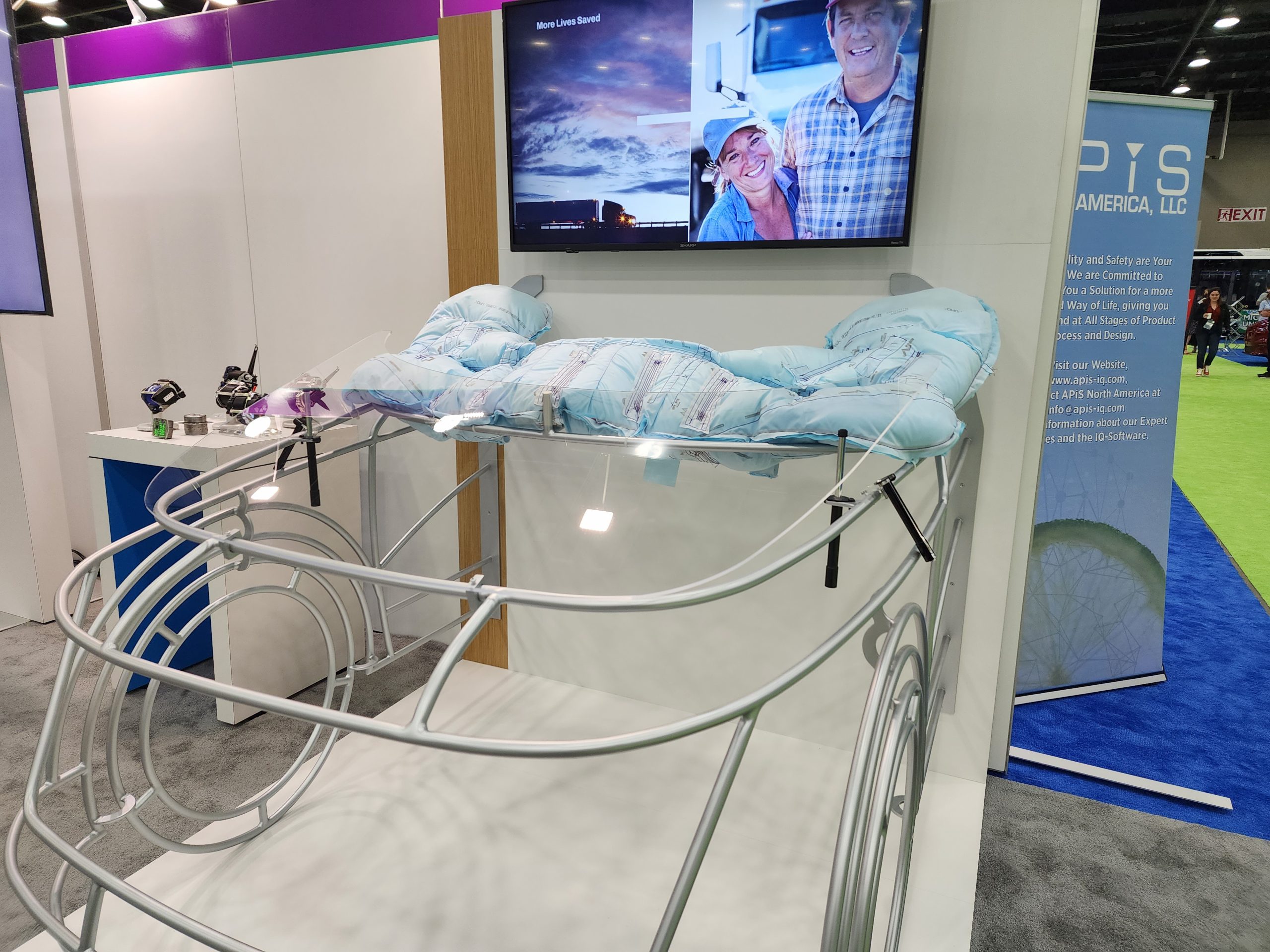 Today, the company claims a huge 43 percent market share with its safety products in cars all over the world. Autoliv says that its products saved close to 35,000 lives in 2021 and prevented more than 300,000 serious injuries. And of course, it wants to save even more.

The new product that first caught my interest is Autoliv’s motorcycle airbag. 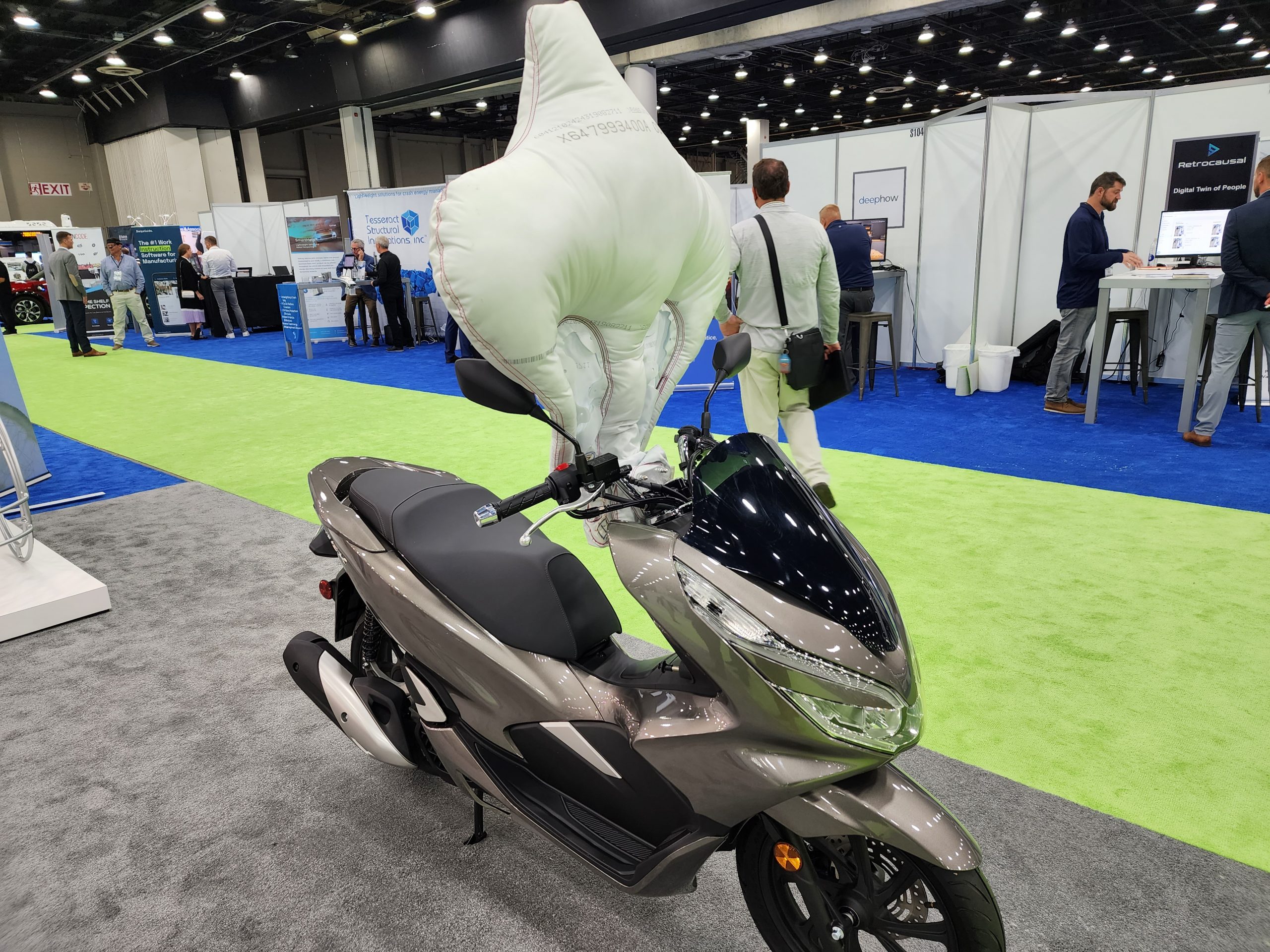 Last year, Autoliv teamed up with Piaggio Group. The two believe that motorcyclist deaths and injuries from crashes with cars can be reduced if the motorcycle can deploy an airbag like in a car. Their idea to achieve that is to limit at least some of a motorcyclist’s momentum during a frontal crash. 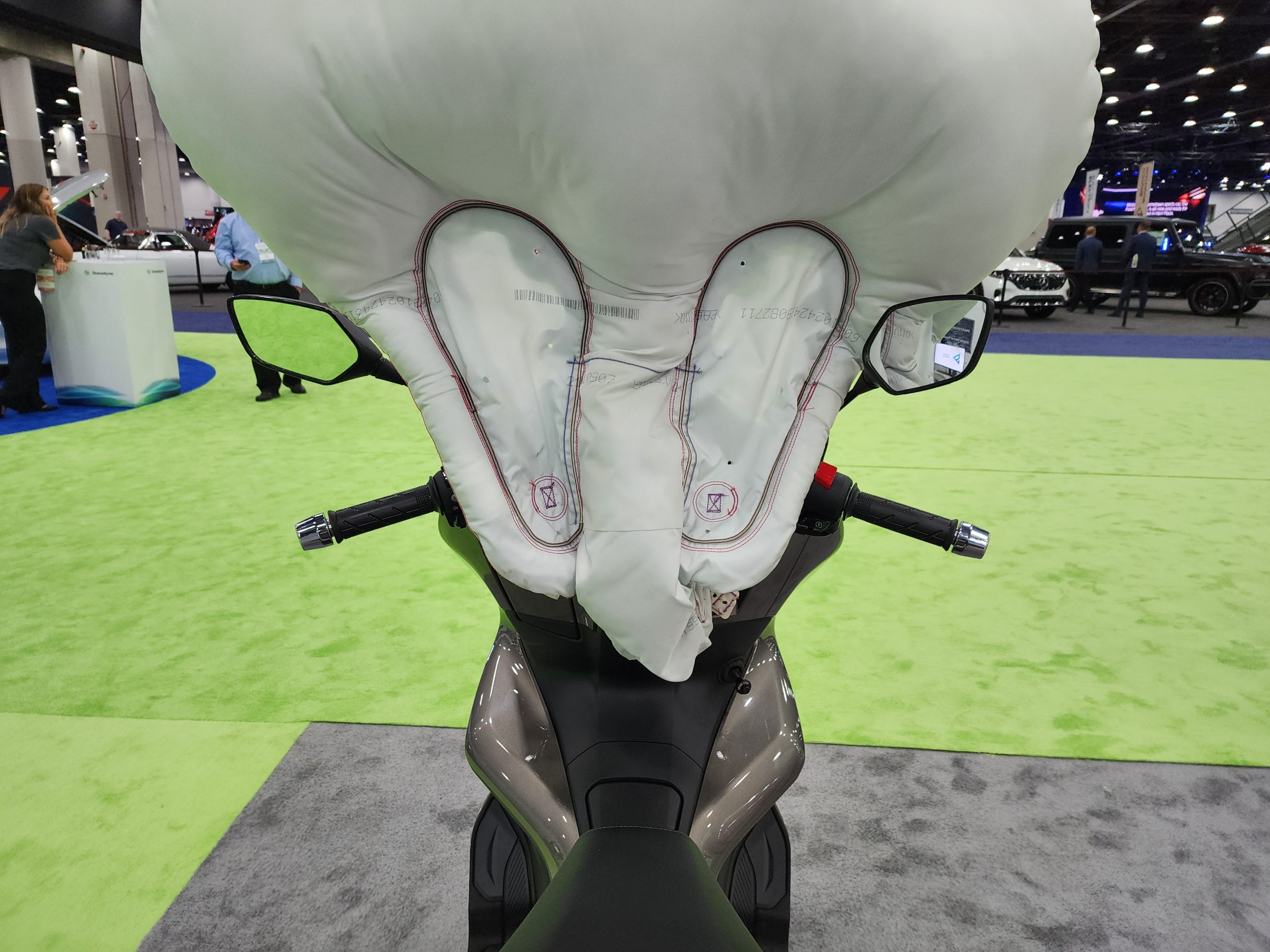 Autoliv’s system works like Honda’s where a sensor detects a frontal crash, a computer determines whether to deploy the bag, a pyrotechnic inflator fires off, and the bag inflates. There’s a video of it being crash-tested, which can be viewed here.

The company is still testing its system, but expects to put them on the road soon. Unfortunately, its reps tell me not to expect them in America anytime soon. Autoliv is targeting the massive motorcycle market of Asia first. It believes that launching in Asia first is important since so many riders out there are riding not for fun like Americans, but out of necessity. And, as we’ve all seen in videos, riding out there can be chaotic. 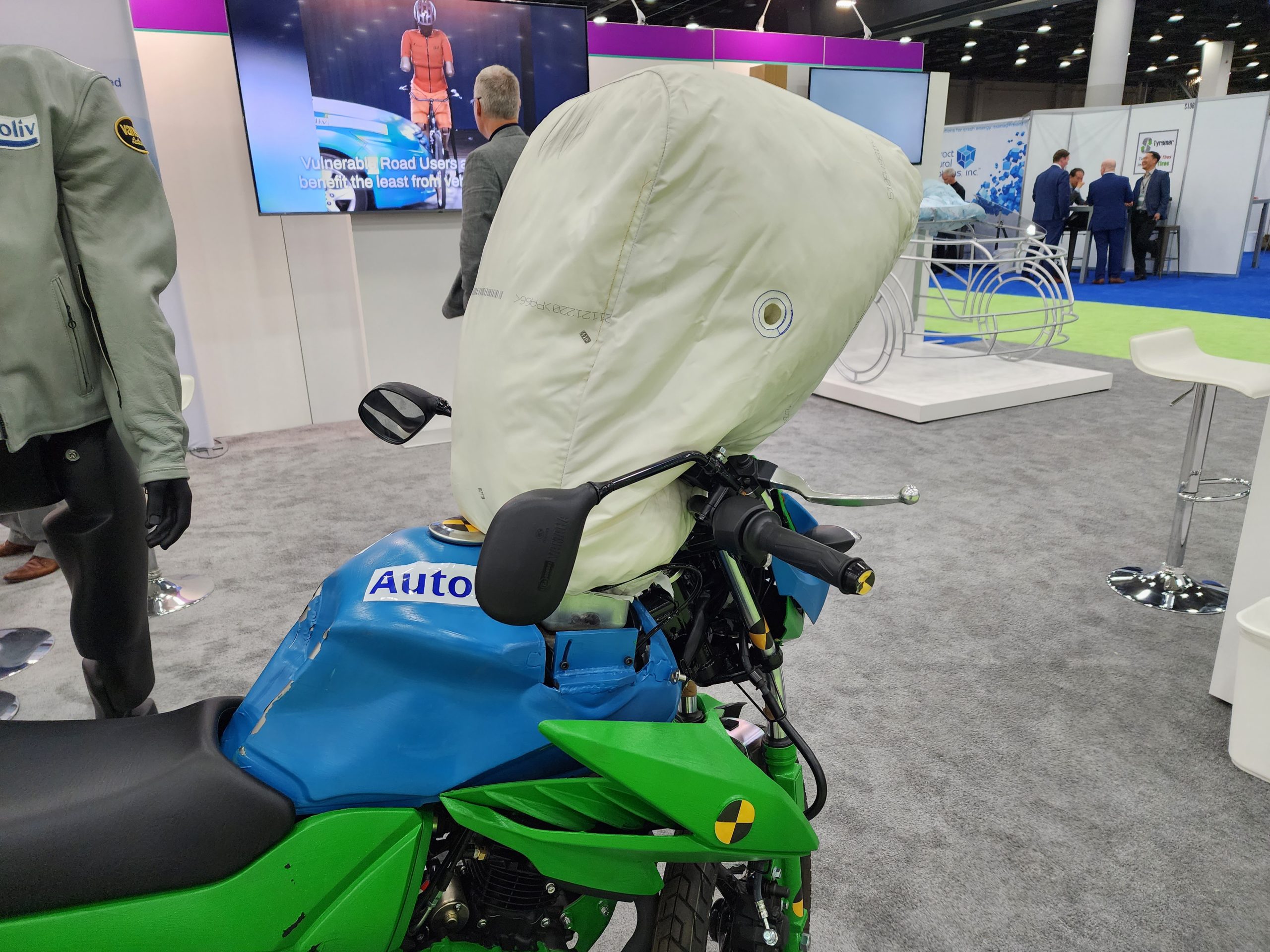 But Autoliv didn’t just come to the show with motorcycle airbags, it also brought a motorcycle airbag jacket, a delivery robot airbag, and airbags for riders of Bird and similar city scooters. 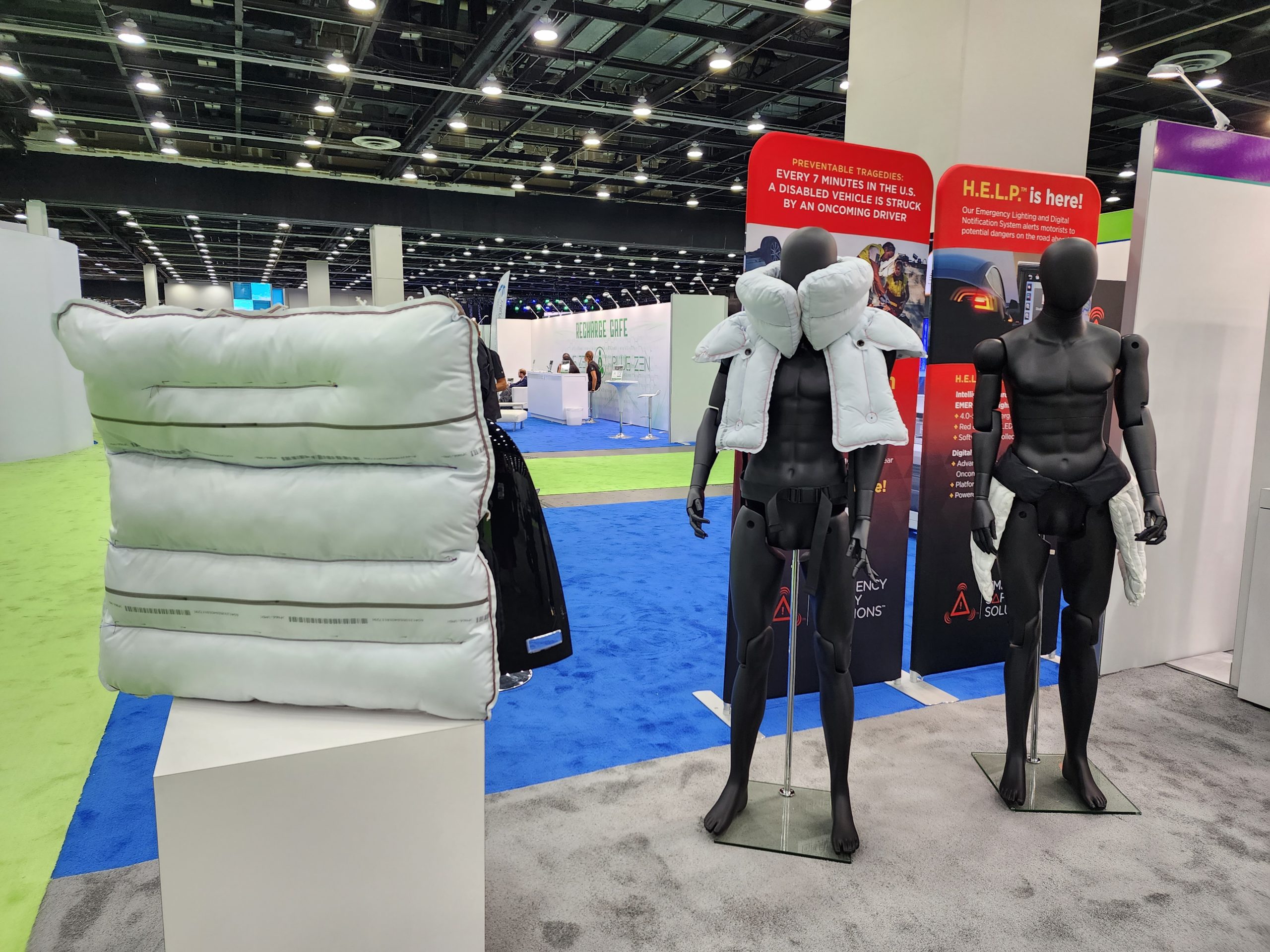 As you could probably guess, the people riding those little scooters zipping around major cities can get pretty banged up in a crash. In the UK, there were 1,280 collisions involving eScooters in 2021. The statistics here in America don’t look any better. Between 2017 and 2020, there were more than 190,000 emergency room visits resulting from crashes with those little scoots, and these injuries often lead to head injuries.

For that, Autoliv has developed an airbag that covers the top of the torso, neck, and some of the head during an incident on an eScooter. 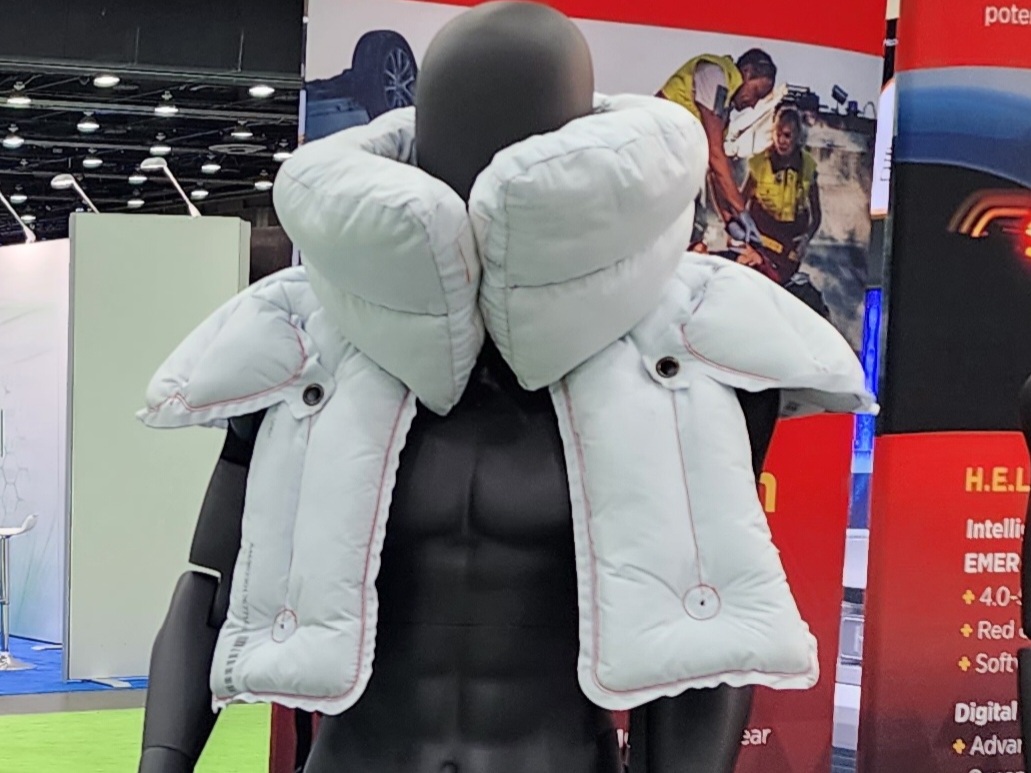 Autoliv’s idea here is that you won’t bang up your noggin if your head never hits the ground in the first place. Like the motorcycle airbag, Autoliv does not have a timeline on the rollout on this creation. How the rollout would work is also unclear. So many of these scooter riders don’t wear helmets, so would they don an airbag?

Finally, the last airbag that caught my attention is one for your grandma and grandpa. Hip fractures are a serious concern for the elderly. Some 76,000 hip fractures happen every year in the UK, and many senior citizens die within the year of their hip fracture. More never fully recover. Once again, things are worse in the USA, where some 300,000 senior citizens are hospitalized for hip fractures.

To help reduce these numbers, Autoliv has developed a belt that an elderly person can wear that will inflate if they fall. 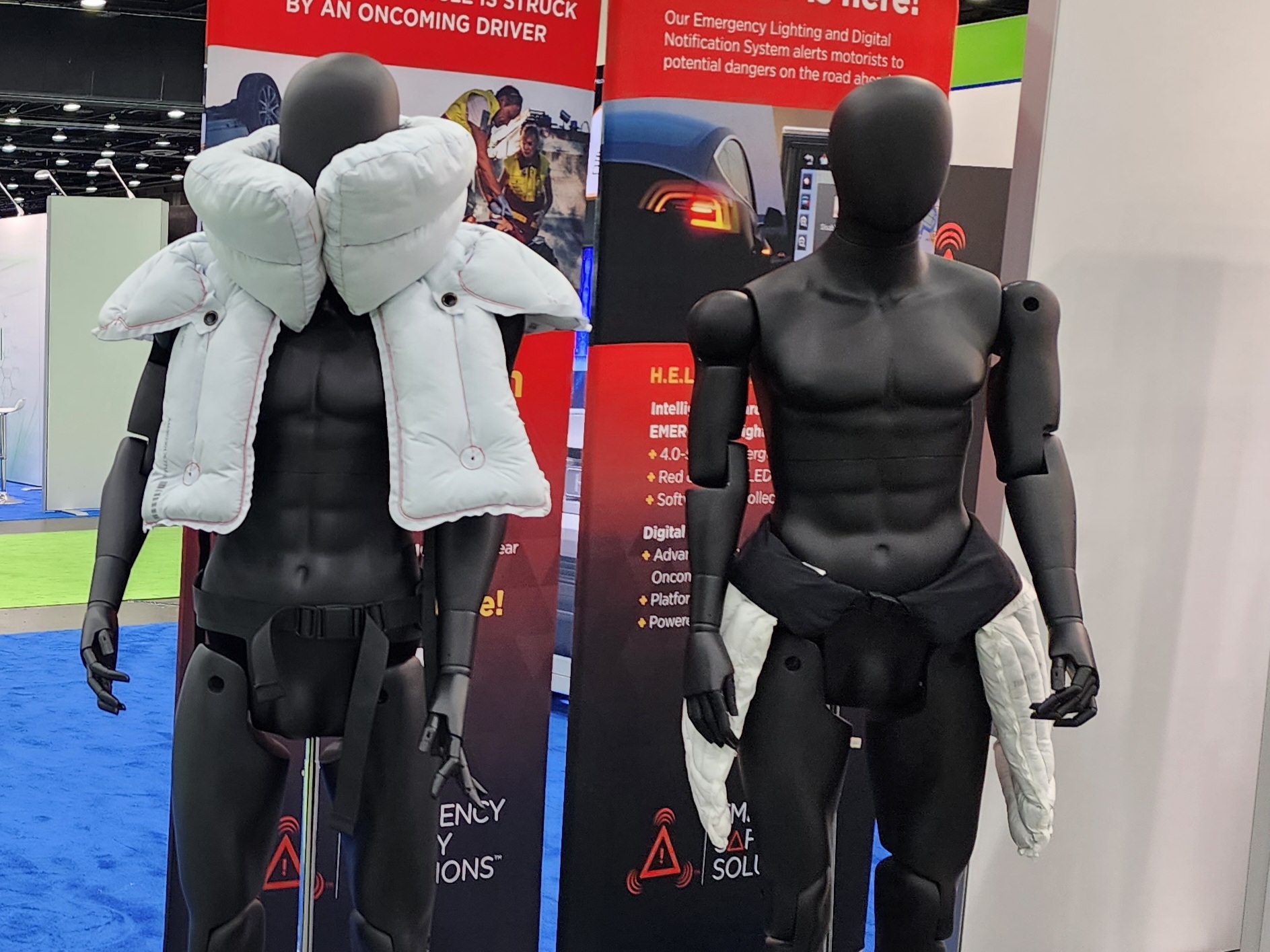 Autoliv’s rep told me that like the motorcycle bag, it inflates using pyrotechnics. While some wearable airbag solutions may use tiny CO2 cartridges, the company believes that pyrotechnics are the best way to inflate an airbag the quickest.

Amazingly, Autoliv is not the first to make an airbag for hips. There are all kinds of startups out there with different kinds of garments designed to reduce or eliminate injuries from falls. Some of these are belts, vests, or even entire hoodies. A Virginia Tech study found that an airbag can reduce impact forces by about 85 percent, which is below the threshold for hip fractures. Sadly, Autoliv didn’t give me a timeline for this product, either, but it sounds like a good idea. 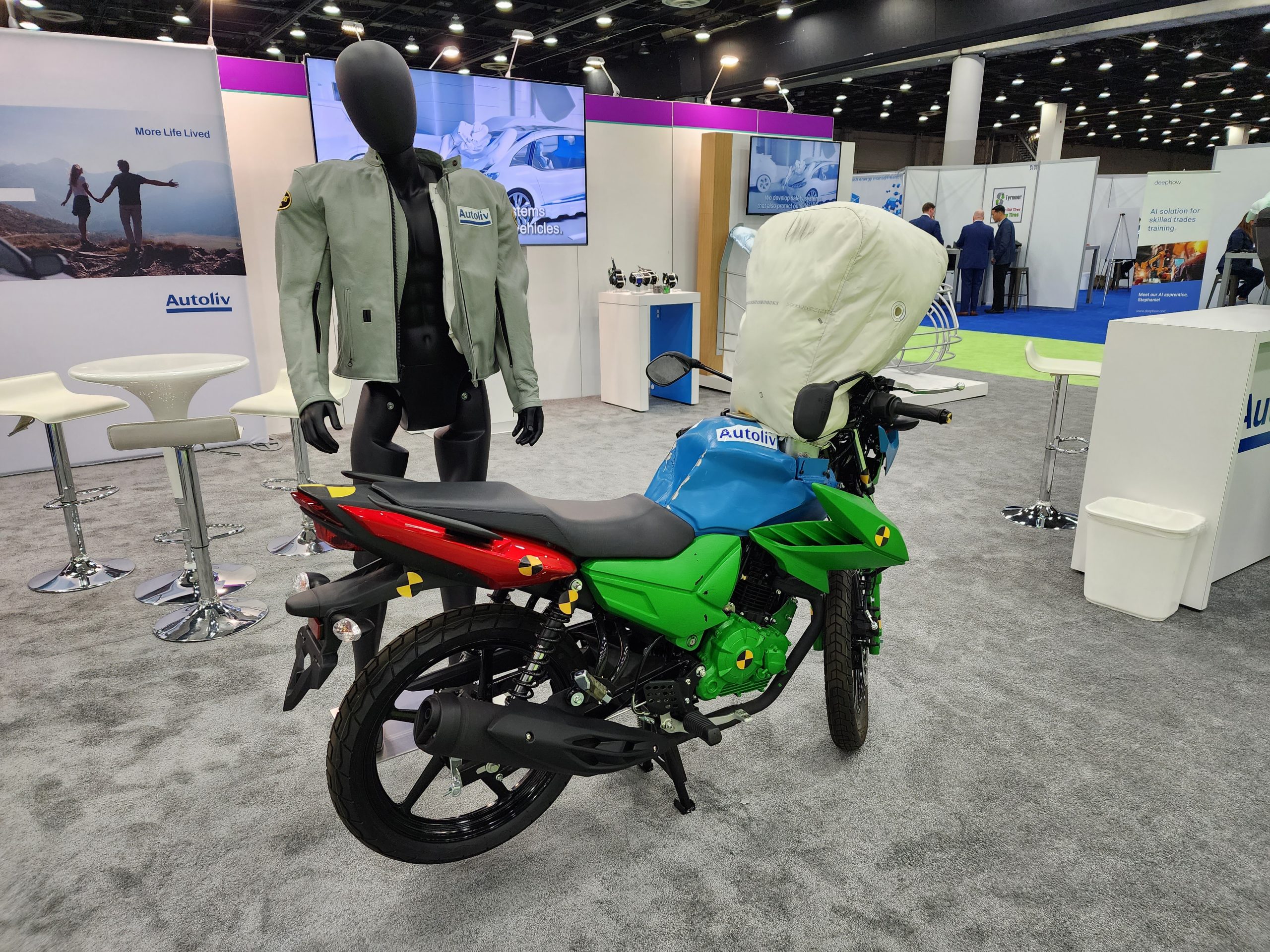 Autoliv impressed me with its display, and made me laugh just a little at the thought of putting an airbag on everything. It’s neat to see the company branching out from automotive-related products and into motorcycles, pedestrians and healthcare. Hopefully, we’ll get to see these things for real one day.

Mercedes is a lifelong fan of all things powered by an engine. When she isn't driving one of her five Smart Fortwos or her 14 other vehicles she could be found in the cockpit of a Cessna 172 or perhaps swimming in any body of water that she could find. She also has a deep love for buses of all kinds. Please send her buses. mercedes@theautopian.com Instagram: @mistymotors Twitter: @Miss_Mercedes30 Facebook.com/neonspinnazz
Read All My Posts »
PrevPreviousFormer Apple Chief Designer Sees Physical Buttons Returning To Cars
NextThe Clever And Easy Way To Turn Your Van Into A Camper For Less Than $10,000Next