Some of the biggest news in aviation right now is what new companies are building some type of vertical takeoff and landing aircraft, and almost all of them make big claims to revolutionize mobility. But a lot of them either don’t exist or don’t even come close to their claims. A company called Air is making the same claims as everyone else, yet for once, the product is actually practical.

Air was founded in 2018 as a company called Polarity Mobility. Back then, the Israel-based company immediately got to work on a personal electric vertical takeoff and landing aircraft (eVTOL). 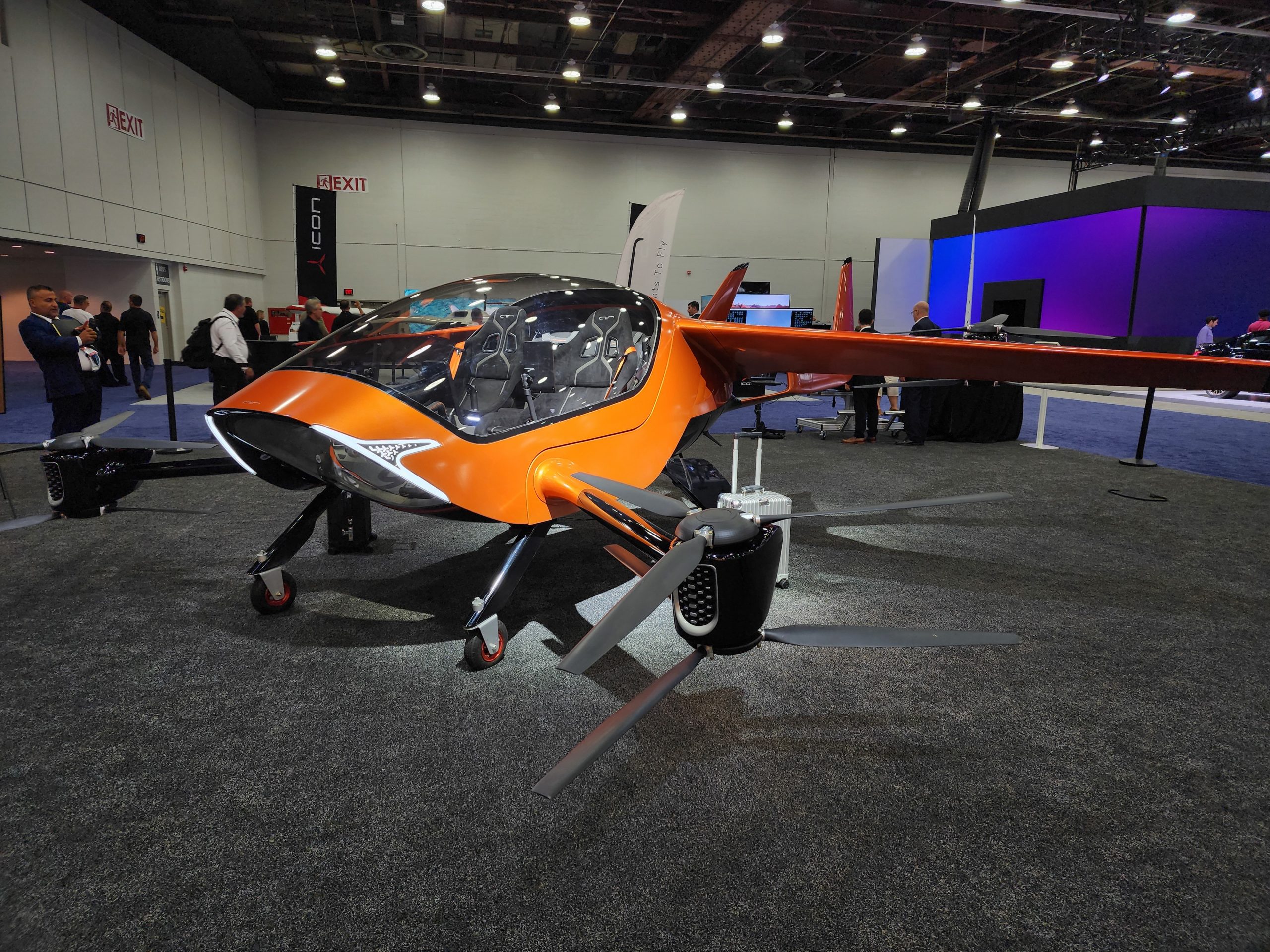 This space is crowded with competition from Opener, Jetson Aero, SkyDrive, Lift, Next, HoverSurf, and many more. All of these companies bill themselves as the future of transportation and some go as far as to claim that their flavor of eVTOL will make “everyone” a pilot.

As I’ve explained before, none of these companies have thus far fulfilled their lofty promises. Most of the aforementioned aircraft have a flight time of under 30 minutes and can carry no more than 200 pounds, including the pilot. And the limitations go on from there, as these machines carry just a single occupant, cannot fly at night, have no payload outside of the pilot, and cannot legally be flown anywhere near populations of people. Since most of them fall into the FAA’s ultralight rules, their pilots aren’t trained, either.

These vehicles are often billed as “flying cars,” but they’re really not. You aren’t flying one of these to your office. Heck, you can’t even take one for a grocery run. And with prices hanging around six figures, the list of people who can afford them doesn’t encompass everyone by any means. That makes them more flying toys than a revolution.

And flying toys are great! Don’t get me wrong, I’d love to fly an Opener Blackfly or a Jetson One. Seeing the Blackfly at Oshkosh made my mouth drop. But I am too heavy to fly in any of these ultralight eVTOLs.

That’s where Air comes in with its Air One. 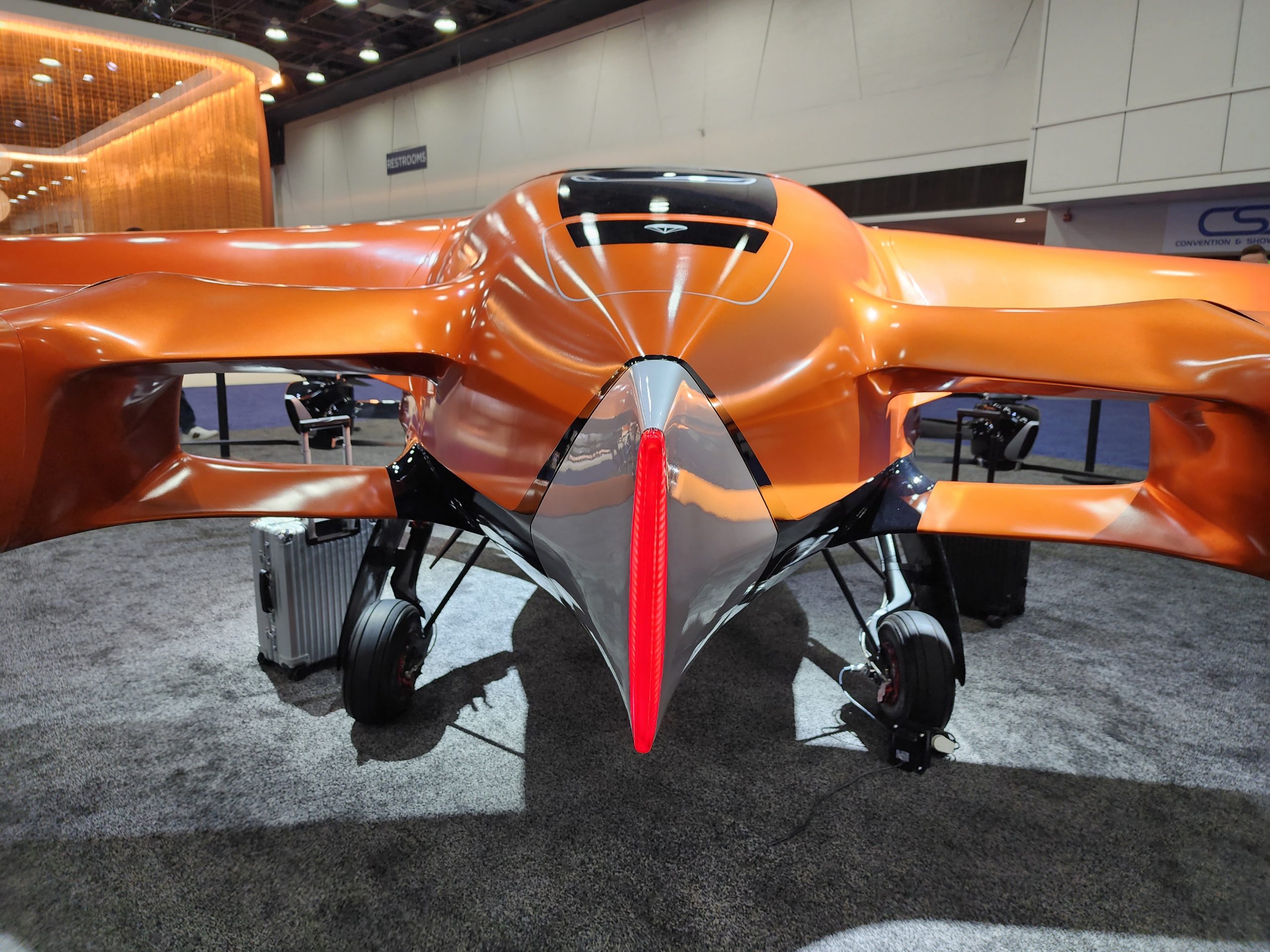 Air’s press release is not any different than those aforementioned companies, reading:

“Everybody wants to fly, and with AIR, they finally can. We’re creating a fun and functional personal airEVs that will blaze a path towards a new era of air mobility accessible to everyone.”

Now, let me immediately get this out of the way: Air’s claim is not exactly true. Its eVTOL will require its operator to have a pilot license. Which, in addition to its expected $150,000 price, makes the claim of “everybody” is a stretch. But if you look past the marketing jargon I think there’s something really neat here.

Air decided to make its eVTOL bigger, faster, and with a greater carrying capacity than the aforementioned ultralights. The company says that the One eVTOL can fly up to 155 mph, cruise at 100 mph, and stay in the sky for one hour. And when it’s parked, its wings fold so it can fit in some garages.

The One lifts into the sky using eight electric motors that add up to 771 total horsepower. Air’s reps tell me that means that the One can rocket to 1,000 feet above ground level in 30 seconds or less. 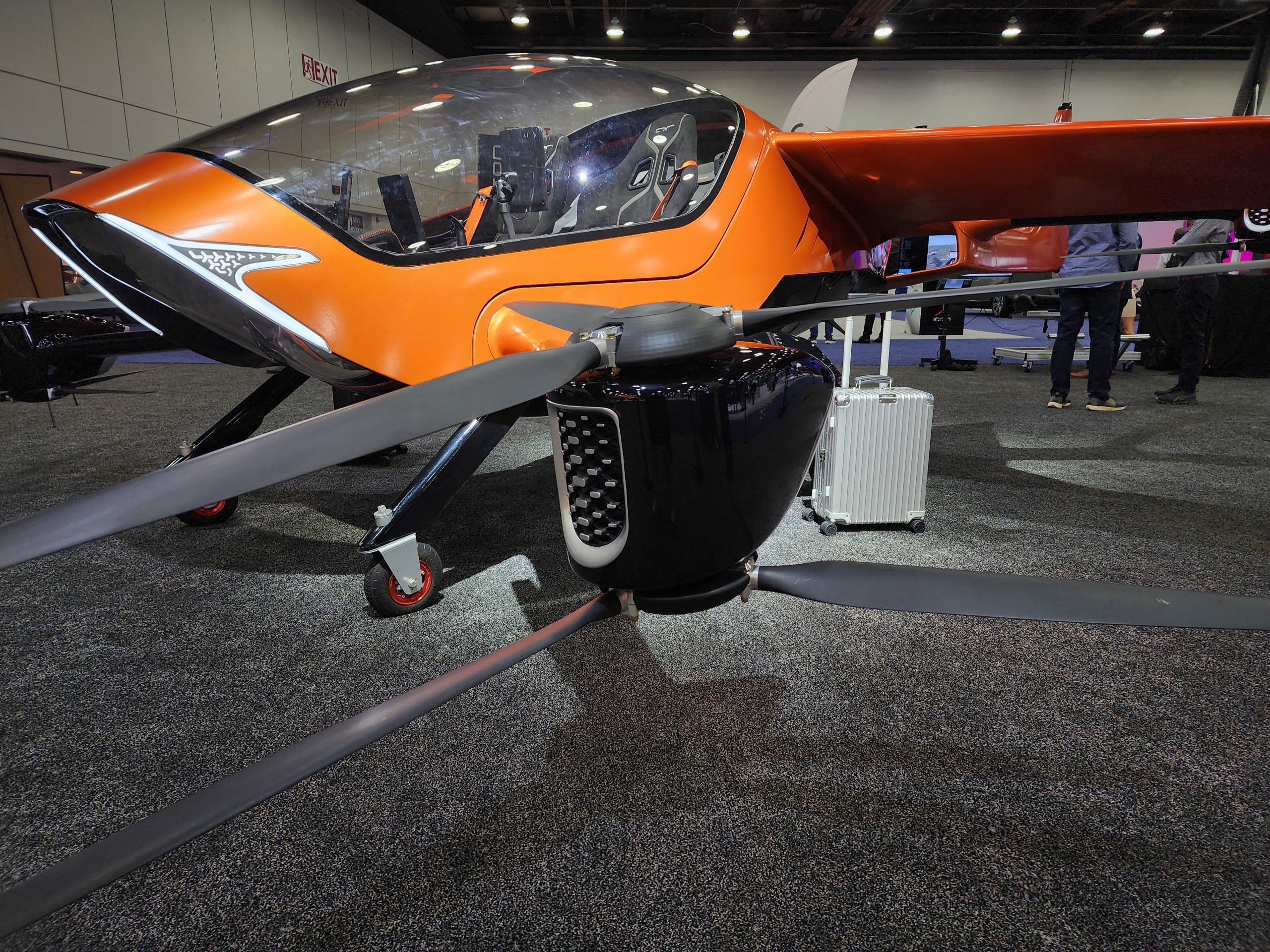 And the way it flies is like a drone. Forward motion comes from tilting the aircraft forward. That’s why the cockpit features a huge lower window. In forward flight, you’ll be looking through the canopy. But while hovering, that big lower window gives you sight of what’s going on. 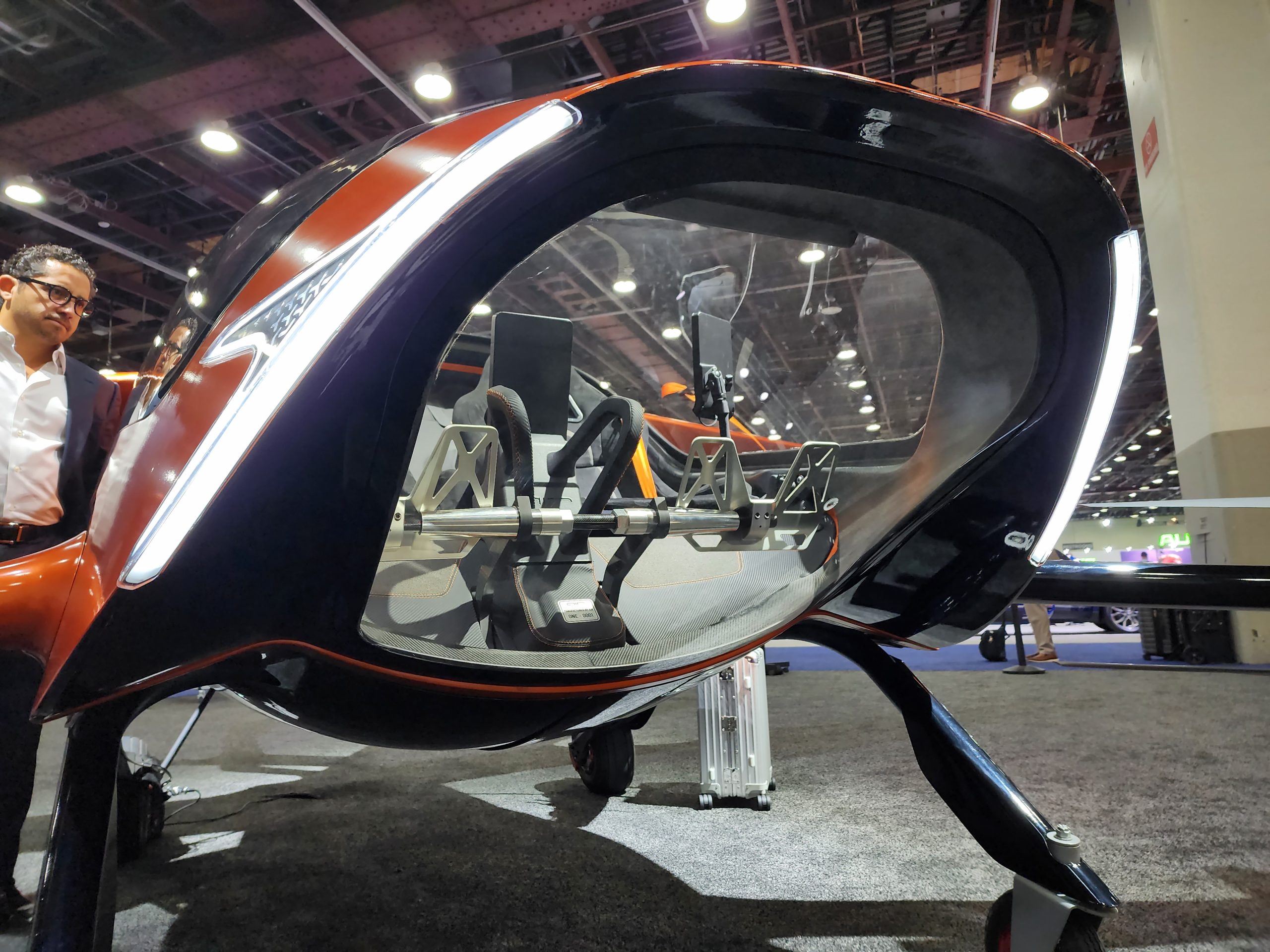 Air is baking in a lot of safety, too. It has a ballistic parachute system and redundant computer systems. The company’s reps tell me that it will fly even if four motors fail. Well, so long as those four motors aren’t all on the same side.

But my favorite part is the One’s usable load. While an ultralight eVTOL has to get by with just 200 pounds, this thing can haul two people and luggage adding up to 550 pounds. For reference, that’s just ten fewer pounds of payload than a new Cessna 172 Skyhawk carrying a full load of fuel. 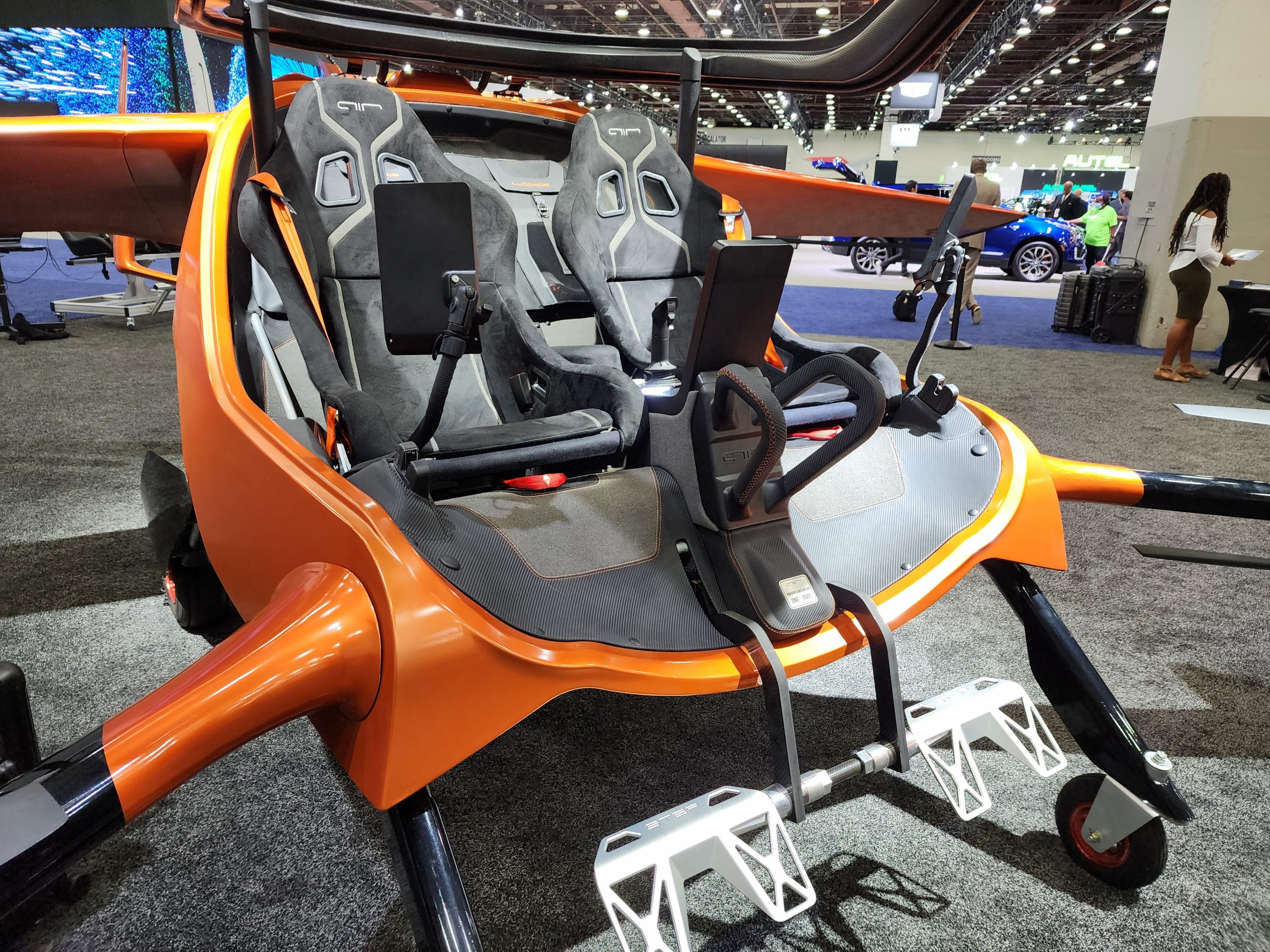 Though, as I said before, endurance is just one hour, or far shorter than the Cessna. A tradeoff is that this is less than half of the cost of a new Skyhawk. And, at least Air says that this can charge from zero percent to 100 percent in one hour.

Another thing that I like is that Air should have more freedom than an ultralight. The company is seeking FAA certification, but it’s not clear what it will be certified as. However, not being an ultralight means that the craft’s owner might be able to fly it from heliport to heliport between cities, which you currently cannot do with an ultralight eVTOL. 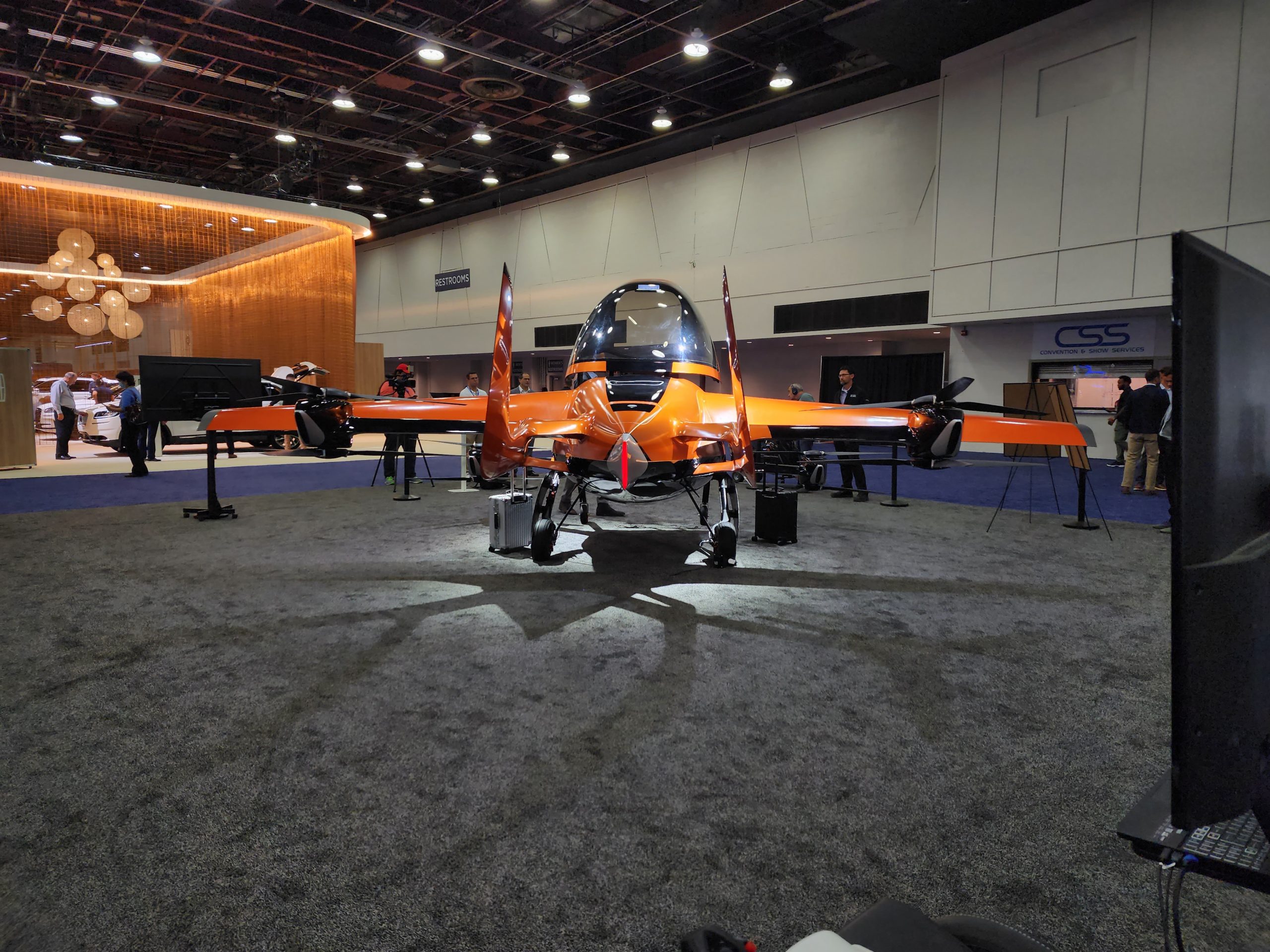 And of course, the pilot of this will be someone who already has training.

It also doesn’t appear to be completely vaporware, either. Air already has a full-size prototype that can hover. The company expects full flight testing and certification next year with sales beginning in 2024. I just wish that the marketing of these machines were closer to reality. Still, hopefully we get to see these in the sky and yours truly can tell you how they fly.

Mercedes is a lifelong fan of all things powered by an engine. When she isn't driving one of her five Smart Fortwos or her 14 other vehicles she could be found in the cockpit of a Cessna 172 or perhaps swimming in any body of water that she could find. She also has a deep love for buses of all kinds. Please send her buses. mercedes@theautopian.com Instagram: @mistymotors Twitter: @Miss_Mercedes30 Facebook.com/neonspinnazz
Read All My Posts »
PrevPreviousWhat The Hell Is Harbinger And Why Are They Showing A Boring Delivery Van At The Detroit Auto Show?
NextThe 2024 Ford Mustang Will Finally Let You Remotely Rev The Engine From Your Key FobNext