Facebook-f Twitter Instagram Rss
Menu
Menu
Home » What The Hell Is Harbinger And Why Are They Showing A Boring Delivery Van At The Detroit Auto Show?

What The Hell Is Harbinger And Why Are They Showing A Boring Delivery Van At The Detroit Auto Show? 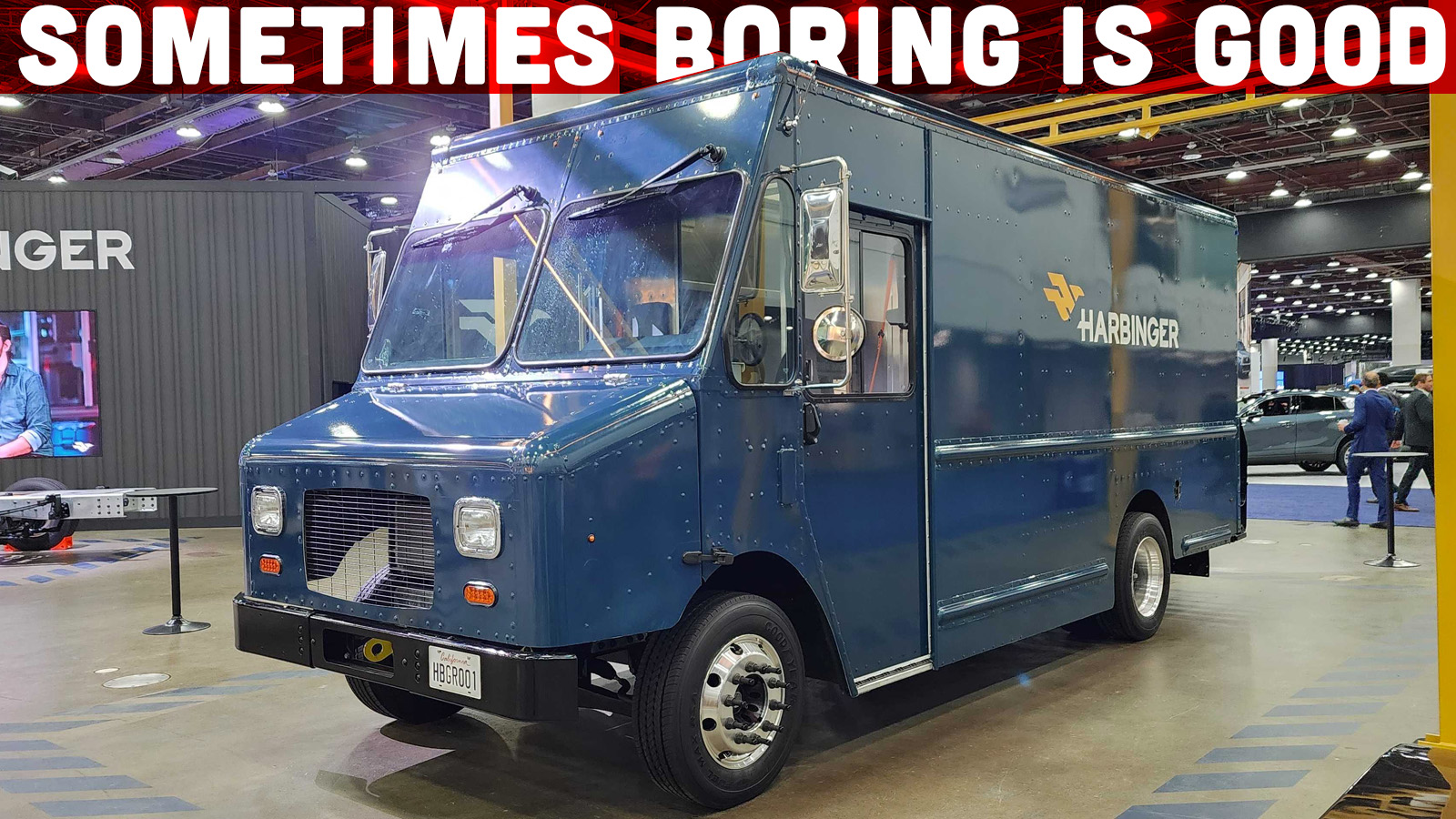 Looking at a map of the Detroit Auto Show, I noticed an odd, unfamiliar name surrounded by some big, well-known names. Right by Chevrolet and Lincoln and Cadillac and Buick was a sizable plot of show floor real estate marked HARBINGER. A Harbinger of what? That’s an ominous-sounding name, Harbinger, most likely because it’s usually followed with the words “of doom” or something similarly ominous. But when our own Mercedes Streeter went over to see what’s going on at the imposingly-named booth, she just saw a very mundane-looking delivery van. So what’s going on here? Who is Harbinger, and what are they doing at the Detroit Auto Show?

That blue van up there looks to be an off-the-rack Grumman MT45 stepvan, also sold as a Freightliner MT45, or a Morgan Olson RouteStar, or some confusing combination of those names; it’s a boring, useful delivery van, and I think that’s the whole point. You see, Harbinger is in the business of making electric delivery van chassis, and I think they’re very smart to make them work with one of the most common van bodies available instead of succumbing to the temptation of making something sleek and cool and new looking that will get a lot of attention, but will be expensive and effectively unavailable.

Harbinger’s goal is to make medium-duty commercial EV platforms that are “priced for zero acquisition premium,” which I believe simply means that there’s no cost penalty for a company choosing to get an EV delivery vehicle over a combustion one.

Harbinger’s main product seems to be this chassis, designed for Class 6 19,501 to 26,000 pound medium-duty trucks – think FedEx or Amazon trucks, beer trucks, school buses, that sort of thing. Motorhomes sometimes used these chassis, too, so perhaps that could be a use case for these in the future as well. 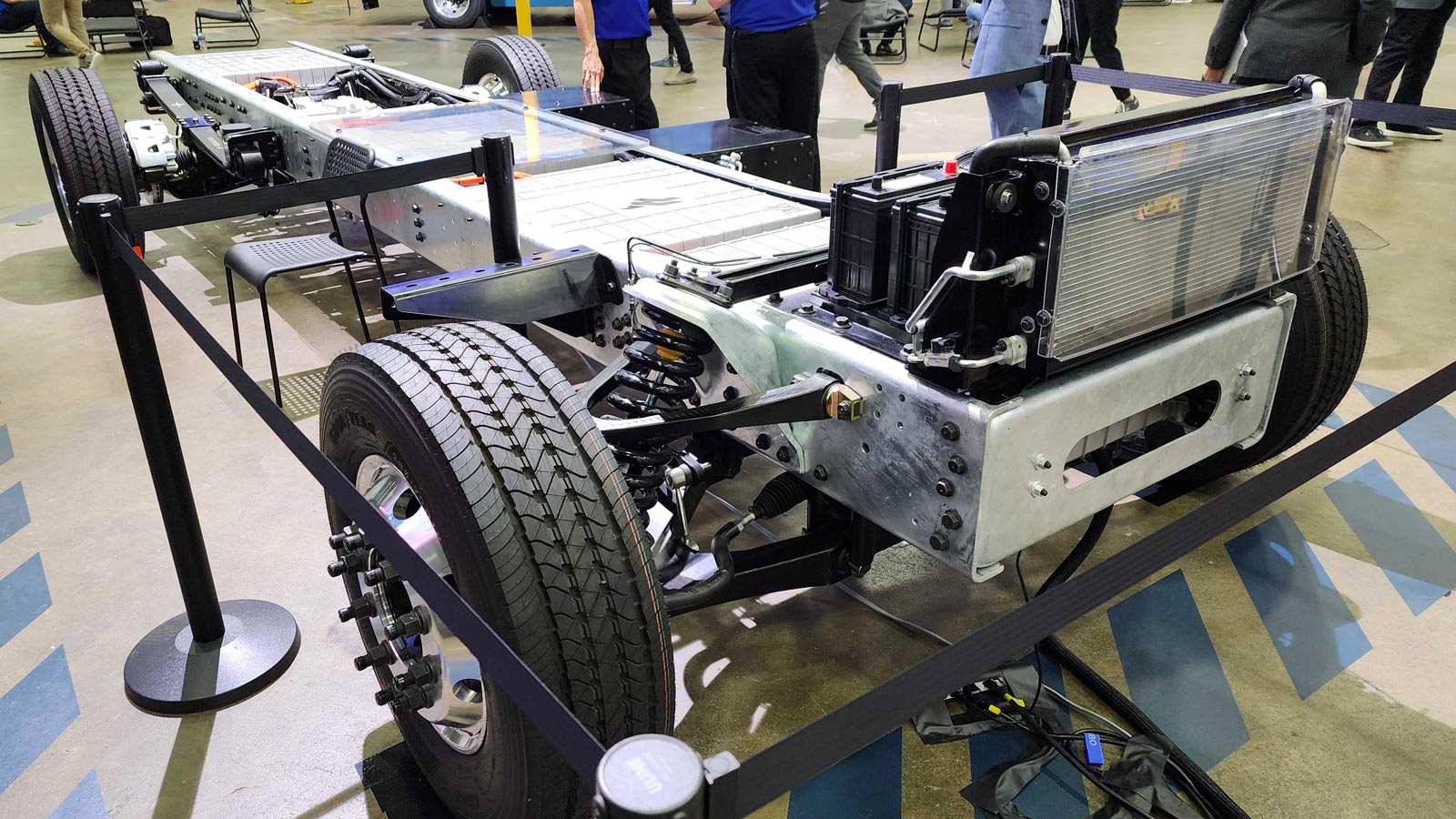 Here’s a breakdown of what’s going on this chassis – which appears to be made to be compatible with the same hard mounting points as conventional step-van chassis like the GM P30 or Chevrolet W-series chassis. That seems to be confirmed by Harbinger:

Harbinger’s scalable stripped chassis has been built to support all of the popular medium-duty body types available today, including commercial walk-in vans, recreational vehicles, box trucks, and others. The front overhang is reduced by Harbinger’s innovative independent front suspension, and the tight integration of battery, powertrain, and frame allows a best-in-class floor height.  Steer-by-wire and brake-by-wire systems offer greater flexibility for driver positioning and prepares fleets for future innovations in autonomy and advanced safety.

Oh, right, I promised a diagram: 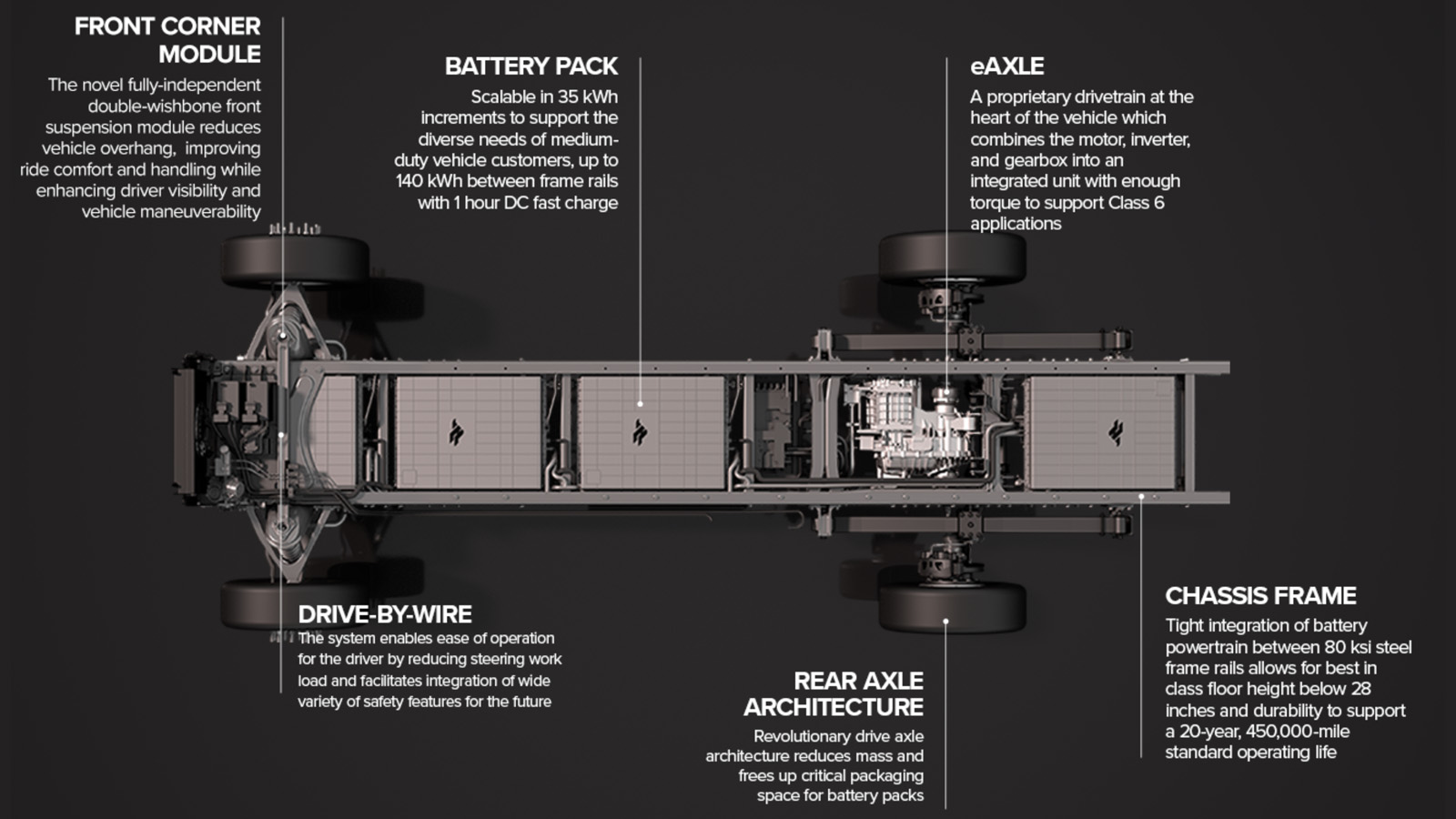 As you can see, it’s fundamentally fairly simple: a ladder-frame chassis with up to four 35 kWh battery pack modules (so a maximum of 140 kWh) housed in between the main chassis rails. The electrical system is 800V and uses readily-available 21700 lithium-ion cells, and the battery packs themselves look to be fairly easily removable and replaceable, which I suspect is a factor in the planned 20-year service life for this chassis.

It’s leaf-sprung at the rear and has coils and independent double-wishbone suspension up front. 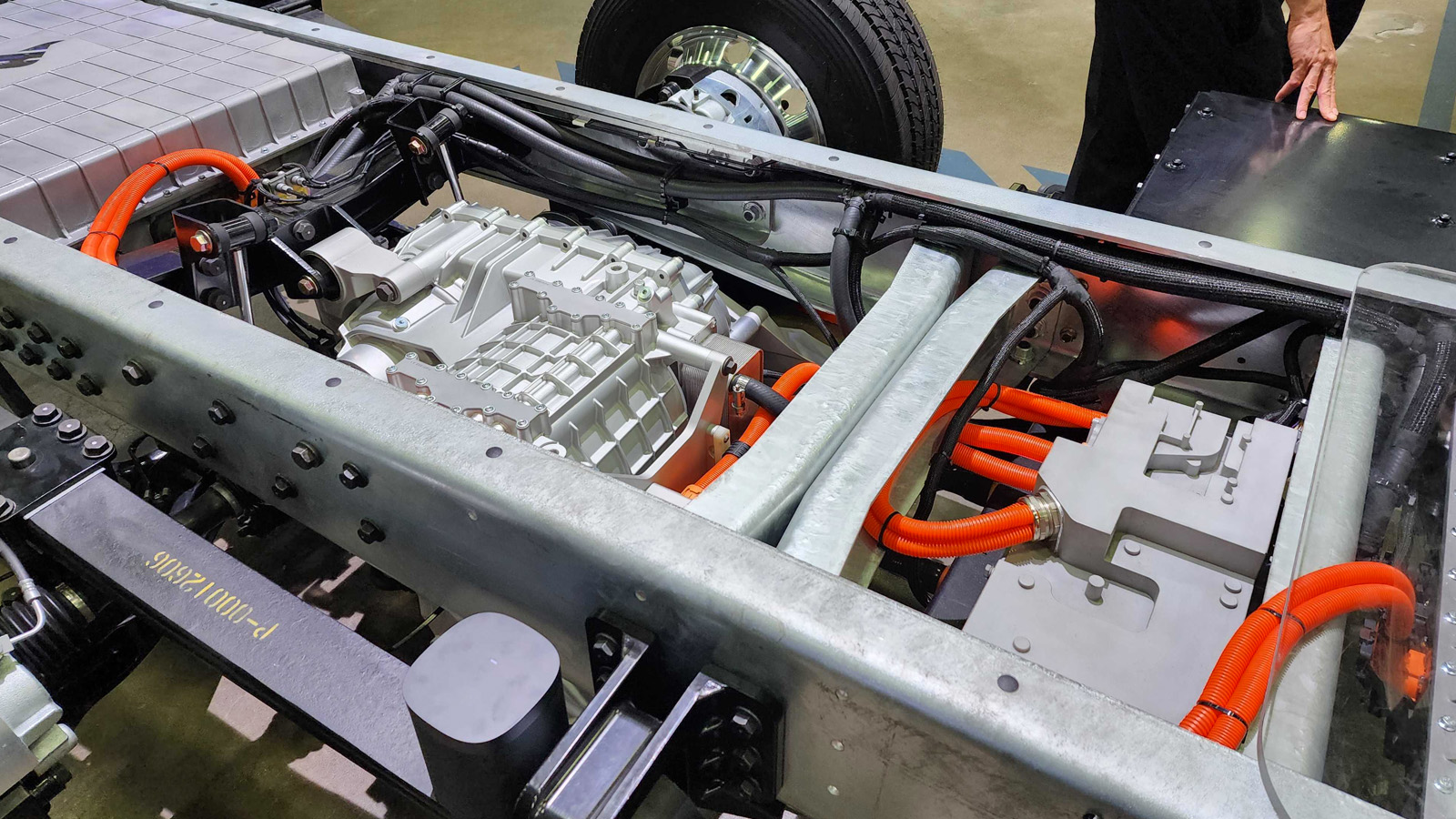 The motor unit is housed at the rear axle and is entirely below the frame rails, allowing for a fully flat floor. The motor unit is integrated with the necessary power electronics and makes 470 horsepower and 13,700 pound-feet of torque, which seems plenty.

So, with all this in mind, I think I’m getting a good idea of what Harbinger is: kinda boring. But, in the best possible way. This is exactly what the delivery market needs if its going to move to electrification: something that works with equipment that’s already in place: loading docks, racks and other interior van organizing systems, has driver and operator familiarity, and so on.

They’ll look like the same vans as before, and, if Harbinger is able to pull off what they’re claiming, they won’t cost any more than an equivalent gas or diesel van. If you’re not paying attention, you probably won’t even notice the difference, except the vans will be quieter. 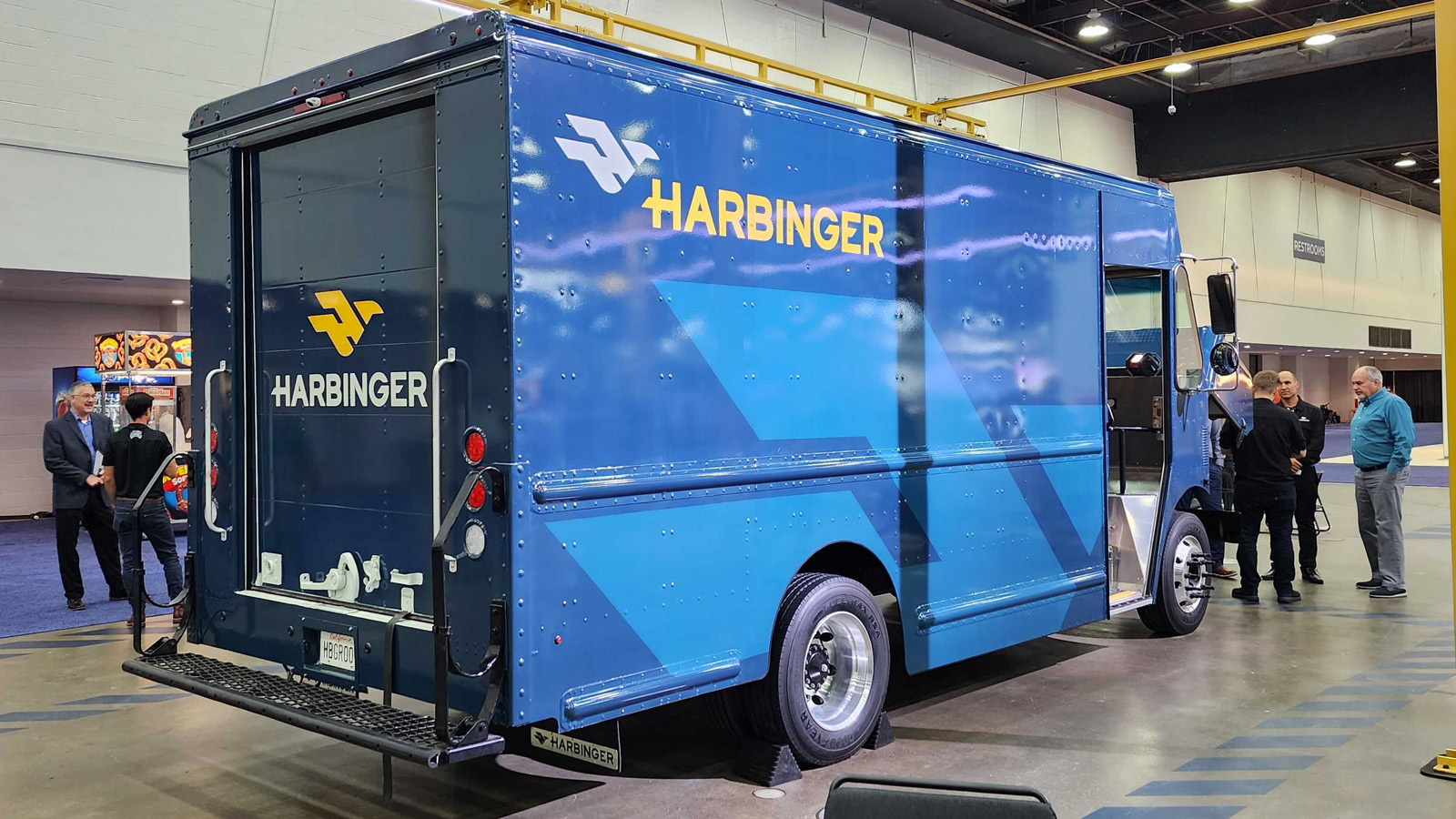 This is exactly what this segment needs, not an all-new EV van platform that optimizes everything. Harbinger’s approach allows for quicker transformation of existing fleets, with the biggest change needing to be the addition of charging infrastructure, something that one would hope could be paid for by the offset in fuel costs.

Really, this delivery segment is perhaps the best suited to electrification compared to almost anything else: mostly set, pre-defined routes of known distance and mileage that end with the vans back at a central location for recharging. Like school buses, this medium-duty delivery application feels tailor-made for the benefits and limitations of electric vehicles, and once you start thinking about how many gas and diesel-burning vans like these are out there, the scale of the benefit to local air quality and other environmental and resource-use factors is considerable.

This is one of those rare times I’m happy to see something boring at an auto show. Good job being dull, Harbinger!

I'm a co-founder of the Autopian, the site you're on RIGHT NOW! I'm here to talk to you about taillights until you cry and beg me to stop, which I absolutely will not. Sorry. Hug? Also, David's friend.
Read All My Posts »
PrevPreviousAutel’s 480 kW Charger Claims To Add 250 Miles To An EV In Just 10 MInutes
NextHere’s An Electric Drone You Can Fly In That Actually Might Make Some SenseNext