Are you tired of parallel parking your car every time you go to the store? Do you think your local driving instructor is wasting their time testing you on your parallel parking skills? Do you wish cars could do more than just drive forward and backward? Well, auto supplier Hyundai Mobis may have the answer for you as early as 2025 with its “e-Corner” technology that would allow their car to crab walk. The Bangles would certainly be proud!

How I Think It Works

First things first: Watch the video above. From what I can gather, the system looks like it uses electric hub motors and what appears to be a mechanism that can rotate the entire suspension a full 90 degrees. Put this at all four corners and the result is a car that can drive sideways or spin around on its own axis. 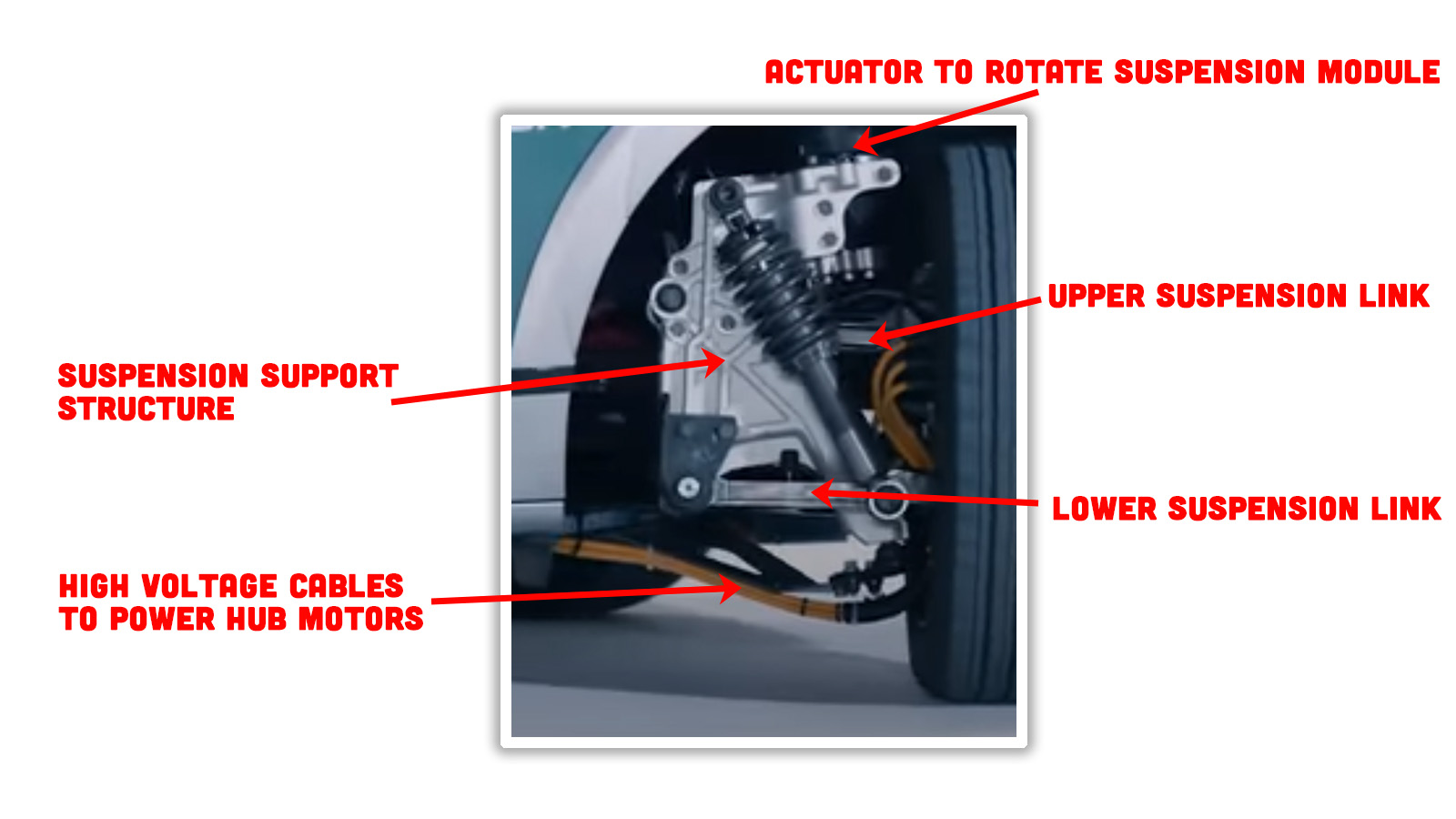 What you are seeing is the rear wheel in an almost fully rotated position and you can clearly see an upper and a lower suspension link connected to some sort of aluminum casting and to a knuckle of some sort that is buried inside the wheel. The entire assembly looks like its connected to an actuator at the top which is likely the device that rotates the whole thing. The reason I think the whole assembly has been rotated is that the suspension links are clearly more or less perpendicular to the wheel in the image above.

The orange cables are the high voltage cables that power the hub motors.

(Sidebar: High voltage cables in all EV’s are colored orange to clearly differentiate them from the standard 12V wires so that emergency personnel know what’s what when they come across an accident involving an EV. So, if you see orange cables in a car, it’s best not to touch them).

[Editor’s Note: It’s worth pointing out that in 2021, Hyundai Mobis first showed off a revised version of its 2018 e-corner design, with the revision enabling 90-degree turning. From the company’s 2021 press release:

Hyundai Mobis announced its success in the development of new technology, the e-corner module, which integrates the steering, braking, suspension and driving systems into a wheel.

The biggest advantage of the e-corner module is that it does not require any mechanical connection between parts, which thereby allows a better use of space within vehicle. Not only does it make it easier to change the wheel base, but it also ensures much more flexibility in designing the direction of doors and the size of the vehicle. It is essential for making PBVs that are designed to provide mobility services, for example for cafés and hospitals.

Here’s a clip from that press release:

And here are a few photos showing the company’s “e-corner” module: 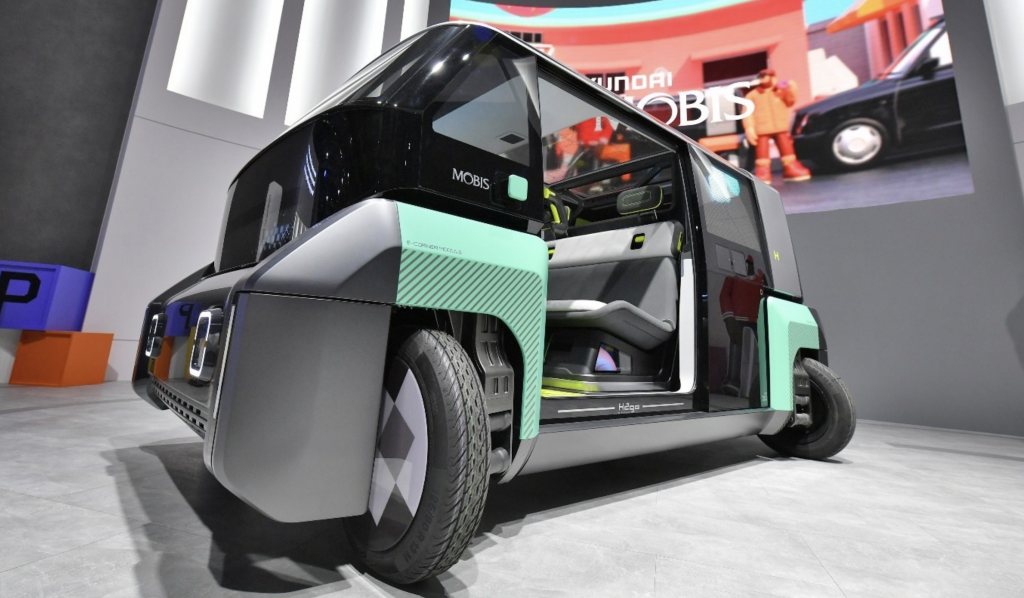 Anyway, back to Huibert. -DT]

Potential Compromises Associated With This Technology

Now that we know how Hyundai is likely accomplishing this party trick, we need to talk about if this is actually a good idea. One of the primary functions of a car is to protect its occupants in the event of a crash with an object like another car or a tree. This is done by placing structural parts called rails in strategic places at the front and rear of the car. When the car hits something (or gets hit by something in the case of a rearend collision), these rails crumple in a very controlled way to absorb the energy of the impact. Since protecting the occupants in a crash is such a critical function of a car, there are many government regulations as well as industry standards that cover the ability of the car to perform this function. These regulations and standards differ slightly by country and region, but all require that the basic box that forms the passenger compartment remain undeformed within specific limits. The floor under the driver’s feet can only deform so much, otherwise the driver’s ankle could be damaged. The steering column can only move so much, otherwise the airbag would end up out of position and the driver could be hurt. Those are just two examples of the many requirements automakers must meet when they design a car.

The blue parts are the rails that stick out and support the front and rear bumpers. If we place these rails all the way outboard, they line up with the edges of the passenger box, like this:

You can imagine what would happen in a crash. The rails would impact the object and crumple, pushing directly on the sides of the passenger box. The box itself would likely remain mostly intact.

Now let’s imagine the blue rails are located right in the center of the car, like this.

If these rails hit something, they would push right in the middle of the passenger box and it’s easy to imagine how this would cause the front edge of the box to buckle rearward and into the passenger compartment. To prevent this, we would need to make the front edge of the compartment extremely strong and consequently extremely large and more expensive.

So why not place the rails right out at the edges of the car? The problem is that we need a place for the tires to go. Not only that, but we need space for these tires to move up and down and in the front, rotate with the steering as well. This has the effect of pushing the rails inboard and away from the edges where we really want them to be. Of course, the more the tires steer, the more we need to move the rails inboard to make room for them.

Now let’s get back to the Hyundai. In a standard car, the front tires steer approximately 45 degrees at full lock and the rear tires don’t steer at all. This means the rails will look something like this:

But now let’s suppose we are able to steer to tires a full 90 degrees, and not only that, but we will do this in the front AND the rear. Now the rails would need to look something like this:

You can see how our fancy crab walking suspension has pushed the body rails way far away from where we would ideally like them to be. This makes the job of managing the energy of a crash considerably more difficult.

But there are also more practical reasons why turning the suspension a full 90 degrees may seem like good fun but may not really be all that practical. Look at the potential space we have for luggage. EV’s have a distinct advantage vs ICE cars in that they can often have storage space in the front of the car, i.e., a frunk. Looking at the difference between a normal car: 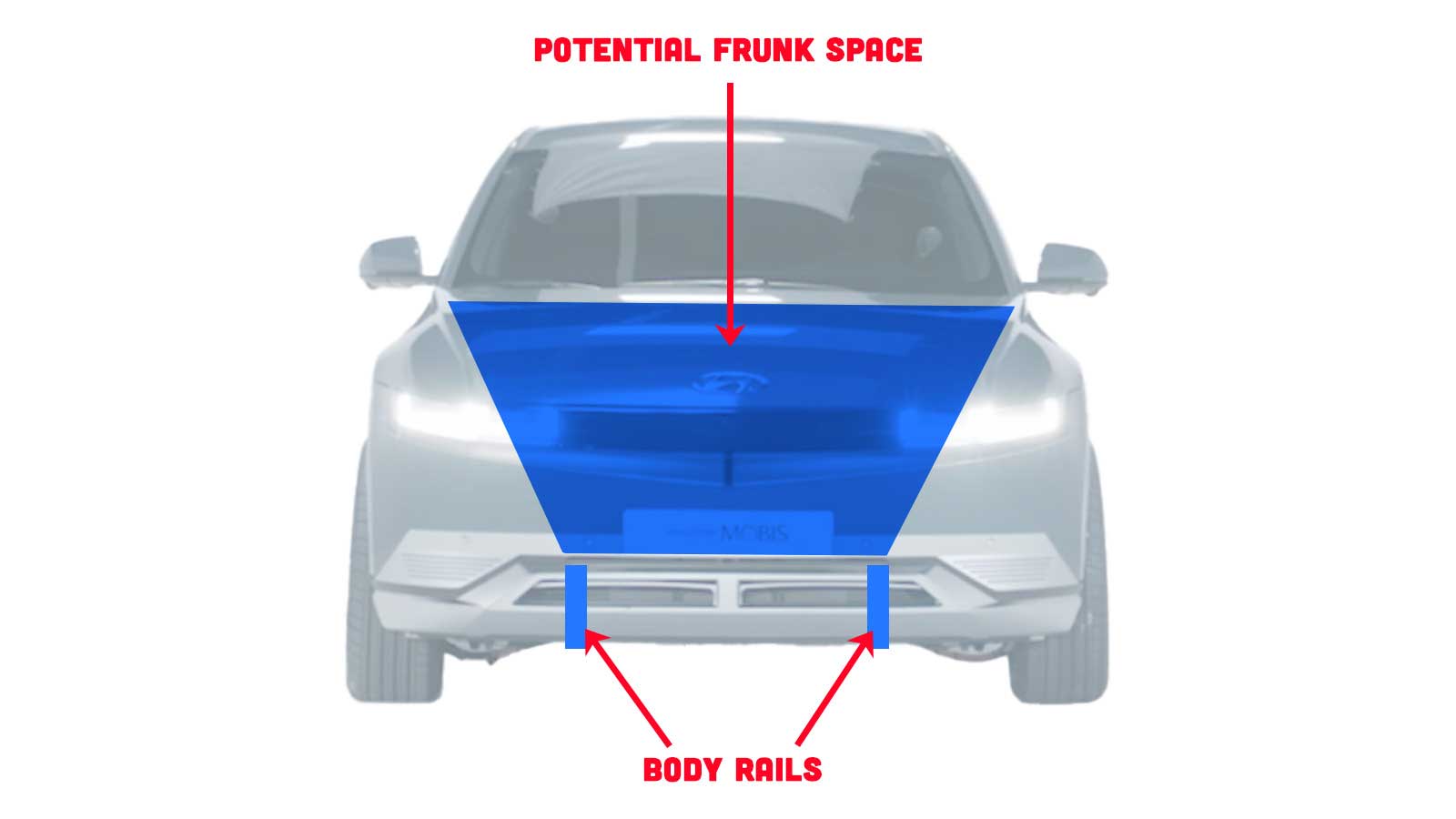 and a crab walking car: 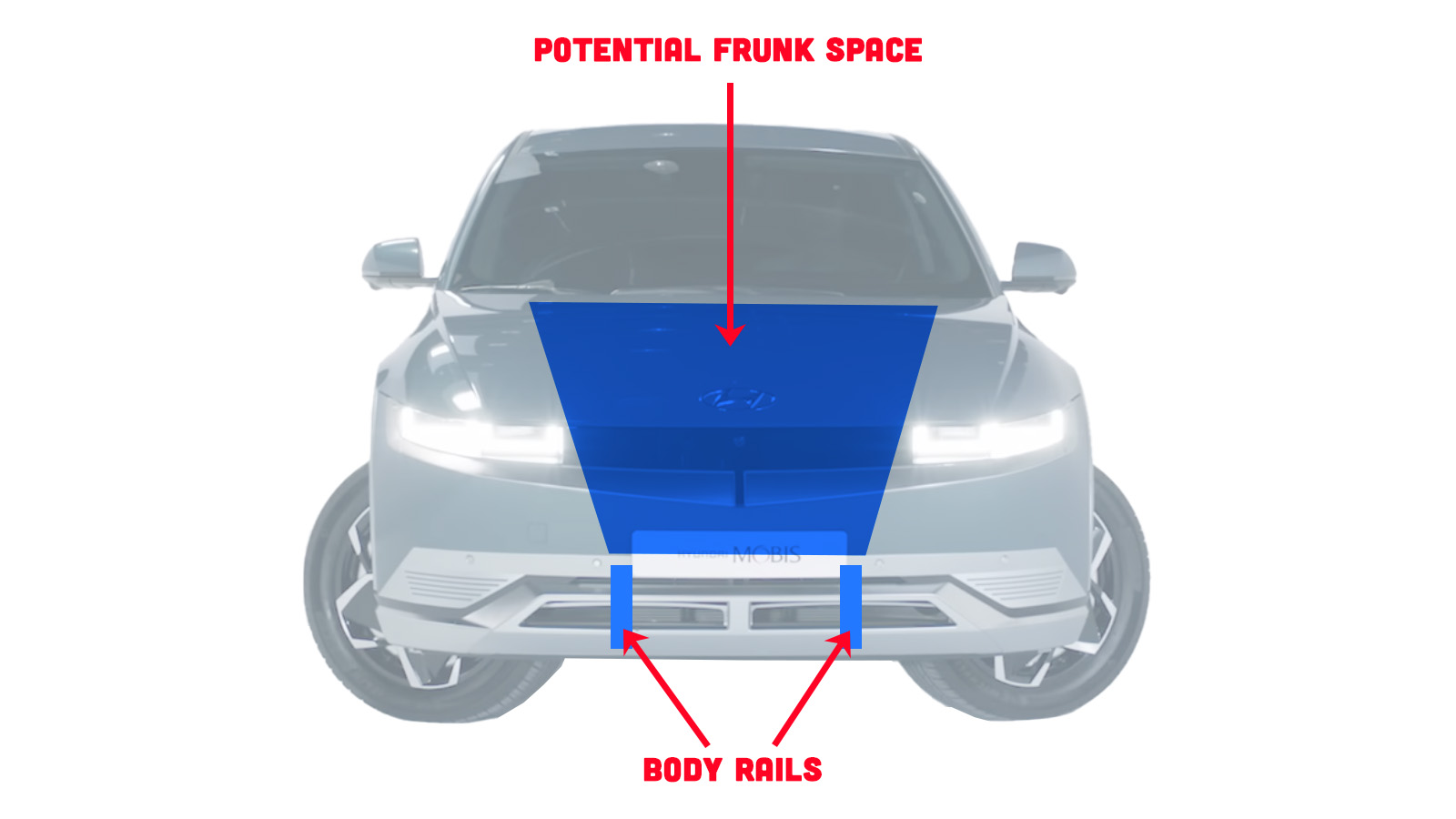 We can see that the space available for a frunk is a bit smaller in the crab walking car. I could probably live with a smaller frunk, or no frunk at all, but when we look at the rear trunk space, it’s a different story. Here is the potential space in a normal car: 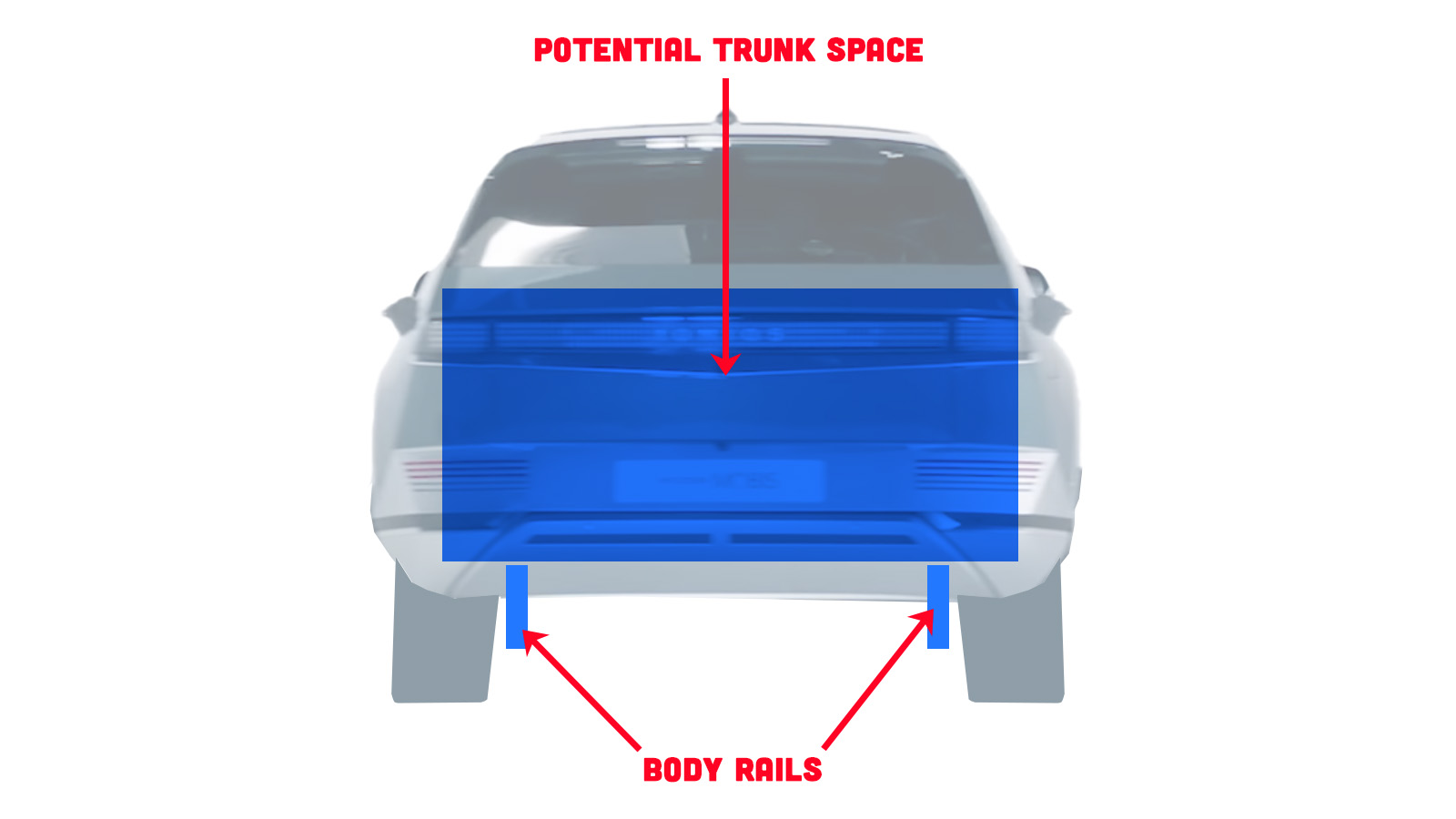 And here it is in the crab walking car: 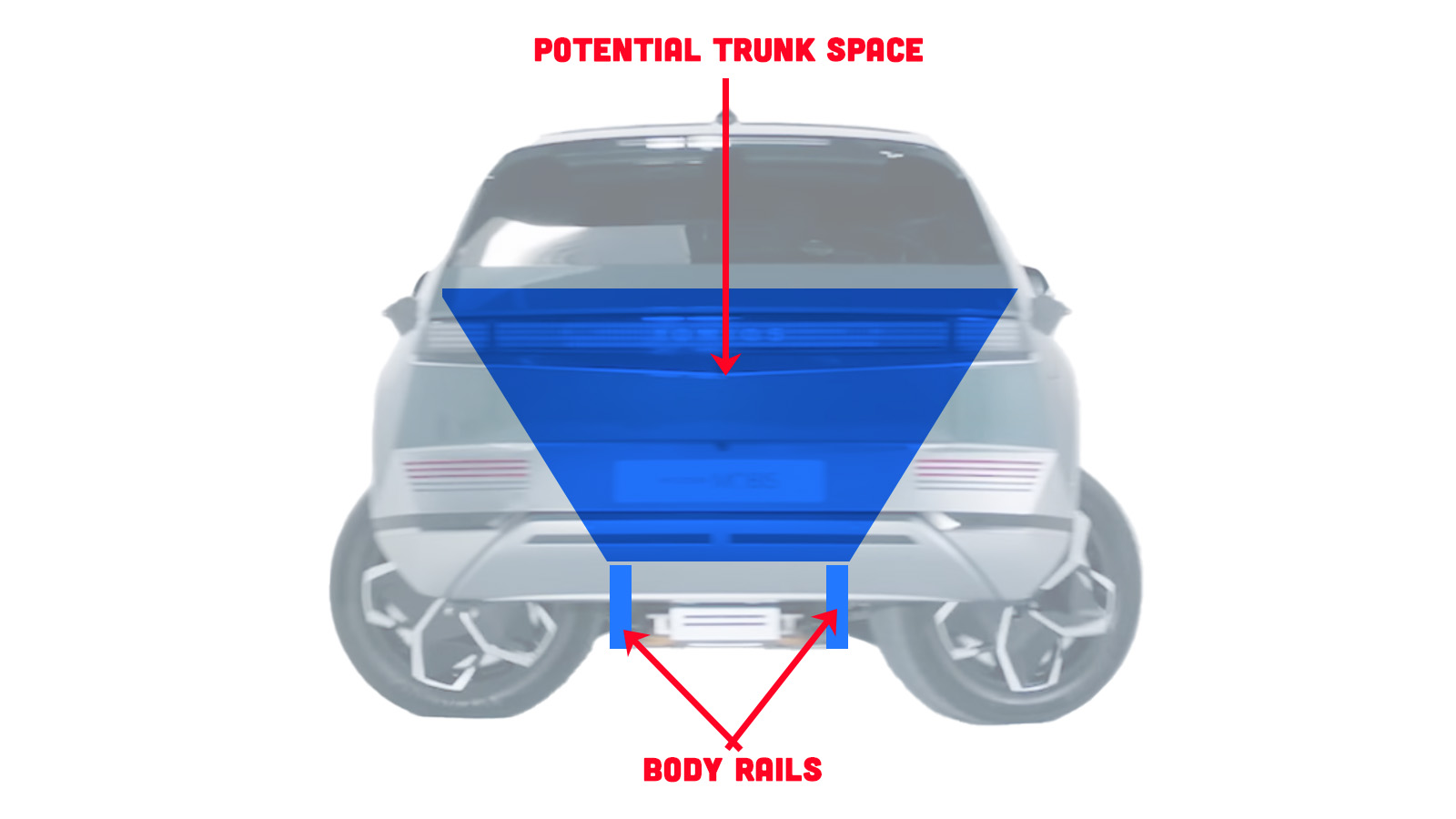 The reduction in floor width in the crab walking car is huge and to me borders on unacceptable. There is a big loss of storage space caused by having to provide space for the rear tires to steer.

Is It Worth The Tradeoff?

In summary then, we have a car that can drive sideways and can turn on its own axis, but we’ve lost a bit of frunk space and a massive amount of trunk space. We’ve also given the engineers a much tougher job making the car safe in a crash. From my personal experience, if you make the engineer’s job tougher, they will probably end up making things heavier and more expensive. All of that because someone is bad at K-turns and parallel parking?! Doesn’t seem worth the trade-off to me.

Now let’s hear from you all. Do you think this is a good idea or is it a party trick best left in trash heap of innovation? Do we really need a car that can drive sideways?

I have been an automotive engineer for all 31 years of my career, mostly leading chassis design work. Some fun suspension projects I led: The 2005 Ford GT and 2012 Tesla Model S.
Read All My Posts »
PrevPreviousGM Admits The Cadillac Lyriq EV Isn’t Where It Needs To Be Yet
NextTesla Owners Are Incredibly Unhappy About Recently-Announced DiscountsNext