More than an actual functioning person, I think sometimes that perhaps I’m really more of a collection of automotive fetishes crammed into a bio-mechanical framework to move those fetishes from place to place, powered by Diet Cokes and salami. I think by now you’re familiar with these fetishes, one of which is vehicular packaging. That’s why a picture like the one above, which doesn’t even feature an actual car, really, draws me in like ham to a powerful ham-magnet. It’s a physical diagrammatic representation of a Volkswagen Type 34 Karmann-Ghia, and it’s glorious.

You know about the Type 34 Ghia, right? Also known as the Type 3 Ghia, or the VW 1500 Ghia, it was another take on the Karmann-Ghia formula: take a mass-market car chassis and stick a much prettier body on it. VW did this with the Beetle chassis and the original Karmann-Ghia, which I once talked about on video:

…and then they did it again, in a more up-market version, on their Type 3 platform, and with new, crisp, “razor’s edge” styling, as you can see in a page from the same 1963 brochure I got the packaging picture from:

It’s a handsome car! But, I’m here to obsess over packaging, and that’s what I’m gonna do, since this thing had fantastic packaging. The basic VW flat-four engine was modified for the Type 3s by having the cooling fan mounted low on the crankshaft, the result of which was that the engine package became really flat, like a suitcase. This was crammed under the rear floor, giving most Type 3s trunks at front and rear. 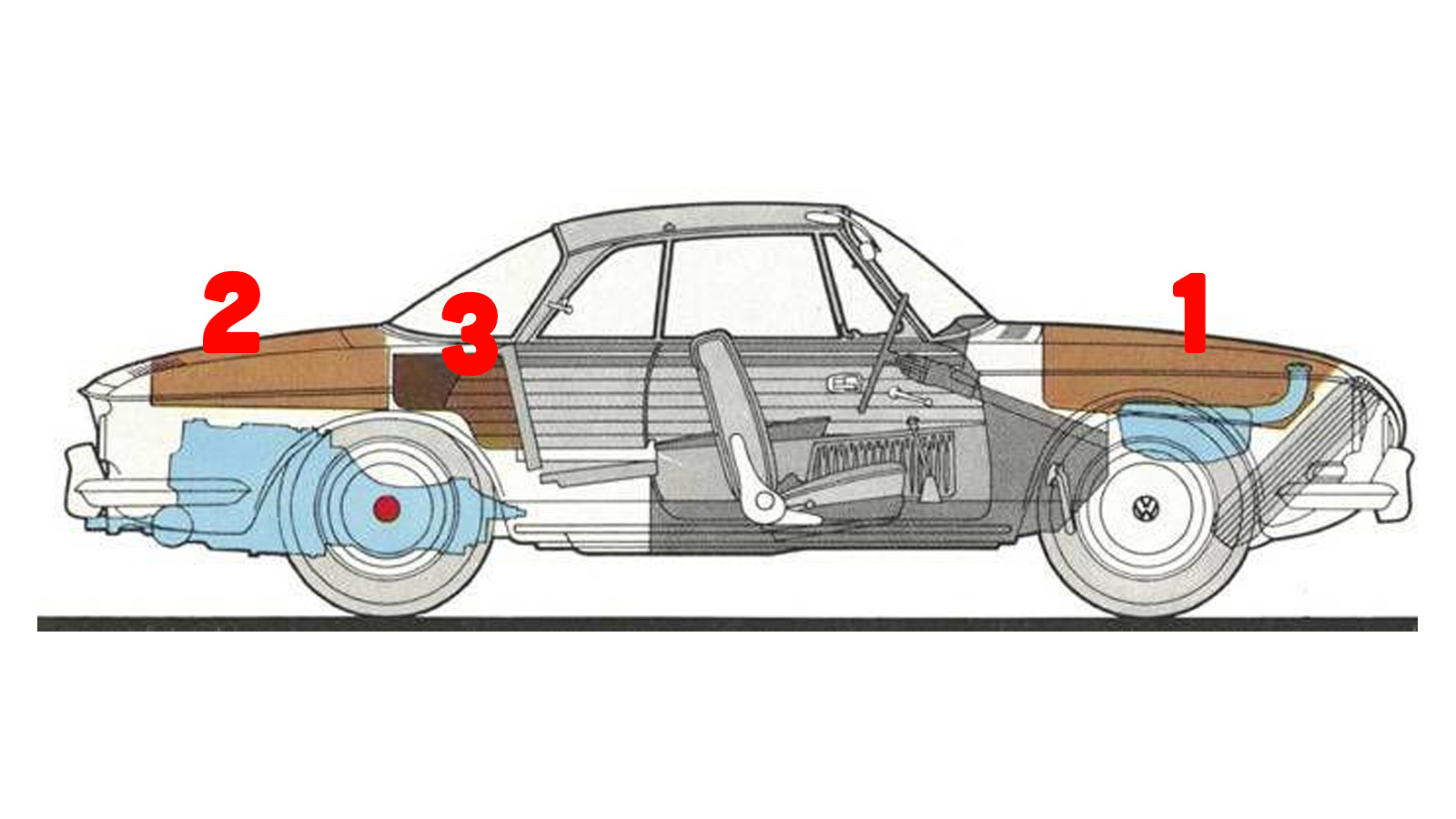 The Type34 Ghia was even a bit different, because it was one of the very few car with three separate cargo areas: front trunk, rear trunk (which was admittedly pretty shallow, but still) and a third enclosed compartment behind the rear seat. The top pic shows the rear seat folded down, making an interior large luggage platform, full of Louis Vitton bags, and the black bag over the trunk, but another page shows the seat up, with a kid and his favorite birdcage (?) sitting there:

Behind the kid is a suitcase in the behind-the-seat luggage well, and behind that is the trunk over the engine. Amazing! All that cargo room in a small sports coupé! I love it!

Also, a bird in a cage to entertain a kid on a road trip? I bet that kid bought a ton of Game Boys about 20 years later, just to make up for that.

I'm a co-founder of the Autopian, the site you're on RIGHT NOW! I'm here to talk to you about taillights until you cry and beg me to stop, which I absolutely will not. Sorry. Hug? Also, David's friend.
Read All My Posts »
PrevPreviousA Disneyland Ride Has An Easter Egg Few Gearheads Will Notice: Comment Of The Day
NextJewel Heist Getaway Vehicles: 2002 Ford Expedition vs 2006 Mazda MPVNext