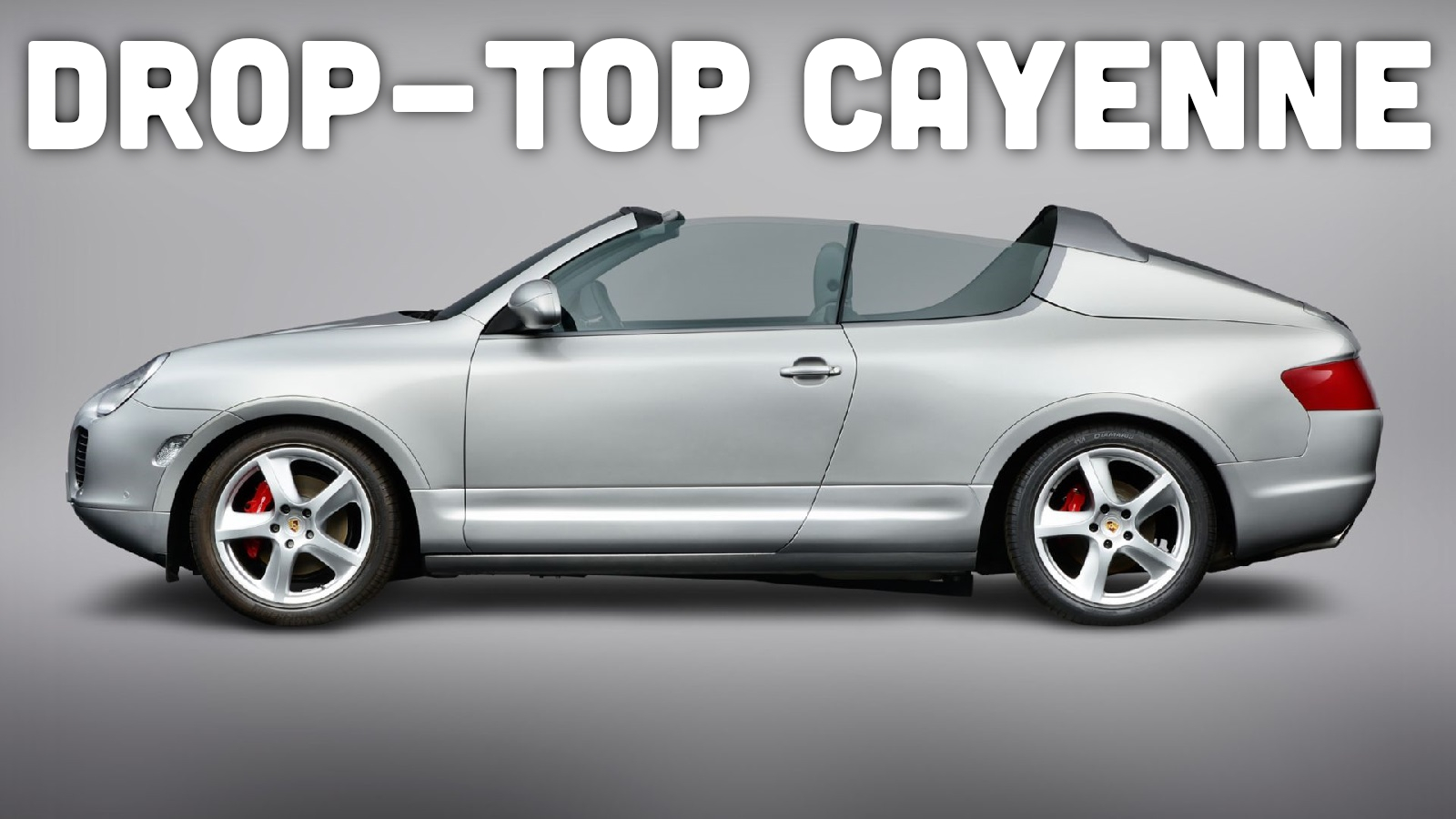 Porsche is celebrating 20 years of its Cayenne super SUV. When it released, fans couldn’t believe their eyes, calling the Porsche SUV blasphemy. But the Cayenne has been a sales success, and is part of the reason that the brand remains as strong financially as it is today. As part of the company’s celebration, Porsche is reminding us that early on, it considered making a bunch of different versions of the SUV, including a wild convertible.

In the early-1990s, Porsche faced slow sales and dwindling cash reserves. With a 240 million Deutschmark loss in 1992 alone, the company wasn’t in great shape. A later analysis concluded that the 911 and the then new Boxster did not have the staying power to keep the brand afloat. Porsche believed that in the long run, it would be trending downward again. It needed a vehicle to pump much needed cash into the brand to help secure its future. And to do that, Porsche looked to build a vehicle that wasn’t a sports car.

The brand considered five concepts, but in the end it was between a minivan and a sporty SUV. Yep, Porsche really considered having something like a minivan in its future! The sporty SUV was chosen, and at first the company looked to join forces with Mercedes-Benz to build it. Porsche envisioned its SUV being the high-performance version of the then-new Mercedes M-Class. The Mercedes-Porsche relationship didn’t last long, and Porsche began looking for a new partner.

It landed back with old friend Volkswagen. As Porsche notes, the companies were not a part of the same group yet, but they did have a long history of collaborations. Chairman Ferdinand Piëch saw potential in Porsche’s plans and decided Volkswagen could also use a vehicle like it.

Riding on a platform co-developed between the two brands, the Porsche Cayenne and Volkswagen Touareg showed themselves to the world in 2002. Both are best described as super SUVs — I’m talking about a 7,700-lb tow rating, short overhangs, loads of ground clearance, adjustable suspensions, low-range gearboxes, and plenty of German luxury.

The Porsche Cayenne is positioned as the higher-performance version of the pair, getting its own engines and an even more loaded interior. But the Touareg is no slouch, either. It’s a bit of an off-road sleeper, and for a period of time you could even get it with a 5.0-liter V10 turbodiesel engine.

In the same year as the Cayenne’s launch, Porsche was already thinking about how to expand the line, considering three different variants. One was a coupe, one was a lengthened three-row variant, and the last was a convertible. Of the three, Porsche was interested enough in the convertible to go forward with the idea.

Porsche built just one example, known as a Package Function Model. Designers started with a production Cayenne, then chopped off the roof and reshaped the rest of the body to fit their idea.

And if you’re eyeballing it and wondering, yep, it’s the same length as the donor Cayenne.

The company explains that a PFM isn’t a roadgoing prototype. The designers didn’t add the chassis stiffening needed for a convertible, so the open-top Cayenne can’t provide a safe or stable drive. Instead, it gets trailered wherever it needs to go. Porsche says that this was built to answer four questions:

Is the seating comfortable throughout the vehicle when the roof tapers in a more coupé-like way towards the rear and when the windscreen and A-pillars are shortened? How practical is the Cayenne as a two-door model with doors which are 20 cm longer? Is it possible to accommodate an elegant, high-quality soft top that can also be folded quickly? And how should the rear end be designed?

That question about the rear end design resulted in the PFM having two rear ends at the same time!

I like the one on the left; the taillights remind me of the Carrera GT, which is sort of hilarious on a SUV.

As for how the roof would have worked, Porsche says that it would have worked like a 911 Targa. The roof would slide over the rollbar and into the trunk, folding into a Z-pattern. Unfortunately, Porsche never got past the computer simulation stage with the one-off car. This Cayenne is a museum piece today, and if for whatever reason someone wants to put the roof on it has to be manually fitted.

Ultimately, the convertible idea was scrapped. But 17 years later, the coupe idea would get put into production as the four-door Cayenne Coupe. And that longer three-row Cayenne? Recent reports suggest that Porsche may be working on an electric three-row flagship SUV.

I love how Volkswagen Group brands are digging up old concepts this year. It was only last month when Volkswagen decided to reveal its one-off second-generation Phaeton. Porsche now has me thinking what could have happened if Porsche beat Nissan to putting a convertible SUV into production.

Mercedes is a lifelong fan of all things powered by an engine. When she isn't driving one of her five Smart Fortwos or her 14 other vehicles she could be found in the cockpit of a Cessna 172 or perhaps swimming in any body of water that she could find. She also has a deep love for buses of all kinds. Please send her buses. mercedes@theautopian.com Instagram: @mistymotors Twitter: @Miss_Mercedes30 Facebook.com/neonspinnazz
Read All My Posts »
PrevPreviousIIHS Changes Side Crash Test To Simulate Impact From Today’s Heavy SUVs. Watch Several Midsize Sedans Get Rocked
NextThe Porsche 914’s Pop-Up Headlights Had A Grisly SecretNext