All right; you guys have had it too easy recently. I’ve given you lots of “safe” choices that ran fine, even if a couple of them were Daewoos. Not today; today’s contestants both ran when they were parked, and both will lead you down the back-alleys of eBay on a quest for parts to get them going again. But both are worth the effort, at least in my opinion.

You’ll need a van to haul all those parts, so let’s see which one you chose yesterday:

Huh. I thought the Dodge would have the upper hand, but you wanna haul stuff in your Chevy van, and that’s all right with me.

Right then. Here’s a rear-engine French car and a German GM product. You’re welcome. Let’s see what you make of them. 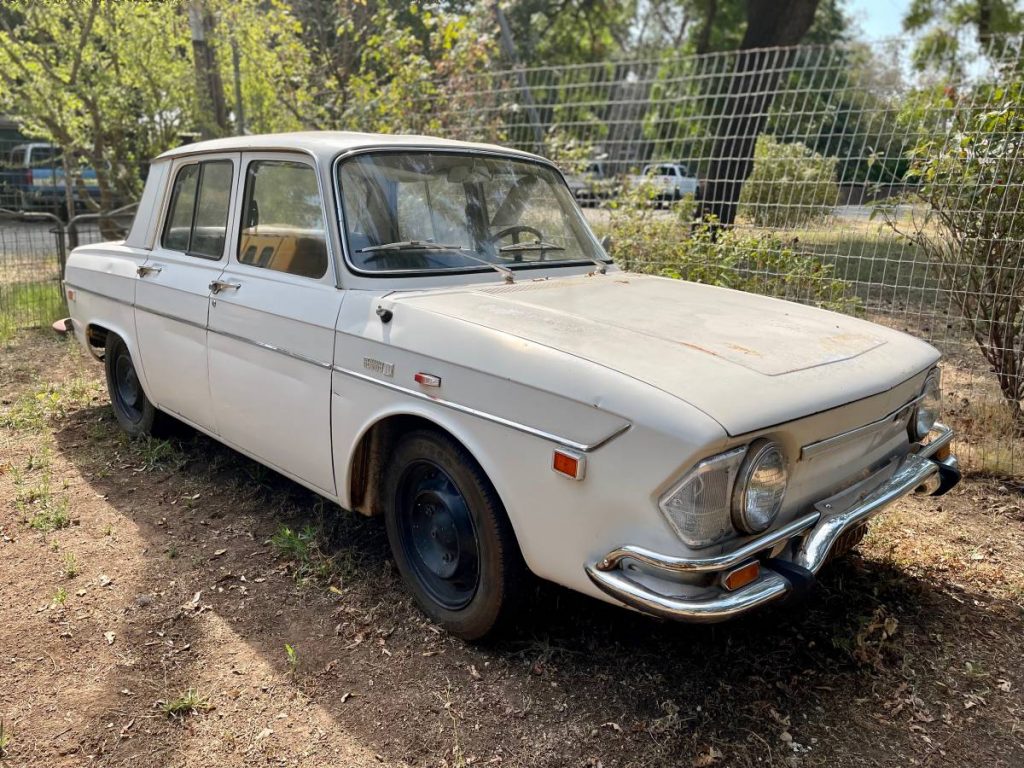 Runs/drives? No, but was drivable not too long ago

In the classic 1942 film Casablanca, the corrupt police captain who ultimately did the right thing, played so brilliantly by Claude Rains, was named Renault. They said his name about fifty times in the movie, and pronounced it correctly. But that didn’t stop Americans from calling this a “Ren-ALT.” Only the incomparable George C. Scott was able to finally drill the proper pronunciation into (some) American heads. 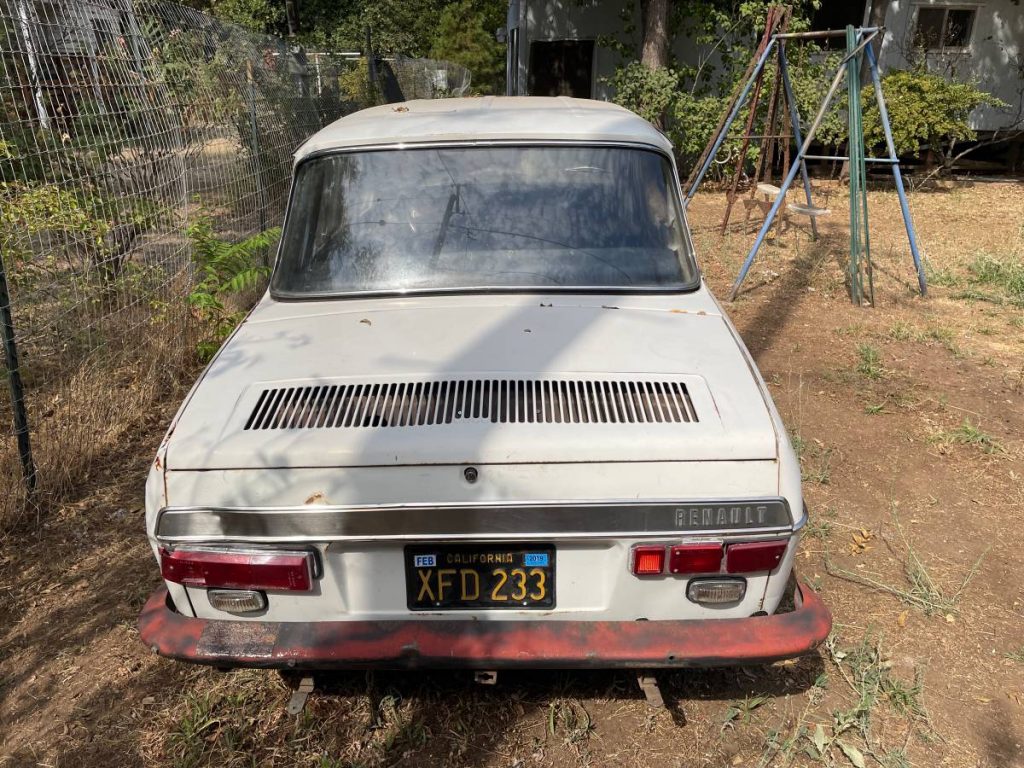 The Renault 10 was a development of the Renault 8, which was in turn based on the earlier Dauphine. Like those, the R10 uses a longitudinally rear-mounted pushrod four-cylinder, displacing 1108 cubic centimeters here. The 8 and 10 look almost identical, the only difference being a few inches of length in the nose, to increase the size of the frunk. It’s an ungainly shape, but somehow appealing. 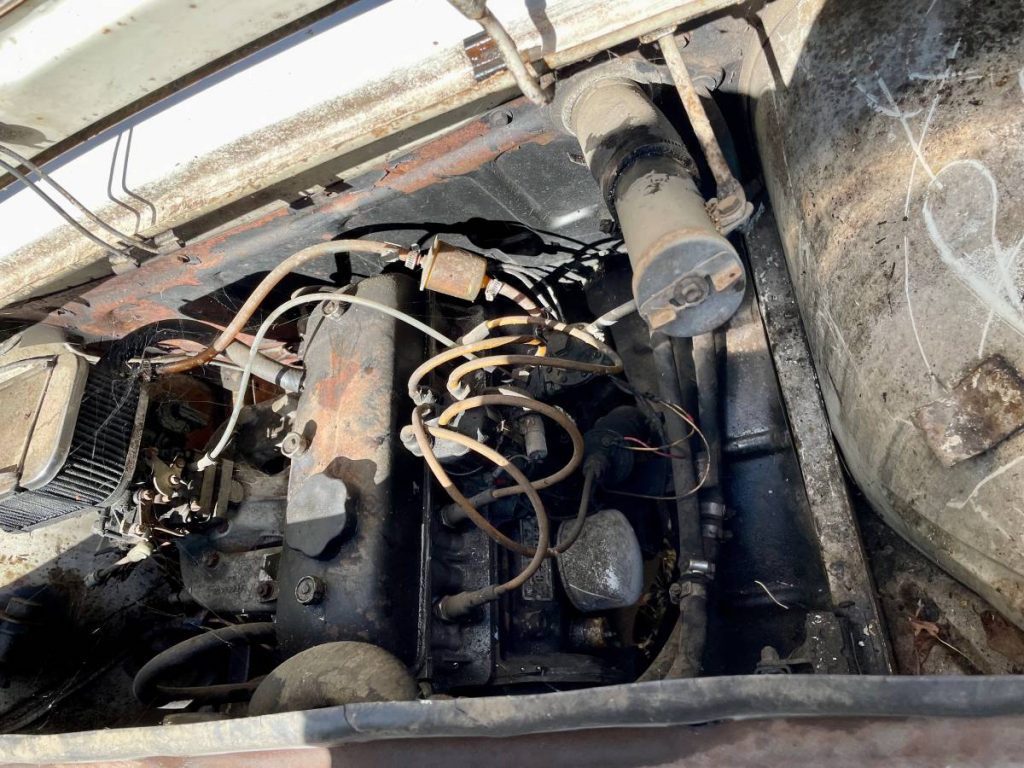 This 10 looks to be in fairly good shape, actually. It has a few dings and dents, but no rust to speak of. The car was on the road as recently as four years ago, but it sounds like it has been sitting since then, so a little work will be needed to bring it back to life. 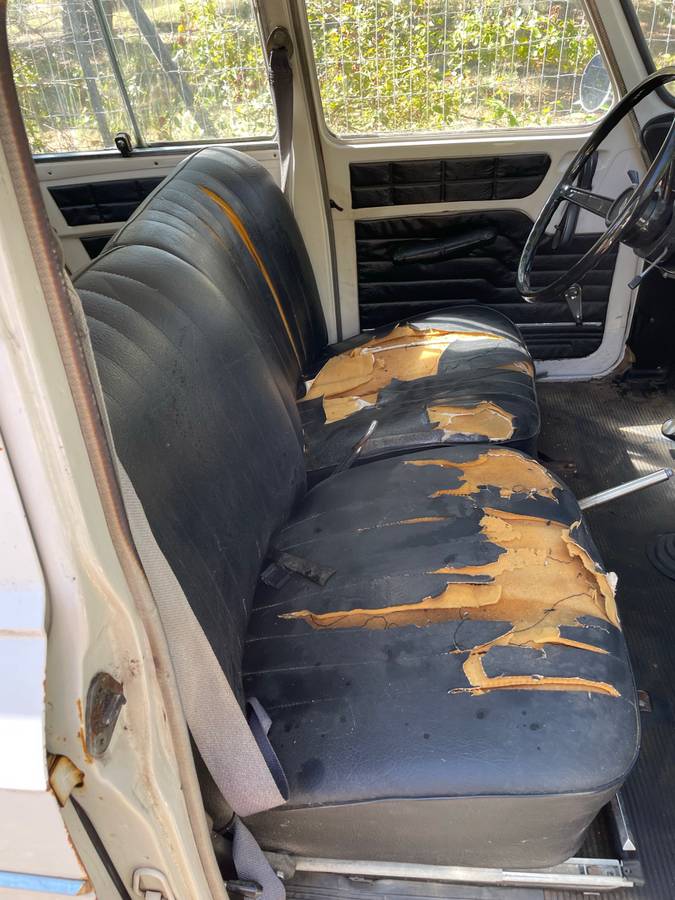 Inside it’s rougher, with both the seat upholstery and the headliner needing some attention. But any good upholstery shop should be able to help you out there. The main thing is that it’s complete, intact, and hasn’t been sitting too long. It would make someone a fun project, and make a nice Saturday cruiser that you won’t see another of any time soon. It could be the beginning of a beautiful friendship.

[Editor’s Note: I just want to add that back in the day, these things tended to get great reviews. I have at least one ’60s era magazine that rounds up all the imports, from Fiat to Volkswagen to Austin and more, and the R10 comes out on top. It’s roomy, has great seats, a huge trunk – I love these things, and think they’re under-appreciated. – JT] 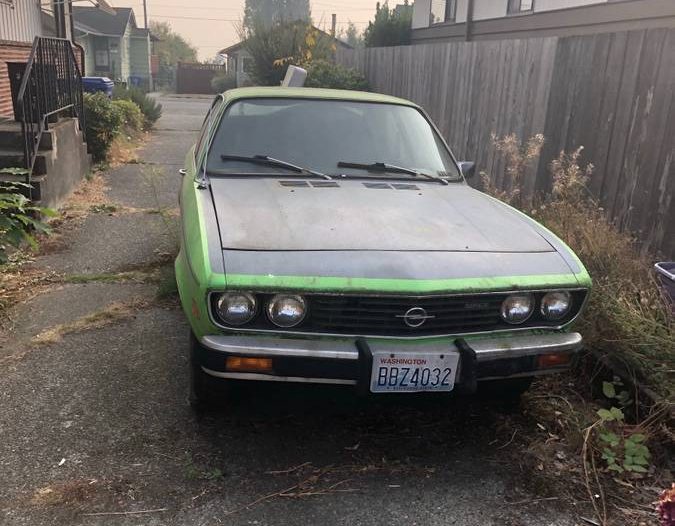 Runs/drives? Not quite, starter is dead

Fun fact: My parents had a red 1970 (I think) Opel Manta when I was born, so it was the first car I ever rode in. Whether this early experience informed my lifelong love for small manual coupes I can’t say. I don’t remember it, but I do vaguely remember the Pinto Squire wagon that replaced it. I know my dad remembers the Manta fondly, and it’s the car in which my mom learned to drive a stick. 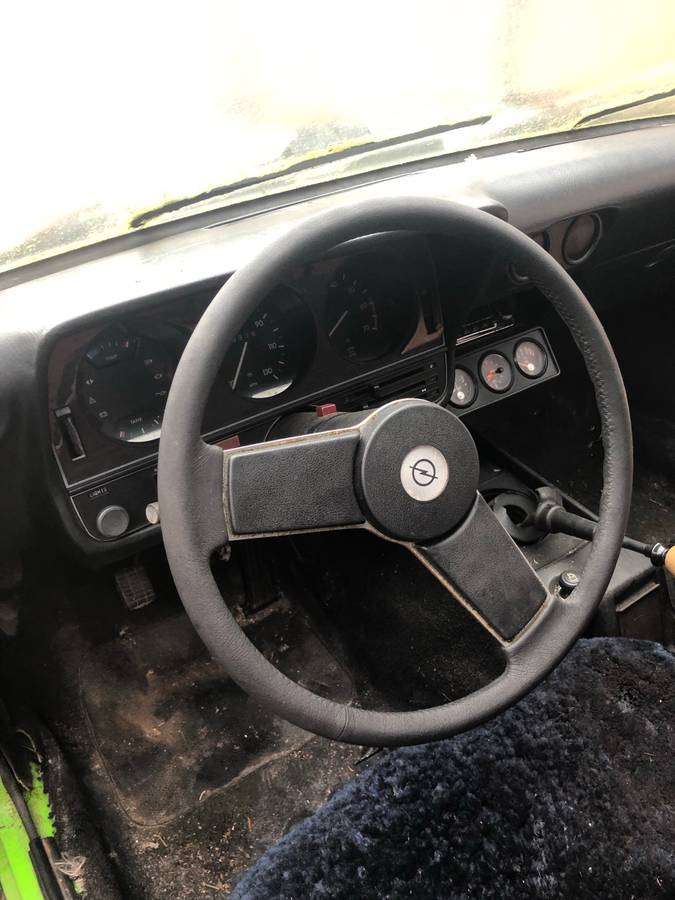 This Manta is a stick too, with a four-speed behind its 1.9 liter engine. It’s also a Rallye, which meant quicker steering and more aggressive suspension tuning in addition to the black hood and gauge package. It’s not any faster than a standard Manta, but it should carve up the corners a little more sharply. The apple-green paint and Rostyle steel wheels round out the package, and give it the consummate sporty ’70s coupe look. 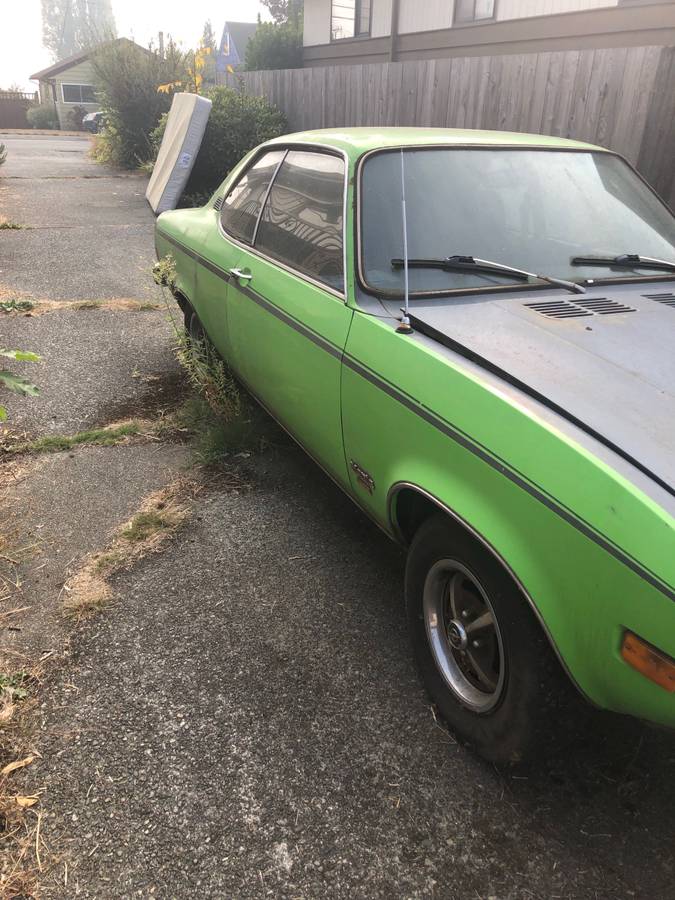 It’s in really decent shape, actually. It has some rust in the battery tray and firewall that needs some attention, due to battery electrolyte leakage, but the rest of the body is solid. And the interior is presentable, if not perfect. Mechanically it sounds OK as well, though it needs a starter, or an ignition switch. It was running as recently as last summer, though. 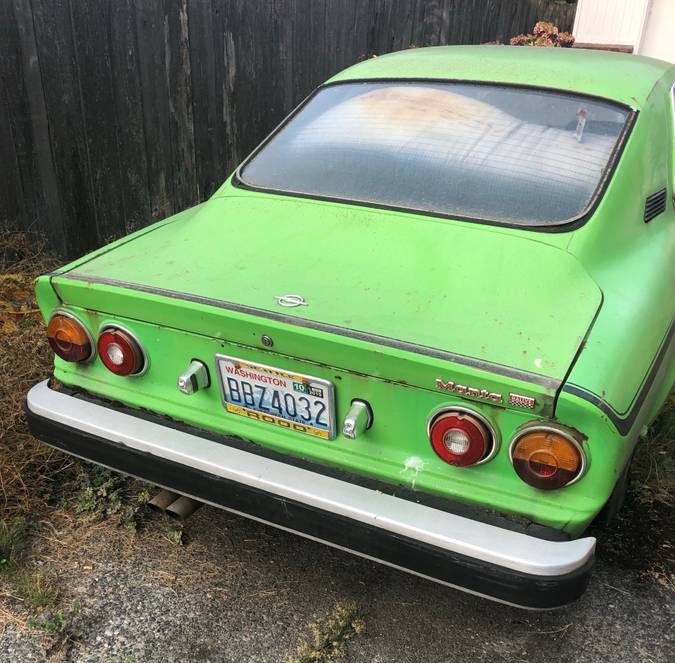 Everybody remembers the Opel GT, and they are starting to get their due as collector cars, but I always preferred the Manta. And this looks like a good example, and worth saving. I hope someone takes up the challenge and gives this little green monster a second chance.

[Editor’s Note: I love these taillights. They look both like the Harvey Balls used by Consumer Reports to show ratings and also seem like they’d be fantastic hard candies. – JT]

I know a lot of people would shy away from projects like these, due to the difficulty in finding parts. But – and I say this as an MGB owner – it does get old seeing the same ten classics get picked as projects again and again, just because they’re easy to get parts for. The Renaults and Opels of the world deserve a chance too, and I love it when I see someone taking one on. Which one would you be willing to tackle?