With David still wrenching away on Valiants down under, we’re still looking at highly enigmatic overseas versions of one of America’s most bread-and-butter sedans, the Plymouth Valiant. So we’ve found mild mannered Plymouth Valiants-in-disguise living in Spain, but these were not the only Chrysler A-Body expats to flee to Europe. Here’s another one: Valiant cop cars. In Sweden. 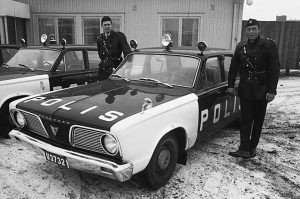 It’s strange enough to see Valiants existing in the Land of the Midnight Sun, and as police cruisers no less. However, it gets stranger; these cars were actually ASSEMBLED there, by SAAB! That’s right: the key-on-the-floor, freewheel-equipped, egg-shaped car maker building a meat-and-potatoes American car. For whatever reason, SAAB built CKD (completely knocked down) kits, which were primarily used as cop cars because, in the words of one source, they did not have a car equivalent to a Volvo Amazon or 144 to offer for such use.

Damn, they all showed up for the infamous Stockholm Syndrome robbery! 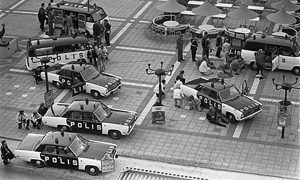 Inside, it gets stranger. When building later Valiants, it looks like SAAB installed their own door handles inside, put in a center console, and blessedly added their own donut-hole-headrest seats in place of the Plymouth’s standard fare, which, from my experience, were some of the worst seats that I have ever experienced in a motor vehicle. 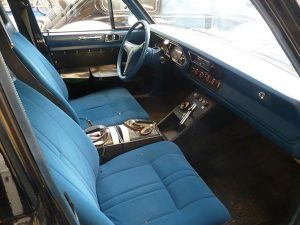 Out front, however, things get really bizarre: 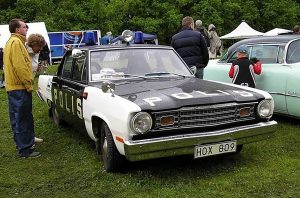 What’s with the front end? It looks like a person with their eyelids removed.  Apparently headlight wipers and washers became mandatory in Sweden, so to make the A-Body compliant they had to add them.  They dealt with the issue of the trim around the lights not clearing the wipers by simply shitcanning the bezels, resulting in this odd, unfinished, creepy look: 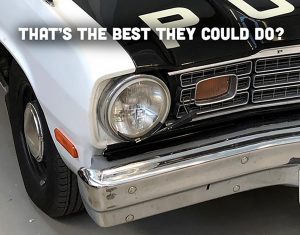 Come on, SAAB!  You gave us the push/pull broom headlight washer and you do THIS?

I knew that American cars were once popular in Scandinavia, but it’s hard to imagine SAAB executives negotiating for Leaning Tower Of Power-equipped sedans.

Still, it’s nice to see a few poor Valiants getting a chance to break free from their typical life of transporting eighty-year-olds to church at 30MPH. Flying over frost heaves while chasing guys stealing crates of lutefisk and krumkake, these Mopars dealt with abuse even sixteen-year old me couldn’t inflict on them (believe me, I TRIED to kill this thing) yet lived to tell the tale.