Crap crap crap. I’m trying to sell some of my cars off, but my right pointer finger can’t help but hover above my laptop’s “F” key. My body seemingly needs to visit Facebook Marketplace; the problem with this habit is that it tempts me with incredible, dirt-cheap cars — and you know what? Incredible + dirt cheap is a duo that kicks my ass every time. In an attempt to keep that boot-print from my arsecheek, I’ve decided that, instead of buying these cars I recently found for sale, I’m going to write about them so that one of you poor, poor bastards can snipe them from under me. Seriously, I need you to do this for me.

I realize that we here at The Autopian are a bit heavy on “cars found for sale” content, but there’s just so much good stuff that found its way to my computer screen lately, and I’d be a fool not to share it all with you. I figure, if I’m gonna bother all my friends and coworkers with this stuff, I may as well bother you all, too. We’re friends, right?

Honestly, if enough of you sign up to be Autopian members, stupid ideas like these could become a more-frequent-than-ever reality (they will happen anyway, let’s be honest), and though that’s bad for my social life, it has the potential to be good reading. Anyway, let’s start with the big one: A FREAKING RENAULT FUEGO: 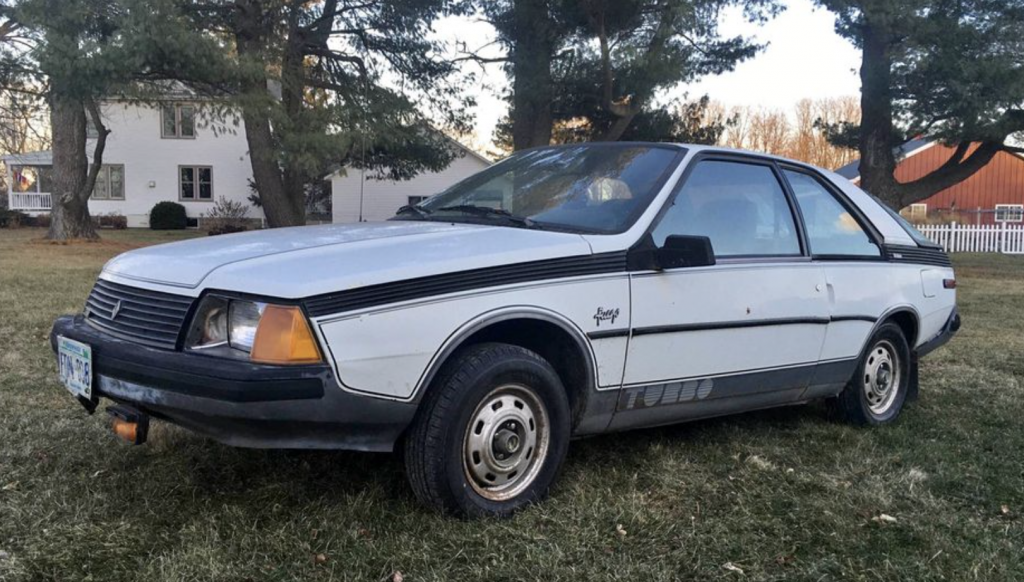 It’s a Fuego Turbo, not just a lowly naturally aspired model. This little French-engineered car came to the U.S. after the Renault/AMC alliance of 1979 — an alliance that ultimately failed, in part because of cars like this.

The Fuego, outfitted with a boosted 1.6-liter four cylinder and a five-speed manual was apparently a decent car when new, but, like many Renaults, grew a reputation for less-than-optimal reliability. Here’s American Motors’ last CEO, Joe Cappy, talking about the “No-Go Fuego,” courtesy of the Oklahoma Historical Society’s interview:

And the year before the Renault Alliance, we brought in an export called the “Renault Fuego,” which was a cute car — a 2-plus-2, had a turbo engine, sold for 8500 without it maybe 10,000 with it — is was a really a kind of car that you’d like to have. The only problem is that is had a terrible quality problem. And the quality problem — it would stop. There was some kind of an electrical malfunction and, if you were lucky, you got it to the side of the road. This was happening — you know, our dealers were so excited; they were selling them like crazy. And we were increasing the number we were going to import, but then, everything stopped. We didn’t have the internet, but word got out, and nobody would step up and buy the car. Well, my boss couldn’t understand why we couldn’t sell this attractive, sporty, well-powered, great value vehicle. And he was getting pressure from Paris: “Why are you not moving these and why don’t you want to take more product?”

Correct. The Renault Fuego. And, finally, my sales manager piped up and said, “José, you’re right. This vehicle has all those attributes. It is one of the finest, best-looking products — sitting on the side of the road, all over the United States. Our dealers now call it ‘The No-Go Fuego.’” (Chuckles)

Yikes. I still want it, though. 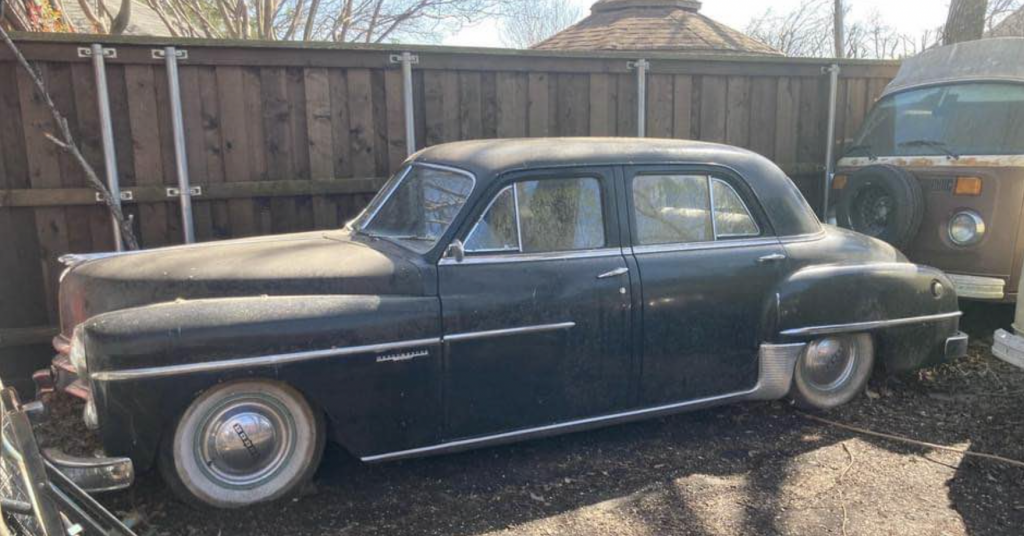 Woh this thing is clean. A Texas vehicle, this old Dodge features a solid body, decent black paint, and a classy interior!: 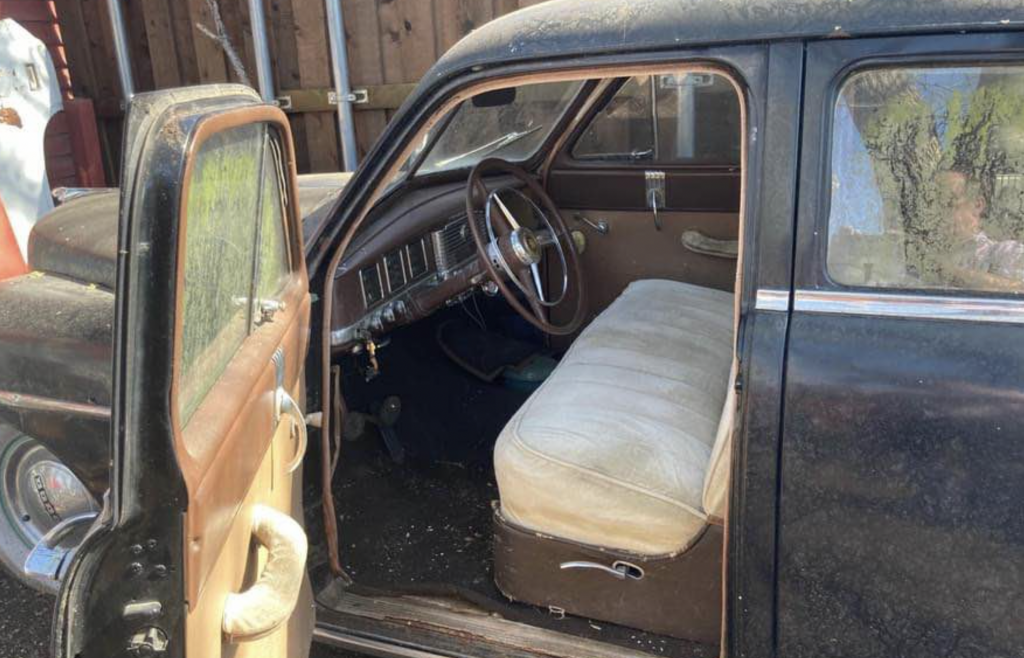 This dash is nice!: 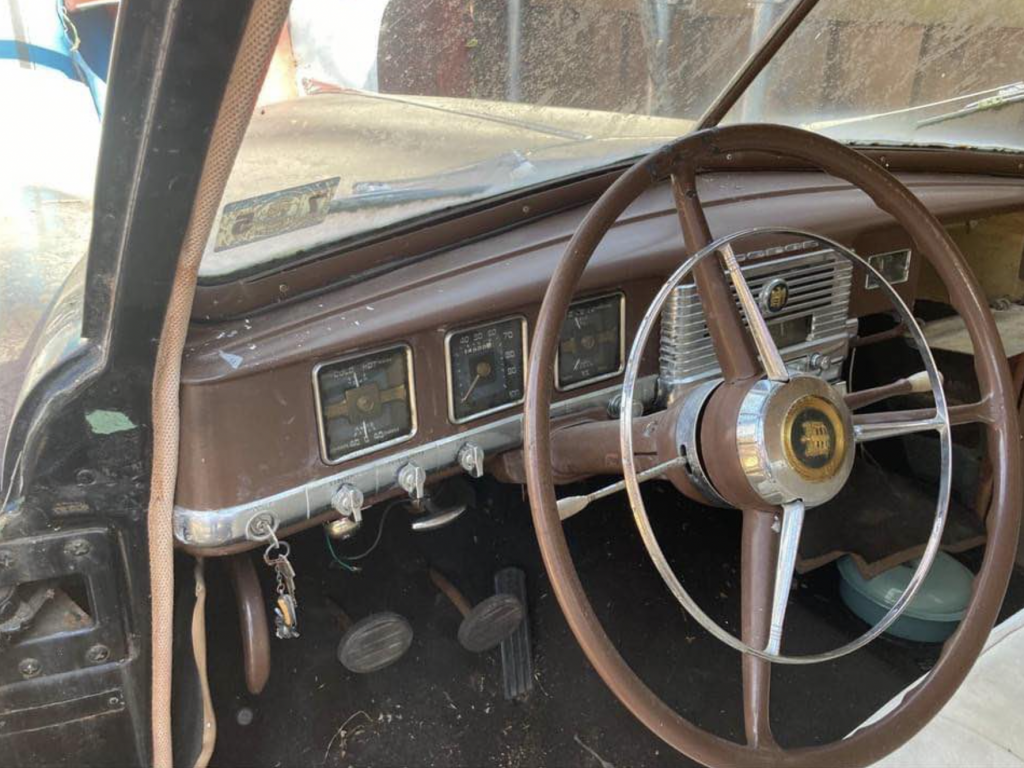 Though the body and interior are pretty, it’s unclear how bad the engine issues are, as the seller says the vehicle has a “head gasket problem or maybe worse.” Yikes. We talkin’ a cracked block? Rusted-out cylinders? Who knows. How hard would it be to find a replacement 3.8-liter L-head (flathead) motor? I’m unsure. Here’s the seller’s full description:

1950 Dodge Meadowbrook, flat head 6 and standard trans, body is very good, no rust, interior is fair. It is not running, has head gasket problem or maybe worse. I bought it to fix but haven’t had time, has clean title, can be seen in Lucas Tx 75002. 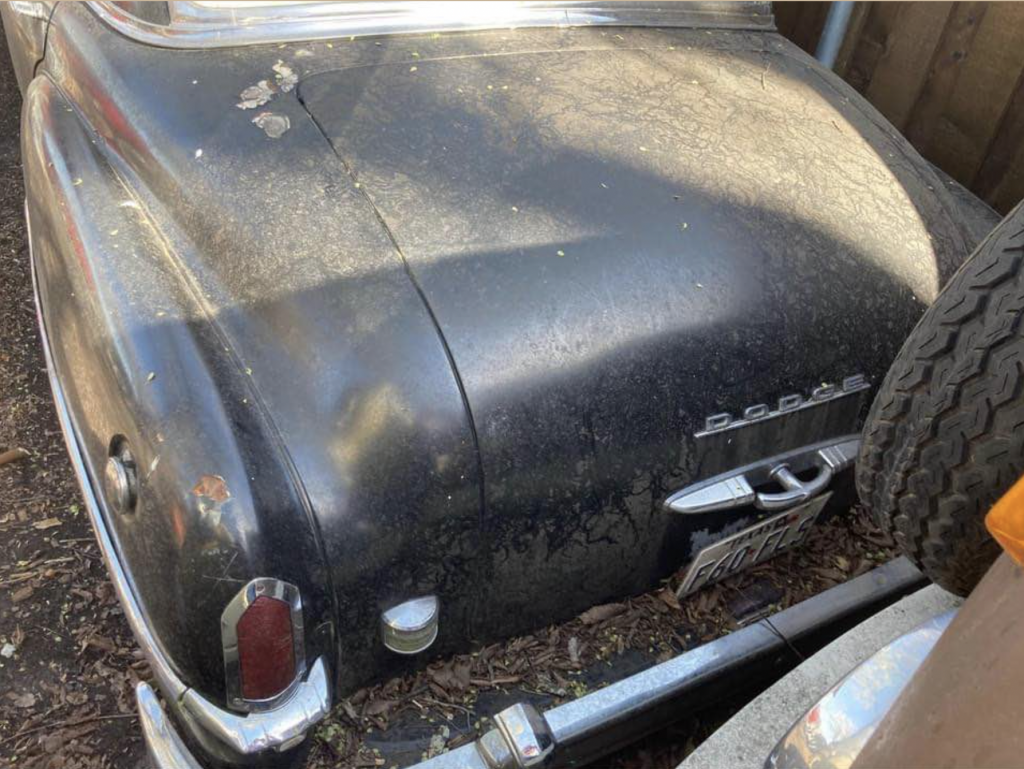 I think that’s a hell of a deal regardless of engine troubles, but that’s coming from someone with Michigan-Mind. 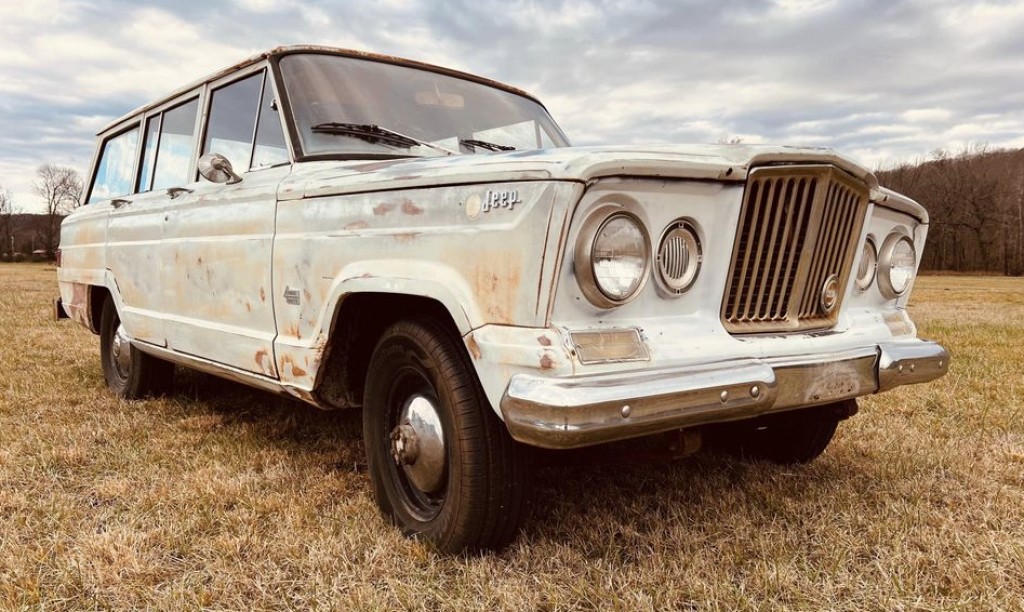 I realize it’s hardly cheap at $7,200, but it’s an early Wagoneer with a Rhino grille! It’s pure class. Here’s the seller’s description:

1965 Jeep Wagoneer 327-V8 Vigilante, 3-speed on the column,power steering, AC. Back window works as it should. I bought the car a couple of years ago from the original owners and was told the mileage is actual (53535.0). Has the original washer bag under hood, all lights work including the dome light as well as the horn and wipers. All the glass is good. New/Replaced: Tires Brake Master Cylinder Carburetor with electric choke Plugs Plug Wires Electric Fuel Pump Alternator I have most of the original parts that were replaced. The body only has surface rust. I have no seen any rust trough on the body but the floors do need to be replaced. I covered with license plates, I like it so I was going to leave it that way. Let know if you have any questions. I have a clear title in my name

Under 54,000 miles? Three-speed on the column? V8? Come on — just look at that three-piece front bumper, those dogdishes on the inside and headlights on the outside, and that tall and narrow grille. It’s almost perfect, despite needing a new rear bumper: 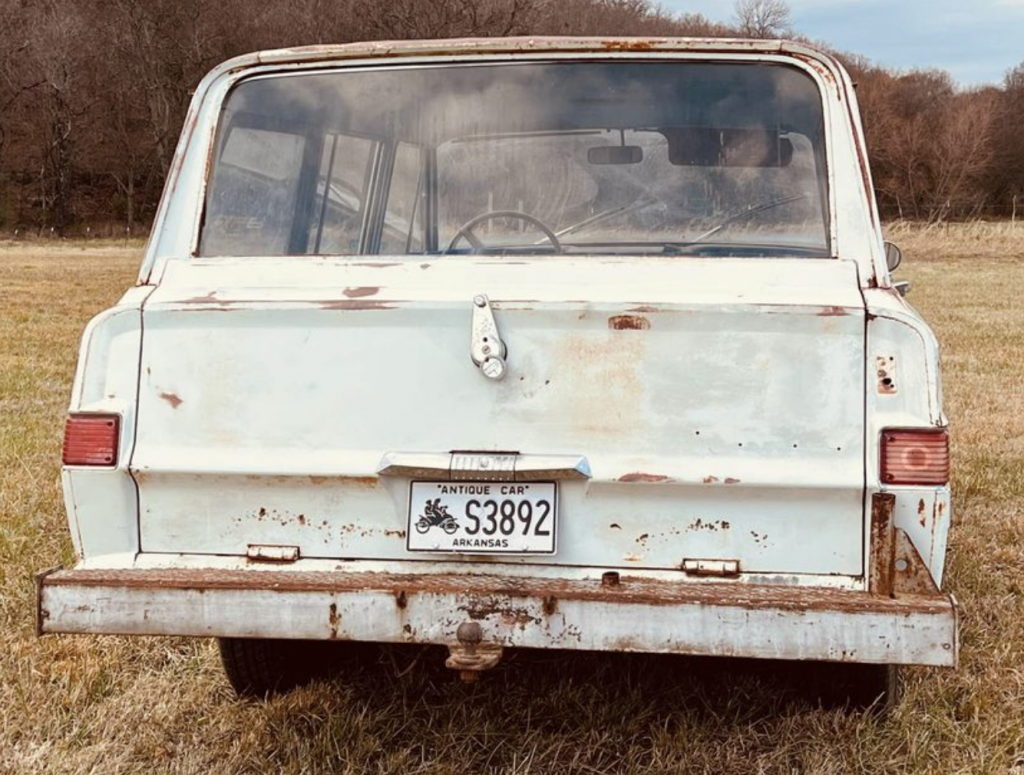 It’s not clear how well it runs and drives, but the way the listing is written, it seems like it does? All I know is: I want it. 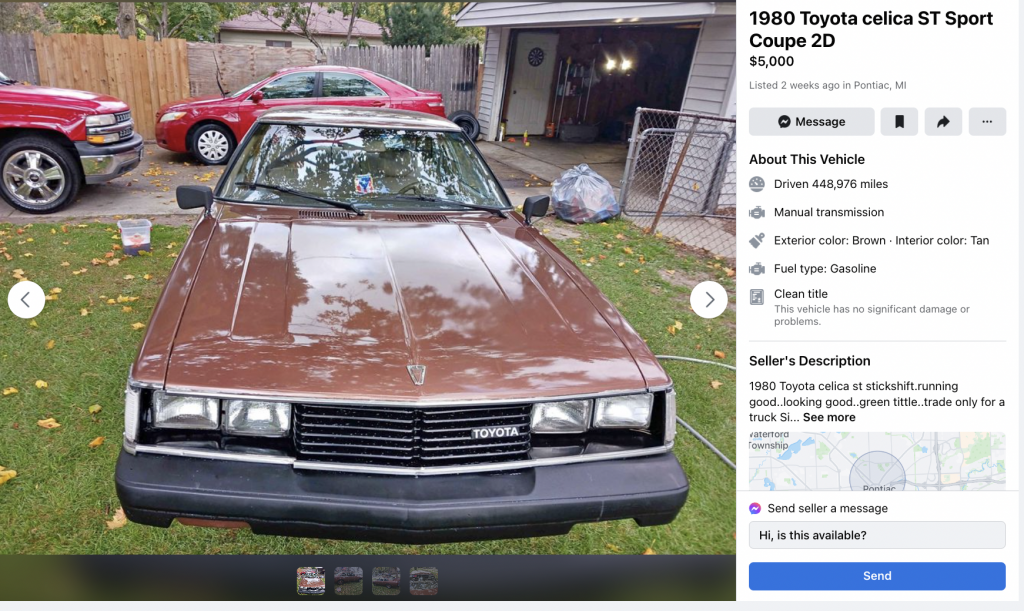 I know some of you will see the 448,976 alleged miles on the odometer as a bit of a bummer, especially when attached to that $5,000 price tag, but look at how nice the brown paint looks in these pictures! Five grand for a stickshift Celica? 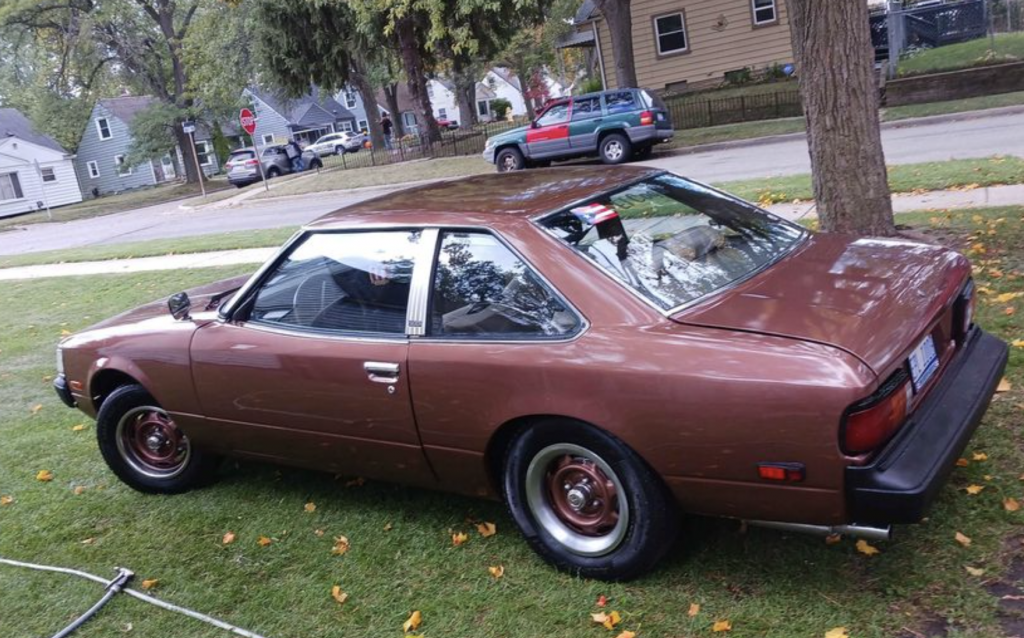 And look at the wheels; this thing is brown-on-brown! And we all know the classic car-buying advice passed down from the car-gods:  “If the car is brown, don’t turn it down.”

(Unrelated: Look at the Forest Green Jeep ZJ in the background with a Flame Red door. Nice). 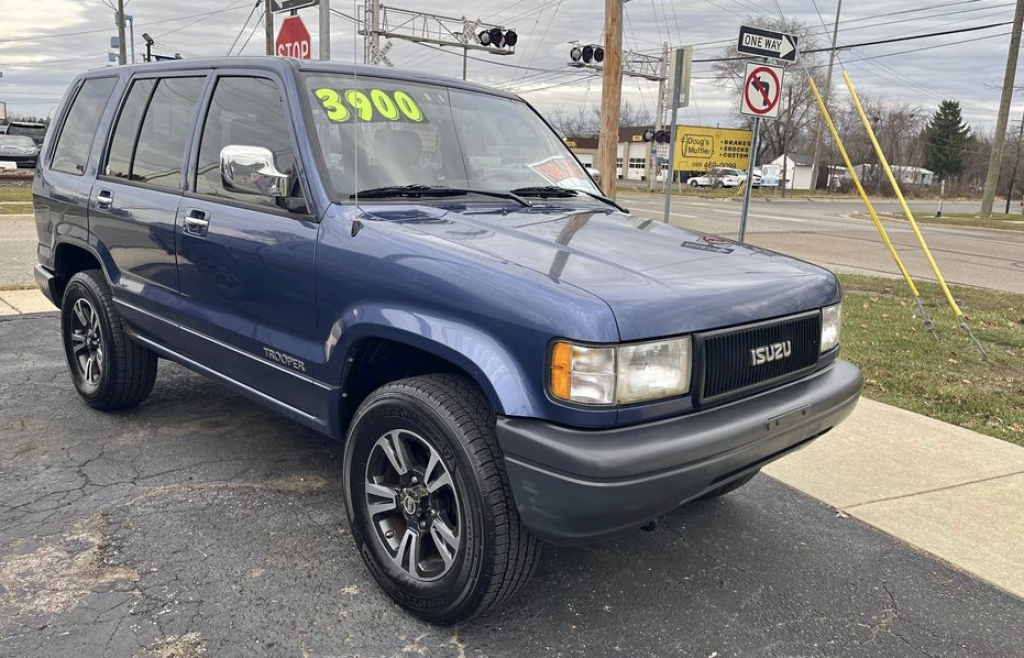 You can’t tell me you haven’t always liked these things. I do prefer the boxier first-gens, but it was the early 90s when the second-gen Trooper came out, and everyone was ditching sealed-beam headlights, installing plastic bumper covers, rounding hoods and fenders, raking back windshields, and adding tumblehome. Honestly, that jump from the mid 80s to the mid 80s was massive, styling wise, and really set a lot of trends that continue to this day. 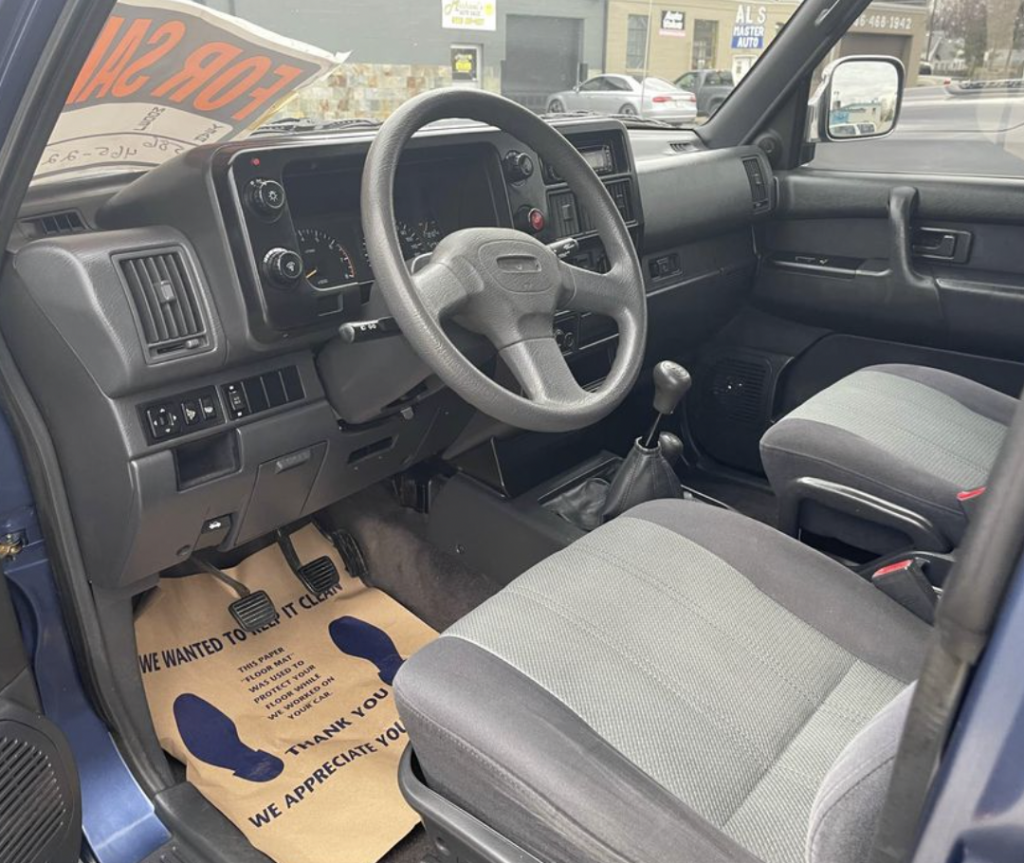 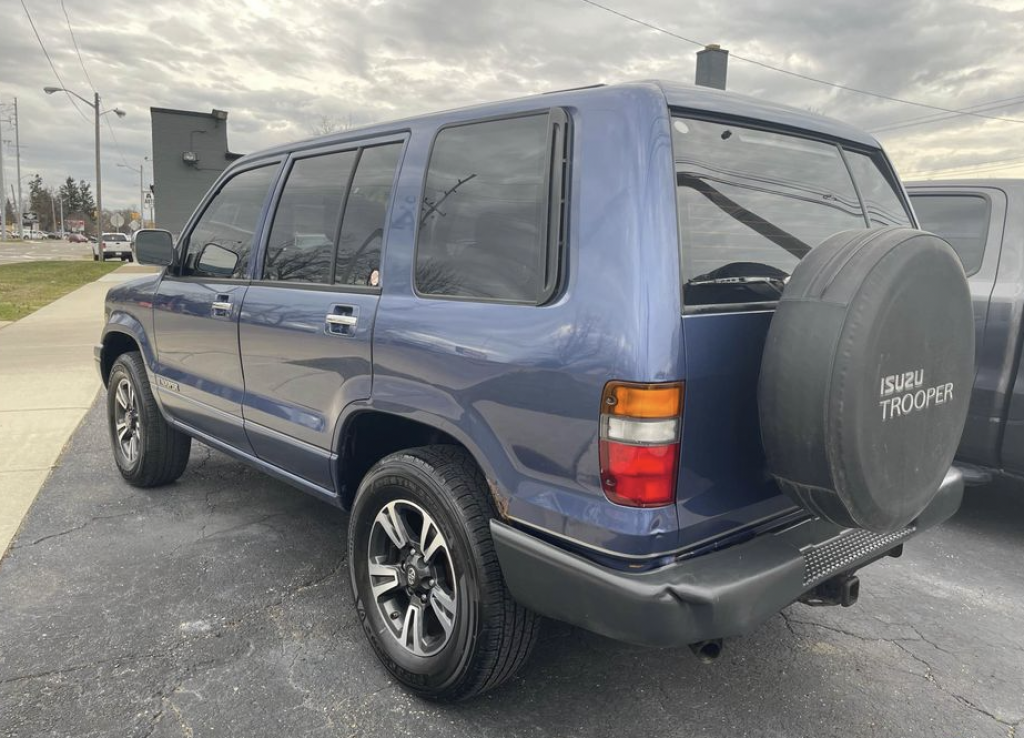 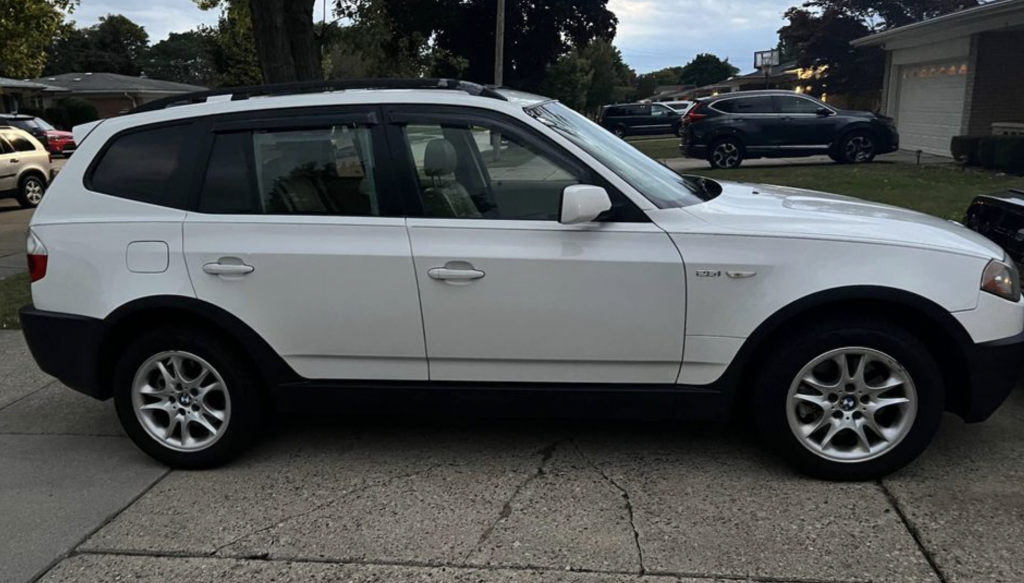 I’ve always loved the idea of a manual transmission luxury car; why do I have to suck up cloth seats and no options just because I want to row my own gears? It’s unfair, really. And though the X3 — especially this X3 — is far from an S-Class Mercedes, its cabin ain’t bad. Check it out: 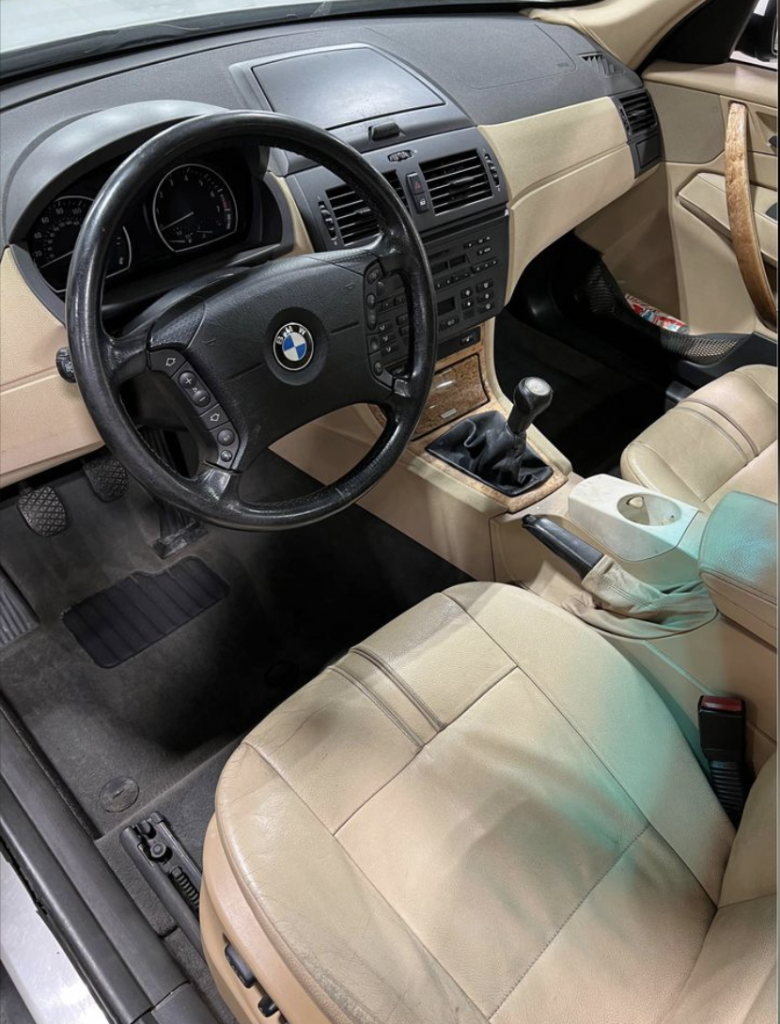 Our BMW expert, Thomas Hundal just told me “M54B25, manual gearbox, relatively low spec. It doesn’t seem like a terrible idea,” before warning me that I’d need to do a cooling system refresh, just in case. The 185,000 miles on the clock aren’t nothing, but if I could snag this rare 2.5-liter machine for $4,500 I’d have a car in my fleet that was almost respectable. 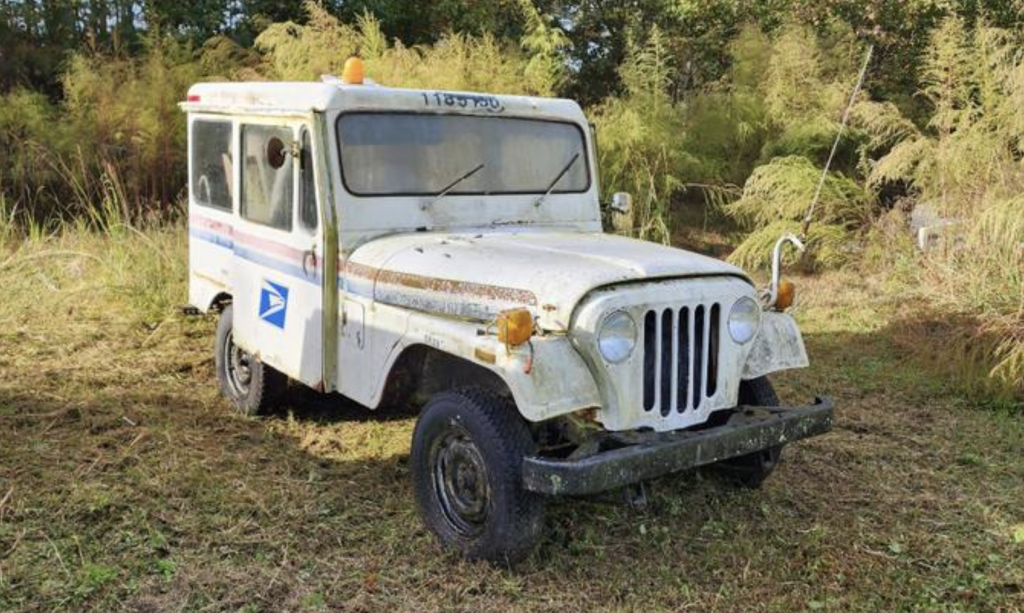 I have to admit that I’ve missed my old DJ-5 Dispatcher since the day I sold it in 2020, shortly before it was apparently crashed and then sent to be crushed at a junkyard. It’s honest and simple; it does a great job of carrying lots of stuff while remaining small and nimble; its AMC inline-six, Chrysler 727 transmission, and Dana 44 rear axle were stout; its ride quality was better than you’d think; and above all, it was just so damn charming. I mean, just look at that little guy for sale up there for $1,000. I need that!

And what’s great is that it comes with a second postal Jeep absolutely free!: 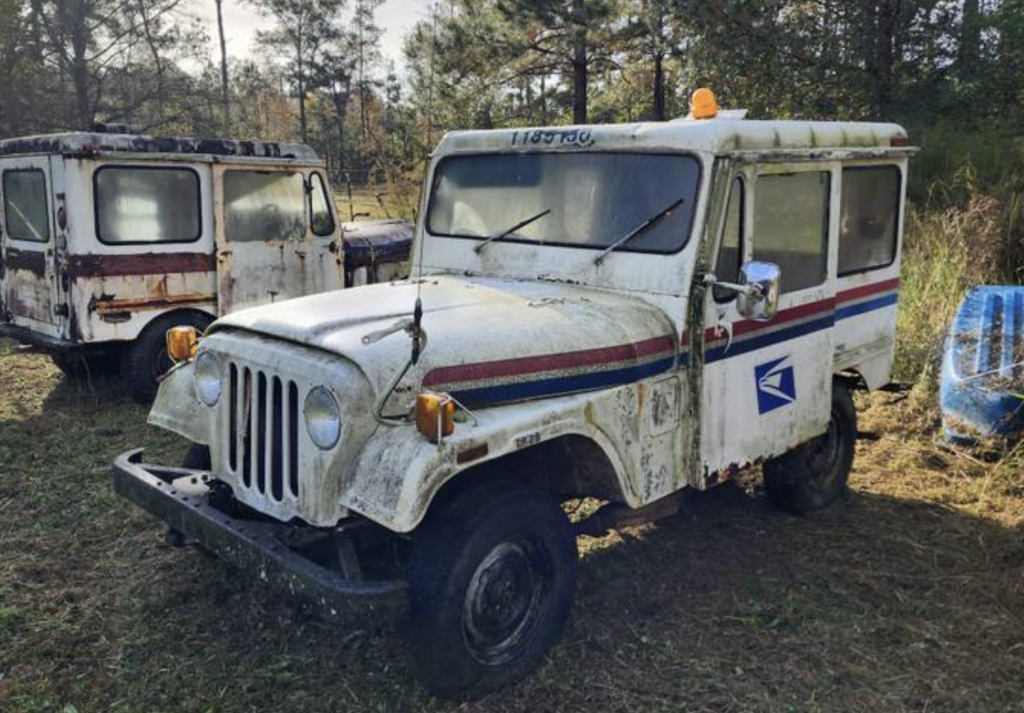 The charm-per-dollar ratio is off the charts.