I’ve never made a secret of my lifelong affection for the humble Volkswagen Beetle. I bought my first one at 15, before I could even drive, and they’ve been a part of my life since. I’m not under any illusions about them, though; they have perhaps the most troubling origin story of any mass-produced car, especially for a foreskinless fella such as myself, and even by 1980s standards they feel pretty agricultural. And even if love is blind, it’s not completely stupid, which is why I need to call out what I always thought was one of the worst design choices of most pre-1968 Volkswagens. This is important, people. And timely. 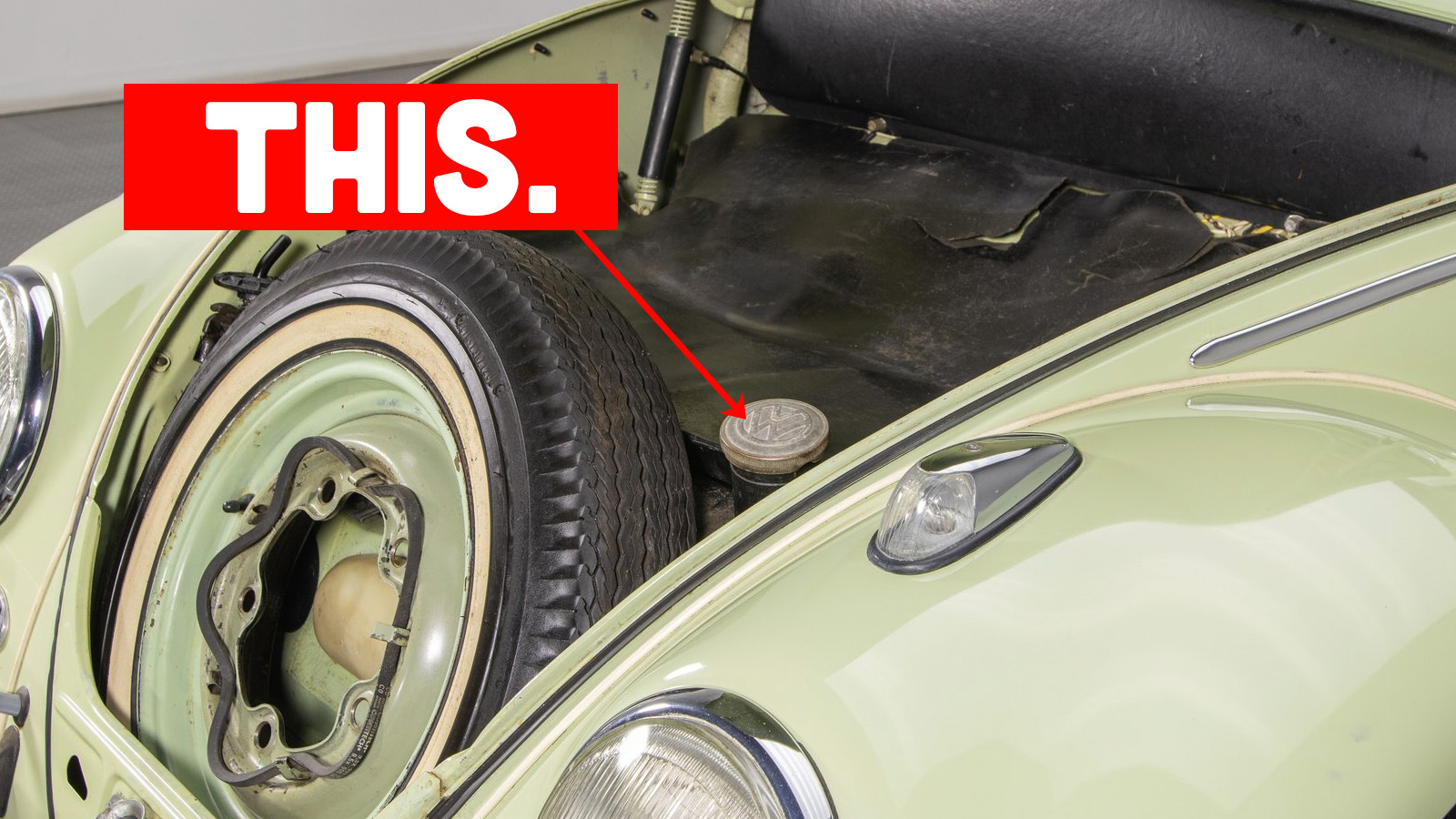 See that? It’s the fuel filler. And it’s right there, in the trunk.

Beetles had the in-trunk fuel filler since the car was designed in 1938 until its first major and comprehensive update in 1968. Other VWs like the Karmann-Ghia and Type 3s did it as well, as you can see here: 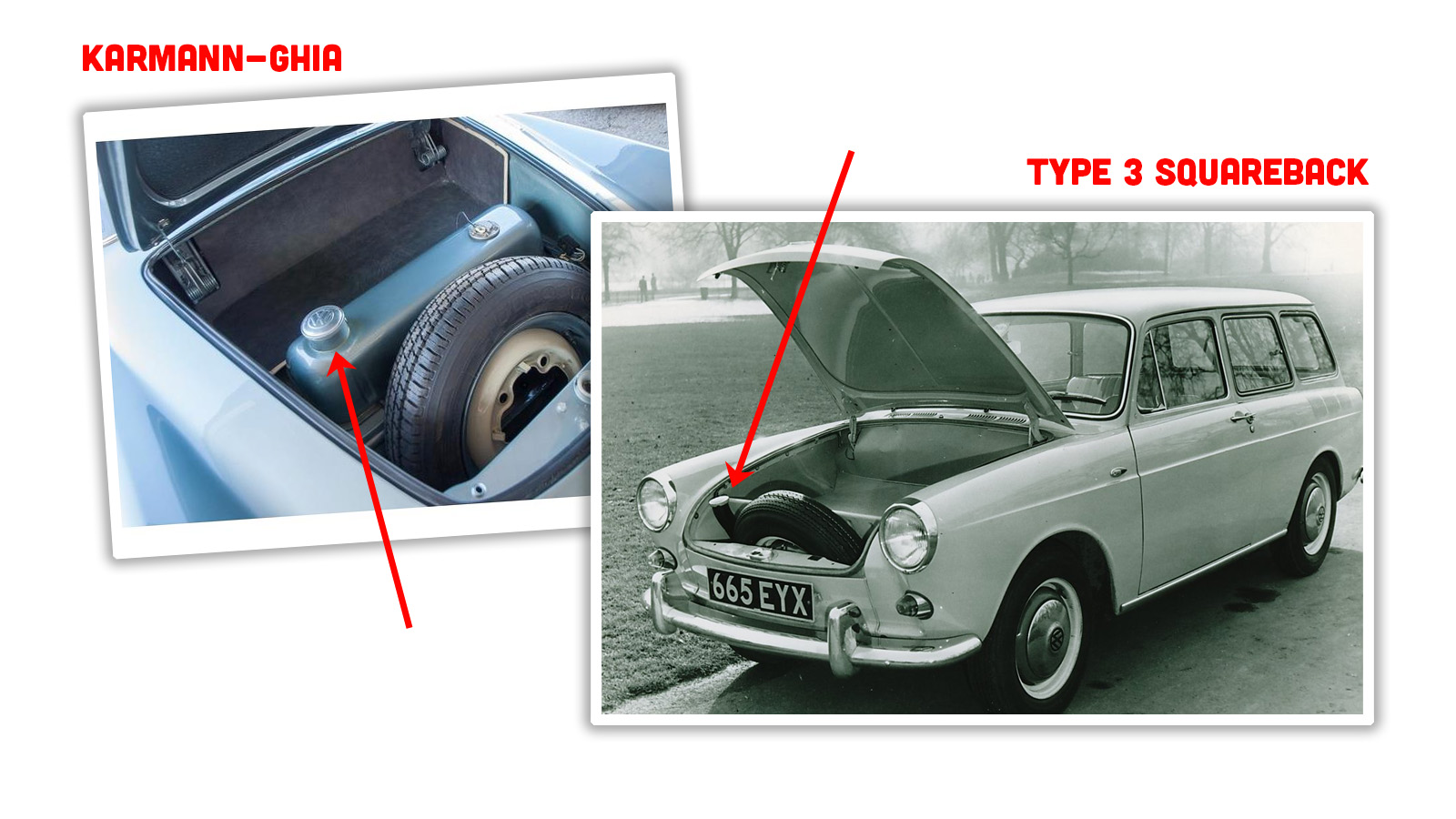 …and, here are a few other cars that used this method, like the Fiats 500 and 600, the DeLorean, and the legendary Mercedes 300SL Gullwing, though that one may be more a result of its racing heritage (a lot of ’50s and ’60s race cars had a fuel filler located in the trunk, directly on the tank). Porsche 356s have an in-trunk fuel filler, too, because of the Beetle-derived origins of the car, and those finally got an external flap with the 356C in 1964. I’m sure there are more out there, but these are some of the more common ones. 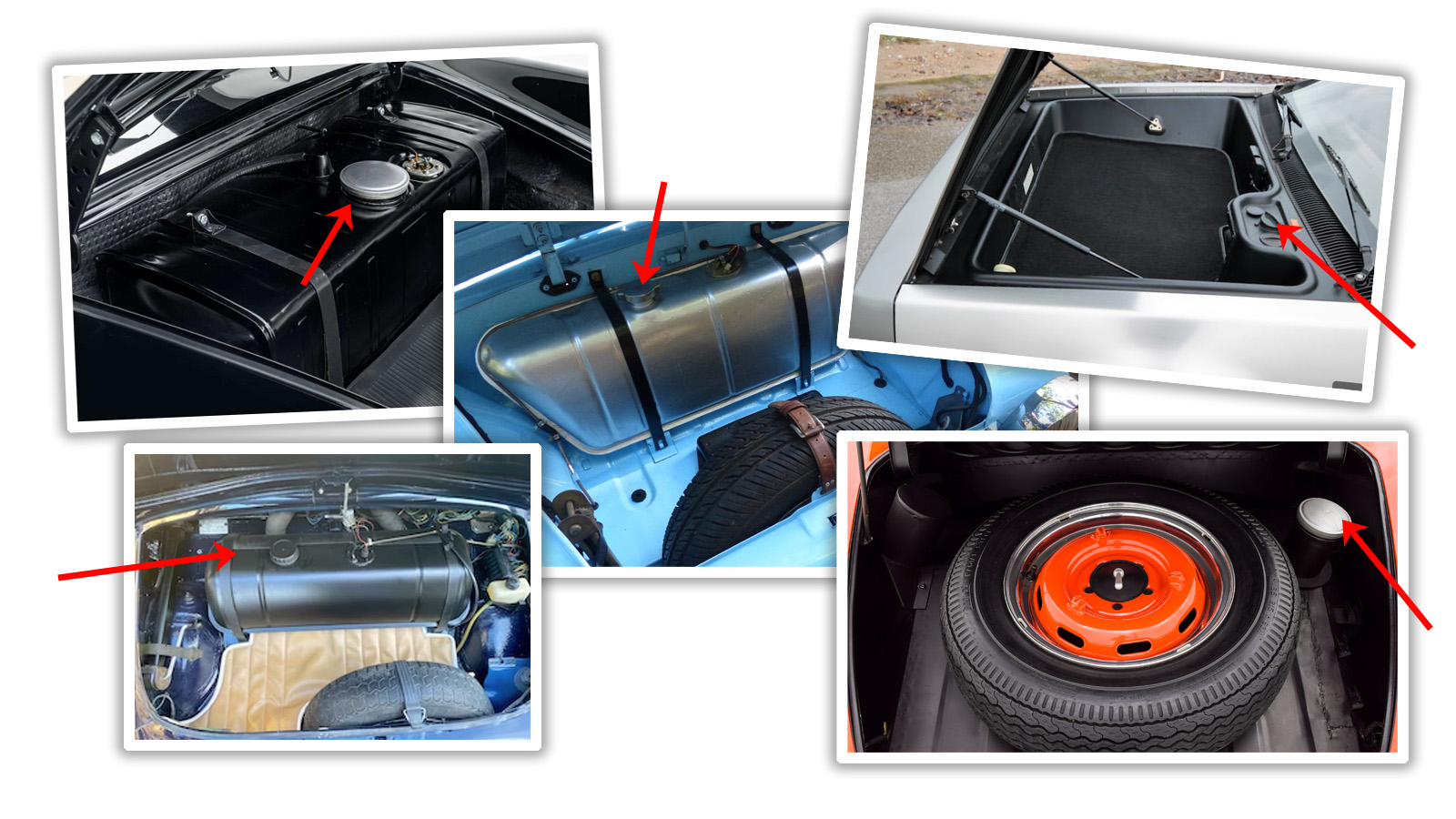 So, here’s my problem with the in-trunk fuel filler, in case it isn’t completely obvious: it’s way too easy to spill gasoline all over the stuff in your trunk. Plus, in case you’re like my dad and have no sense of smell (that’s actually true, and it’s why he couldn’t be a chemist like he wanted. Though he occasionally did stink) I should inform you that gasoline does smell. Strongly. I’ve carried a slightly leaky gas can in the trunk of my car and the resulting gasoline smell was powerful and lingered for what seemed like weeks.

If you’re on a road trip, let’s say, with your VW’s trunk packed full of your duffel bags, and you stop for gas and accidentally drip some gas onto your luggage as you’re lifting the nozzle out, then you’re going to smell like gas for your entire weekend at the lakehouse. This scenario must have happened countless times over the 1950s and 1960s, right? How could it not?

I just don’t get it. At first, I thought this had to be for cost-cutting reasons, since Beetles were, you know, very cheap, but that doesn’t explain why VW continued to use this method on their more up-market Type 3s or Karmann-Ghias? And, if the cost of routing the fuel filler to the outside of the car was really so prohibitive, then how come other very inexpensive cars like the Citroën 2CV and BMC Mini and Renault 4 and old Crosleys and so many others managed to pull it off? 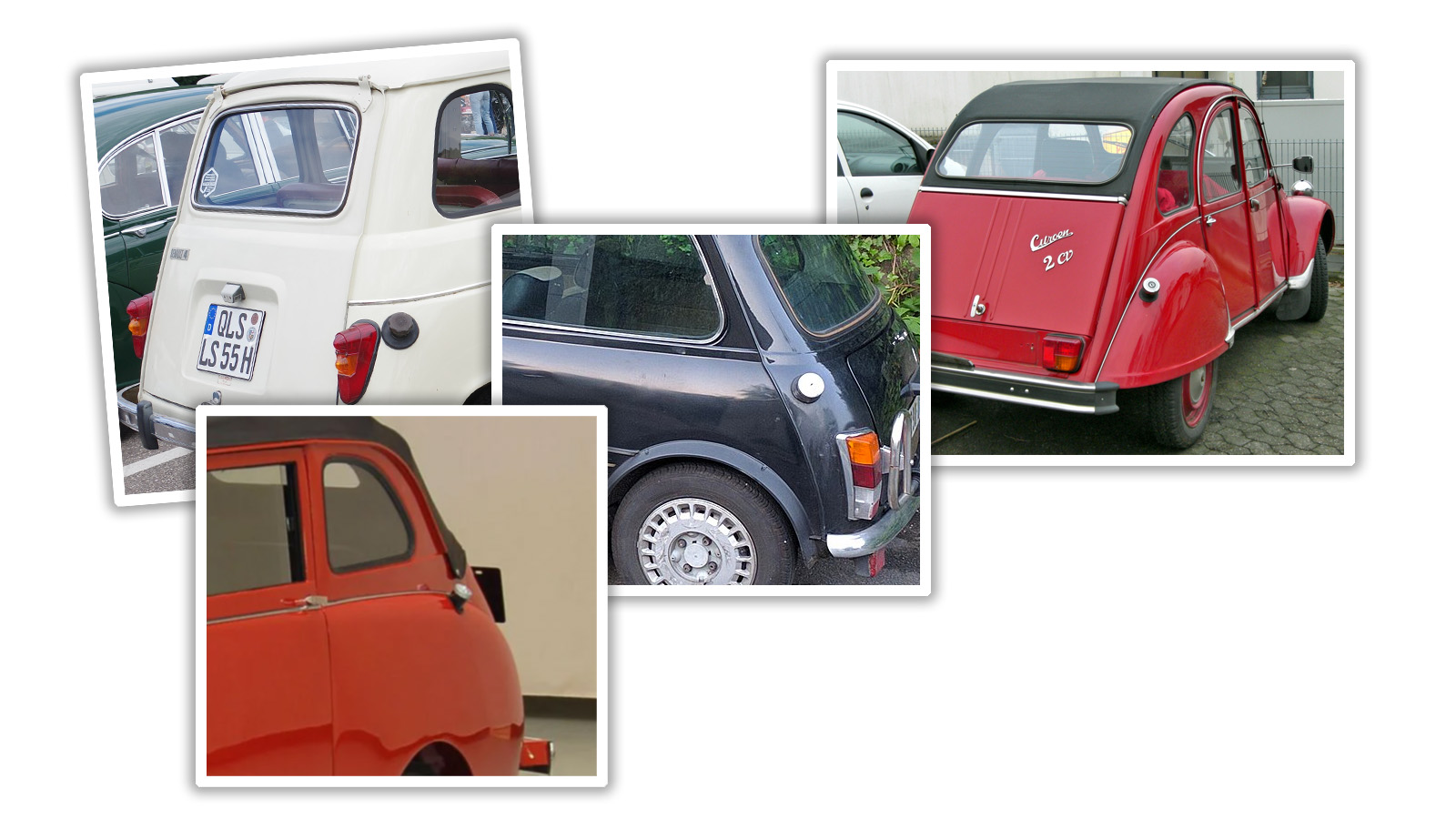 This is one of those design decisions that, in hindsight, is absolutely baffling to me. Why was this considered okay? The potential for a minor mistake to become a colossal, whole-trip-ruining fuckup is just far, far, too great. Remember, these cars were sold in an era before automatic-shutoff gas pumps, so think how easy it would be to put the pump in, set the hold open latch (those have been in use since 1957, letting a gas station attendant clean your windows or whatever while your car gets filled up) and walk away, only to come back a few moments late and the pump is ejaculating gasoline all over everything in your trunk. This had to have happened many times.

On most cars, the worst that would happen is that you’d spill gasoline down the side of your car, which you’d wipe off with the windshield squeegee between the pumps, and then you’d dry off. But in a trunk-filler car like an old Beetle or 356 or Fiat 600, if you had any luggage in there, you and whoever else was in the car with you would be royally, flammably fucked.

It’s just so unforgiving. It’s like an error magnifier, where it can take a minor mistake and elevate it to the level of disaster. Who wants that? 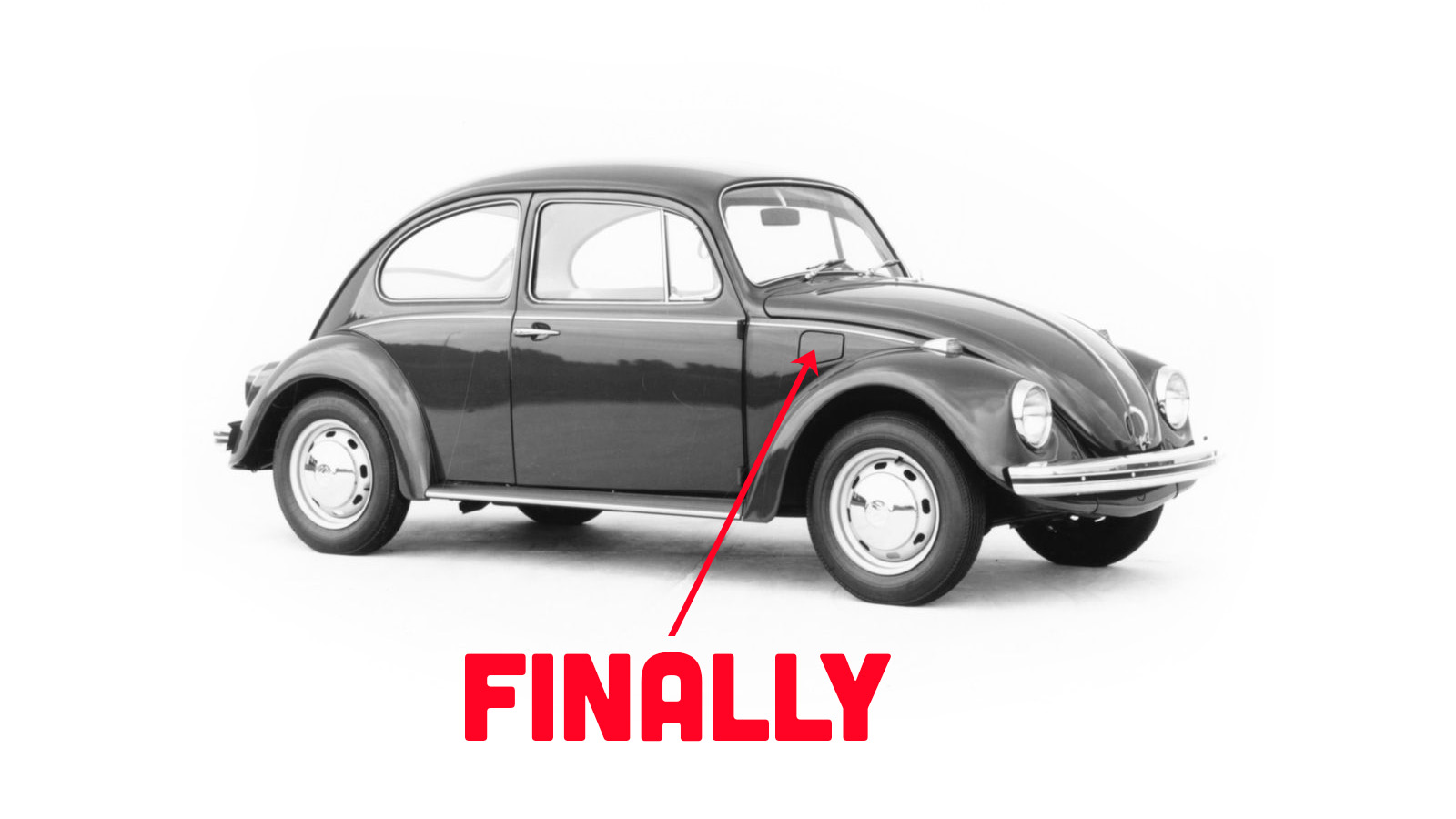 Anyway, VW finally took care of the problem in 1968. But I still have to ask why the hell it took them 30 years to solve this very obvious deficiency. I reached out to Volkswagen in 1955 to issue my complaints (I yelled at a gravestone in New Jersey of someone I’m pretty sure worked at VW of America in the PR department from 1953 to 1966), and I’ll update you when I hear back.

I'm a co-founder of the Autopian, the site you're on RIGHT NOW! I'm here to talk to you about taillights until you cry and beg me to stop, which I absolutely will not. Sorry. Hug? Also, David's friend.
Read All My Posts »
PrevPreviousSeven Cheap Cars I’d Be Tempted To Buy Right Now If Enough People Became Autopian Members
NextWhat Car Deserves To Be Its Own Brand? : Open ThreadNext