It’s time for another Shitbox Showdown! Today, we’re looking at a couple of legendary sports cars, in anything but legendary condition. First, let’s see which level of sedan difficulty you chose:

Huh, I was not expecting that. I bet if the Jag’s engine were in one piece, the vote would have been tighter. But you chose the safe and easy path. Honestly, I would too. That Jag is beyond my abilities.

Before we get to today’s cars, I just want to say a quick word about “boring” cars, a charge that was leveled against the Nova by a few commenters. Honestly, I don’t find any car boring. No, not even those. Or those cars that you’re thinking about. They’re just used in boring ways. Puttering back and forth to work in something like that little blue Nova is indeed boring, but what about autocrossing it? Or driving it from Portland, Oregon to Portland, Maine using only two-lane roads? Or using it to visit every National Park in the lower 48 states in reverse chronological order? Not so boring then, is it?

Alright, I’ll put the soapbox away. Let’s look at some cars. Today’s choices are both renowned inexpensive performance cars, both great handlers, both with a strong following even today, and both turning the corner from old and affordable to legitimate classic. But both need some help to get back to anything like their former glory. 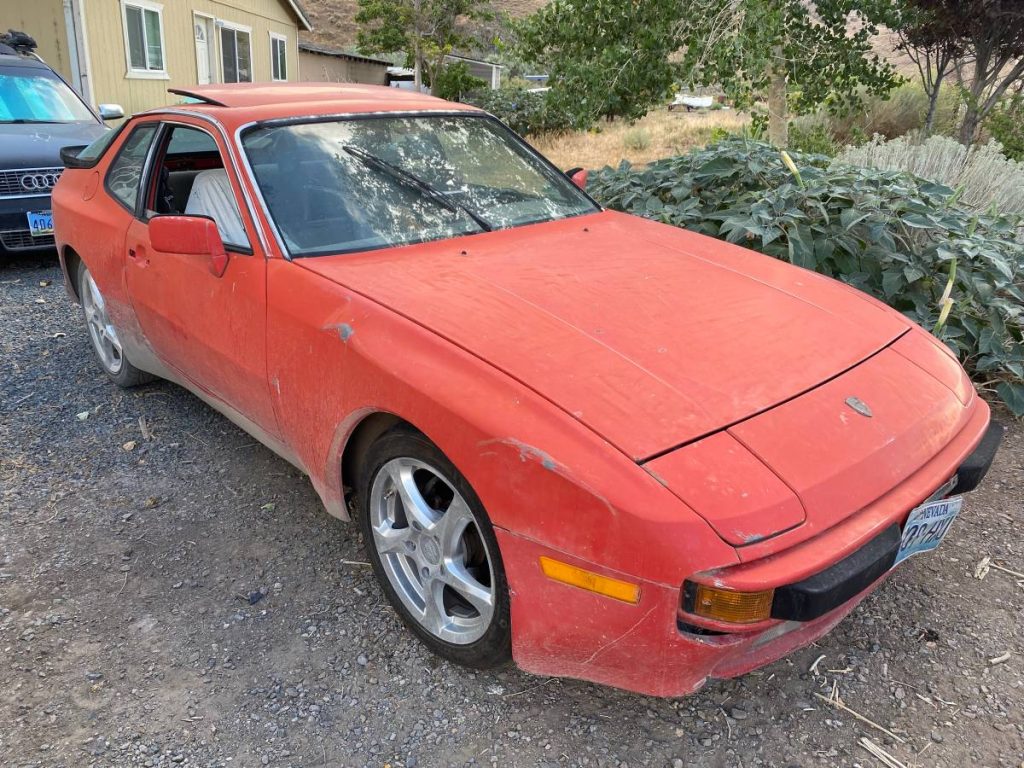 Runs/drives? Yep, according to the seller.

Almost from the moment that it was introduced, the Porsche 944 was synonymous with yuppie affluence. Miss Christina drove one. So did Sam Baker‘s crush. More expensive than the entry-level 924, but more approachable than the 911 or 928, the 944 was the car you could almost daydream about owning one day. And the fact that it handled great and was no slouch on acceleration (for the time) didn’t hurt, either. 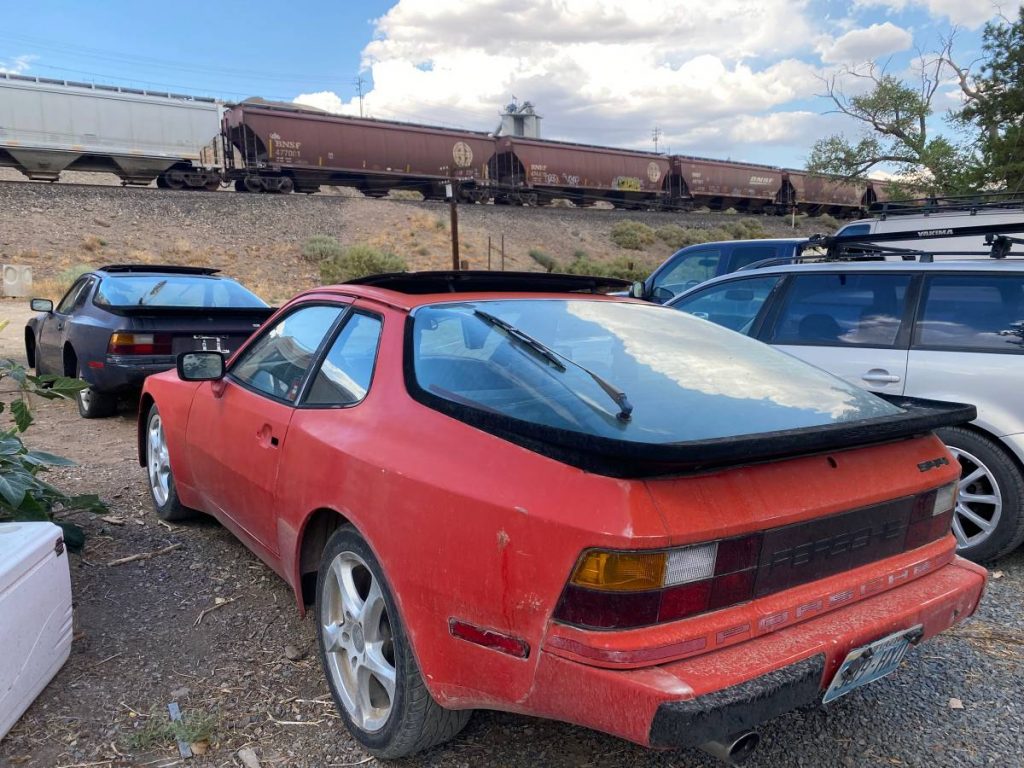 Unfortunately, this 944 is not going to turn many heads these days. Its Guards Red paint is faded to a morose matte orange, it appears to be missing both exterior door handles (very common for VW/Porsche/Audi of this era; they broke if you looked at them funny), and it wears a set of wheels from a newer Porsche that don’t fit well. The 944 has the same problem as the SN95-era Ford Mustang when it comes to aftermarket wheels: If you don’t match the wheel offset to the width of the fenders, it just looks stupid. 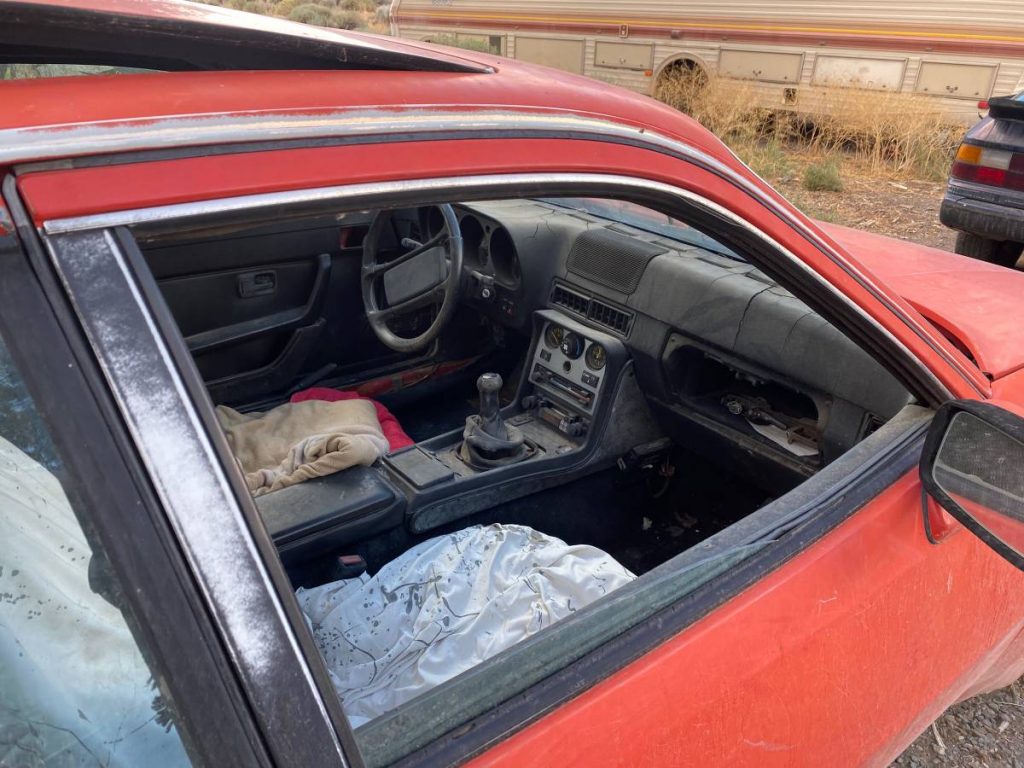 The ad is light on both description and photos, so we’ll have to make some of our own observations. The car “runs fast” but “needs TLC” according to the seller. It looks to me like “TLC” includes a good chunk of the interior. I don’t know if the window was rolled down for the photo, or if it won’t go up, but if it’s the latter, I imagine something from the Nevada desert may have made this car its new home. Watch where you sit on a test drive. 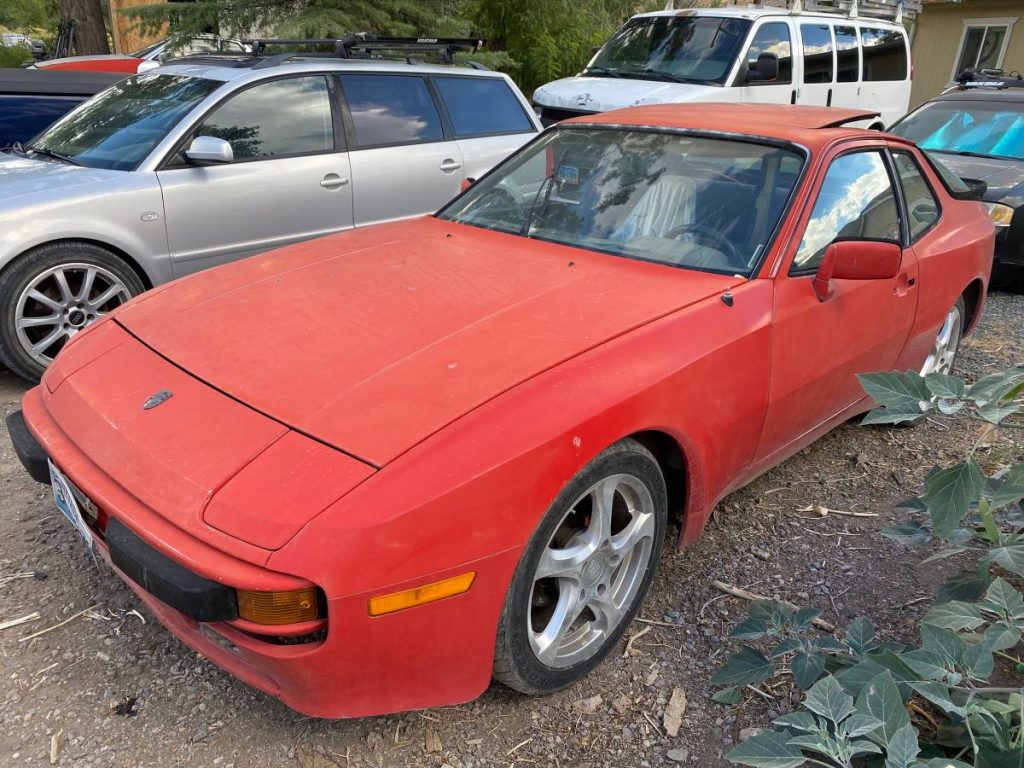 If it does indeed run well, what we may be looking at here is a good candidate for a cheap track car. Or – here’s a thought – a Gambler car. Everyone does safari 911 builds; why not a 944? 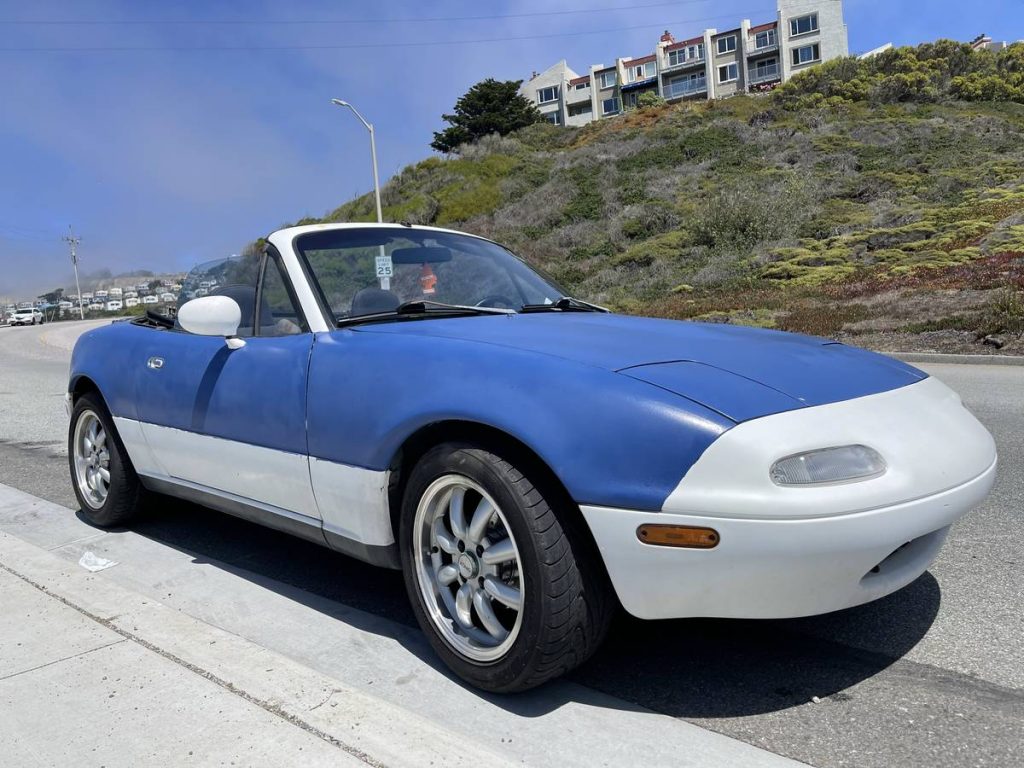 The Mazda Miata should need no introduction. For more than three decades now, it has been the darling of car-lovers everywhere: an inexpensive, sharp-handling, soulful little twisty road companion. And the amazing part is that list applies to the 2022 model the same as it does to this 1990. The Miata is like that friend from high school who shows up to the reunion looking at least as good as, if not better than, they did back then, but you can’t even be upset or jealous about it, because they’re just so nice. 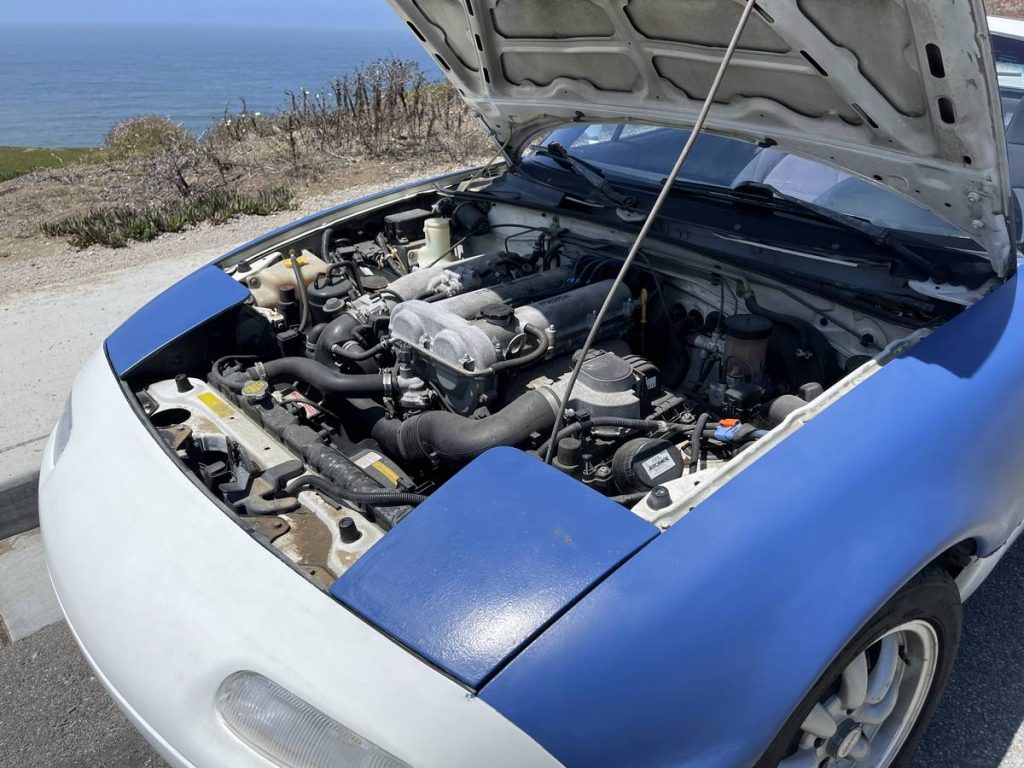 I was lucky enough to own a 1991 Miata, in similar condition and with similar miles, for many years, so this all looks familiar to me: the little 1.6 liter twin cam engine with its valve cover designed to look like an old Alfa, the snug bucket seats, the high center console, the short stubby shifter that changes gears with the flick of a wrist, the dashing top-down profile that just makes you want to get in and drive. 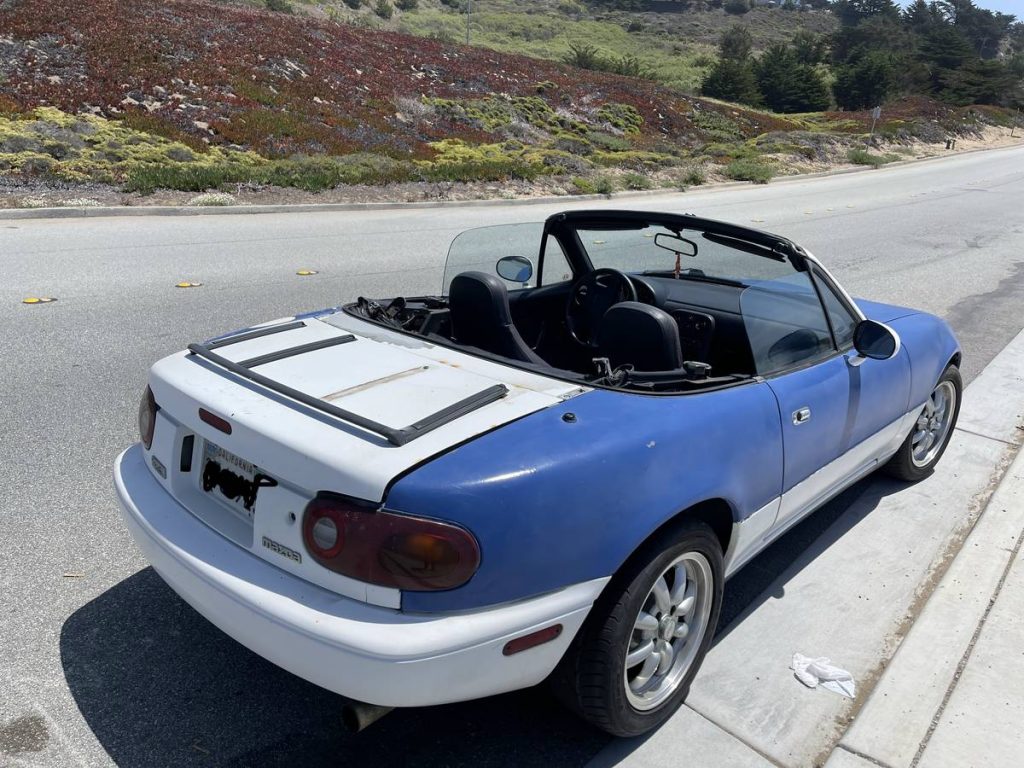 I don’t know what’s going on with the weird two-tone job on this one, but at least the body is straight and rust-free. It does need a new top, but it’s not hard to install that yourself, and duct tape will do fine until you get around to it. It wears a nice set of aftermarket wheels, and the seller says it has new brakes all around, and a current California registration, so you should be able to drive it away without worry. 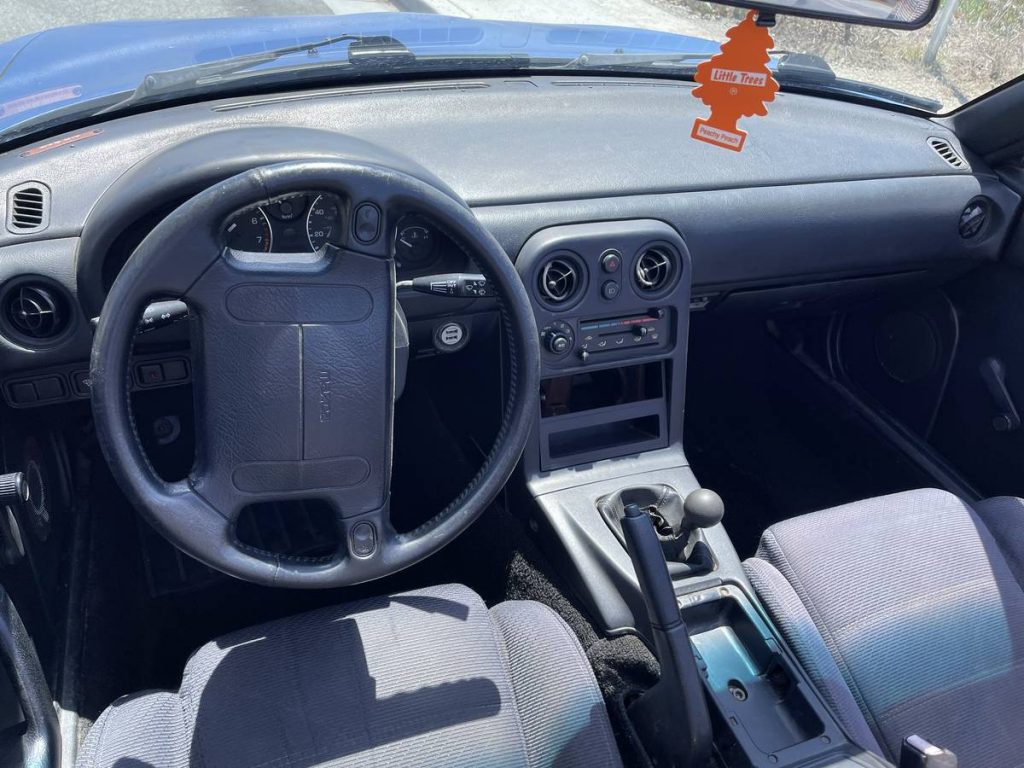 The seller does note a few little problems. It has a broken trunk latch and a “malfunctioning” pop-up headlight on the left side. I’ll bet I know exactly how it is malfunctioning, because mine did it too: the stop on the motor is worn out, so the headlight will cycle up and down on its own, over and over again, as if the car is winking at everyone. It’s funny the first few times.

And there they are: two sports car icons with a cheap price of admission, but needing some work to bring out the best in them. Which one is more your speed?