The Dodge Charger and Challenger we know and love will be leaving production in 2023, but I don’t think we should be sad. The cars have laid rubber all across the U.S. for over 15 years, and if we’re lucky, they’ll  be replaced by something like this: The Dodge Charger Daytona SRT Concept, a beautiful all-electric muscle car that “offers a glimpse at the brand’s electric future through a vehicle that drives like a Dodge, looks like a Dodge and sounds like Dodge.” The thing offers some seriously unconventional features for an EV. Here’s what we know so far.

Dodge is in a bit of a pickle. The brand has built its name, in part, on raucously loud, powerful internal combustion engines, and now has to pivot to electric propulsion like the rest of the industry. Many of the brand’s customers are EV skeptics, believing that the only proper engine for a motor car is the V8. I don’t fault them for this; V8s are great. (And, to be fair, many people outside of Dodge’s customer base are are EV skeptics). But getting those skeptics onboard with Dodge’s new EV direction is going to be tricky, and it seems Dodge’s strategy is to acknowledge those customers’ skepticism, commiserate a bit, and then use that commiseration to build trust that gets customers to buy into electrification. At least, that’s what the strategy looks like to me based on this quote from Dodge’s CEO Tim Kuniskis, who showed off the new Daytona concept at the company’s annual drag race-filled event on Detroit’s fabled Woodward Avenue:

“We didn’t ask for the rules to change. We didn’t want them to change, but they did. And we can try to outrun them, but that would be a nine second pass straight into extinction. Or we can do what we did: read their rules. Study their rules. Find their gray areas, then unleash the Banshee. Trust me, this is not the EV they want you to have. This is the way Dodge does EVs.

Dodge also seems to be trying to keep some of the elements that fans of ICEs like, such as engine noise. In fact, the Daytona SRT Concept comes with an “exhaust” system as loud as that of the Hellcat Charger, which is kind of hilarious. Dodge calls it the “Fratzonic Chambered Exhaust,” referencing the Fratzog Dodge logo. From Dodge’s press release:

While most BEVs embrace their virtually silent electric motors, that just wouldn’t do for Dodge. The Charger Daytona SRT Concept voices a 126 dB roar that equals the SRT Hellcat, generated through a new, patent-pending Fratzonic Chambered Exhaust system. Yes, Dodge added an exhaust to an electric vehicle.

The industry-first Fratzonic Chambered Exhaust pushes its one-of-a-kind performance sound through an amplifier and tuning chamber located at the rear of the vehicle. The Fratzonic Chambered Exhaust represents the next generation of tactile, bone-shaking, muscle attitude, creating a visceral “Dark Matter” sound profile experience in concert with the eRupt transmission.

So Dodge has built some sort of acoustic chamber that takes the electric motor’s natural sound and massages it in just the right way before amplifying it, and presumably delivering it through speakers. Here, listen to the new Dodge Charger Dayton SRT Concept “rev” its two (presumably) electric motors that drive all four wheels:

Not only does the new concept come with an exhaust, there’s also a multi-speed transmission, which is unusual for an EV. Electric motors’ ability to produce good torque across a huge range of revs means most automakers simply bolt those motors up to a ~10:1 gear reduction, and offer no shifting at all (there are some exceptions, like the Porsche Taycan). So this is quite interesting:

Unlike typical BEVs, the Dodge brand’s eRupt multi-speed transmission with electro-mechanical shifting delivers distinctive shift points, throwing shoulders into seatbacks in true Dodge style. The Charger Daytona SRT Concept also boasts a PowerShot push-to-pass feature. Activated by the push of a button on the steering wheel, PowerShot delivers an adrenaline jolt of increased horsepower for a quick burst of acceleration.

I don’t have many more details on this; I’m curious if this is a literal transmission as we know it or a simulated one. The way that’s written makes me think this is literally a transmission with multiple gear ratios. Dodge even says that the “shifter” for this transmission even looks more conventional. I’m excited to dig into the tech as soon as I have the opportunity. 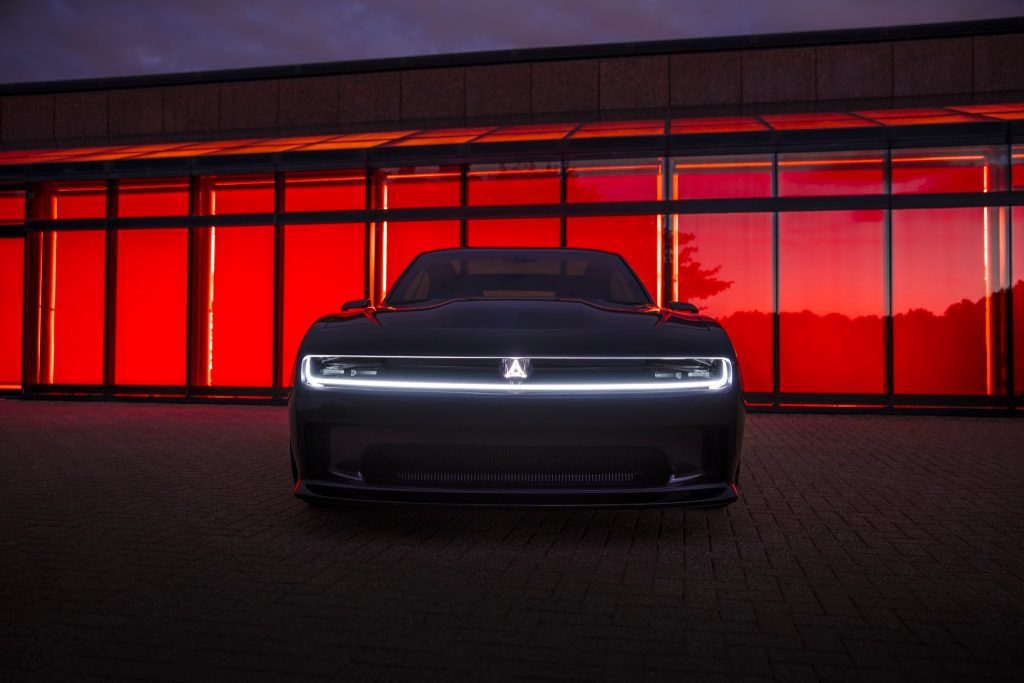 Dodge isn’t giving too many details about performance right now. The automaker says that the Daytona is riding on a 800V Banshee propulsion system. It has standard all-wheel-drive and Dodge says that it’s faster than a Hellcat in “all key performance measures.” So, we’ll have to wait to see what this can really do.

In the meantime, let’s continue to check out what Dodge has rolled out for us to see.

You can’t easily see it in the press images thus far, but Dodge has done some neat trickery with the front end. It maintains the squared-off muscle car look while also getting better aerodynamics. Dodge did it by turning what would normally be a gaping grille into a sort of wing. Dodge calls it the R-Wing. 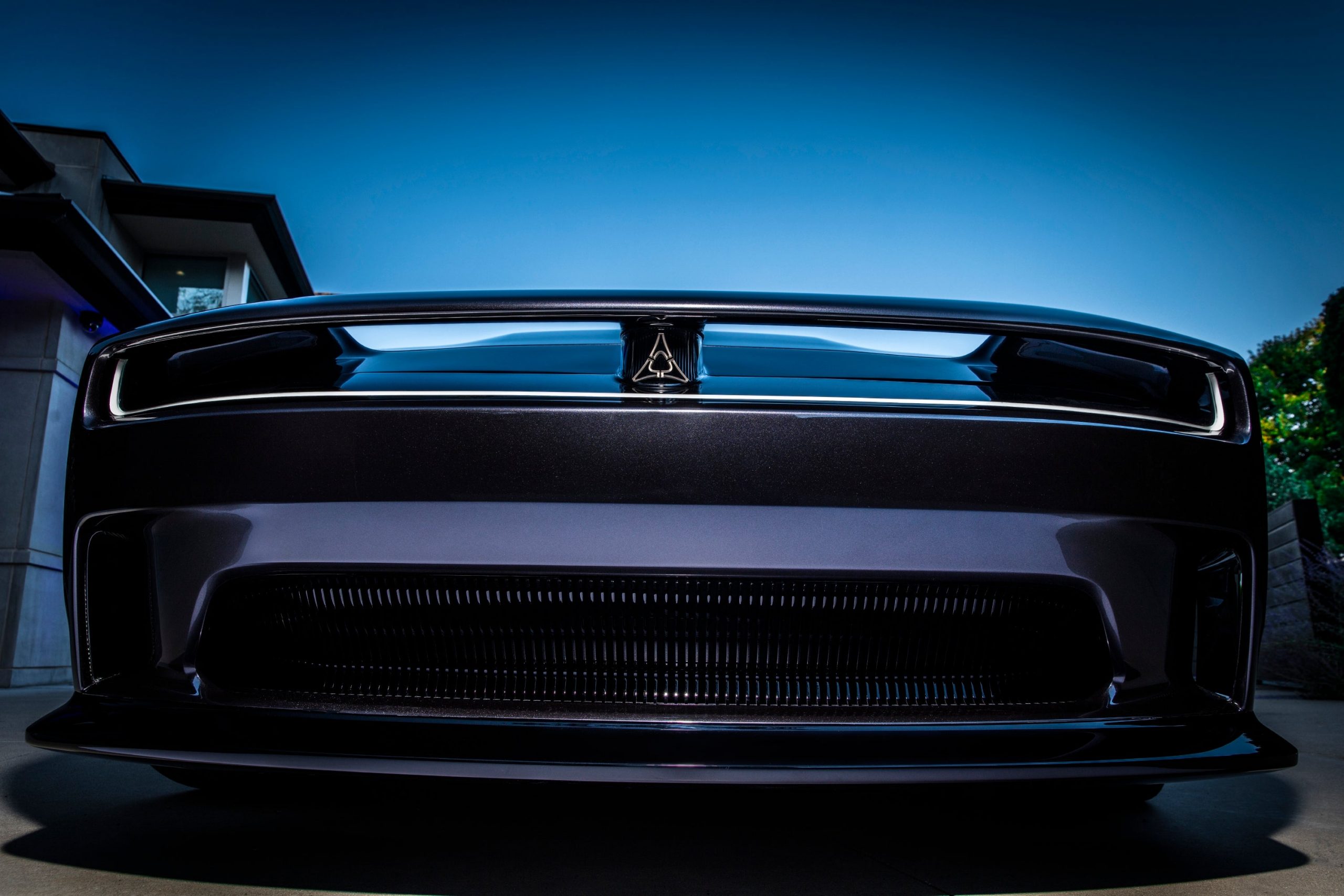 The R-Wing functions as an homage to the original Charger Daytona design. And more than that, Dodge says that it helps with giving this new Daytona better aerodynamics and downforce. The Fratzog logo stands proud on the Daytona SRT Concept, and it’s a welcome departure from the twin stripes that we’ve been seeing for so long. That logo was previously used on Dodge muscle cars from 1962 through 1976. Dodge says that it was previously used without context, but now the Fratzog will represent both the brand’s electric future and its commitment to performance.

The interior of the concept keeps the vehicle’s functions driver-centric. 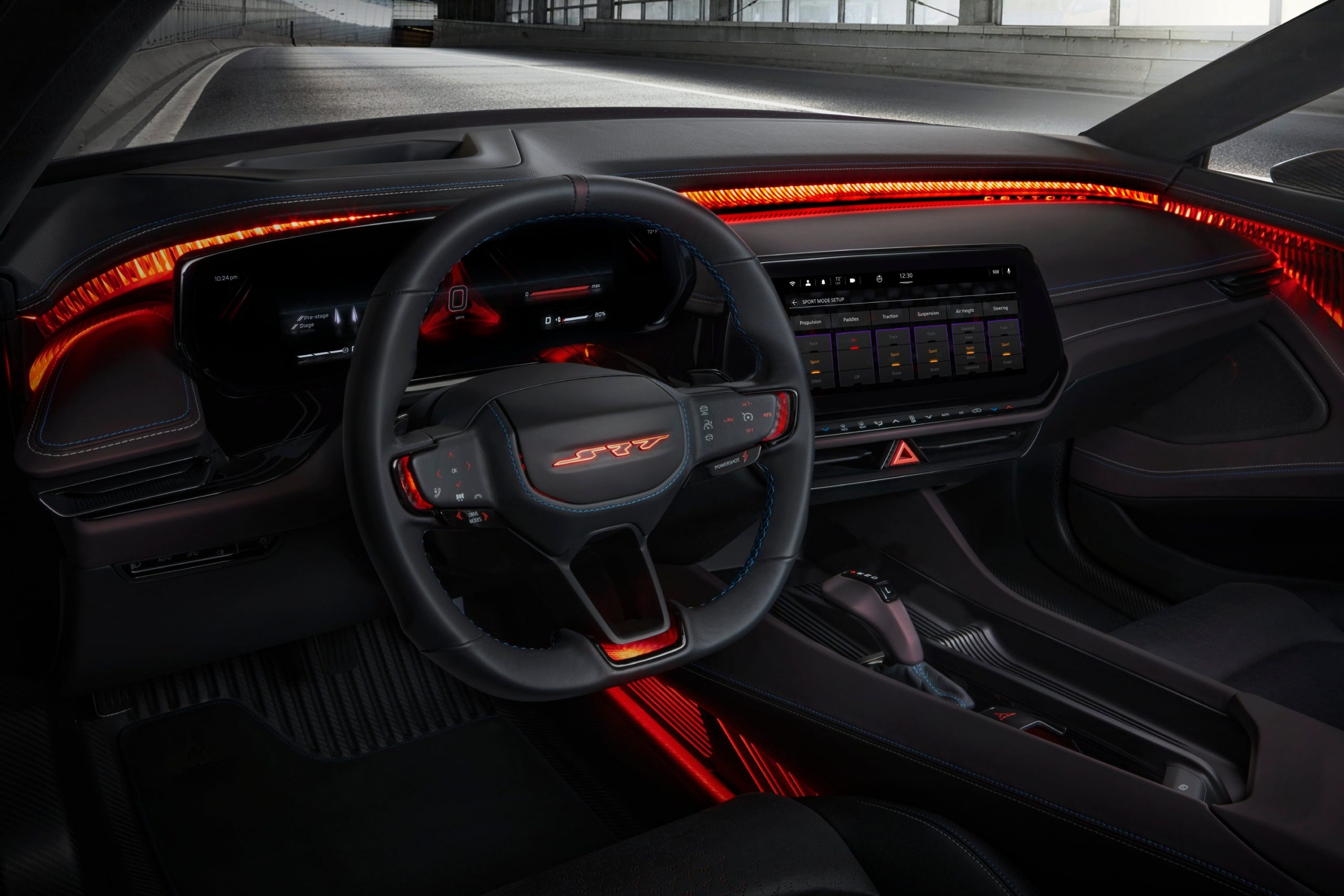 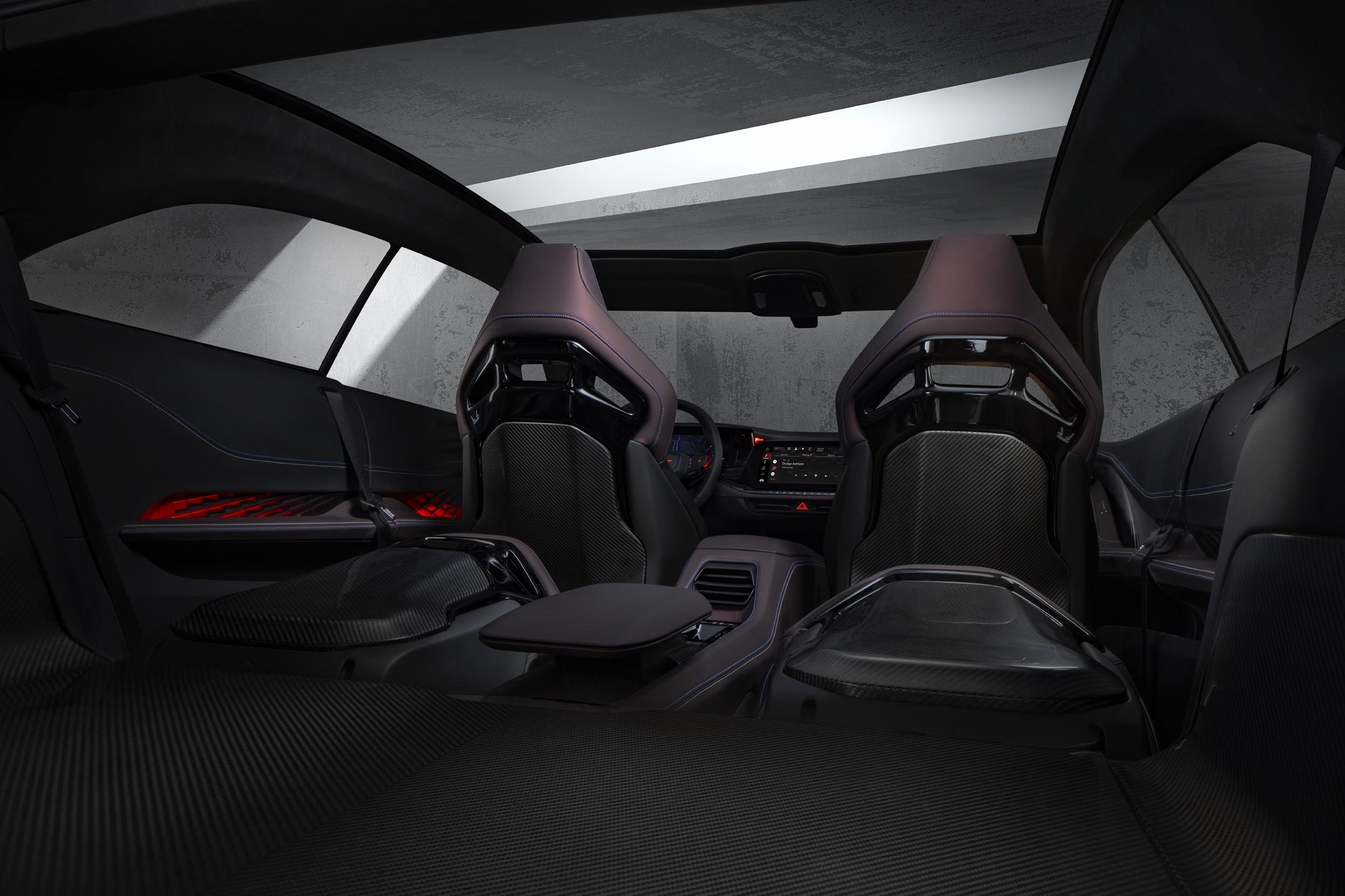 Look towards the center stack and you’ll see another nod to the past: a pistol-grip shifter. As expected with today’s vehicles, there are huge screens with a 16-inch curved instrument cluster, a 12.3-inch infotainment screen, and an 8-by-3-inch HUD. The interior also sports a glass roof and instead of a typical trunk lid, there’s a liftback.

Some of this may sound silly to you, but I actually like Dodge’s approach. I don’t think ignoring ICE enthusiasts and simply saying “We’re building EVs now, and they’re going to be silent and not offer any shifting” is the right move. There are lots of EV skeptics out there; meeting them where they are, and showing the way to EV salvation step-by-step, while giving them some of the joys that many electric vehicles today don’t offer (like sound and shift points) is an okay strategy to win V8-lovers’ hearts. 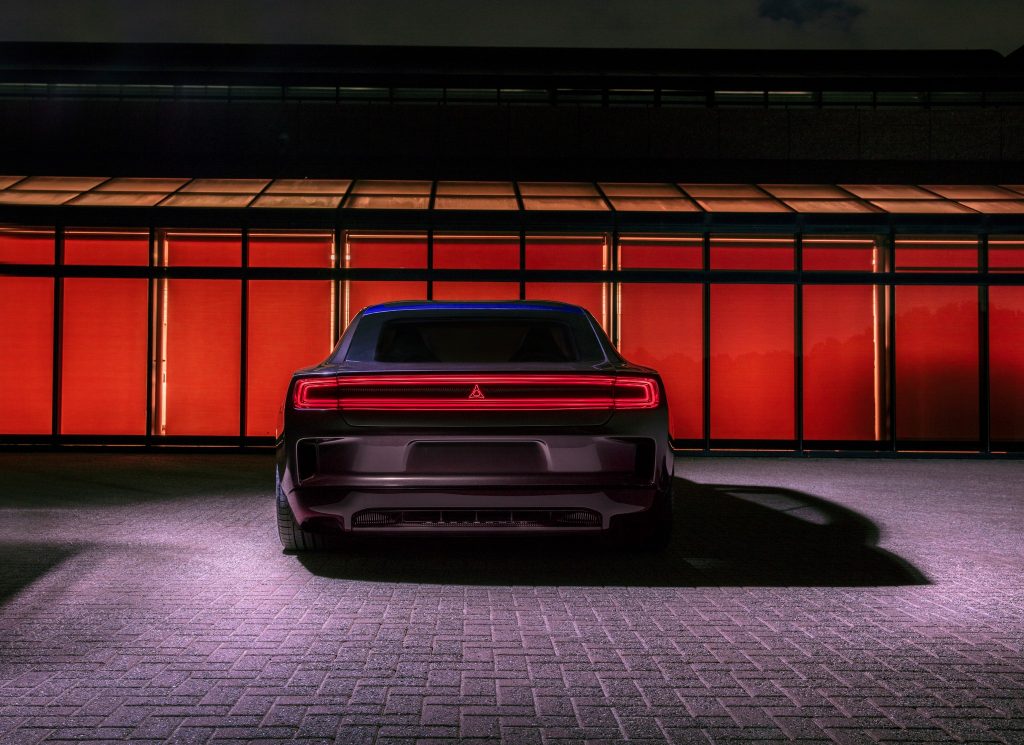