One thing I love about old car brochures are diagrammatic pictures showing the flexible interior configurations of their cars, demonstrating how people and cargo can best be hauled via folding or unfolding seats and platforms. Usually, these are all pretty sensible, and show interior configurations you’d absolutely choose to use, depending on if you had to carry six people or just two and a sedated llama. A brochure for a 1971 Saab I came across, however, has shown me something genuinely baffling. Let’s explore it.

First, in case you’re sadly unfamiliar with the sort of diagrams I’m talking about here’s a couple of other examples, both from Renault, because for some reason the French automaker always set out to provide the most visual details for the crap that could be hauled around: 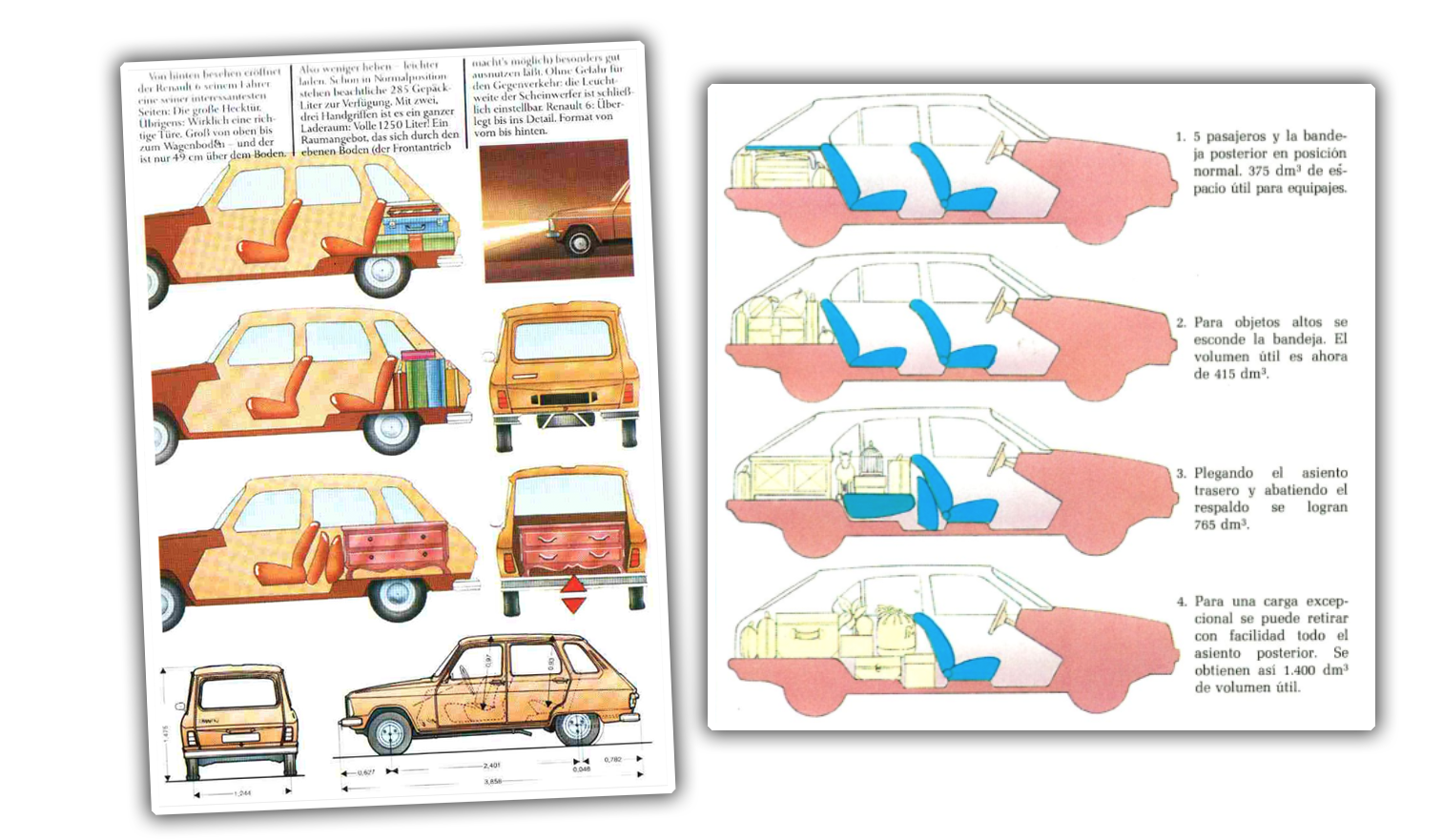 Most carmakers’ brochures just used flat colored blocks to show the various seating or cargo areas, but not Renault! The company wanted you to know you could haul ornate dressers or variously colored suitcases or birdcages or houseplants or sacks or even miniature horses.

The diagram that I want to consider today, though, was for a 1971 Saab 95. The 95 was the wagon version of the Saab 93 and later 96 coupé, and was introduced in 1959 with Saab’s DKW-inspired 841cc inline-three-cylinder two-stroke engine, but switching in 1967 to a V4 provided by Ford of Germany. 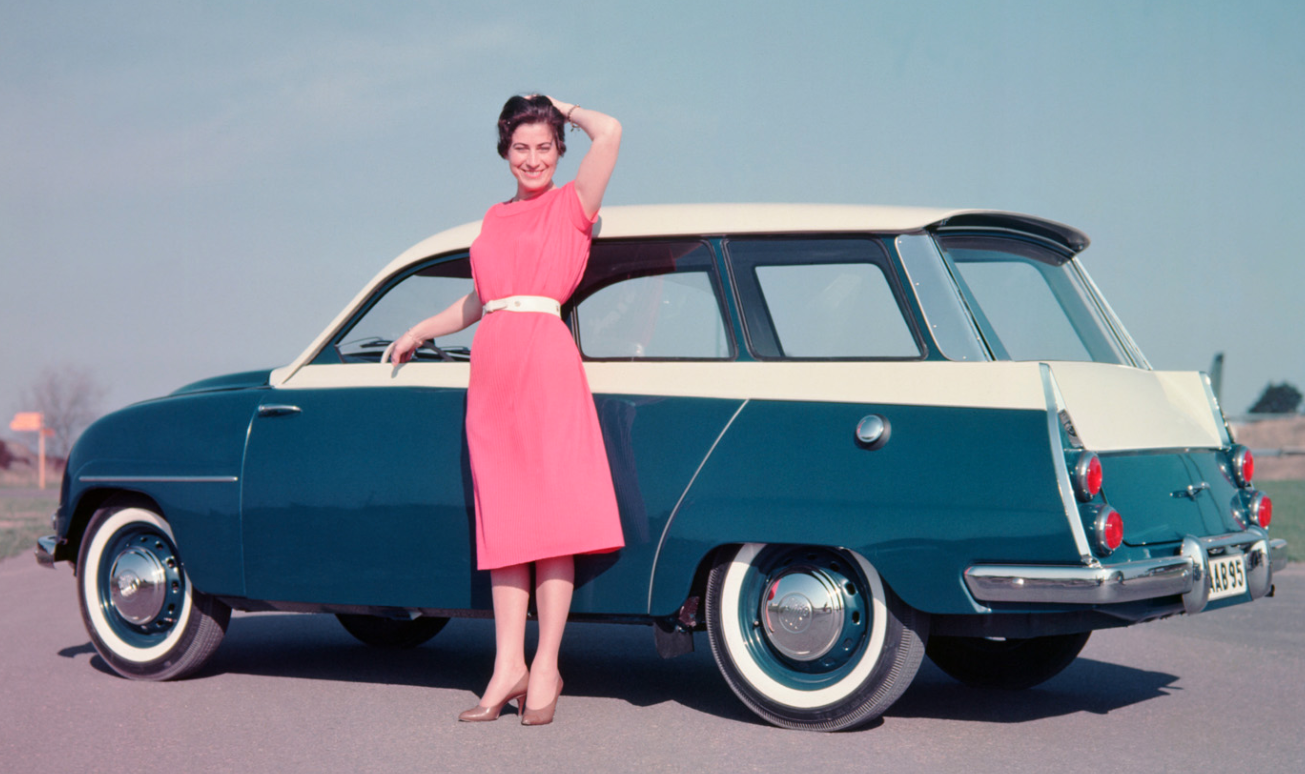 The thing to keep in mind about the Saab 95 is that it was never a big car by any standard, yet it was capable of carrying seven people, thanks to the jump seats at the rear.

Of course, the kind of people you could stick in those jump seats are probably the young, not-fully-grown kind, as there really wasn’t that much room back there: 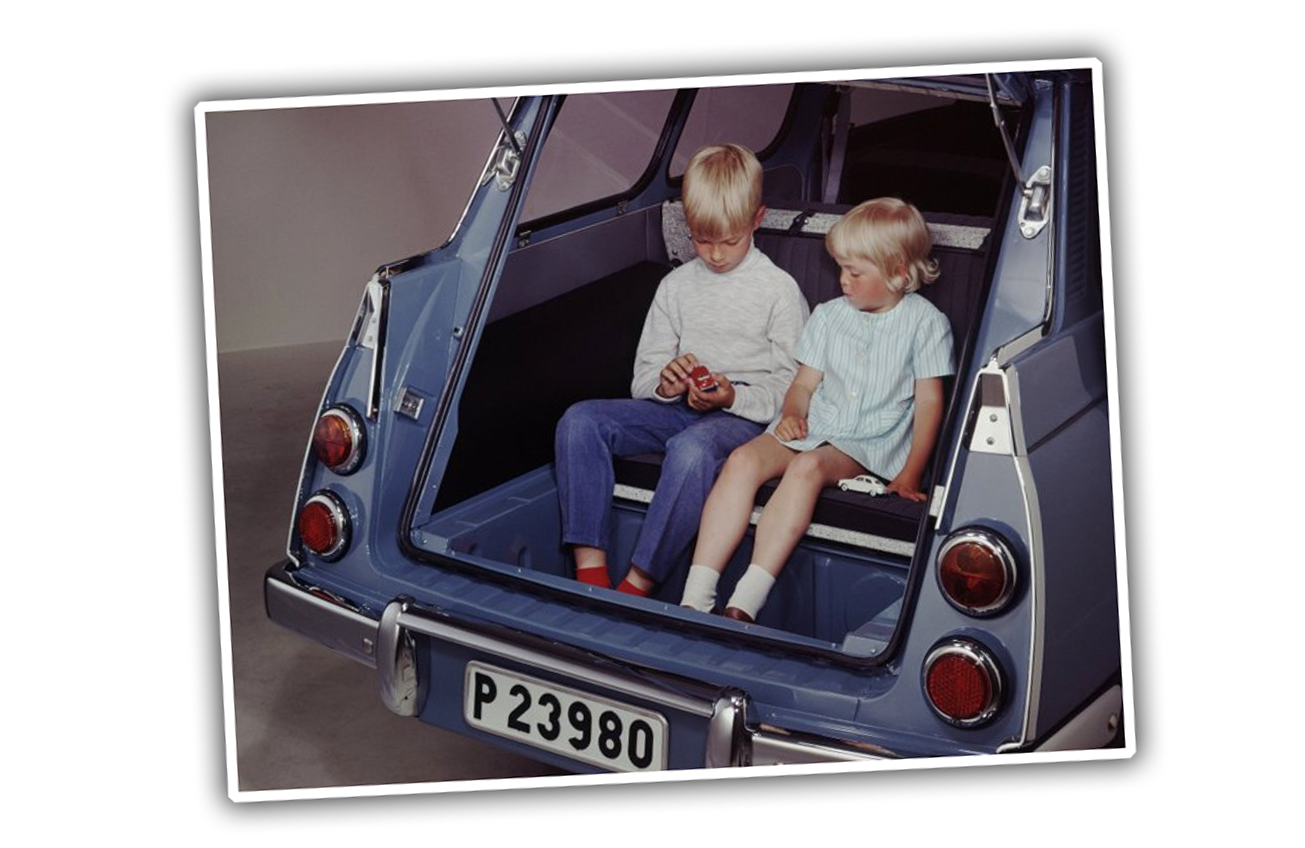 Sure, those little Swedes look comfortable, legs happily nestled in that lower bay that held the seat when folded, but a full-grown Swede, all tall and blonde, would likely have found this a bit cramped. Here’s another picture of the jump seat area, minus the young Swedes, from a ’71 that showed up on Bring a Trailer: 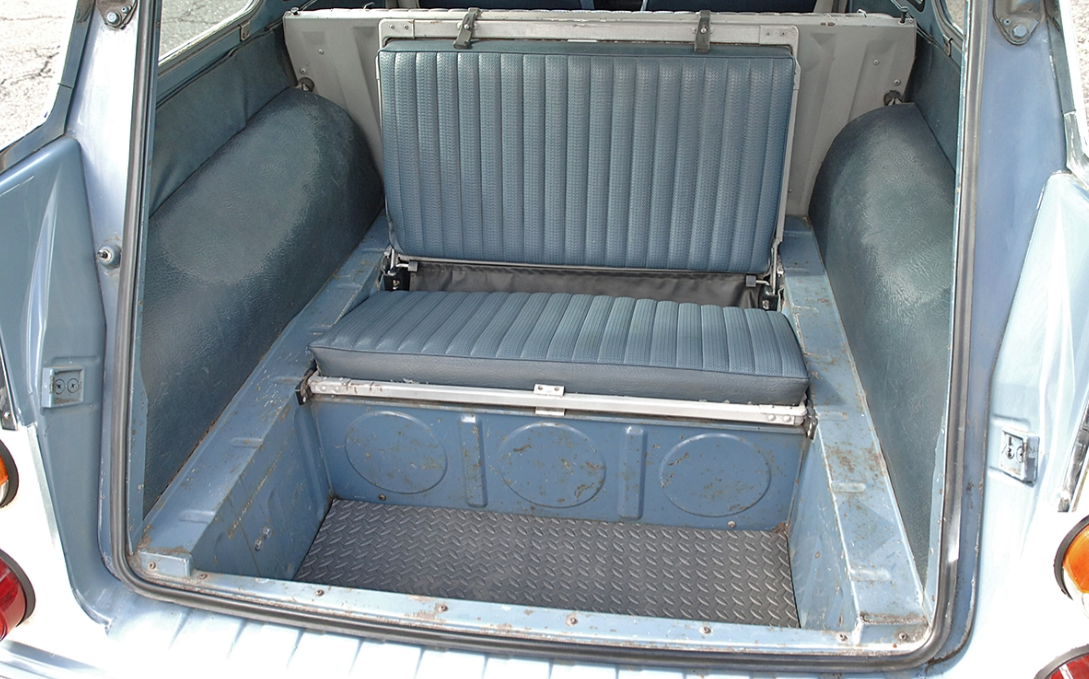 Even with that in mind, the Saab 95 represented a real packaging triumph, and Saab was wise to highlight this in its brochures with this comprehensive diagram:

So, my fundamental question: Who the hell wants this? I mean, look at it:

Nothing about this arrangement makes any sense. The 95 was a two-door, so that green cargo area there would be really, really difficult to access; you’d have to either get out and fold the front seat forward, or get the people out of the back and fold down the jump seat, then crawl inside to the folded back seat to get whatever the hell you have in there. Nothing is convenient here! 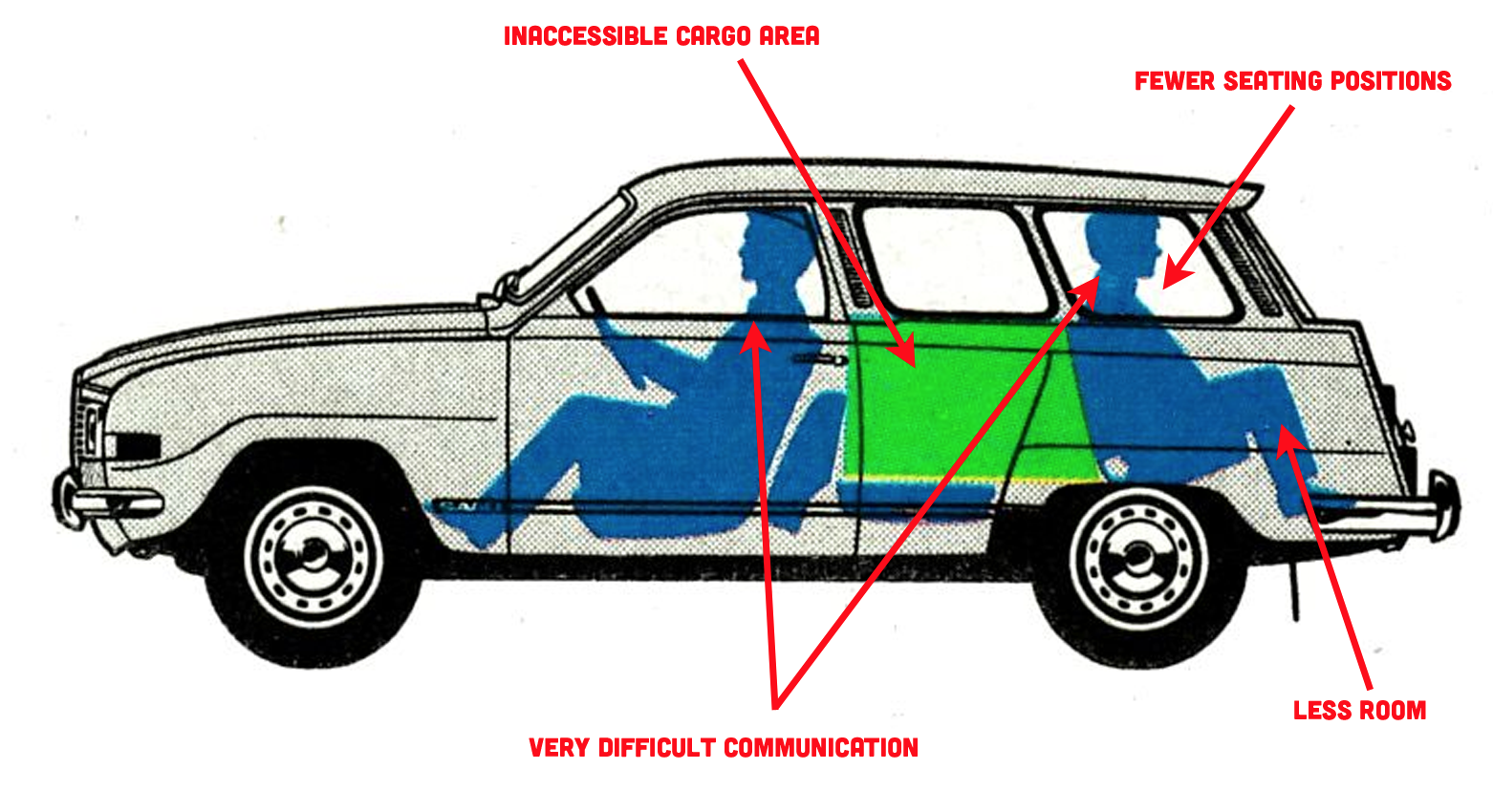 Why, exactly, would one choose this arrangement over the normal wagon layout? That basic layout gives more room for people and cargo, and gives better access to the cargo area, too. The only advantage I can possibly think of is that in this case, all passengers have direct access to a door of some kind, but that rear hatch doesn’t have an internal release accessible from the rear area, so someone would still have to get out of the car to free whoever is in the back.

Are there any contexts where this setup makes sense? Maybe you’re the driver, and you have such overwhelming contempt for your passengers that the only way you can stomach driving them is to get them as far away from you as possible, facing the opposite way?

Maybe you need an inaccessible cargo area in the middle because you have a rabid Pitboodle mix stuck in the middle there and you can’t risk it getting free?

Really, I can’t figure this one out. I suppose it may just exist solely because it’s possible to do it, so they’re going to show it, dammit, whether it makes any sense or not. I get that.

I’m also open to your suggestions; what could this layout be ideal for? Safe transport of a Gorgon head without the risk of turning to stone? Mobile priestly confessionals? I have no idea. You tell me!

I'm a co-founder of the Autopian, the site you're on RIGHT NOW! I'm here to talk to you about taillights until you cry and beg me to stop, which I absolutely will not. Sorry. Hug? Also, David's friend.
Read All My Posts »
PrevPreviousHere’s My Final Design Of An Electric Version Of A Classic American Wagon: A Car Designer Sketches Your Ideas
NextWhy You Should Replace Your Tires With The Ones It Came With Originally: Ask An EngineerNext