Good morning, and welcome to another Shitbox Showdown! Today, we’re checking out a couple of Dearborn’s efforts from the Nineties that have spent more time parked in the hot sun than they have spent actually going somewhere. But first, let’s see what you made of yesterday’s Love Boats:

Looks like the big Lincoln is sunk, and not just in the mud. I really do think that car is in better shape than it looks under all the gunk, but I also agree that the Olds is a better choice. It’s a real shame about the duct-taped seats, though; in good condition, those GM land-yacht interiors are just magnificent.

Now then, let’s take a look at a couple of sedans from the Ford Motor Company. Both of these cars are one-owner vehicles, and both have few miles and almost no clearcoat left. Here they are. 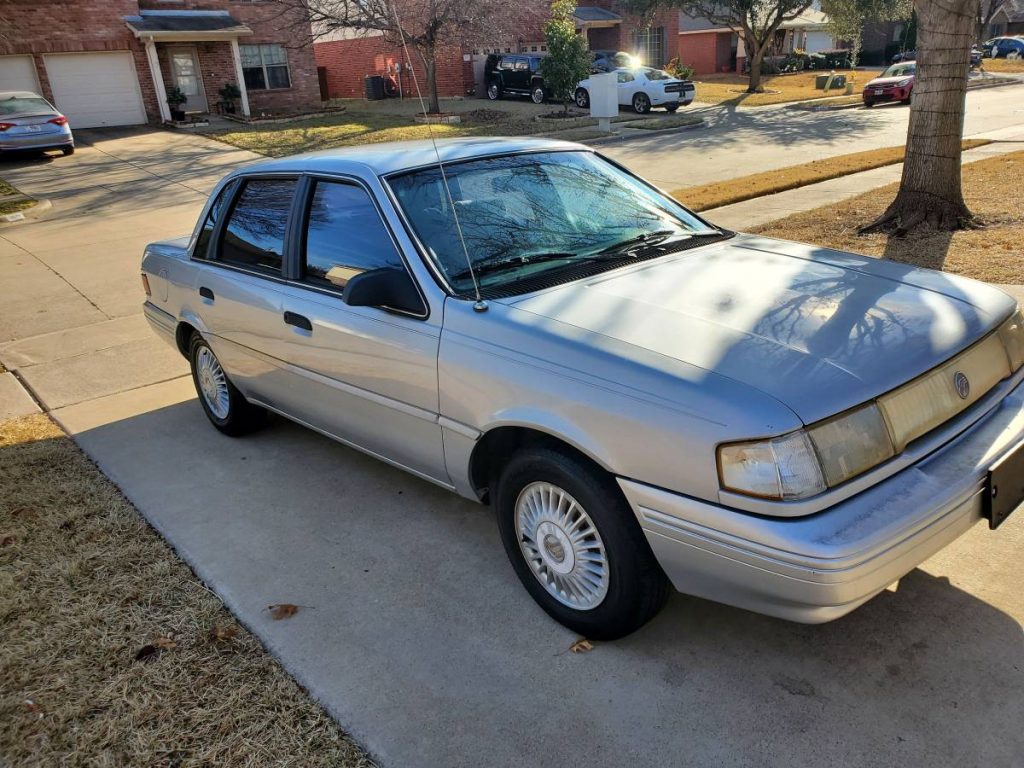 It will come as a surprise to no one when I say that this car came from the estate sale of an older woman. Some cars are just made for the bridge-club-and-beauty-parlor set, and the Mercury Topaz might just very well be their poster child. This badge-engineered twin of Ford’s Tempo features a tepid four-cylinder (which by the way is not the celebrated 2.3 liter Lima four from the Ranger, but rather the old Falcon-style six with two cylinders chopped off) and a particularly slushy three-speed slushbox which, while smooth, is about as pulse-raising as an episode of The Golden Girls. 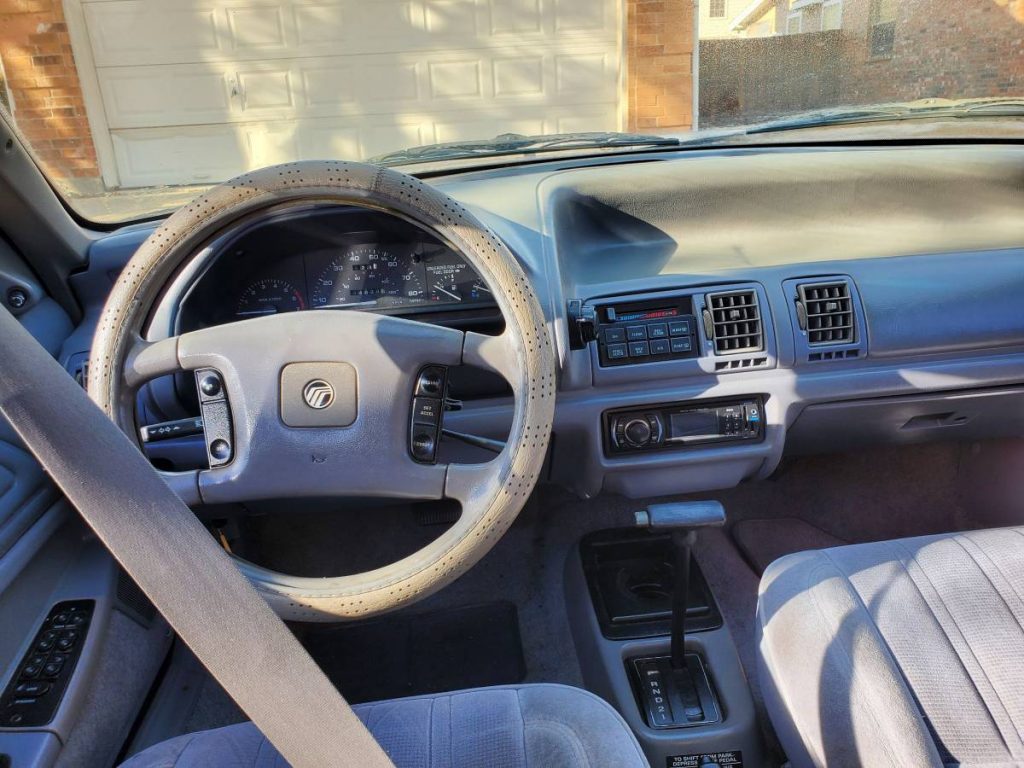 Exciting it is not, but the Topaz is a fairly comfortable car for its size, easy to drive, and has simple, logical controls and good strong HVAC. Unfortunately, Ford never saw fit to equip the Tempo/Topaz with airbags after the passive-restraint requirement kicked in, so it also has those hateful motorized shoulder belts, along with a lap belt you have to fasten manually anyway. 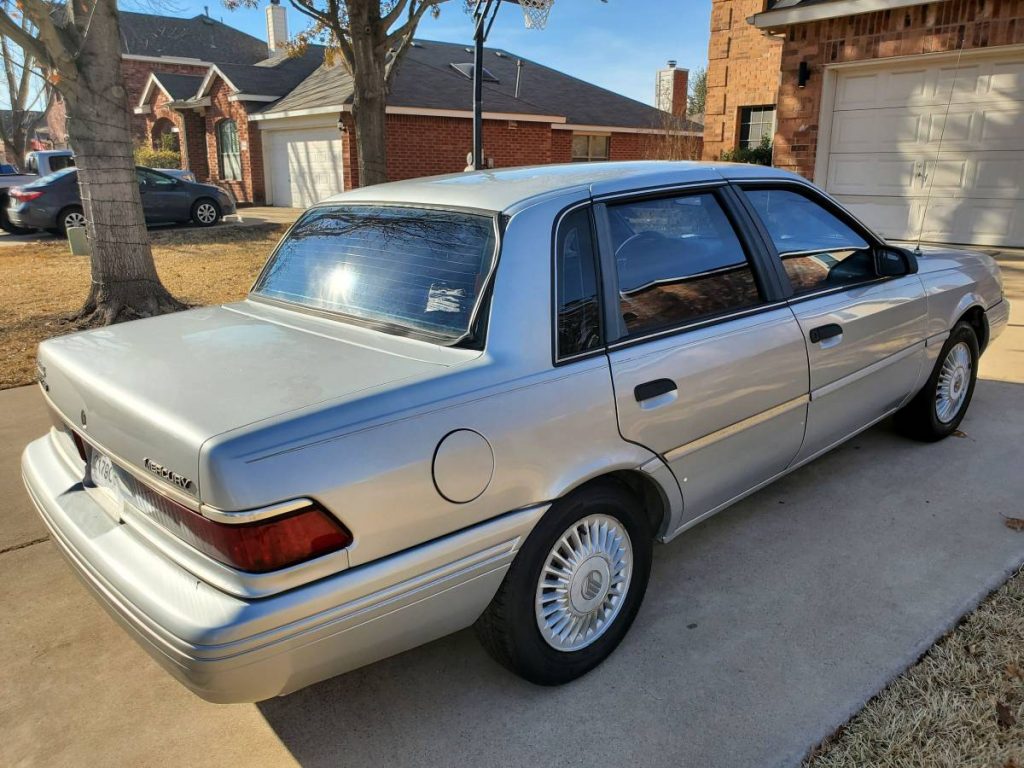 This Topaz has covered a scant 34,000 miles in the Dallas/Fort Worth suburbs, and I’m willing to bet rarely saw speeds above 40 miles an hour in that time. It’s barely broken in, and as long as the original owner kept up on the maintenance (“once a year, whether it needs it or not”), it’s probably a good reliable little car. The paint is dull, and there’s something wonky going on with the rear window seal that’s probably sun-related, but that’s fixable. 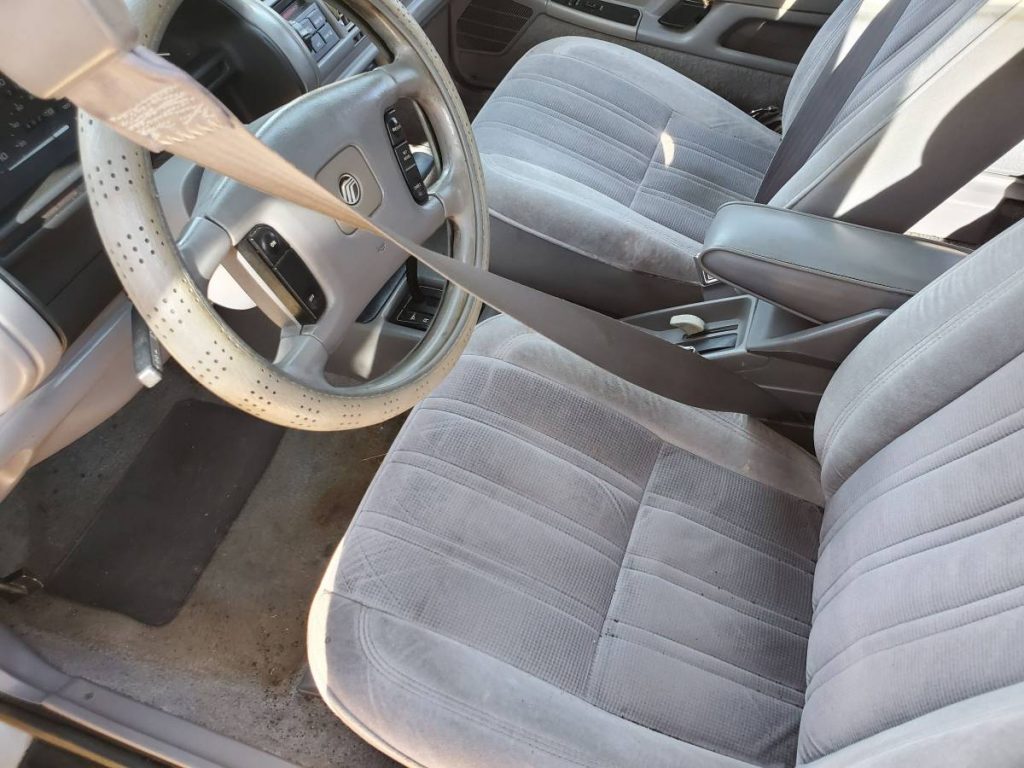 Inside, it’s practially a time capsule, except for some dirty carpet. I owned a Ford Tempo for a while, and I can tell you that those soft gray mouse-fur bucket seats provide almost no lateral support, but are really quite comfy on long drives. 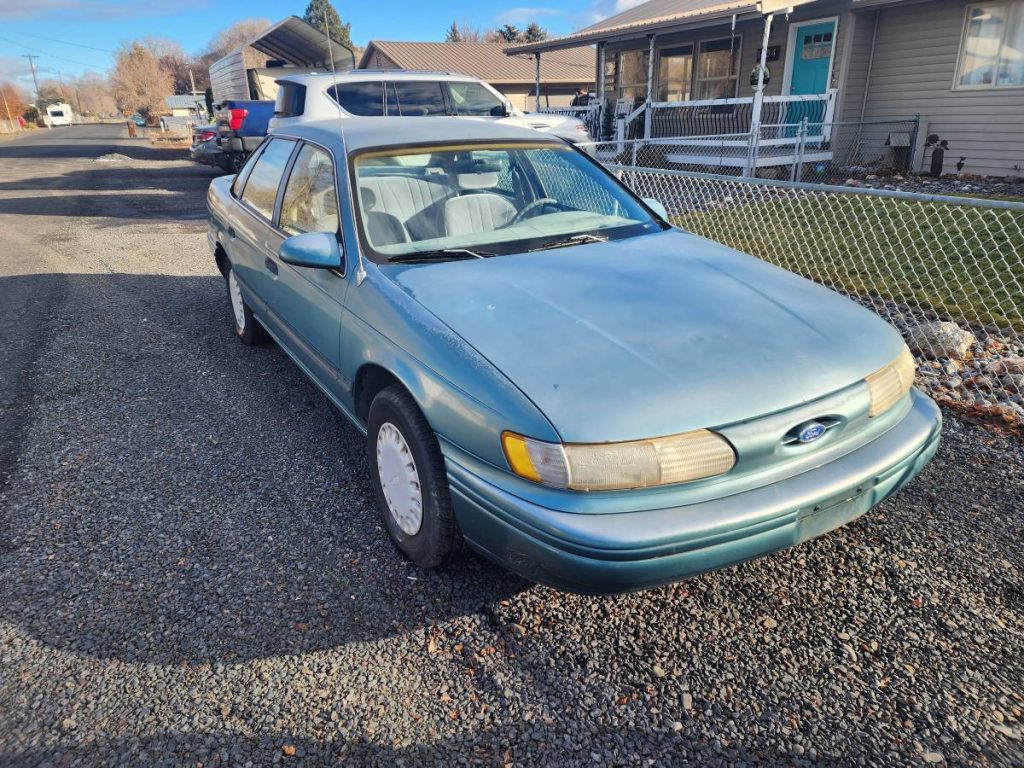 Step up one size from the Tempo/Topaz and you find yourself in the ubiquitous Ford Taurus, here in what was once quite a lovely shade of green. The high-desert sun has cooked all the clearcoat off it, leaving it as dull as a kid’s toy plastic sword. This car was owned by the City of Prineville, Oregon, and apparently was used by city officials in and around the Prineville airport. 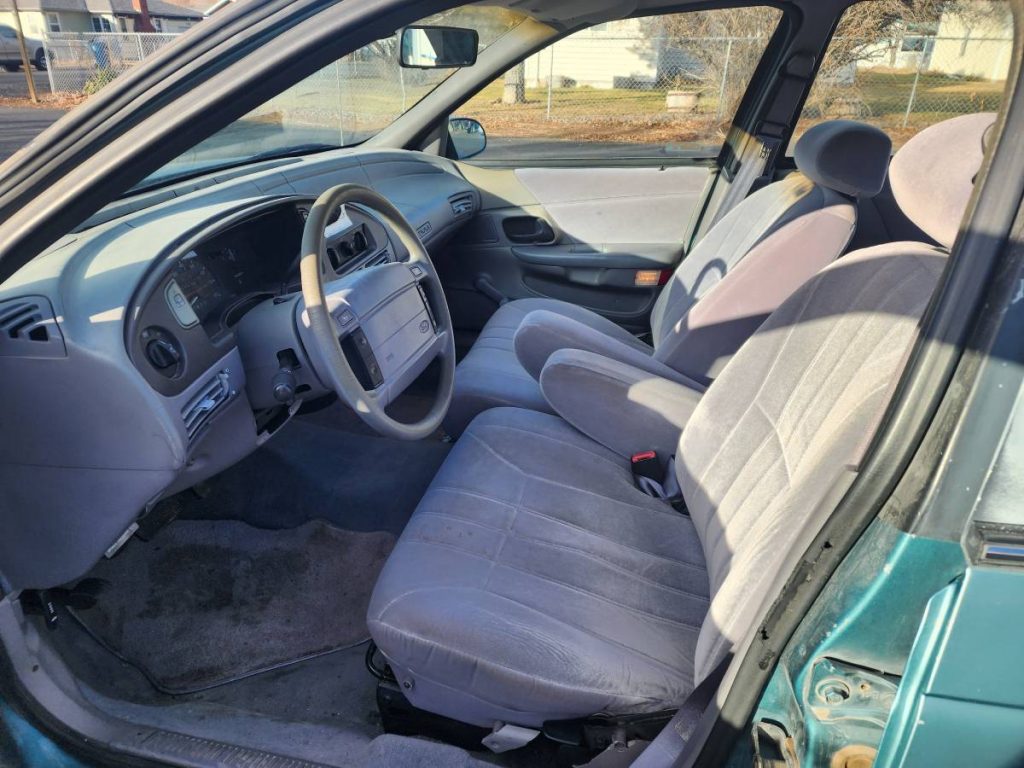 Tauruses of this era sold like hotcakes, and it’s not hard to see why. Again, it’s not an exciting car, but it is comfortable, smooth, reasonably reliable, and was a good value back then. For only two grand, and with only 104,000 miles on the odometer, this one feels like a good value still. 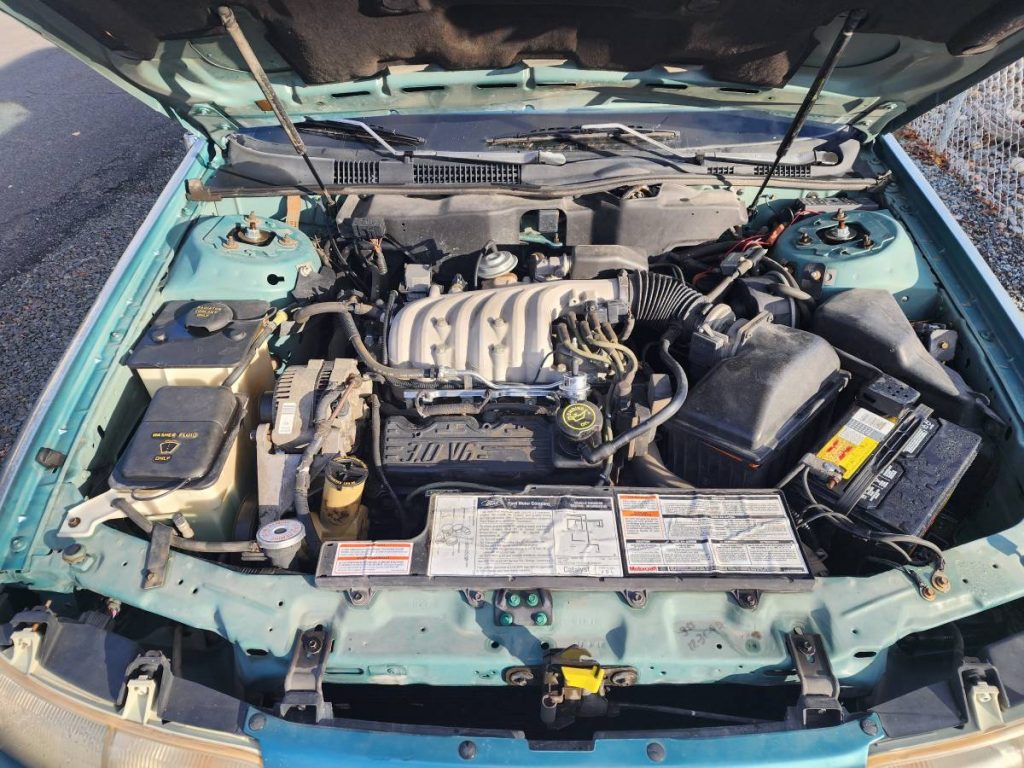 Like the vast majority of Tauruses, this one is powered by a three-liter “Vulcan” V6, a simple sixty-degree cast-iron pushrod affair of no particular distinction, but it works. It sends power to the front wheels through an overdrive automatic which is not known as a paragon of durability, but as long as it has been maintained it’s probably okay. This Taurus has a new battery and is said to run and drive just fine. 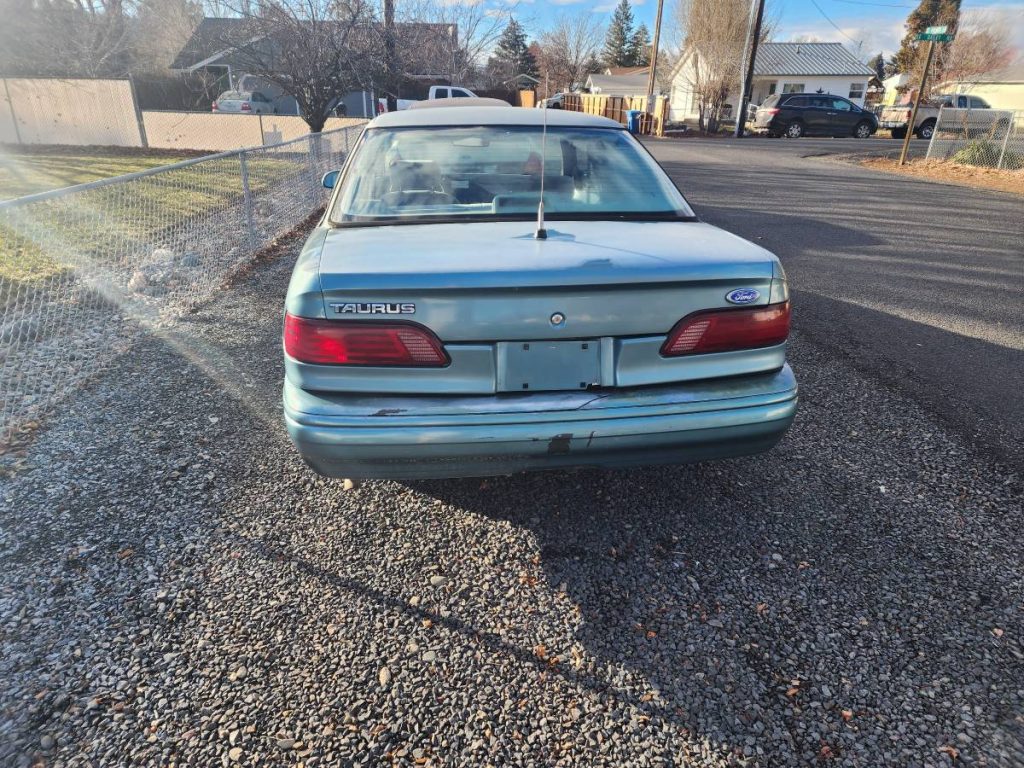 Obviously, neither of these cars are the stuff gearhead dreams are made of. But they’re both good honest transportation, the sort of car that’s getting hard to find these days. And from the looks of it, if you don’t mind some scorched paint, they both have some life left in them. So what’ll it be – Granny’s Topaz, or the city fleet special Taurus?

(Hat-tip to the Underappreciated Survivors Facebook group for alerting me to the existence of these two.)

Pacific Northwest-based self-taught DIYer of all the things. Current fleet: 1971 MGB GT, 1989 Chevy K1500, 2013 Chrysler 300C, 2003 Infiniti QX4, and 1966 Aristocrat Land Commander trailer. Not to mention about 40 RC cars and around 100 model kits...
Read All My Posts »
PrevPreviousA Surprise Air-Powered Treat Upon My Return: Cold Start
NextThe Auto Industry Thinks The Future Of Cars Is Everything But DrivingNext