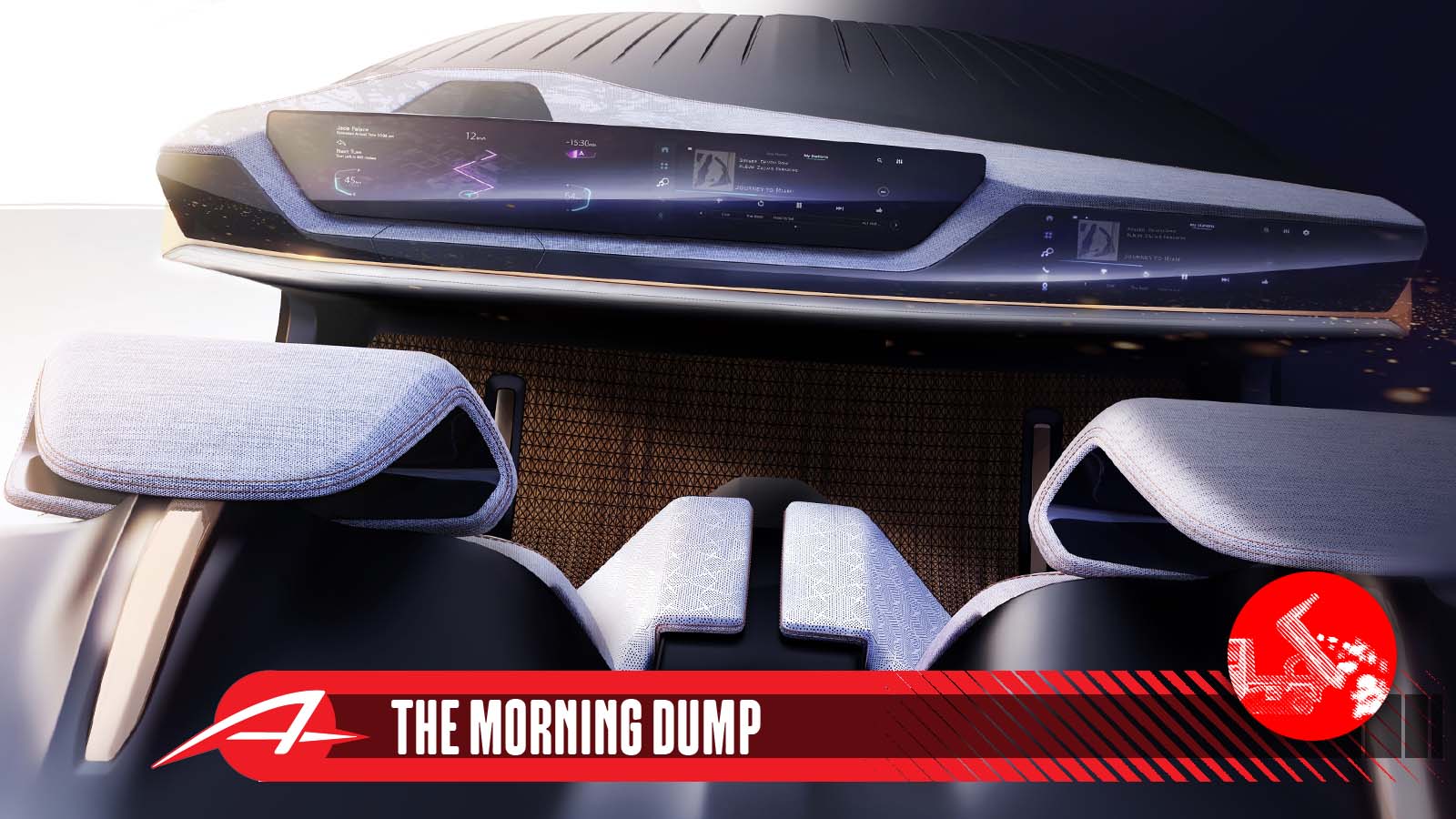 The Consumer Electronics Show in Las Vegas kicked off yesterday and, what once was a show about consumer electronics, is now the most important auto show in the world. Here’s what the future of cars looks like according to the auto industry itself.

The Future Of Cars Is Car Karaoke

Chrysler will debut a two-seat car today with no steering wheel, no doors, no roof, no motor and no wheels. Technically, this is because the Chrysler Synthesis (great name!) is just a technology demonstrator meant to show off the brand’s cabin of the future, but it gives you a good idea of where the industry is heading and where its focus is at the moment.

As far as infotainment systems go, the “smart cockpit” looks much like other modern designs with a massive 37.2-inch screen that serves both the driver and passenger. It’s not going into a production car so it’s a little sleeker than what you’d find in a Mercedes EQS and more dynamic than what’s in a Tesla Model X.

The setup is created to operate with “Level 3 autonomous driving,” better known as nonsense garbage. The promise of Level 3 does allow Chrysler’s new system to use AI to plan your day. They call this MyDay. Here’s how they describe it being used in their press release:

MyDay – Synthesizes and syncs multiple aspects of the customer experience, including calendars and schedules, vehicle status info such as charge status, home smart tech features, weather updates and more, helping to organize and map out an intelligent trip plan for the day

Driving – Vehicle operates with Level 3 autonomous driving, allowing the driver to multitask and access a suite of productivity-based activities, such as video conferencing; recommends lunch locations with convenient parking and charging options; returns home at end of day and performs a smart home “wake up” upon arrival

Chill/Zen/Fun Modes – Creates a sensory experience, including in-vehicle fun and wellness experiences (meditation, karaoke, DJ game), while the vehicle is stationary or driving autonomously. The demonstrator will feature the Synthesis Music Experience, which allows customers to create and synthesize their own music

Of course, saying something is “the future” and basing it on CES is a little self-selecting. Obviously, no one is going to bring a bunch of muscle cars to Las Vegas.

Oops. I was wrong. I’m just hearing that Dodge is going to have a “Last Call” performance festival in Las Vegas to celebrate the Last Call models and introduce a “final 2023 Dodge ‘Last Call’ special-edition model and also highlight Dodge brand’s drive toward an electrified future.” From what I can see in the press release it’s not clear what that Last Call model is. I assume it’s Challenger-based, but perhaps we’ll get the Dodge Dart SRT4 the company teased and never built.

They should have done it during CES! Still sounds like a cool party.

The Future Of Cars Is Fewer Chips

The average new car has more than 1,000 semiconductors (or chips), with some featuring as many as 3,000 of them. This adds power requirements, cost, and complexity to the creation of a modern automobile. This complexity has resulted in a massive decline in car production and feature offerings due to the global chip shortage.

Chipmaker Qualcomm’s solution? The Snapdragon Ride Flex SoC (System-on-Chip) product family. Basically, Ride Flex SoC aims to combine a bunch of major features into one chip. You can read their press release to see how excited they are about this.

That is a lot of acronyms and terms thrown together to basically say (I think) that a bunch of systems that once worked semi-independently of one another can be combined into one environment. Their graphic is actually quite helpful to see how all the disparate systems that fit together.

The Future Of Cars Is More Cars

The auto industry had another bad year. Even as things began to improve in the second half of 2022 it wasn’t enough. Here’s the first look at the scorecard from Reuters:

Inventory shortages, caused by surging material costs and persistent chip shortage, spilled into 2022, hobbling production at many automakers. Tight supplies kept car and truck prices elevated, even as auto inventory improved in the second half of the year.

Hyundai-Kia were the biggest winner as the company was able to get cars delivered faster than pretty much everyone else at a time when its product portfolio is as good, or better, than most of the competition. The biggest hit by global shortages were the Japanese automakers, with Toyota likely losing its sales crown to GM this year.

Car companies will keep reporting sales throughout the week and we’ll keep updating as we have the info.

The Future Of Cars Is Autonomous Trucking

This isn’t explicitly a CES story, but it fits in nicely with the theme. According to Reuters sources, Microsoft is going to invest in autonomous trucking startup Gatik.

Microsoft plans to invest over $10 million in a financing round that values Gatik at more than $700 million, the sources added. As part of the deal, Gatik will use Microsoft’s cloud and edge computing platform Azure in developing autonomous delivery technology for trucks.

Ford and VW bailing on Argo AI hasn’t slowed down Microsoft, which also invested in GM’s Cruise. Something autonomous is coming and Microsoft wants a piece of it. Trucking is also the environment where this makes the most sense and Gatik is focused on the “middle mile” of B2B.

Howdy! I'm the Publisher of The Autopian which means I'm to blame for at least a small part of this. I used to run another car site and then made movies and TV shows. Now I'm here to convince you to buy a Peugeot.
Read All My Posts »
PrevPreviousSun-Baked Fords Of Few Miles: 1994 Mercury Topaz vs 1993 Ford Taurus
NextThe Volkswagen ID.7 Electric Sedan Promises Tesla-Beating Range And A Fix For VW’s Infotainment DisasterNext