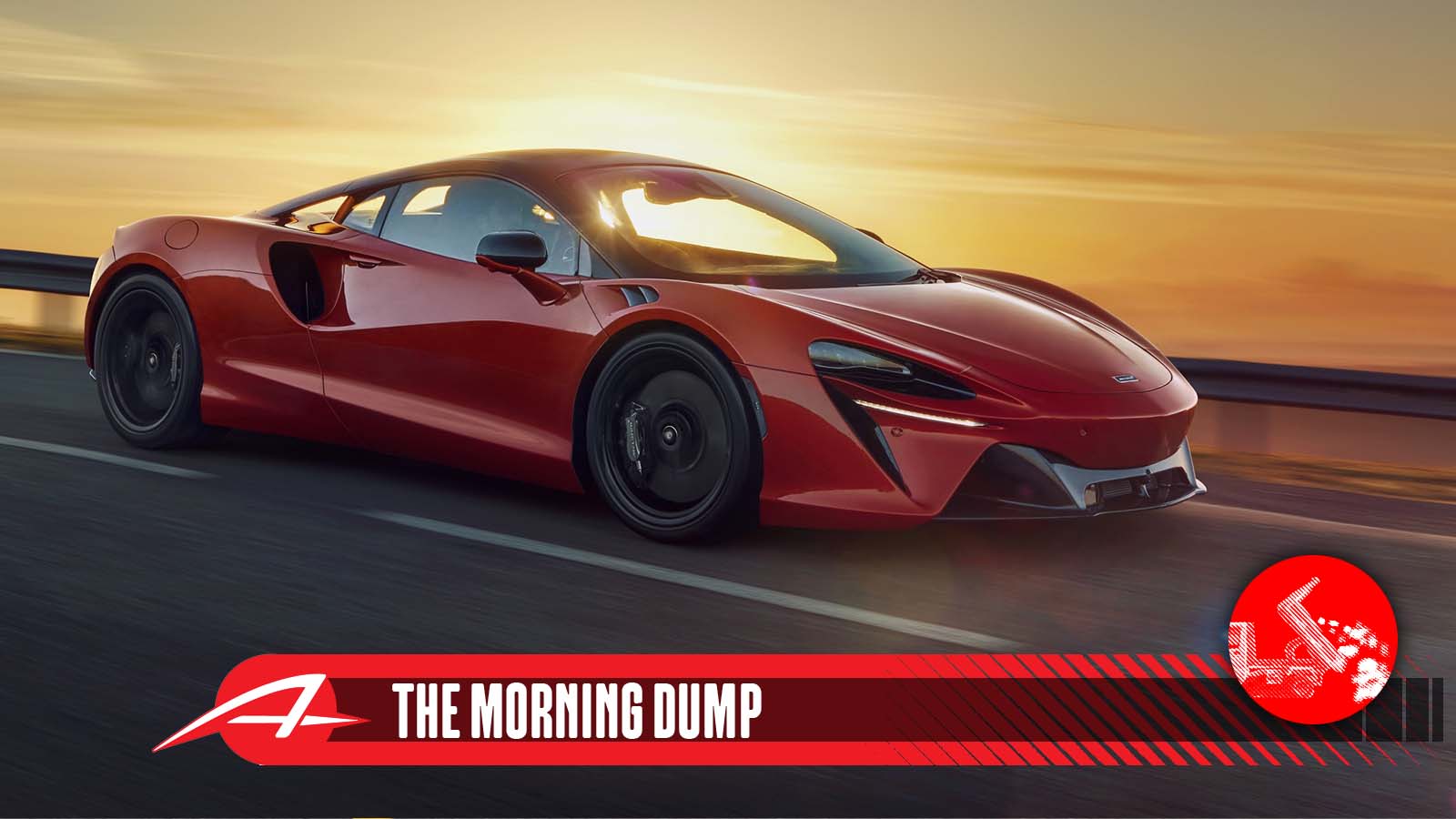 On this Christmas Eve Eve news dump we’ve got CEOs toasting, McLarens for roasting, and Stellantis’ hydrogen plans on the go. We’ve got scary quiet hybrid stories and tales of dumps long, long ago.

I’m cautiously excited about the McLaren Artura, which is the supercar company’s attempt at hybridizing its volume-selling, entry-point supercar. The Artura pairs McLaren’s brand new twin-turbo V6 with an also-new electric motor to create a 671 horsepower beast. The problem McLaren’s been having with the car is that it’s been turning into roast beast.

During the June launch of the car this summer there were some “thermal incidents” that resulted in auto journalists around the world begging their friends for photos. Road & Track refers to at least one fire from the launch, as well as technical glitches, in a wrap-up of the event.

Now the National Highway Traffic Safety Administration (NHTSA) has announced a recall for the Artura. Here’s the meat of the recall report:

“The cold formed nuts of the high-pressure fuel pipes can potentially loosen from the male threaded outlet connection of the gasoline direct injection fuel pump when subjected to vehicle loads, in particular during dynamic driving manoeuvres commonly associated with track running.

How did this happen? Also from the report:

The specification for the fuel injection system on the vehicle originally called for a fully machined nut to be used. However, during March 2021, the nut supplier notified McLaren of an imminent stock shortage of fully machined nuts and proposed a switch to cold formed nuts, which were already used widely by their other customers. The cold formed nuts had been successfully validated by the nut supplier and in durability testing performed by McLaren.

Let this be a lesson, kids, never trust a nut supplier who insists on a cold-formed nut when you’d already planned to use a machined nut. When in doubt, always used machined nuts.

Boy howdy, this sounds a lot like the incident that occurred at the launch in Spain. Let’s see what McLaren said at the time, from a Road & Track correspondent who was there:

McLaren said a supplier’s fuel-pipe nut had been torqued incorrectly, a one-off issue that was quickly identified and corrected.

Well, perhaps it was not quite a one-off. Let’s go back to the NHTSA report:

In June 2022, a vehicle with approximately 1000km of road use was driven on a race circuit, and a fuel leak occurred. Upon inspection, it was found that the cold formed nut of the left-hand high-pressure fuel pipe had loosened at the pump outlet connection. McLaren immediately commenced an investigation.

Either two cars caught on fire in June with this issue or NHTSA is describing the incident with journalists. But wait, there’s more! McLaren updated torquing procedures and, in September, the machined nuts came back into stock so McLaren switched back. Then the issue occurred again…

At the beginning of November 2022, a different vehicle with approximately 2800km of road use was driven on a race circuit by a McLaren professional driver, and a fuel leak occurred. Upon inspection, it was found that the cold formed nut of the left-hand high-pressure fuel pipe had loosened at the pump outlet connection.

What’s McLaren got to say about all this? They talked to Automotive News and said what you’d basically expect:

“McLaren takes safety and quality very seriously and has, therefore, chosen to launch a safety recall to replace a fuel-line nut on the McLaren Artura,” the automaker said in an emailed statement. “While the number of affected vehicles in customer ownership is relatively small, McLaren has acted in an abundance of caution in order to immediately eliminate any potential safety risk associated with this issue.”

There are very few Arturas in the hands of customers and, given the amount of testing abuse these cars go through, it doesn’t seem like a common issue. Ultimately, it’s great that the company intervened early and solved the problem before it became an issue for a customer.

It must be extra crappy given that McLaren’s been perpetually cash-starved over the last few years and dogged by some quality issues on earlier products. Clearly, McLaren needs the Artura to work.

Stellantis Is Serious About This Hydrogen Thing

I’ve already described hydrogen-powered cars as the industry trying to make fetch happen, but fetch seems to have momentum.

“Symbio’s technical roadmap perfectly matches with Stellantis’ hydrogen roll-out plans in Europe and in the U.S.,” said Stellantis CEO Carlos Tavares.  “This move will foster the speed of development to bring low emission products to our customers, beyond traditional electric vehicles. We’re grateful to the teams at Faurecia, Michelin and Symbio for their commitment to innovation, excellence, and collaboration as we all work to achieve decarbonized mobility.”

There are no details on the money involved or how much of the company will be left in the hands of French supplier Faurecia and tire company Michelin, which are Symbio’s current majority shareholders.

Canadian EVs Are Theoretically About To Get Louder

Both Europe and the United States require hybrids and electric cars to emit a noise to warn pedestrians of their presence in order to avoid a Dwight-v-Prius situation. You can read what NHTSA mandates here. Canada, for whatever reason, does not have the same mandate.

Now Canada is getting in on the action, according to this recent press release from the country’s Minister of Transport (the Honourable Omar Alghabra):

Under the new requirements, all hybrid and electric vehicles will now be required to have sound emitters that would produce noise at low speeds. Automakers can determine the type of sound the vehicle makes, but the volume and pitch must allow a road user to hear if a vehicle is speeding up or slowing down.

While many automakers have voluntarily added sound emitters to hybrid and electric vehicles, Transport Canada’s new requirement makes it mandatory equipment on all new light-duty passenger vehicles sold in Canada.

This makes sense, but I’m scratching my head trying to think of an electric vehicle for sale that does not already have this capability right out of the box.

A survey by Automotive News and corporate governance advisor company Equilar shows how delightfully remunerative it is to be a CEO in the automotive industry. Here’s the highlight that stands out to me:

For CEOs who have been in their positions for at least two years, median compensation rose 90 percent from 2020, said Courtney Yu, Equilar’s director of research.

Not bad. Not bad at all. The stock market is one of the biggest drivers of this growth, which makes sense when comparing 2022 and 2020:

Musk is at the top with $23 billion (all stock), followed by NVIDIA’s Jen-Hsun Huang at $560 million. The most shocking one here is Lucid’s Peter Rawlinson but, again, a big chunk of his compensation bump this year came from stocks.

Would you buy an Artura? If you had supercar money and were in that space is the McLaren on your list? Maybe a 911 GT3? What are you getting? Dream a little.

Howdy! I'm the Publisher of The Autopian which means I'm to blame for at least a small part of this. I used to run another car site and then made movies and TV shows. Now I'm here to convince you to buy a Peugeot.
Read All My Posts »
PrevPreviousReplacement Horses: 2000 Ford Mustang vs 1991 Ford Probe
NextThere Was Once An Airline That Ditched Human Passengers For PetsNext