Lucid Gets A Big $915 Million Boost From The Saudis 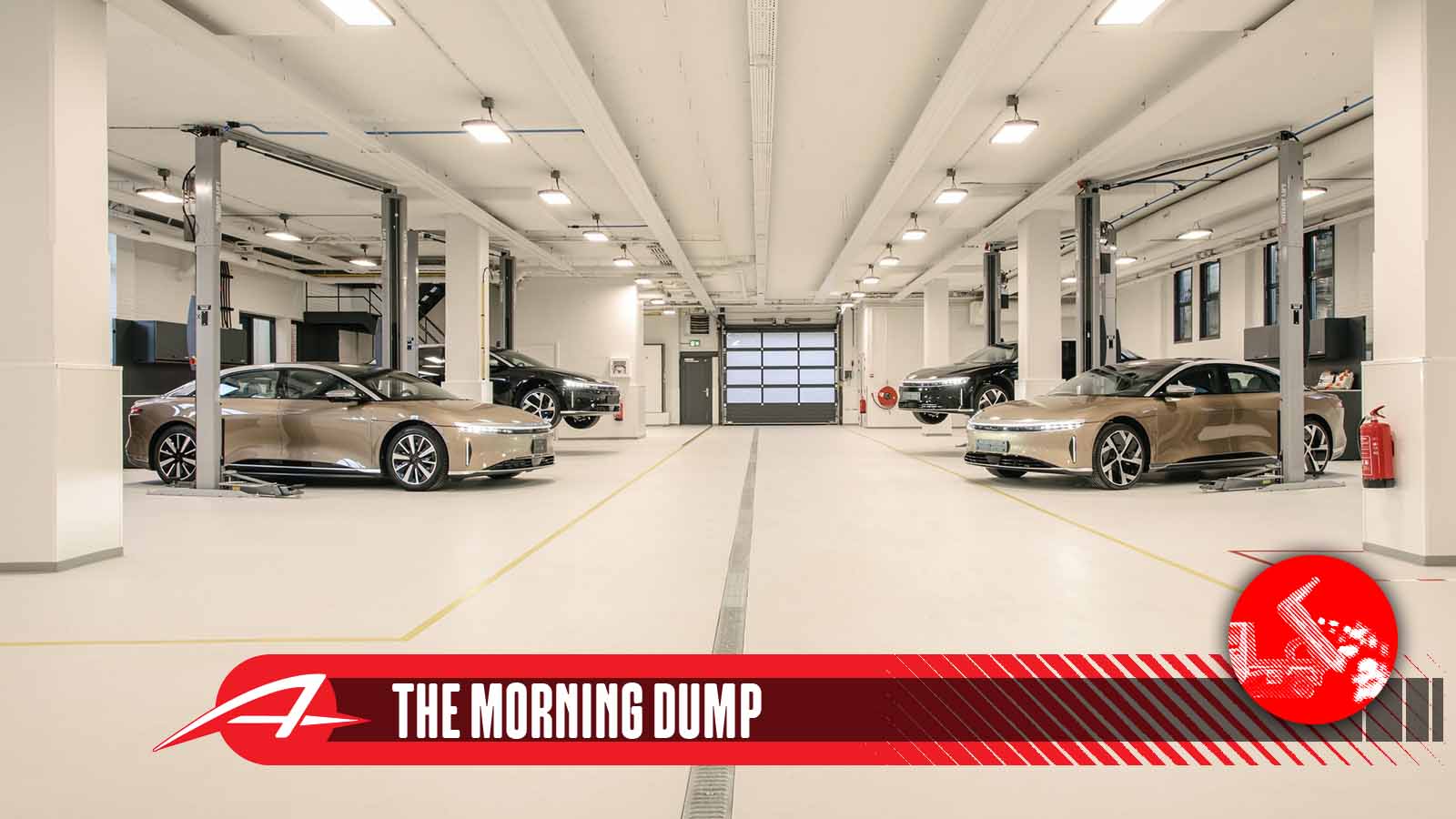 Lucid has that Saudi money, Brits are rocking out to Christmas songs about New York on the road trips, the Feds kick the can down the road, and the Takata death toll rises.

Lucid Gets Liquidity, Which I Shall Call Luquidity

It’s a truism of building cars that the first car a company makes costs a $1 billion (or $400 million, or whatever), and the company slowly keeps making and selling until all the money it gets for selling the cars finally surpasses the cost of developing and building them, and then the company reaches profitability. That’s a little oversimplified, but you get the point. For a massive car company it’s not a big deal because massive car companies don’t build one car at a time. For smaller companies it can create a cash crunch.

American electric automaker Lucid has cleared the first few hurdles to be coming a real automaker, and you can see the company’s cars on the road. Still, Lucid is losing hundreds of millions of dollars every quarter, and to turn that around it has to ramp up production of the quite interesting Lucid Gravity.

What Lucid needs is cash, and it just announced a successful $1.5 billion haul. The first $600 million came from selling 56.2 million common shares of the company at market prices (they’re listed on the NASDAQ). What about the rest?

The successful capital raise of approximately $1.515 billion, which includes approximately $915 million that Lucid expects to raise through the private placement of approximately 85.7 million shares to an affiliate of the Public Investment Fund (“PIF”), Ayar Third Investment Company (“Ayar”), pending settlement in December 2022, will be used, as previously disclosed, for general corporate purposes, which may include, among other things, capital expenditures and working capital. As previously disclosed, the price that Ayar is paying in the private placement equals the volume-weighted average price achieved in the “at-the-market” offering. This private placement is not a part of the “at-the-market” offering and is in addition thereto. Subject to certain exceptions, Ayar has agreed not to, among other things, offer, sell, pledge or otherwise transfer any shares of our common stock for six months after the date of the private placement.

The Public Investment Fund is a great name. You see that and you might think: “It’s money, for the public!” And this is true, assuming you recognize that the public in this case represents the Saudi public, and that the money is actually controlled by the Saudi Royal Family. They already own a huge amount of Lucid, as well as Uber, and Electronic Arts. This deal seems to keep them roughly equal with where they were before the fundraise (about 62% of the company).

This is good news for Lucid and, probably, anyone who invested in Lucid, though the Bank of Japan is out here throwing bombs this morning so who really knows.

So, About That Manchin Story Yesterday

Remember that big story yesterday about West Virginia v. South Korea and Joe Manchin and all that mishegas about whether or not Ubers and rental cars qualify for federal EV tax credits? A key piece in that story is that we’d find out what happens when the Treasury Department announces guidance at the end of the year. What did the government do? What government does best: kick the can down the road.

From the Associated Press:

The U.S. Treasury Department on Monday said it will issue proposed guidance for the critical mineral and battery component requirements in March, effectively delaying those eligibility restrictions in the $7,500 tax credit for new electric vehicles.

Instead, Treasury said it will release information before the end of the year that will outline the “anticipated direction” of the critical mineral and battery component requirements that new EVs must meet to qualify. The information also will help automakers “prepare to be able to identify vehicles eligible for the tax credit when the new requirements go into effect,” the department said.

Hahahahahaha. Technically, this means that the tax credit continues until March, I guess?

As has been well-established, I’m a big fan of Skoda. I try to read all of the Skoda news. I don’t share all the Skoda news because I understand that this fascination of mine is perhaps limited only to me. A release from Skoda this morning caught my eye, though not for the reason one might expect.

Most of the release is dedicated to “research” Skoda did that found out 23% of drivers in the UK are going to reduce their mileage because everything is expensive now after they catapulted themselves out of Europe and trashed their economy… because reasons.

What caught my eye was the song chosen as the most popular one for Christmas road trips.

Regardless of where Christmas is spent, and no matter the amount of time spent in the car this festive period, ŠKODA research has also revealed what’s on the top of the Christmas driving song playlist for journeys to visit family and friends.

The results speak for themselves, with a clear winner, the Fairytale of New York with 26% of the vote. In second place was Driving Home for Christmas by Chris Rea with 23% and third place went to Last Christmas by Wham! with 20%.

The ŠKODA UK Christmas driving playlist, ranked according to popularity, is as follows:

Wait, really? It’s a good song! I live in New York and you sometimes hear it on the radio, but it’s not a popular song. More of a novelty.

It turns out the Brits actually love this song. This isn’t some Skoda weirdness. There’s a whole Billboard article on the phenomena. It’s amazing to me that the most popular holiday song in the United Kingdom is about a Christmas in New York (and a pretty rough one at that).

If You Have A Takata Airbag You Gotta Get That Fixed

The Takata airbag recall crisis occurred before this site existed, but the repercussions continue to be felt. The faulty airbags contain a chemical called ammonium nitrate to inflate the devices in the case of an accident. In warm and humid environments the chemicals can become more volatile and, instead of gently [Ed note: I dunno about “gently.” This is an airbag, here. -DT] filling the bag to protect a car’s passenger in an accident, it instead sends metal shrapnel into the cabin.

In spite of all the work done to recall vehicles with these airbags, many cars have not had their airbags replaced under the free recall. According to the Associated Press, another death has been linked to the exploding airbags in a Steallantis vehicle.

Stellantis announced two deaths in November caused by the air bags and said it suspected the inflators caused another. The company formerly known as Fiat Chrysler confirmed the third death early Monday.

Since 2009, the exploding air bags have killed at least 33 people worldwide, including 24 in the United States.

All three deaths this year were in warm-weather U.S. states and happened since April, the company said.

A recall is no fun, but I brought in one of my vehicles for the Takata recall a few years ago and it wasn’t a long procedure. It was certainly better than getting in an accident and having my airbag grenade into my face.

What are your favorite holiday songs? The off-key Michael Caine “Thankful Heart” from “A Muppet Christmas Carol” gets me every time.

Howdy! I'm the Publisher of The Autopian which means I'm to blame for at least a small part of this. I used to run another car site and then made movies and TV shows. Now I'm here to convince you to buy a Peugeot.
Read All My Posts »
PrevPreviousVirtue Amongst Sin: 2004 Chrysler PT Cruiser vs 2001 Toyota Echo
NextHow A Corvette LS3 V8 Turns The Already-Sketchy Land Rover Defender Into A Lovable MonsterNext