Flying with your beloved pet can be a real hassle. Every airline has a different policy on what kinds of pets can fly, how large those pets could be, and where they could be on a plane. And sometimes, pets don’t survive the flight to their destination. Just over a decade ago, a new airline launched to solve all of that. Pet Airways ditched human passengers for just pets, and in some ways, the pets were treated better than some airlines treat humans.

[Ed Note: Many of the employees at The Autopian are quite thrifty and tend to take extremely cheap flights from sketchy airlines, so their views on how poorly humans can be treated are quite well-informed. – MH]

This week, my wife and I escaped the cold and miserable land of Illinois for some business and fun under the sun in California. Before our departure, we wondered if we could bring our adorable mini parrots with us. We found that the answer was “it depends.” Each airline has its own policy on how it handles pets, and some are better than others. We flew in with Frontier Airlines. And while Frontier nickels and dimes you for absolutely everything, including water, I do like its pet policy. Pets do not fly in the cargo hold. Instead, they fly in the cabin with you, provided that they’re small enough to fit into a travel container small enough to fit under your seat. And Frontier flies a variety of animals, including small birds!

For another example, American Airlines will fly a small dog or a small cat, but not something like a bird. A limited number of small animals can fly in the cabin, provided they could fit under your seat. Larger dogs and cats can fly, but they’ll have to fly American Airlines Cargo (but only if the pet is flying with an active member of the military, or with the State Department). As the name suggests, your pet will go into a cargo hold. This area is pressurized and climate-controlled like the cabin, but American Airlines has a long list of caveats from what planes animals can fly in, to allowable outside temperatures on the tarmac. The airline won’t fly pets to certain destinations at certain times of the year because of temperatures, too. Even if you’re lucky to get your pet in the cabin, there are additional limitations. For example: first class passengers are not able to bring pets on certain aircraft.

Aviation news site Simple Flying has outlined the labyrinth travelers have to go through just to figure out if Fido can go in the cabin, in the cargo hold, or has to be left at home with a sitter. And as Sheryl and I learned last year when we flew with a chihuahua, there are sometimes rules that the airline may not even publish on its site. American Airlines told us that if the dog became loud, the flight could divert.

Sadly, there are also rare occasions where pets don’t make it out of the other end of air travel in one piece. If you’ve ever thought about flying with your pet, you’ve probably read horrific news stories about animals dying in cargo holds or getting suffocated in overhead storage bins. Pets have died in cargo holds from heatstroke, other pets have died in holds by freezing, and others have seemingly died simply through the stress of the whole situation. Thankfully, America’s airlines collectively transport hundreds of thousands of animals each year, and there have been comparatively few deaths. As Insider reports, less than 0.01 percent of pets put into aircraft cargo holds are harmed each year.

That’s great! But since there’s a slim non-zero chance that something could go wrong, some are reluctant to fly their pets as cargo.

For Dan Wiesel and Alysa Binder, this whole stressful and confusing process was enough for them to open up an entire airline just to fly pets. Using some help from investors, Pet Airways was founded in 2005 before taking to the skies in 2009. And right from the jump, the airline’s goal was to flip the script on flying pets. A pet flying on the airline wouldn’t go into a hold, under a seat, or into an overhead bin. Instead, they would go into a massive kennel in the main cabin. That’s because this airline didn’t have human passengers at all, and instead, the animals were the passengers.

This theme went beyond just the cabin, as Pet Airways treated its “pawsengers” like a typical airline would treat a passenger. Pets got checked in for their flight at a pet lounge at the airport. There, the owner got wave off their beloved friend and the animal got some exercise and a bathroom break before boarding. During boarding, the pets would be wheeled out to a waiting plane with its air-conditioning running. Each 19-seat turboprop–at first operated by Suburban Air Freight–didn’t have seats.

Instead, each animal’s crate was loaded up into the cabin, turning into a large cube of adorable animals. Loaded, these planes carried 40 to 50 animals for a trip to one of Pet Airways’ 14 destinations. And their owners paid from $150 to more than $1,000 for their pet’s ticket, depending on the animal’s size. 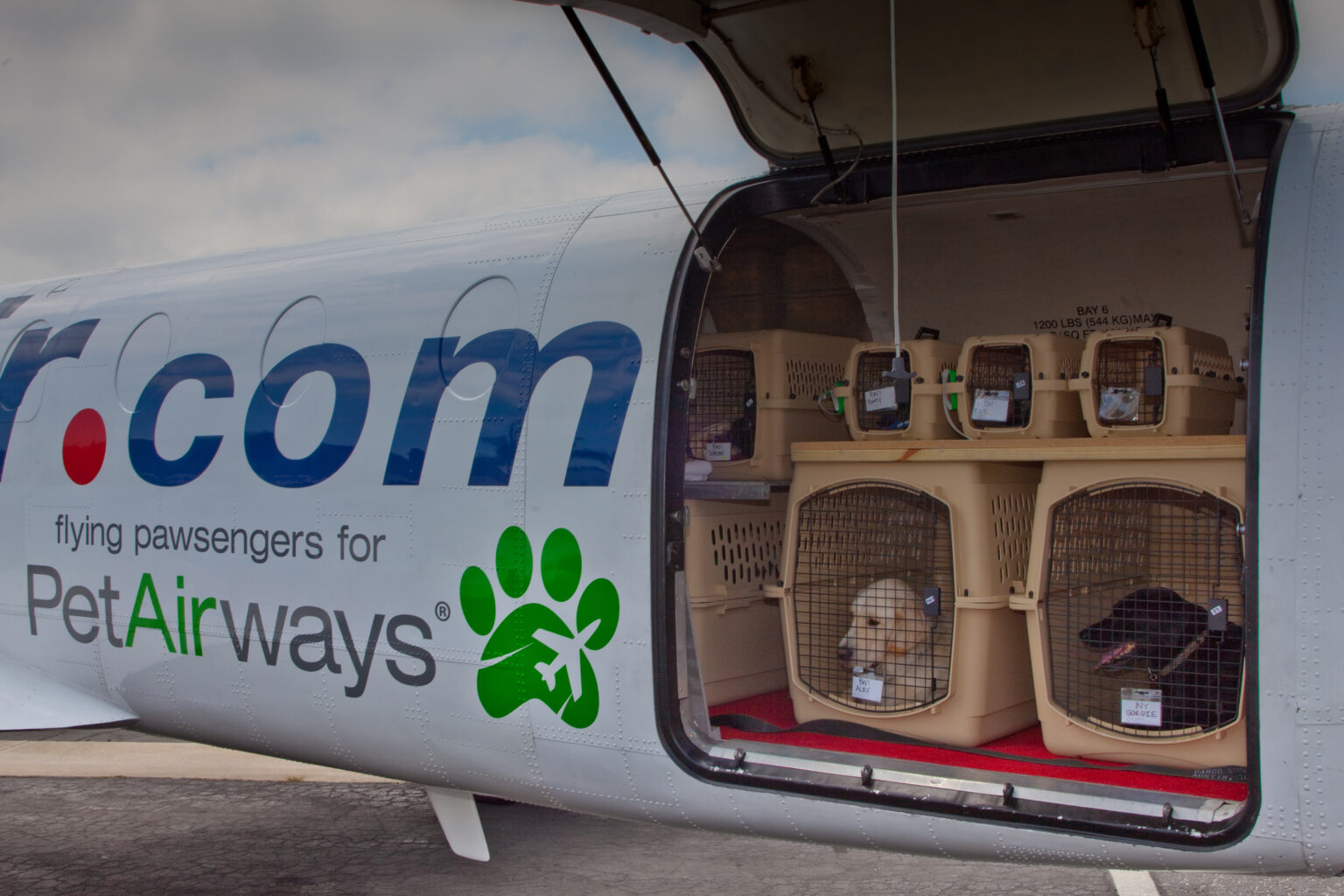 And it didn’t stop there. The flight crew consisted of the pilots and a trained attendant. This attendant checked on each animal every 15 minutes to make sure that they were comfortable. The lights were on in the plane’s cabin, so the animals got to look around and check out their surroundings. And unlike the pets flying in cargo holds, which rely on whatever is in their bowls, the Pet Attendant was able to provide food and water when necessary. If an emergency occurred, the Pet Attendant could order the captain to land the plane at the nearest airport so the animal could receive help. 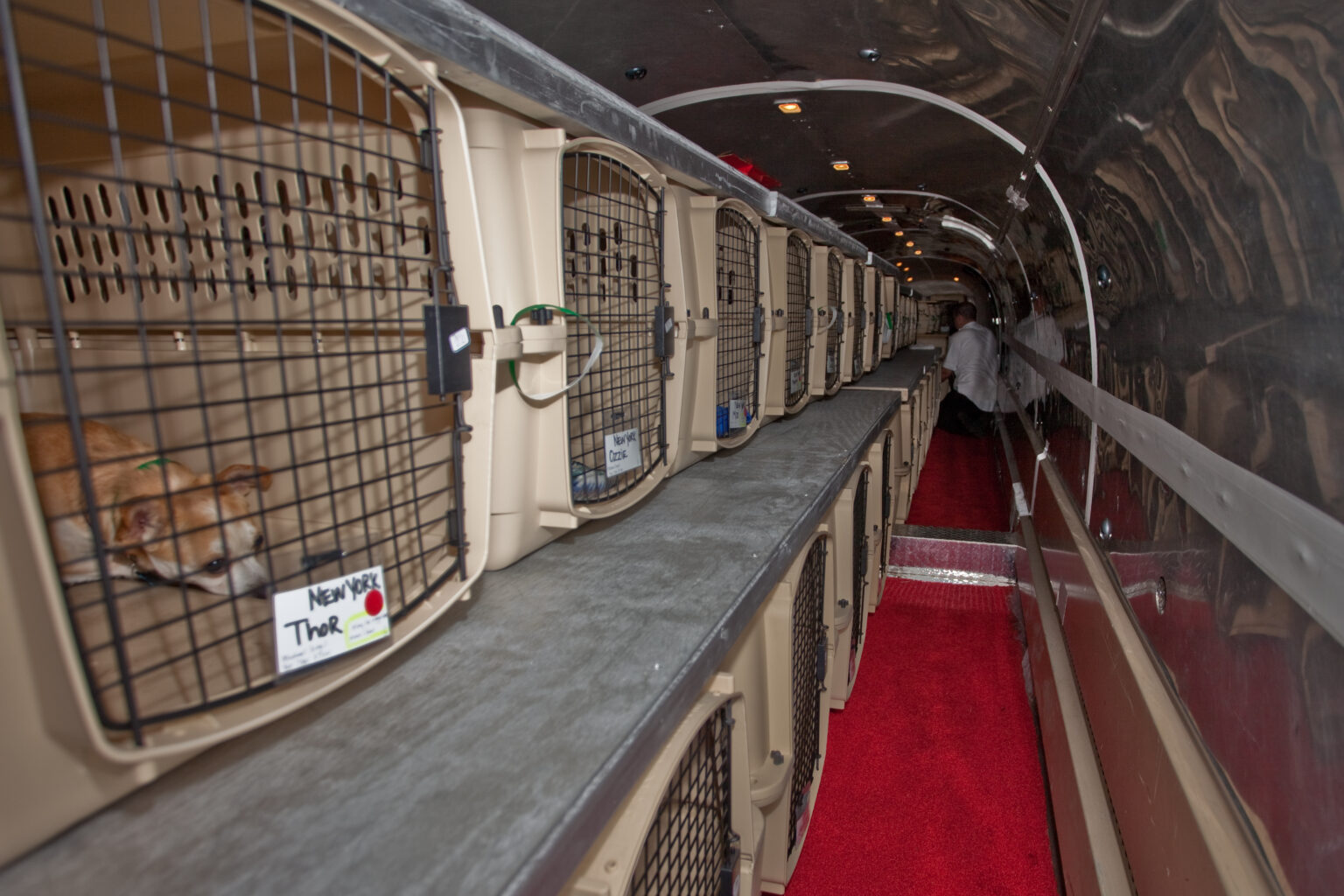 Pet Airways managed to get up in the sky for a whole two years. From 2009 to 2011, the airline flew some 9,000 animals. And they weren’t just cats and dogs, either, as the airline says it took on a bit of everything from parrots to a potbellied pig. And while 14 destinations isn’t a large number, the airline still managed to fly pets into smaller airports of major U.S. cities.

Unfortunately, while this airline drew in a number of happy customers, it never turned a profit. In a 2012 New York Times article, things looked bleak:

“We have experienced a history of losses and have yet to begin generating positive cash flows from operations and, as a result, our auditors have raised substantial doubt about our ability to continue as a going concern,” the company wrote in the February regulatory filing.

At the time, Pet Airways was still booking flights, even though it wasn’t flying planes. Thus, as the New York Times reported, customers and even the publication’s own journalist booked flights but ended up seeing the charges reversed. Pet Airways called itself the first airline of its kind but never had the cash to keep things going. 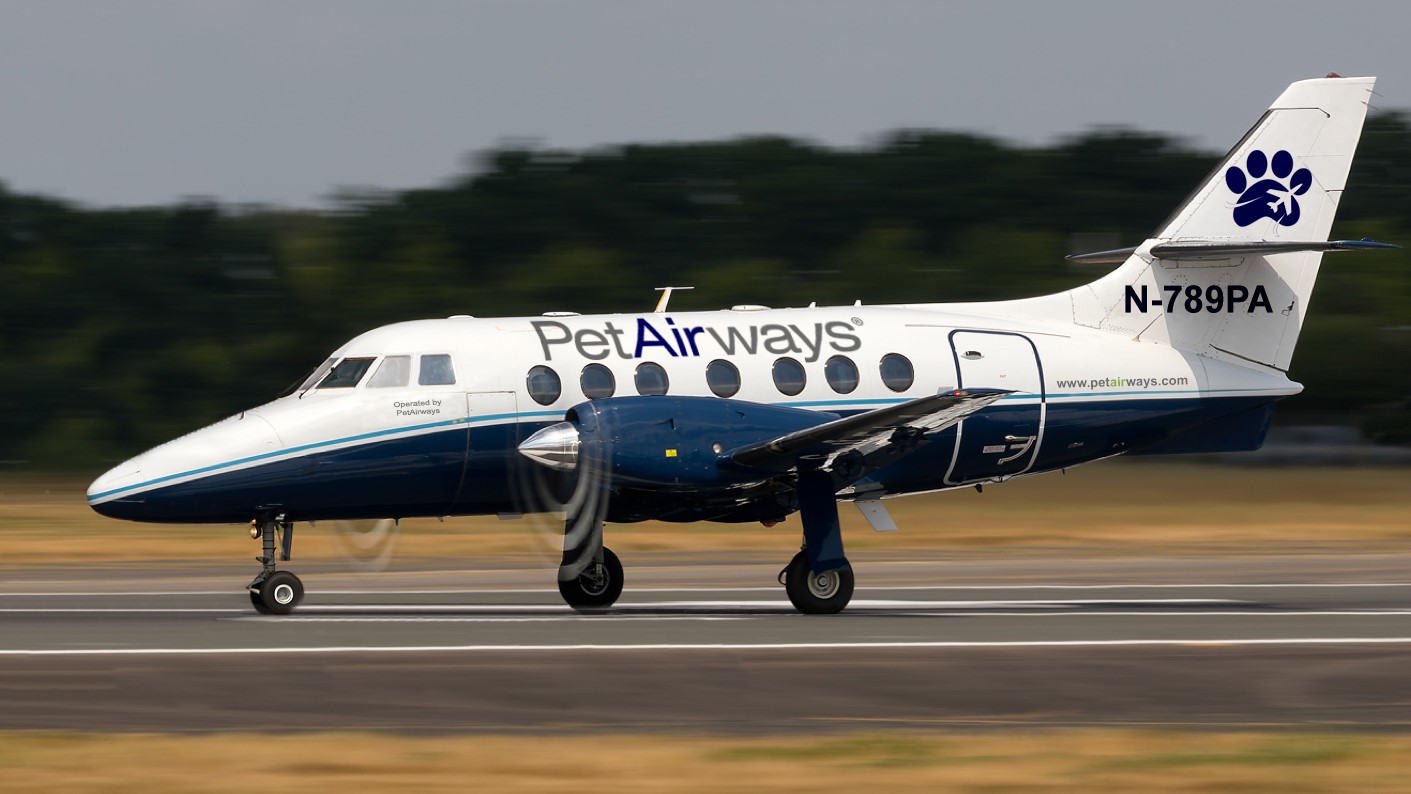 In the years since another airline for pets tried to revive the concept before it too fizzled out. People And Pets Dog Airlines was supposed to fly pets for hire, but that never happened. The airline’s Cessna 150 ended up being used for charity animal rescue flights before it vanished into airline history.

While the flights have ceased, Pet Airways has been looking for funding over the years with the intention of restarting. Even the airline’s website remains online. It’s unclear where the airline stands with that, but a message on its site states “Flights to Commence Post Covid, Hopefully Mid-2022.” The airline previously had a restart date of 2021. Given the statistics, I’m not sure something like this would be profitable, but I love that someone tried doing something a bit different with an airline concept.

Mercedes is a lifelong fan of all things powered by an engine. When she isn't driving one of her five Smart Fortwos or her 14 other vehicles she could be found in the cockpit of a Cessna 172 or perhaps swimming in any body of water that she could find. She also has a deep love for buses of all kinds. Please send her buses. mercedes@theautopian.com Instagram: @mistymotors Twitter: @Miss_Mercedes30 Facebook.com/neonspinnazz
Read All My Posts »
PrevPreviousMcLaren’s V6 Artura Already Recalled For Fire-Causing Loose Nuts
NextGran Turismo Is 25 Years Old Today: What Was Your Favorite Car?Next