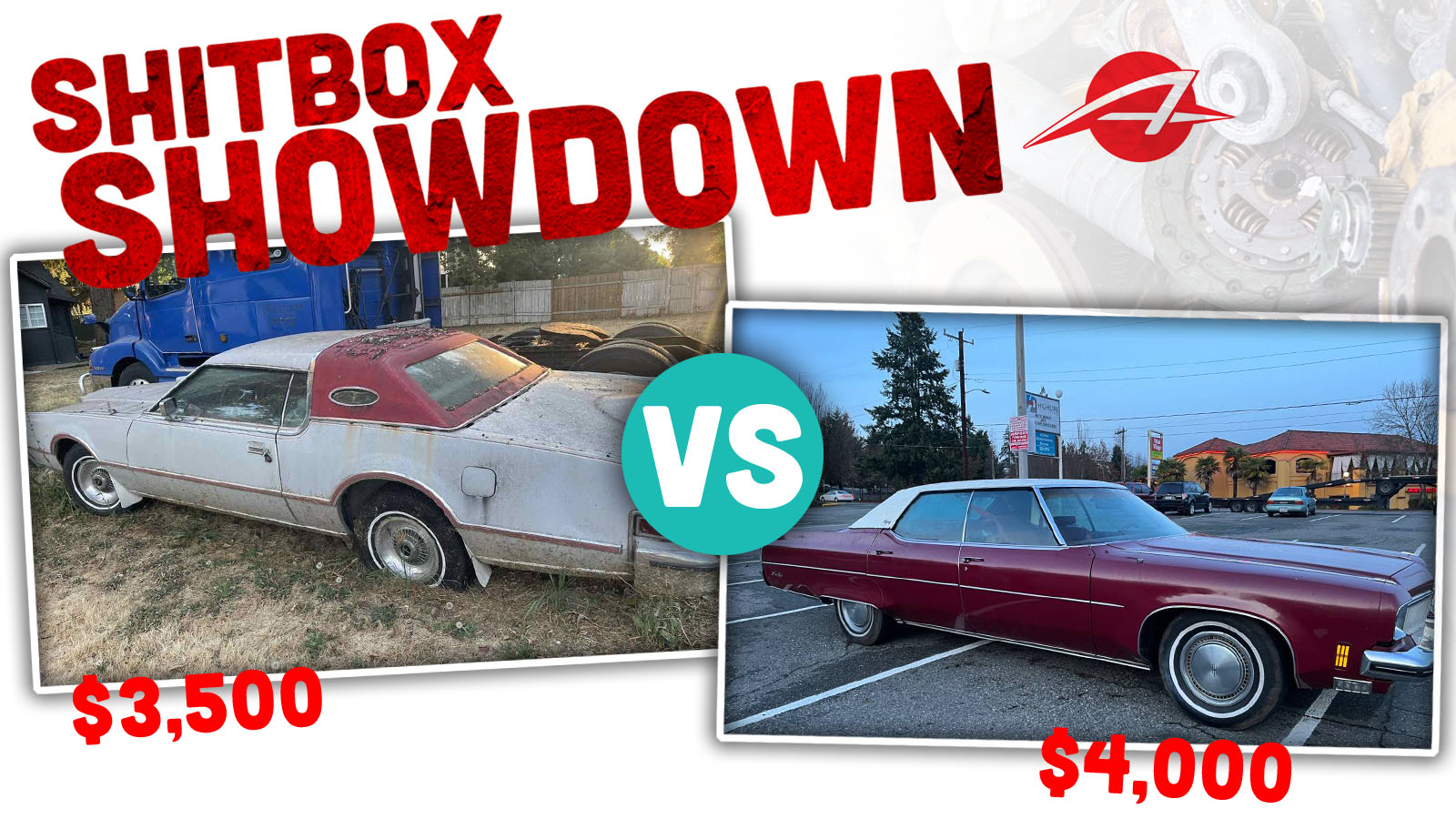 Good morning, and welcome back to Shitbox Showdown! Today we’re looking at a couple of old land yachts, both more or less ready to set sail. You’ll notice that both of these cars are over the old $2500 price cap; I kinda like Thomas’s interpretation of “shitbox” as being of any price, but terrible, so we’ll stick with that for a while and see where it leads us.

Before we get into that, I do have one other piece of old news to tell you about. I had an email conversation with a reader named Eric Hesse while I was out, regarding a car we featured way back in October: a Mazda GLC wagon. As it turns out, Eric and his wife were already on their way to California to buy the little Mazda when it appeared in the Showdown. They bought it, and–get this–drove it home from the Bay Area all the way to Wisconsin, by way of Sedona, Arizona.

Eric and his wife dropped the Mazda off at a mechanic before they hit the road just to make sure it was ready to rock. Even so, Eric says it developed carb problems along the way, and the heater went out before they even left California. They did the last leg, from Liberal, Kansas to Wausau, Wisconsin in one day, a distance of over 1000 miles. (“0/10, do not recommend,” says Eric.) He says there’s “something spiritual” about the little Mazda, and that the trip helped him figure out some things in his life. I understand completely; there’s something about a long road trip that sorts out all the psychic junk in your mind. It just goes to show that it doesn’t matter what you drive, where you drive, or how you drive–what matters, if you love cars, is that you drive. If you want to see more of this epic road trip, check out your_coach_katya on Instagram.

Yesterday wasn’t even a contest, and I knew that going in. Nobody in their right mind would tackle that Gremlin, but I felt like writing about a Gremlin, so there you go.

Easy win for the Saab, as expected. I’ll be watching that auction to see how it turns out, and I hope that little red Saab goes to a good home, because it’s a cool car.

Now then: Let’s take a look at a couple of Queens of the Brougham Age. Long, wide, cushy, and V8-powered is the order of the day. Let’s see what you make of them. 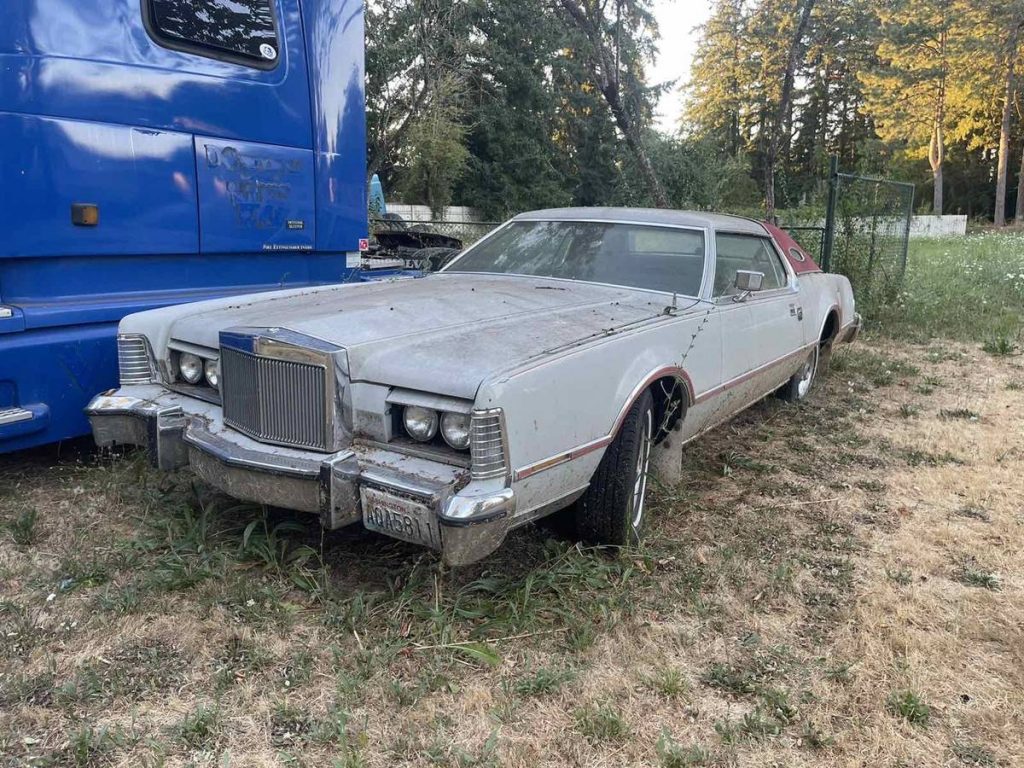 Runs/drives? Yes, but has been sitting for a couple of years

Presence. That’s the best word I can think of for these old Lincoln coupes; they take up a lot of space, and thus demand a lot of attention. But that was the point of them; you drove a Lincoln Continental because you wanted everyone to know you could afford a Lincoln Continental. And the likely single-digit fuel economy from the giant 7.5 liter V8 didn’t concern you, because again, you could afford it. 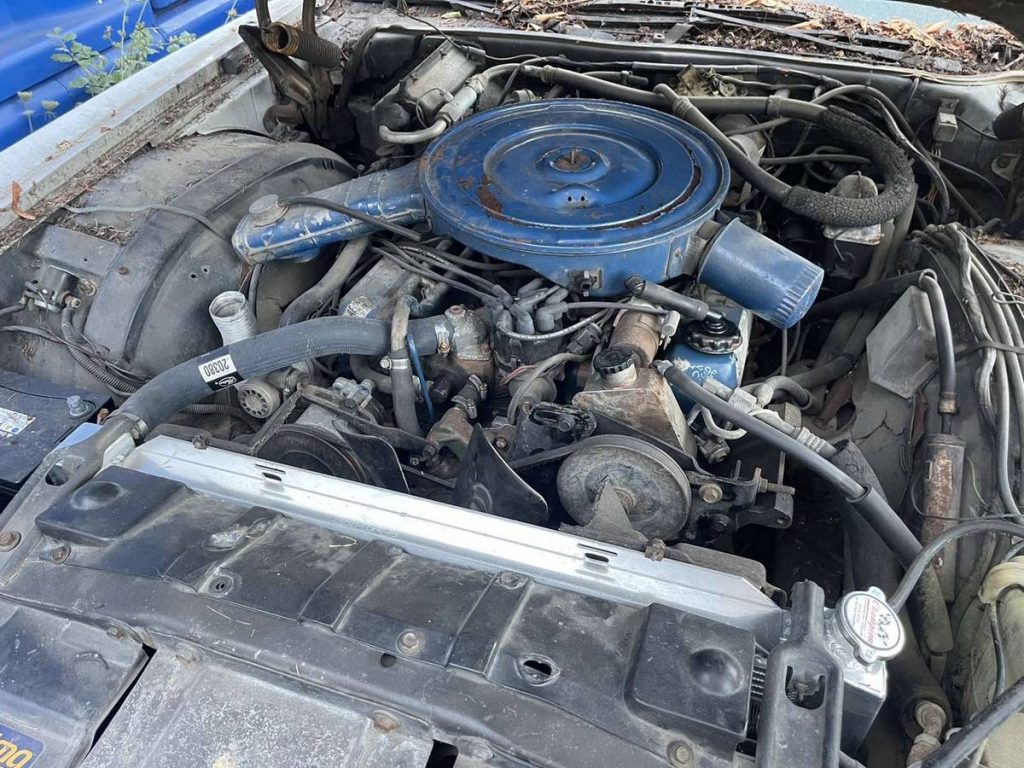 That massive engine doesn’t translate into much speed, especially by 1976, but the nearly bottomless well of torque available gives it a relentless, inexorable feel. You know it’s not fast, but you also know it’s not ever going to struggle. In the days before overdrive automatics, a common trick was to give a car a tall rear axle ratio to keep the revs down, which slows down acceleration even more, but makes highway cruising serene. If you’ve never experienced an older full-sized American car at 75 MPH on the Interstate, you’re missing out. 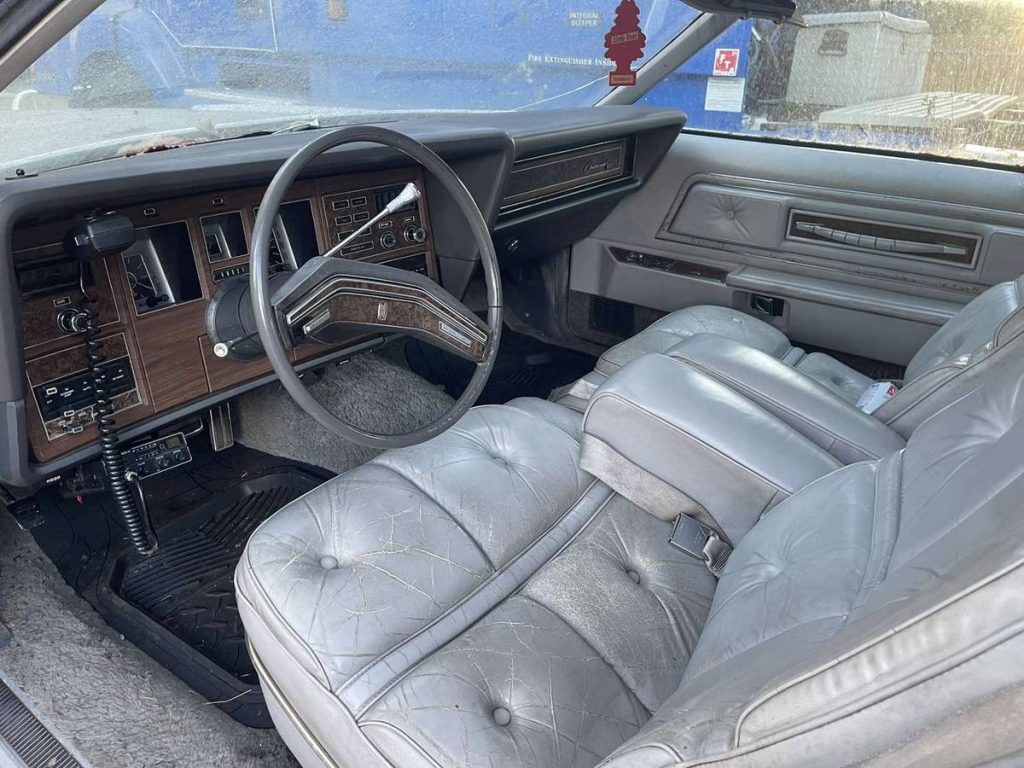 This old Continental needs a good cleaning, but it has only 55,000 miles on the clock, and the seller says the transmission was rebuilt shortly before it was parked two years ago. It will likely need some care to revive, but two years isn’t too long of a slumber. It’s hard to say how the paint will clean up, but the inside looks nice, and appears to have stayed dry while it was out of commission. 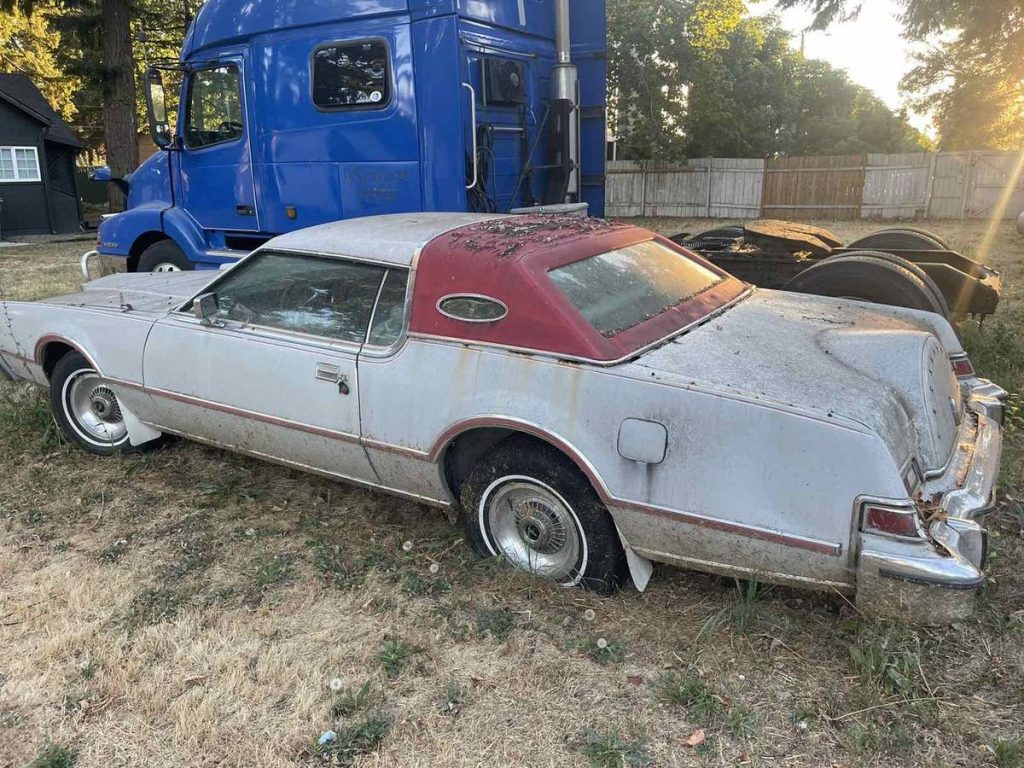 The vinyl landau top is shot, and there is some rust starting on the roof underneath it. But hey, none of us are as young as we once were. If it does indeed run and drive, and can heave itself out of that rut it’s sunk into, this might be a good car to fix up. Or just clean it up as well as you can, and float down the road as-is. 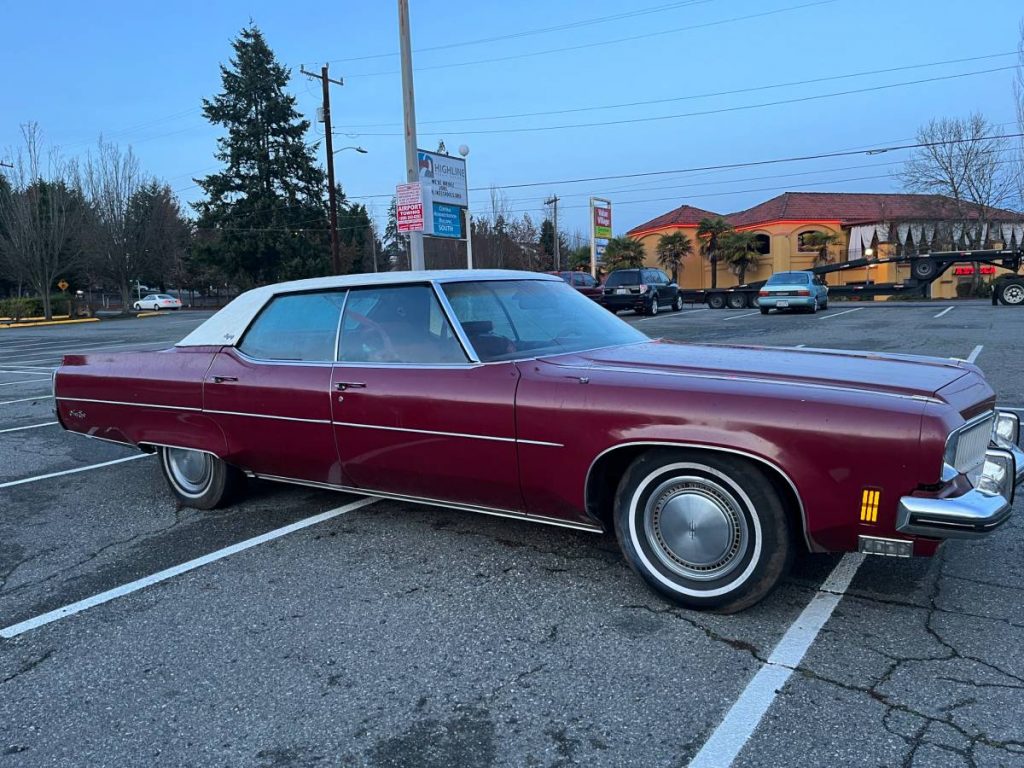 And in this corner, weighing in at a lot we have Oldsmobile’s flagship sedan, the Ninety-Eight Regency. This is a late example of a very cool bodystyle that no one makes any more, a four-door hardtop. There are no B-pillars above the doors; roll down all four windows, and there’s a massive expanse of open air along both sides of the car. I can tell you from experience that this makes for a very nice summertime cruiser with a bunch of friends. 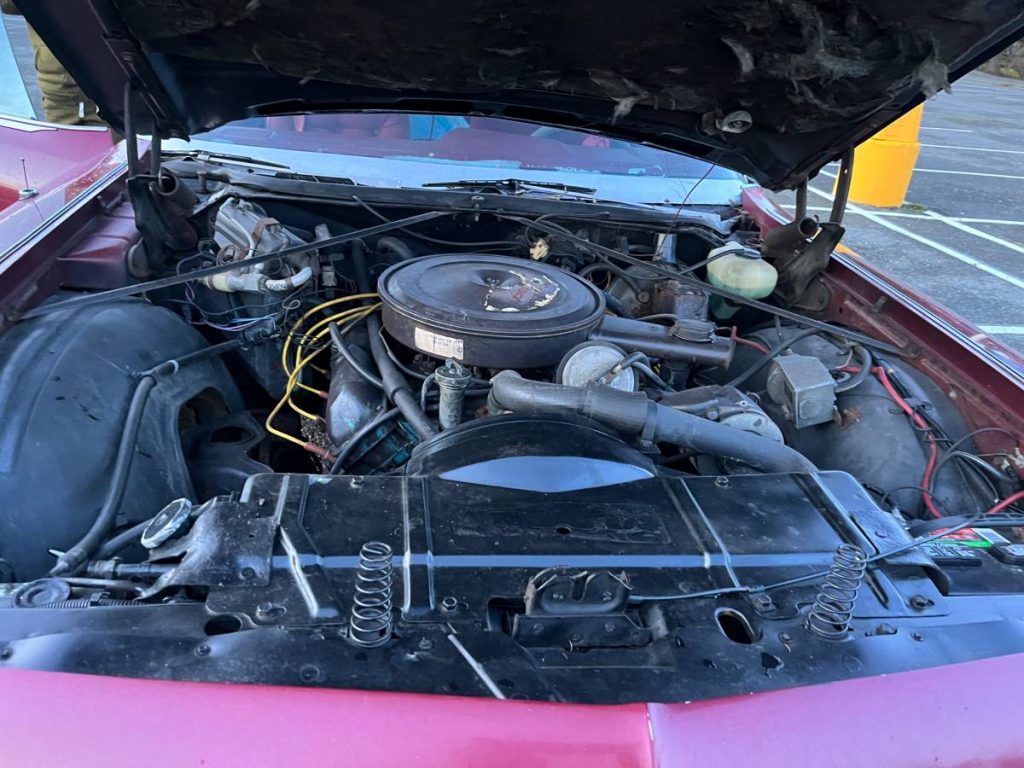 Powering this al-fresco living room on wheels is Oldsmobile’s legendary Rocket V8, here displacing 455 cubic inches, and not yet choked down by a catalytic converter. It’s not a fire-breather in this humongous car, but it’ll move the road ahead into the rearview mirror at a good clip, and suck down a whole oil field’s worth of regular every time you hit the passing gear. Again, it’s all about presence. 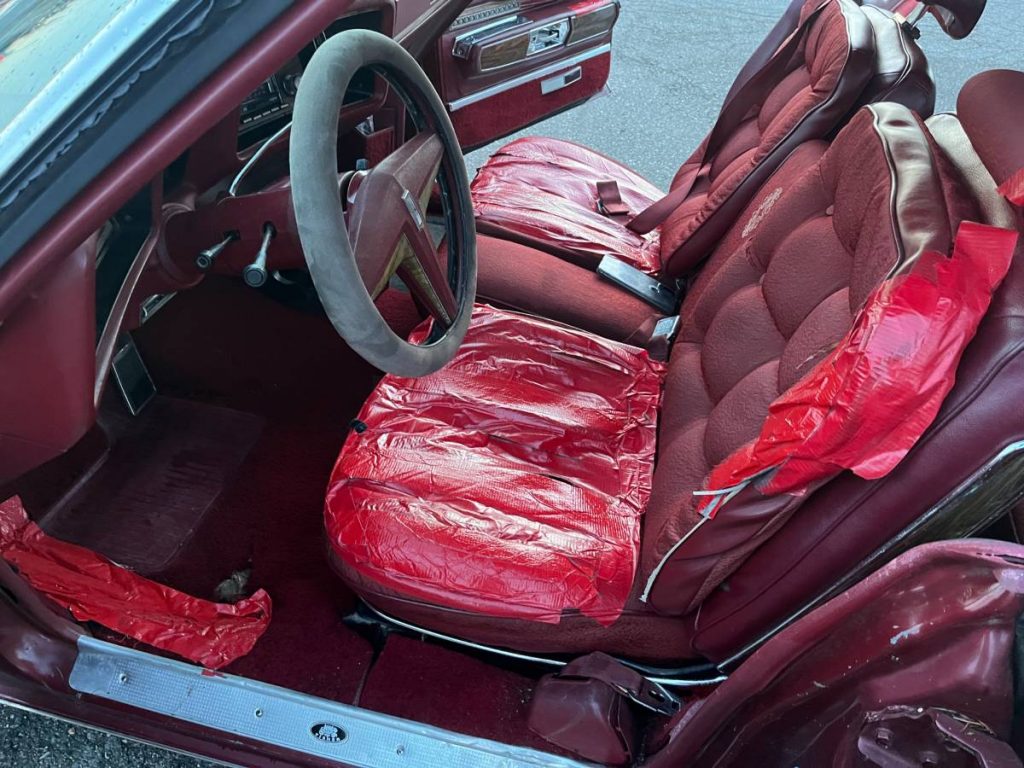 Inside, the comfy confines of this Oldsmobile could use a little help. The deeply-tufted upholstery has been patched with what looks like a whole roll of red duct tape, and a hole in the carpet appears to have been covered up as well. I can’t imagine that this was the best solution to whatever problems the seats had, but it’s there now, so the new owner will have to deal with it. The “handyman’s secret weapon” doesn’t affect the smoothness or quietness of the ride itself, luckily. 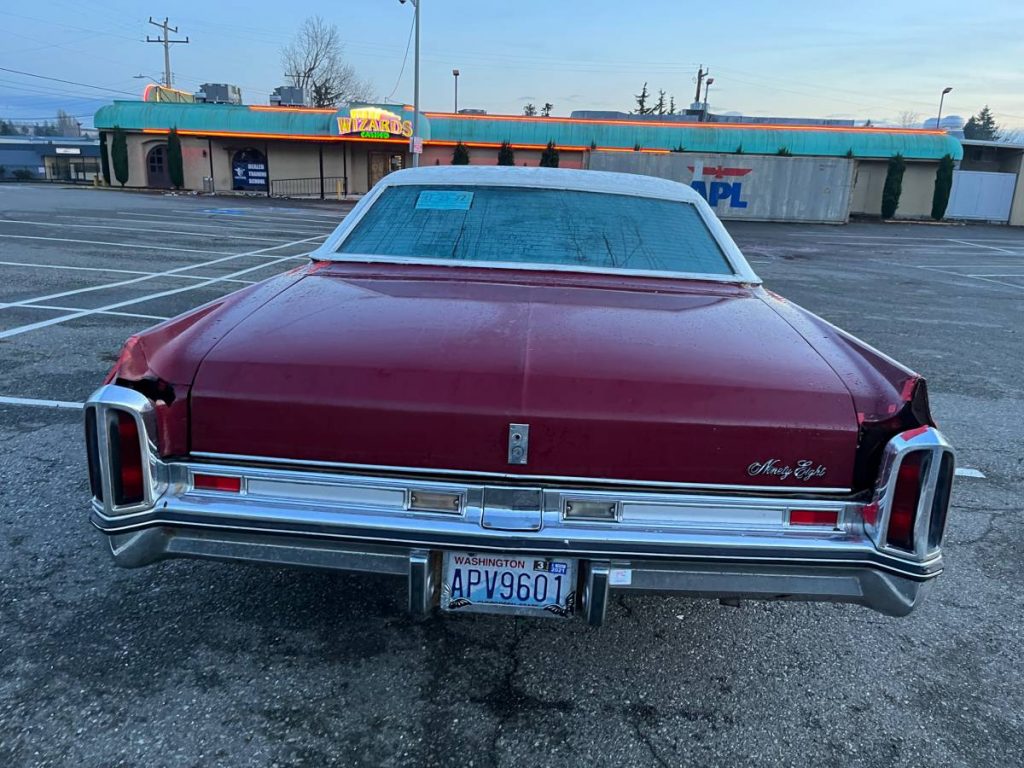 Obviously, this car isn’t a showpiece, but it is now rare enough that it’s a pretty good conversation piece. You might take up two spots at Cars & Coffee, but you’ll draw a crowd. Does that make up for its cosmetic shortcomings? You tell me.

So that’s what I have for you today: two large and in-charge barges from the Seventies. Which one of them is still relevant after all these years?