For your consideration this morning, we have a bit of a mashup — two vehicles for which I could not find comparable mates, at least in the time I had to look. So, as typically happens in these cases, I’m pitting them against each other. I suspect I know which one is going to win, but I’ve been wrong before. We’ll just have to see.

Yesterday, we looked at a couple of compact domestic pickups. Let’s see how they did:

So the Ranger legend lives on. Personally, I’d prefer the S-10, but I’m a Chevy guy, and I try to never be in a hurry, so a four-cylinder is fine with me. And I do love those wheels.

Now, on to today’s contestants: One is a Great Little Car in the ultimate bodystyle and color, and the other is a brilliant off-roader spoiled (some say) by a pair of rectangles. Do they have any business competing against each other? Is anyone going to cross-shop these two vehicles, ever? Of course not. But we’re going to look at them, and then you must choose one. It’s what we do. 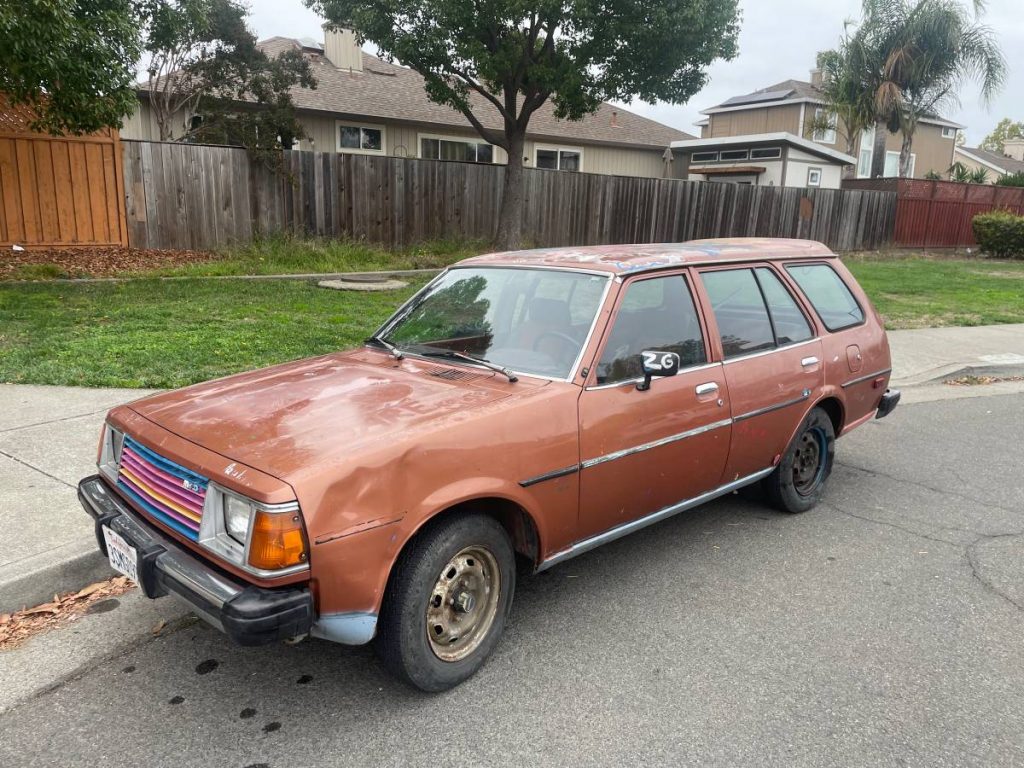 If you’re one of our younger readers, the Mazda GLC nameplate might not be Familia to you. (Get it? Because it’s known as the Familia in Japan… Oh never mind.) GLC stood – and I’m not making this up – for “Great Little Car.” This name lasted through two generations: this rear-wheel-drive version from 1977-1980, and a front-wheel-drive model from 1981-1985. The wagon, however, remained RWD after the FWD sedan and hatchback were introduced. 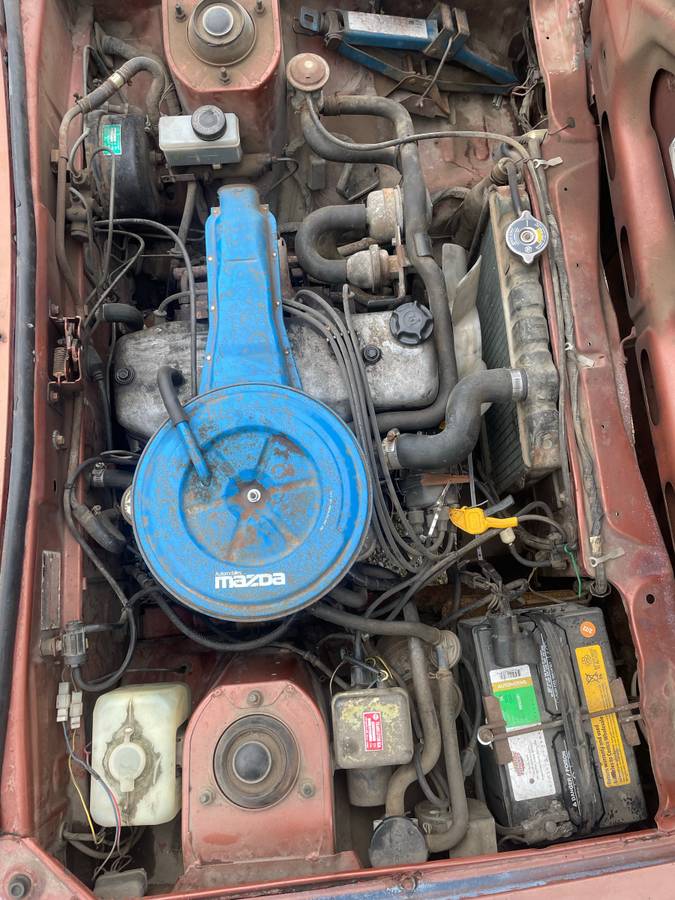 This generation of GLC is powered by a carbureted 1.4 liter four-cylinder engine, connected to a five-speed manual gearbox. I never understood why Mazda chose sky blue for their air filter assemblies in the ’70s, but it is distinctive. Not as distinctive as the multicolored grille someone chose to gift this car with, however. 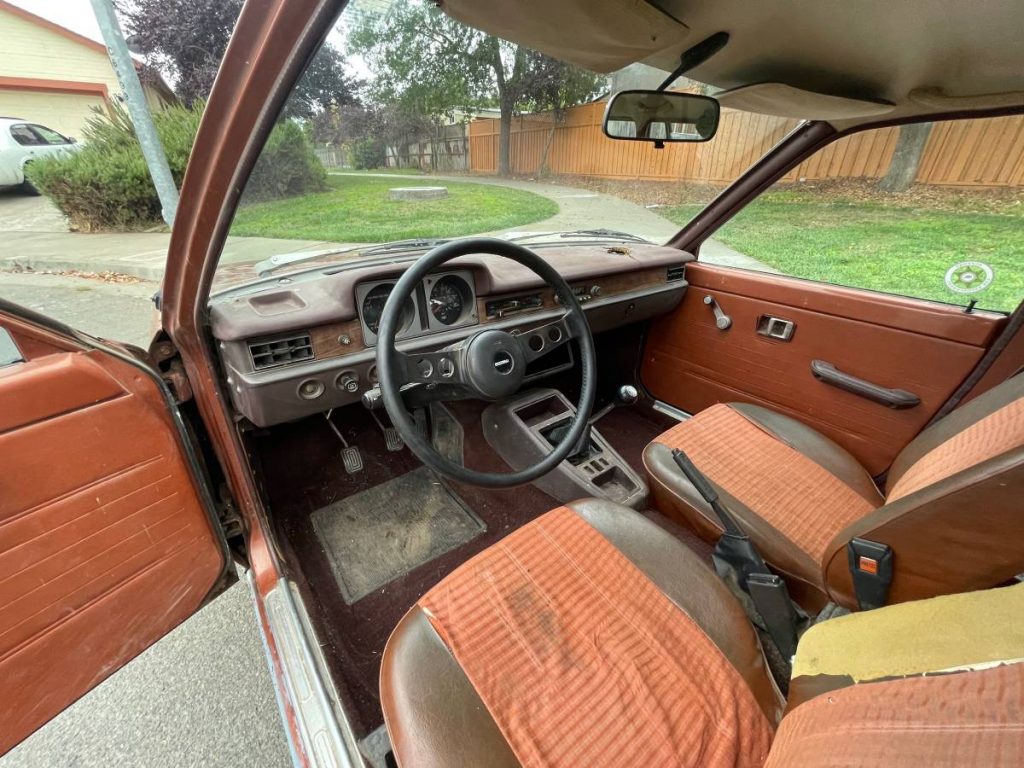 This little wagon is a rare sight these days, even in sunny California, and even rarer with only 100,000 miles. For all I know, it might be the lowest-mileage GLC left. It’s not in great condition for that few miles, with dings and dents outside, and a heavily-worn driver’s seat inside. The seller says it runs and drives great, but it has been on non-op status for an undisclosed length of time, so a careful examination is in order. 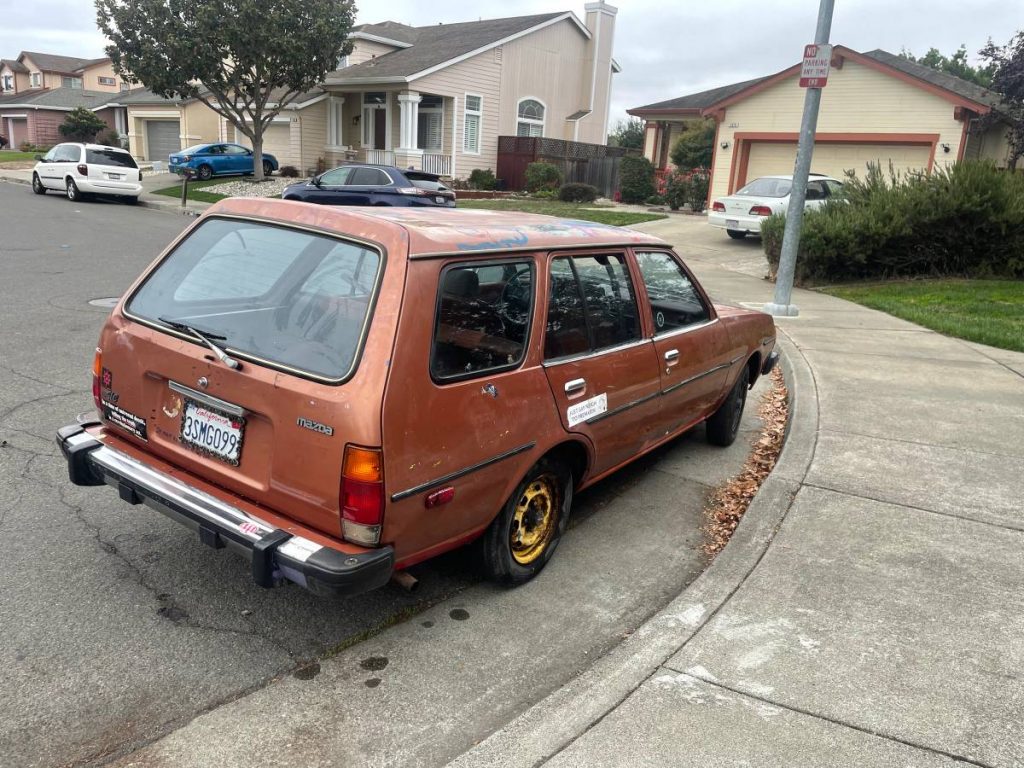 But hey, it is the fabled brown manual station wagon we’re all accused of loving so much! And it’s certainly cheap enough. A little elbow grease, some new soft parts, and you could be living the dream. 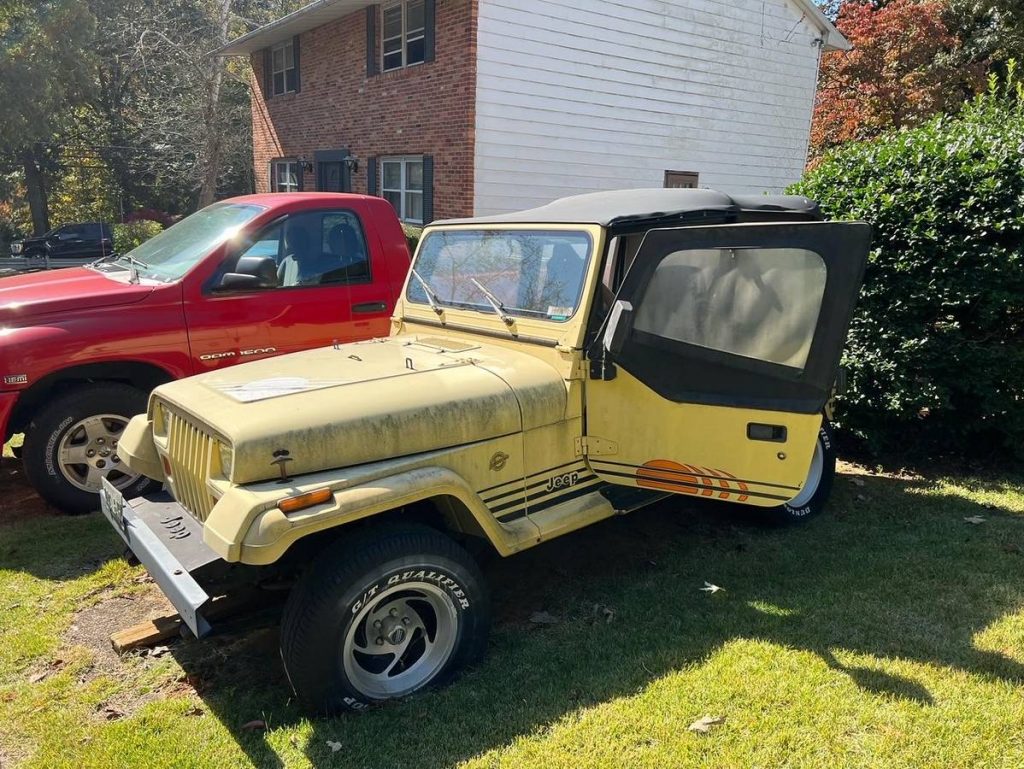 Runs/drives? We don’t know that either…

I fully expect this Jeep to be sold by the time you all get a chance to read this, so I’m going to do something I never do: post a screen shot of the ad for posterity: 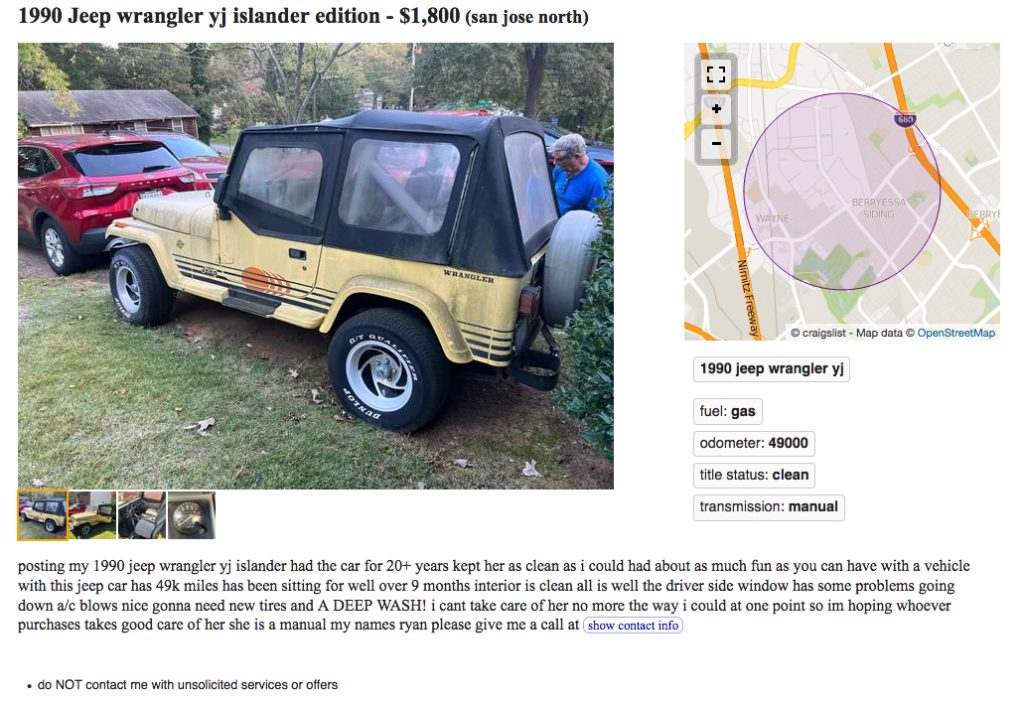 Ordinarily, I would have passed right over an ad like this: missing information and not many photos makes for a difficult write-up. But how often do you find a YJ Wrangler for under two grand? I’d suspect it of being a scam, except the seller sounds so earnest. I think this might be a case of the seller truly not knowing what they have. [Ed note: I need this. -DT] 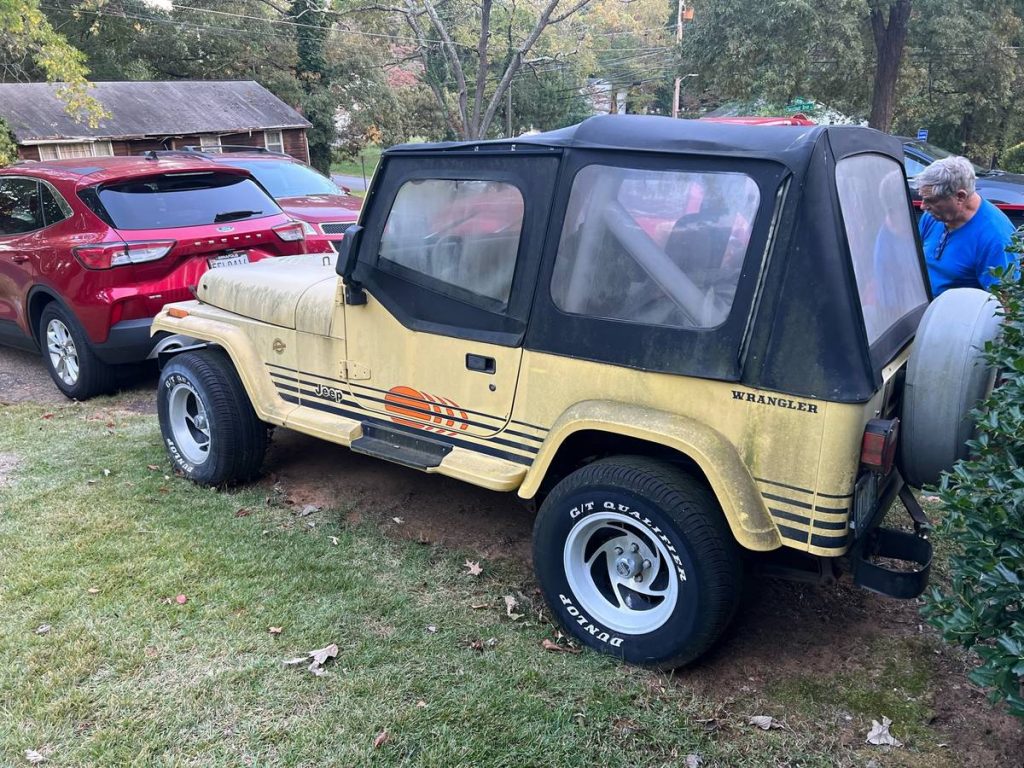 The Jeep YJ Wrangler, which our illustrious editor-in-chief recently wrote about, is a bit of a polarizing vehicle among Jeep fans. One one hand, it’s the last Jeep with leaf-spring suspension all around, which in a way makes it feel more “Jeepy” than later Jeeps with coil springs. But on the other hand, it replaced the CJ5/6/7/8’s friendly round-headlight face with a squared-off, angled-back grille with rectangular headlights that don’t sit right with a lot of people. 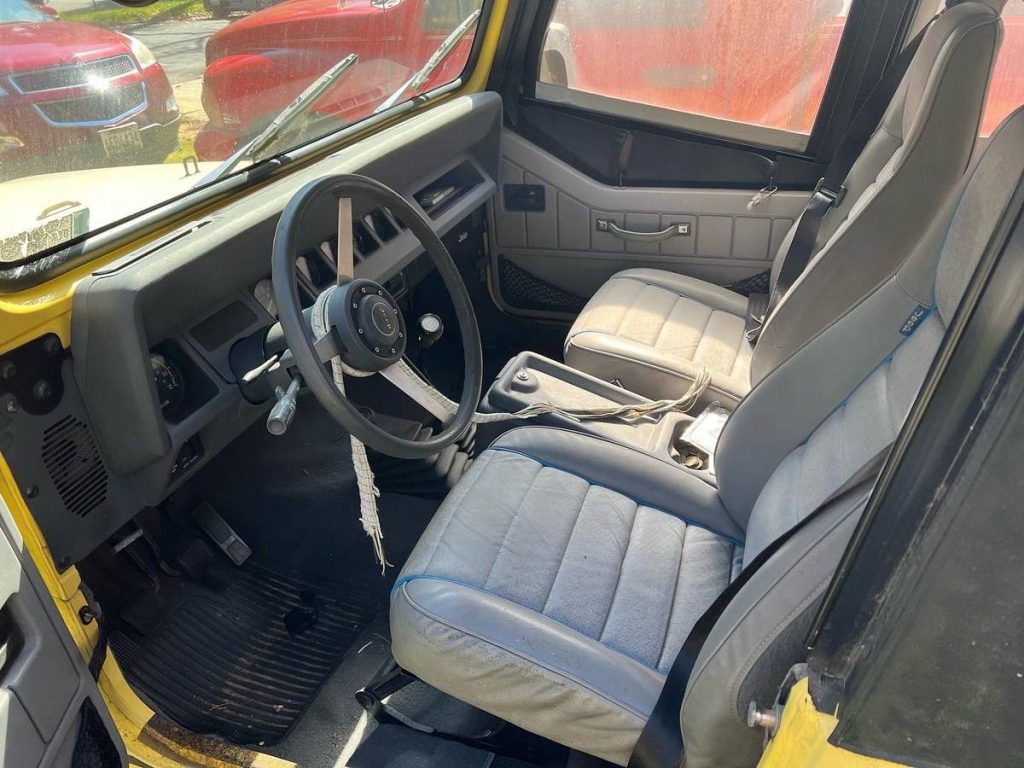 Personally, I think the YJ is cool, and this is coming from someone who learned to drive in a CJ8. I’ve driven a couple of YJ Wranglers (on-road), and I don’t think the “Yuppie Jeep” nickname applies at all. This is still a real Jeep, with real engine and road noise bombarding you, and gives you a real jolt to the spine over bumps. There’s no indication in the ad what engine is under the hood of this one, but from what I understand, it’s either a 2.5 liter four or AMC’s good old 4.2 liter inline six. (The 4.0 six became available in the Wrangler the following year.) 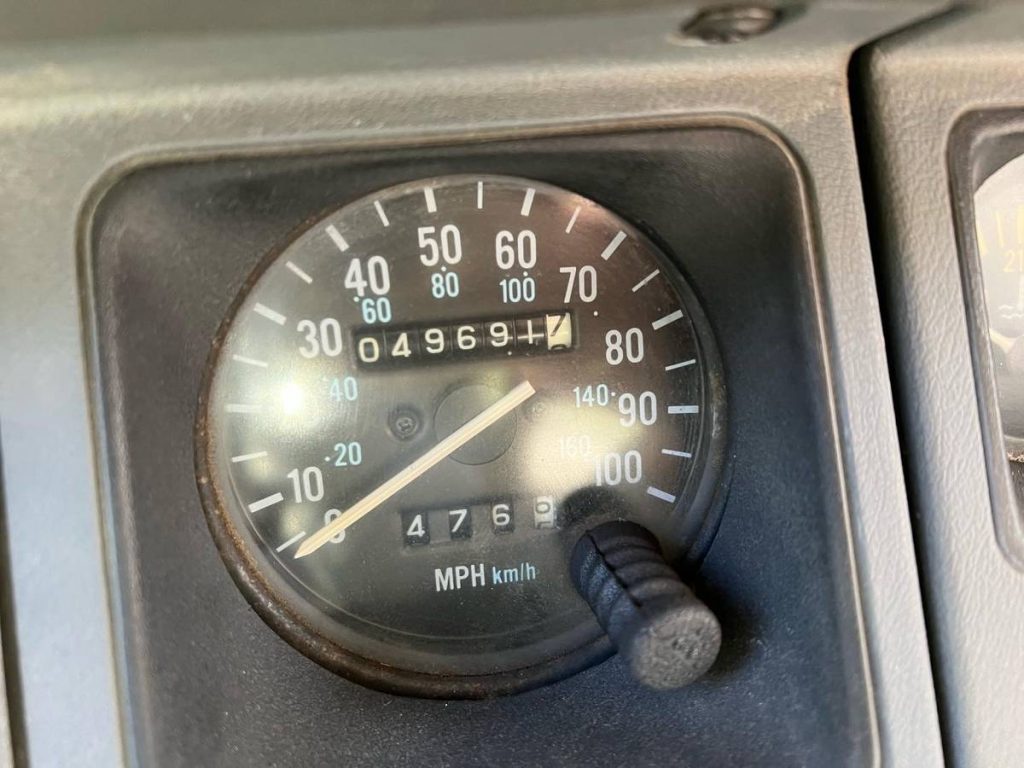 The real draw of this particular Jeep may be the odometer: Forty-nine thousand, six hundred and ninety-one point seven miles. That’s all. The seller claims to have had “about as much fun as you can have with a vehicle” in that time, which I find hard to believe. I’m willing to bet this thing has at least another hundred thousand miles of fun left in it. And to be honest, if I didn’t need to have a day job and was able to just goof around with cars all the time, I’d be on my way down to the Bay Area tomorrow to snatch it up myself.

So that’s our show for today. You’ve got your choice of a bona-fide rear-wheel-drive brown manual wagon, or a ridiculously cheap Jeep that may or may not run. What’ll it be?