Every so often, a car gets released before the world is ready for it. The Pontiac Aztek was universally panned for its bizarre styling, yet two decades later, John Q. Public wants a crossover with a sloping roofline. The Matra Rancho paired off-road looks with front-wheel-drive hardware, now crossovers have now almost replaced sedans. The Volvo XC60 Recharge R-Design is a high-output plug-in hybrid compact luxury crossover that’s stuck around long enough to age into fashion, and tweaks for 2022 aim to keep it competitive with rivals like the Lexus NX 450h+. However, is a bigger battery pack and a more powerful 107 kW electric motor good enough to stay ahead of the pack?

[Full disclosure: Volvo Cars Canada let me borrow this XC60 for a week so long as I returned it with a full tank of premium fuel and wrote a review of it.]

[Editor’s Note: Welcome to Sensible Car Reviews! This is where we review “boring” cars. Why? Because Thomas really, really likes sensible cars, and we all like that he likes them, because they’re what most people are buying. So, between the exciting stuff, you’ll see these: Sensible Car Reviews. This one is a Micro-review as well, so it’s short and sweet. -DT] 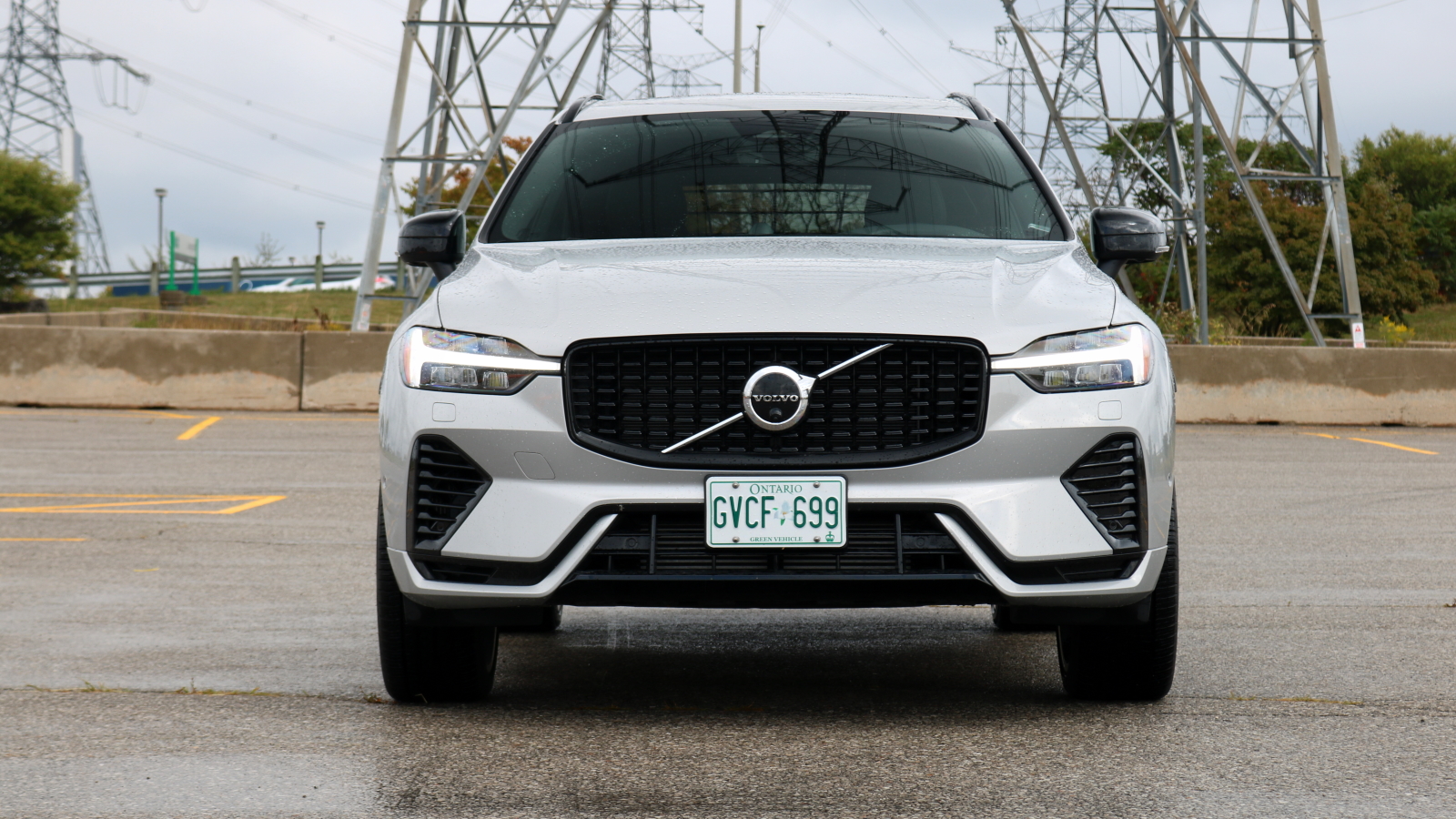 Why Does It Exist? 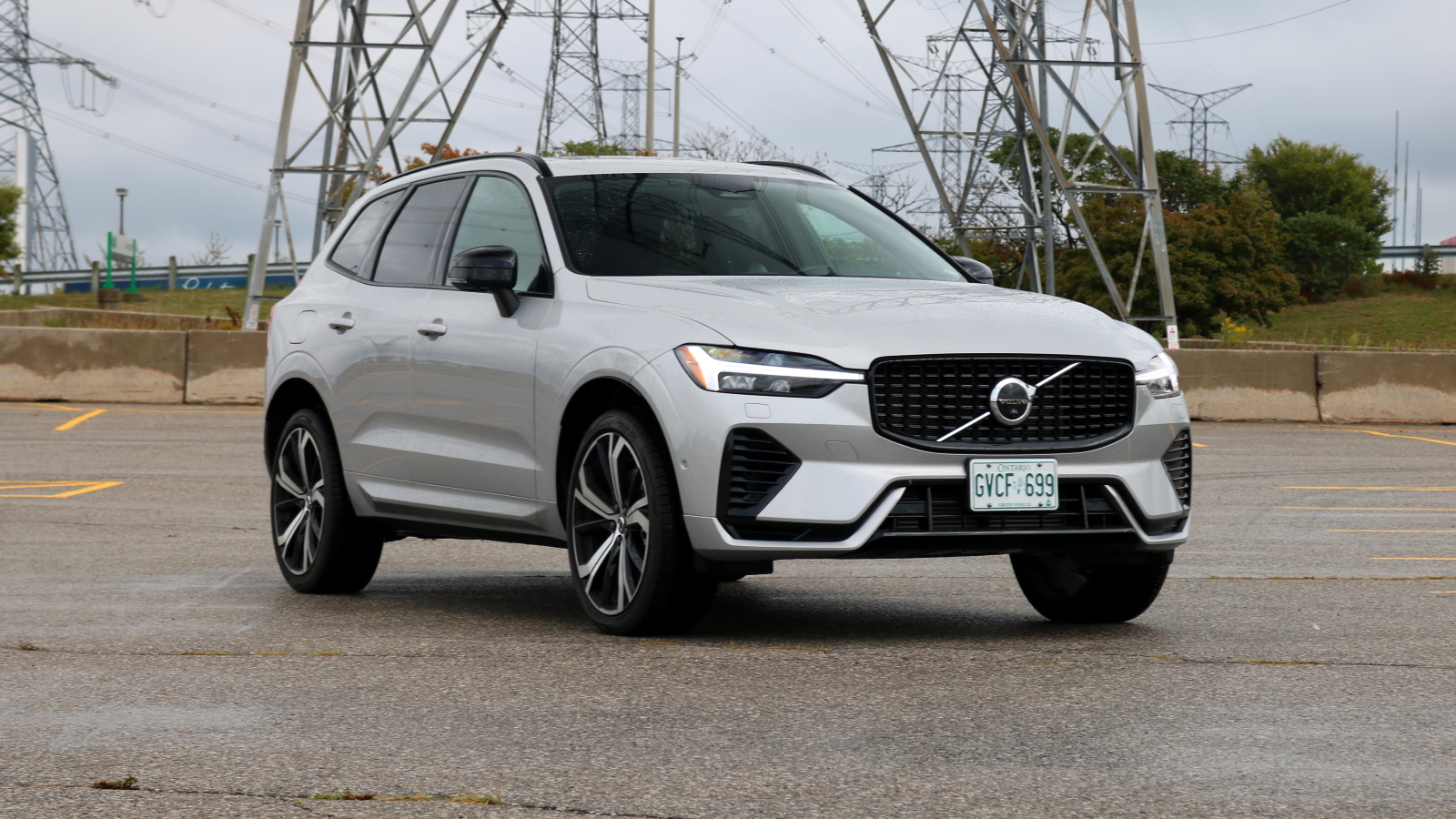 Is anyone really surprised that the XC60 Recharge exists? Compact crossovers are hotter than Venus right now and electrification is the greatest automotive buzzword since anti-lock brakes. However, it wasn’t always this way. When the current XC60 first launched back in 2017, plug-in hybrid luxury cars were weird, and making the fast version of your car a plug-in hybrid was very weird. In the roughly five years since, that’s all changed. Even the Mercedes-AMG C63 S uses plug-in hybrid tech to go faster, so the XC60 Recharge is less of a curiosity and more of a viable high-output option in the compact luxury crossover segment. 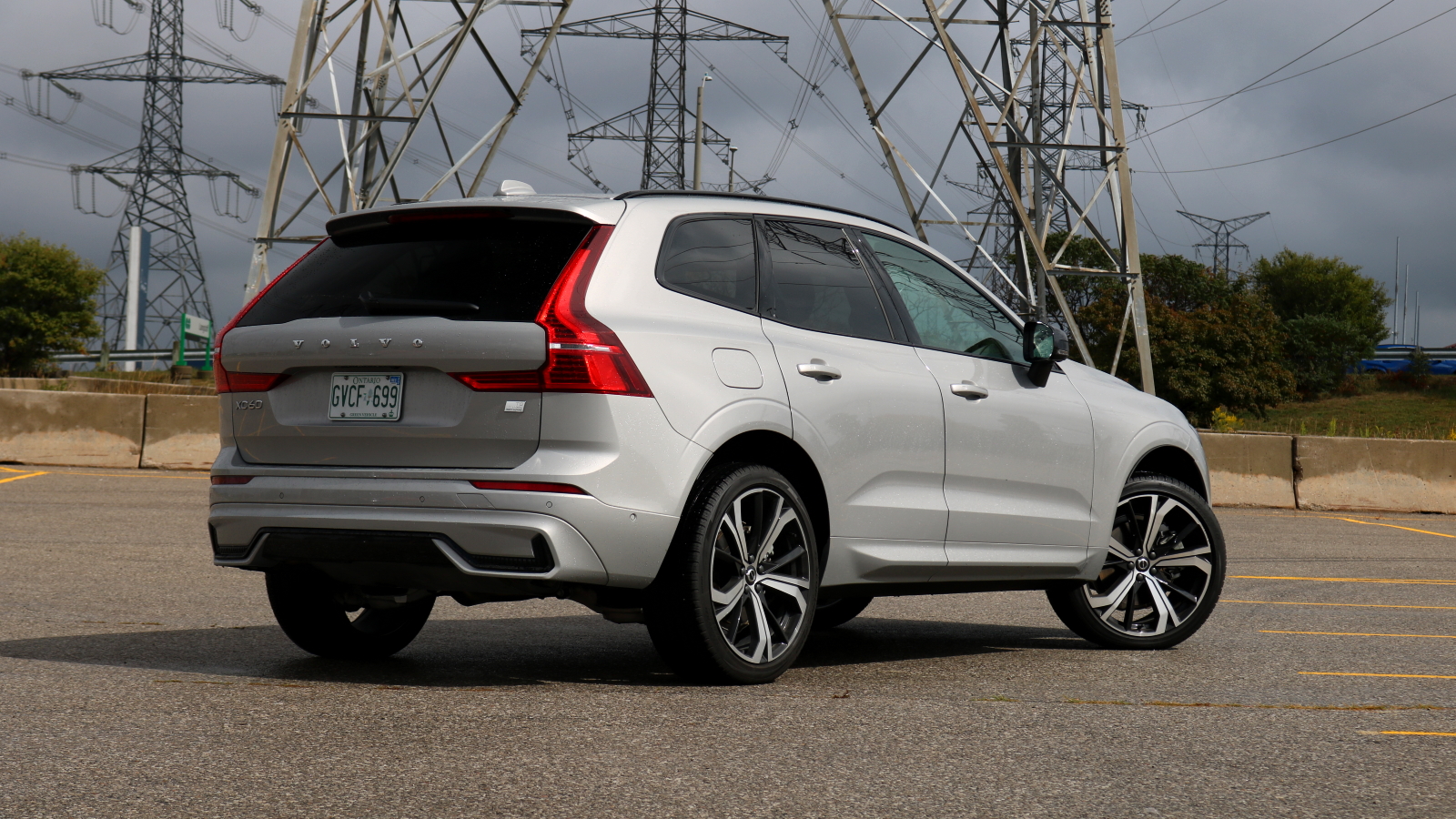 In a word, sharp. While manufacturers like Lexus designed massive-grilled compact crossovers that would look at home at Hot Import Nights, Volvo kept things at 40 below with clean, crisp linework that’s been aging like a vampire. Thor’s Hammer might be the coolest name ever devised for a set of daytime running lights, while the sculpted vertical tail lights are trickles of strawberry syrup running down a scoop of vanilla ice cream. 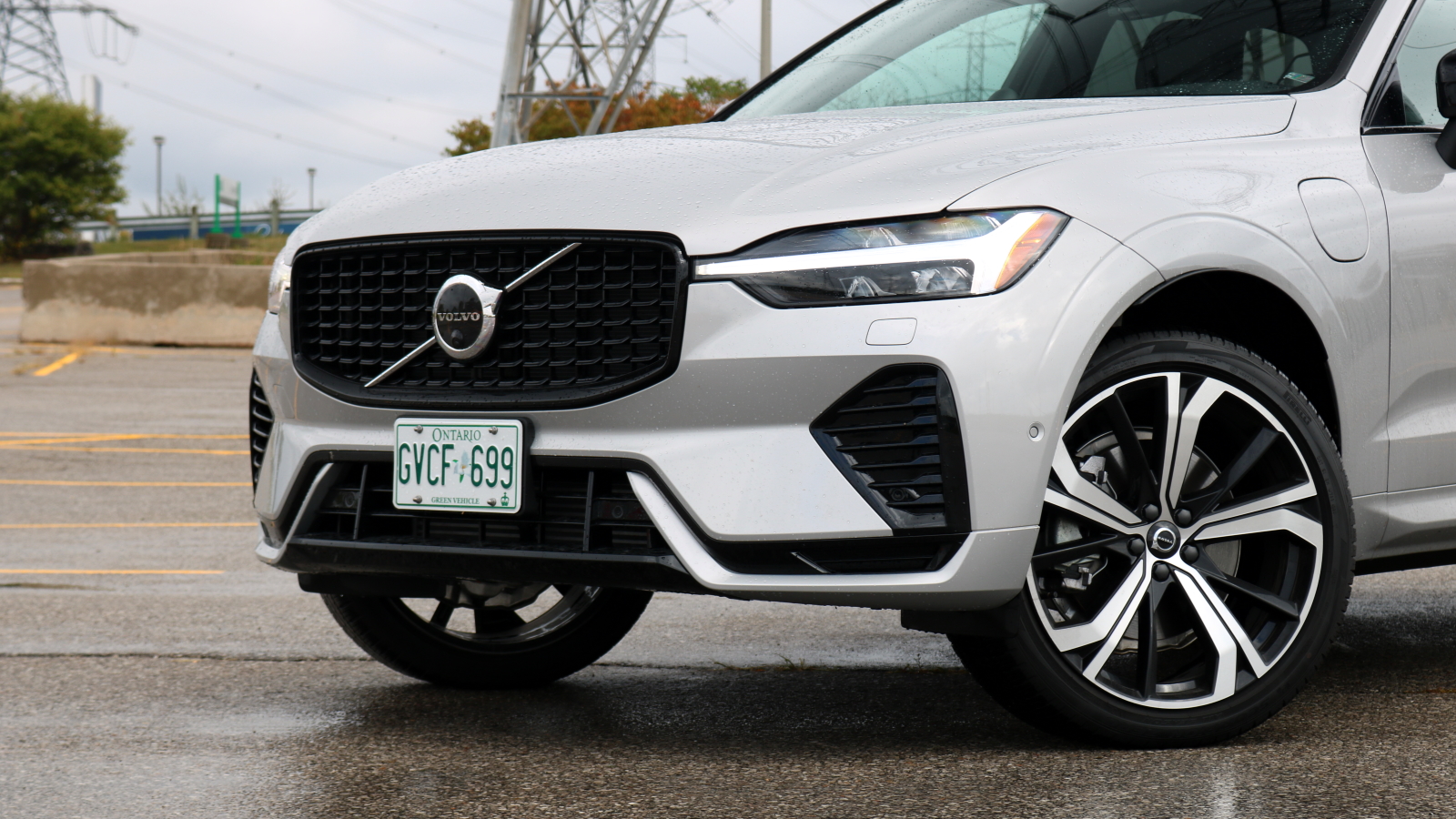 The R-Design trim gets black trim bits and a slightly prouder front valence, along with a wicked set of optional 21-inch alloy wheels. You can still get the tasty cosmetic bits for 2023 as part of a dark appearance theme, and I reckon they look great. They’re aggressive without being crass, a vanishing trend in cars today.

How About The Inside? 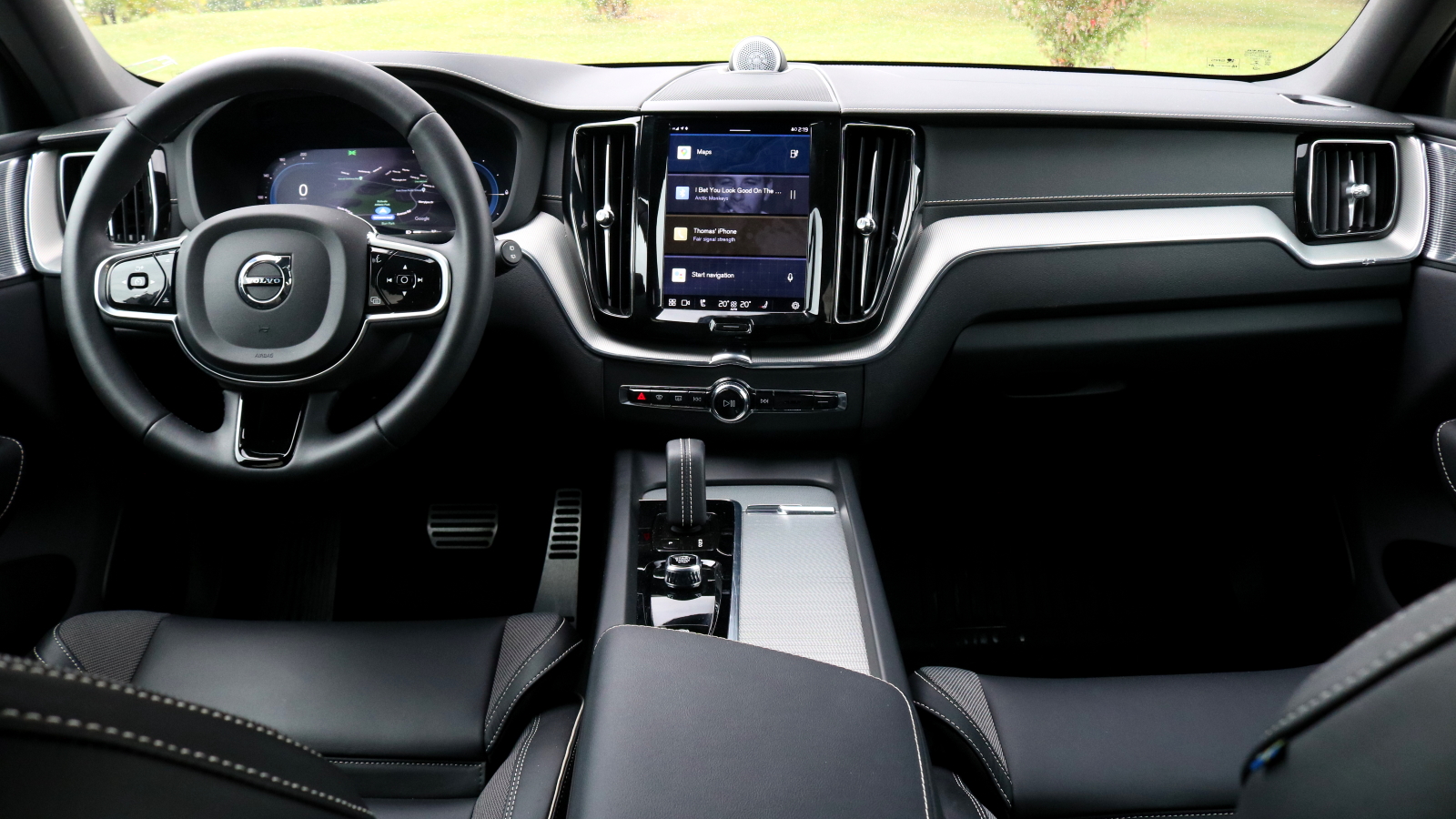 Volvo’s reinvention under Geely brought about some spectacular interiors, and the XC60’s interior is no exception. When this crossover came out, it felt miles ahead of most competitors, and it still feels quite nice today. It’s usually easy to tell how expensive a car is by how far the carpet goes up, and the XC60 aces this test. Thick carpeting blankets the sides of the center console, providing a bit of noise insulation and a comfortable place to rest a knee.

Speaking of comfort, Volvo’s seats are renowned for their cushiness, and the Swedish marque most certainly hasn’t dropped the ball in the XC60. The front chairs are a masterclass in supportive comfort, while the ergonomics are spot-on. Plenty of steering column adjustment range means that everyone from Danny DeVito to Karlie Kloss should be able to find a good driving position. However, rear seat space is a touch on the tight side for the segment, partially due to the massive center console. Speaking of that console, the cup holders and wireless charging pad are covered by sturdy roller covers like on a humidor. 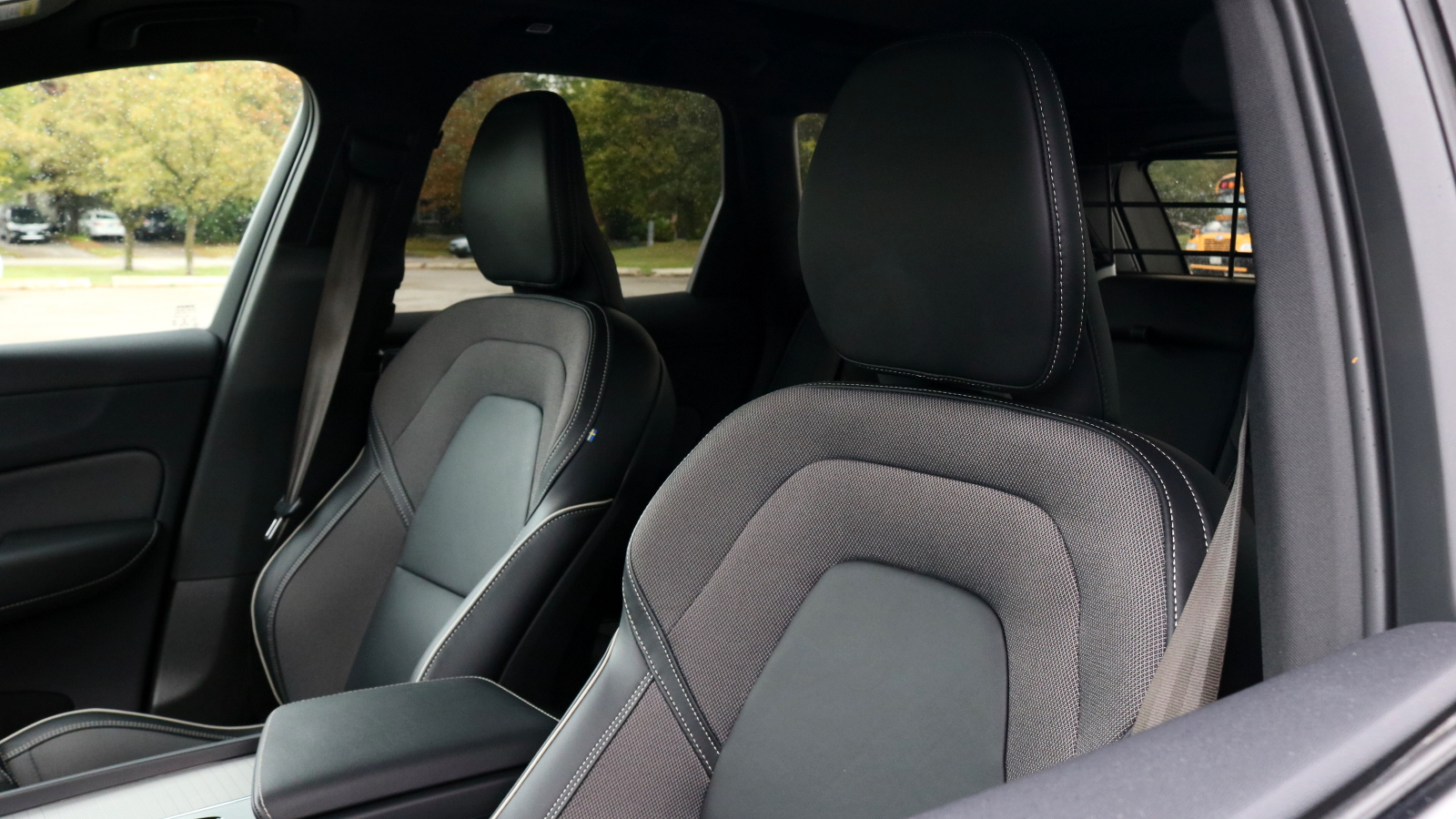 Despite the cool Scandinavian style of the interior, it’s surprisingly welcoming. Canting the center stack towards the driver makes the far edge of the touchscreen easier to reach, the flowing metallic dashboard trim has a soft, taffy-like stretch to its shape, and both the volume knob and starter knob feature lovely knurling that’s up-to-date with the latest and greatest. Mind you, not everything in the XC60 has aged so brilliantly. The filler piece above the infotainment screen looks and feels quite cheap, as do many of the lower plastics including the glovebox door. Still, aside from those bits of cheapness, the XC60’s interior feels quite well-built.

How Does It Drive? 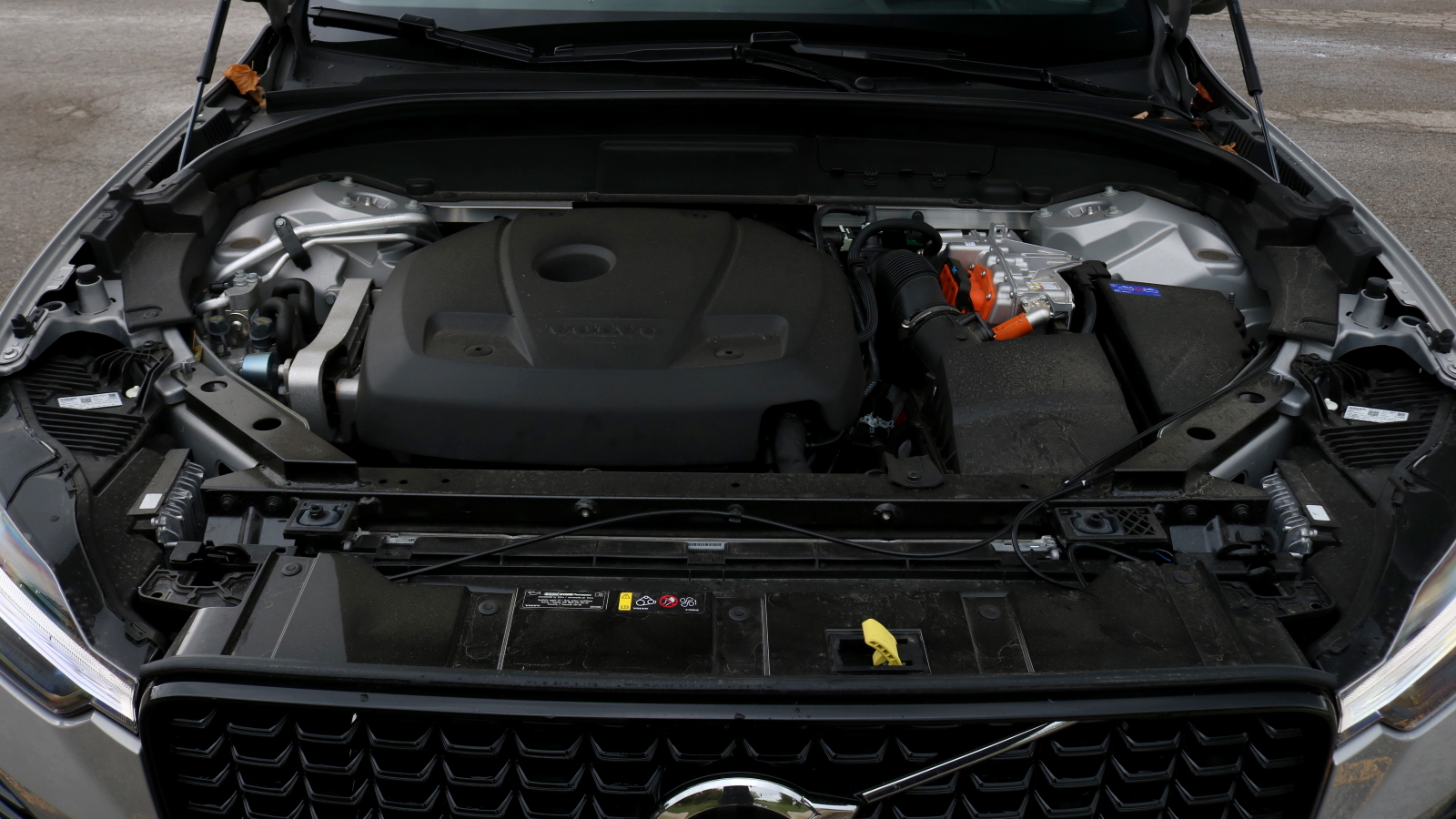 Given the plug-in hybrid powertrain, this XC60 is really a tale of two cars. Let’s start off the way most owners will often use it, in electric mode. Compared to most plug-in hybrids, EV mode feels surprisingly quick, while range is a stellar 35 miles thanks to a new 14.9 kWh battery pack. Plug in to a household socket overnight and you’ll have enough range for most errands the next day. Brilliant. I actually managed 36 miles of all-electric range, which means that Volvo really isn’t joking about this powertrain’s capability.

However, go through two sub-menus on the infotainment system and you’ll find a drive mode marked Power. Tap its little virtual tile and this XC60 transforms from a sedate electron-prioritizing commuter to a 455-horsepower highway machine spitting gas-powered and electric torque at all four wheels. Sure, the two-liter turbocharged four-cylinder engine sounds like it’s crushing gravel, but its performance is relentless. This plug-in hybrid isn’t as quick as a BMW X3 M40i or a Porsche Macan GTS, yet it still offers effortless overtaking. Speaking of effortless, shoutout to the engineers who calibrated this eight-speed automatic gearbox. It just fades into the background perfectly, to the point where its existence will never cross your mind. 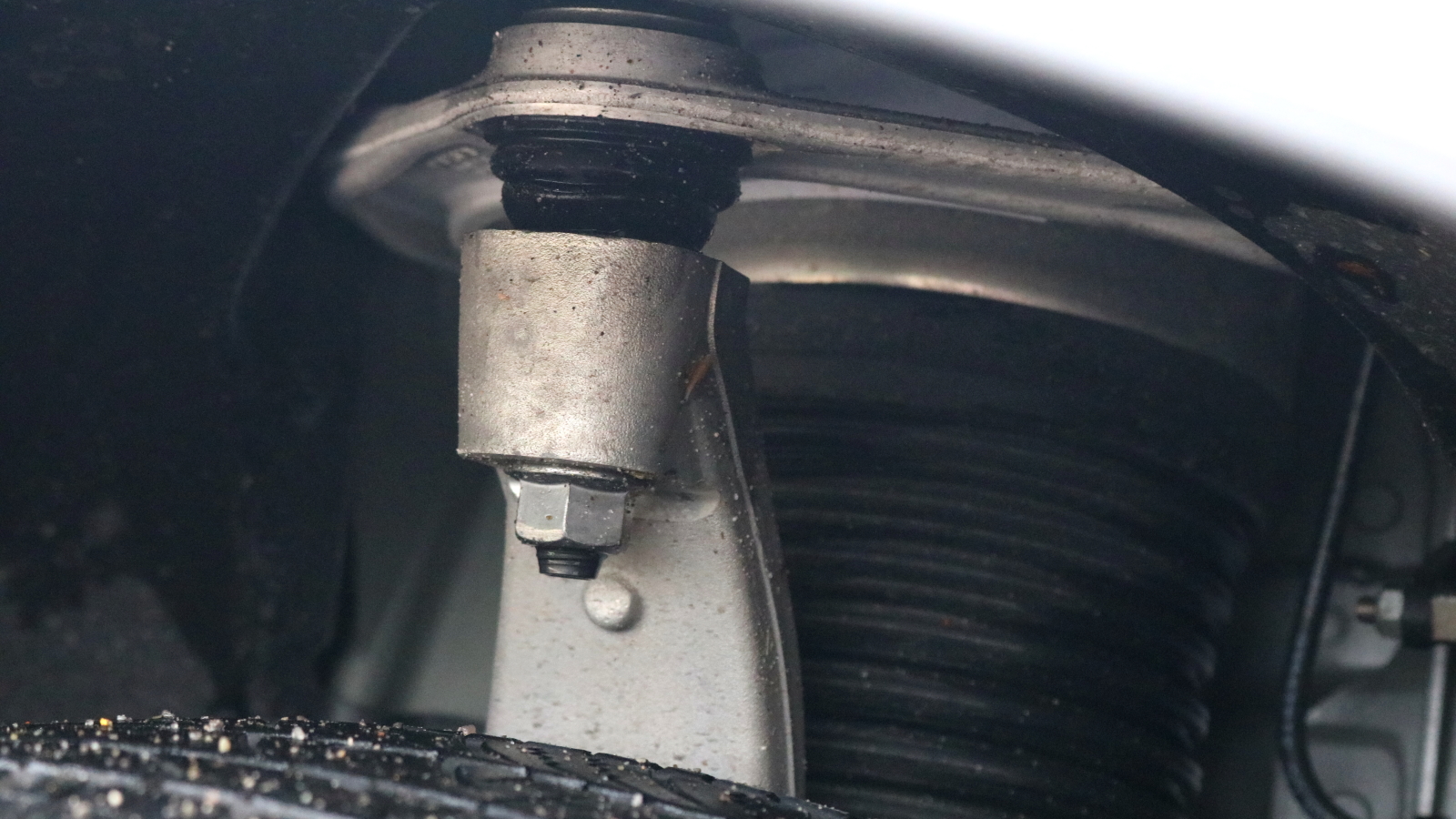 As my test car was optioned with the excellent four-corner air suspension, it will dump itself on its nuts for easier loading and better high-speed stability. In true Volvo fashion, you won’t be feeling every tar snake the road despite the R-Design spec, nor will you be hearing much either thanks to impressive noise isolation. Steering is either featherweight or light and while it lacks feel, weighting is just progressive enough to build confidence in the front end. There’s a relatively competent front-wheel-drive-biased sports sedan hiding under the tall bodywork of the XC60 Recharge, namely the S60 that also rides on Volvo’s SPA platform. While the crossover treatment adds ride comfort, it doesn’t destroy the handling.

Does It Have The Electronic Crap I Want? 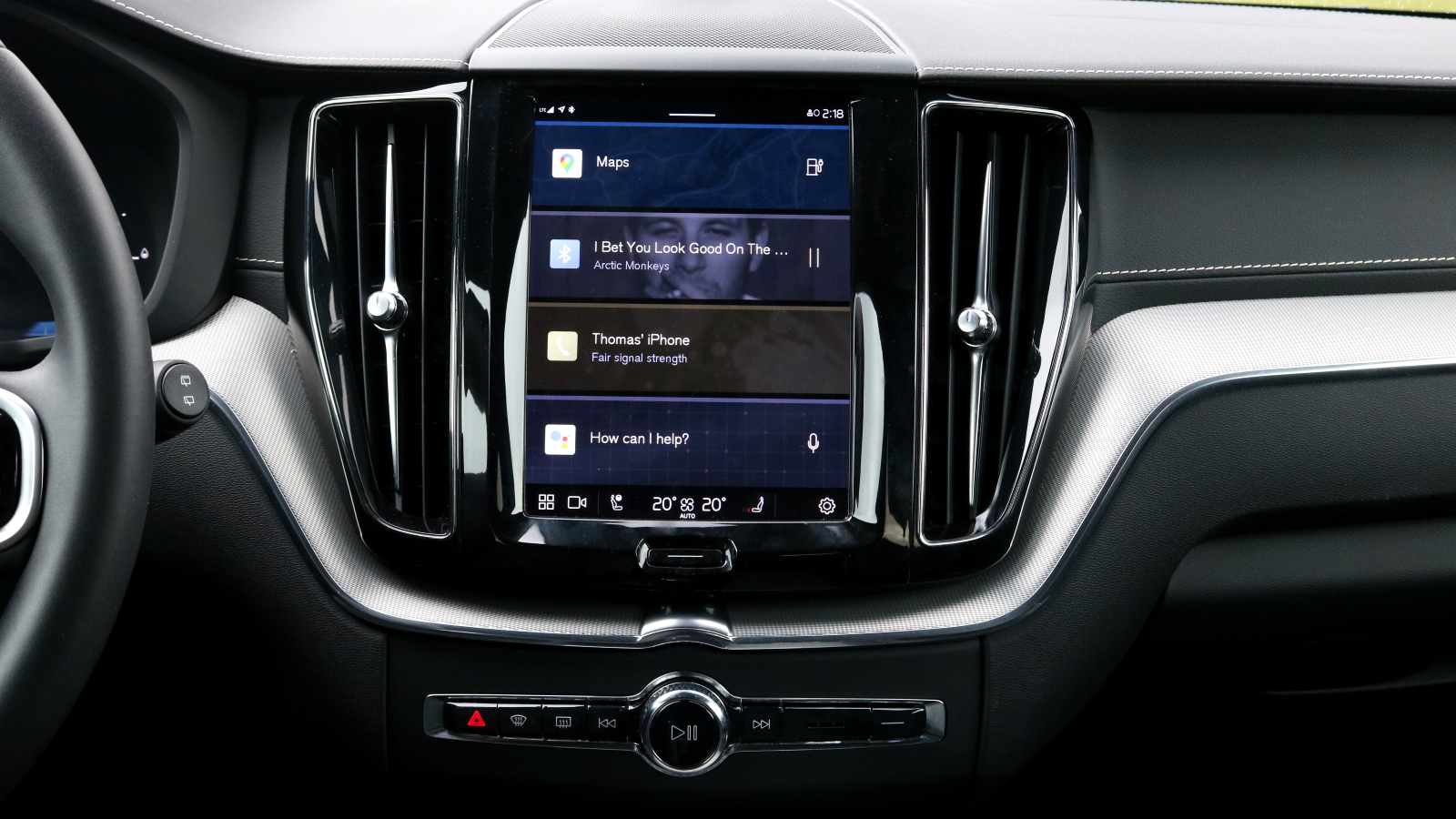 Yes and no. A few years ago, Volvo switched over to an Android Automotive OS infotainment system and took absolutely forever to get Apple CarPlay ported over. In fact, my test car didn’t have version 2.2 or higher of the infotainment OS which meant that my iPhone only worked over Bluetooth. Even wireless charging didn’t work on iOS devices, a bit of a bummer considering the software update had been out for weeks at the time of testing.

However, even if the infotainment is up to date, it feels like a step backwards from Volvo’s old Sensus Connect system. Everything is buried in difficult to access sub-menus, a stark contrast to the old system’s easy swipe-down control panel with nicely-sized tiles. Functions like drive modes shouldn’t be two menus deep, even if most owners rarely adjust them. What’s more, the volume knob on my test car was quite glitchy, often lagging like Wile E. Coyote at the edge of a cliff when I wanted to crank up the tunes. Really annoying considering the optional Bowers & Wilkins audio system absolutely goes to eleven. 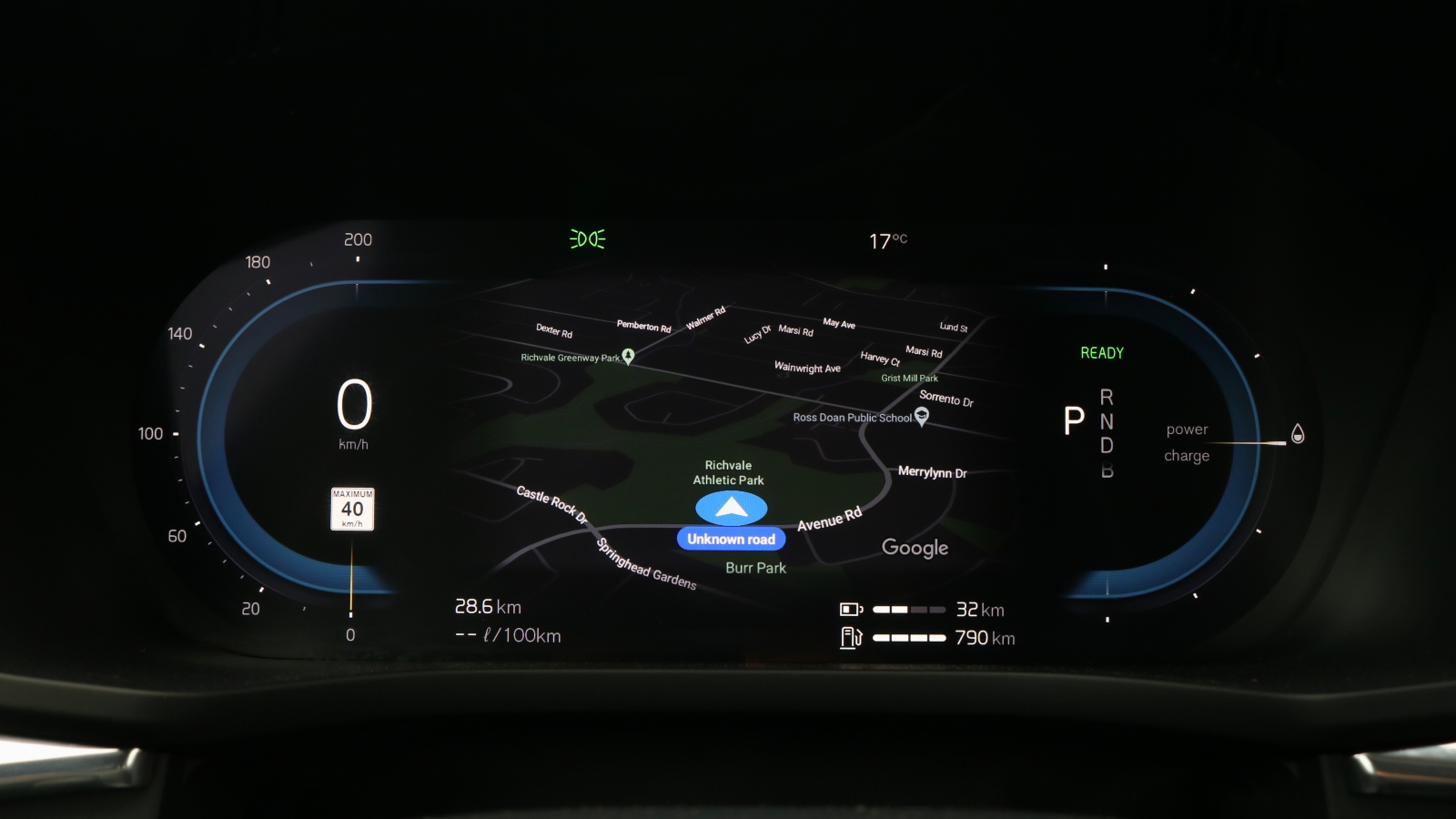 Stepping away from the infotainment, the rest of the XC60’s electronic gadgets are quite nice. Auto-dimming side-view mirrors are lovely, while the power seats adjust every which way to ensure that you’re comfortable. What’s more, the digital gauge cluster is quite slick and has Google Maps built-in, rendering the rather good optional heads-up display a bit unnecessary. There’s just enough gadgetry here to make the grade on paper, but the Volvo XC60 comes up a bit short on tech in the real world.

Does It Fulfill Its Purpose?

Absolutely. This is a stealth wealth compact crossover that’ll whisk you most places without using a drop of fuel, then fire you towards the horizon when the mood takes you. Aside from a few cheap interior bits, it feels genuinely luxurious, and the chassis tuning is remarkably good. While it’s certainly marred by sub-optimal infotainment, it’s still competitive with segment rivals. The BMW X3 30e isn’t nearly as quick or as range-endowed, and although a Lexus NX 450h+ is cheaper, it simply lacks the pace and elegance of the Volvo XC60 Recharge. 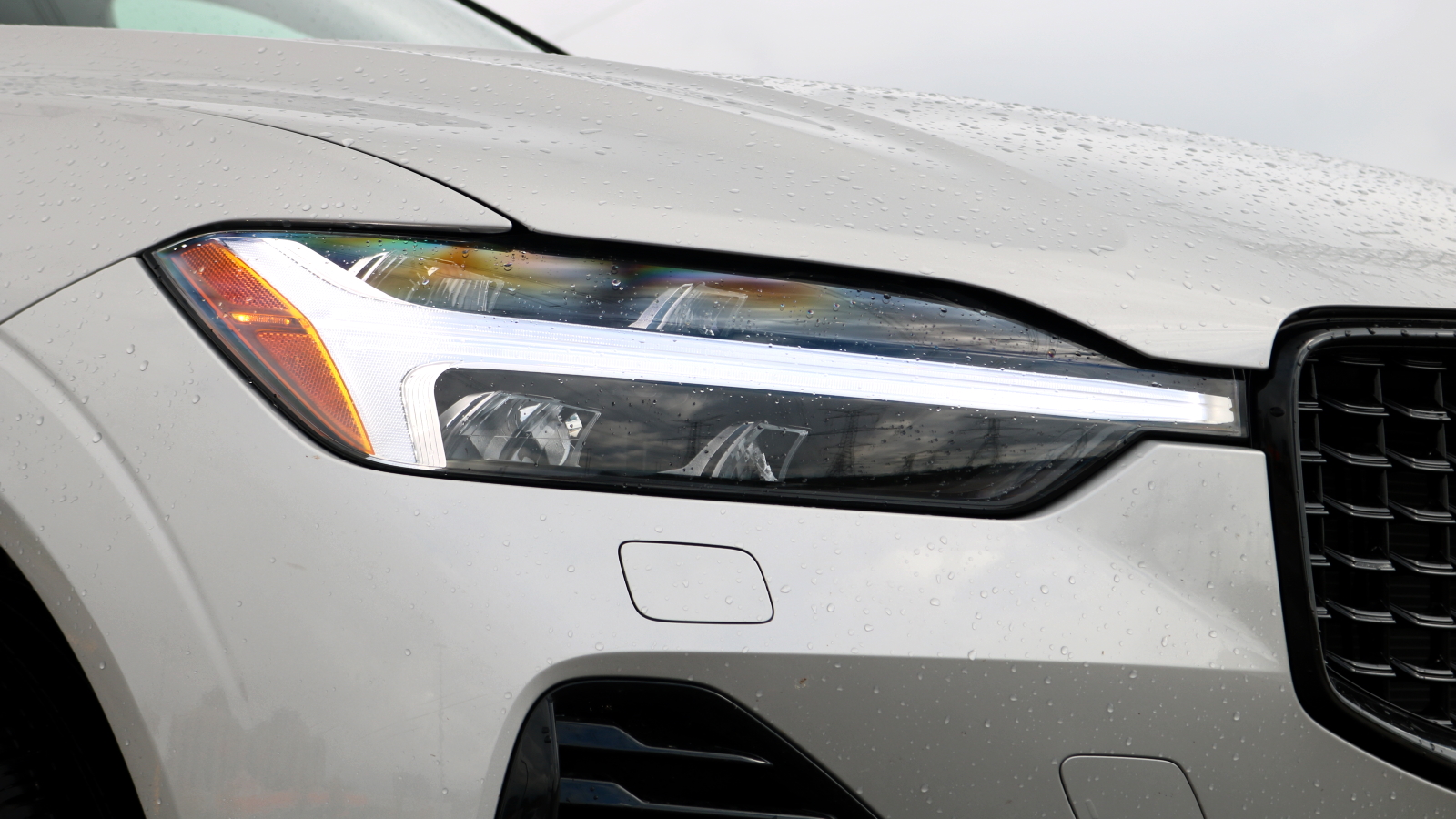 It’s the perfect electrified compact luxury crossover for people who want something nice but don’t want to deal with typical luxury car stereotypes.

Thomas is a Nu Rave-blaring, heel-toe downshifting, maple syrup-swilling, chassis-geeking, junkyard parts-hauling, floppy-haired scenester who's been writing about cars since college. His current ride is a 2006 BMW 325i with the six-speed manual gearbox. Instagram: @thomas.hundal Twitter: @thomashundal
Read All My Posts »
PrevPreviousThe Push To Electric Cars Is Shifting The Auto Industry To China
NextHere’s Why Michigan, Illinois, And So Many Others Are At War With CarvanaNext