It’s not often you come across the literal finest example of a given car just cavalierly up for sale on Facebook Marketplace. And yet, here we are. Because at this very moment, for sale on Facebook Marketplace, is the ultimate realization of the very concept of a Chevy Cavalier. Where the Cavalier was once a decent but ultimately quite forgettable everyday commuter car, this one Cavalier has been transformed into something more, something far beyond its original intent, something, yes, sublime. Meet Al Conary’s Drivable Ice Fishing Shack, which can be yours for only $2,000. 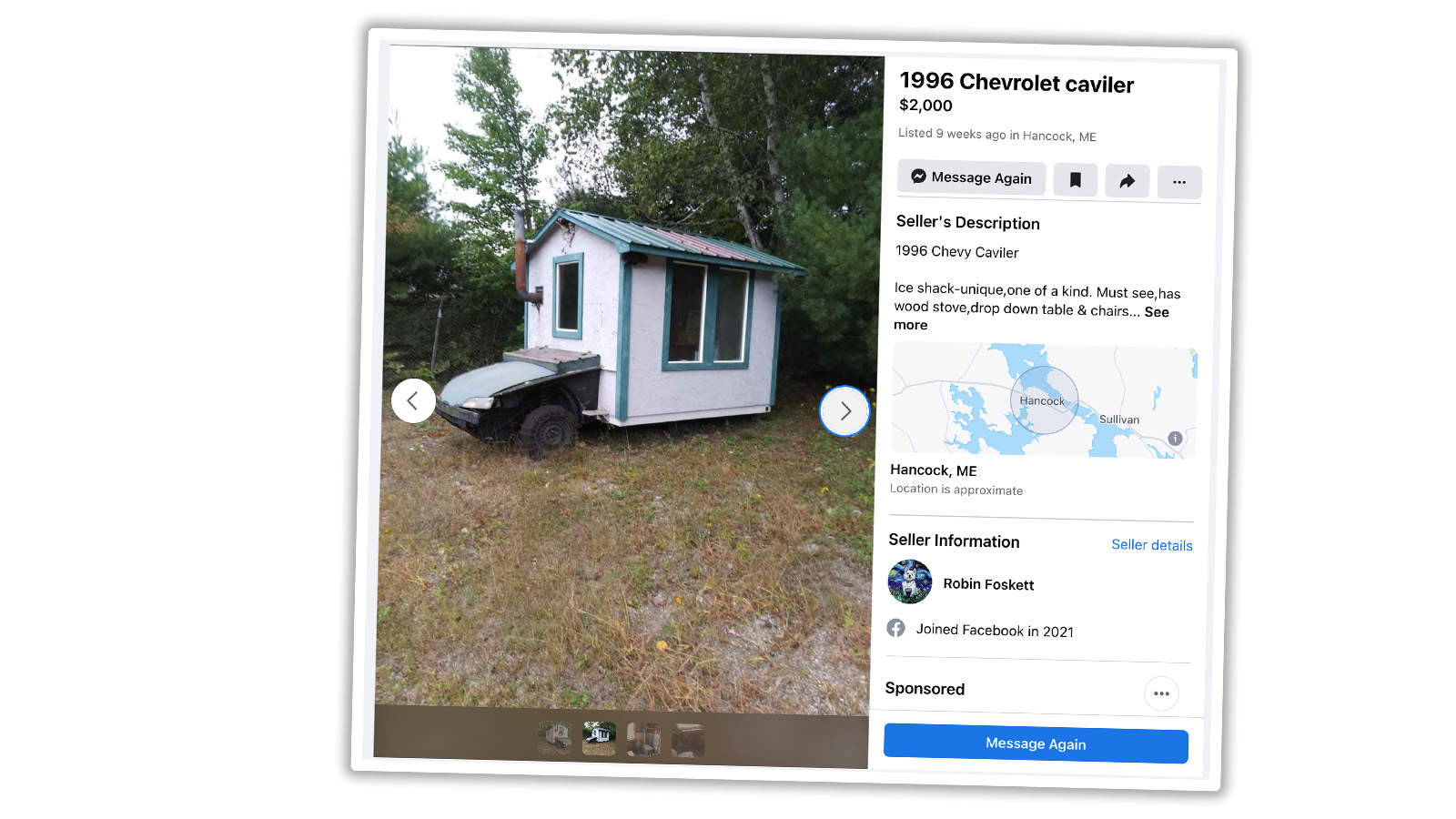 Sadly, Al is no longer with us, which is why is partner Robin has decided to sell the evolved Cavalier. I spoke with Robin about the motivations behind this wonderful and strange machine:

“He built it because we would go ice fishing and drag the shack with snowmobiles it was very cold. He had this idea for years and always wanted to build one he could drive and stay warm. My Cavalier was available so he went about turning it into what you see. We used to drive it down the camp road next to our house right onto to the pond and fish all day. It has a wood stove for heat and cooking, table & chairs and an ice hole for jigging where he used to sit.”

Looking at the pictures, you can see how this would have certainly been a cozy and comfortable place to sit in and fish through solid ice, which is how I assume frozen fish sticks are acquired for our enjoyment.

The build was based on a 1996 Cavalier, and as you can see the original Cavalier’s bodywork is cut off at the base of the A-pillar, with the interior volume of the car increased dramatically by replacing it with a nearly cubical wooden house, complete with wood stove and the associated chimney. The roof is now a traditional house-style peaked roof, allowing for much better rain runoff performance than the original Cavalier design.

The driver’s seat appears to pivot, captain’s chair style, to lock into either driving position or sit-and-fish position. The instrument cluster is now housed in a window box-type setup under the front window, and the brake and accelerator pedals appear to be right below, on the linoleum floor tiles. 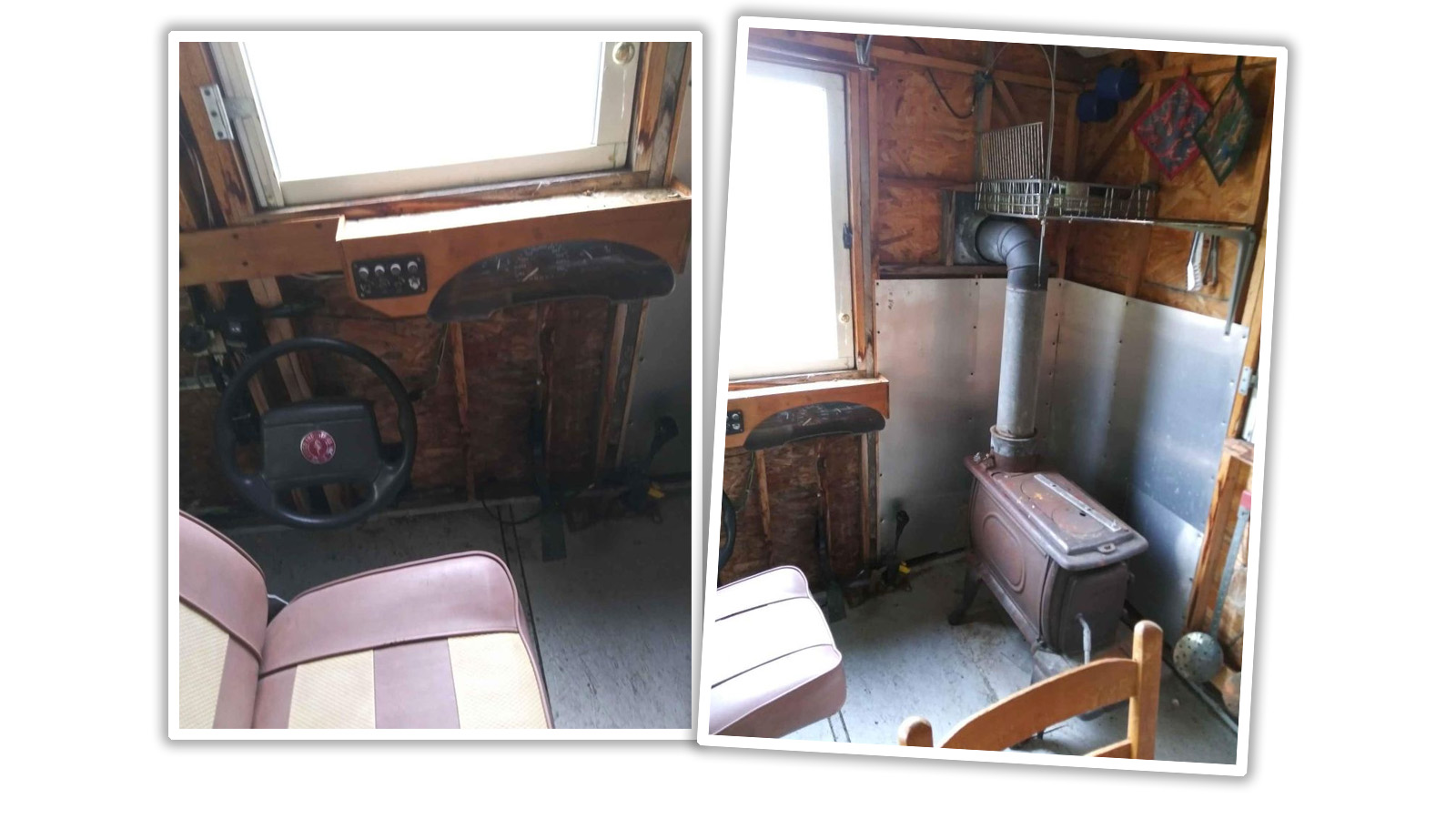 Honestly, the inside looks quite cozy, and I suspect was a very pleasant place to spend a cold day. There’s a fold-down table and chairs so a game of Clue or an intimate dinner are all easy to achieve dreams.

The front fenders have been removed, perhaps to make installation of the tire chains easier, and the rear has deployable skis in addition to wheels  to make travel over ice more effective. I’m no aerodynamicist and I had to pawn my wind tunnel during some tough times, but I think I can still hazard a guess that the new design is less aerodynamically efficient than the original Cavalier.

I suspect that the driving experience must have been made more, um, engaging with the modified setup, so I asked Robin about that:

He would never let me drive it but it went along great. There were skis from an old snowmobile on the back that could be risen up or down for stability on the ice.

It still drives, and I dearly hope that whatever lucky person snags this will consider using it as a sort of small but spacious RV. With that in mind, I asked our RV obsessive Mercedes for comment, and was lucky enough to get a bonus comment from Mercedes’ competent, non-loon-like-the-rest-of-us lawyer wife, Sheryl:

Sheryl: That cannot be legal!
Me: This is genius and absurd at the same time. Why go through the work in building an RV when you can plop an ice shack onto what looks like a reanimated Chevy Cavalier? I wonder how fast it can go before the roof flies off? 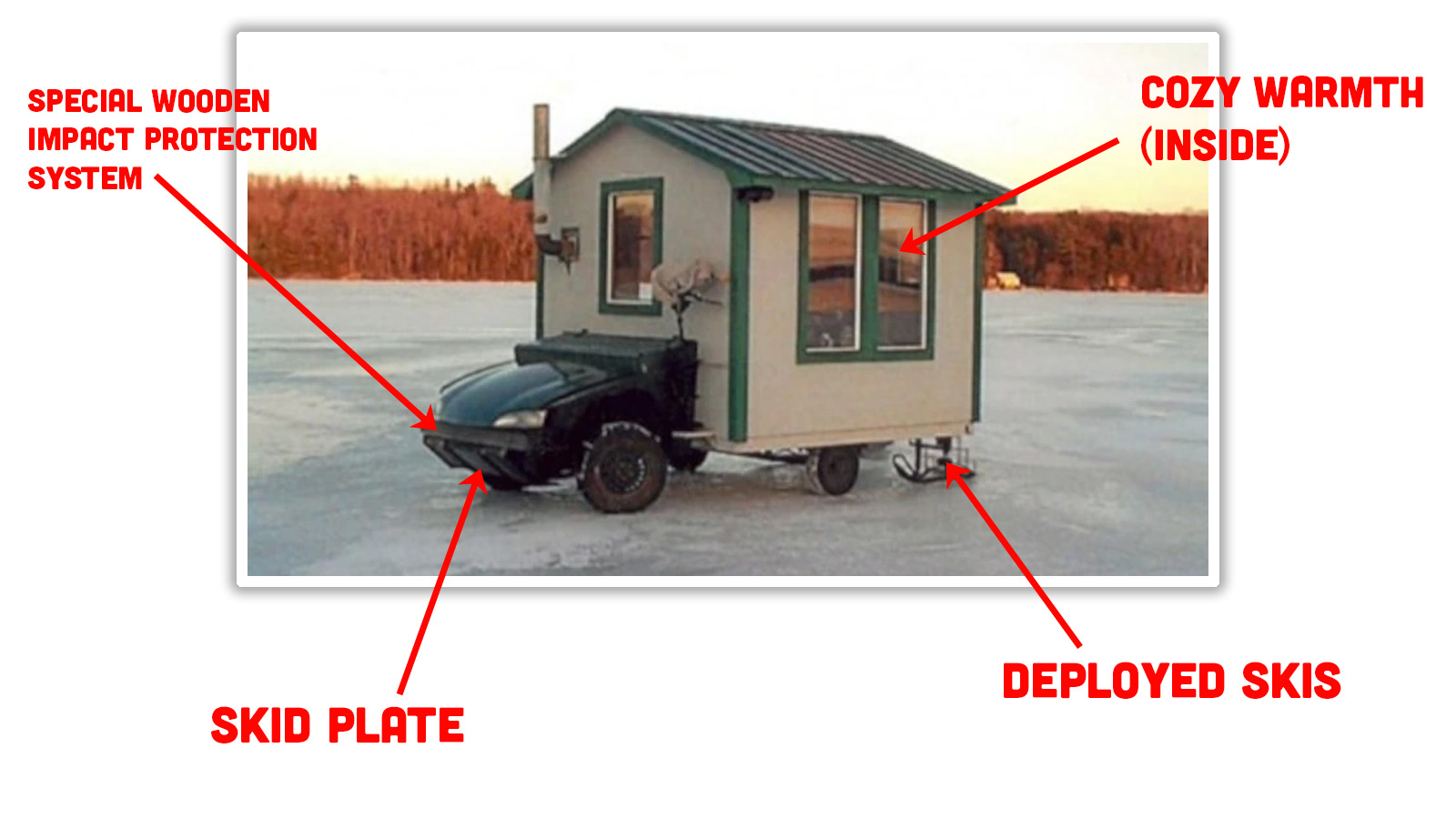 Be cool, Sheryl. No need to involve the authorities. And as far as how fast it can go before roof launch, my guess is faster than you’d be comfortable with.
Seriously, though, this thing with a little bit of attention would make a very charming little RV! Most of the hard work is already done, so you can focus on making it fantastic. Replace the wood stove with a lighter electric heater, throw some solar panels on the roof, a little kitchenette, some rakish design ideas and boom, you’re the envy of the KOA.
It’s also worth noting that this is an award-winning ice shack, as The Bangor Daily News gave it their ice shack award back in 2011.
What are you waiting for? Make an offer now!

I'm a co-founder of the Autopian, the site you're on RIGHT NOW! I'm here to talk to you about taillights until you cry and beg me to stop, which I absolutely will not. Sorry. Hug? Also, David's friend.
Read All My Posts »
PrevPreviousThe Tesla Semi Has A Weird And Annoying Issue With Its Windows
NextHere’s How Screwed My $900 Ute Still Was After I Spent Four Weeks In Australia Wrenching Alongside A Hot-Rod LegendNext