Last week, I spent a few days surrounded by hundreds of examples of the latest RVs that you can buy today. The campers I saw varied between the novel Airstream eStream and the durable Taxa Mantis, but one RV that stood out to me wasn’t new. In fact, this RV is a whole 85 years old. The 1937 Hunt Housecar is the idea of cinematographer J. Roy Hunt, and it’s so far ahead of its time that it would be usable as an RV today.

When the Housecar was built the RV industry was still in its infancy. In 1934, William Hawley Bowlus–the superintendent on construction of Charles Lindbergh’s Spirit of St. Louis–created the aluminum Bowlus Road Chief. 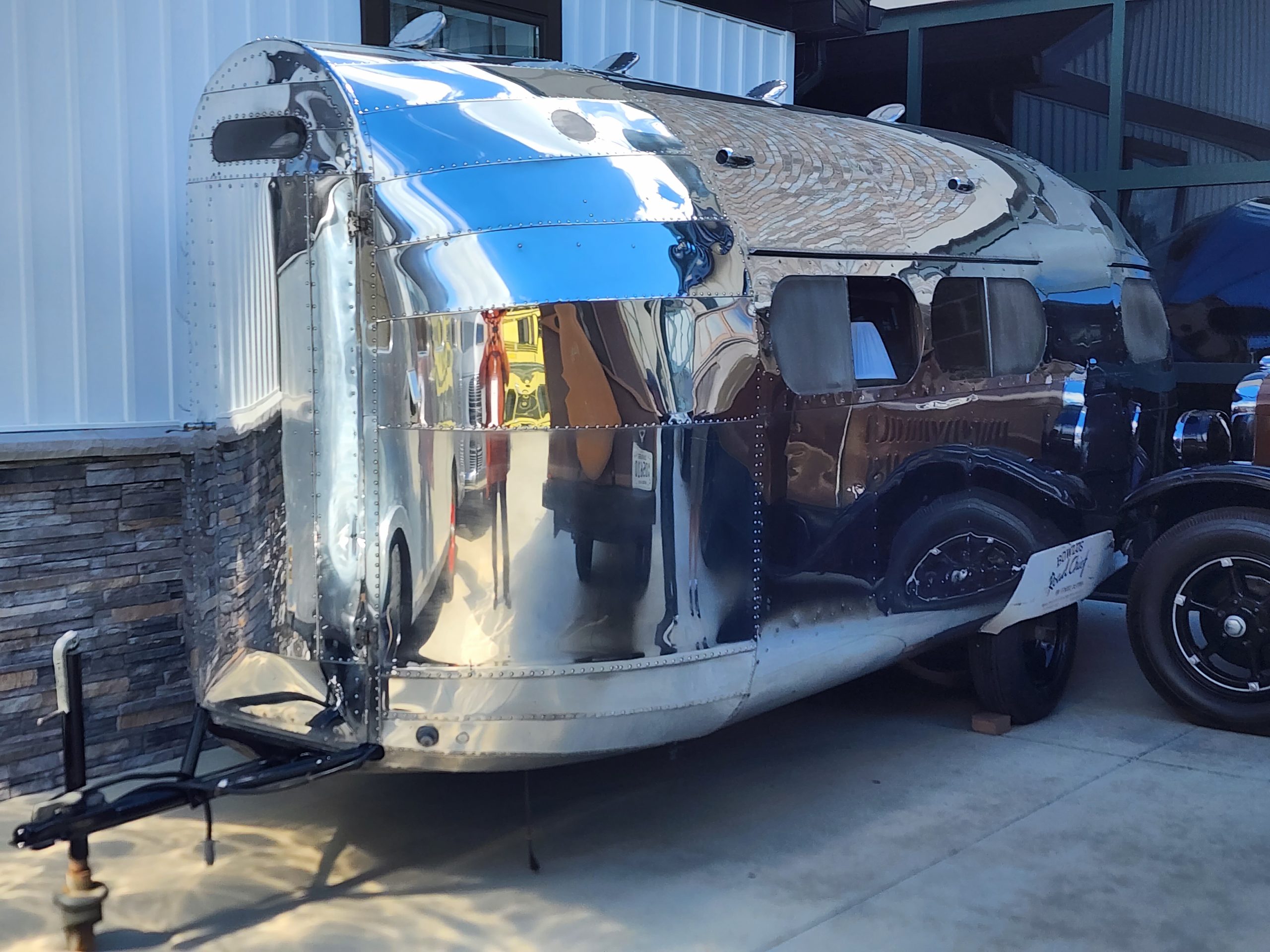 That trailer borrowed techniques from aircraft construction. Wally Byam followed it up two years later with his own interpretation of an aluminum trailer, the Airstream Clipper. Motorhomes were around during this time, too, but they weren’t called motorhomes. In 1958, Raymond C. Frank launched his Frank Motor Home, and eventually would help popularize the term “motorhome” to describe a self-propelled camper. Before then, motorhomes were known as house cars. 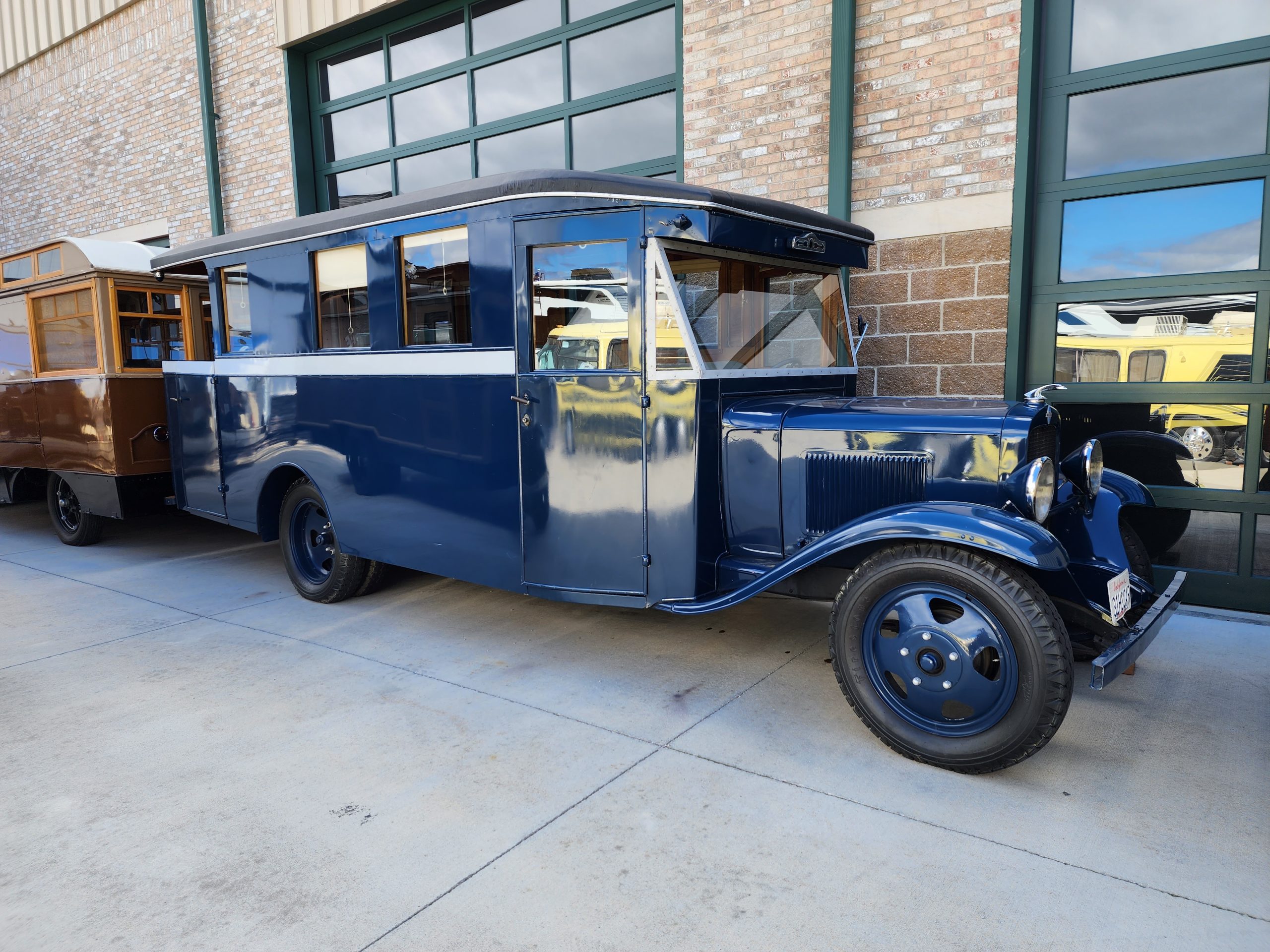 Many house cars of the past looked like a trailer or boxcar tacked onto the back of a truck. Some looked ungainly or otherwise unappealing. And the trailers weren’t much different, either. That’s what made Bowlus and Airstream stand out. Another striking RV from the era is this, the Hunt Housecar, and there’s more to it than good looks. I got to see it at the RV/MH Hall of Fame during last week’s giant RV show. 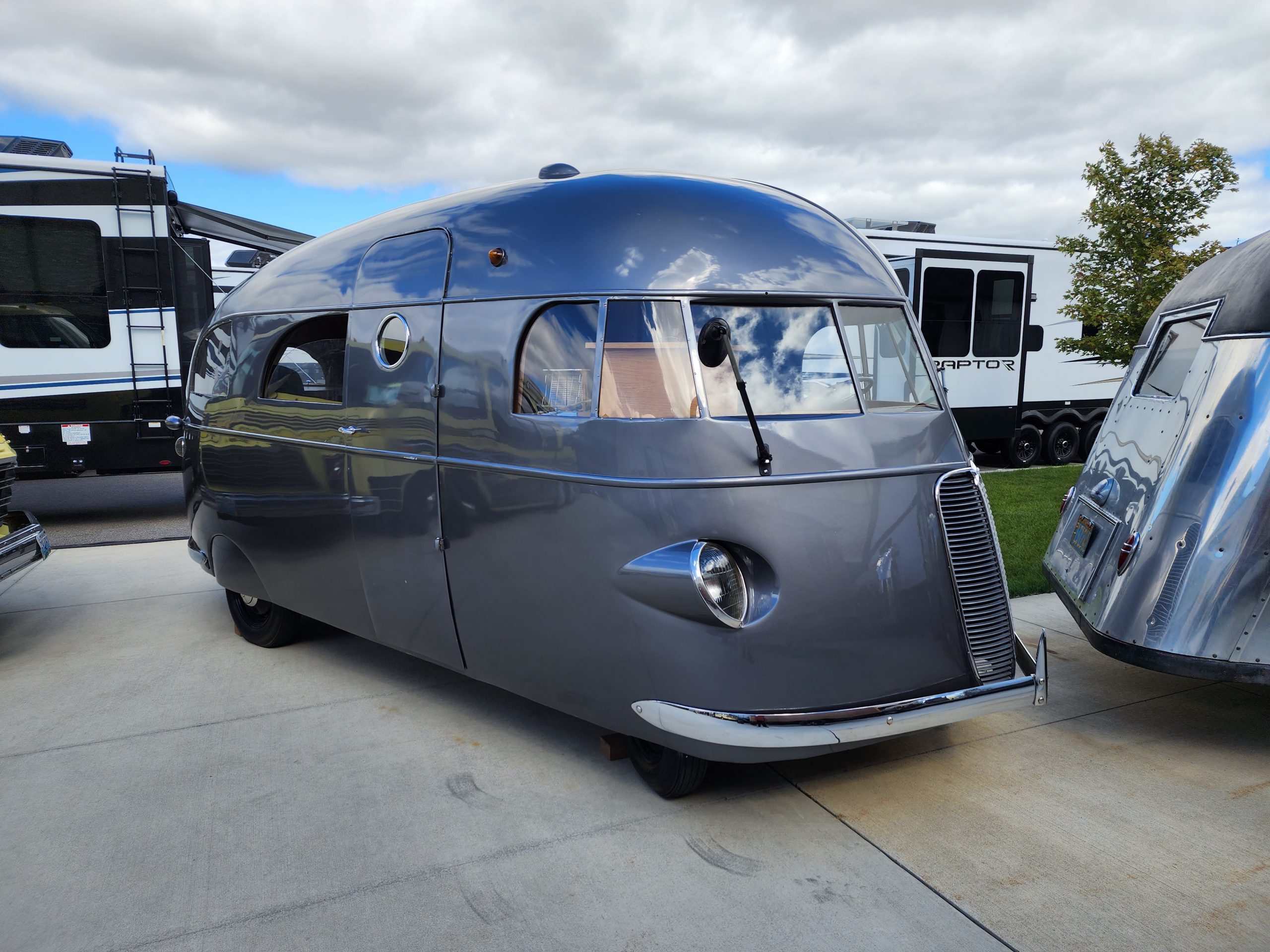 The Housecar is the brainchild of J. Roy Hunt. Born in 1884 in Caperton, West Virginia, Hunt is not a household name. And if his name even rings a bell, it’s probably because you’re a film buff of some kind. Hunt made a career in cinematography lasting between the first World War through the 1950s. Hemmings notes his work:

Despite never getting past the third grade, Hunt was an early Hollywood cinematographer whose work was acclaimed, pre-Oscar, on the Foreign Legion epic Beau Geste, and he later did the camera work for the Oscar-nominated Flying Down to Rio. His cinematic CV, though, also included B-listers such as Parachute Battalion and Brooklyn Buckaroos.

Hunt’s life wasn’t totally dedicated to film. Before his film career, Hunt raced cars and motorcycles. A car enthusiast, during his film career, Hunt worked on a steam-powered car design. And he also reportedly tried to buy Howard Hughes’ incredible Doble E20 steam-powered roadster. That’s pretty awesome by itself, but Hunt also had an offbeat hobby: he liked designing RVs. 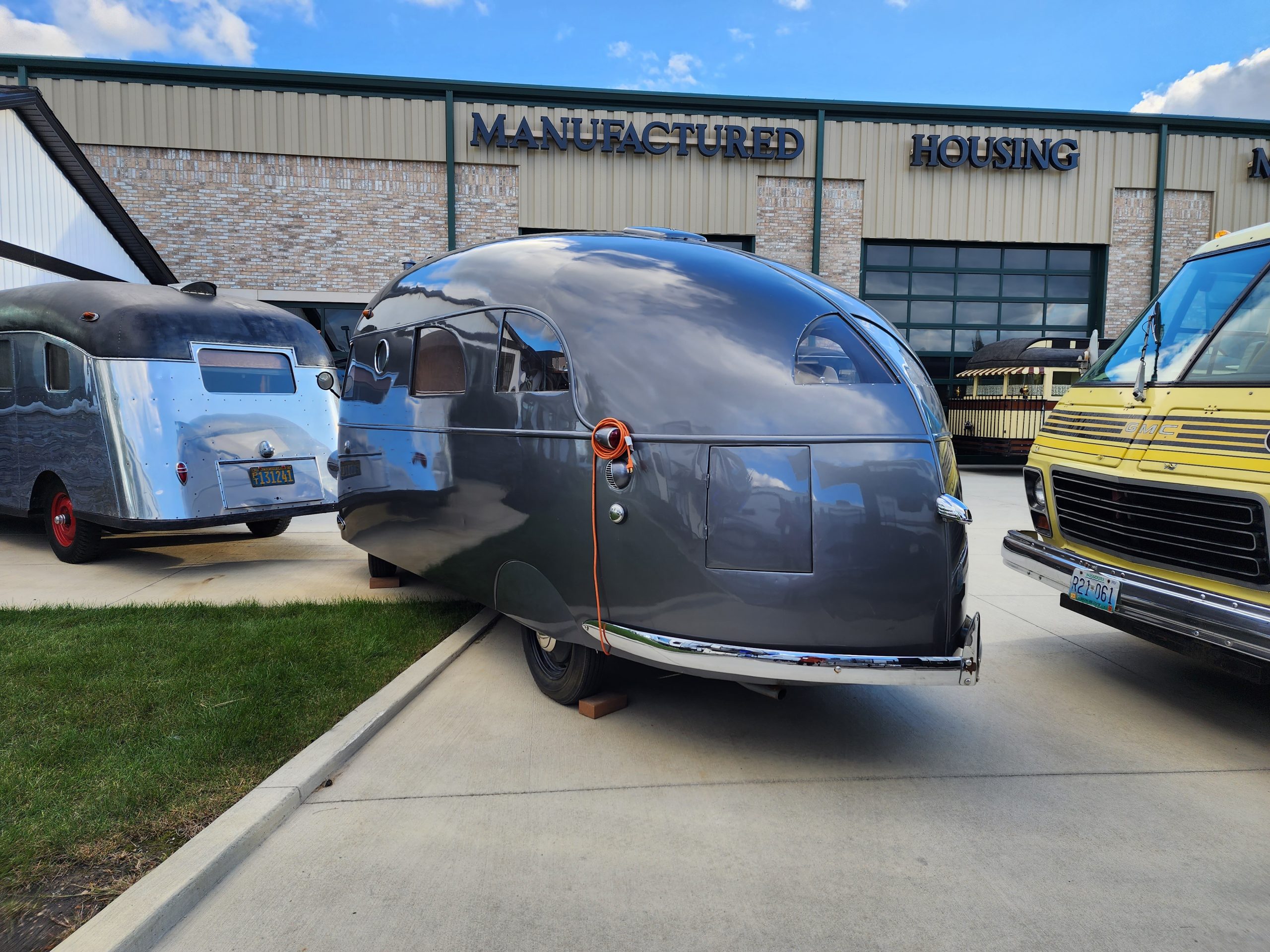 As Hemmings writes, in 1935, Hunt took a Willys sedan delivery and threw a bed in it alongside a table, a generator, and a radio set. But two years later, Hunt would build this, the Housecar.

It’s unclear what inspired this design, but it looks like streamliners of the era like the Stout Scarab and the Dymaxion. The story goes that Hunt acquired a 1937 Ford pickup. He then took it to a fabricator in Southern California to create its 16-gauge steel fuselage-like skin. The exterior is certainly striking and there isn’t a single modern RV that can come close to the elegance of this design. But as great as it is outside, the real magic is inside.

The first thing that blew my mind was the deployable step. When you pull open the door, it pulls out a step that you’d use to climb into the interior. 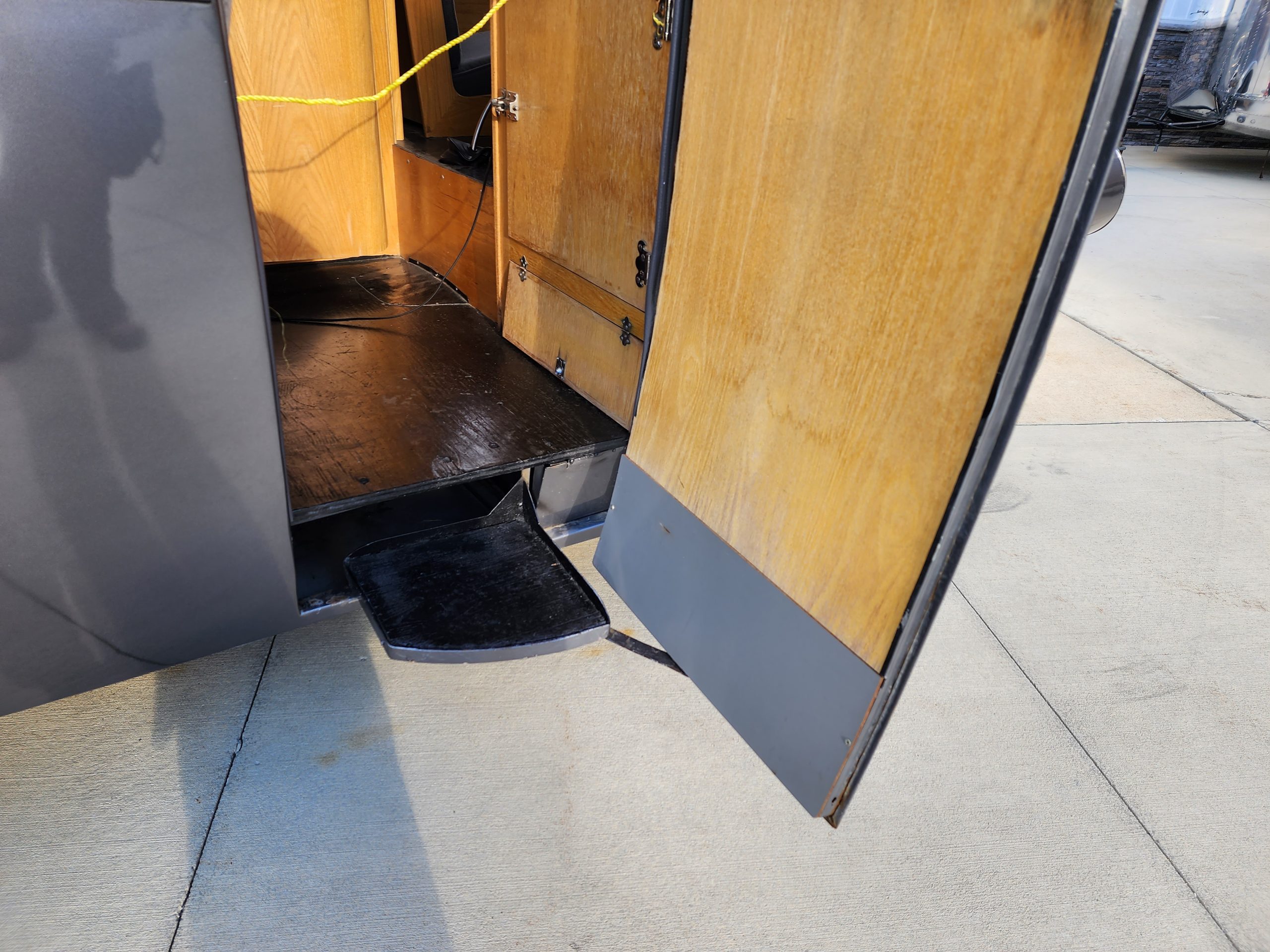 Once inside, you immediately see the unit’s small kitchen. Despite the diminutive size, you get a two-burner stove, a sink with running water, pantry, a refrigerator, toaster, and even an electric razor. Historian Al Hesselbart from the RV/MH Hall of Fame Museum notes that the razor was actually a standard feature. Yep, this RV wasn’t just a one-off built for Hunt, but a real production vehicle.

Towards the rear of the Housecar is the bedroom. There’s nothing much exciting going on back there, but it looks big enough for a comfy stay away from home. I do like the period decorations in there from the wood paneling to the stained glass shades for the lamps. Of course, since there’s a kitchen where a passenger seat would be, this is more of a camper for one, maybe two people. 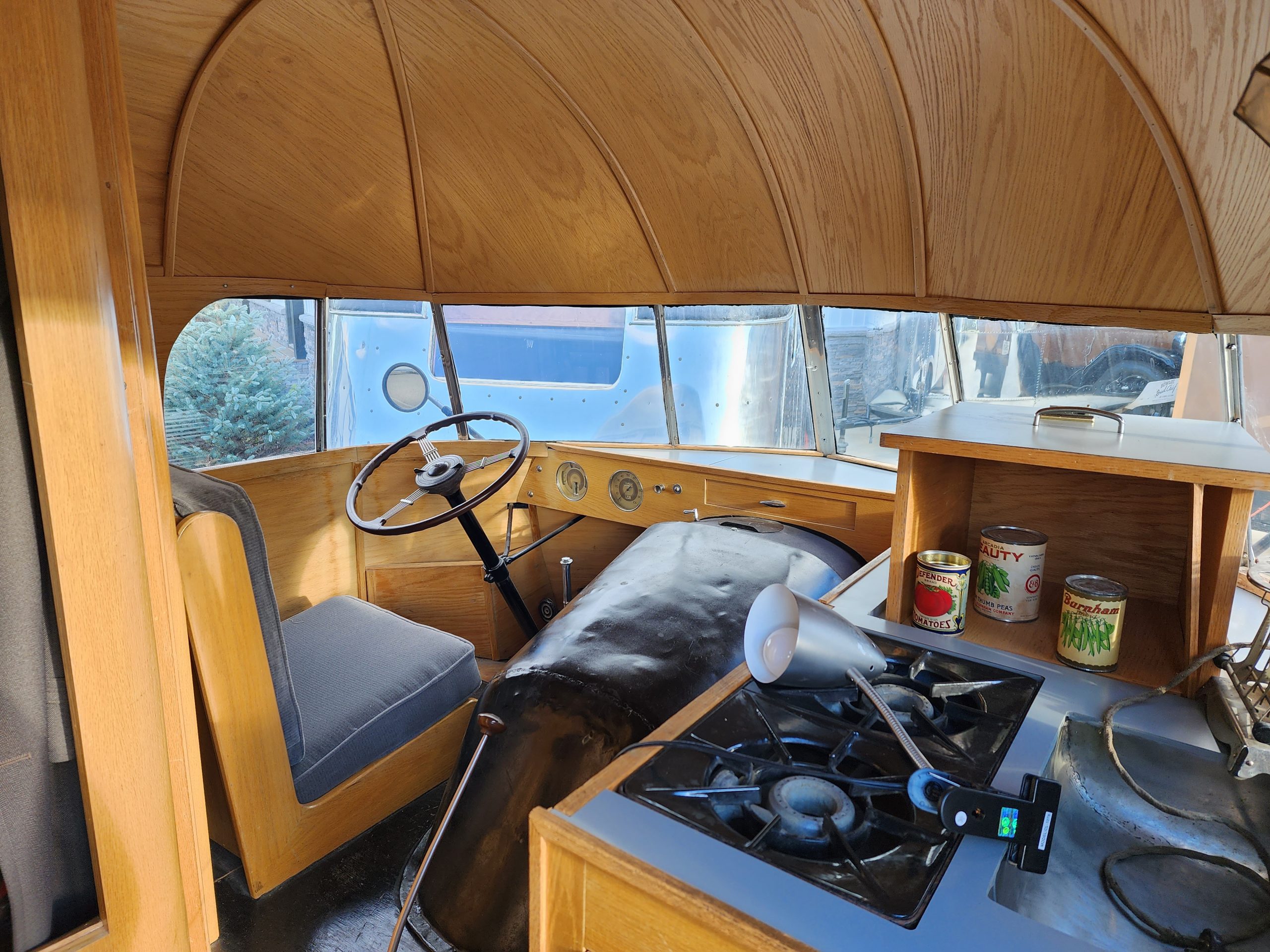 And the features don’t end there. In the middle of the Housecar is a bathroom. Inside is a sink pulled from a Pullman railroad car and a toilet that swings out from the wall. As Hesselbart explains, you would fill the sink up with water, take a shower from it, then tilt the sink to drain the water. And the chamber pot toilet would have to be emptied after use.

Sadly, the bathroom door was closed during the show. 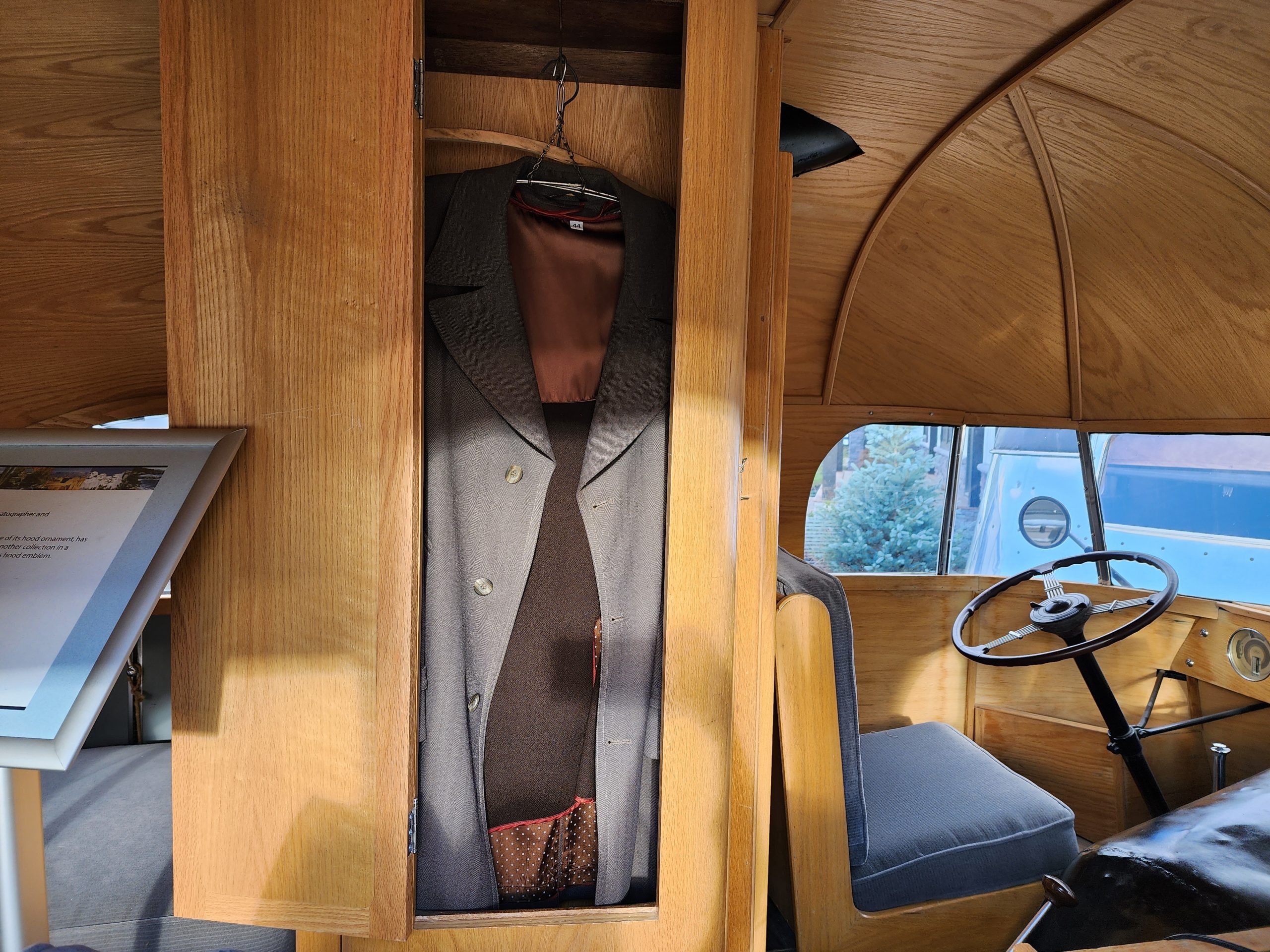 This RV often gets called the first to have a functional shower, but I’m not sure if that’s true. A full 22 years before the Housecar, Roland R. Conklin built an RV to cross the country with his family. His RV featured hot water and a working shower. But while the Hunt Housecar may not be the first, it’s still plenty impressive. This has the core features of today’s small RVs, but was done a full 85 years ago. 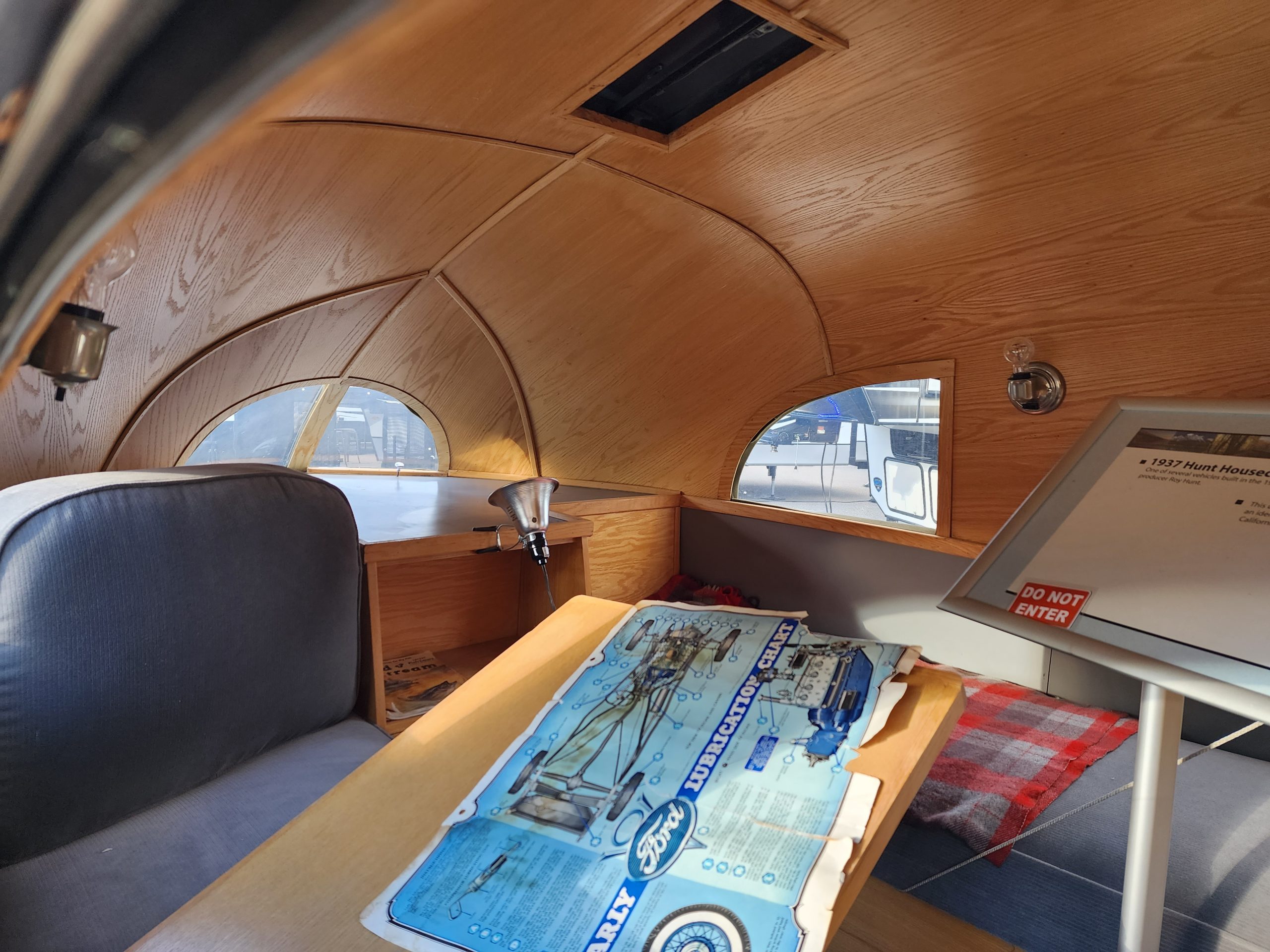 Apparently, driving it can be a challenge. The driver seat and steering wheel were moved forward, but the gearshift was not. So, you get the awkward position of basically reaching behind you to shift gears.

This particular Hunt Housecar was a part of an early RV collection owned by David Woodworth, a well-known RV historian. Woodworth found the Housecar in a scrapyard. 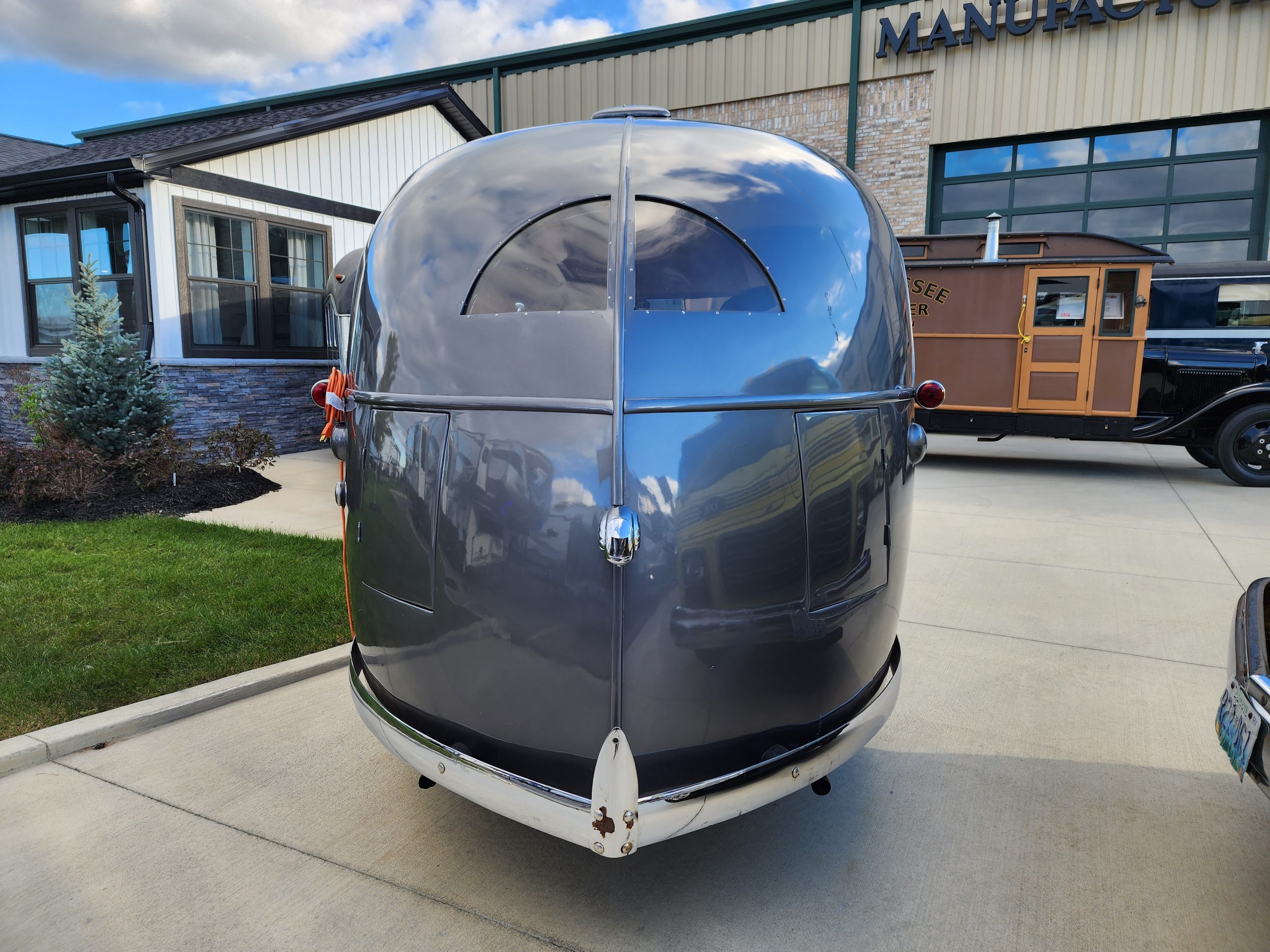 Somewhere in the RV’s history, it was converted into a van and painted black with orange tiger stripes. Inside were a bunch of mattresses and shag carpeting all over. The Housecar got a full restoration and Woodworth’s collection was purchased for the museum.

As I said before, the Housecar was actually a production vehicle and Hunt made improvements on the design along the way.

It isn’t said what’s under the steel of the 1937 model, but in 1940, Hunt made an update that involved pushing the wheels out for more interior space, a change in body to aluminum, and an upgrade to a 1939 Mercury flathead V8 making 95 HP. The updated Housecar is also said to weigh 2.5 tons.

A year later the design would evolve further, and the 1941 Housecar would ditch the gasoline engines for steam power. It featured a two-cylinder White steam engine powered by fuel oil. Later, that engine would be replaced with a two-cylinder steam engine designed by steam enthusiast Roland Giroux. It’s not known exactly how many Hunt Housecars were made, but the number is believed to be as high as 50. Some examples, like the steam-powered Housecar, appear to have been lost to time. 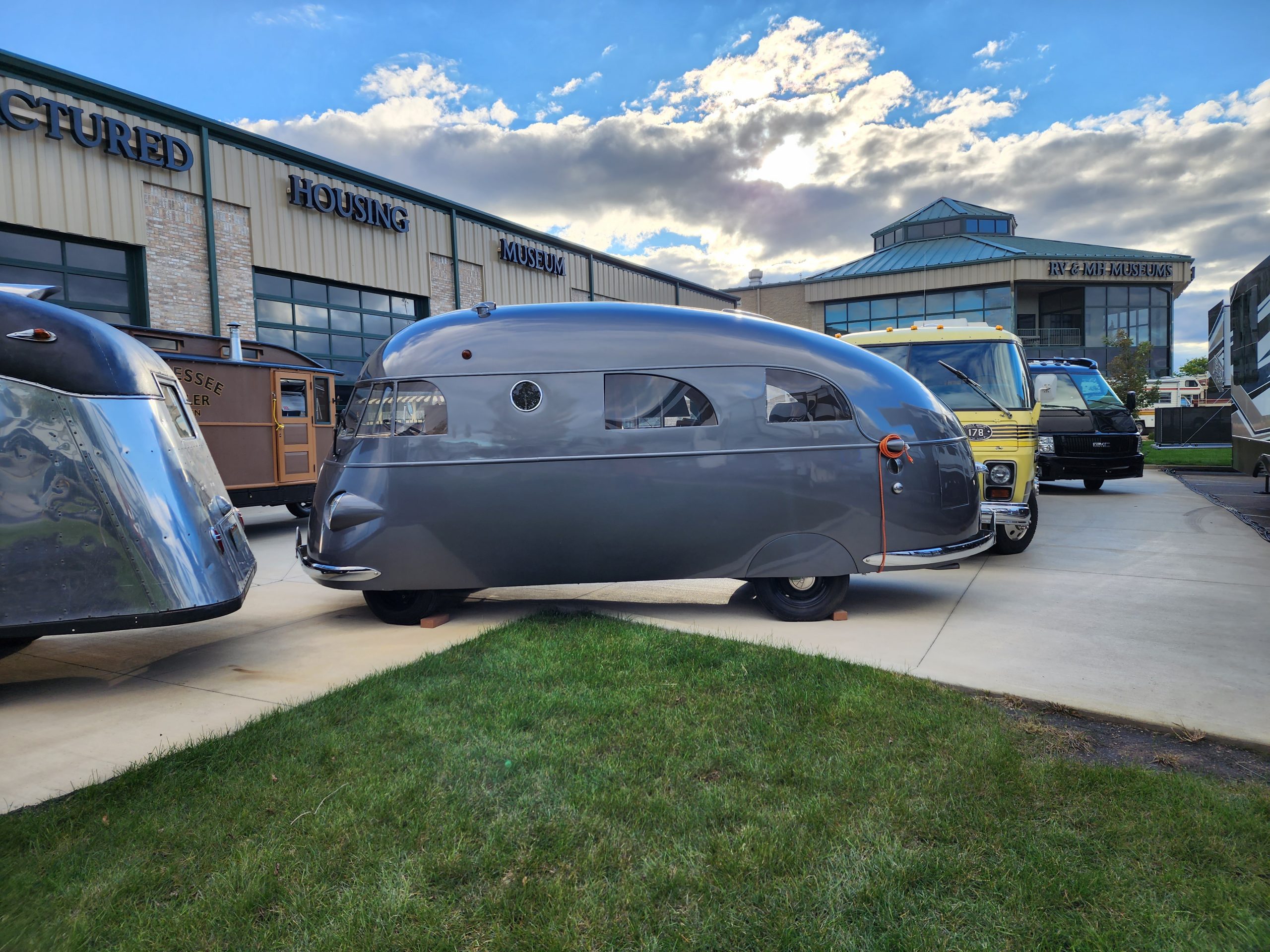 As for Hunt, he continued to make films and RVs for decades. His filmography is long and as Hemmings notes, he did both until a short time before his death in 1972. Hunt’s legacy stands with his movies and a handful of weird RVs in a couple of museums in America.

Mercedes is a lifelong fan of all things powered by an engine. When she isn't driving one of her five Smart Fortwos or her 14 other vehicles she could be found in the cockpit of a Cessna 172 or perhaps swimming in any body of water that she could find. She also has a deep love for buses of all kinds. Please send her buses. mercedes@theautopian.com Instagram: @mistymotors Twitter: @Miss_Mercedes30 Facebook.com/neonspinnazz
Read All My Posts »
PrevPreviousHere’s Why The Replacement Engine That Was Supposed To Save My $900 Australian Ute Is Nothing But A Paperweight
NextTesla Wows The World With Humanoid Robot That Can Underwhelm With Superhuman AbilityNext