The Future Of Beaters? 2007 Toyota Prius vs 2007 Honda Civic Hybrid

Today on Shitbox Showdown, we’re going into the future. (Insert cool ethereal-sounding music here.) We’re looking at cars that can only get more common in our price range as time goes on, and talking about what that might mean for us lovers of cheap cars.

But first, let’s go back in time to yesterday and see which Buick wagon you wanted:

And so it is. Shamu the Killer Whale wins. I think this is the right call; I like the looks of the old wagon better, but the newer Roadmaster feels like the “sweet spot” of automotive technology to me, and it sounds like a lot of you agree.

So let’s go from that sweet spot straight into the modern age, and look at a couple of cars that might as well be X-Wing fighters to some of us, looking under their hoods. Hybrid technology sounds cool, and it certainly works, but what happens when those cars have a couple hundred thousand miles on them, and are available for sale for only a couple grand? How does that complexity play when the fifth owner of these cars has to tinker with something on the weekend to get to work? What the hell does that light on the dash mean, and whaddaya mean it has two batteries?

I get the feeling that there are going to be a lot more cheap used hybrids for sale in coming years, so someone like me who only buys cheap used cars is eventually going to have to learn all this shit, because fifty miles to the gallon counts for a lot more than sharp handling and a snicky gearshift, at least when it comes to commuting. I’ve driven both of these cars, and they’re fine, and I wouldn’t mind driving either of them every day, as long as I have a fun stickshift purely dinosaur-powered toy for weekends (which I do). But I have to know I can keep them running myself, or there’s no point.

So let’s dive in, and see just what we’re up against. 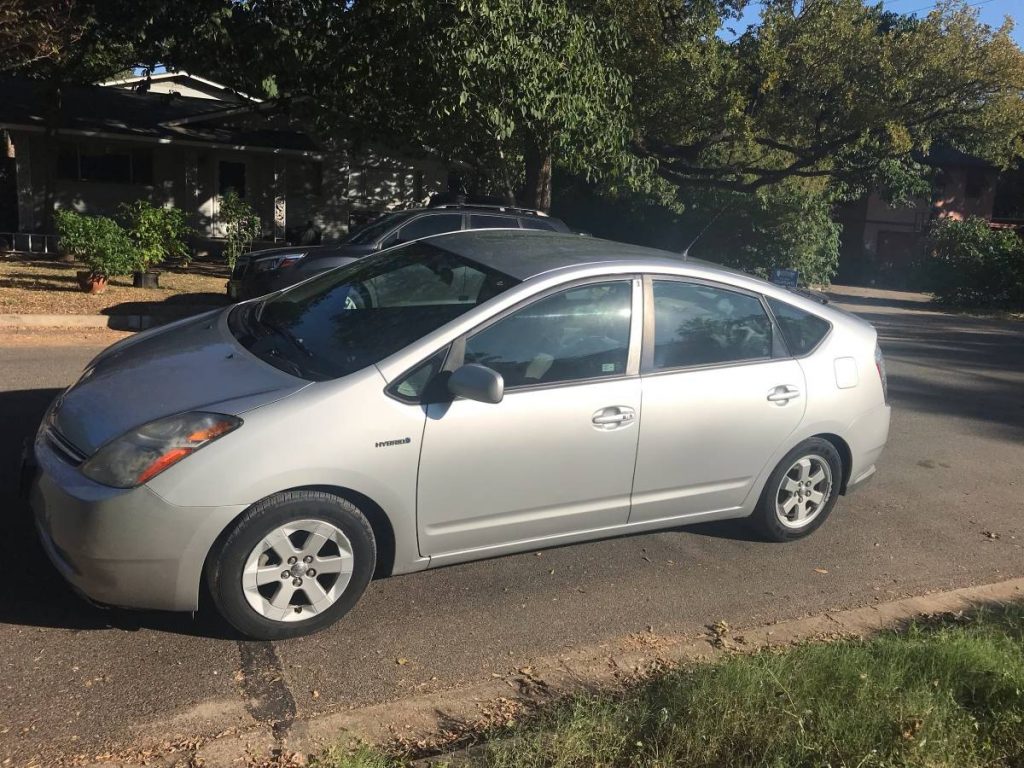 Runs/drives? Yes, but with a warning light on the dash

Priuses (or “Prii,” if you’re trying to be clever) are everywhere, and they’re Toyotas, so they probably will be everywhere for a long time to come. So it’s probably important to at least understand how the damn things work. I’m learning this too, so bear with me, and if you’re an expert in these things, feel free to point out what I get wrong.

As far as I can tell, the Hybrid Synergy Drive system consists of one small four-cylinder engine, two electric motors that can also act as generators, a really weird-ass tramsmission that I don’t quite understand, a regular 12V lead-acid battery, a big high-voltage nickel metal hydride (NiMH) battery, and a computer to control it all. One motor acts as the starter and alternator for the normal 12V side of things, and the other is coupled to the engine through that weird transmission and either supplies power to the wheels or recharges the high-voltage battery, depending on what’s needed at the time. (Sheesh. More like Hybrid Sorcery Drive, am I right?) 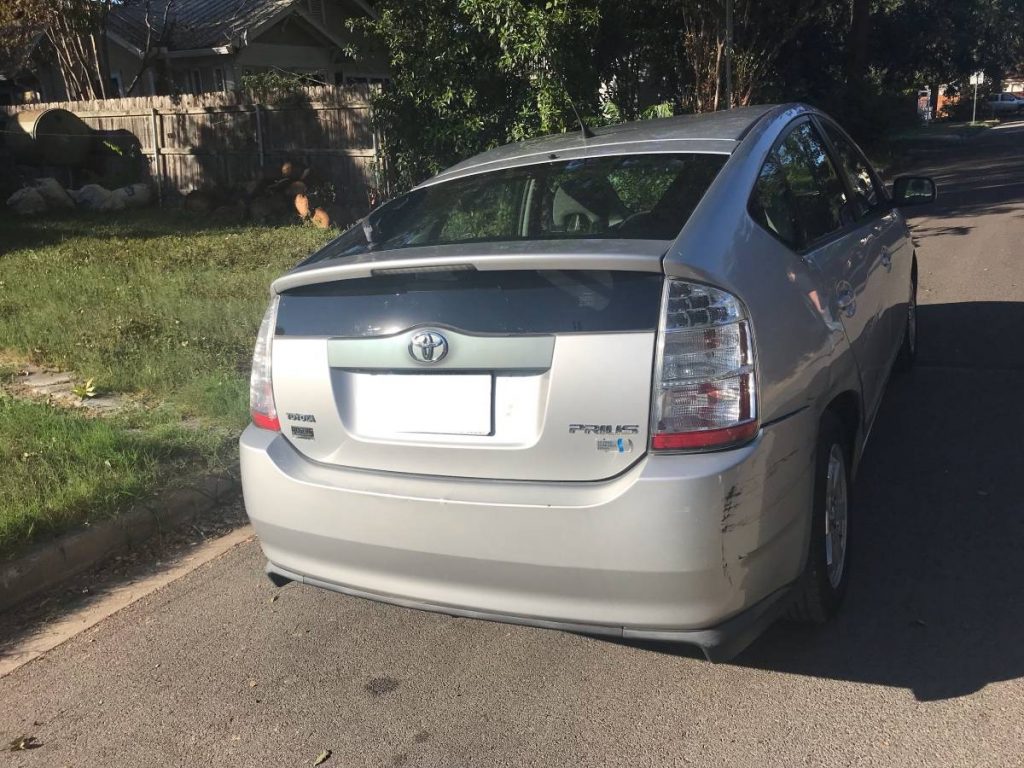 This particular Prius has a big red warning light on the dash, and one thing that it has in common with regular cars is that red lights are bad. How bad? Opinions vary, but it could mean the battery needs “reconditioning” (deep discharging and recharging to gain back its capacity) or partial or full replacement. Opinions also vary on whether this is a do-it-yourself proposition, but none of the options sound cheap. However, the seller insists that it drives fine at the moment. You pays your money, you takes your chances, I guess. 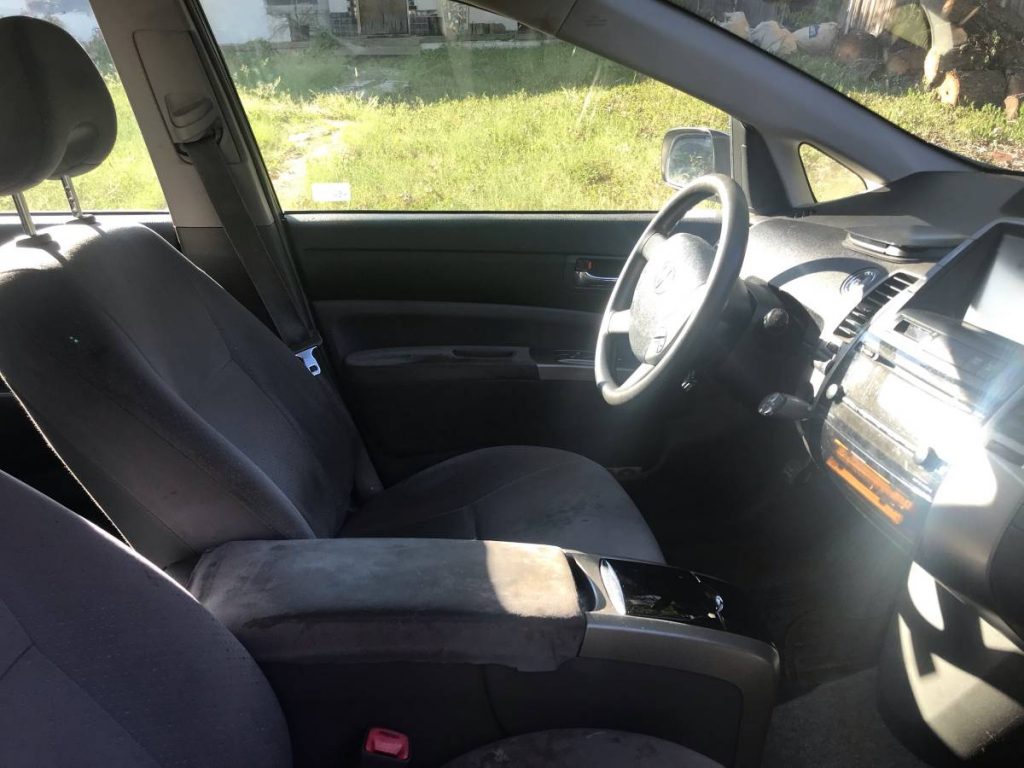 Apart from the “Triangle of Death” (as the warning light is colloquially known), this looks like a 200,000 mile Toyota: grubby but basically fine. The catalytic converter has recently been replaced (and hopefully shielded against theft), and the tires are newish. There are some dents and scrapes along one side, which I guess makes this one a “Battle Damaged” X-Wing fighter. 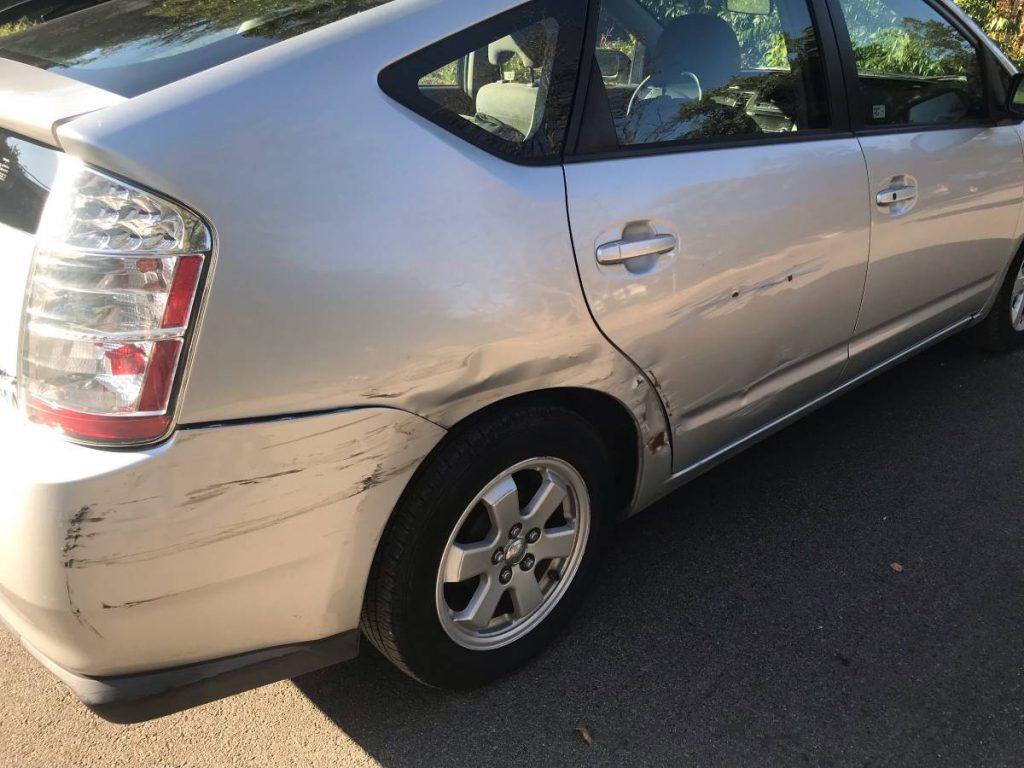 This generation of Prius really is a nice, if uninspiring, way to get around. But are cheap ones like this going to be worth the trouble to keep going? 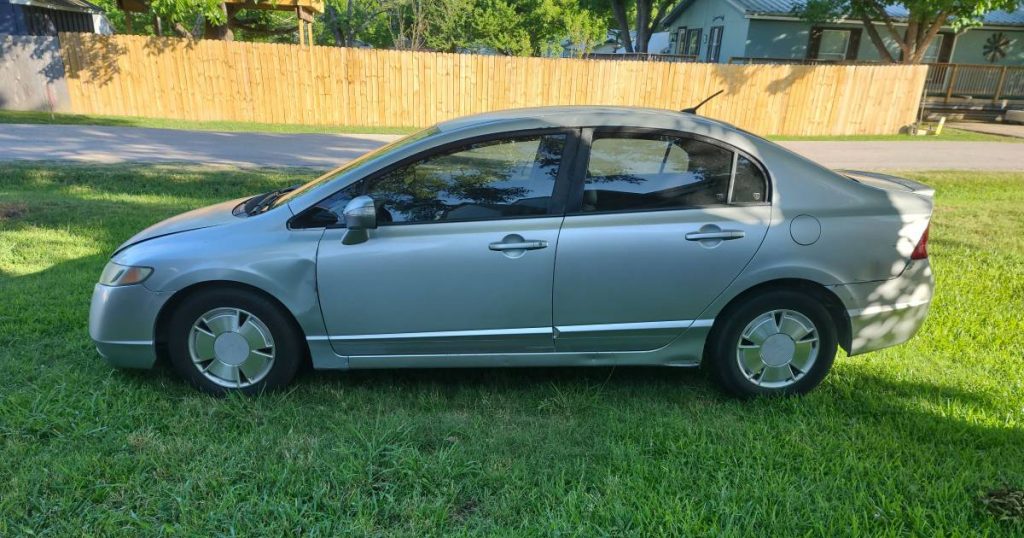 Runs/drives? Yes, but has dead cells in the battery pack

Honda’s hybrid system, as I understand it, is nowhere near as complicated or weird. It uses a small gasoline engine, with an electric motor between it and the transmission that also acts as a generator to charge a high-voltage battery (and alternator to charge the 12V battery). Previous generations of Honda hybrids were available with manual gearboxes, but this second-generation of Civic Hybrid only came with a CVT. The motor acts as a helper, not a counterpart, to the engine, offering a boost to the tiny engine’s meager power output. Because of this arrangement, even if the high-voltage battery is completely toast, the car becomes basically a really underpowered normal Civic, insetad of a high-tech lawn ornament like a Prius with a completely dead battery. 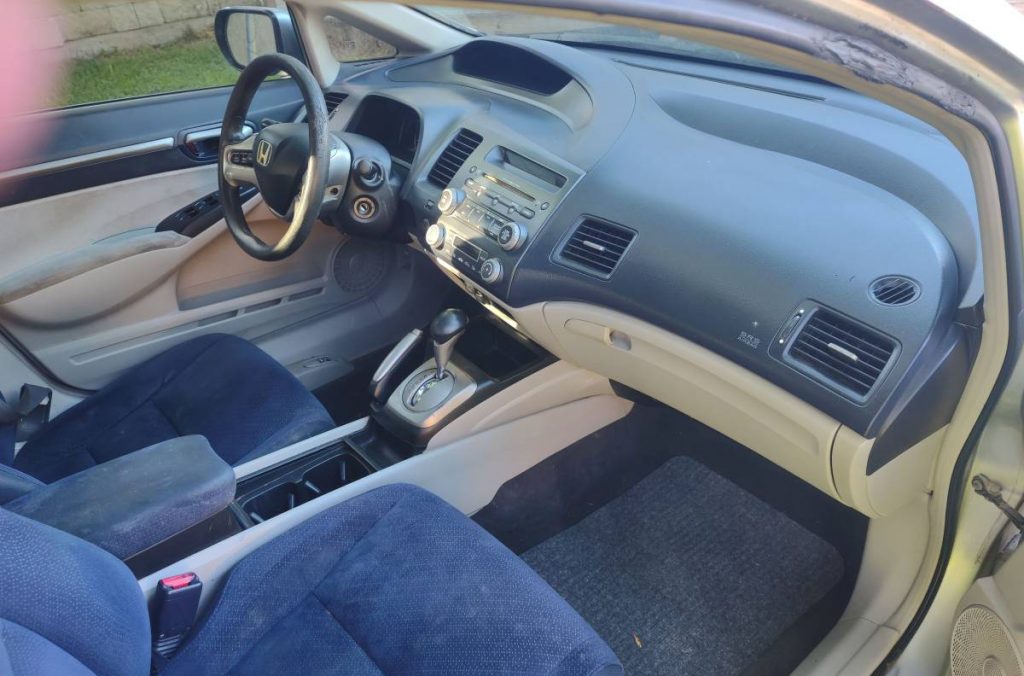 This Civic is in about the same condition as the Prius, and is also hovering around 200,000 miles. The seller says it runs and drives fine, but needs five cells replaced in the battery. How they determined this, I don’t know. The seller claims the cells are “available on eBay,” but I couldn’t find any mention of such a thing, only complete battery packs. Reconditioning services are available, however, it looks like. I understand the process of reconditioning NiMH cells from my days as an RC racer: charge the battery all the way up, then run it all the way down, a few times, to break up crystals that form inside the cells and restore their capacity. Will it help in this case? I have no idea.

This car is also a little banged-up, and it looks like someone tried to break into it; it has what look like crowbar marks along the top of the passenger’s side front door. There are some general dings and dents here and there as well. But the interior looks pretty nice. 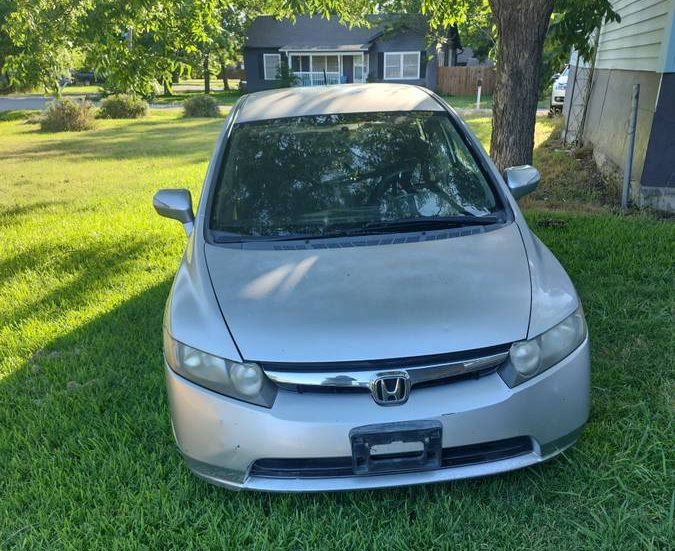 This one feels like a safer bet to the shadetree mechanic in me, simply because if there ever is a catastrophic failure of the big battery, it gets slow and ineffcient instead of dead. And the system feels more tinkerer-friendly.

It’s a brave new world, and it is finally catching up with us bottom-feeders. It’s still easy enough to avoid old hybrids and focus on strictly internal-combustion choices, but the fuel economy possibilities of hybrids are hard to ignore forever. The technology is a hell of a learning curve, but it might be worthwhile.  Where do you want to start?