For a car that is arguably one of the best documented of any car ever built, the Volkswagen Beetle has one of the murkiest, most convoluted origin stories ever, and can be told, essentially truthfully, in a surprising number of different ways. There’s the mainstream telling, where Ferdinand Porsche developed the insect-shaped, rear-engined, air-cooled Peoples’ Car to fulfill Hitler’s vision, and that’s essentially true. But also true is that the idea of a Peoples’ Car had been around for a long, long time, and the technical design originated from many sources, including Tatras designed by Hans Ledwinka and the Standard Superior of Joef Ganz and even before that from Edwin Rumpler’s mid-engined Tropfenauto designs. There’s so many parents here, but one of the earliest, most convincing, and most influential in the automotive world outside of Volkswagens has to be Bela Barenyi. Barenyi became the Beetle’s “intellectual father” (a term Volkswagen legally agreed to in 1955, even) when he was only an 18-year old student, way back in 1925. 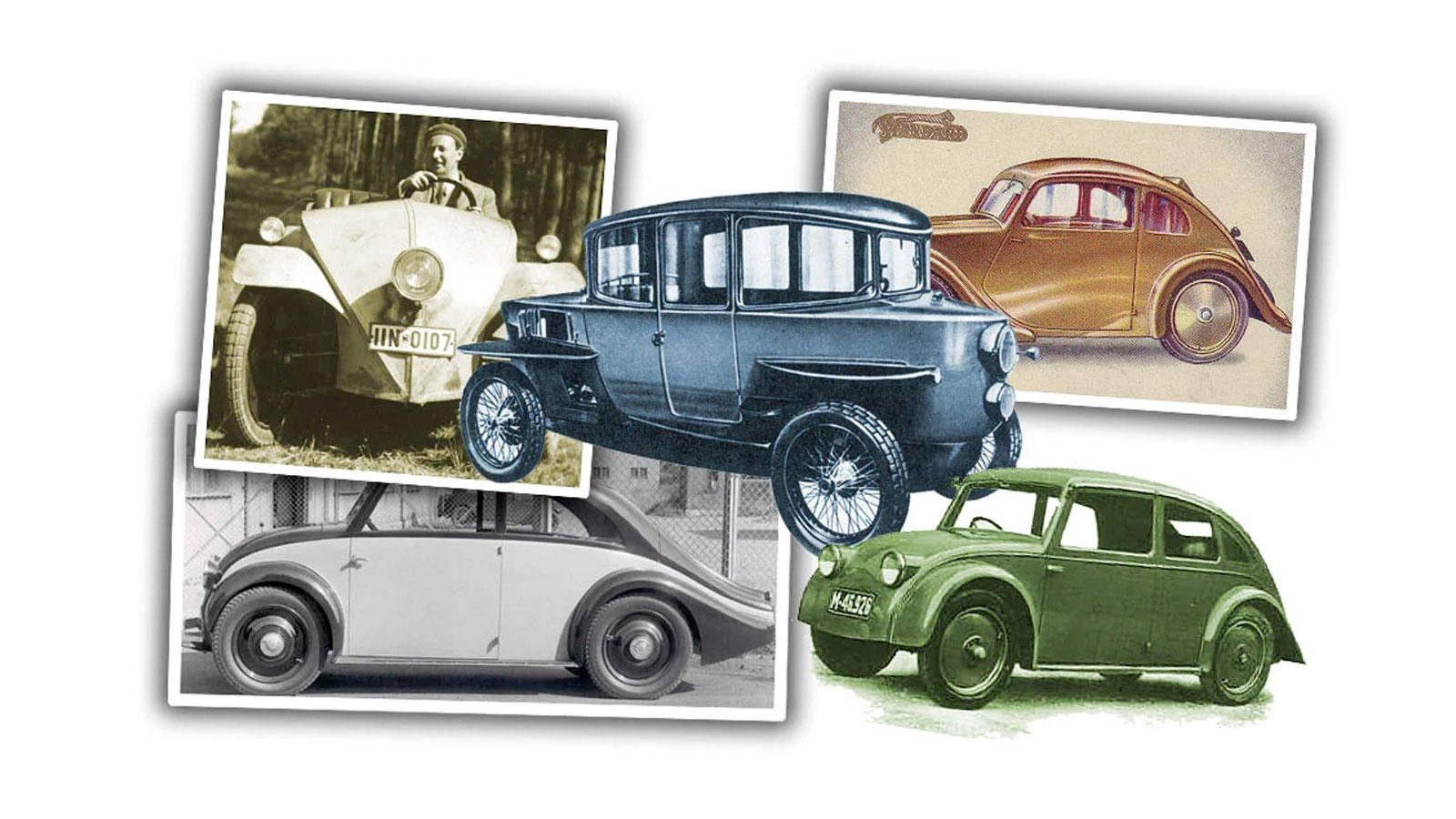 You can see some of these proto-Beetle designs up there, with Edmund Rumper’s Tropfenauto from 1921 at the center, and then going clockwise we have Josef Ganz’ Standard Superior from 1933, then Ledwinka’s Tatra V570 prototype from 1931, then DKW’s rear-engined streamliner prototype of 1933, then Josef Ganz again there in the 1930 Ardie-Ganz car, and, of course there were some others, all around the early-to-mid 1930s and having some basic traits like a rear-mounted engine and a curvy, beetle-ish body.

I want to talk about Barenyi because I feel like he often doesn’t get the recognition he deserves in the context of the origins of the Volkswagen, and it’s not all because of nefarious reasons. It’s because the dude was just too damn good at coming up with important automotive innovations, especially in the field of safety. While working for Mercedes-Benz, Barenyi developed the idea of crumple zones, patented the collapsable steering column, and was largely responsible for developing the concepts of passive safety that make cars so remarkably safe today.

Look, Mercedes even made a video about him and his safety developments:

The man played a huge role in automotive safety, and that’s generally what he’s remembered for today, with good reason, because you can’t really overstate how important this work is, since it’s all about, you know, not being dead.

But I want to look at what is really a footnote in Barenyi’s work, a couple of sketches he did while still a student at the Viennese Technical College of Mechanical and Electrical Engineering, sketches he did around 1925. The first one that caught my eye was of this chassis for a peoples’ car design: 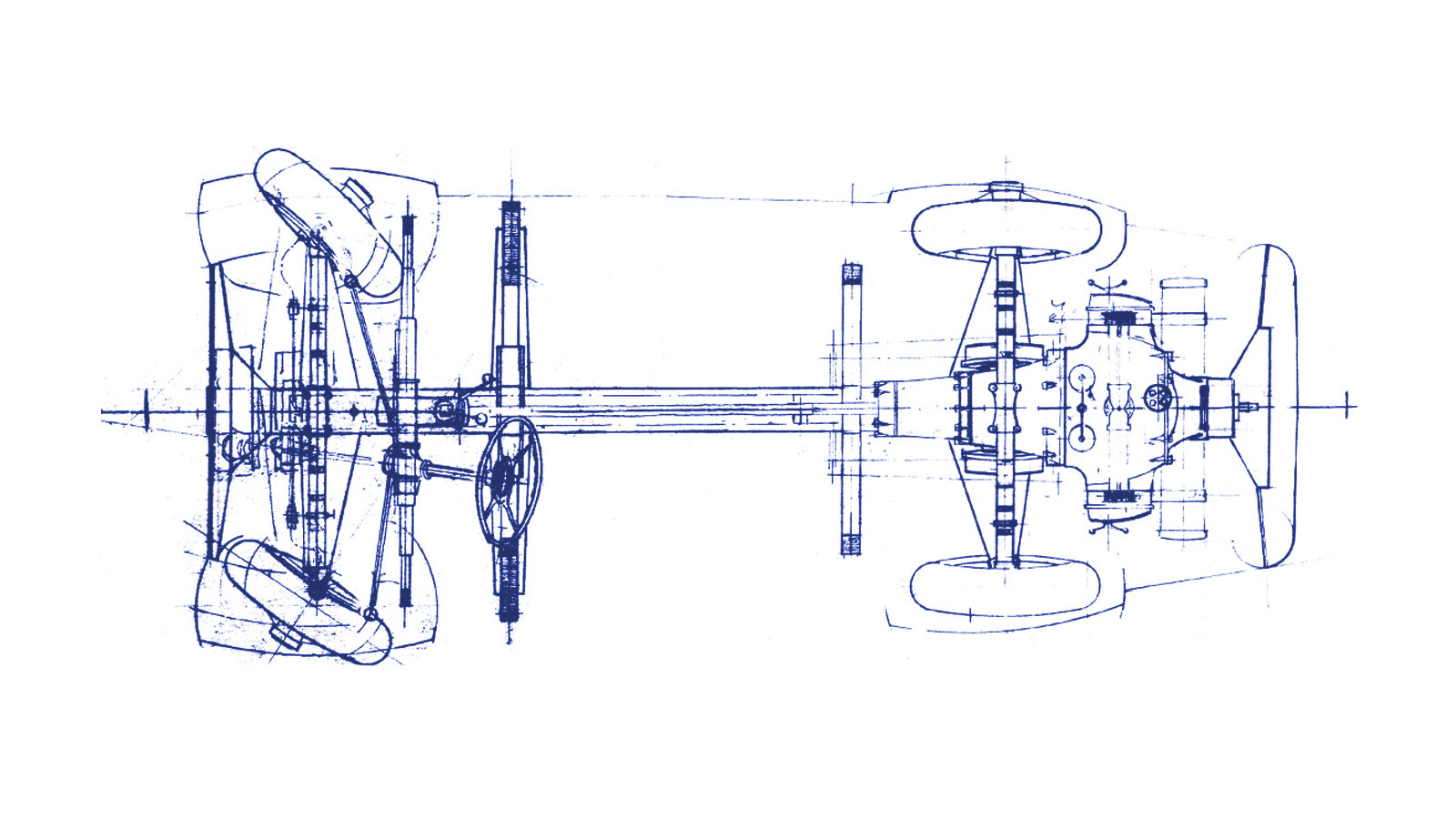 This chassis design is incredible because of how close it is to the finalized Volkswagen chassis that finished development about 13 years later, in 1938. All the key qualities are there: a backbone chassis design, transverse suspension springing (here leaf springs instead of torsion bars), a horizontally-opposed, air-cooled engine mounted just aft of the rear wheels, and connected to a transaxle that powers the rear wheels via a swing-axle design–it’s all there. Here, look at them both together: 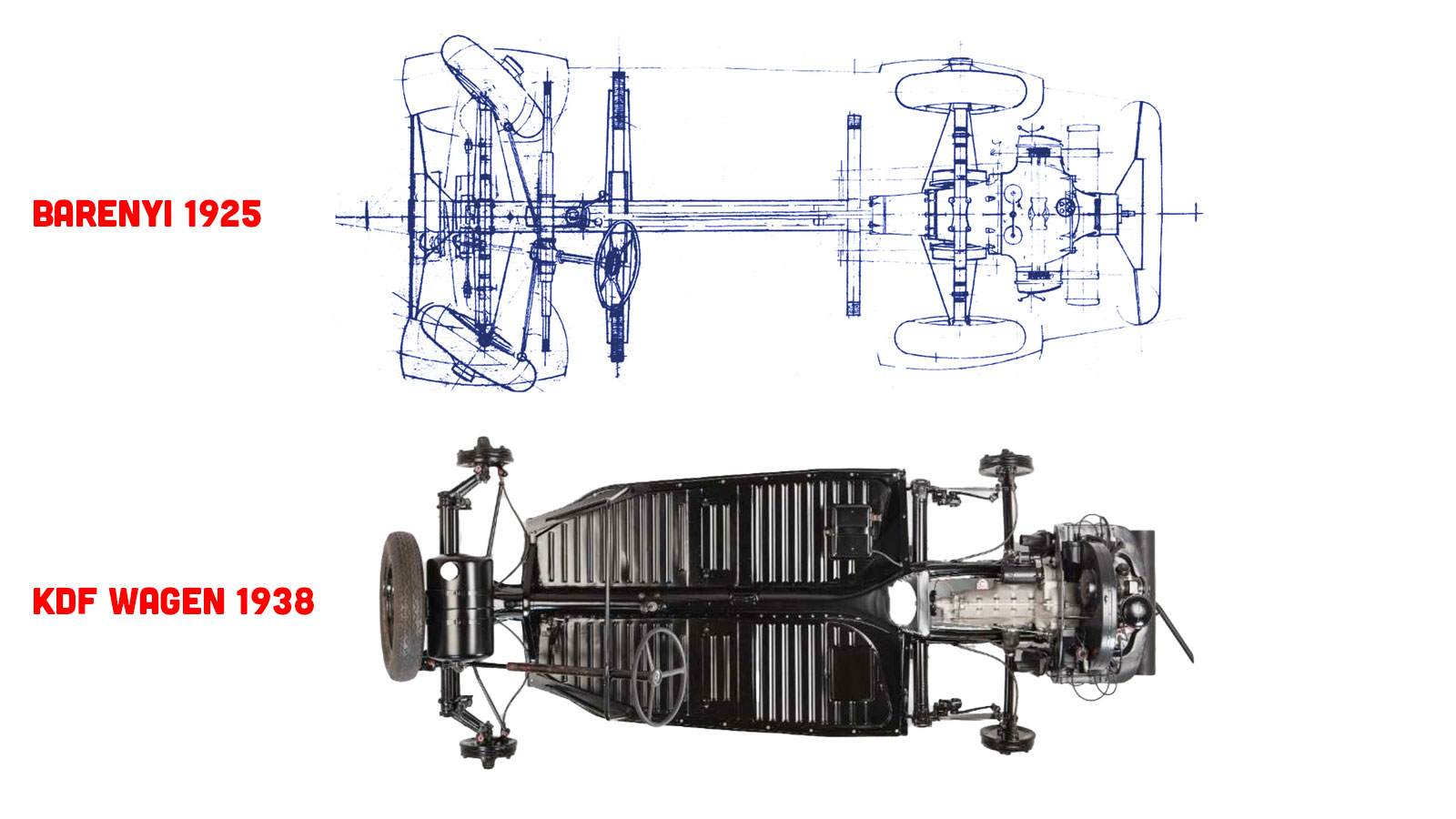 Aside from the type of suspension springing used and the use of what look to be inboard drum brakes at the rear, the similarities of this 18-year old kid’s imagination to what would become the largest-selling single-platform vehicle of all time are absolutely remarkable. And, remember, this drawing pre-dates rear-engined designs from Mercedes-Benz, Ledwinka/Tatra, Ganz, DKW, NSU, just about everyone.

And, the incredible prescience doesn’t stop at the chassis; Barenyi’s overall design for the body and layout of the car are also remarkably like what would end up in production from 1938 to 2003, at VW factories all over the world: 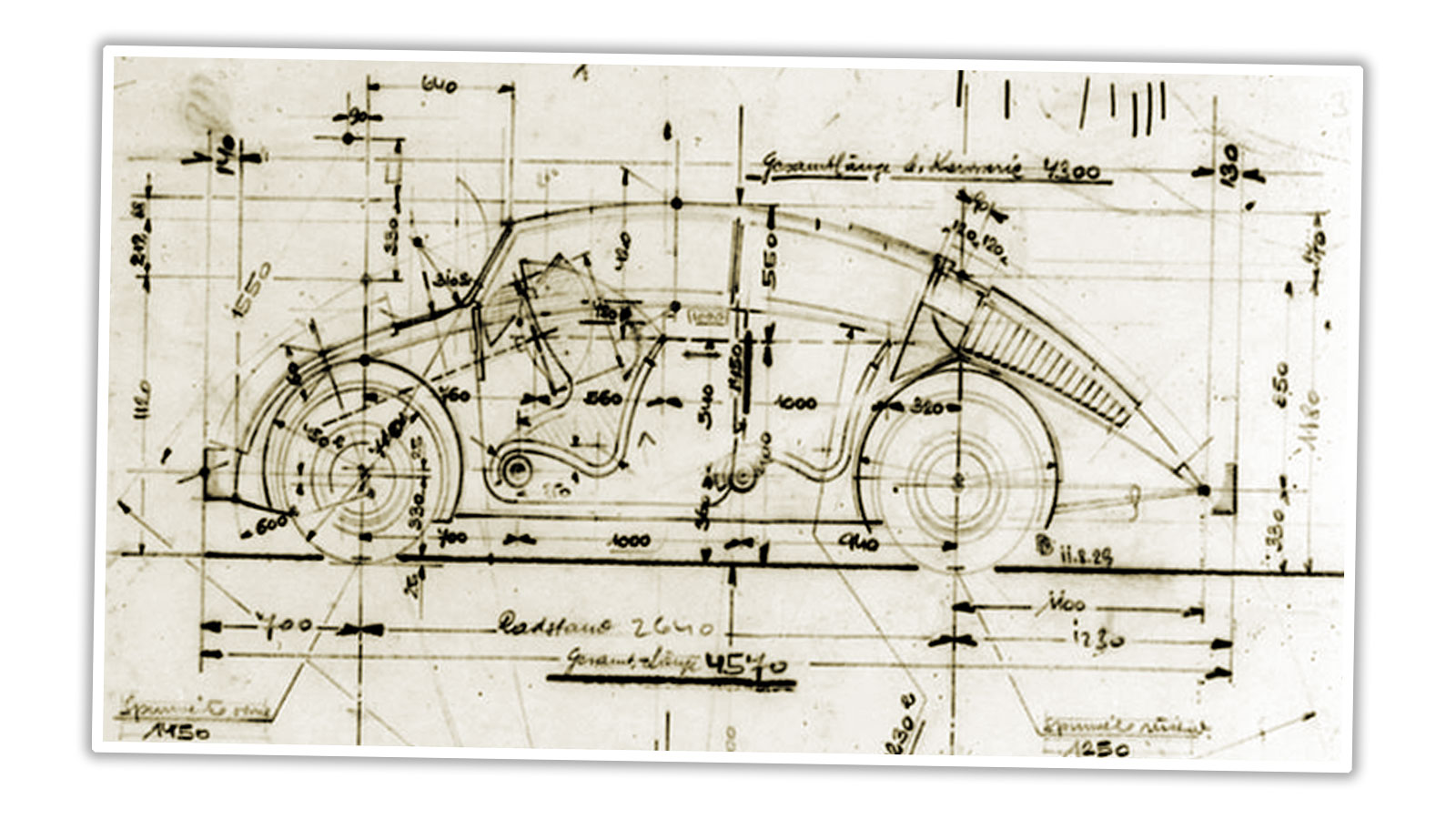 I mean, look at that: it’s a Beetle. Of course, it’s not exactly the same as what the final Beetle design would be when finalized in 1938 – the fuel tank appears to be behind the rear seat, for example, there’s less accommodation for cargo and a spare tire up front, and so on, but it’s still the same basic idea, just in 1925.

For comparison, here’s one of Porsche’s first attempts to design a volkswagen, the Porsche Type 12, developed for the German motorcycle company Zündapp in 1931: 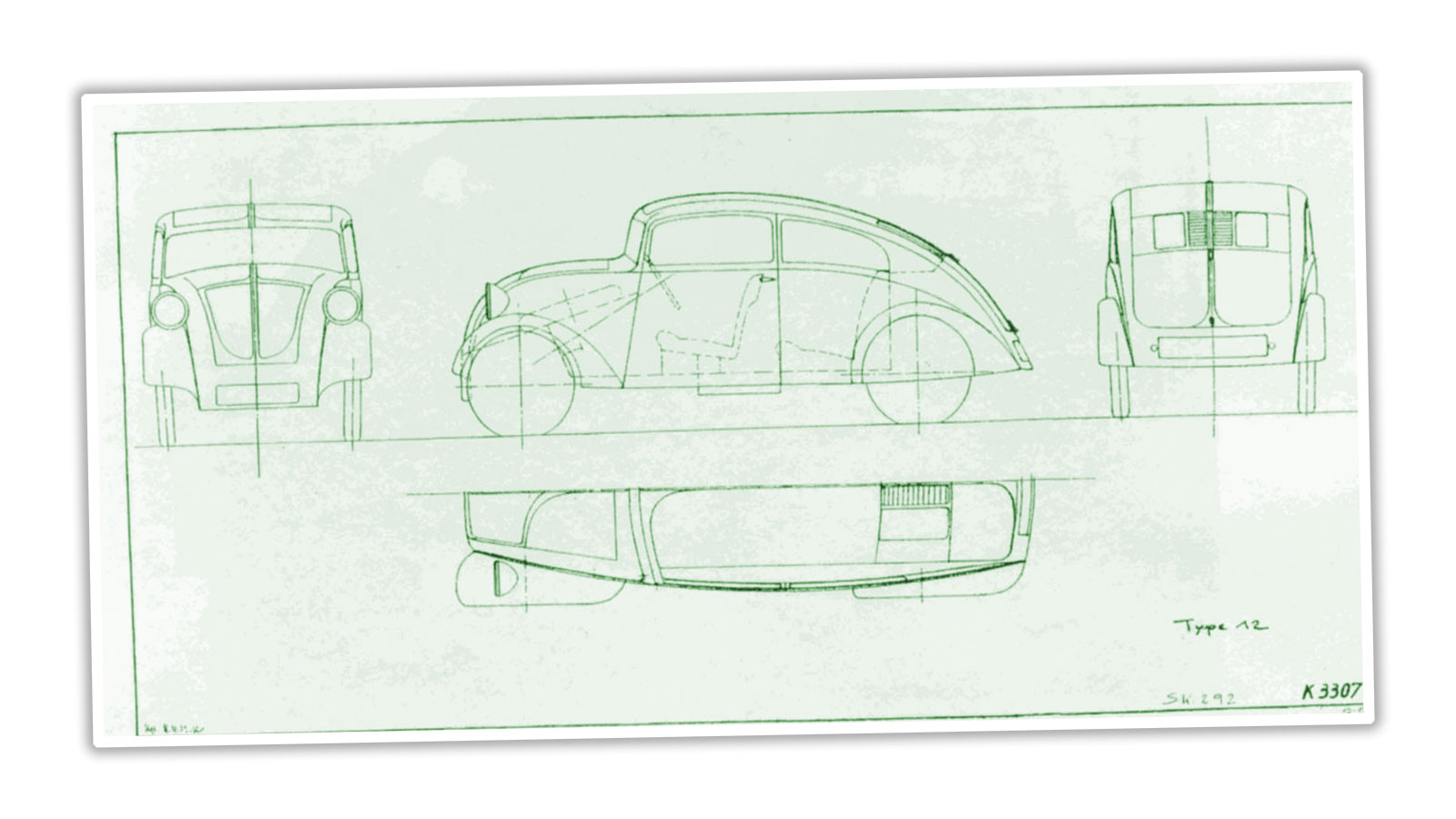 In fact, Barenyi’s 1925 drawing is actually closer to the final Volkswagen, because the Type 12 had a peculiar five-cylinder radial engine, something that is usually reported as being demanded by Zündapp and against Porsche’s wishes, but I’ve found sources that claim the opposite, too. Barenyi’s used a boxer-type opposed engine, just like the final VW would.

I’m not accusing anyone of stealing any ideas here or anything, because that would be nearly impossible to prove; could Porsche have seen drawings from a teenaged student from six years before he designed the Type 12? Maybe? I have no idea. What I do know is that there were many smart engineers playing with the same basic set of ideas for a cheap, usable rear-engined peoples’ cars in this era, Porsche, Ledwinka, Ganz, Rumpler, Tjaarda, Jaray – there’s a big list, and it’s best to think of all of their ideas as ingredients in a huge cauldron of chowder that would eventually boil down into the Beetle and  other rear-engined mass-market cars to follow.

What I definitely can say, however, is that of all of these early pioneers, I think Barenyi’s designs were among the very earliest, and were among the closest to what the eventual final design would be. That, along with the fact that Barenyi was really just a kid at the time, and then factoring in his incredibly important career in automotive design afterwards, makes me think that this is a person who deserves a lot more recognition than he usually gets, at least in America.

I think Bela Barenyi should be as well-known as Ferdinand Porsche, so, if you weren’t familiar with Barenyi before, I’d suggest printing this article out and shoving it in the faces of at least a dozen or so people. They’ll thank you.

I'm a co-founder of the Autopian, the site you're on RIGHT NOW! I'm here to talk to you about taillights until you cry and beg me to stop, which I absolutely will not. Sorry. Hug? Also, David's friend.
Read All My Posts »
PrevPreviousThe Legendary Volkswagen Phaeton Has A Second-Generation, And Just One Of Them Exists
NextGeneral Motors Made Another Hot Pontiac Vibe One-Off That You Can Own, But Only Sorta DriveNext