Facebook-f Twitter Instagram Rss
Menu
Menu
Home » General Motors Made Another Hot Pontiac Vibe One-Off That You Can Own, But Only Sorta Drive

General Motors Made Another Hot Pontiac Vibe One-Off That You Can Own, But Only Sorta Drive 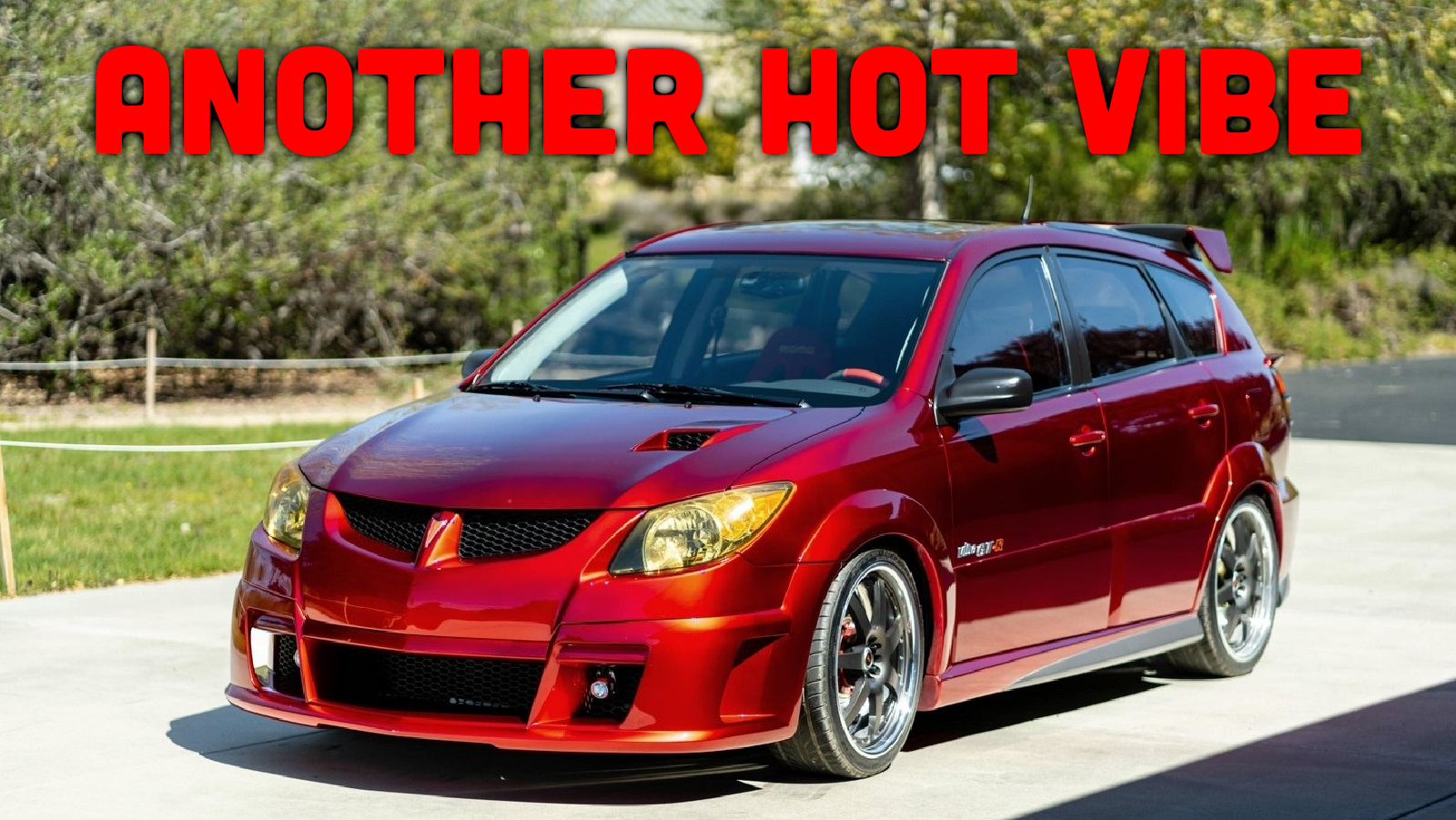 A couple of weeks ago, my colleague Thomas wrote about the excellent souped up one-off Pontiac Vibe GXP concept that popped up for sale. That car served as an example for how General Motors was considering some wild ideas for spicing up its lineup. Now, incredibly, another hot Vibe concept has shown up for sale, and this one is even more out there. The Pontiac Vibe GT-R concept was a faster Vibe for lovers of tuner culture.

General Motors has a history of rolling out rather fantastic concepts that sadly, often never reach production. How many times have we seen a beautiful Cadillac concept over the years just to be saddened to see it never reach production? Remember the Buick Avista? Or the angular Northstar V12-powered Cadillac Cien supercar?

Those cars exist only as one-off concept cars and as dreams living rent-free in your head.

But the General hasn’t given just supercars and grand tourers the one-off concept treatment. Even the humble Vibe got a couple of cool concepts. Thomas already showed you one of them: the supercharged Pontiac Vibe GXP. But a year before that car the General gave the public another spicy Vibe concept.

As MotorTrend notes, GM had been watching enthusiasts take their regular cars and slam them to the ground, adding in aftermarket wheels, body kits, interiors, sound systems, and more. James Hunter, then Pontiac Vibe Assistant Product Manager, saw the Vibe as an alternative tuner car to Honda and Mitsubishi. That may sound silly on the surface, but remember, the GM NUMMI assembly-built Vibe was a joint venture with Toyota – it was essentially a re-skinned Toyota Matrix, remember – and traces its lineage to the Corolla.

To show what a Vibe could look like with parts ordered from GM’s accessory catalog, General Motors Service Parts Operations kitted up two Vibes for the 2001 SEMA Show. One was the Pontiac Vibe Fx, an orange Vibe AWD with a body kit and a flip-down DVD player for backseat passengers. The other was this GT-R. 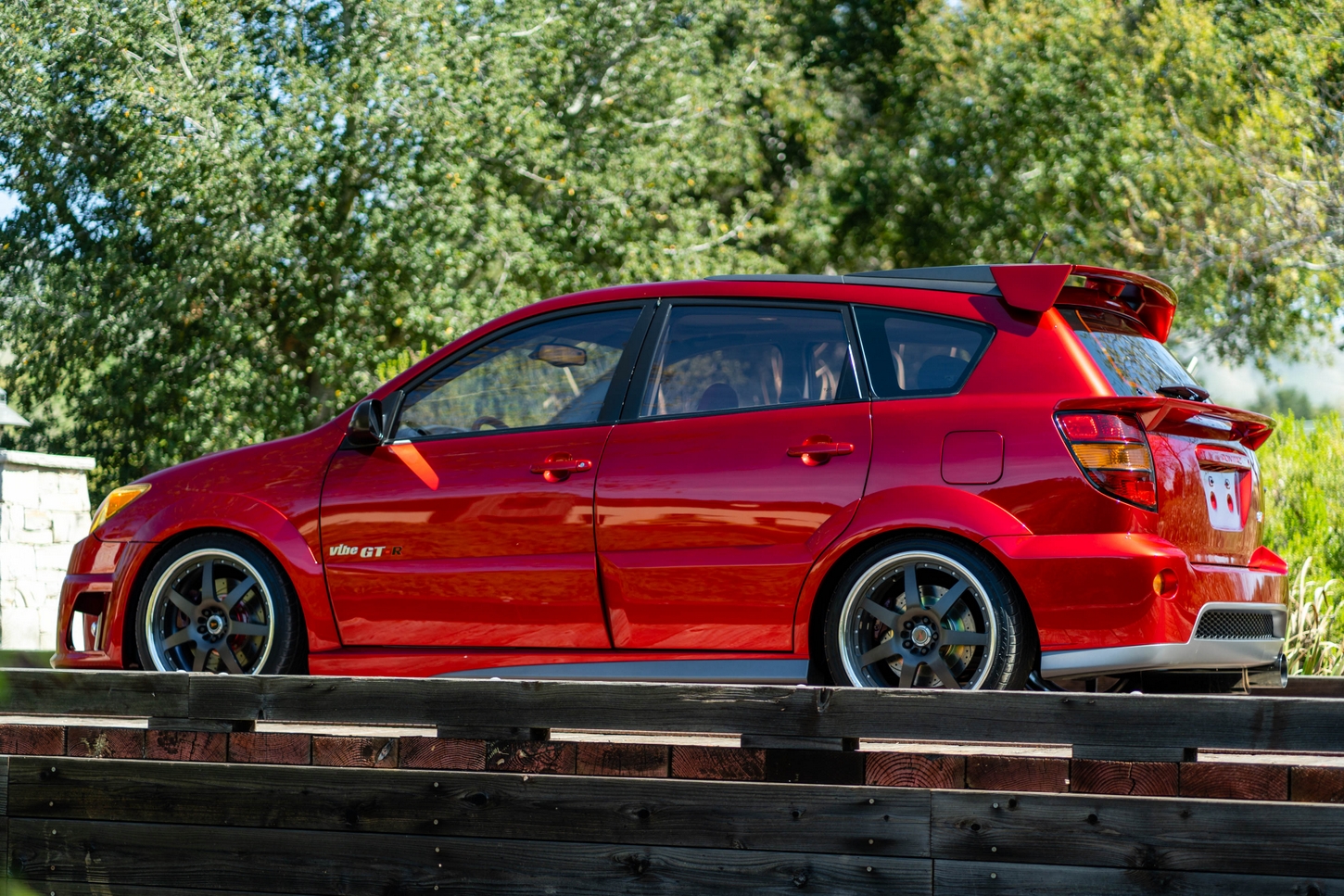 As the name would suggest, this car is based on the Vibe GT, but modded to be more.

On the outside, the GT-R features a “Street Racer” body kit, a functional hood scoop, tinted headlights, 19-inch Ro_Ja Formula 7 wheels, Ground Control/Eibach ERS adjustable suspension, larger brakes, and more. It really looks like something that could have been in The Fast And The Furious.

Inside, the front seats of the regular GT are tossed out and replaced with MOMO Street Racer seats. 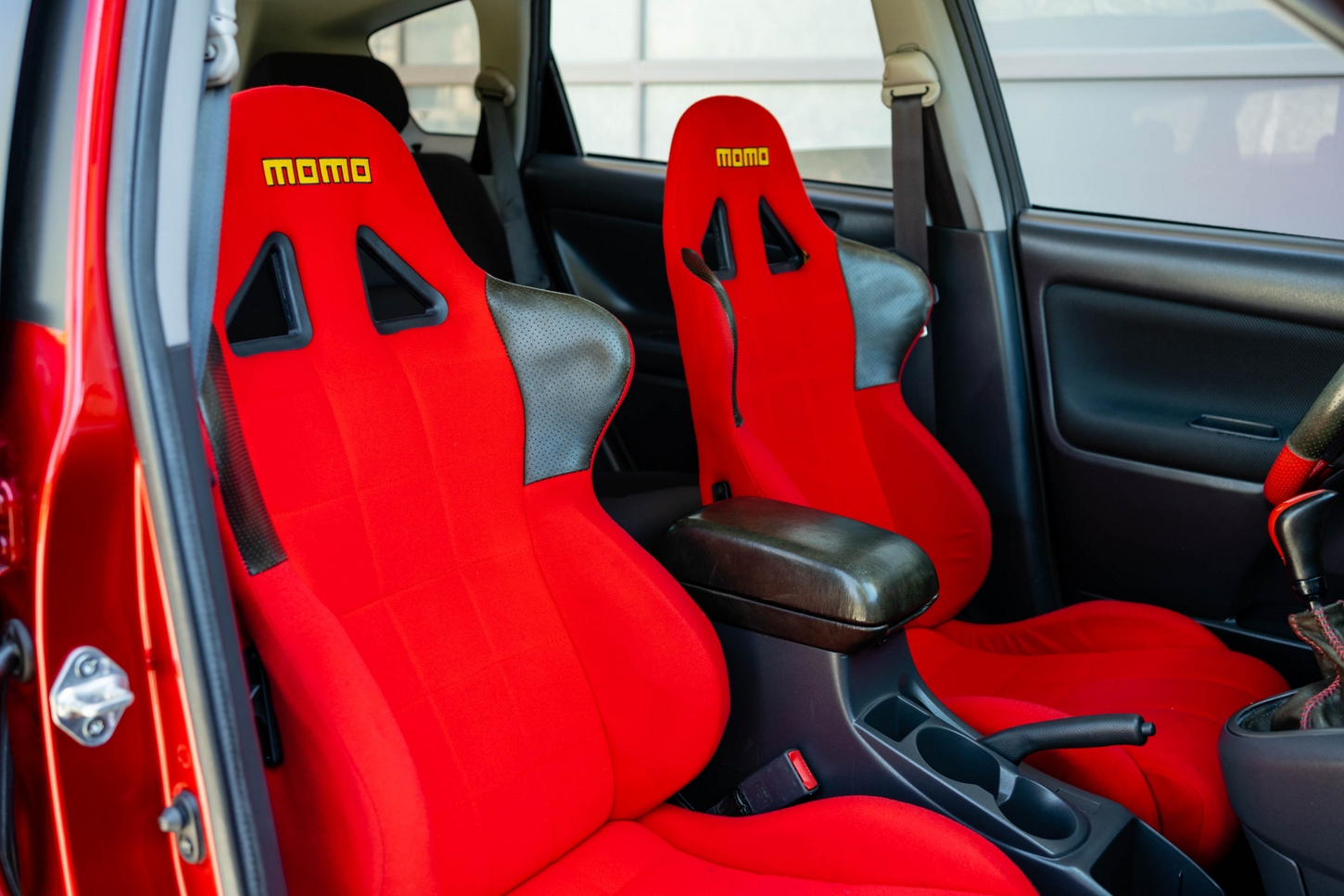 The sill plates and pedals also get a MOMO treatment and the steering wheel gets wrapped into something more sporty. At the center of the helm is the stock shift knob for the GT’s six-speed manual transmission.

And since we’re talking about a car from the early 2000s, of course there’s a custom sound system in it. Out back is a removable audio enclosure with an air-cooled Kenwood Excelon KAC-X201T amplifier and a 10-inch subwoofer. Music comes out of a Kenwood head unit. 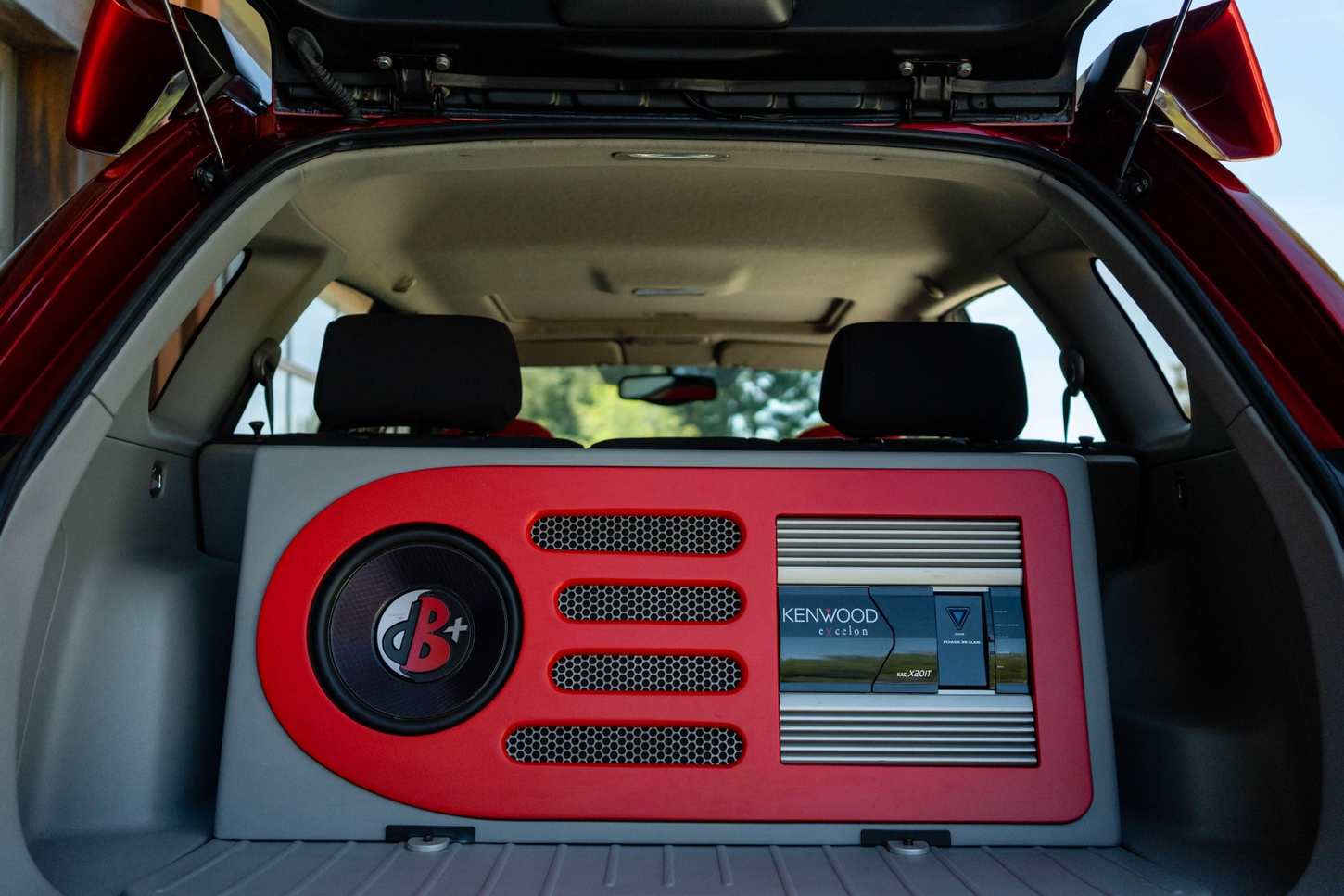 This Vibe was also more powerful than stock. A stock Vibe GT makes 180 horsepower and 130 lb-ft torque with its 2ZZ-GE four. This one is making 190 horses with torque apparently unchanged at 130 lb-ft. The modest power increase is said to come from the air induction scoop and a different exhaust system.

Still, unlike the GXP, at least the GT-R makes more horsepower than the GT. 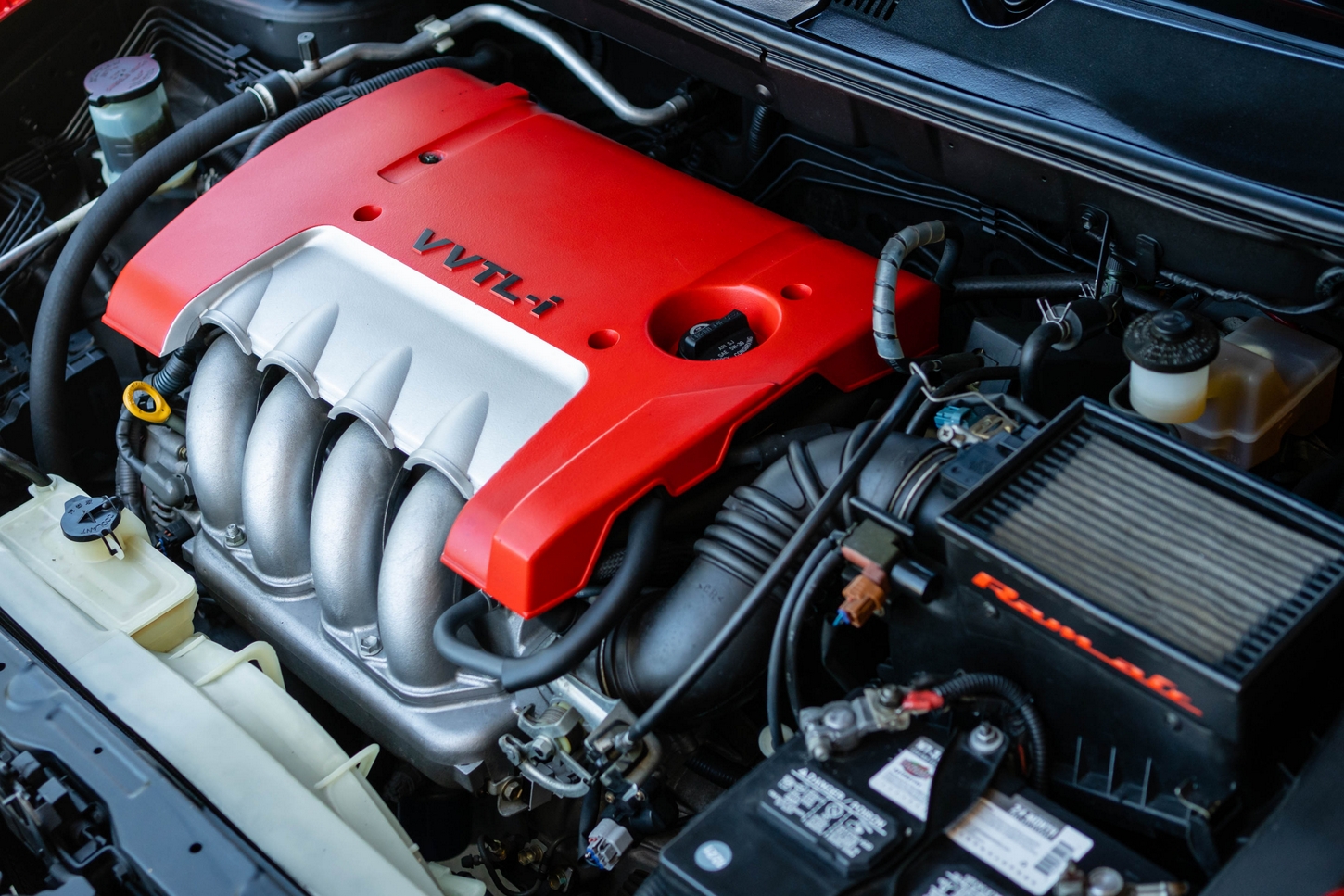 The parts used to build the Vibe GT-R were a mix of off-of-the-shelf aftermarket parts and parts that were supposed to be specific to the Vibe, in consideration to be sold through GM Accessories. Unfortunately, while you could score some MOMO Street Racer seats and Ro_Ja Formula 7 wheels, the Street Racer body kit, air induction system, and other Vibe-specific parts seemingly never reached GM’s accessory catalog.

I searched archived pages of Pontiac’s site until its demise and appearance packages for the Vibe were more tame than you see here. 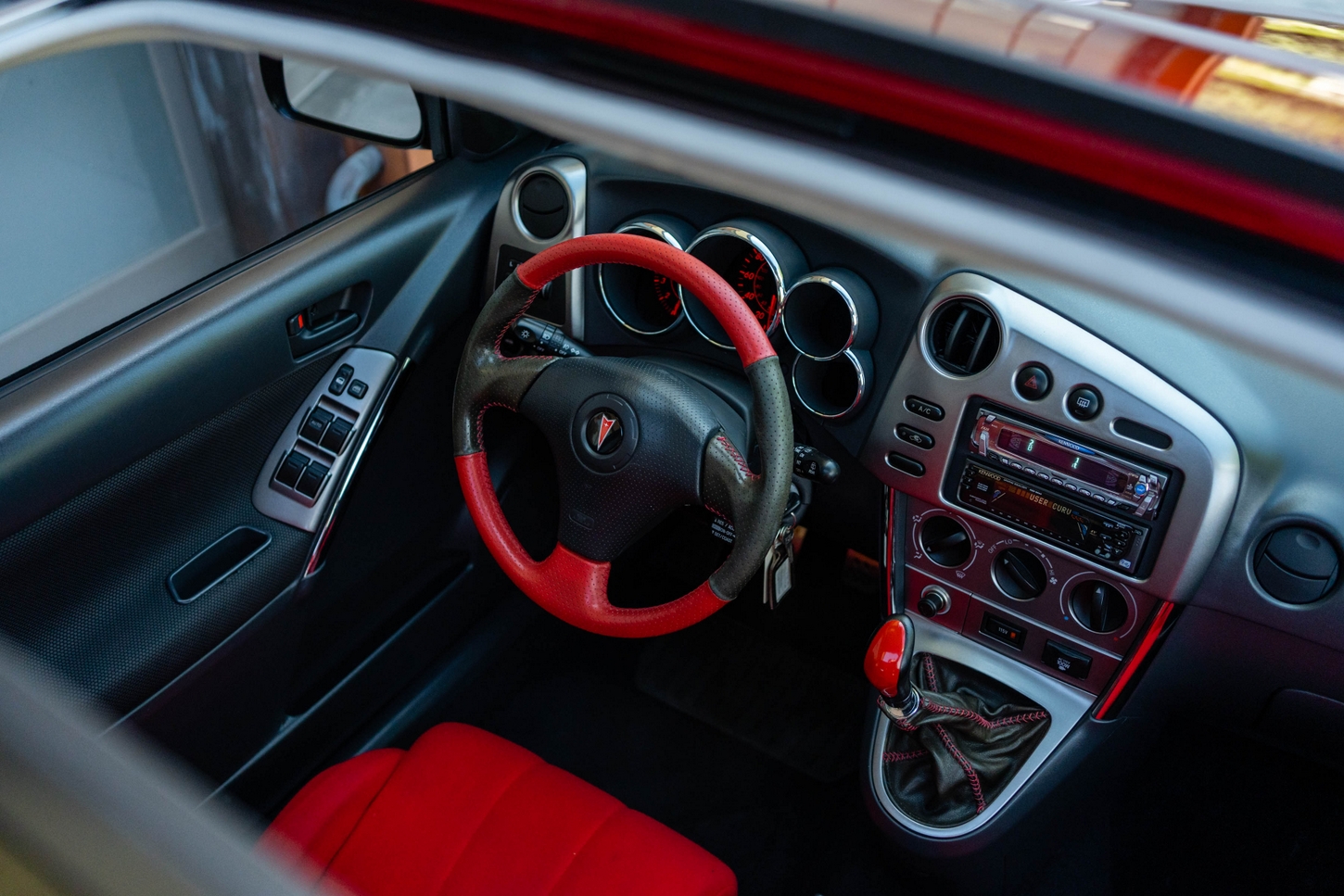 And, as it turns out, enthusiasts were saddened that these sweet parts never made it to the GM Accessories catalog.

So, what you’re getting with this Bring A Trailer auction is a Vibe outfitted with custom, irreplaceable parts. It has all of 800 miles on its odometer, too, making it probably one of the lowest-mile Vibes on the planet. Though, the low mileage isn’t surprising considering that it doesn’t have a full 17-digit VIN. 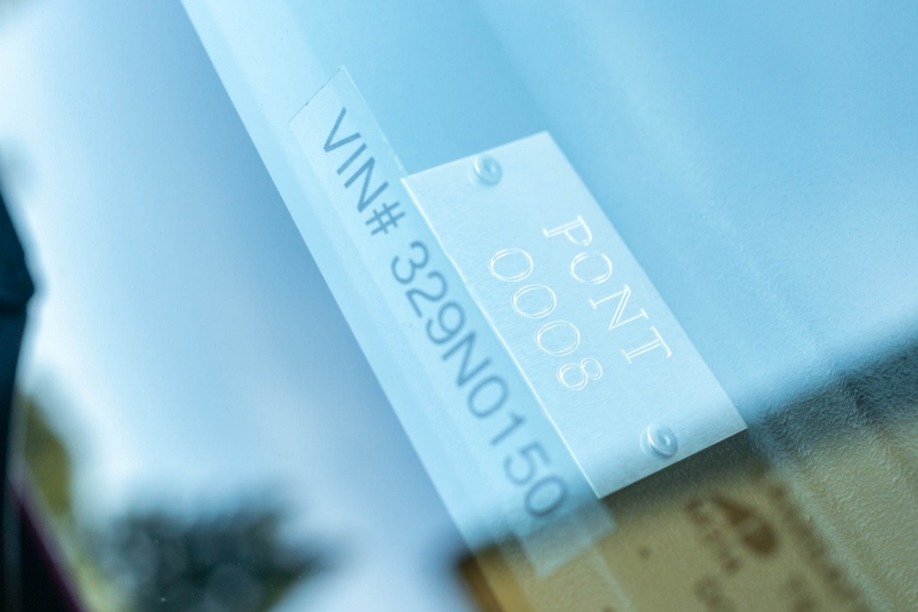 Yep, unfortunately, this car isn’t road legal. It doesn’t even have a title. Thus, at least some of this car’s past has been spent on a track. And the selling dealership managed to add 150 miles to the odometer since getting the car in 2009. I wonder how a car like this accumulates even 800 miles.

The good news is that this car is still based on a production car and it does have a short VIN. Some looser states might slap plates on this bad boy. Hopefully, someone picks up this obscure piece of GM history and has some fun with it. Perhaps unsurprising given VIN situation, bids are at just $7,654 with three days to go on Bring A Trailer.

(All image credits To Bring A Trailer seller bigbuckaroo47 unless otherwise specified.)

Mercedes is a lifelong fan of all things powered by an engine. When she isn't driving one of her five Smart Fortwos or her 14 other vehicles she could be found in the cockpit of a Cessna 172 or perhaps swimming in any body of water that she could find. She also has a deep love for buses of all kinds. Please send her buses. mercedes@theautopian.com Instagram: @mistymotors Twitter: @Miss_Mercedes30 Facebook.com/neonspinnazz
Read All My Posts »
PrevPreviousThe “Intellectual Father” Of The Volkswagen Beetle Was An 18-Year Old Student
NextCold Start: Is This Picture Evidence In Some Cold Case?Next