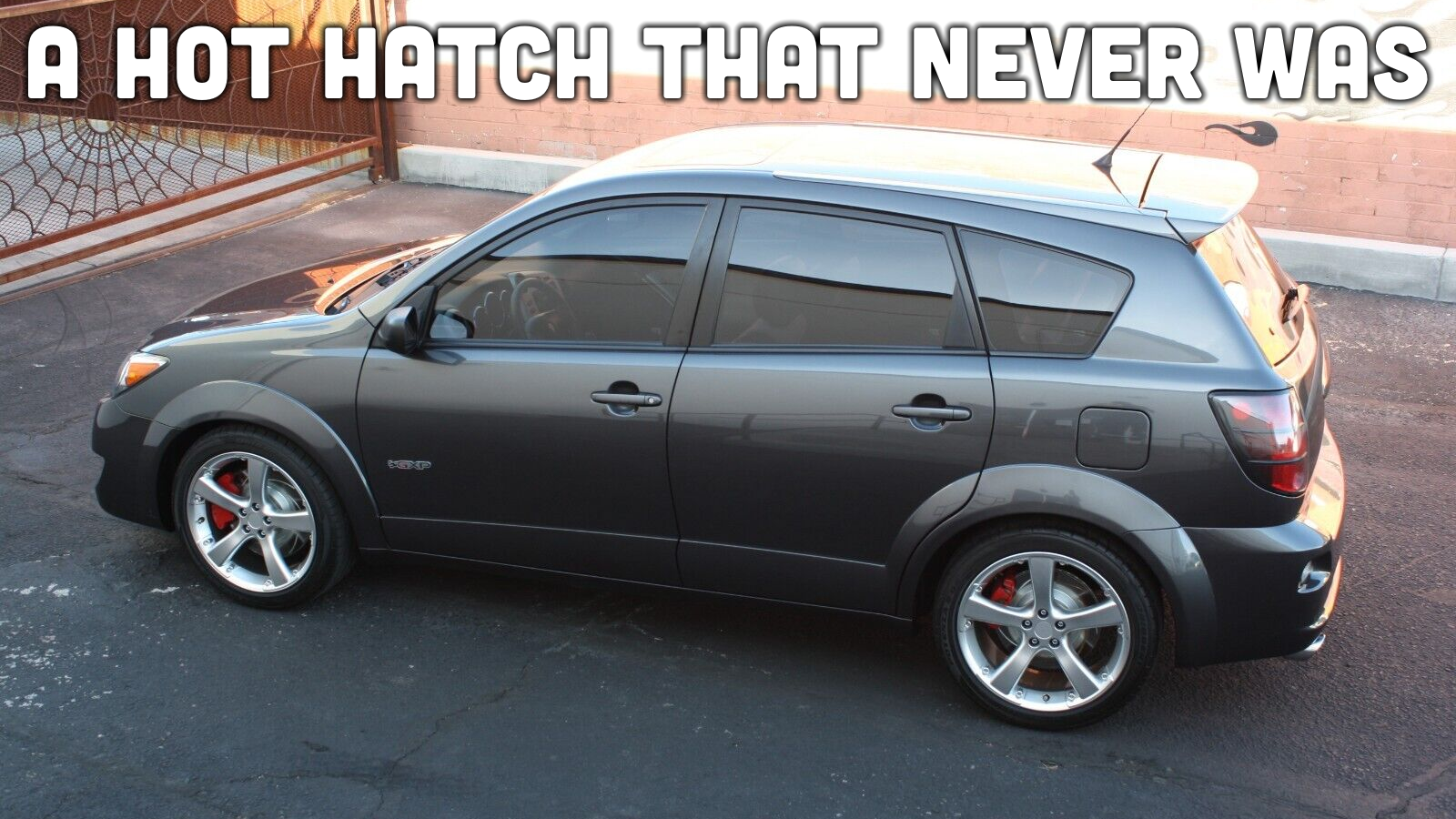 You just have to love GM’s pre-bankruptcy approach of throwing everything at the wall and seeing what stuck. It produced some absolutely groundbreaking ideas in production vehicles like Quadrasteer, night vision, telematics, and integrated coolers, but some even more interesting ideas were tried out, then discarded on the cutting room floor. The Pontiac Vibe GXP concept is one of those latter ideas, and it’s currently up for sale on eBay in Tucson, A.Z.

Remember GXP? Pontiac’s special sauce treatment for vehicles as varied as the G8 tire-frying wonder from down under and the Torrent crossover? More power, more rubber, more brakes, bigger wheels. The GXP line may have spawned the most ridiculous whale tail ever to grace a midsize coupe, but it also was a high water mark for retail-grade performance cars. Take the Grand Prix GXP for example. While it never quite shed the Grand-means-big-and-Prix-means-pricks, Juggalos-crushing-Faygo-while-screaming-down-the-Lodge image of its GTP sibling, the Grand Prix GXP was a great exercise in trying to make a car do stuff it was never designed for. Need more power? Transversely-mounted 5.3-liter LS V8. Hideous understeer? Reverse staggered tires with wider rubber up front. An interior as dour as your middle school principal? Give it a G meter. While the GXP treatment did transform the Grand Prix into a quick, gearbox-nuking monster, it never made it to the lower end of the Pontiac range.

A strange thing, considering how it very much could have. See, the Pontiac Vibe was largely a restyled Toyota Matrix built in GM’s NUMMI assembly plant, so it wasn’t exactly a cheaply-built snoozefest. It had proper utility, strong reliability, sharp styling, and an available 180-horsepower engine that wailed to 8,200 rpm. Unlike the Sunfire, the Vibe was actually exciting, and Pontiac wanted to capitalize on that. With that in mind, Pontiac told GM’s performance division to get to work on a functional Vibe GXP prototype.

Pontiac rolled out the Vibe GXP Concept at the 2002 SEMA show, right at the height of underglow and squash-scented air fresheners. Unlike most wild show cars, the Vibe GXP appeared remarkably restrained. A relatively subtle set of new bumpers, some simple five-spoke forged wheels, a nice little spoiler, and red brake calipers were paired with with a deep gray paint job Pontiac called Shadow Black Tri-Coat. Honestly, a bit of color-keying, removing the roof rack, and slapping on a classy set of wheels made the Vibe GXP a really handsome little hatchback.

On the inside, things change even less. Obviously the biggest interior change is the upholstery, a blend of leather seat bolsters, gray suede-like inserts, and the same gray suede-like material on the door cards. Honestly, it classes up the joint a touch, although I’m not sure if gray faux-suede has aged brilliantly. What has aged well though are the strategic metal accents scattered about. Alloy pedals always bring a touch of childlike joy, so I’m pleased to see them here. Of equal joy, special sill plates really do offer a fun sense of occasion. Otherwise, the interior of the Vibe GXP is identical to that of a production Vibe, right down to the rather annoying all-red gauges on early cars. Sure, they looked cool, but legibility wasn’t brilliant.

While the Vibe GXP certainly had tasteful aesthetics on lock, its main party piece was a roots-style supercharger bolted to the front of the engine. Cranking out 7.5 psi of boost and paired with a sports exhaust system, it seemed like just the thing to perk the Vibe up a bit. Unfortunately, Pontiac strapped the supercharger to the wrong engine. While Vibe GTs got Toyota’s screaming 2ZZ-GE four-cylinder engine, base models with the economy-minded 1ZZ-FE 1.8-liter inline-four had a five-speed. A discerning enthusiast can spot the 1ZZ-FE engine in the Vibe GXP by the rectangular relief in its valve cover and its pairing with a five-speed manual gearbox.

Still, Pontiac claimed up to a 35 percent increase in power and torque over the base Vibe. That base model made 130 horsepower and 125 lb.-ft. of torque, so it’s reasonable to assume that the Vibe GXP made around 175 horsepower and 168 lb.-ft. of torque. Hang on a second, didn’t the Vibe GT make 180 horsepower? Indeed it did, although it only made 130 lb-ft of peak torque at a high 6,800 rpm. Still, a GXP model making less power than a lower trim is a bit sad, so it’s not entirely surprising that the Vibe GXP was cast aside. A bit of a shame considering the chance that the Vibe GXP was actually fun. Supercharger whine is a great noise, and I’m sure the lower springs, stiffer dampers and anti-roll bars, big brakes, and Bridgestone Potenza RE730 tires provided decent cornering grin-factor for the segment. Keep in mind, the hot Civic Si had ditched double wishbones up front and the Mark IV Golf GTI felt curiously inert. 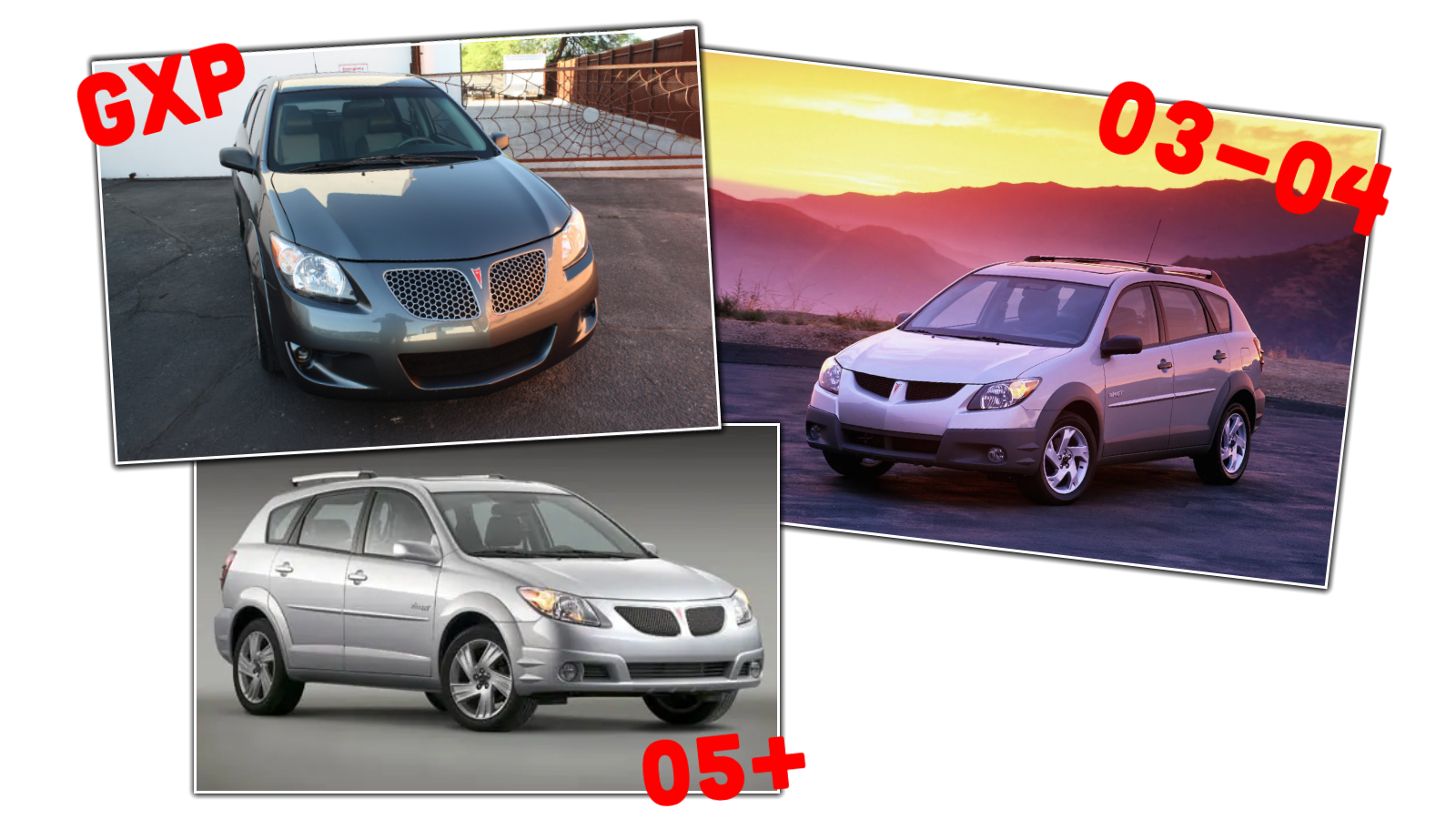 However, just because the Vibe GXP never made production doesn’t mean that Pontiac didn’t learn anything from its creation. The upper grille treatment on the facelifted Vibe is remarkably similar to that of the GXP, while color-keyed cladding became a more popular option on facelifted cars. Also, that supercharger? Believe it or not, you could eventually walk up to a GM parts counter and order a very similar one as a kit. According to autos.ca, GM rated the customer-ready kit for an extra 40 horsepower and 25 lb.-ft. of torque over a stock base-model Vibe, rather meaningful increases. Interestingly enough, fuel delivery for the supercharger was a little bit old-school as a fifth injector fattened up the air-fuel mixture under wide-open throttle. Hey, if it passed emissions certification, who am I to question it?

Autopian reader Nick Hernandez has been running one of these GM Performance supercharger kits on his Vibe for 90,000 miles and was happy to dish out some details on living with a supercharged Vibe. The supercharger itself is an MP45 like on a 2002 to 2006 Mini Cooper S, except with a special housing. While the kit is fully CARB-certified and installation is reportedly super simple, the supercharger’s unique construction means that servicing isn’t a straightforward affair. “There’s not an obvious access panel. I’ve serviced the snout and replaced the coupler up front and the oil, but I don’t think I can get the rotors out that way,” said Hernandez. Happily, a rebuild hasn’t been required in all 90,000 miles of supercharged operation. As Hernandez put it, “I’ve had no issues with the supercharger itself or anything like that.” All smiles, then. Good stuff.

Still, even if you can get your hands on a GM Performance supercharger kit, it’s hard to beat owning the actual Vibe GXP. However, just because you can own it doesn’t mean you can drive it. Because the Vibe GXP was very much a prototype vehicle, it can’t exactly be titled. Still, someone’s driven it at least a touch over the years, as the odometer appears to display 2,254 miles. While a list price of $15,500 is expensive for an economy you can’t drive, what’s a one-off slice of GM history worth to you? For the right person, the Vibe GT could be an awesome part of their collection.

Thomas is a Nu Rave-blaring, heel-toe downshifting, maple syrup-swilling, chassis-geeking, junkyard parts-hauling, floppy-haired scenester who's been writing about cars since college. His current ride is a 2006 BMW 325i with the six-speed manual gearbox. Instagram: @thomas.hundal Twitter: @thomashundal
Read All My Posts »
PrevPreviousThis Official Photoshoot Of A Volvo Designer And His Beloved Taillight Is Proof I Didn’t Make Up Taillight Fetishism
NextCold Start: If I Had To Imagine An Aquatic Owl Car This Would Be Pretty CloseNext