The Mystery Of The Oldsmobile Toronado Airstream Camper Has Been Solved 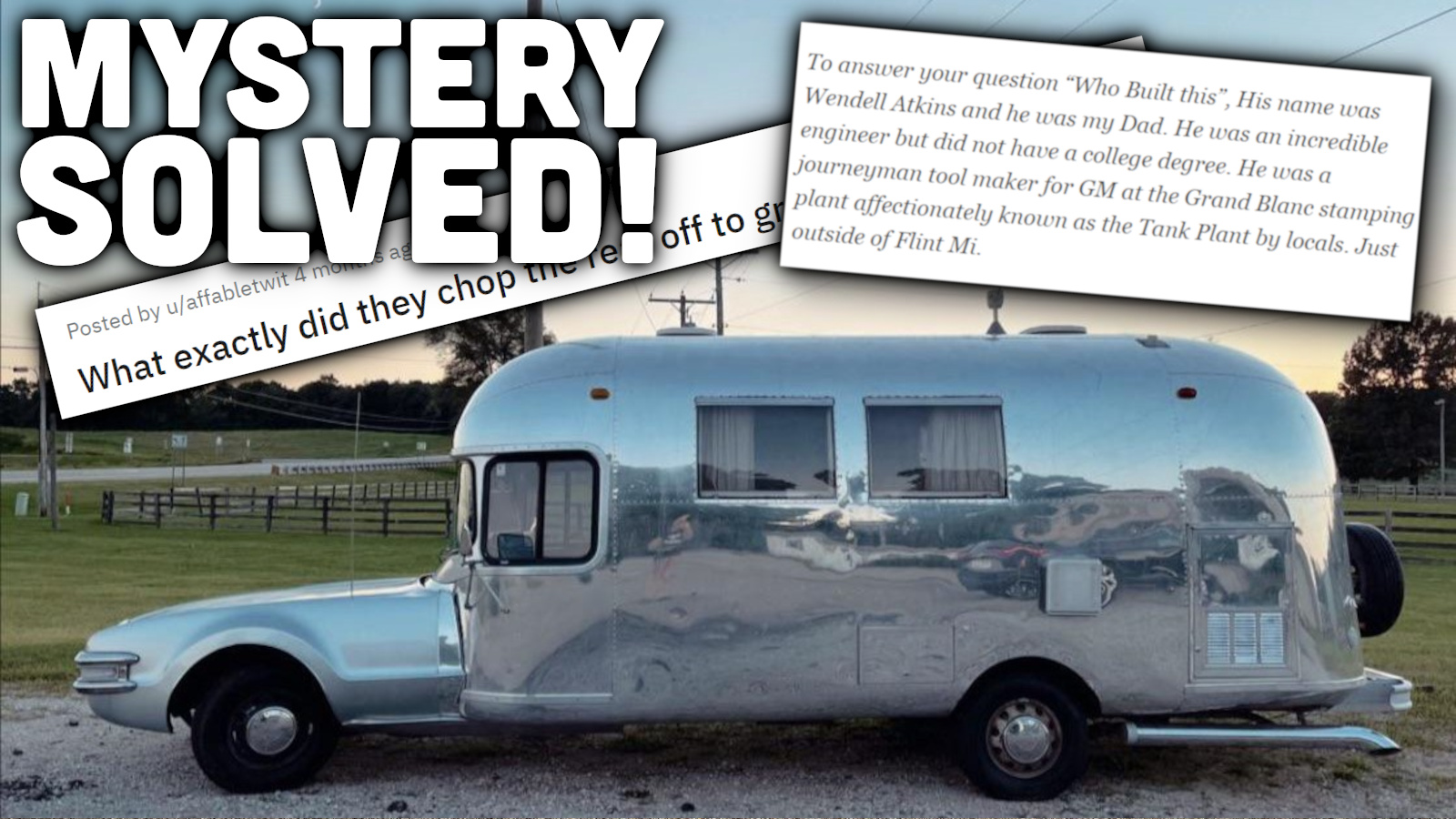 Back in September, I wrote about a mysterious contraption called the Aironado Airstream, a mating of an Oldsmobile Toronado and an Airstream Globe Trotter travel trailer. The mystery of who built it has been solved! And it’s even found a new home along the way. A YouTuber bought it, then tried to drive it back home across multiple states. Sadly, the old camper couldn’t make it all of the way home.

In September, the Oldsmobile Toronado Airstream–named the Aironado Airstream–resurfaced and fascinated car enthusiasts. An owner had it for sale and people from Reddit kept passing by and taking pictures of it. And who can blame them? It’s literally an Airstream Globe Trotter travel trailer with the front end of an Oldsmobile Toronado sticking out. This is the kind of thing that you share with your friends and spark up a discussion about.

Perhaps even more amazing is the fact that this camper has been a part of internet culture for so long. I first saw it when I was in high school back in 2010. But it goes even further back than that. RV history site Tin Can Tourists had been trying to find the builder since at least 2005 and it even appeared in an issue of Car and Driver in 2007. You’ll find grainy pictures of the Aironado all over RV forums dating back several years, often with amusing quips. Now, after all of these years, we finally have some hard answers about the camper.

Back when I wrote my piece in September, I was relying on many documents that came with the camper. However, these documents weren’t written by the builder and were passed down from owner to owner, like a long game of Telephone. Here’s a recap of the information from those documents:

In the documents sent to me, the previous owners called it the Aironado, which is a fitting name. As the story goes, an unnamed General Motors fabricator was upset about the GMC Motorhome. First produced in 1972 for the 1973 model year, the GMC Motorhome marked an innovative moment in RV history. The typical motorhome of the day rode high on a truck chassis, and an engine mounted up front drove the rear wheels. The design worked, but it made for large, ungainly vehicles with crude designs.

The alleged General Motors engineer is said to have felt that since the Oldsmobile UPP was so central to the Motorhome, it should have been branded an Oldsmobile. As any mad scientist would, the engineer then decided to make their own Oldsmobile-branded camper.

Since these were unconfirmed documents passed down from owner to owner, I wanted more. At the end of my piece, I asked for those familiar with the project to reach out, in hopes that we’ll get closer to the real story. The response was pretty amazing, as neighbors and friends of the builder reached out, and pointed me toward the builder’s son, Tim Atkins. They also said that the rumor of the builder being an Oldsmobile employee was false, but it was true that the builder worked for General Motors.

Word got around that we were looking into the history of this. As a result, Tim came here first and published the entire story of the camper build right in our comments! Who built this? His father Wendell Atkins, a man who loved building things:

To answer your question “Who Built this”, His name was Wendell Atkins and he was my Dad. He was an incredible engineer but did not have a college degree. He was a journeyman tool maker for GM at the Grand Blanc stamping plant affectionately known as the Tank Plant by locals. Just outside of Flint Mi.

A couple of corrections, both the car and the trailer are 1969s. The windshield is actually two Chevy pickup windshields (brand new at the time) about 3/4 of each, left/right sides. Sorry, no window shock absorbers. When making the housing for the windshield he made a wooden mock-up of the front curve of the trailer in our basement, placed the glass on the mold and put to much pressure on one spot that left a tiny crack in the bottom corner, probably still there. The seam between the two halfs is just a piece of rubber window seal sandwiched between two pieces of aluminum strips. He got the car cheap because the engine had been damaged by fire. He had to re-wire the the whole thing along with all of the vacuum hoses (that drove him nuts). My mom hated traveling in it because, well it rode like crap.

He never got around to improving the suspension on the trailer and when ever they stopped it always drew a crowd, dad ate it up. I was still in high school and for a couple of months I had the badest go-cart on the planet. Before the car and trailer were attached the car consisted of the front end, dashboard about 3 feet of floor board and the frame back to an axle he made to move it around. He had the gas can for the lawnmower sitting on the floor board with a rubber hose going the fuel pump and milk carton to sit on. No windshield. Let me tell you, a 455 is a monster with only half a car to move. I’m guessing he knew what I was doing but never said anything.

He loved to build things. I wish I could up load pictures of one of the pontoon boats he made (he made two). The pontoons were on arm’s that swung up for on the road (with a hand crank) and down for the water. Adding 5 feet of width. The permanently attached wheels had a hydraulic hand pump that made them operate like airplane landing gear. No trailer needed. This also drew a crowd when we went to the lake. Took about 45 minutes to prepare for the water.

Tim later took this comment and reached out to the folks of Tin Can Tourists with it, and you’ll find it published there, too. The Airstream lovers of that site claim that the shape of a 1969 Globe Trotter is different than the Aironado’s camper, so it’s likely an earlier 1966 to 1968 model. I looked into this, myself, and the Aironado does indeed have the older design. Tim notes that while his dad specifically looked for a 1969, it could be possible that someone sold him an older model as a 1969.

But after a couple of decades of puzzling enthusiasts on the internet, we finally have the answer to the questions of who built this and why. Wendell may not have been an Oldsmobile engineer, but the truth is so much cooler.

As for the camper itself? Someone bought it! Mavrik Joos, who runs the Mav YouTube channel, traveled from Minnesota down to South Bend, Indiana where he picked up the Aironado Airstream. From there, Mavrik intended to drive the rig all of the way back to Minnesota. I’d say that the camper found the perfect new owner. Mavrik’s channel is all about different RVs and actually camping in them. I think a YouTube commenter is on point with calling a sort of Jay Leno of RVs:

But fuel woes would end up being the least of Mavrik’s problems. The camper started off the trip capable of doing about 60 mph, but then the accelerator pedal’s mounting bolts broke off.

Mavrik attempted a bodge fix, but it didn’t work. The camper’s speed reduced to just 35 mph, and that was with Mavrik’s foot to the floor. Mavrik attempted to tow the camper home on a U-Haul but found it too large to fit on the company’s Auto Transport trailers.

Passing through my state of Illinois, something broke in the drivetrain, bringing the trip to a hard stop. Mavrik fears that it could be the transmission, but the camper was hauled to a shop, and he received word that the issue could be as simple as a CV axle.

And that closes this chapter of weird internet car history. Hopefully, we’ll see the Aironado around for years to come, and it looks like we’ll get to see it being camped in, too.

Mercedes is a lifelong fan of all things powered by an engine. When she isn't driving one of her five Smart Fortwos or her 14 other vehicles she could be found in the cockpit of a Cessna 172 or perhaps swimming in any body of water that she could find. She also has a deep love for buses of all kinds. Please send her buses. mercedes@theautopian.com Instagram: @mistymotors Twitter: @Miss_Mercedes30 Facebook.com/neonspinnazz
Read All My Posts »
PrevPreviousAcura NSX, Studebaker President State, Mitsubishi Legnum VR-4: Mercedes’ Marketplace Madness
NextThe New Lego Car Models Are Extremely GoodNext