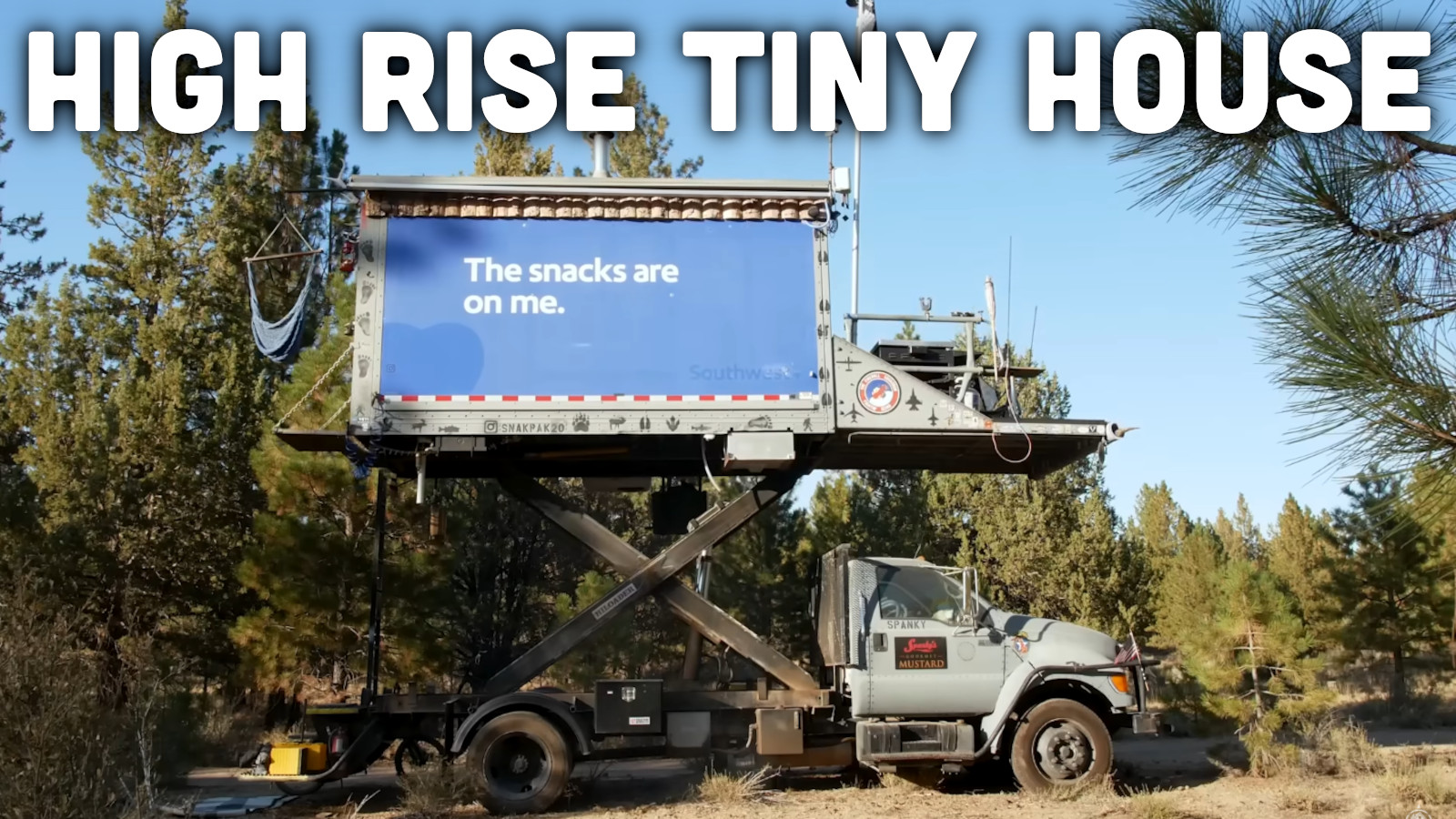 This weekend my YouTube recommends lit up with an RV conversion whose feasibility I’ve wondered about for years. You know those trucks with boxes on a scissor lift that fills your plane with snacks before takeoff? Some saw one of those and turned it into a tiny house and RV. The thing looks like a treehouse that you could take anywhere. Let’s take a look!

You know, every time I think I’ve seen the end of weird custom RV-type contraptions, I keep on getting surprised with more. Jason found an ice shack Chevy Cavalier thing that’s like what would happen if someone described an RV over the telephone. Now we’re going to take a look at something on some other end of the custom spectrum. A pilot has turned an airport catering truck into a tiny house, and this thing is pretty sweet!

This one comes to us from Tiny House Giant Journey on YouTube. On this channel, Tiny House enthusiast Jenna explores the coolest tiny houses that she can find. This time, she found a tiny house that really hits on two of my loves: flying and RVs. In the video, Southwest Airlines pilot Mark talks about his creation, an airport catering truck-turned-tiny house that he calls the “Snak Pak.”

Mark starts off by describing his history. He used to think life was all about making loads of money and buying stuff. Mark says that he was once a fighter pilot and a special operations pilot. Then he retired and started flying with Southwest. Telling his story, a relatable event triggered his change of pace. The pandemic hit, travel declined, and he was told that pilots weren’t needed at that time. Mark had long wanted to live in the box trucks that he had seen rolling around the airport, and he thought that it would be awesome to buy an old Southwest truck and live in it.

If you’ve ever wondered how much an airport catering truck sells for, well, Mark has the answer. Apparently, during the auction of this 2000 Ford F-650 provisioning truck, there was just one other bidder. Mark got it for $3,300, then spent an additional seven months and another $26,700 turning it into a cozy little home. At the time when Tiny House Giant Journey filmed the video, Mark said that he had been living in his truck for two years and a month.

Perhaps the coolest part is that the scissor lift still works, so it’s a home with a view practically anywhere!

Mark’s truck home also comes with some decent specs. It measures in at 28.5-feet-long, it weighs 25,000 pounds, and it’s powered by a 5.9-liter Cummins straight-six turbodiesel. Paired with an Allison AT545 (an automatic also found in school buses), this engine is making 215 horsepower and 420 lb-ft torque. To illustrate how much this truck is basically a brick trying to cut through the wind, Mark says that it gets 5 miles to the gallon when towing his Toyota Tacoma, and 8 miles to the gallon when it’s on its own.

Continuing with the outside of the rig, Mark says that he painted the truck to look like a fighter jet and the doors even have his old callsign on them. On the edge of the box are silhouettes of the jets that he’s flown.

Mark also explained this truck’s old life. When it was a catering (or provisioning) truck, it would drive up to the aircraft. Then, the scissor lift would raise the 14-foot box up to door level with the aircraft. The aircraft would then be supplied with the food and beverage items out of the box. In this truck, the jack system lifts the box up 17 feet.

Moving on to the tiny house part of the box, Mark says that it now sits at 10.5 feet tall on one side and 9 feet on the other. Underneath sits a 5-gallon tank. The shower can recycle water from this tank, or pull from the fresh tank. Water coming from the tank goes through UV light and filters.

Also on the bottom of the tiny house unit is a 4500W generator and a hookup for shore power. Continuing his tour, Mark points out another tank, as well as an air-conditioning unit. More goodies come in the form of an arm that allows bike repairs, 1200W of solar, and even a security system.

Inside, Mark built a nice little home for himself. The highlights of the kitchen are a kerosene-powered cooktop and a German espresso machine.

The electrical system is supported by 600Ah lithium batteries and other equipment includes 5G internet, as well as a ham radio with a 200-foot antenna. Apparently, the setup is good enough to hear people from other countries. In addition to all of that, there’s an indoor and outdoor shower, a composting toilet, and a fantastic patio. I get treehouse vibes from this build, and at least to me, that makes it even cooler.

Overall, this is one of the coolest mobile living spaces I’ve seen in a while. It’s awesome that Mark is able to use his creation as both a home and an RV. And looking at Mark’s Instagram, he takes this vehicle just about everywhere. So this isn’t one of those builds that get cobbled together just for the pictures. I’d love to see more builds like this. There’s reusing old commercial vehicles like buses, and then there’s taking a specialized vehicle like an airport catering truck and doing something awesome with it.

If you want to see the adventures of a catering truck turned into a tiny house, check out snakpak20 on Instagram. And for more tiny houses, watch Tiny House Giant Journey on YouTube!

Mercedes is a lifelong fan of all things powered by an engine. When she isn't driving one of her five Smart Fortwos or her 14 other vehicles she could be found in the cockpit of a Cessna 172 or perhaps swimming in any body of water that she could find. She also has a deep love for buses of all kinds. Please send her buses. mercedes@theautopian.com Instagram: @mistymotors Twitter: @Miss_Mercedes30 Facebook.com/neonspinnazz
Read All My Posts »
PrevPreviousThe Mercury Villager Nautica Always Reminded Me Of This Particular Shoe: Mercury Monday
NextThe Autopian Chooses The Coolest Cars You’ll Finally Be Able To Import To America In 2023Next