Every time that I think I’ve seen the best, most gorgeous bus-to-RV conversion, another comes around and blows my mind all over again. Gracing the pages of Bring a Trailer is a piece of history that you can sleep in. This 1961 Mercedes-Benz O 321 H started life carting around a Swiss hockey team. Now it’s an RV that looks absolutely stunning from every angle.

If there’s anything that disappoints me about modern RVs, it’s that they rarely look like something that you’ll just want to stare at for hours. And sure, there’s nothing wrong with that. RVs are more or less meant to be hotel rooms that you can take just about anywhere. But that makes it so much better when a motorhome or trailer nails both functionality and aesthetics. It seems to me that bus conversions seem to hit it out of the park most in this regard. I’ve highlighted gargantuan double-deckers, old coach buses, transit buses, and even a milk tanker-turned RV. All of them are beautiful in their own way. But this 1961 Mercedes-Benz O 321 H on Bring a Trailer might take the cake for its beauty. I could have just as much fun staring at it as I would driving it.

Mercedes-Benz has a rich bus history dating back to a bus built by Karl Benz in 1895. The manufacturer’s site describes that history like this:

In 1895, the first motorised bus in the world connected the town of Siegen with the villages of Netphen and Deuz, a distance of around 15 kilometres. On 18 March 1895 at 6.26 am precisely, the bus built by Carl Benz travelled this route for the first time. With its 5 hp single-cylinder petrol engine, the bus completed its trip in one hour and 20 minutes. Eight passengers were on board and at the steepest point they all had to get out and push.

Later, new routes were drawn up and from 1898 vehicles made by Gottlieb Daimler were also being deployed. At the end of 1899 a company in Speyer, not far from the Benz home town of Mannheim, offered a bus service along four routes. In the first continuously operating service in Germany, five Daimler vehicles were used. In the following years large numbers of bus routes came into being in Germany and Europe up to the time of the First World War.

The Post Office played a key role in sales in Germany from 1905. In 1905, it opened its first cross-country route using motor vehicles from Bad Tölz to Lenggries in Upper Bavaria. The Post Office used the Daimler, a bus with a very respectable 28 hp engine. Passengers could enjoy the views through large windows. Just six years later, the Bavarian Post Office was operating 53 permanent Motor Car routes with another 19 that only ran in the summer. 164 buses were in use, the majority made by Daimler.

It should be noted that Mercedes’ claim to the “first motorized bus in the world” comes with some caveats. Steam-powered buses existed for decades before the Benz bus, and even the electric trolleybus predated the Benz bus by years. Perhaps Mercedes-Benz is trying to claim the world’s first gasoline-powered bus, as its first buses were powered by 2.65 liter one-cylinder engines making 5 HP.

The 1920s brought winds of change. Transit buses back in those days consisted of a bus body on a truck chassis. This worked, but was less than ideal for passengers who couldn’t climb the stairs into the bus. In 1925, Benz decided to depart from a traditional truck chassis with the “Low Bus.” This bus featured a modified truck frame that was high at the front and rear axles, but dipped in-between to allow for a lower floor than normal. The result was that the floor sat just 26 inches off of the ground.

A year later, Daimler Motoren Gesellschaft and Benz & Cie would merge into Daimler-Benz AG. The merger would mean a combining of the two brands’ bus designs and in the 1930s, Daimler-Benz started experimenting with streamlined buses to cruise down the new autobahn with.

The next big moment for Daimler-Benz buses would happen in 1949 as the company got back on its feet after World War II. Daimler-Benz fired off two new bus designs in 1949 and 1950, before unveiling a whole new design language in 1951. The 1951 O 6600 H was a coach bus featuring a cabover design and a rear engine. As Mercedes-Benz notes, this bus would mark the start of a design that remains commonplace with Mercedes buses (and other buses) today. Mercedes-Benz notes that these buses were so different from the ones of the past that they required a completely different chassis than the truck chassis of before. The O 6600 H also introduced an electrically operated gearshift.

The bus we’re looking at today originally went into production back in 1954.

Daimler-Benz’s O 321 H brought further advancement, namely a design that evoked the 300 SL and a different construction method. The O 321 H featured a frame and floor assembly with the bus body welded to it. That body also supported the structure of the bus, and Mercedes-Benz describes it as self-supporting. The company goes on to describe how the design came to be:

The avant-garde Mercedes designers limited the use of chrome, which the others used profusely, to a minimum. After all, the harmonious shape was supposed to develop an effect of its own. Dealers and customers took a very different view of this and loudly called for the usual tinsel. Not having to be asked twice, Daimler-Benz complied with these wishes, simultaneously demanding a hefty increase in list price. And suddenly it had a hot seller on its hands.

Mercedes goes on to note that how much chrome you get depends on the year, with later years getting more chrome. The bus was a smash hit, with Daimler-Benz moving over 30,000 units through its production from 1954 to 1970.

This 1961 Mercedes-Benz O 321 H has been through quite a lot. As the story goes, this coach was used by Swiss hockey team EHC Biel-Bienne in the 1960s to about 1976. Then, it changed hands to a private owner. That person converted the bus into an RV, where retained seven seats and gained a galley, bath, auxiliary heating, and more. It’s said that the private owner did the conversion himself, and he held onto the completed RV until 2012. Then, it was auctioned off in Switzerland and brought to the United States. The winning bidder paid about $32,000.

A year later, the bus popped up for sale at a dealership in Massachusetts for $115,000. Later that year, it sold in a Bonhams auction for $99,000 to Fox Motorsports in Grand Rapids, Michigan. It seems like this bus hasn’t been driven much through all of this, as pictures of the odometer in each auction show it to have about 281,000 kilometers (about 174,605 miles). Sure enough, it still showed about that many miles when Fox Motorsports put it up for sale for $99,900 in 2020. 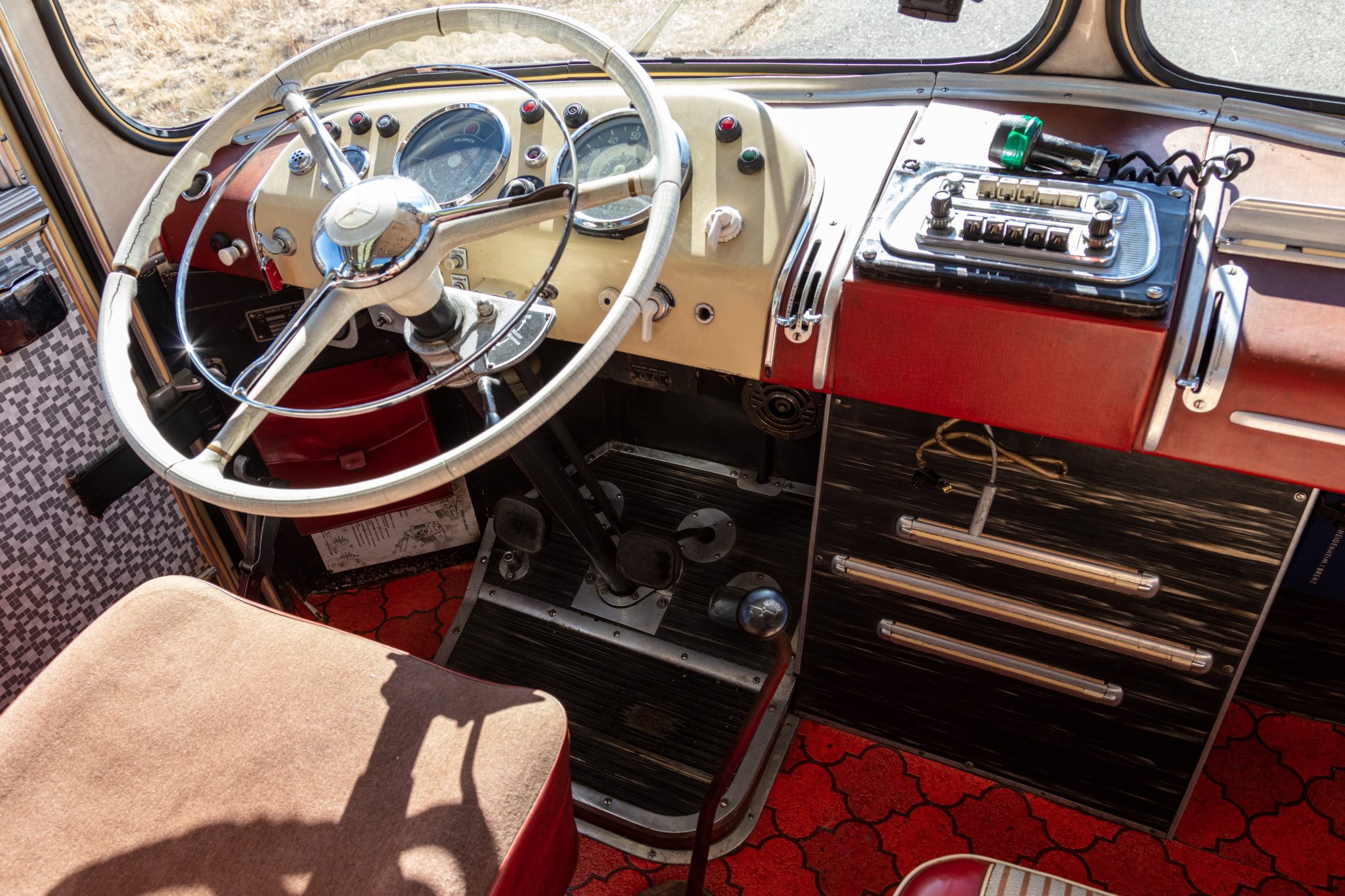 The owner selling it now says that they got it from Fox Motorsports in 2021. Today, the odometer shows about 288,000 kilometers, or about 178,954 miles. It’s awesome to see that this bus actually got driven rather than just sitting in a warehouse. Perhaps even more awesome is the fact that it’s remained largely untouched from its 1970s camper conversion.

Features of this bus include a bunk bed, two sofas that turn into a bed, another bed in the rear, a portable air conditioner, a kitchenette, and a bathroom. From the looks of it, you could comfortably sleep five in this bus, maybe more if your friends are willing to sleep in seats. Additional features include a diesel-powered heater, refrigerator, cooktop, and a 220V wiring system. 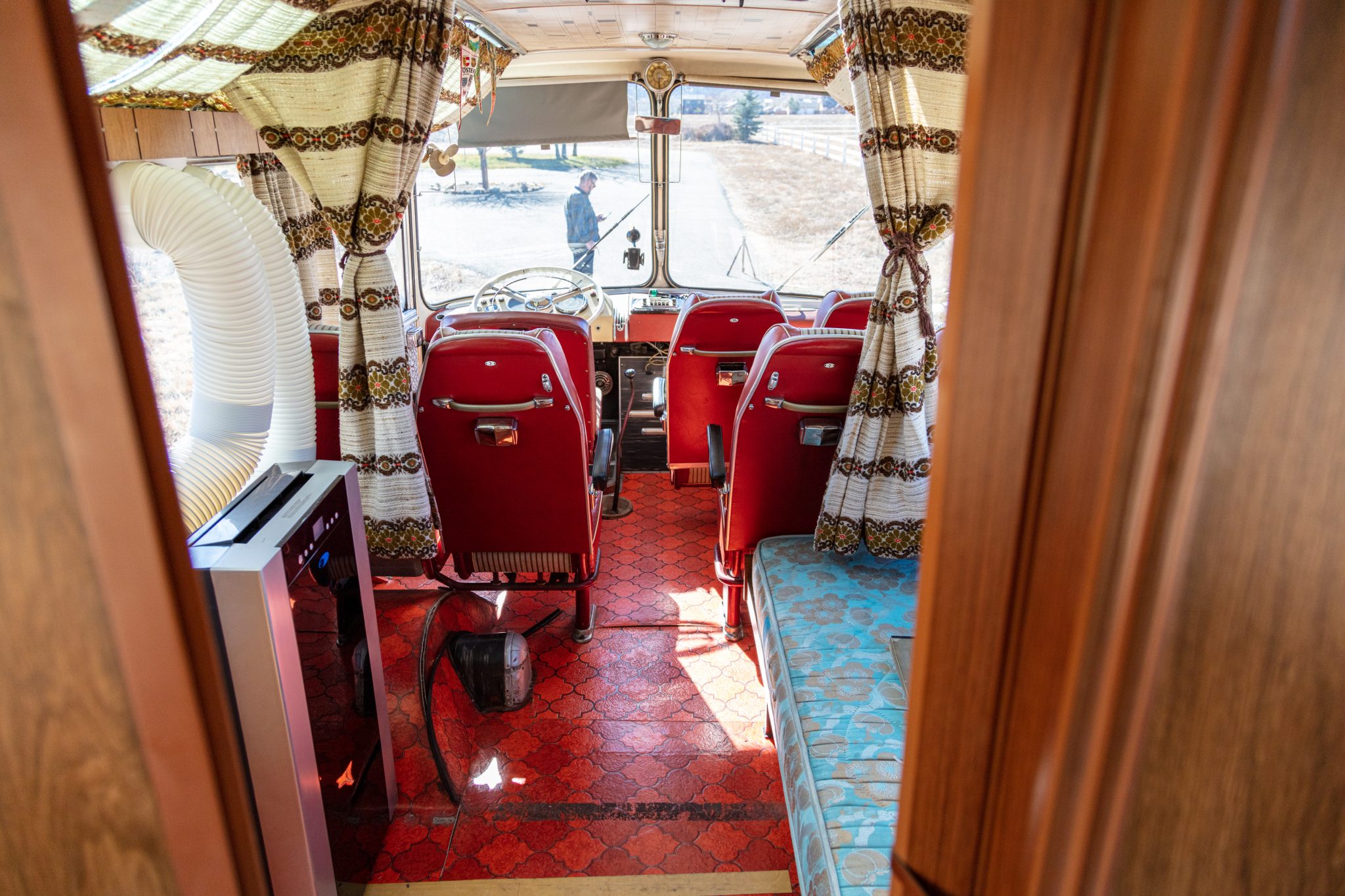 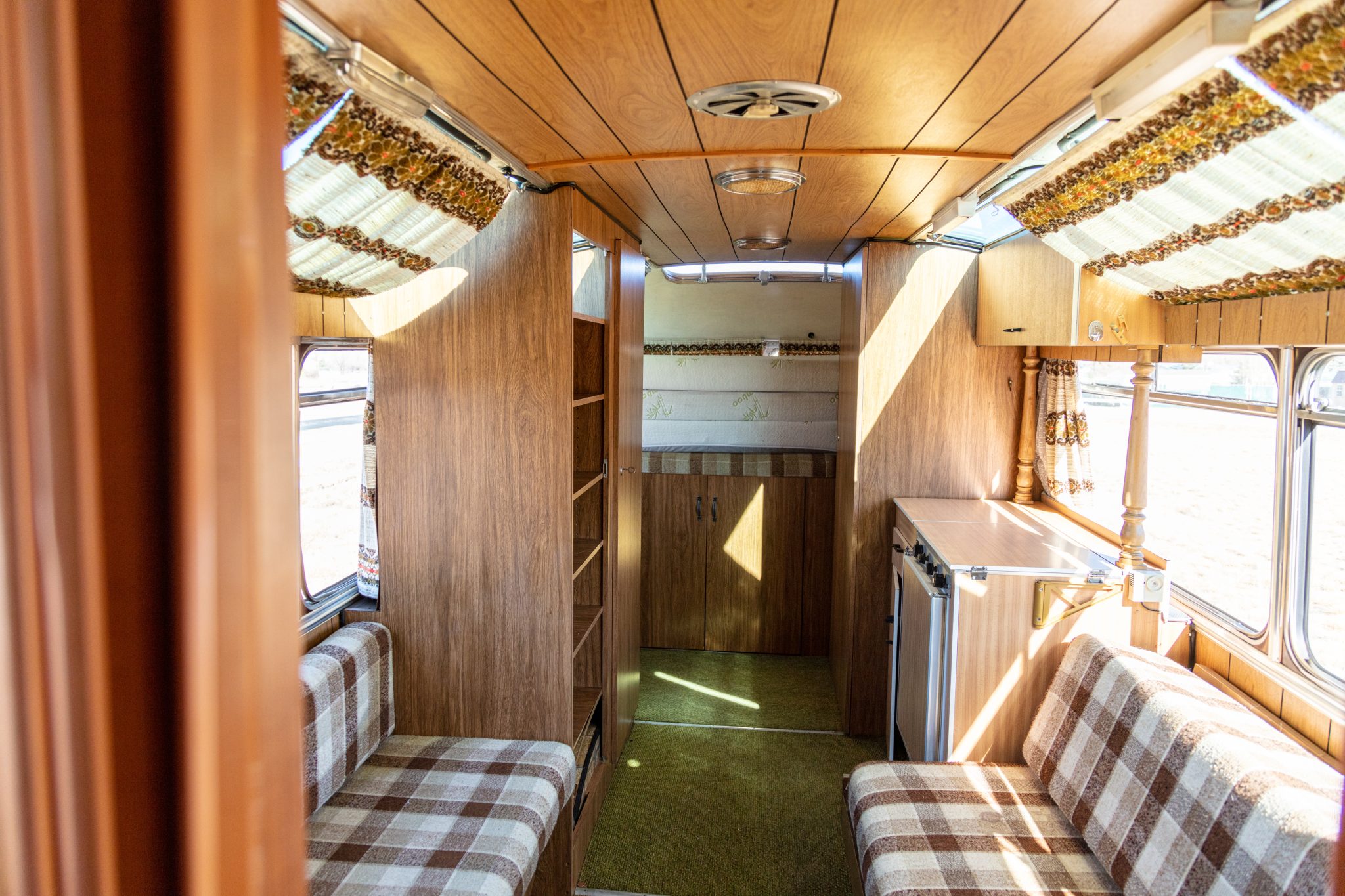 Unfortunately, sleeping in a bus this cool does come with some downsides. There’s a five-gallon tank for freshwater and a five-gallon tank for gray water. As you could probably guess by those two facts, there isn’t a shower. There is a toilet, thankfully, but it’s a portable toilet with a built-in tank. That means that you’ll have to drive your bus to truck stops to get a good shower, or find a body of water.

But if you can live with that, you get a bus that’s absolutely dripping with style. Panoramic windows cover the roof and the bus is noted to have two sunroofs on top of that. Those panoramic windows have shades, too, so it won’t entirely be an oven in there. This is the perfect RV to park somewhere with a view. Or heck, park it anywhere and stare at it. 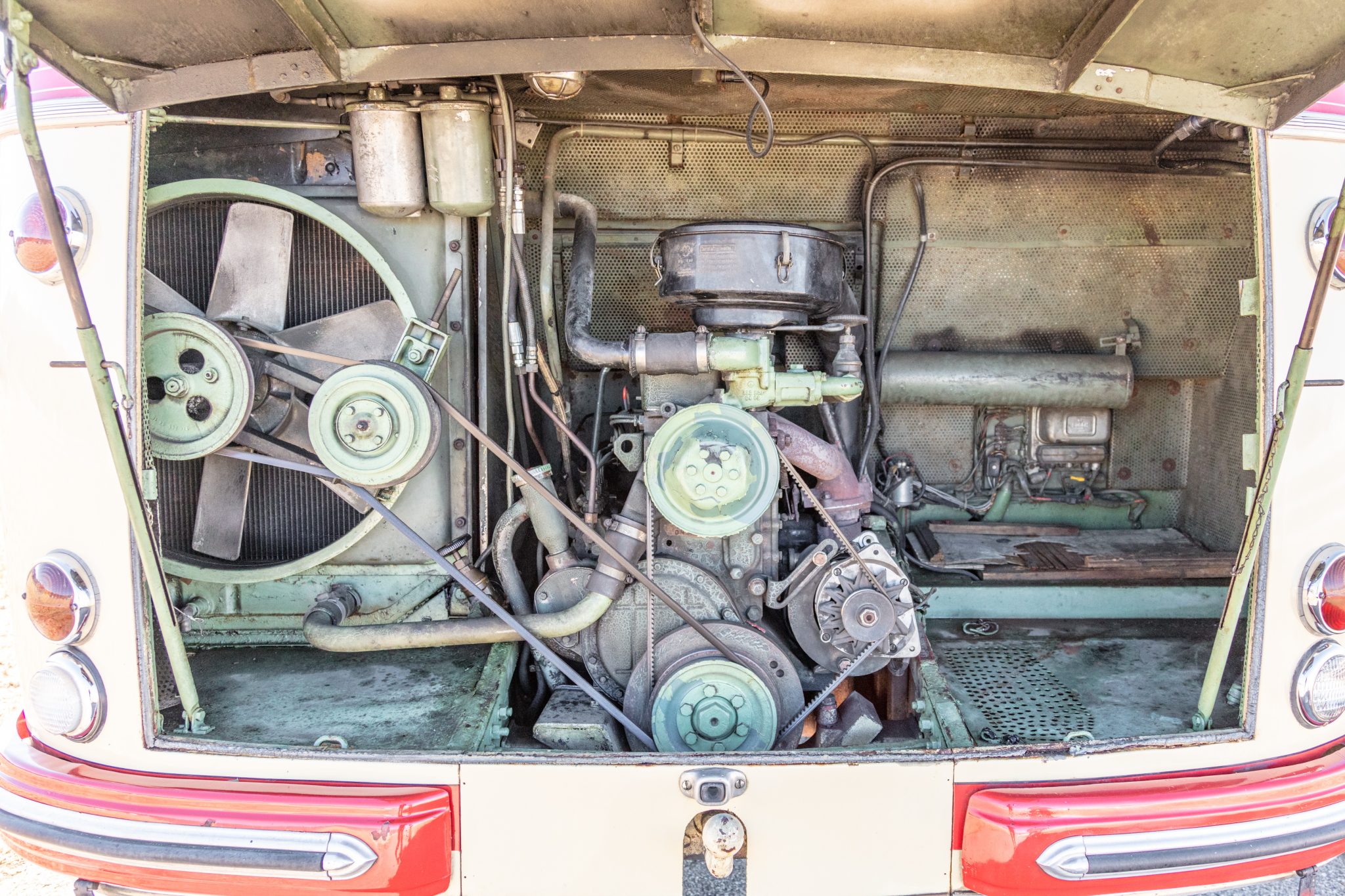 Power comes from a rear-mounted 5.7-liter diesel inline-six making 126 HP transmitted through a five-speed manual. The engine bay used to have a spare tire mounted to a cradle on the right side. It’s unclear what happened to it.

If you’re interested in continuing the story of this bus, you can get it from Bring a Trailer. Bidding is at $32,000 with two days to go. If you do win this bus, please send me an email because driving this would probably be heavenly!

(Photo credits to the seller on Bring a Trailer unless otherwise noted.)

Mercedes is a lifelong fan of all things powered by an engine. When she isn't driving one of her five Smart Fortwos or her 14 other vehicles she could be found in the cockpit of a Cessna 172 or perhaps swimming in any body of water that she could find. She also has a deep love for buses of all kinds. Please send her buses. mercedes@theautopian.com Instagram: @mistymotors Twitter: @Miss_Mercedes30 Facebook.com/neonspinnazz
Read All My Posts »
PrevPreviousWhat It’s Like Unboxing A 1-of-1 ‘Beauberry’ Ford GT
NextIt’s Time To Stop Sharing That Meme With All The White SUVs Because It’s Wrong And StupidNext