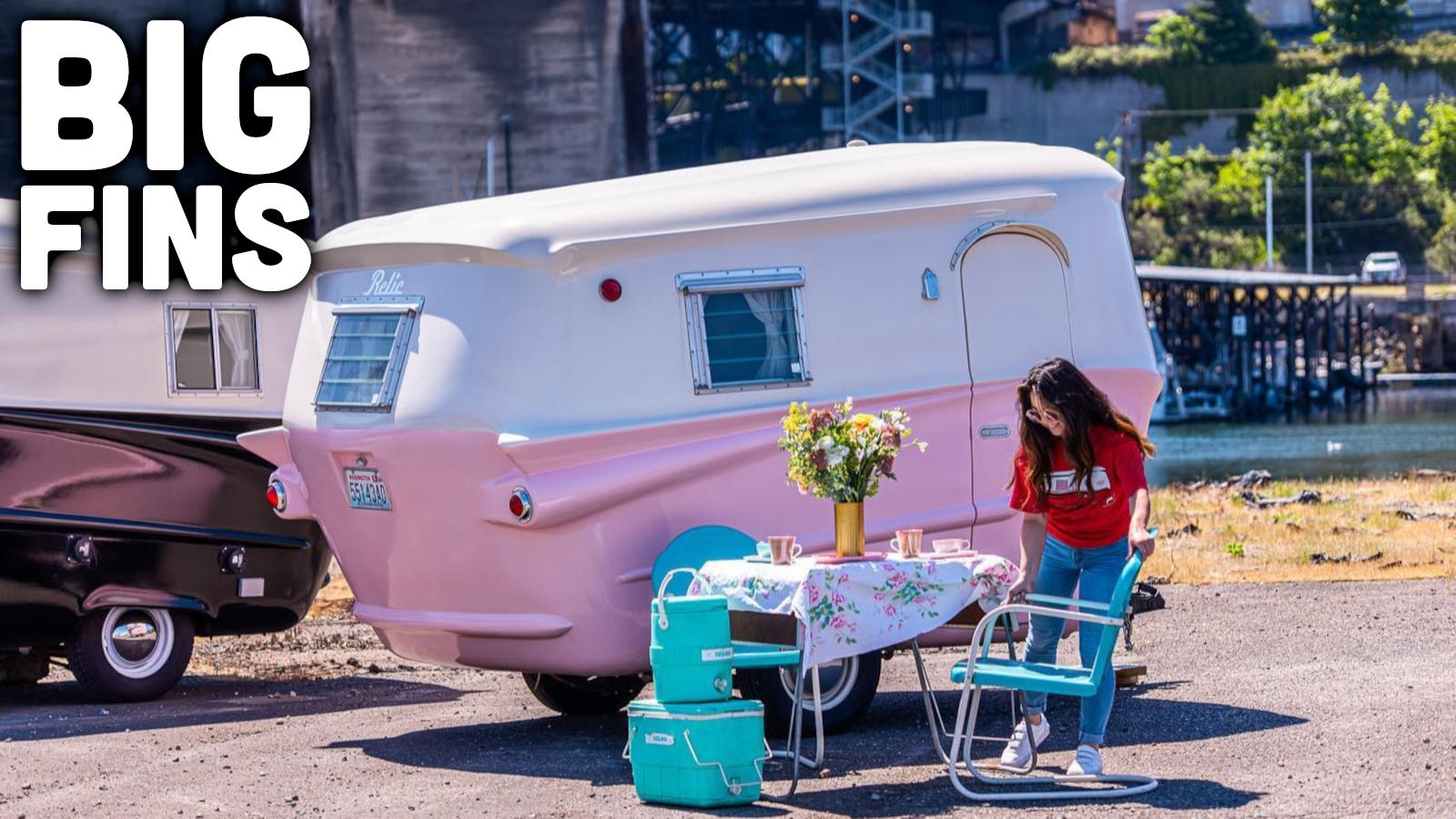 One of the more exciting things happening in the RV world right now is the rise of fiberglass campers. These wonderful, often egg-shaped campers are making a comeback, and they’re bringing tons of character and not much weight with them. Here’s another, and it’s dripping with style. Relic Trailers will custom-build you a 1,000-pound fiberglass camper complete with huge fins straight out of the 1960s.

My favorite kind of camper is the fiberglass trailer. While much smaller than the behemoths you’ll often see at a campsite, they offer some attractive benefits. Fiberglass trailers are usually so lightweight that they can be towed by nearly anything with a hitch. Molded fiberglass is also a durable material that will never rust and can last decades without major leaks. Plus, you can get campers in awesome shapes that you won’t find with more traditional campers. Fiberglass campers were a hit in the 1970s and 1980s. Then, many of the companies that built them dissolved into the annals of RV history. Few fiberglass camper builders survived.

Thankfully, times are changing, and the fiberglass camper space is growing. It’s easy to see why, as a fiberglass camper usually offers a lower cost, lower weight option than the big box-hotel rooms on wheels. Have a little crossover that doesn’t have much of a tow rating? A fiberglass camper would be perfect for it.

What Is Relic Trailers? 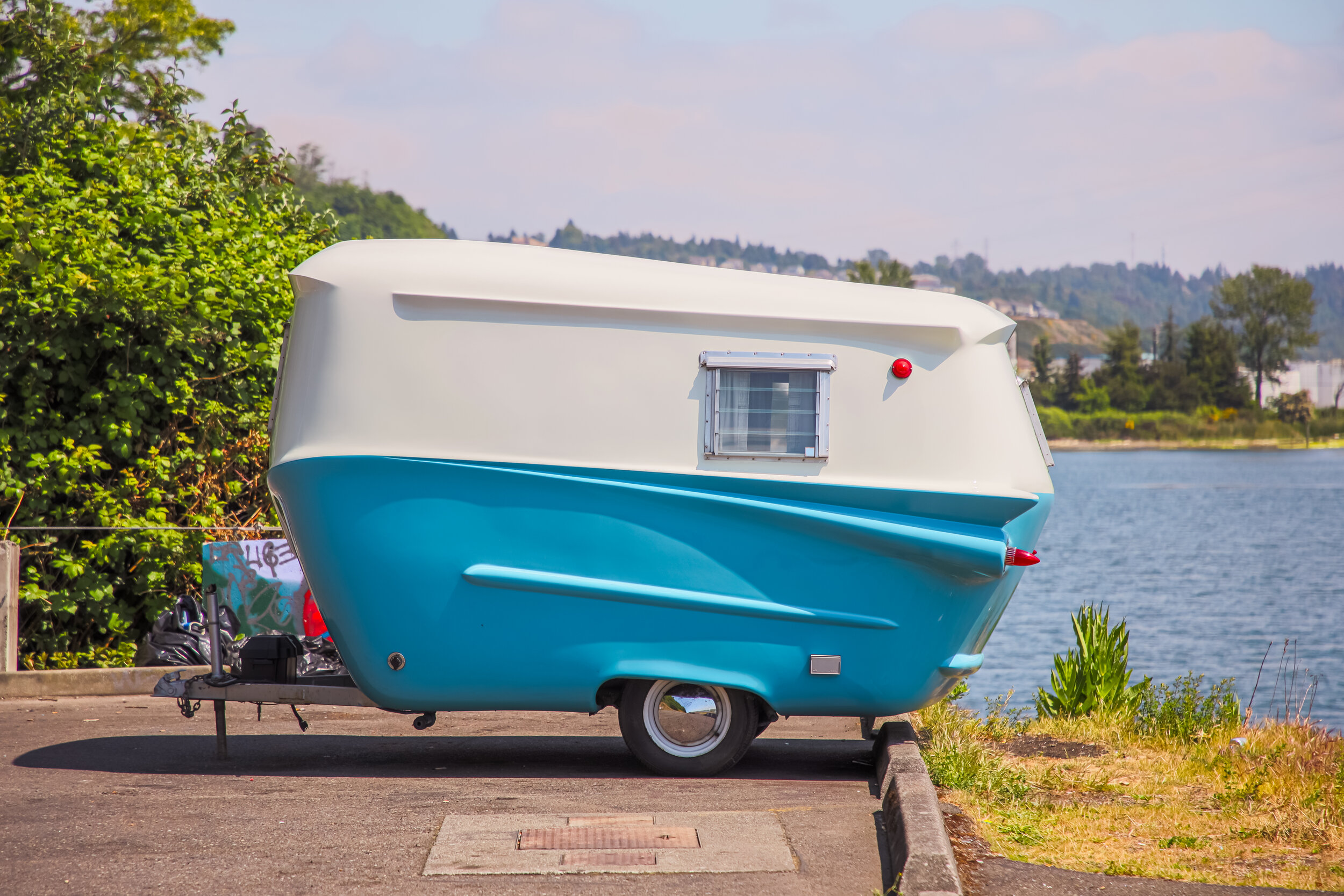 Relic Trailers is not an entirely new company, but it is a fresher face compared to giants like Thor and Forest River. The company says its story began in the 1960s. Back then, a man named Roy was a welder and started work on his dream camper, a trailer with a mid-century design. Roy cranked out two trailers before abandoning the manufacturing process. He shelved his idea and put everything into a Michigan storage unit in 1963: 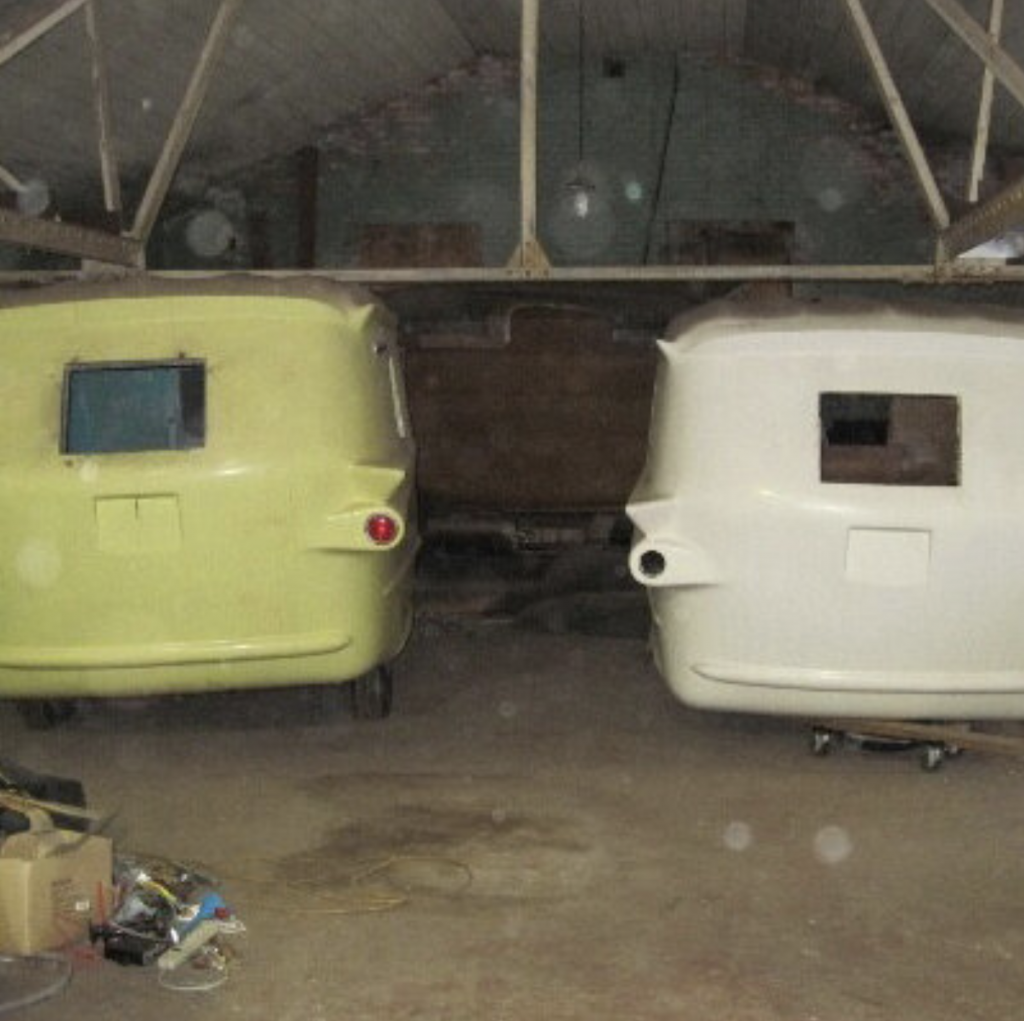 Fast-forward to 2015, and a new owner was clearing out the storage facility. As RVTravel writes, Roy’s old trailers were listed for sale, catching the attention of Jayne and her husband, Brian. The pair already had decades of experience restoring vintage campers, and they decided that they had to have these trailers. Jayne and Brian convinced the seller to let them buy the whole lot, and they hired a semi-truck to haul everything out to Washington state.

The pair then learned not just how to manufacture campers, but how to modernize Roy’s design. Relic Trailers’ site says that the company partnered with aerospace designers to help it re-engineer and produce the campers with modern tech. The company says that its campers are in production as of 2020 and since each one is hand-built, it takes six to nine months to get one.

What You Get With A Relic Trailer 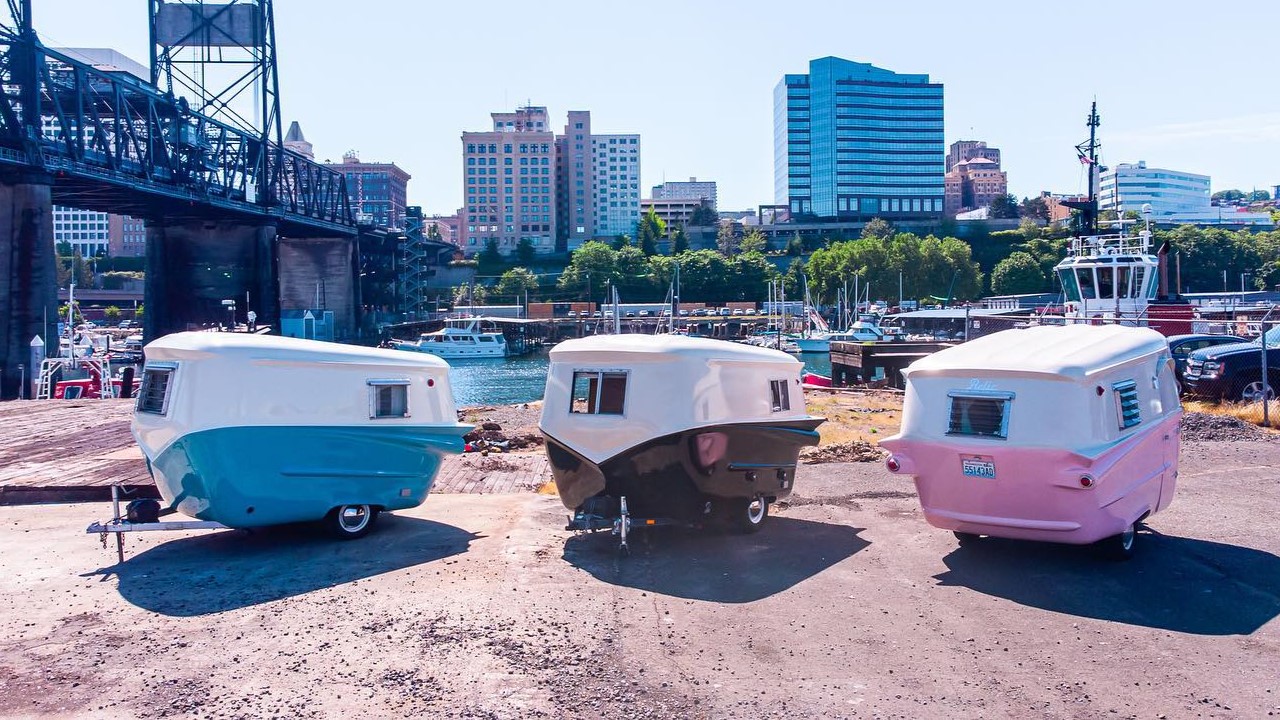 Right out of the gate, this camper looks like nothing else that you can buy new today. Fiberglass campers often get called “egg campers” because, well, they look like rolling eggs. It doesn’t matter if you buy a Scamp or a Cortes, you’re getting something rounded that looks like a little pod. These Relic campers mix 1960s camper design with 1960s car design. The entry door is a rounded portal and the body has rounded corners but looks a bit more rectangular. The highlight of the design, at least to me, is the fins. Combined with the bullet taillights it makes the trailer look like something that you’d tow behind your 1959 Cadillac Coupe de Ville. In fact, Relic Trailers says that on a higher trim level, you do get classic Cadillac bullet-style taillights.

The interior is also something special. Walk into the interior of many fiberglass campers and your interior walls are the same as the exterior walls. That’s fine, and I dig it in some cases like an old Scamp or my U-Haul CT13. But Relic takes it a step further and as an option, it’ll fill the interior with wood trim and wood cabinetry. 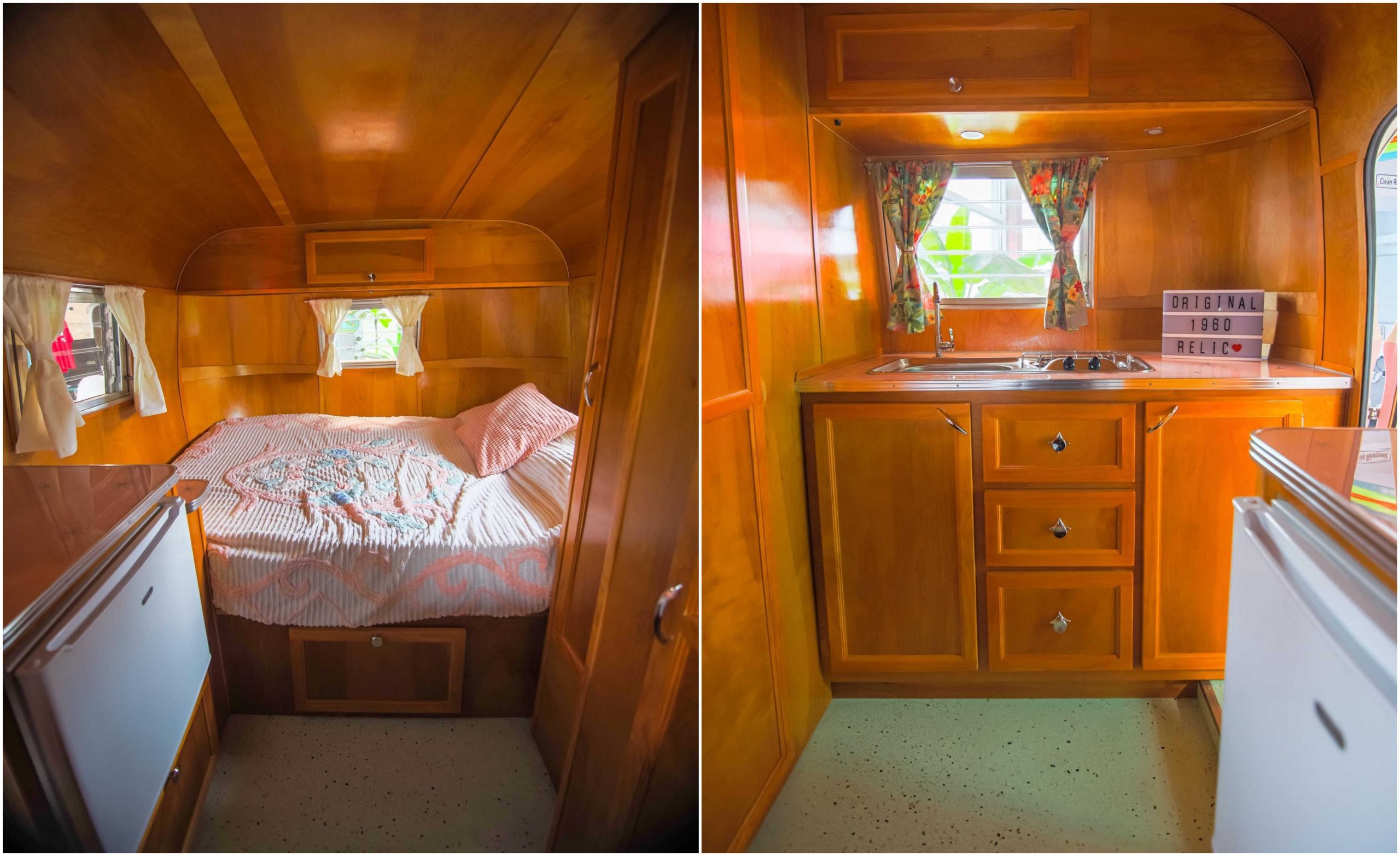 It gets better from there. A Relic Trailer measures 12 feet, 6 inches long with an interior length of 10 feet long. That’s just six inches shorter than my U-Haul CT13 but with the same interior space. And the ceiling is 6 feet and an inch tall. Yet, you can option one of these to have a wet bath complete with a flushing toilet. Some fiberglass campers have no bathroom at all, but depending on the options you choose, you could take a shower in this!

Another neat trick with the Relic Trailer is that it sits at 7 feet, four inches tall. This should allow it to fit in many garages. And perhaps the amazing part is that the team at Relic builds these trailers alongside restoring other trailers. 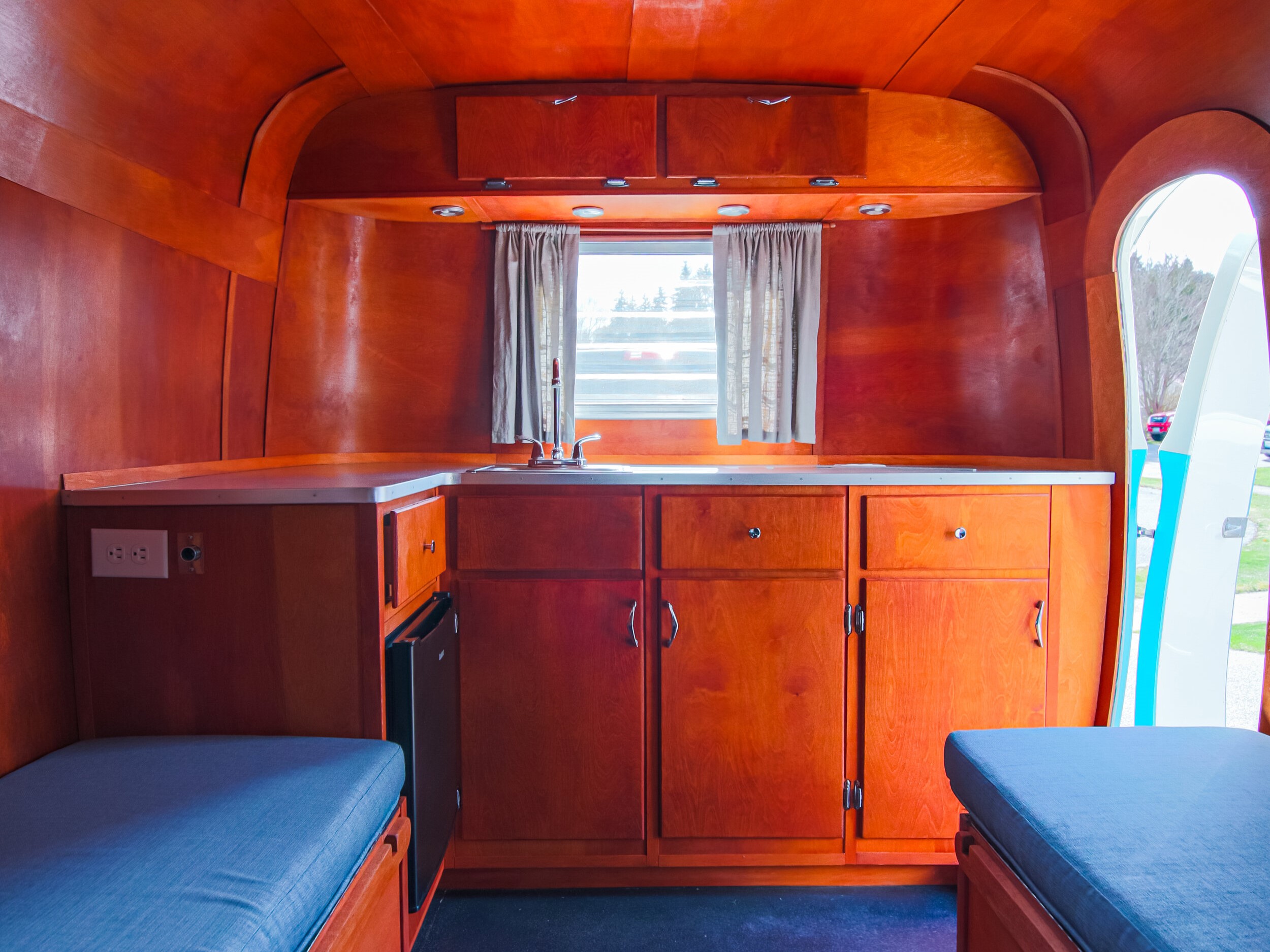 The company says a Relic “Vintage Camper Essential” starts at $29,950. That gets you bunk beds up front and twin beds in the rear, a sink with a city water connection, flush taillights, sliding windows, and a furnished interior. Step up to the Vintage Camper Essential+ for $39,950 and the rear becomes a lounge that converts into a queen bed, plus you get a refrigerator, cassette toilet, heating, and cooling.

Next is the Vintage Glamper for $49,950. Getting that camper nets you a flushing toilet, vintage Pontiac-style lights, a vintage-style awning, glitter countertops, a deep cycle battery, a power converter, and more. 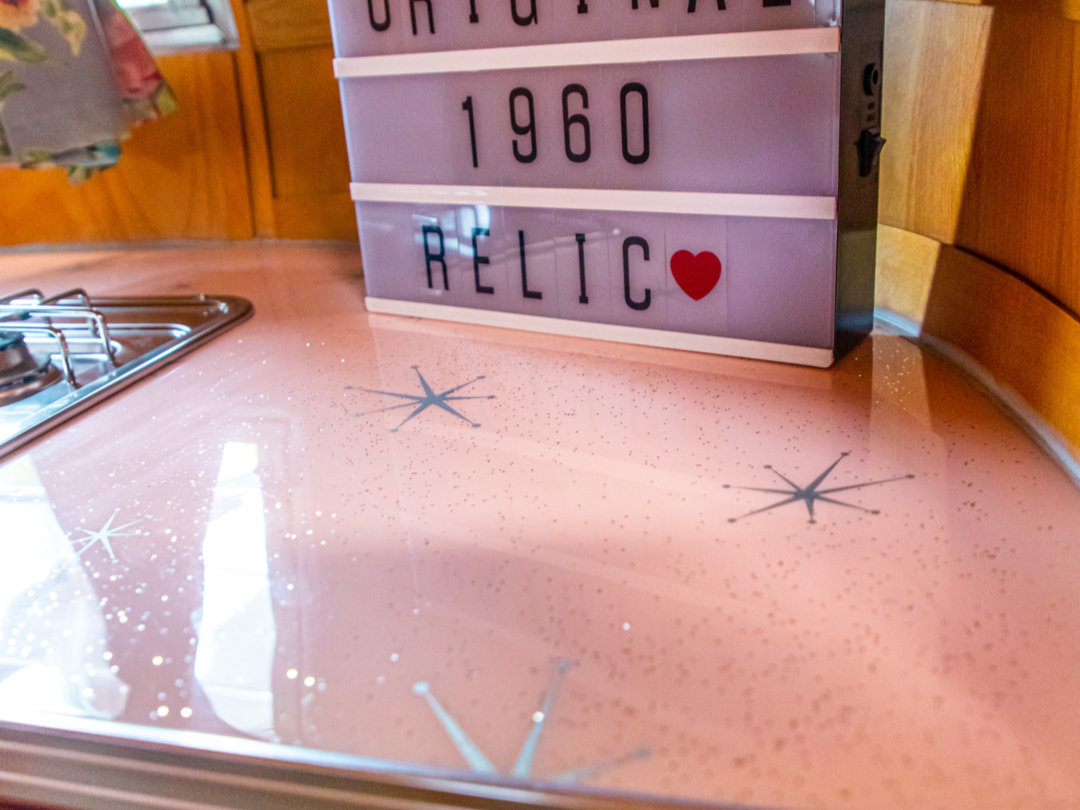 At the top of the range is the Luxury Resort for $59,950. It gives you everything from the previous packages, plus the Cadillac-style lights, the aforementioned wood interior, a kitchenette featuring a cooktop, vintage-style windows, and paint protection film. And of course, you get that aforementioned wet bath. Both the Vintage Glamper and Luxury Resort come with a 9-gallon freshwater tank. 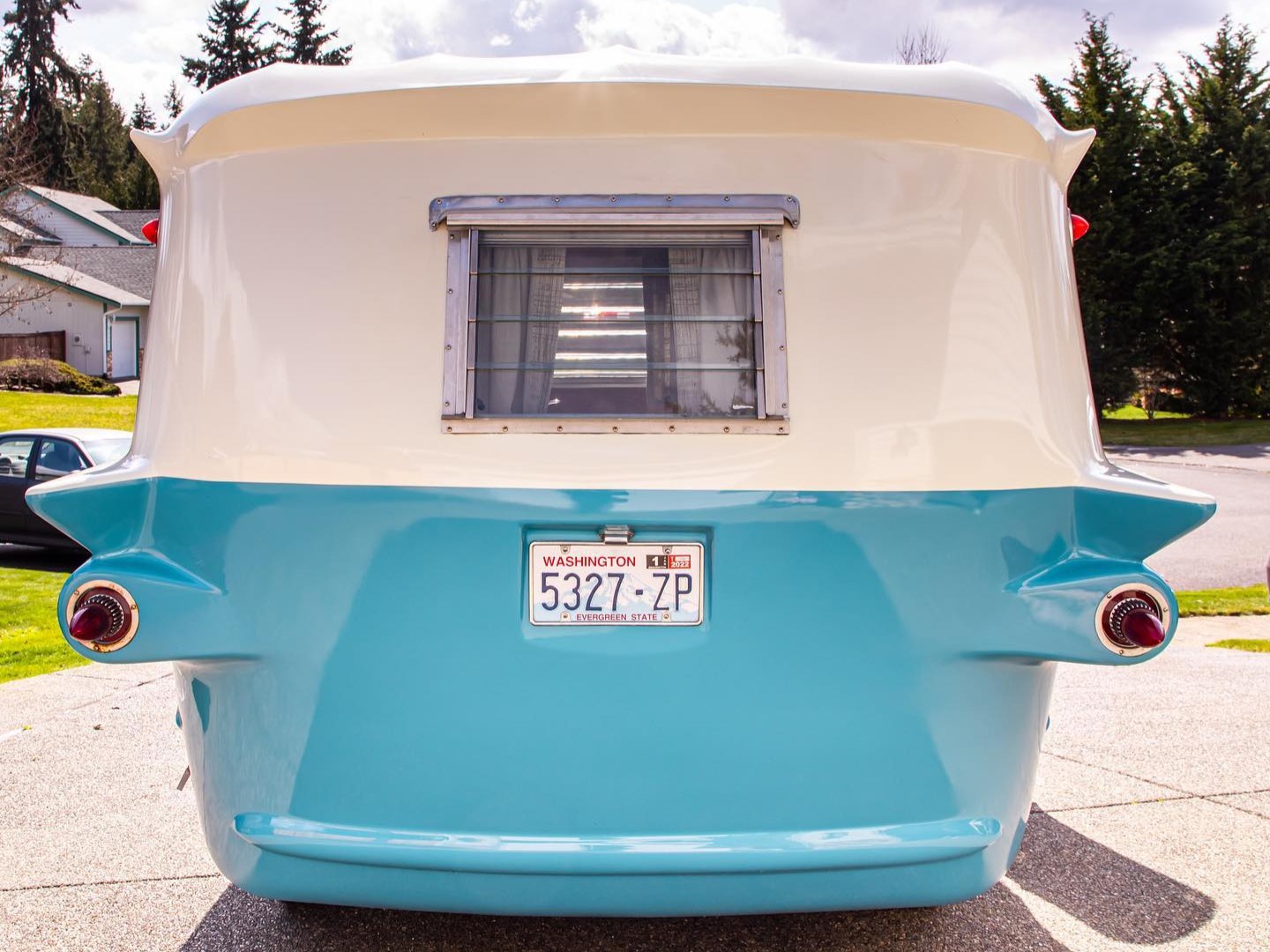 Relic goes on to note that the drawer and cabinet pulls are chrome and there are vintage reproduction options. You don’t have to stick to the script, either, and Relic Trailers will make your trailer to your specifications.

While these trailers are priced higher than a number of the other fiberglass campers out there, Relic does offer a pretty distinctive trailer. They look like nothing else and apparently, the customization options are endless. I’d love to see one of these pulled behind one of the vintage cars that I often pick for Mercedes’ Marketplace Madness. If you want one, you can get your build started on Relic Trailers’ site.

Mercedes is a lifelong fan of all things powered by an engine. When she isn't driving one of her five Smart Fortwos or her 14 other vehicles she could be found in the cockpit of a Cessna 172 or perhaps swimming in any body of water that she could find. She also has a deep love for buses of all kinds. Please send her buses. mercedes@theautopian.com Instagram: @mistymotors Twitter: @Miss_Mercedes30 Facebook.com/neonspinnazz
Read All My Posts »
PrevPreviousHow I Twin-Turbocharged My Econoline Van’s Tractor Engine Using Cheap Amazon Parts
NextWhat Are The Best Cars To Cheaply Buy From Carvana If It Implodes? : Open ThreadNext