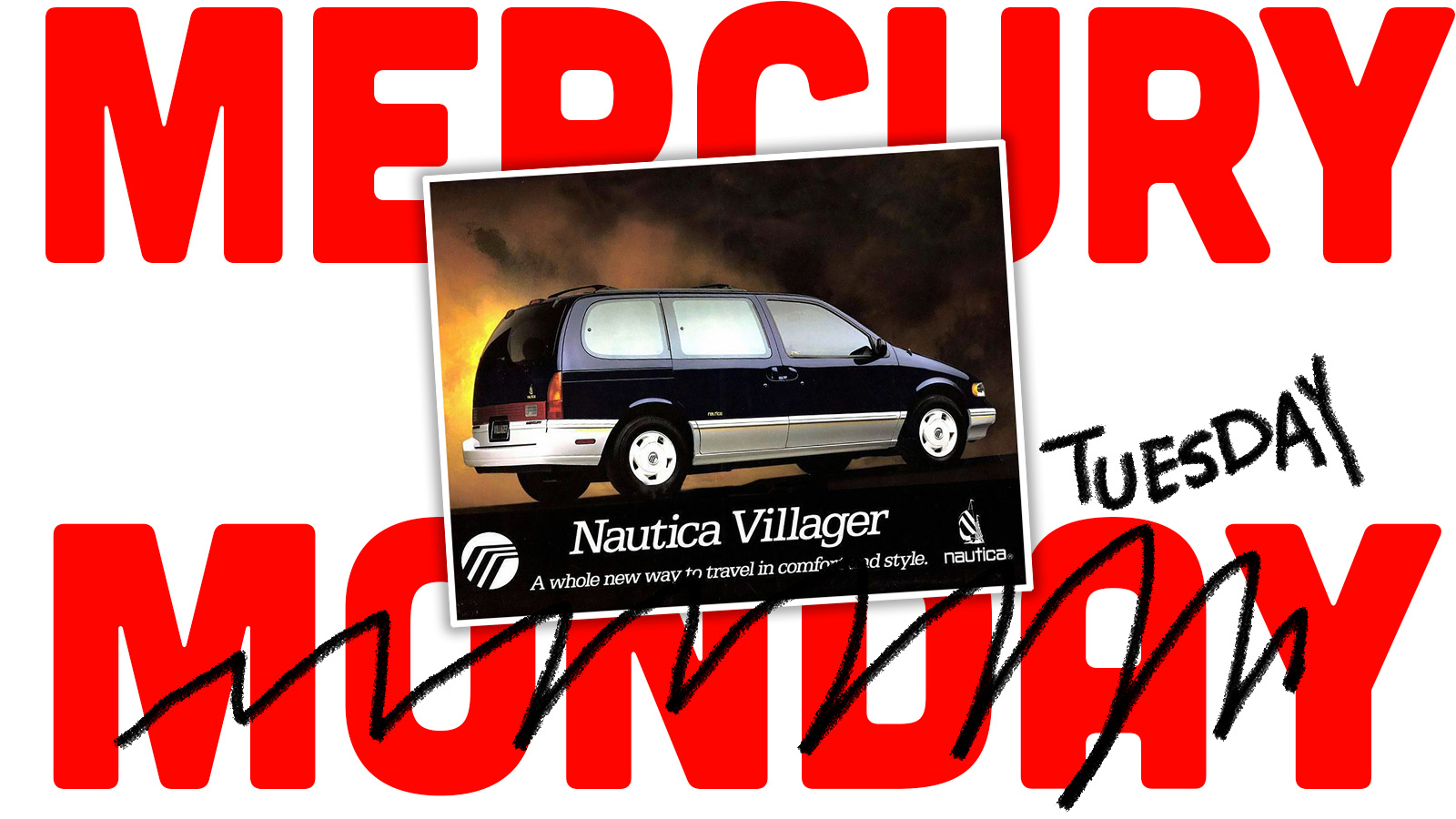 Quick, what do you think of when you think of the Nautica clothing brand? If you’re like me, your mind will soon be flooded with images of old people playing golf or some dude at a restaurant sending back some food, or maybe you imagine seeing someone frantically washing their hands after making contact with me. I can’t quite put my finger on exactly why, but I just don’t have that many positive associations with Nautica. That may be why I’m so fascinated with this week’s “Mercury Monday on Tuesday” featured-vehicle, the Mercury Villager Nautica edition.

What should I talk about first here, the Villager or the Nautica trim of the Villager? I suppose the grammar of automotive names dictates that I should handle the Villager part first, so what the hell, let’s do it.

[Editor’s Note: Someday Jason will actually meet the Monday deadline for Mercury Monday. It’s meant to go up Monday because that’s the only day of the week with the same first letter as Mercury! A couple weeks ago, he even published Mercury Monday on a Friday! JT, JT… What will we do with you? -DT]. 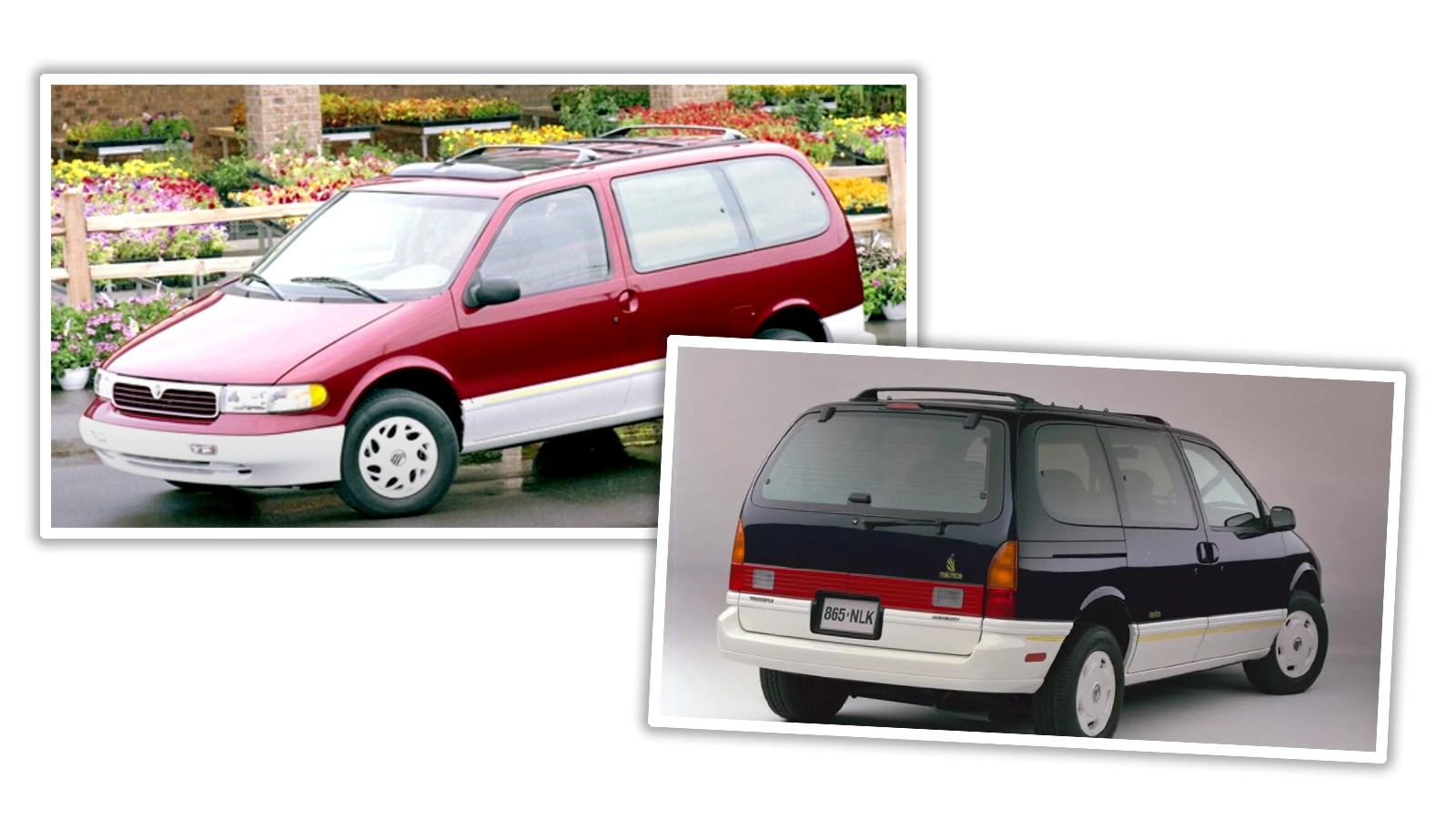 The Mercury Villager was in a rare category of Mercury (one that includes another Mercury Monday machine, the Mercury Tracer) that had no Ford-badged sibling. That’s not to say the Villager was an only child; it did have a twin, but it wasn’t a Ford. It was a Nissan.

Yes, a Nissan. The Japanese carmaker had a joint venture with Ford to build a Quest minivan in a Avon Lake, Ohio plant, and along with the Quest came the re-badged and slightly re-styled Mercury Villager.

The Villager/Quest used a version of the Nissan Maxima front-wheel drive platform, though it got a Ford name, and the three-liter Nissan V6 (the same one in the 300ZX) but de-tuned down to about 150 hp. One nice consequence of the detuning, which was presumably accomplished cia a lower compression ratio, is that the engine became a non-interference design, so you can really ignore the crap out of those timing belts.

Was the Quest/Villager a good minivan? Eh, it was fine. Really, its Zodiac sign would have been Adequa, a water sign represented by a guy sitting on a couch holding a beer and making the teeter-totter like so-so hand gesture. They’re compatible with um, Capricorns and the one that’s the goat eating a can.

It wasn’t as quick or roomy as a Chrysler Town and Country, and it only had a sliding door on one side, like the Ford Windstar, at least in its first generation. The interior was fairly flexible, and it had at least one novel exterior styling detail: a front light bar. 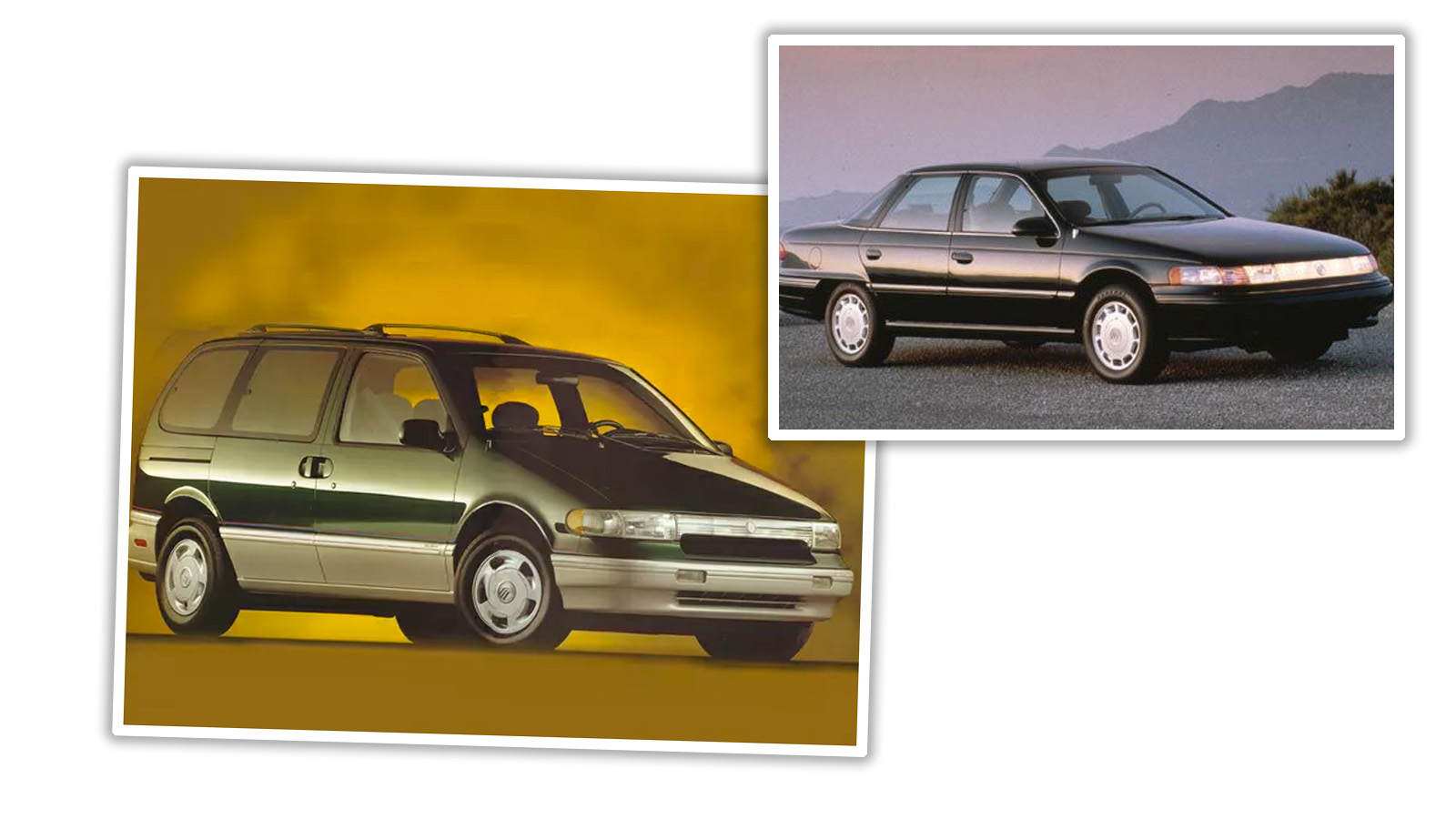 Mercury also used the front light bar on their Sable re-badge of the Ford Taurus, and while these were novel, only now, in our golden age of cheap and plentiful LEDs are we really seeing a flowering of front light bars. Still, I think we can say Mercury was a bit ahead of their time with this one.

Some of Mercury’s early ads for the Villager revolved around a made-up competitor headed by a very thin-skinned and vindictive CEO, fed up with his executive team of do-nothing, sycophantic drips. Here, look:

See what I mean? I feel like I’ve seen companies do similar sorts of strawman-bashing ads, making up fake, miserable competitors that they can easily feel superior to. Now that I think about it, that Gen X cultural touchstone, the Wendy’s “where’s the beef” ad, was very much in this category:

Seriously, what the fuck is up with this ad? Why did everyone go so nuts over it? Wendy’s is comparing its to an absurd nightmare it just made up. No fast food chain was designed like a purgatorial office complex, with a maze of cubicles surrounded by walls the color of feckless regret. That wasn’t a thing.

And besides, even if such a chain were real, the cain is very clear about what its focus is: a big bun. The lone piece of signage in that strange restaurant is a sign that reads HOME OF THE BIG BUN, so, really, those three dowagers shouldn’t be so fucking surprised. It’s the home of the Big Bun. You got a big bun. Calm down.

I’ve gone off the rails here, sorry. Let’s cleanse our cerebral palettes with this commercial for a second-generation Villager, one that shows the flexible interior to nice effect:

These were fine, I’m sure they served many families with quiet dignity and loyalty over the years, but if you meet someone who claims to be super into Mercury Villagers, I suggest you rip off the latex human mask they’re undoubtedly wearing, exposing their reptillian alien head, because no real human is going to say those words and you best get out of there before they inject you with their venom and feast upon your rapidly-liquifying entrails.

Now, the one version of a Villager that you just might notice or remember is the one I’m supposed to be talking about right now, the Nautica edition. Of course, clothing label special editions for cars weren’t anything new; Volkswagen and AMC both had jeans-inspired editions back in the 1970s, and both companies continued on to produce more high-end fashion designer editions as well. Plenty of companies did. It was A Thing. So it’s not really all that strange that Mercury sought out a fashion partner, too. 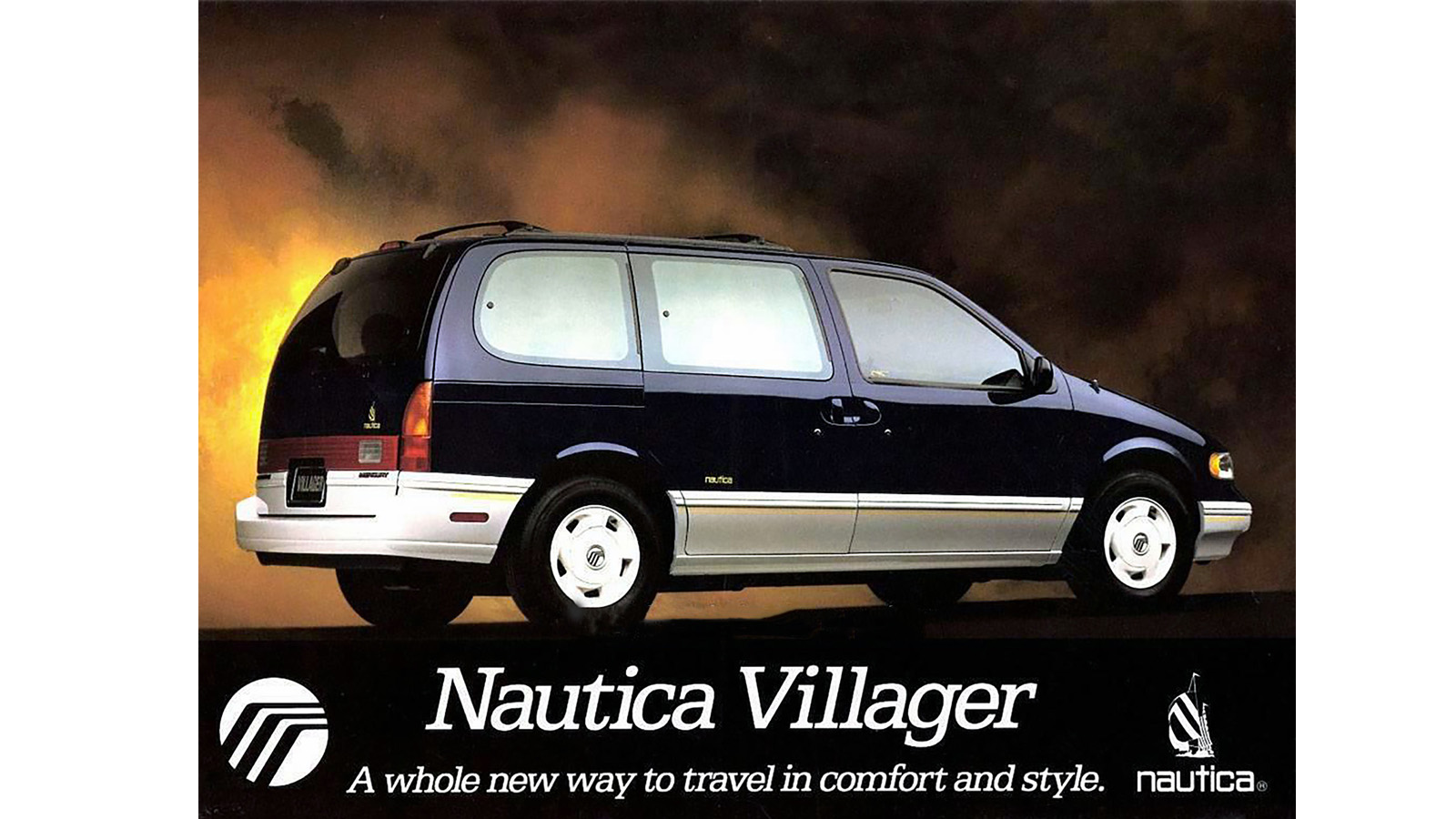 And, I’ll be honest: is Nautica really any weirder than a Gucci AMC Hornet or a Bill Blass Lincoln? Probably not. But the Nautica Villager is the one that reminds me most of a shoe. Specifically, this shoe: 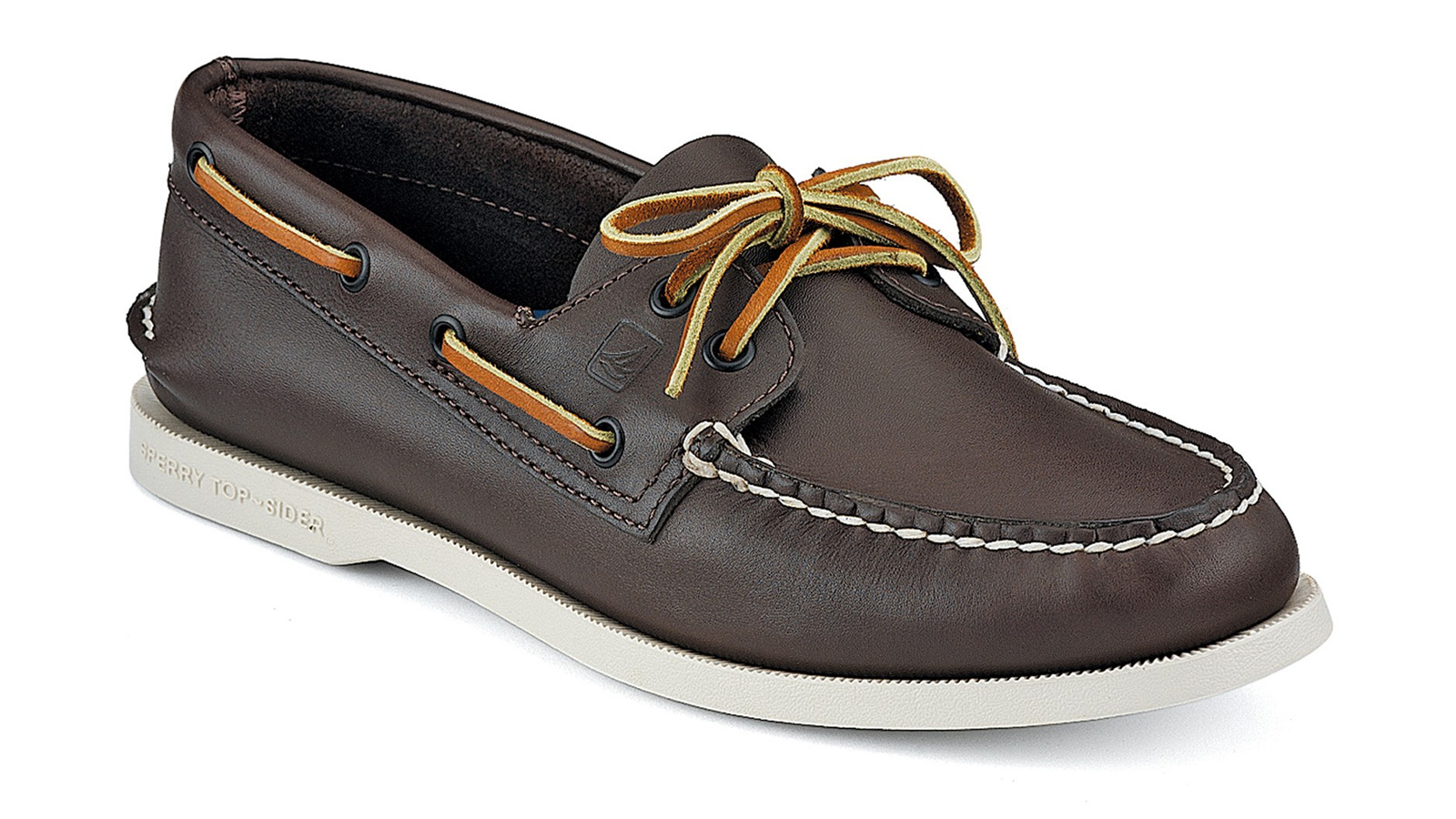 I saw these shoes on people approximately infinite times from 1980-1999 or so. I think it’s possible some people wore up to six of them at once, though we didn’t all have ubiquitous cameras with us at all times back then so I can’t prove it. These shoes were often worn to a degree where they looked like a rhino scrotum held together with leather laces that, either by design or just out of spite, refused to stay tied.

The people who wore these were many and varied, but not that varied. If they wore them without socks, they were slightly more likely, statistically, to be douchebags. And, yes, it was also likely these shoes would be paired with other clothing, or perhaps bedding, from Nautica.

I think it’s a combination of the vaguely boat-like associations with the shoe and the white sole, which matches with the Nautica Villager’s white lower body cladding and white wheels, that make the association so strong for me.

So what exactly did you get with your Nautica Villager? It was an appearance/interior package, with no drivetrain or performance changes, at least none I’ve ever been aware of. I suppose it’s possible they adjusted the throttle mapping to be more responsive to deck shoes with no socks, compensating for foot-sweat slippage against the rubber, but I can’t prove that.

What you got were those aforementioned white wheels and white body cladding, a yellow pinstripe, blue-and-white color scheme, and other options that came after 1996, but before 1999, when the second-gen Villager appeared, with its waterfall grille, no light bar, and second sliding door, but that’s when the Nautica trim disappeared into the vast blue sea.

The Nautica had three rows of seats with non-swiveling captains’ chairs in the second row, and all in blue leather with white inserts and the Nautica ship logo embroidered on the seatbacks. Oh, the floormats were branded, too. And, of course, the all-important Nautica decal on the rear.

Best of all, it came with a luggage set that included a special yellow Nautica duffel bag, an item which, when found in pristine condition, routinely sells in the high five figures at auction. 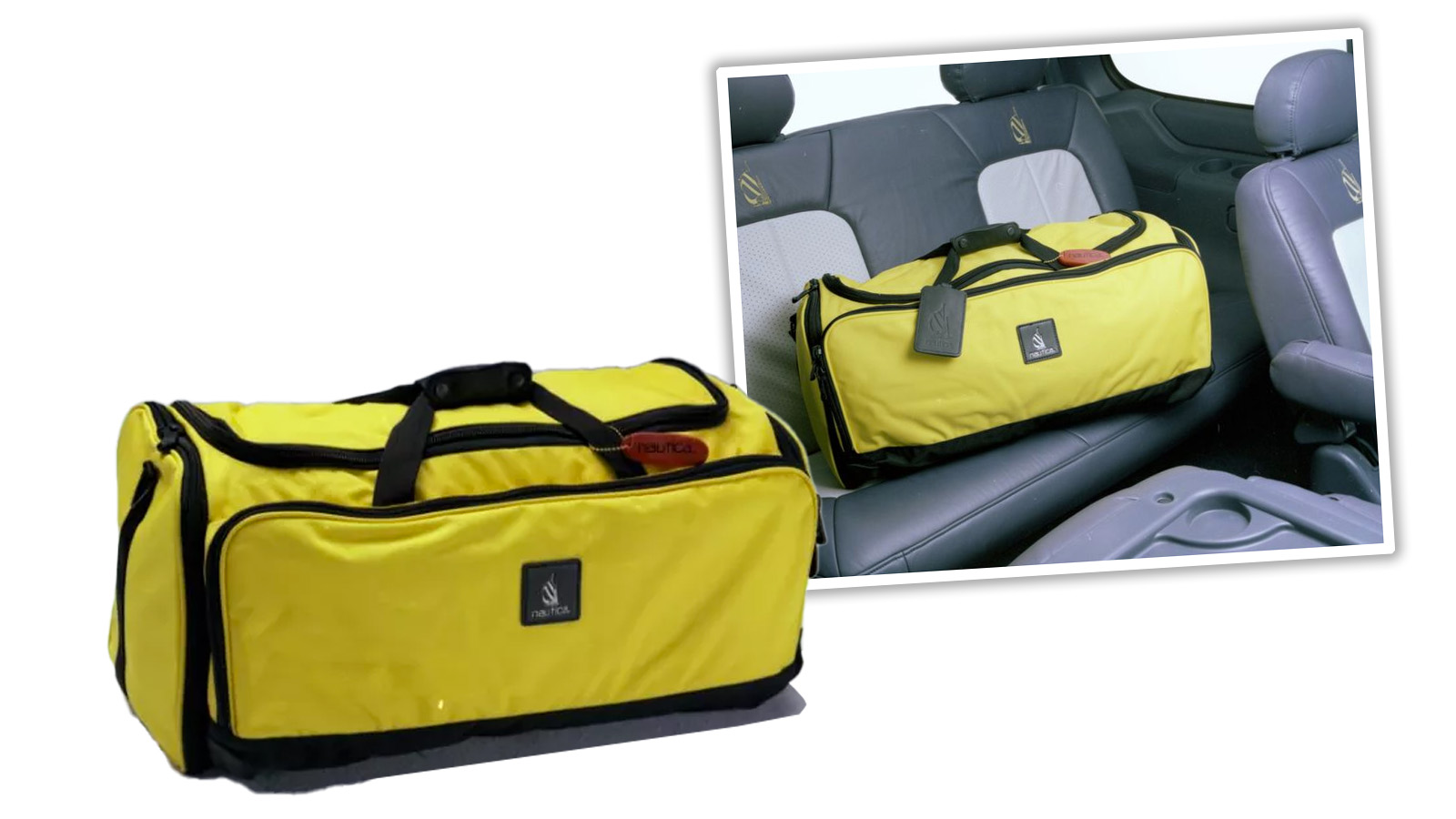 Just kidding! Nobody is paying shit for a 25 year old duffel bag. I mean, I hope they aren’t.

Now, personally, I feel that the Minivan Stigma is bullshit. Minivans are fantastic vehicles, wildly useful and potentially even fun, and people who shun them because they think they’re somehow seeming cooler in a crossover (they’re not) are delusional pawns of Big Insecurity.

That said, I can’t think of a better way to really push an otherwise forgettable minivan into the arms of dipshittery than to slather it in branding from a company that describes themselves like this:

Our story starts in 1983. Founder and designer, David Chu, had one clear vision: bring the inspiration of the sea to everyday style across the world. Starting with only six outerwear styles. he grew Nautica into a renowned global lifestyle brand with over 35 categories in more than 65 countries. Today, we continue to be defined by our original vision of reimagined nautical style. With a refreshed take on our heritage, we create high-quality fashion that delivers versatility and comfort.

Does this really count as “inspiration of the sea?” I’ve been to seafood places, I know what real “inspiration from the sea” should look like: 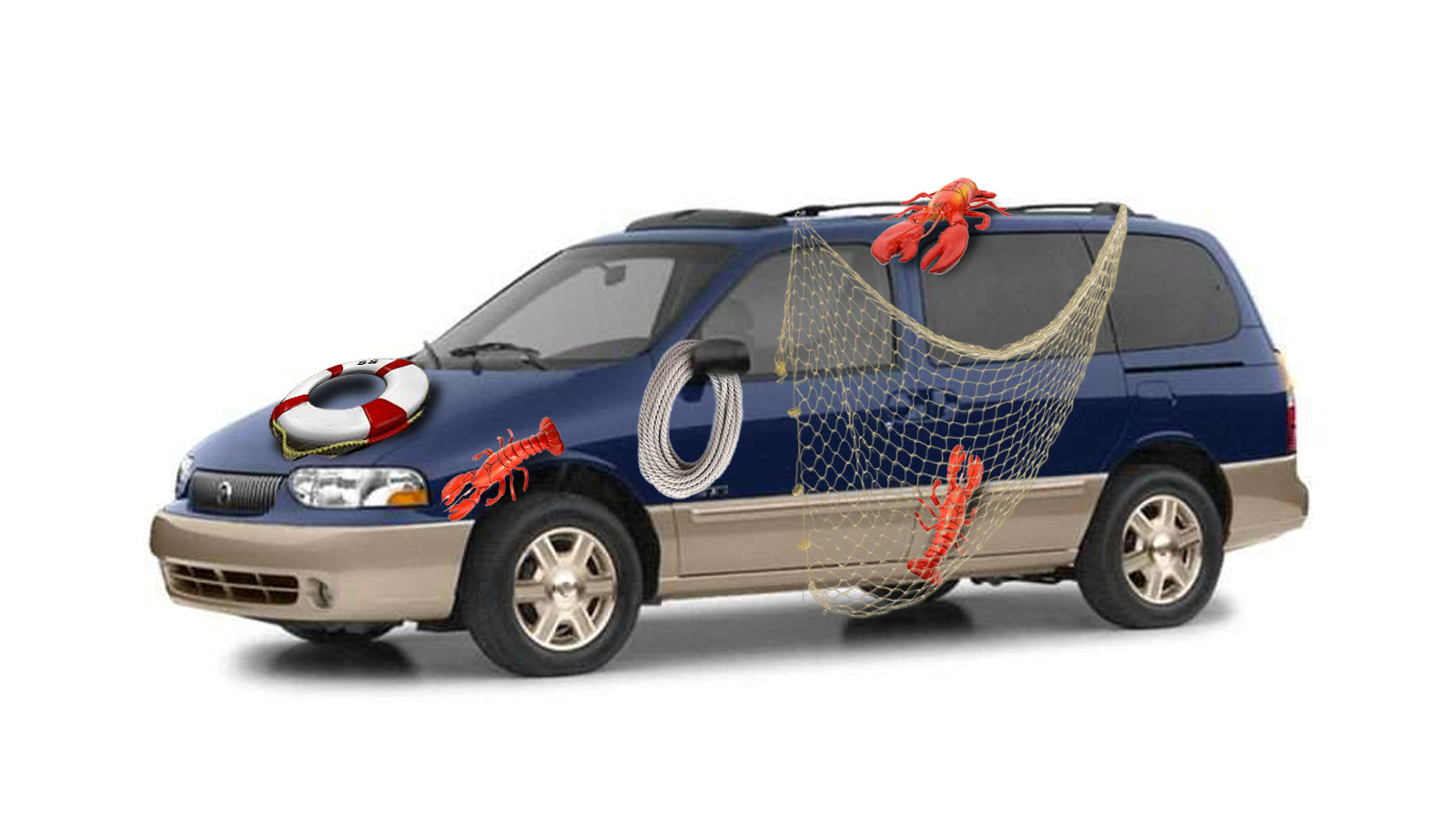 You guys really should have asked me first.

I'm a co-founder of the Autopian, the site you're on RIGHT NOW! I'm here to talk to you about taillights until you cry and beg me to stop, which I absolutely will not. Sorry. Hug? Also, David's friend.
Read All My Posts »
PrevPreviousThese Are The Only Two Small SUVs That Did A ‘Good’ Job Of Protecting Rear Passengers In New IIHS Test
NextHow A Pilot Turned An Airport Catering Truck Into A Sky-High Mechanical TreehouseNext