Well, well, well. After a month of waiting and a leaked Japanese spec sheet, Honda has finally released American specs and a feature list for the new Civic Type R. While the new Type R’s potency isn’t quite what we were hoping for given the leak, it still sounds like a proper riot. 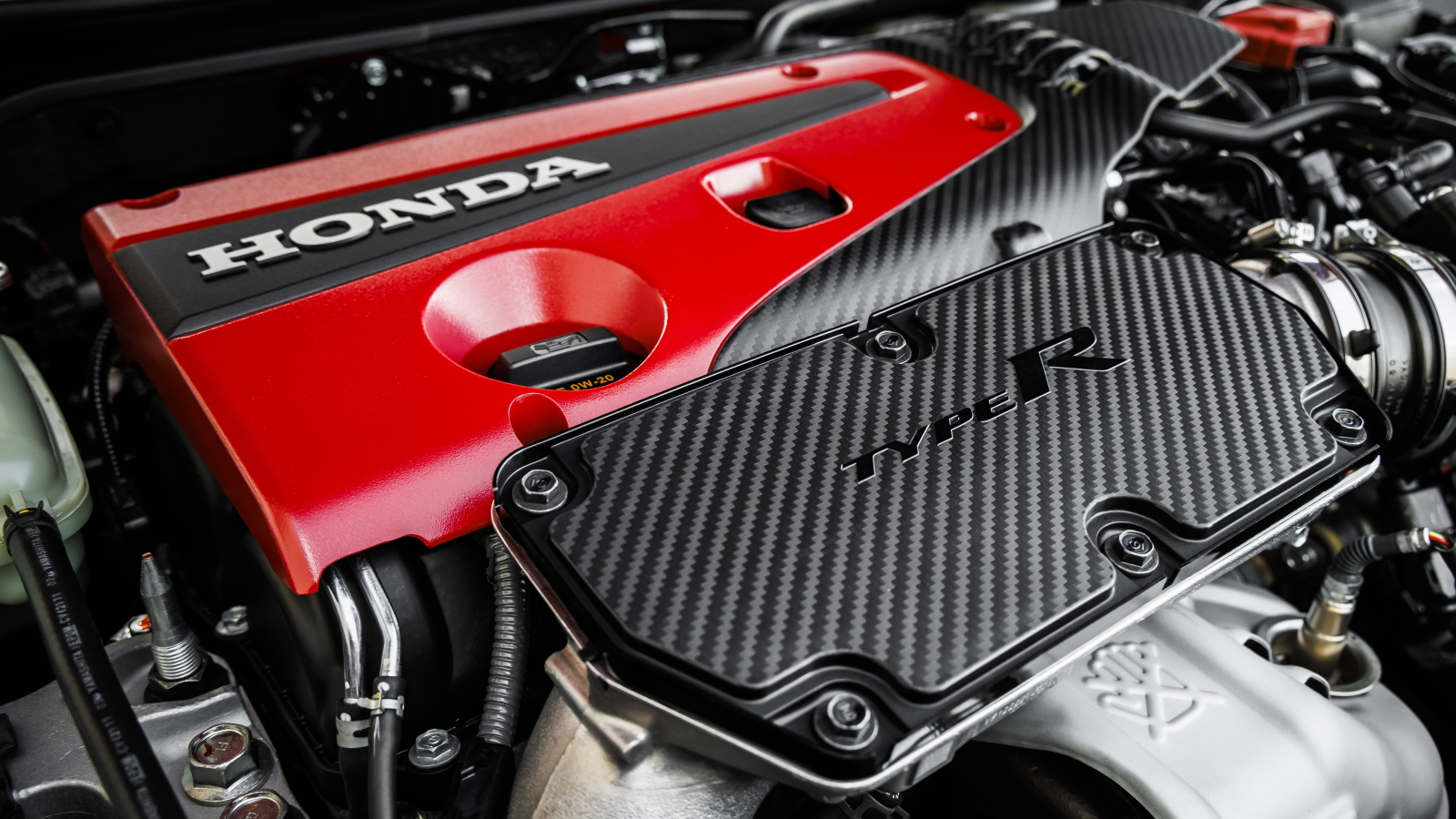 Let’s start with power, where the mildly disappointing word is that American Civic Type R models will only make 315 horsepower at 6,500 rpm. I’m not even mad, 306 horsepower in the last car felt like plenty so 315 should be alright in the new one. Peak torque of 310 lb-ft appears as a very nice plateau from 2,600 to 4,000 rpm, so we’re looking at a fairly broad power band. As with before, Honda’s using the K20C1 engine, a two-liter four-cylinder lump fed an impressive 23.3 psi of boost in this state of tune. Also like the old car, power goes to the ground the proper way, through a six-speed manual gearbox and a helical limited-slip differential as the hot hatch gods intended. Cooling was a little bit of an issue with the old Civic Type R, so Honda’s gone back to the drawing board, increased frontal opening area, thrown in a bigger radiator and paired it with a bigger fan. Fingers crossed that these tweaks will allow for longer track sessions.

Curiously, these K20C1 engines will have traveled thousands of miles before American Civic Type Rs make it onto dealer lots. While each odometer should show delivery miles, K20C1 engines are assembled in Ohio, shipped all the way to the Yorii Plant in Japan to be mated with bodies, then the finished cars will be shipped across the Pacific to American dealerships. It’s an unbelievable amount of effort and expense, but the K20C1 is an absolute gem so I’m not surprised Honda’s going to such lengths. 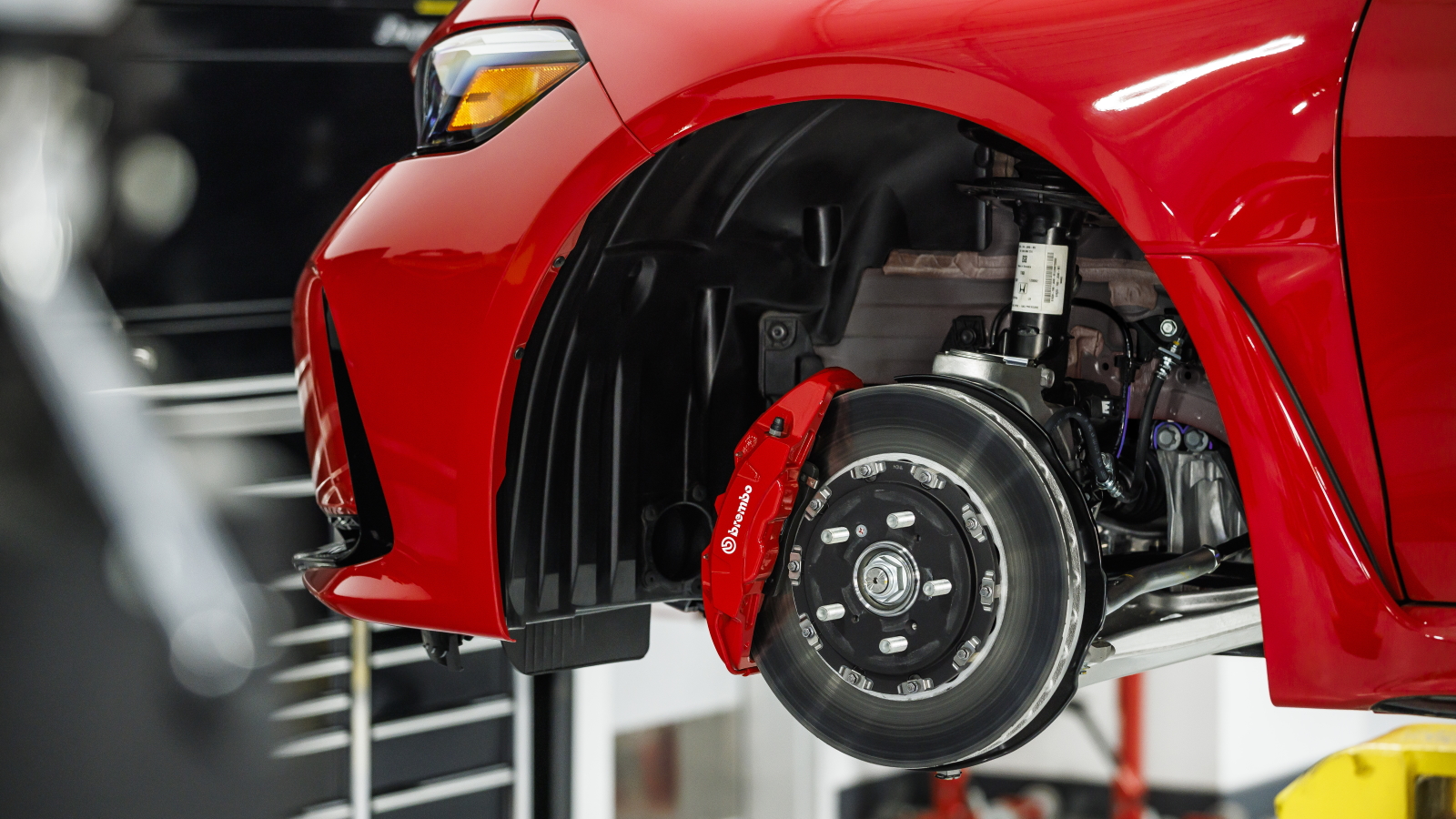 Right, that’s power covered, but what about handling? Well, the last Civic Type R had really quick steering, and the new car’s 11.6:1 steering ratio feels up to the task of continuing that genetic trait. However, the old car’s turning circle the size of Rhode Island hasn’t been exorcised. The new car requires curb-to-curb distance of 39.9 feet, almost five inches more than the last car needed and 2.4 inches more than a Cadillac Escalade requires. Woof. As expected, adaptive dampers are standard, while the new Civic Type R features a 29 mm hollow front anti-roll bar and a 20 mm solid rear anti-roll bar to help keep it flat through the corners.

Any performance car is usually only as good as its brakes, and brakes are generally limited by tire performance. To beef up stopping power, Honda has equipped the new Civic Type R with two-piece 13.8-inch front discs , four-piston aluminum front brake calipers, a retuned brake booster, and improved brake cooling that represent a significant overhaul of the braking system. As for tires, Honda’s chosen to employ the benchmark max performance summer tire, the Michelin PS4S, in square 265/30R19 sizing. An extra 0.2 inches of sidewall sounds quite nice for daily driving, while a slightly shorter tire circumference should give some pep back given the new car’s shorter final drive ratio. 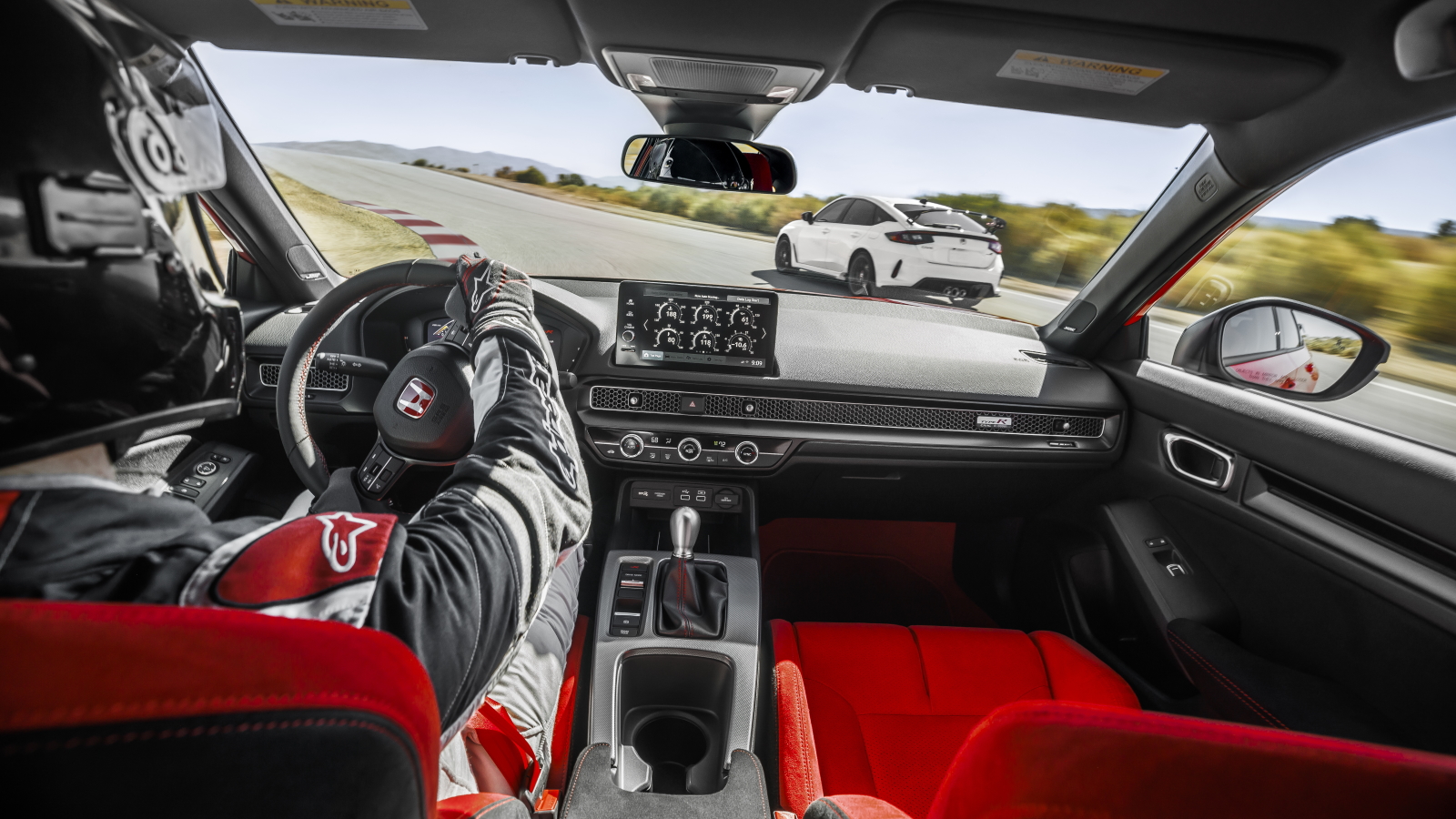 As the Civic Type R will be a daily driver for a lot of people, Honda’s amped up the feature content for the latest generation. Wireless Apple CarPlay and Android Auto come standard, as does a 12-speaker Bose stereo and wireless charging. There still aren’t heated seats or a heated steering wheel for cold-weather driving, but the rear wiper is said to have a heated zone for cold weather performance. Of all things to heat, this has to be the weirdest. There’s also still no center seat in the back, so the Civic Type R is strictly a four-passenger affair.

Other big developments include track telemetry that can be accessed through the infotainment system and confirmation of an actual color palette. Sure, Championship White is iconic, and both Crystal Black Pearl and Sonic Gray Pearl are agreeably neutral, but the Civic Type R is a hot hatch that should be had in good colors. Rallye Red isn’t just nice and bright, it’s a no-cost option, while boisterous Boost Blue Pearl is absolutely my pick of the bunch, Superman interior contrast be damned.

[Ed note: I’m ok with the Superman contrast, but I think it’s worth pointing out that it no longer looks like, as I just heard, “a Transformer mid-transformation” in our Autopian Slack (I’ll let you guess who said it). I am looking forward to the CTR stans coming in and defending the way the current one looks. It’s unique! This is a little less so but, also, a little more handsome in my view. – MH] 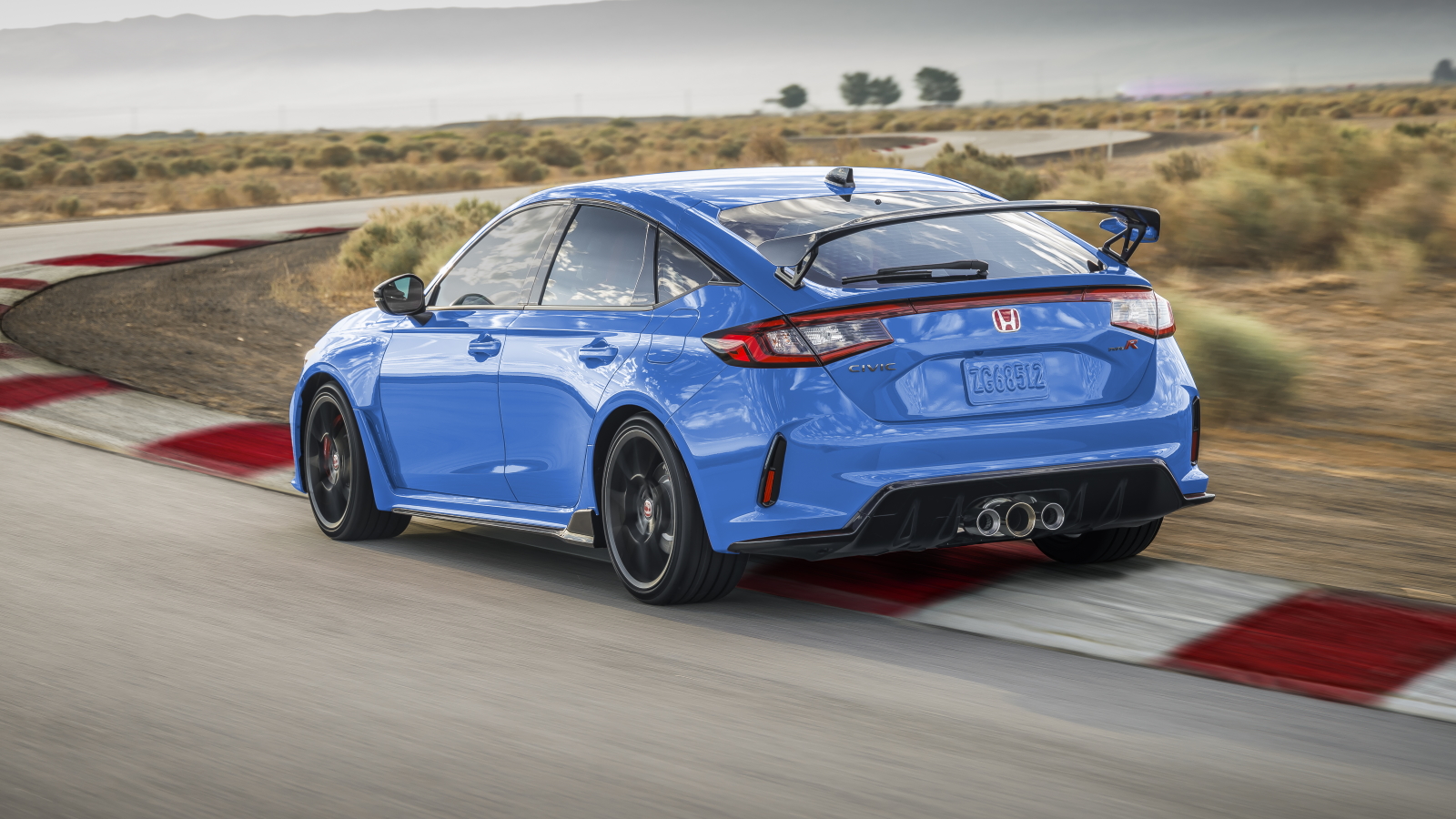 Between solid specs and a reasonable list of amenities, the new Civic Type R looks properly wicked. While it’ll face stiff competition in the form of the Volkswagen Golf R and Toyota GR Corolla, Honda’s hot hatch has a certain legacy that lets it enjoy loyalty and reverence. Besides, the last one was the best hot hatch I’d driven in ages, so I have fairly high hopes for the new one. Expect pricing to be announced closer to the Civic Type R’s autumn launch. Should performance and pricing prove similar to the last Type R, my bank account would be in serious danger.

Thomas is a Nu Rave-blaring, heel-toe downshifting, maple syrup-swilling, chassis-geeking, junkyard parts-hauling, floppy-haired scenester who's been writing about cars since college. His current ride is a 2006 BMW 325i with the six-speed manual gearbox. Instagram: @thomas.hundal Twitter: @thomashundal
Read All My Posts »
PrevPreviousMore Electrified Jeep Models Are Coming To Pull Stellantis Out Of The Past
NextOur Daydreaming Designer Re-Imagines Vector If They Made Amphibious SupercarsNext