Our Daydreaming Designer Re-Imagines Vector If They Made Amphibious Supercars

Here’s a scene from an alternate reality episode of the MTV-infuenced oh-so-eighties Miami Vice: 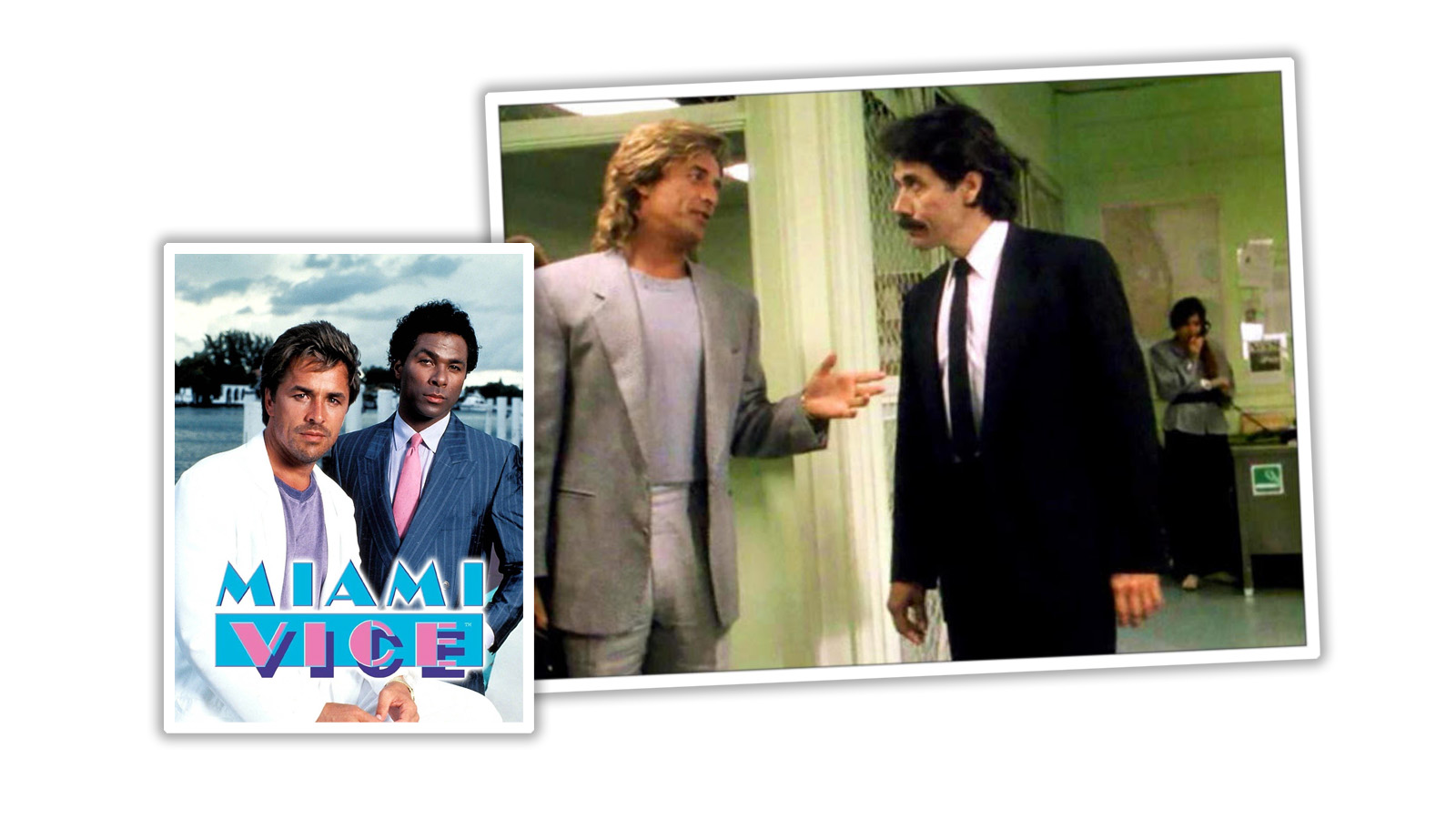 Sonny Crockett: “Lieutenant…the Testarossa still has a rod sticking out of the block, and the Donzi barely floats…I understand that we’re dealing with an entrenched bureaucracy and things take time but I can’t keep showing up at six figure drug deals in a Plymouth Reliant or some bass boat without blowing a departmentally approved cover, and…”

Keytar music starts to play as they walk into the back parking lot to see the nearly new 1989 Vector W15, freshly seized by the DEA–the fastest amphibious car on land and water ever made–if it existed, which it doesn’t. 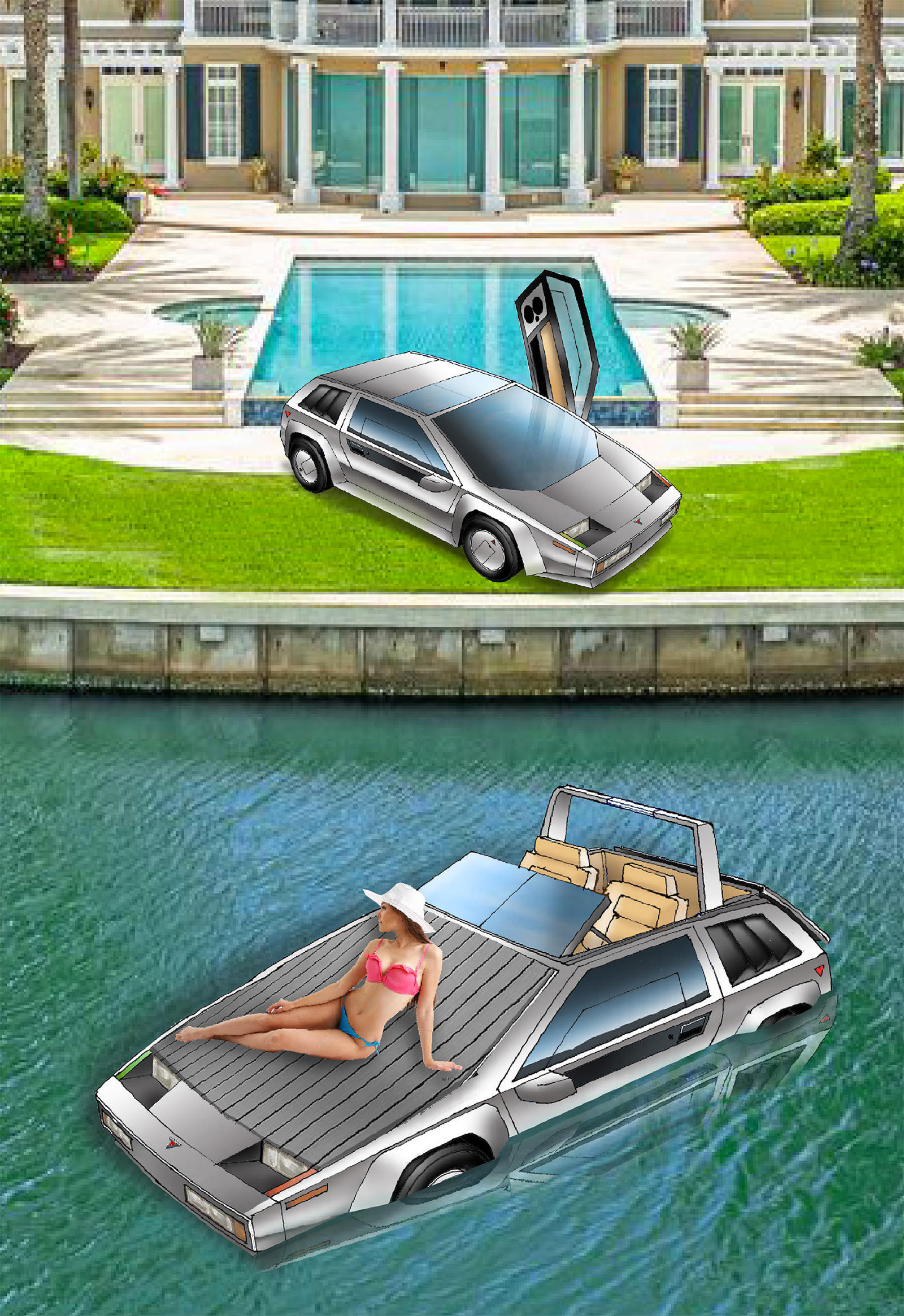 Our own Jason Torchinsky has tirelessly (well, at least a few times) argued about the viability of amphibious play vehicles, and he’s made a number of good points as to why they should exist.  However, even he would likely admit that any independent company attempting to seriously make an amphibious vehicle would have to be absurdly tenacious and borderline batshit crazy.

As it so happens, I know who would have been the perfect guy for the job.

If there is a person that could have beaten Malcolm Bricklin or even Donald Trump for self-promotion, it must have been Jerry Wiegert, the recently deceased designer and builder of an all-American hypercar called the Vector. 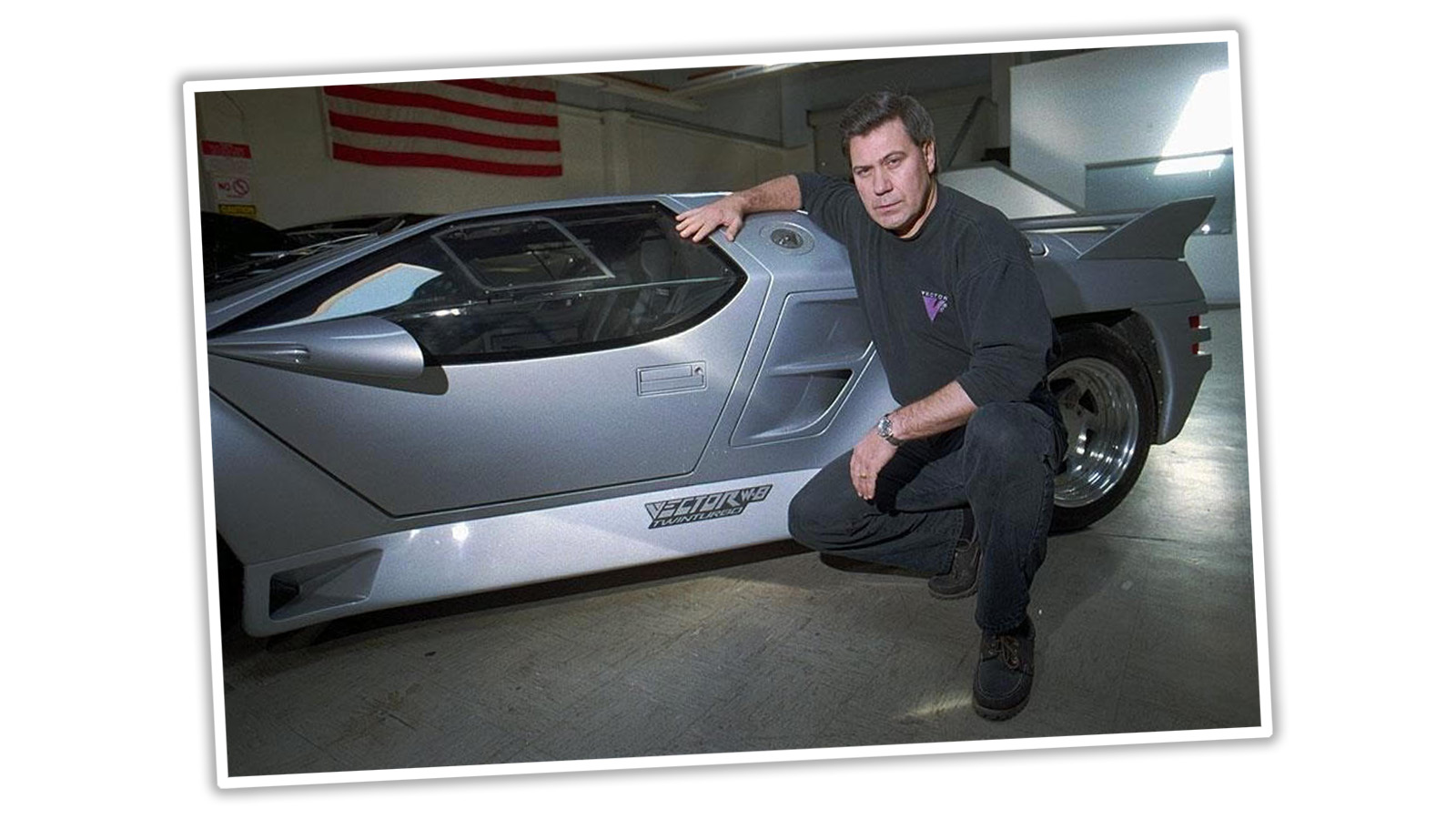 After attending CCS and Art Center, Weigert spent a decade developing his concept vehicle with ‘aircraft quality’ parts and ultimately plastering it on the cover of many, many car rags. Nobody outside of Jerry had actually driven it to test his four-second-to-60 claims, mind you, and the few production units would wait another ten years to appear, and they still barely ran.  Tennis star Andre Agassi demanded a refund when exhaust heat melted the carpeting in his Vector. 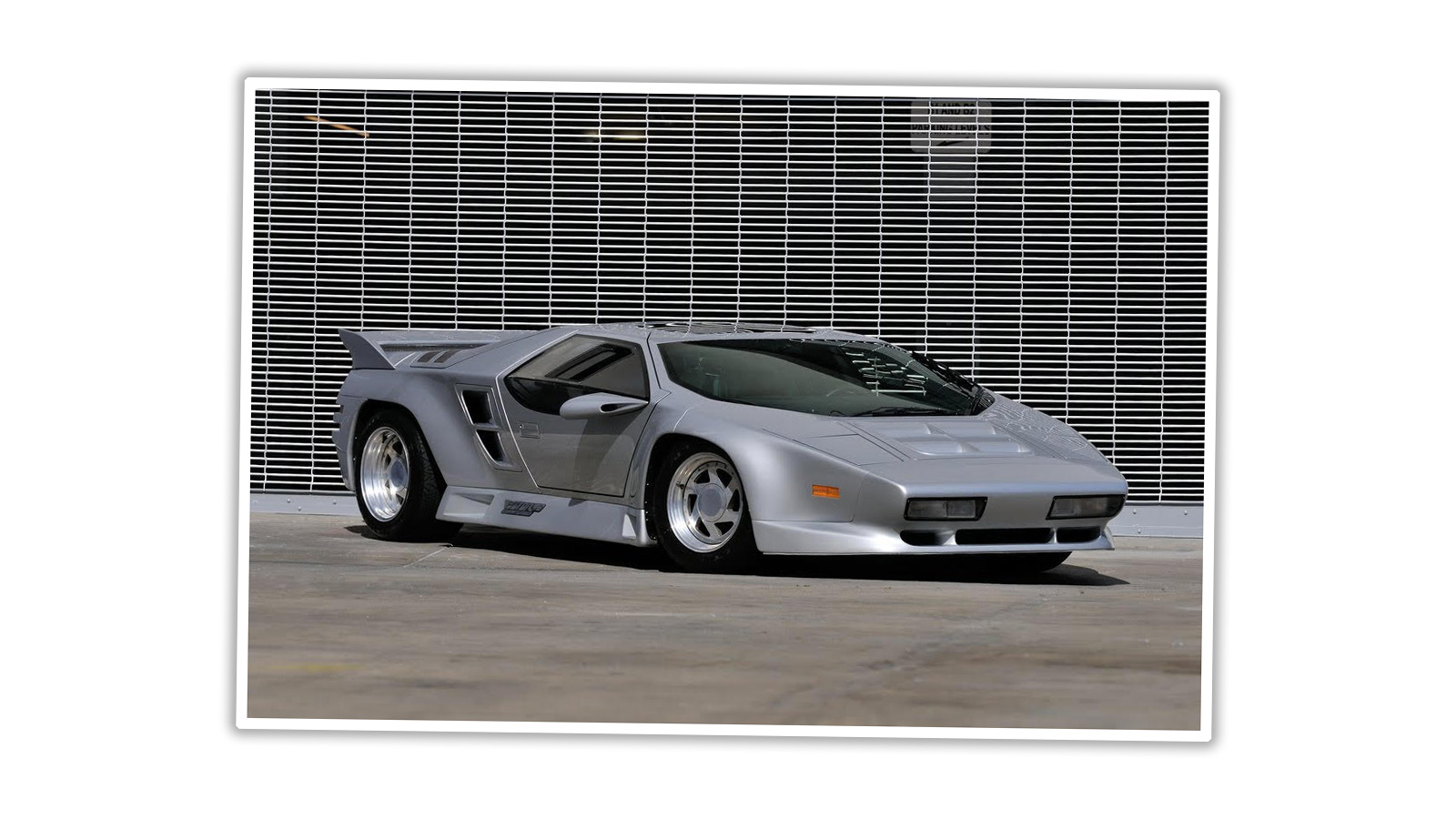 Like Delorean and Bricklin, the whole Vector ‘Aeromotive’ venture unsurprisingly failed (I know that he barricaded himself into his office with armed guards after the company was bought some investors) and he even lost ownership of the Vector name.

Did he give up after that? Of course not! His next venture was the ‘Aquajet’, an ultra fast ‘wet bike’ Jet Ski thing. Here are some later Vector cars coming to visit the site of this next endeavor. Note the Vector logo side marker light on the oh-so-1991 teal one…Ice Ice Baby!! 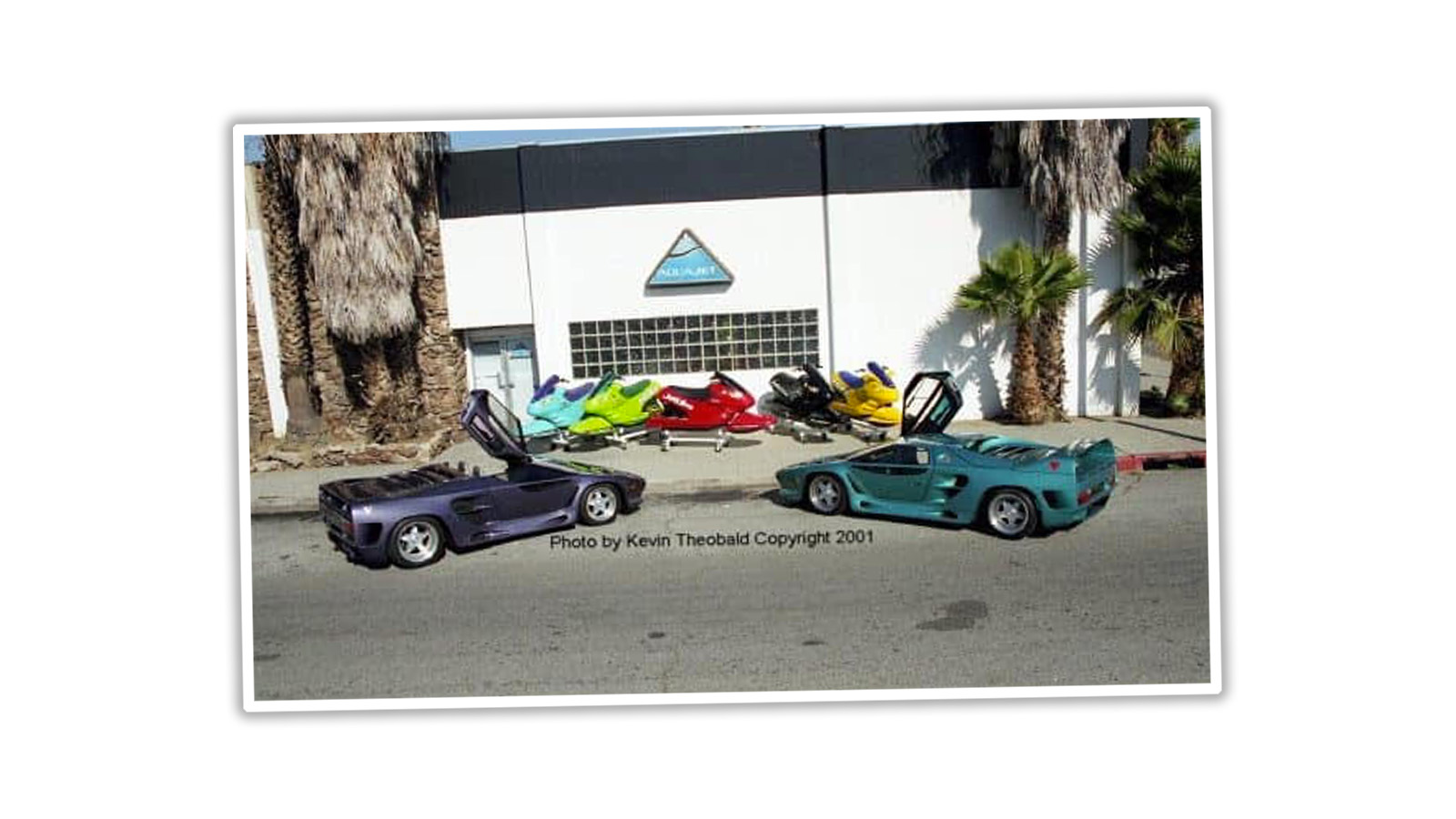 I honestly don’t know the fate of the AquaJet, but a quick search would indicate that it went the way of the Vector.

What went wrong?  A lot of things, but the main issue is that there were plenty of good options already for supercars and fast watercraft. When badge snobbery is more important than performance, you’re fighting a losing battle, even if your product works, which his essentially didn’t. You need to find something that NOBODY else offered.

What’s the alternate reality?  You Autopians are smart; you can see where this is going, right? Weigert could claim (legitimately) that no other person on earth had the experience in creating a supercar and a fast watercraft that he did, so he was the only one qualified to make a performance amphibious car.

Presenting the Vector W15, so named because the of the length of this thing as a boat…and a car, of course.

I need to add something to Torch’s assessment of most amphibious vehicles made- they usually end up looking like just a car plopped in the water. You’re out on the lake and pull up next to a guy in a Cobalt with everyone sunbathing and hanging out, and next thing you know you’re sitting in some floating car. Who wants that? Here is where the real difference would be from previous amphibians: The Vector W15 would have transformed into something more boatlike. The low, pointy body of the Vector really has more in common with a boat hull than a car anyway.

For this amphibious venture, Wiegert would have started with the same mid-engined format as the W2 and W8, and still be powered by a V8. The W8 had a racing engine that NEVER seemed to run right. I think he’d be better served by going back to a hopped-up bored out and twin turbocharged Corvette motor as in the earlier car. The W2 and W8 were automatics only, which makes the transmission situation easy for the amphibious car. He would have needed a transfer case to switch power from the rear wheels to the two steerable JetSki-type impellers. I’d put radiators on both sides of the motor, and I would LOVE to find a way to get the thing to be cooled by the raw water when it’s a boat; how could that work?

[Editor’s Note: This is exactly how lots of marine engine cooling systems work! They pump in the surrounding water into the water jacket, then pump the heated water out, at least for fresh water. There’s systems for sea water that transfer the heat from coolant to the seawater. Here, watch a video:

See, Bishop? There are still wonders in the world, even our tedious real world. – JT] 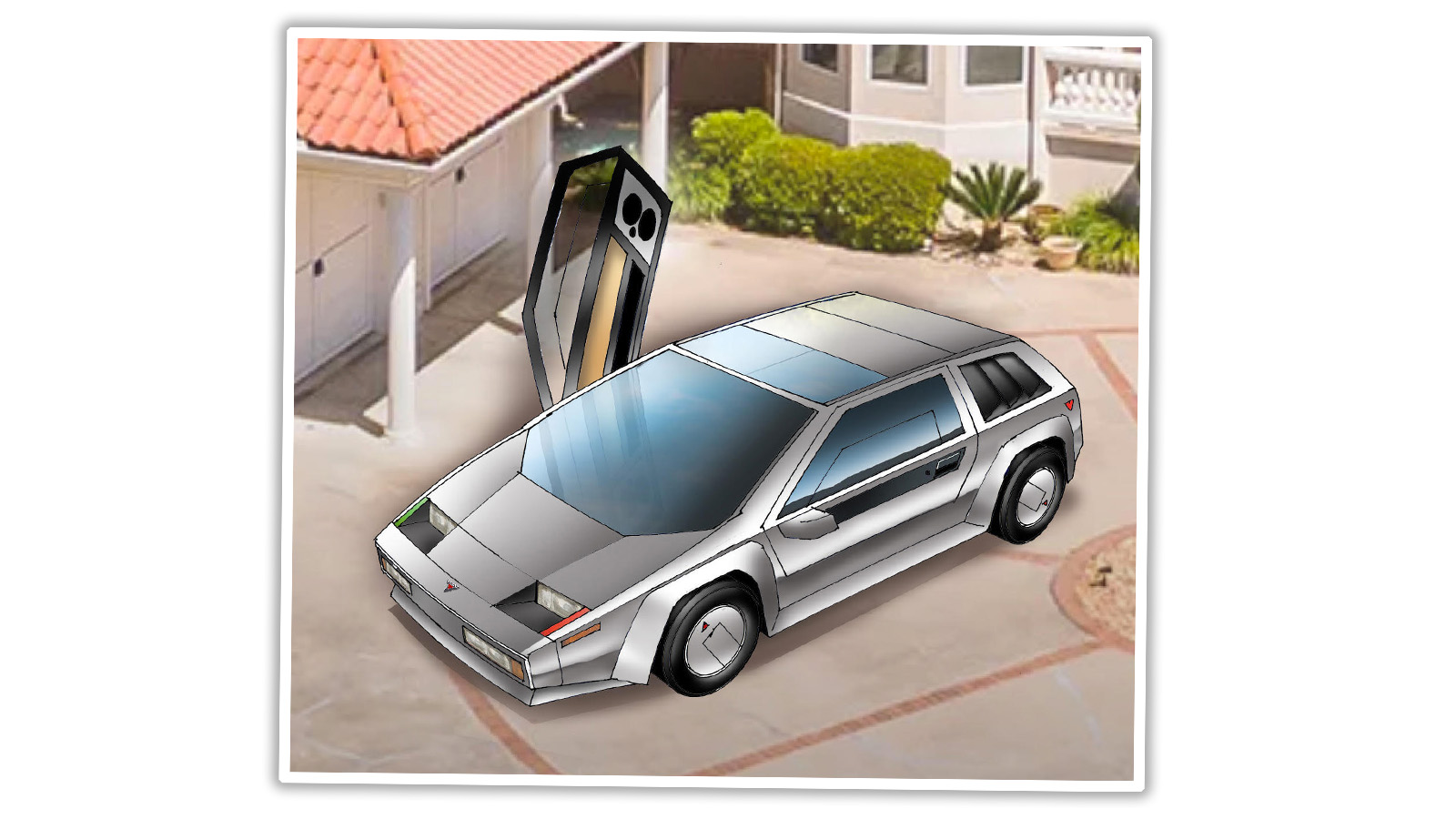 If at all possible an air/pneumatic suspension would have been great to suck the wheels up into the wells as far as possible to cut resistance in the water. The spoiler up front, used to create downforce on land, would have made the nose submarine in the water, so it would have needed to tilt to allow the nose to rise under power as a boat. I did a lot of extensive nautical research (meaning I did a google image search for ‘boat’ and looked at pictures of like five boats…maybe even six) and it’s obvious that the nose needs to sit high for the thing to look…you know…’boaty’. That’s a Navy term there, by the way. The Vector is designed so that while floating in water there is more buoyancy up front so that the car-which-is-now-a-boat has a more leaned-back stance. 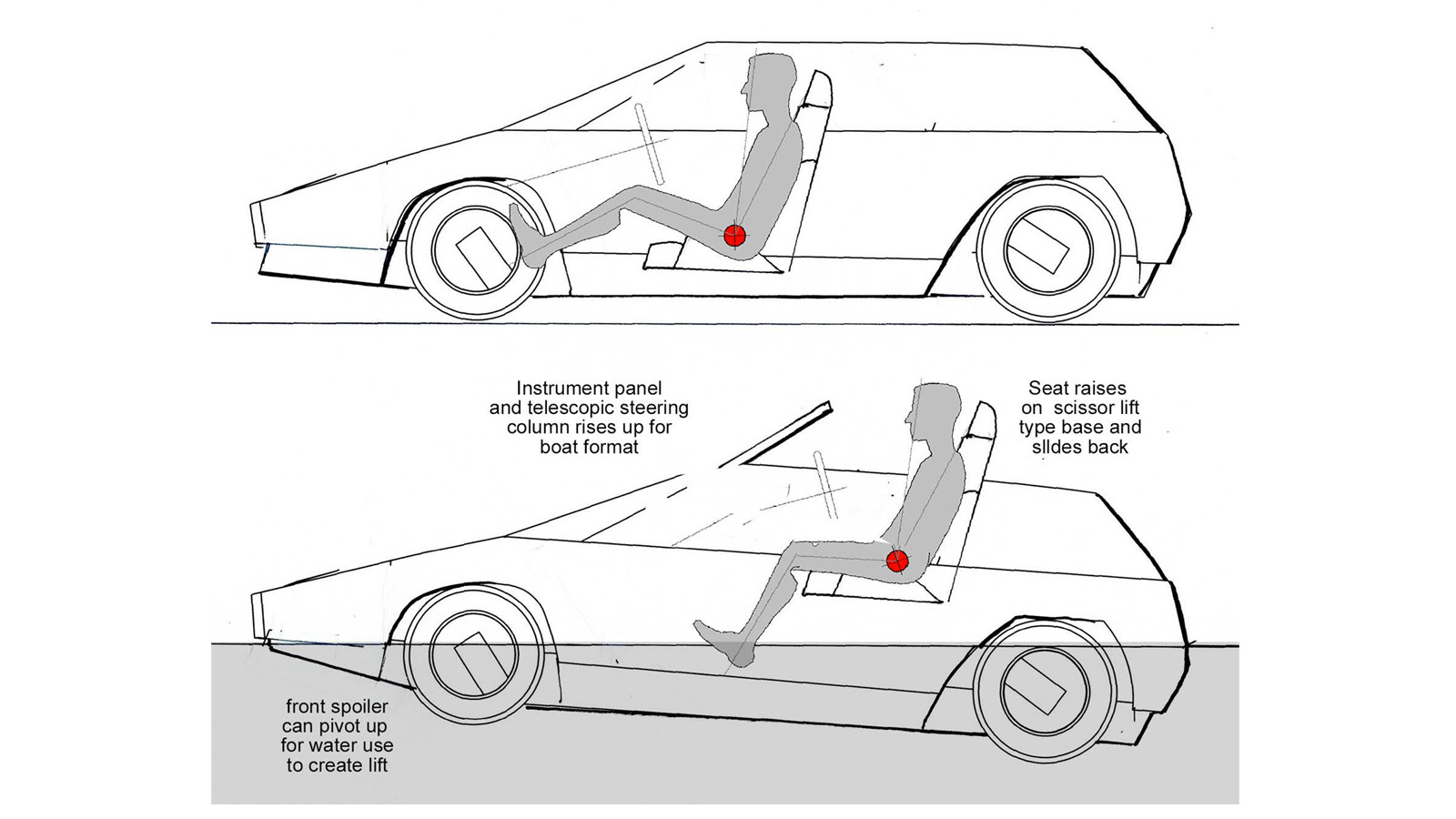 How would it have converted to a more ‘boatlike’ format? First, the glass sunroof would raise up and become the ‘boat’ windshield. Next, the seats would rise up on scissor-jack type mechanisms and let the driver and passenger poke through the roof. The controls/instrument panel would electrically slide up the A pillars when in this ‘flying bridge’ boat mode (by the way, as a ‘boat’ you could have kept it in car format if you wanted and drive it that way, sunroof closed…but there would have been an interlock so you couldn’t drive it as a car when you’re elevated out the sunroof!).

The instrument panel design itself mimics the one in the Vector W2 and W8, a slab-type affair that was supposed to simulate fighter jets (and also did not require complex production molds). Note that I used vacuum fluorescent displays and a Buick Rivera touch screen (why not take what already exists for something built in the dozens?) for climate and radio functions.  Also, there are lever controls for throttle and trim (for boat use) and the selector for the GM automatic transmission (car mode). I think we could make the boat throttle be able to drop down out of the way for car use. 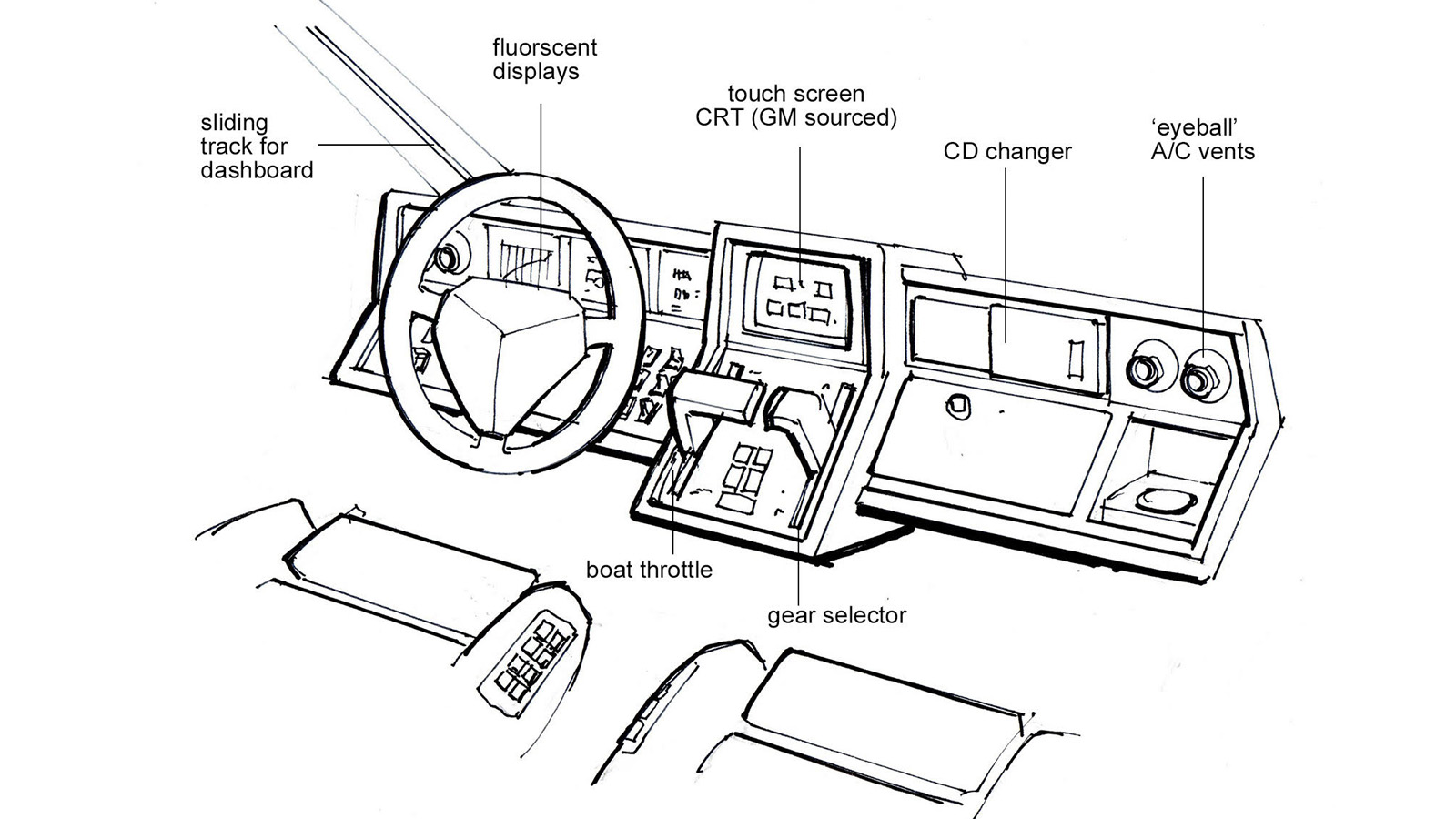 So why does my Vector amphicar look a bit like a wagon?  I wanted high air intakes for the motor (sort of like a VW Type 2, 3, or 4), and cargo space over the engine. The rearmost roof panel could tilt up at speed to create a rear spoiler (sorry..no insane wing in back of this thing).

There’s more tricks: After raising the windshield for boat format, the roof panels behind would have folded back to cover the backlight, giving a more traditional boat stern look and a place to put the name of your boat (practical question– can you name an amphibious car as a boat or is that a violation of nautical protocol? Or is there some superstitious thing that you shouldn’t do that?). 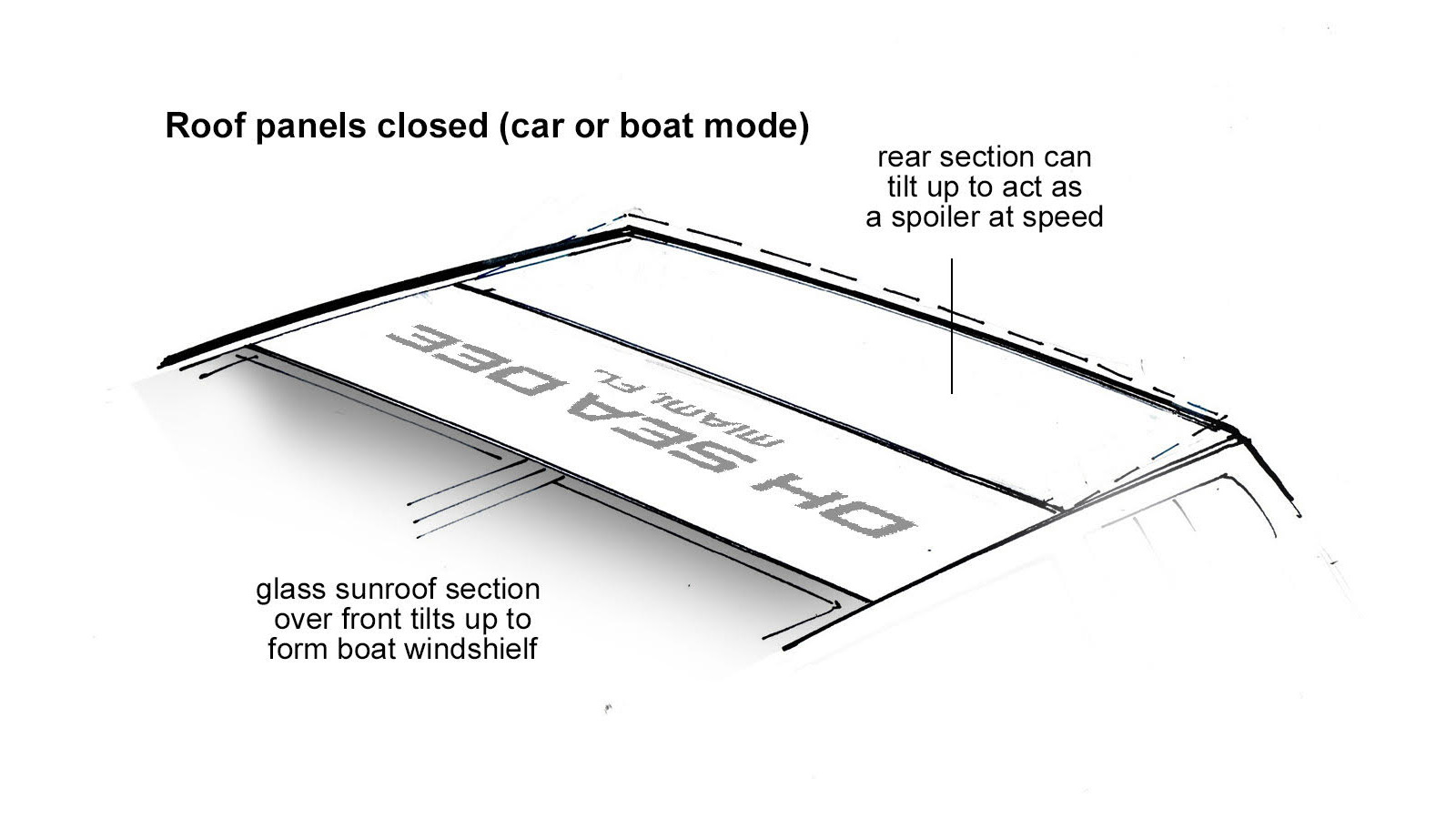 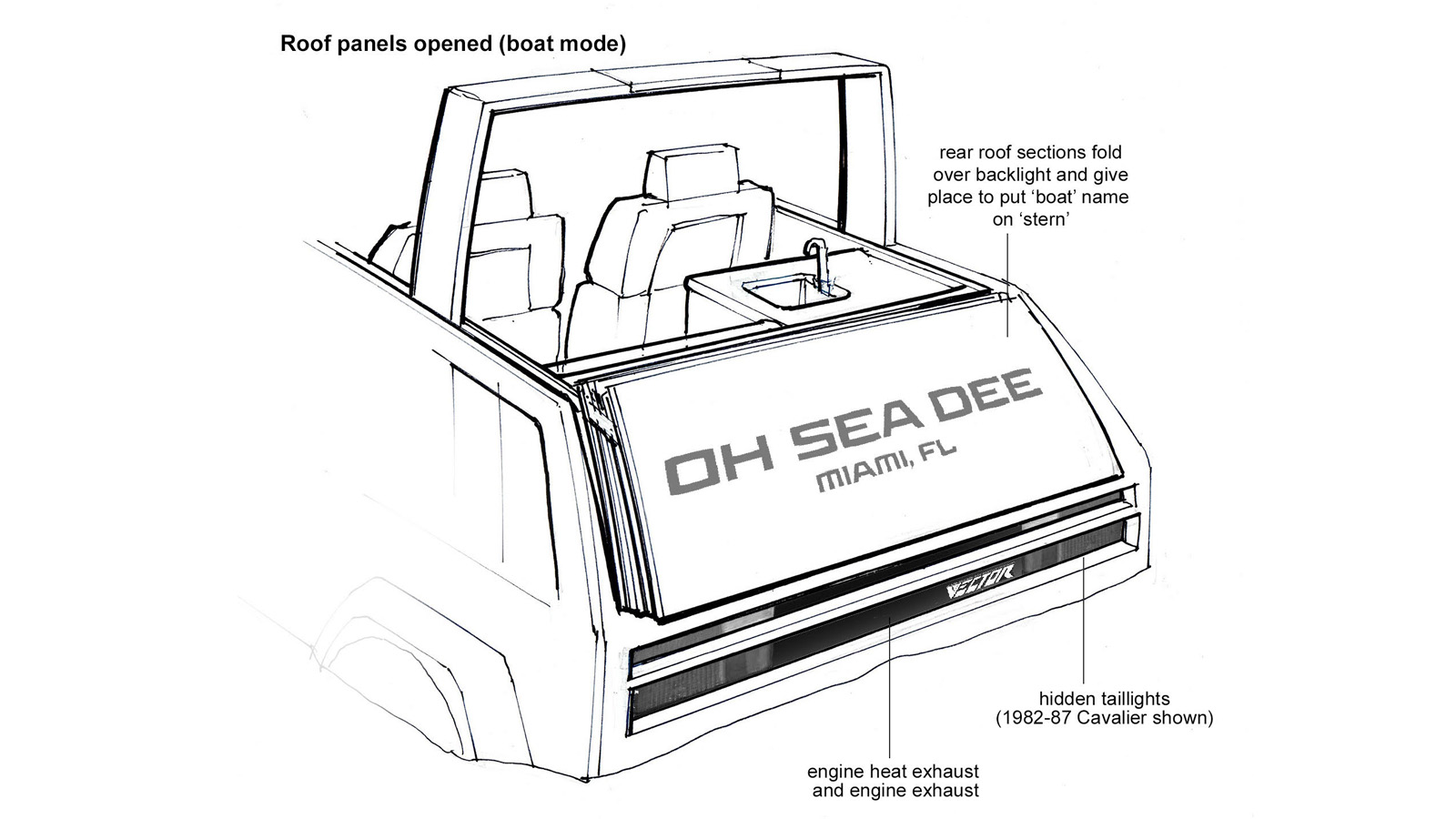 At the rear, note the ‘black hole’ slots which would have been for engine exhaust and heat exhaust, plus the taillights hidden behind there (anything would have worked, as long as they were flat..maybe upside down 1982-87 Cavalier taillights?) The rear license plate and back bumper are submerged when this amphibian is in the water.

So the Vector W15 would have given you everything except the kitchen sink! But an option would have existed to rectify that last omission!

With the rear roof panels open, the aforementioned cargo space over the engine would have been an open space for a variety of uses in boat mode. Options for this space could have included a wet bar (fold down faucet) with mini fridge or a small jump seat for a third person (you’d pretty much need to sit sideways) or a full width ‘couch’ (if you didn’t get the wet bar option). 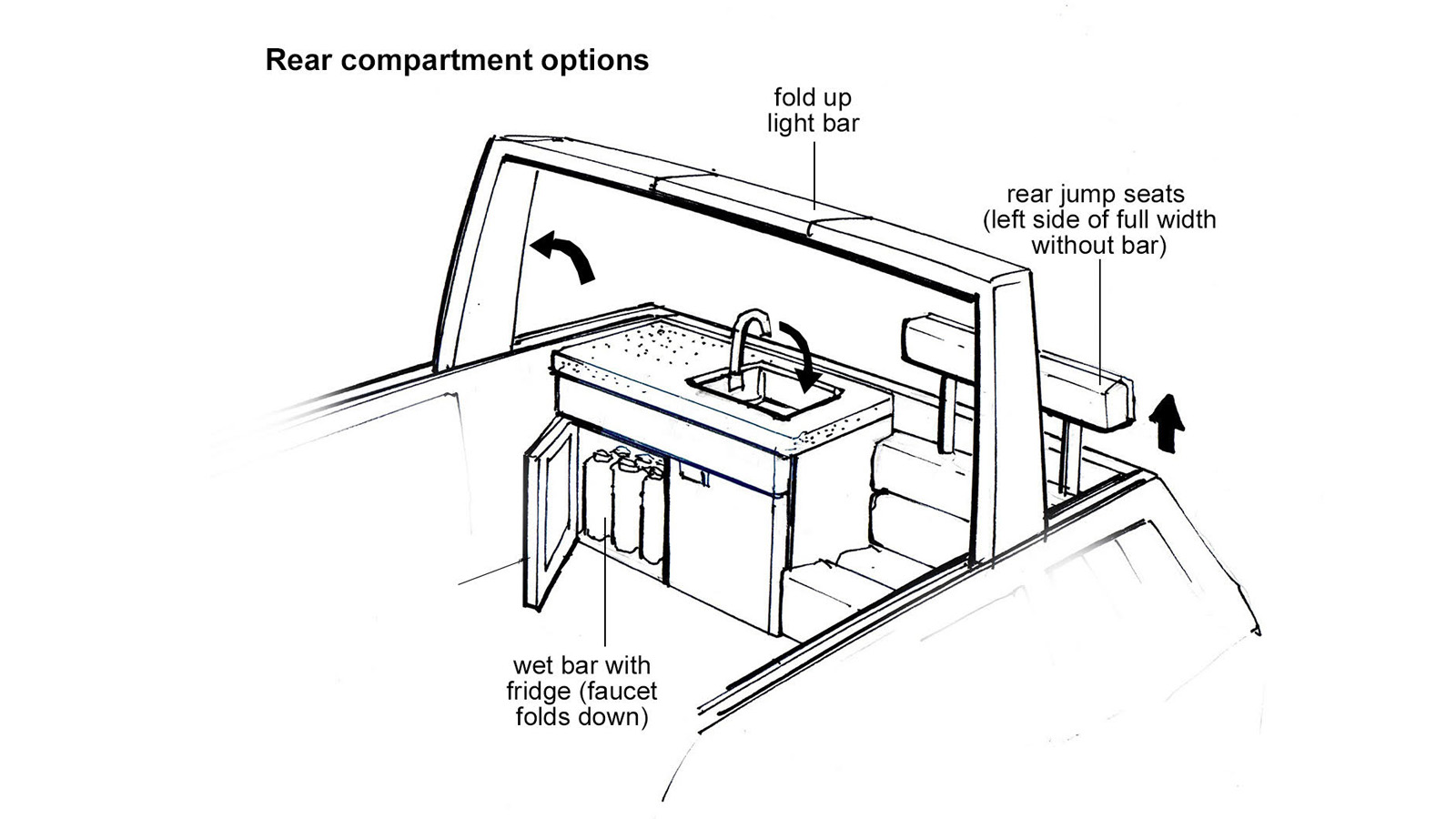 A flip up ‘light bar’ enhances the boat look and gives a place for the DOT approved elevated white light, and lights underneath as well for cabin glow. There could have been padding stored rolled up in the front trunk to throw on the hood/windshield to allow sunbathing like a forward deck (no pop up lights, just waterproof covered lights that include red/green navigation lights for boat mode). The padding would have hooked onto the front lip of the trunk lid, and would have magnets securing the sides, so it would have stayed in place even at speed.

Would it have sold? I think it could have. We’re not looking at some orthodontist that would have driven to work, he would have just gotten a 928GTS and kept some kind of boat at the yacht club (where his social life is based anyway). Look at who bought the few Vectors made: Arab sheiks and a tennis celebrity. It wouldn’t have been the fastest car or fastest boat available by any means, but guys like Andre likely had a half dozen fast cars and boats anyway, and I KNOW it would have been the fastest car that could turn into a boat by far. They’re all toys for this kind of buyer, and this would have been the ultimate party trick toy. The toy you can’t get anywhere else, so that’s the edge Jerry would get. And if it made in appearance every Friday night on NBC, who knows where Vector Aeromotive would be today.