The Mercedes-AMG ONE hypercar is finally ready, Toyota electrifies the Corolla Cross, Jaguar goes purple. All this and more on today’s issue of The Morning Dump.

The Production-Spec Mercedes-AMG ONE Is Finally Here 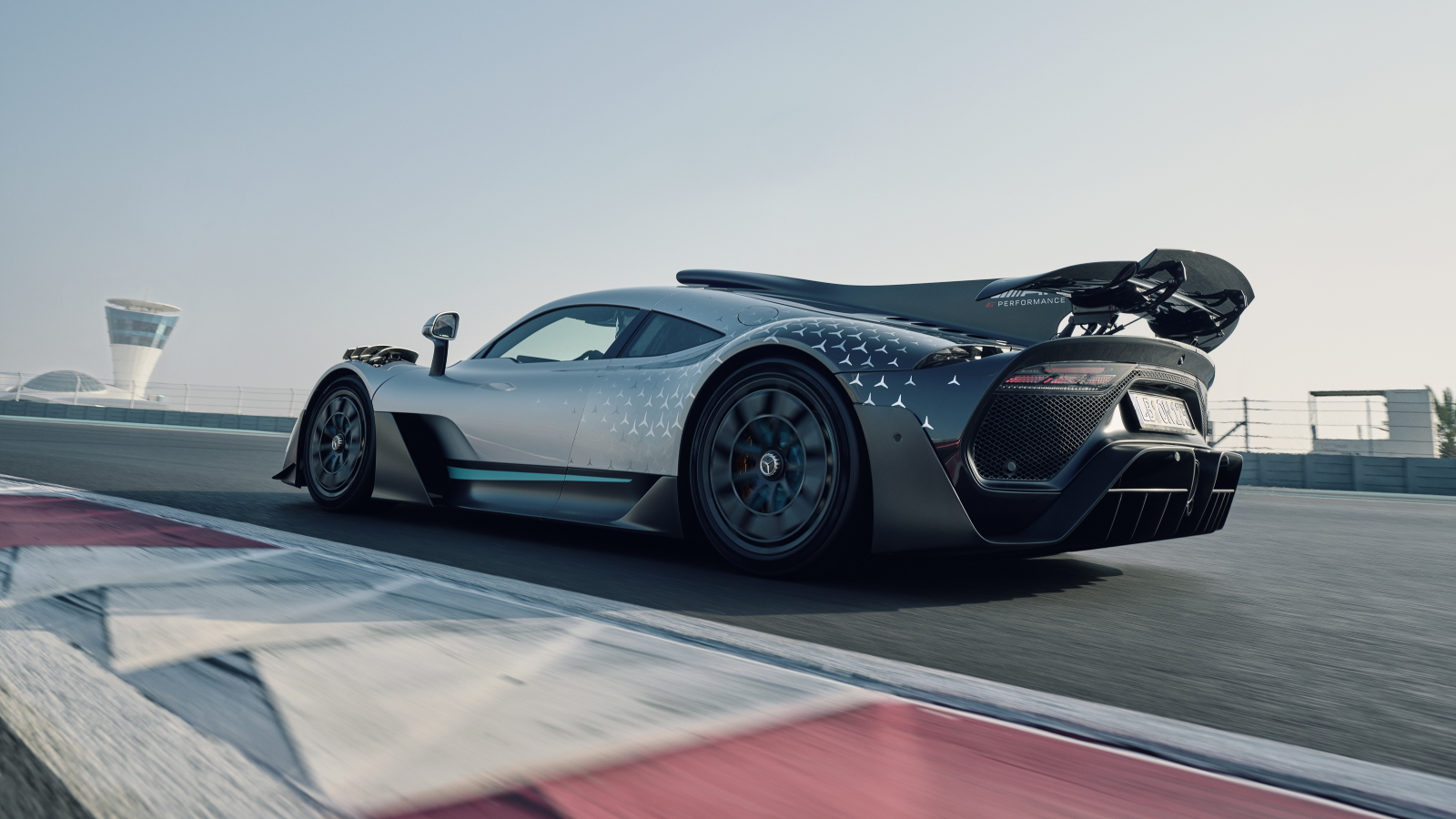 Photo credit: Mercedes-AMGIt took forever and a day, but the production model of the Mercedes-AMG ONE hypercar has finally been unveiled. Honestly, I have some thoughts about this plaything for billionaires, and they might be just a little bit cynical.

While electrification plays a big role in the Mercedes-AMG ONE, the crown jewel of the car is a 1.6-liter turbocharged V6 engine with an electric motor sandwiched between the turbocharger’s turbine and compressor wheels. It’s largely adapted from Mercedes’ 2016 W07 Formula One car, and revs to 11,000 rpm — no surprise changes here from the concept.

So how the hell do you get an F1 engine to pass emissions standards? Lots and lots of emissions equipment. Let’s start with the four preheated metal catalytic converters; they take a combined 16 kW of power to preheat. While they’re getting warmed up, the ONE creeps alone on electric power alone. Once the engine kicks on and sends exhaust gases through the four metal cats, the gases then pass through two ceramic catalytic converters and two gasoline particulate filters. This malaise era-esque contraption seems to do the trick, although it seems wild for an engine making 574 horsepower and putting power down through a seven-speed automated manual transaxle.

Combine the gasoline engine with a 120 kW (163 horsepower) electric motor on the crankshaft and two more 120 kW (163 horsepower) motors on the front axle, and you end up with a quoted combined 1,063 horsepower. If this all sounds like some hideously complex Rube Goldberg machine, you’re not entirely wrong. Mercedes-AMG claims that peak torque output isn’t even measurable and that the whole car has a DIN curb weight of 3,737 pounds (1695 kg). Ouch.

Hey, at least 1,063 horsepower gives this thing an impressive weight-to-power ratio of 3.515 pounds per horsepower. With all-wheel drive, the Mercedes-AMG ONE must feature proper hypercar acceleration, right? Well, kind of. AMG quotes a 0-124 mph (0-200 km/h) time of seven seconds flat, exactly the same time McLaren quotes for its 765LT pumped-up mid-weight supercar. AMG also quotes a 0-62 mph (0-100 km/h) time of 2.9 seconds, which almost feels a bit slow given the ONE’s hardware. In fact, AMG’s new hypercar only seems to really get going beyond 124 mph, taking a quoted 15.6 seconds to reach 186 mph (300 km/h) from a dead stop. A few seconds slower than Koenigsegg quotes for the Regera hypercar, nine tenths of a second quicker than a near-decade-old McLaren P1. I guess the bar for progress doesn’t always move so quickly.

Honestly, the Mercedes-AMG ONE sounds neat in concept, but I’m not so sure about the execution. It’s a car centered around an F1-derived engine, but Ferrari did that 27 years ago with the F50. Throw in the fact that we first saw it five years ago in prototype form, and it just doesn’t seem particularly groundbreaking. Maybe cornering is where the ONE’s real strength lies? Those front electric motors offer real torque vectoring, while specially-developed Michelin Cup 2R tires and pushrod suspension with adaptive dampers promise some serious stick.

[Editor’s Note: Personally, I kind of dig this. As an engineer, I badly want to look at the ONE up-close. I appreciate the car solely as a technical exercise, whether the performance numbers “decimate all” or not. But I see where Thomas is coming from, here. -DT]

Right, now that I’ve been a bit cynical, time for some optimism. While we as enthusiasts love hot Toyotas like the GR Supra, GR Corolla, and GR86, it’s often RAV4 Hybrid and Corolla Cross sales that allow fun performance cars to be made. As such, Toyota’s announced some upgrades to the Corolla Cross today and they feel like a really big deal. Jason Torchinsky is at Toyota’s equivalent of Coachella and is beaming us the latest intel on this new subcompact crossover.

Let’s start with the big news – the U.S.-market Corolla Cross Hybrid. While the standard Corolla Cross makes do with a perfectly sufficient 169 horsepower, this new hybrid variant cranks things up to 194 horsepower, which Toyota says in a press release will pull the 0-60 mph (0-96 km/h) time down to eight seconds flat. Shoutout to an electric motor on the rear axle for offering all-wheel-drive and making this very reasonable acceleration possible. Of course, if efficiency is more your mission, Toyota estimates that this small hybrid crossover will do 37 mpg combined. Not bad. The Corolla Cross Hybrid also gets revised styling. Some will say it’s ugly, some will say it’s good, I’m of the opinion that it just is. We’re talking about a front fascia that’s neither gorgeous nor offensive, what more could most people want?

Also on tap are new sportier S, SE, and XSE trims. They all get sport-tuned suspension, while SE and XSE trims get available two-tone paint including a nifty shade of hangover piss gold paired with a black roof. Honestly, nobody really cares about sportiness in a hybrid subcompact crossover, but everyone seems to care about connectivity. Surprise, all 2023 Corolla Cross models get Toyota’s latest infotainment system with wireless Apple CarPlay and wireless Android Auto. A welcome addition considering how low-res the infotainment system is in the 2022 Corolla Cross. Expect pricing to drop later this year, closer to when the 2023 Corolla Cross starts rolling out of Toyota and Mazda’s joint plant in Alabama.

The BMW X1 Gets A Lot Less Dorky

The first BMW X1 was kind of good. Take the basic concept behind the 3-Series wagon, jack it up a little bit, then chuck in the potent N55 three-liter turbocharged inline-six. The second-generation X1 was a bit of a mixed bag. BMW switched it to the front-wheel-drive platform underpinning the Mini Countryman, rounded off the edges, and made a lease special that was rather anonymous aside from the badge. With the new third-generation X1, BMW seems to be getting the hang of this front-wheel-drive thing.

Look, I’m not going to go all “burn the witch” on front-wheel-drive BMWs. Truth be told, nobody buying an entry-level premium crossover really cares about a rear-wheel-drive platform, but some distinctive design would be nice. Well, the fussy surfacing of the old model is gone, replaced with sharp styling and a relatively reasonably-sized pair of kidney grilles. The leading edge of the hood sits prouder, the silhouette is squared-off, and yet the drag coefficient is a pretty decent 0.27. Job well done.

On the inside, iDrive 8 takes center stage with a massive curved display. It’s not quite the same screen setup we’ve seen in the BMW i4, but I’m kind of glad it’s different. The passenger-facing edge features some neat angular sculpting that meshes well with the X1’s design. The available wireless charger also seems to be well-located in the center console, it keeps a phone vertical and clasps it into place, a pretty nice touch for passengers who want to monitor state of charge.

There’s good news under the skin too. All-wheel-drive is now standard equipment, and the eight-speed torque-converter automatic gearbox has been ditched in favor of a seven-speed dual-clutch transmission. This gearbox enables the left paddle shifter on M Sport models to do something really neat – hold it for at least a full second and the powertrain goes into sport mode and a low gear for maximum response. Power and torque are also up, this new X1 cranks out a solid 241 horsepower and a very stout 295 lb.-ft. of torque. BMW quotes a 0-60 mph (0-96 km/h) time of just 6.1 seconds in the X1’s press release which actually sounds pretty quick.

Another thing I like the sound of is the new X1’s pricing. Including a $995 freight charge, it’s set to go on sale in America from $39,595. That’s honestly not terrible, especially when factoring in standard all-wheel-drive. You get a lot for $39,595 as well, from navigation to LED headlights to a power tailgate. Expect the 2023 BMW X1 to go on sale in the fourth quarter of 2022 and immediately be found in condominium parking garages across the nation.

Alright, I’ll admit it. I’m a sucker for purple cars, I’m a sucker for gold wheels and trim, and I’m a sucker for massively characterful engines. To celebrate Jaguar’s 1988 24 Hours of LeMans win, the marque’s SVO customization arm has funneled the aforementioned trifecta into an F-Pace SUV to create something ridiculously cool.

Called the F-Pace SVR Edition 1988, this supercharged super-SUV looks and goes the absolute business. The paint is called Midnight Amethyst Gloss and it looks positively pitch black until the sun hits it, at which point it bursts into life. Sweet. Also sweet are the light gold wheels and the return of massive amounts of gold trim on a luxury car. While the gold-plated-everything package your dentist had on their Lexus in the ‘90s isn’t to everyone’s taste, Jaguar’s kept things subtle and matte, while carrying that trim through to the interior. Lovely. Of course, show is nothing without go, and the F-Pace SVR is an angry Howitzer shell of a crossover. Its supercharged five-liter V8 pumps out 550 horsepower and will let everyone in a two-mile radius know you’ve arrived. It’s potent enough to rocket this crossover SUV to 60 mph (96 km/h) in a Jaguar-claimed 3.8 seconds, pretty swift stuff. What a fabulous engine, I’ll be genuinely sad to see it go.

If you happen to be rich and absolutely frothing at the taint for this colorway, you might want to act quickly. Jaguar’s only making 394 of these special F-Pace SVRs, one for each lap completed by the LeMans-winning XJR-9 LM. Pricing is set at $111,150 which honestly doesn’t seem that bad. Since the Mercedes-AMG GLC 63 doesn’t seem to be available right now, what else in this segment offers V8 thrust?

Whelp, time to drop the lid on this edition of The Morning Dump. It’s the middle of the week, so why not play a game? This special Jag’s got me thinking. Let’s say that you can now order any new car in any current or historic color from any manufacturer. Oh, and you just hit the Powerball so cost isn’t an issue. What car would you order and what color would you spec it in? I think I’d end up with a Nissan Z in Lamborghini’s Verde Ermes green.

Thomas is a Nu Rave-blaring, heel-toe downshifting, maple syrup-swilling, chassis-geeking, junkyard parts-hauling, floppy-haired scenester who's been writing about cars since college. His current ride is a 2006 BMW 325i with the six-speed manual gearbox. Instagram: @thomas.hundal Twitter: @thomashundal
Read All My Posts »
PrevPreviousThe 2023 Toyota GR Corolla Morizo Edition Is A Lightweight Version Of The GR Corolla With No Rear Seats, No Rear Window Motors, And No Rear Speakers
NextHow I Would Design A Modern Cabover Pickup Truck: A Car Designer Sketches Your IdeasNext