The U.S. Version Of The Volkswagen ID.Buzz Retro Electric Van Is Going To Get Longer And Faster

While Americans will have to wait until 2024 for the Volkswagen ID.Buzz, a North American launch is far from the only thing to look forward to regarding the ID.Buzz line. The German brand put out a really neat slide deck for investors on the future of the reborn microbus, and it’s full of interesting details. Let’s take a look at what Volkswagen has planned for the ID.Buzz, starting with a seven-seat variant.

Interestingly, the seven-seat version adopts a 2-3-2 seating layout, with a three-person bench in the middle. While this is great news for occasional third-row users, it doesn’t provide walk-through access for families really looking to get the most out of the third row. However, this configuration could very well change by the time the ID.Buzz comes to America as it appears the three-row model pictured is based on the European short wheelbase variant. 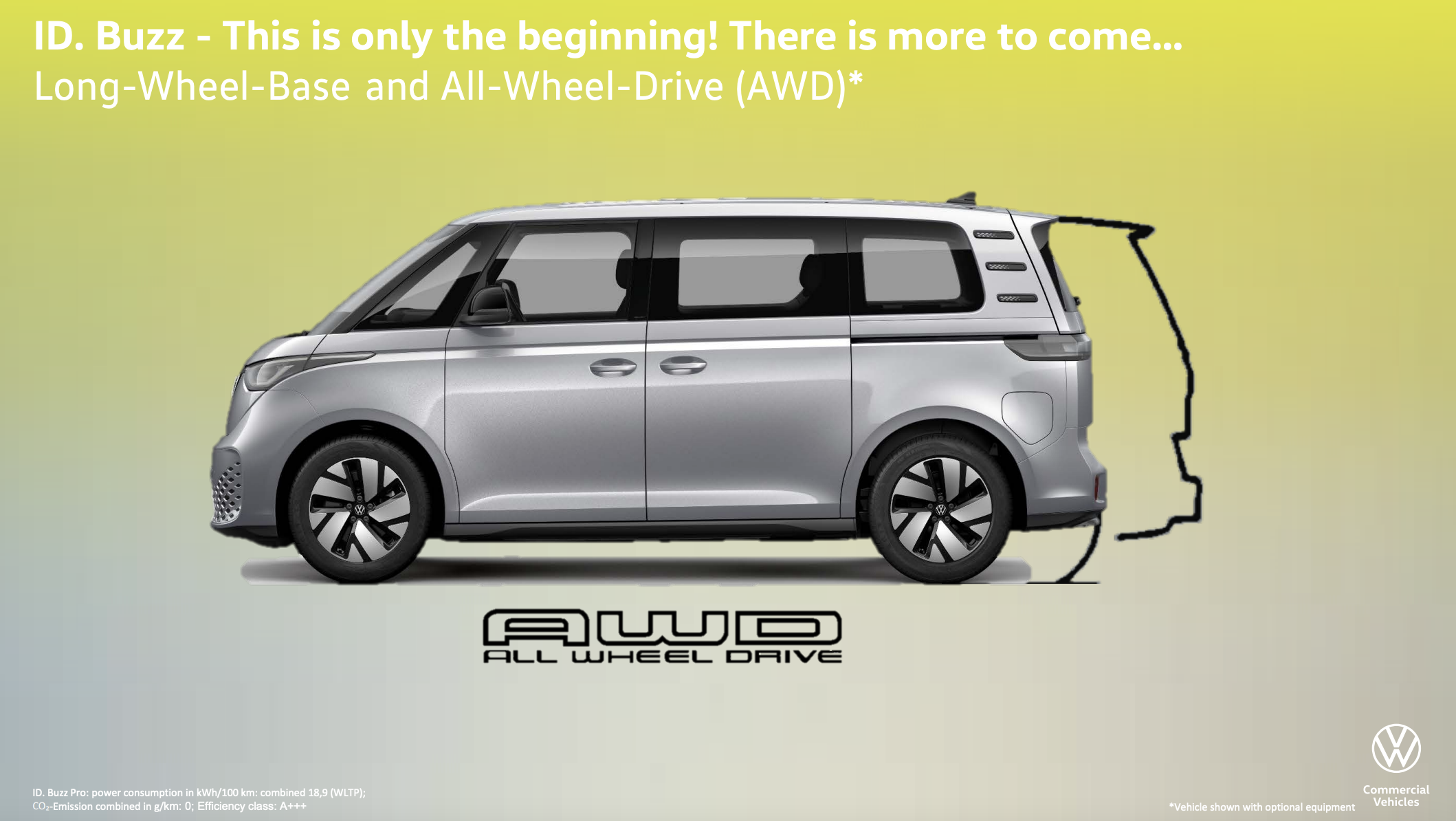 Interestingly enough, there is a teaser of an extended-wheelbase ID.Buzz in an earlier slide. However, just because a silhouette exists doesn’t mean it’s to scale. After all, if I just use absolutely the bare minimum effort in Photoshop to sort-of, kind-of stretch the ID.Buzz’s wheelbase to match the new silhouette, I end up with something like this.

Yeah, I don’t know about the execution here, and save for moving the whole B-pillar back, this might essentially be the most elegant way of doing a long-wheelbase ID.Buzz. It’s possible that Volkswagen will add metal both to the rear door and aft of the rear door, but we won’t know until the camo comes off. That being said, long-ass sliding doors might actually enhance third-row entry and egress should American models stick with a 2-3-2 seating configuration. After all, why go to the trouble of re-engineering seats?

Alright, moving on. All-wheel-drive isn’t a surprising addition at all, given how the ID.4 is available with motors front and rear. All-wheel-drive is pretty important if you’re going to sell a car in North America’s snow belt, and the same 295 horsepower as the all-wheel-drive ID.4 would make the ID.Buzz quite sprightly for a tower block on wheels. There’s something amusingly perverse about sitting nine yards off the ground while clicking off a reasonably quick zero-to-sixty time, so fingers crossed the all-wheel-drive ID.Buzz achieves that sensation.

Finally, here’s something more exciting – there’s a hot GTX version of the ID.Buzz coming. Performance vans aren’t exactly common, so it’s nice that Volkswagen’s launching a one-box cannonball into the weird car pool. I wouldn’t expect any more power than a standard model with the big battery pack and all-wheel-drive, but expect sports suspension and some natty visual alterations at the minimum. Actually, think 2011 Toyota Sienna SE but electric. I’d be quite alright with that.

While the ID.Buzz made quite a splash for a concept finally executed more than 20 years after the 2001 Microbus concept, it’s clear that Volkswagen is far from done with its reborn bus. While the standard ID.Buzz offers a fairly uneventful driving experience, more power and an available sporty trim should liven things up nicely.