The Way These Oil Pressure Gauges Are Labeled Seems Bonkers 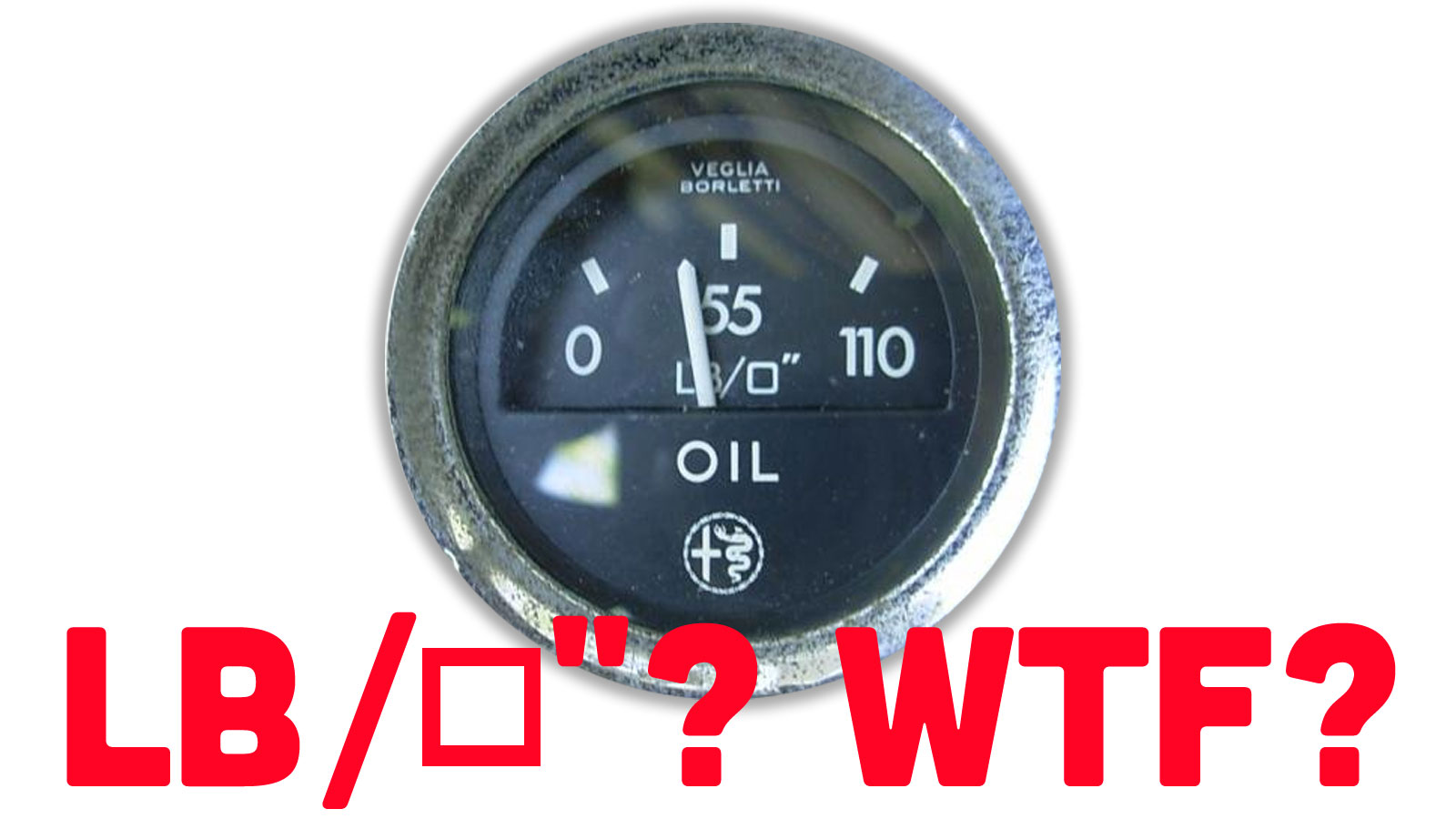 I’m interested in the way our cars communicate with us. I think that’s why I’m so interested in indicators and taillights, and on the inside of cars, gauges. Gauges are especially interesting because while taillights and turn signals are how we use the car to communicate to other drivers, gauges tell us information directly from the car. No puppeteering involved, those little moving needles or digital digits are your car’s bits talking right to you. The way we choose to frame the information on gauges is interesting, too – I’ve explored it for fuel gauges a couple times, but today I was introduced to a really strange labeling convention for oil pressure gauges, and I needed to show all of you, stat. So, put your dropcloth down just in case this shocks any fluids out of you.

I was alerted to this by a reader named Nick who saw this interesting Reddit post, which showed an oil pressure gauge (in what I think is an old Alfa Romeo or maybe Fiat) that looked like this: 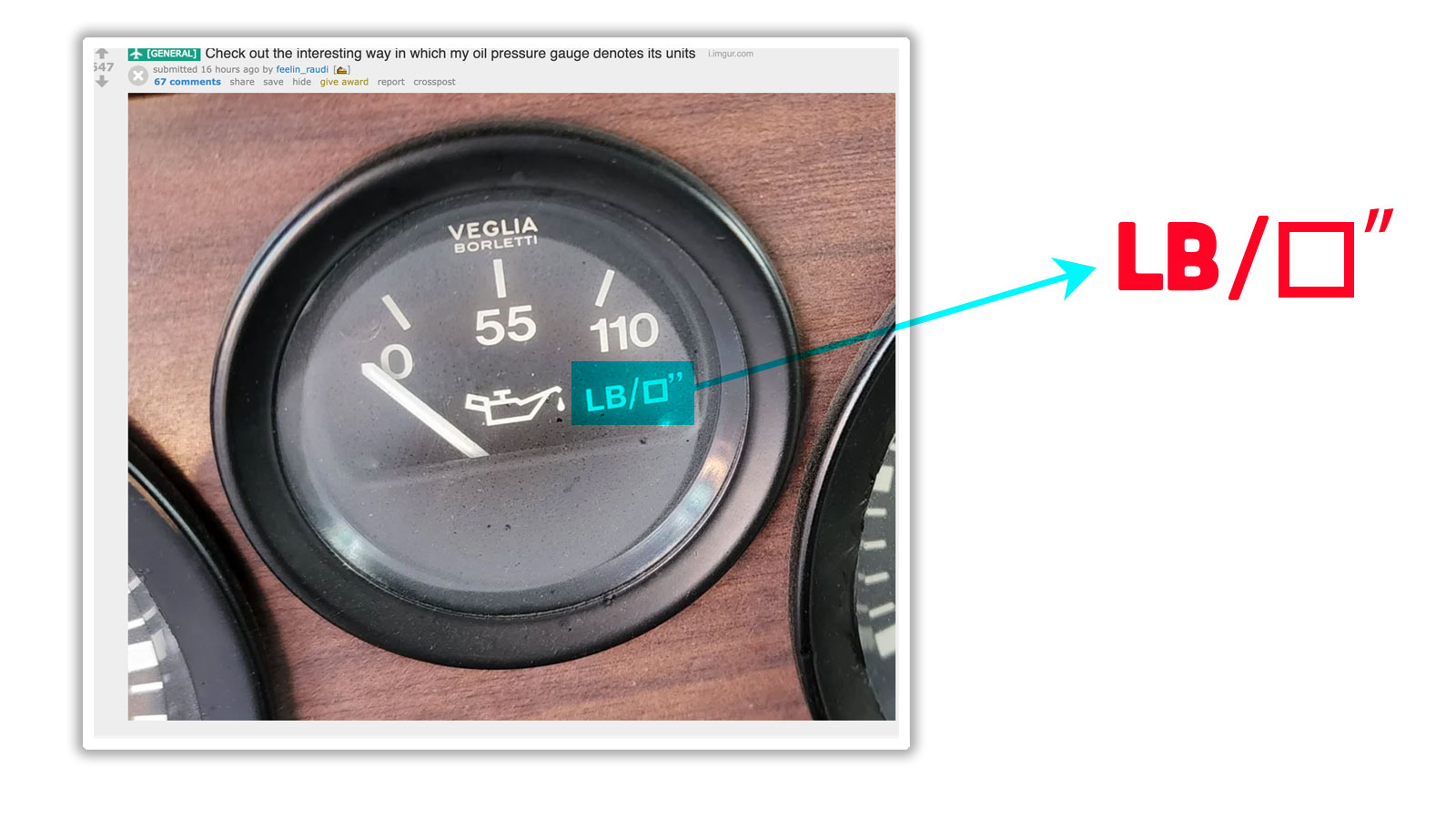 Do you see what’s going on there? Oil pressure is measured in terms of a unit of force per a given surface area. That’s because the oil in your engine is under pressure, which helps to force it through all those channels and the pressure helps the oil get between all of those spinning metal parts, forming a sort of fluid bearing so the metal bits can’t rub up against one another, in much the same way you or I are encouraged not to rub up against one another in, say, the checkout line at Target.

For most of our readers, the most common units used to measure oil pressure are pounds per square inch, commonly abbreviated as PSI. There are other ways to measure it, too, if square inches are just too Imperial for your Metric mind, like in Pascals (one newton of force per square meter) or as bar (which is 100 kilopascals).

But, let’s get back to our weird gauge here. It’s a gauge that measures in PSI, but instead of being labeled PSI like almost every other oil pressure gauge I can think of is, it’s instead labeled with this ridiculous rebus:

What, and I mean this earnestly, the fuck.

Is this just some weird Italian nonsense, since that gauge is a Veglia Borletti? I checked and, no, we can’t blame this on Italy, because it shows up in other company’s gauges, including Smiths and Jaeger, for example:

So, this seems to be A Thing, and looks like it’s shown up on a variety of cars over the years, from Alfas to Jags to Fiats to whatevers. I don’t understand why this would ever be considered preferable to PSI.

For one thing, it’s just harder to read. That ▢ reads like letter O or a zero, since plenty of typefaces square off letters like that. Then, the use of ” for inch is well enough known, but it’s a tiny symbol, and it can also mean seconds as in how you can break down degrees into minutes and seconds. I don’t know why you’d think this was talking about degrees on such a gauge, but I can easily see looking at it and reading “pounds per zero inches?”

Also, conceptually, it’s just feels wrong. It shows a literal square before the inches, like an object unto itself, when, really the “square” being implied is more of a mathematical square, a unit of area, one inch per side. And, yes, while that is a literal square shape, it just, I don’t know, doesn’t read like it should.

I think even using an exponent to denote square would be better, like

But even that isn’t great, if we’re honest. None of these are better than the simple PSI, which even takes up less room than lb/▢” anyway.

Does anyone prefer this? I suppose it has some aesthetic appeal, and if I had a car with this on a gauge you know I’d be all over it, showing it off to any poor bastard unfortunate enough to get within ten feet of me and my car.

You know what? Let’s a do a poll! I’m curious if there’s anyone out there who things the goofy letters-and-square-and-slashes-and-hashmarks bullshit is better than PSI, and if you do, I’d love to know why, so tell me in the comments after you vote!

I'm a co-founder of the Autopian, the site you're on RIGHT NOW! I'm here to talk to you about taillights until you cry and beg me to stop, which I absolutely will not. Sorry. Hug? Also, David's friend.
Read All My Posts »
PrevPreviousWatching A Burning RV Drive Itself Into Trees Is Alarming But There’s An Explanation That Doesn’t Involve Ghosts
NextCold Start: A Junkless TrunkNext