There Was A Lamborghini And A Yugo And A Freaking Airstream At The Autopian’s Meetup In A Walmart Parking Lot. Check It Out

We try to keep things classy here at The Autopian, which is why we hold every unsanctioned Detroit reader meetup in a parking lot shared by both a Walmart and a Dollar Tree. You might think these digs are a bit too fancy, and that this might dissuade some folks from attending. But actually, Friday’s meetup was so great we may have to start wearing tuxedos and upgrading these gatherings to the velvet-covered parking lots of Target. Seriously, check out the dazzling mix of cars from last week’s last-minute car-nerd hangout.

Detroit car culture is the greatest car culture on earth, and I say that as someone who has seen car culture all around the world. Rural Australia’s car culture might come close, and obviously I’m going to keep an open mind about LA’s car culture when I move there, but there really is no place like the Motor City (or, more accurately, the Motor Suburb). Proof is in the pudding. 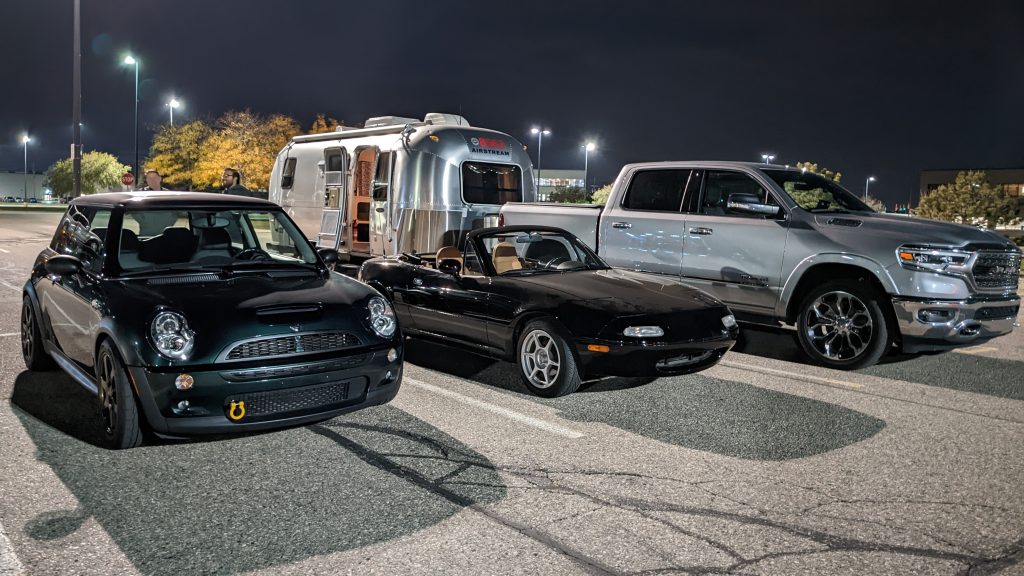 One gentleman who attended this show, which I announced only a day before, towed an Airstream — a freaking Airsteam — to a car show! And, I have to say, I learned that day that campers at car shows is such a clutch move, and something I want to make “a thing” from here on out, because towards the end of the evening, as wind started making standing outside by our cars a bit uncomfortable, we were able to retreat into the soft embrace of that lovely camper: 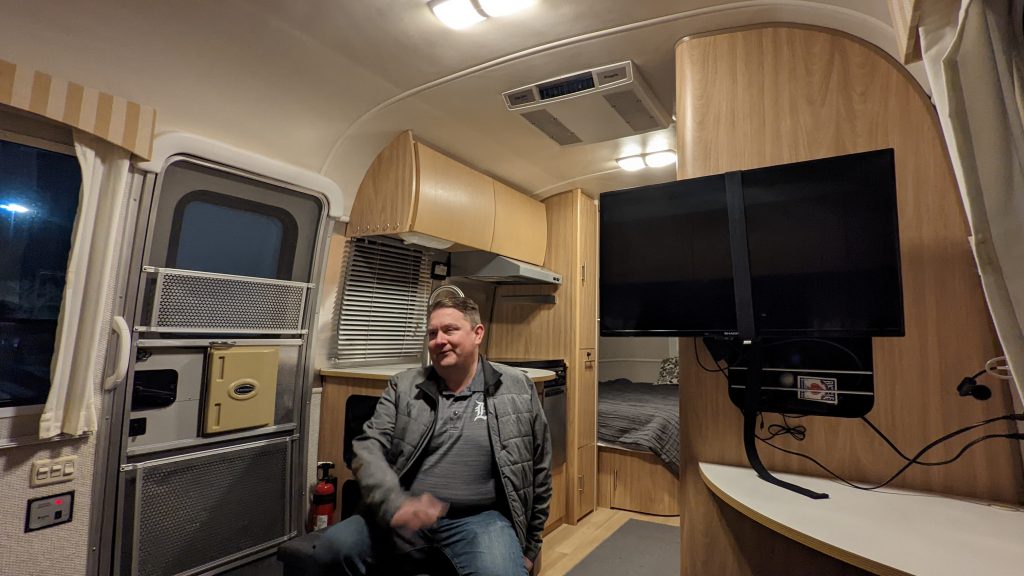 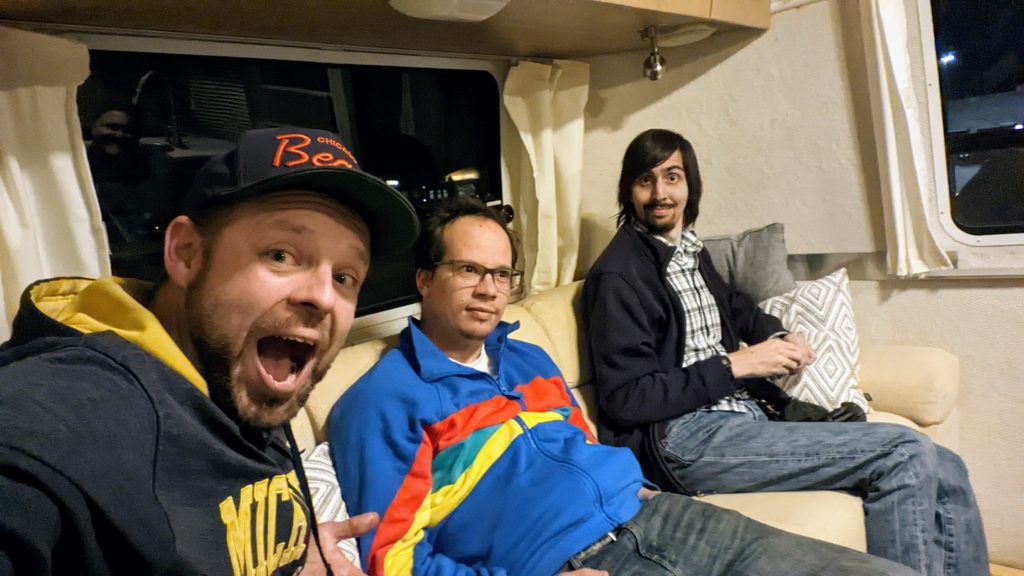 I also met my former Chrysler engineering colleague Jack, who owns the most beautiful, most tastefully modified FD Mazda RX-7 I’ve ever seen. 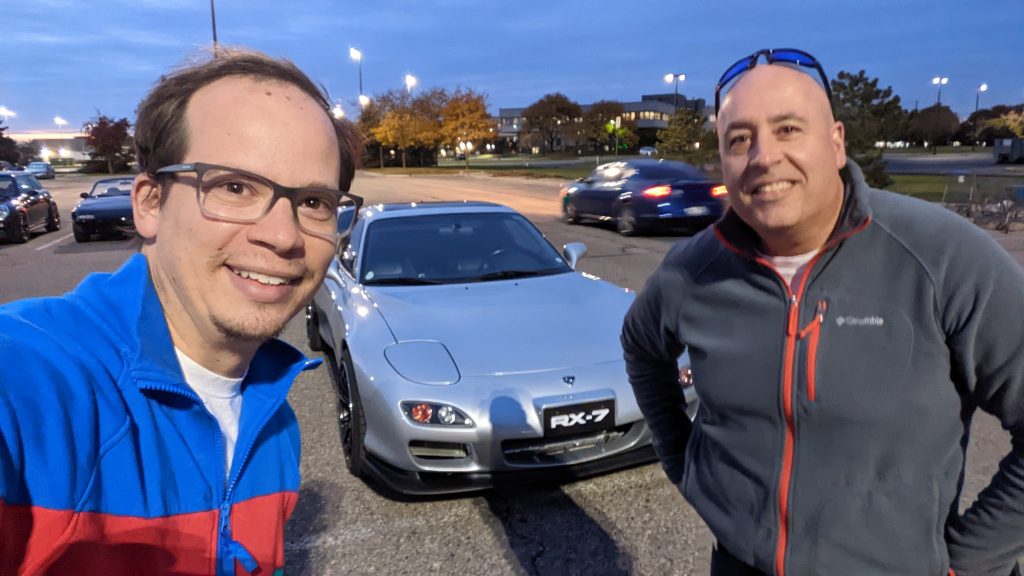 Speaking of Jack, there’s this high-schooler named Jack who normally shows up in his Miata, but this time came with his dad in a yellow Mach-E. Jack once came to me during one of these events with a shocked look on his face; “Hey, David, one of the pizzas…it…”

“Well, it was blown off your tailgate by the wind. It landed face-down.”

“Which one?” I responded. He walked me over to my truck, where we saw the pizza being rabidly consumed by Autopians. Our eyes grew large, we looked at each other.

“This secret stays between you and me” I told him. Jack, shown in the photo below, has kept his promise for many months, but now there’s no longer a promise to keep. I hereby release you of this burden, young Jack; there are no more secrets. You are free. (Also, sorry to anyone who ate a piece of asphalt that night). 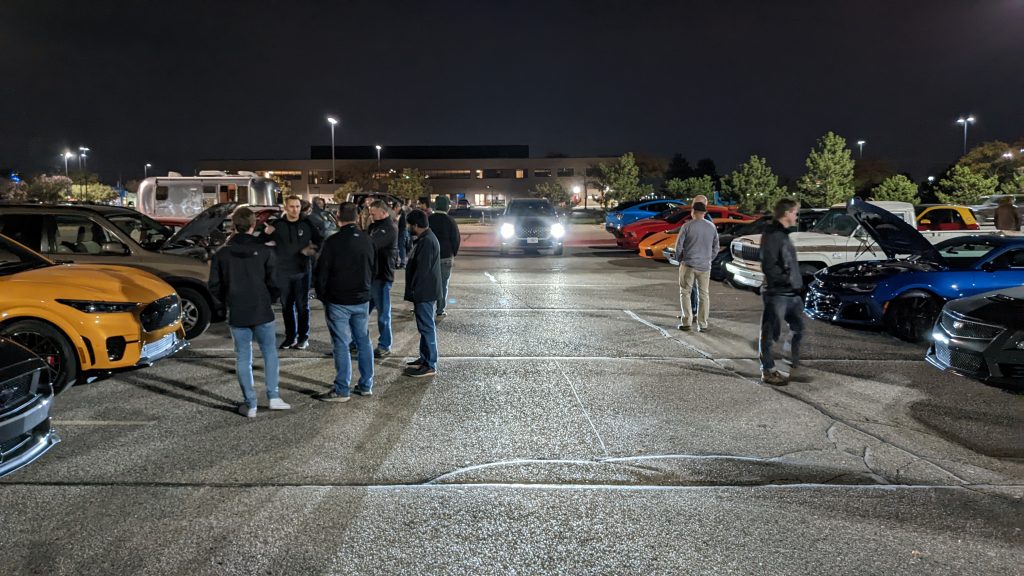 Anyway, that pizza story is just to say that Jack is awesome, and his Miata is great, even if it did blow its clutch slave cylinder on the way back from the last gathering.

Speaking of awesome, the owner of the most perfect Porsche 928 was REPRESENTING: 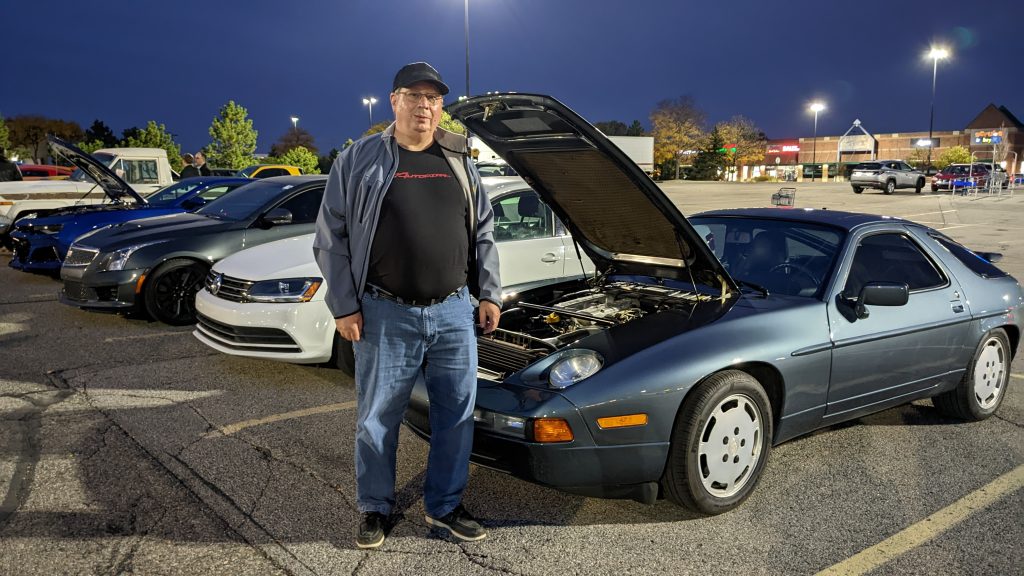 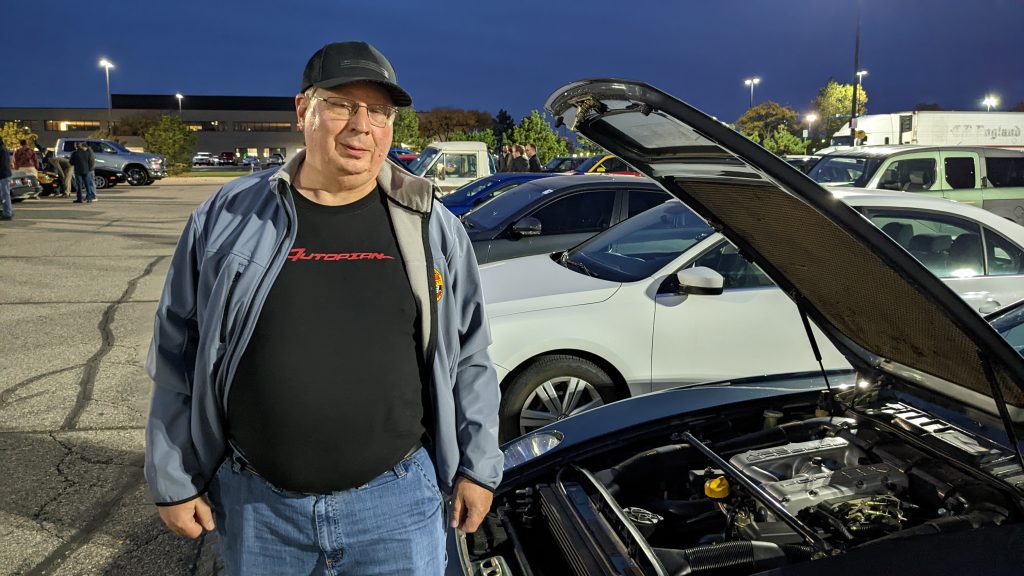 There was a Little Tikes Smart parked behind a Lamborghini Gallardo parked next to the best Triumph TR7 ever. 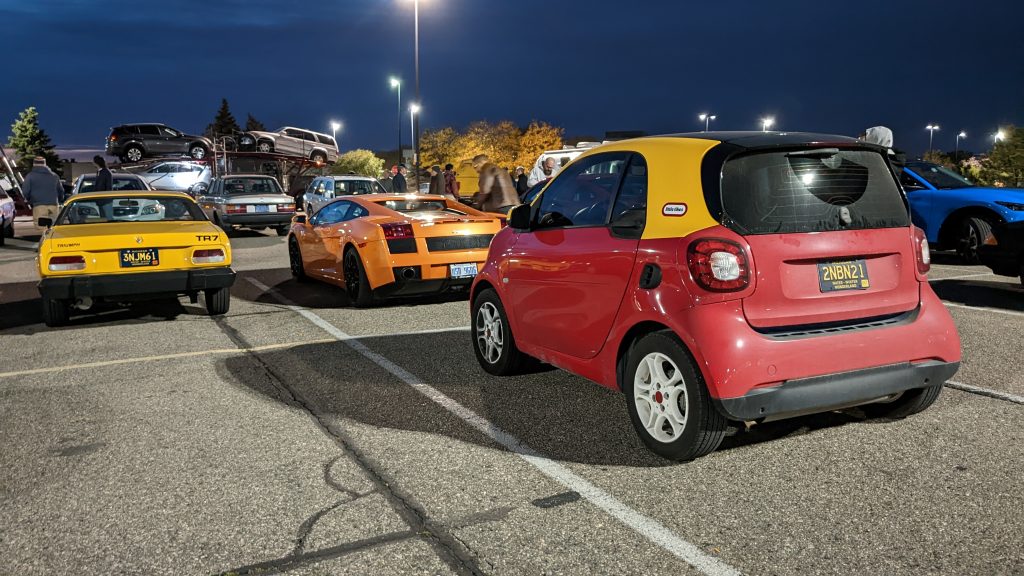 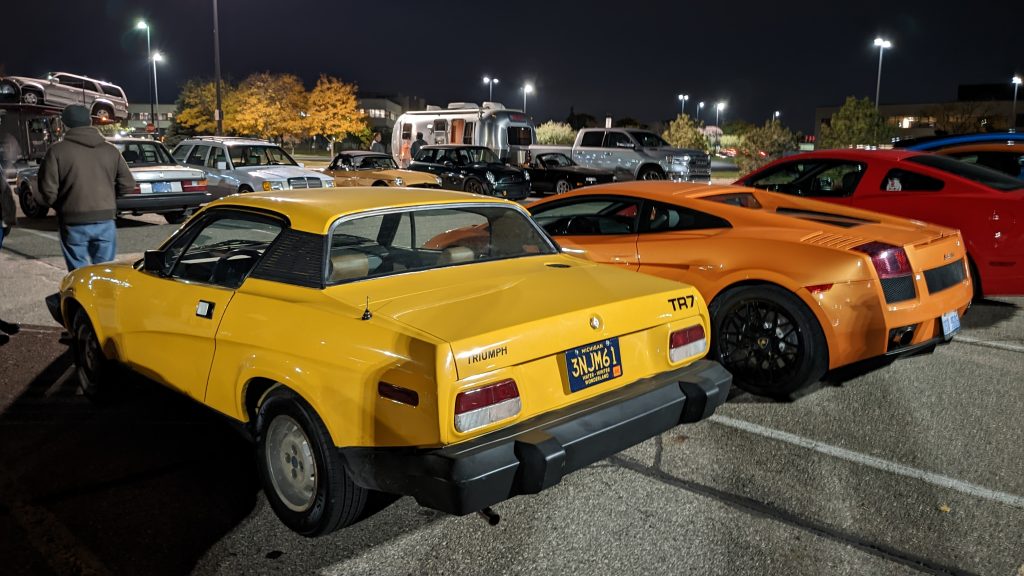 The TR7 owner, Joe, was blasting tunes over his Eight-Track player using an amazing aux-to-cassette adapter plugged into a cassette-to-8-track adapter. Check it out:

Ford was well-represented, not just car-wise, but engineer-wise. Lots of engineers show up to these Walmart gatherings; the Ti-89 count in that parking lot goes up fiftyfold when we have Autopian meetups. I think, with the combined power of the enginerds in that Walmart parking lot during those two or three hours, we could have designed and built at the very least a decent golf cart. Maybe even a forklift. 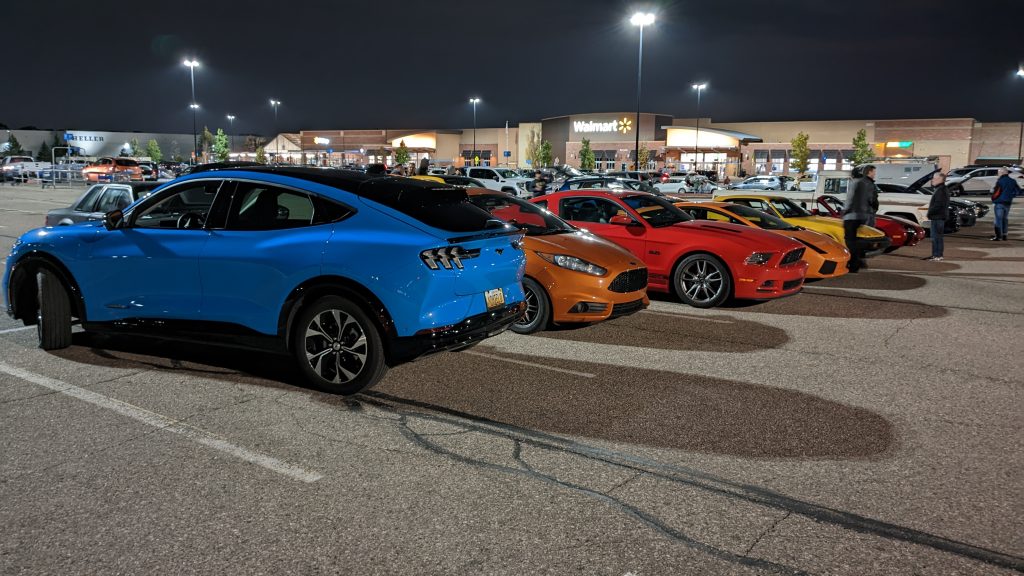 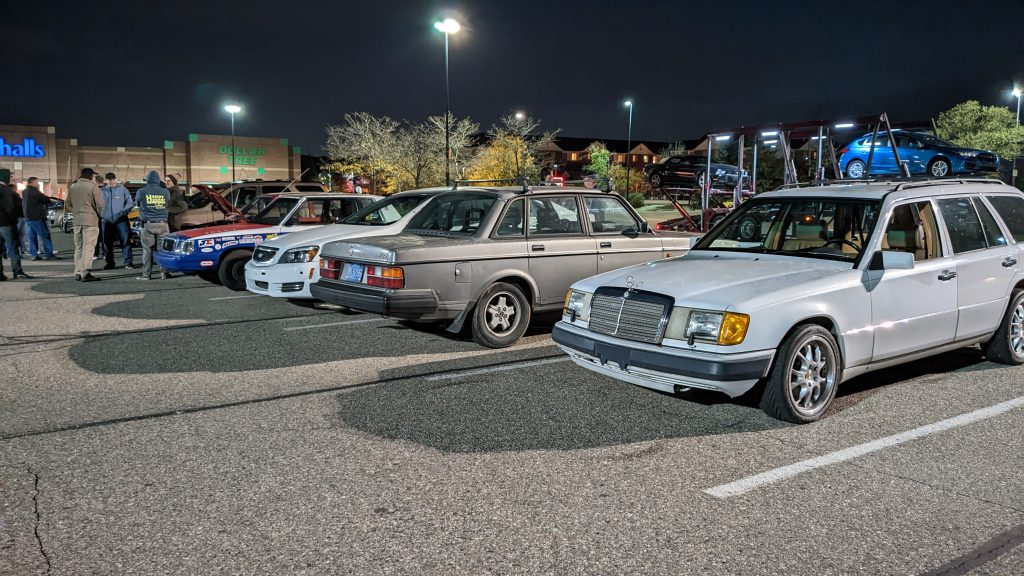 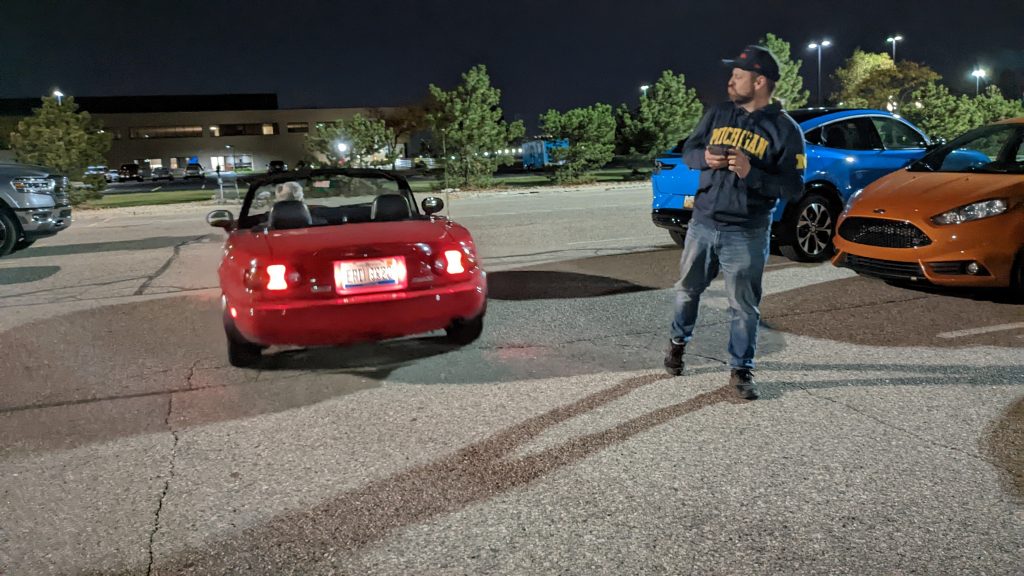 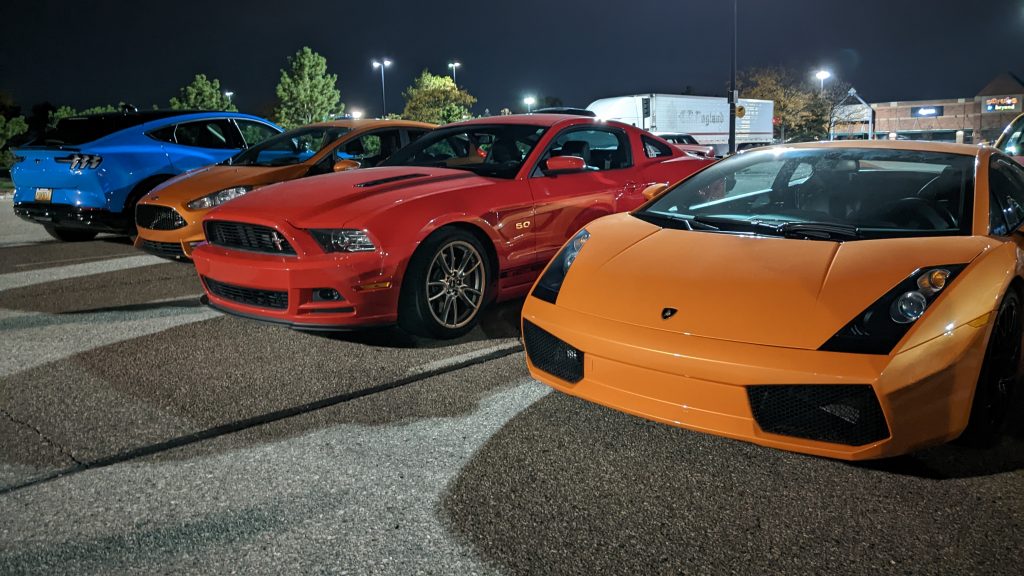 This Subaru next to a Polestar next to a lifted Pontiac Firebird Gambler 500 car is exactly what being an Autopian is all about: 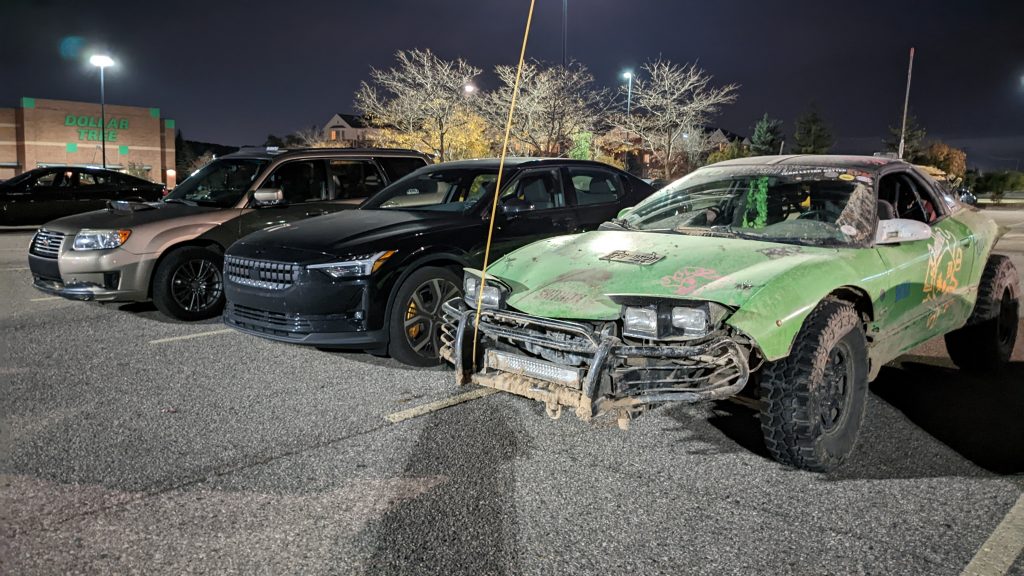 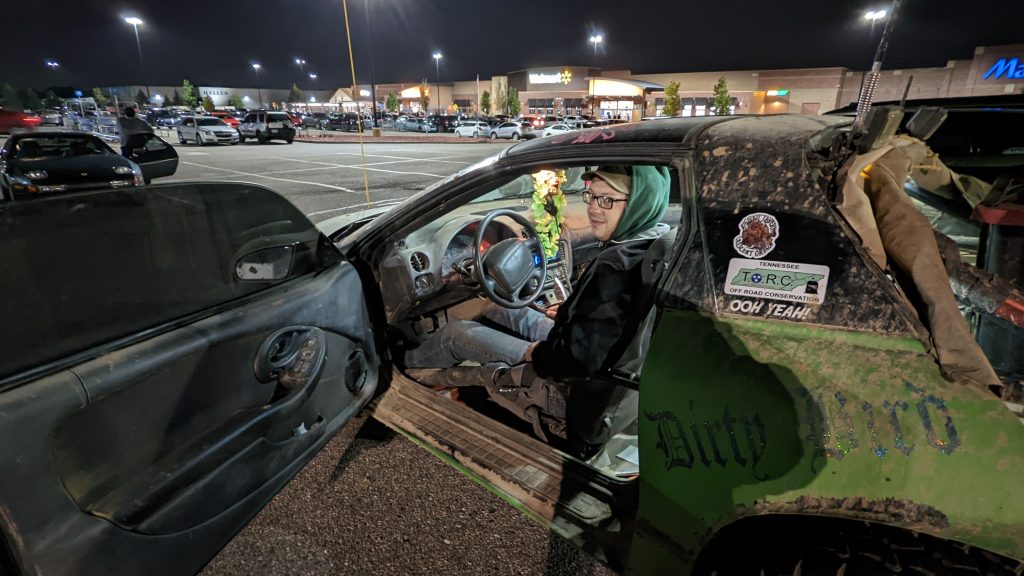 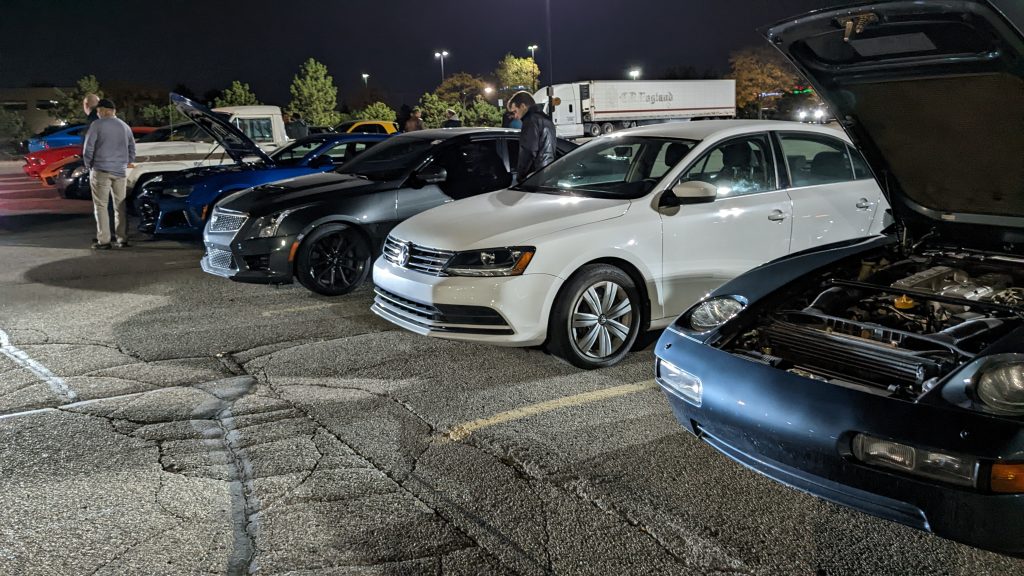 We should probably talk about this Yugo, because it is the most perfect Yugo on earth, I’m convinced. 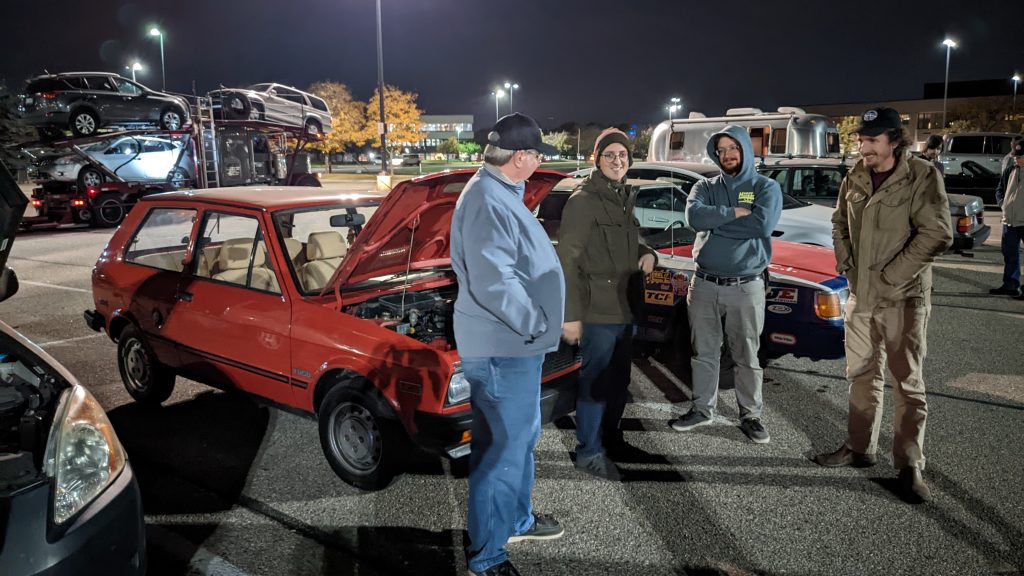 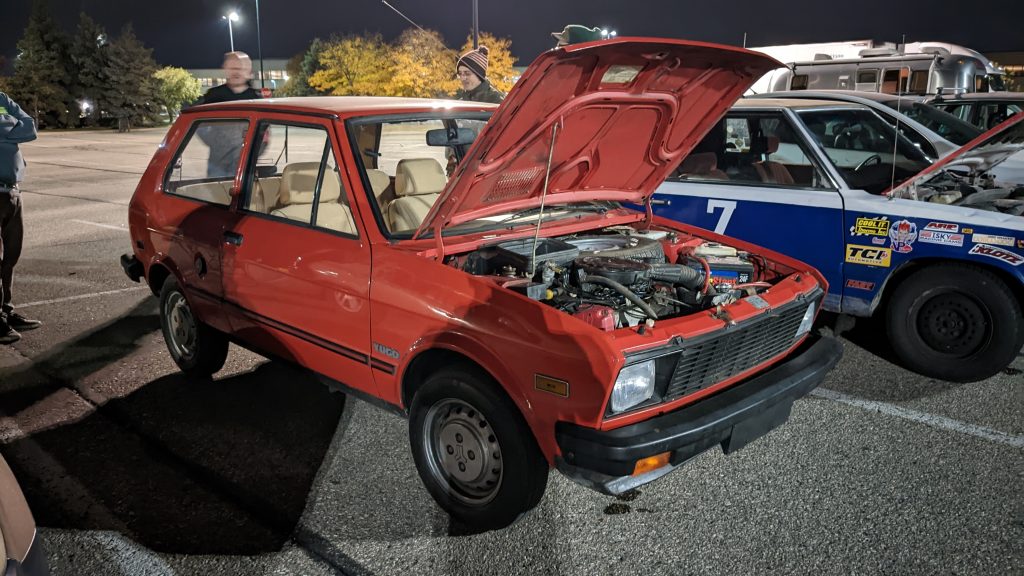 Look at this beautiful brown interior! It was in mint condition, and the vehicle itself had fewer than 100,000 miles on the odometer. Apparently its clutch had gone out in the 1980s, and, though it was later replaced, the car was hardly driven thereafter: 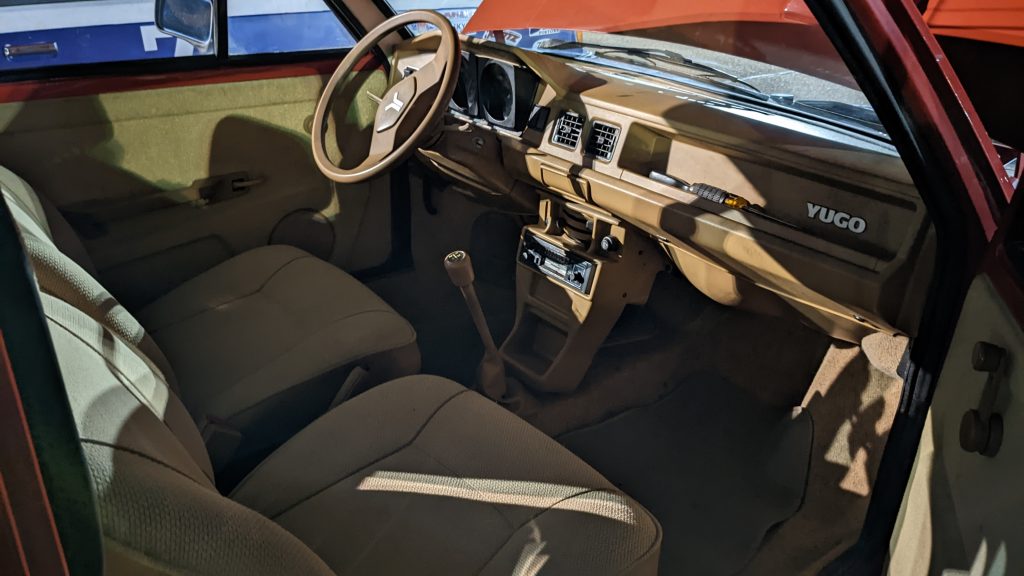 You know what, though? I have to say that, among the cars that I enjoyed seeing there most was this bone-stock Honda CR-V. It’s just an automatic, all-wheel drive CR-V, but it’s basically completely rust free, the paint is in great shape, and the owner, Dr. Buford, digs it (as he should!). 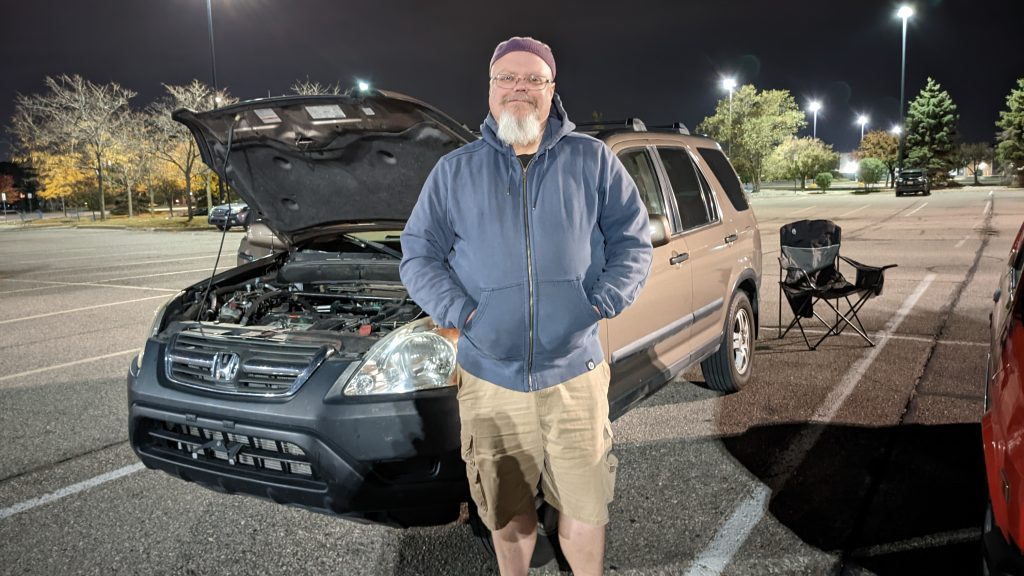 There’s also a Honda Element owner who regularly shows up to these meetups; he even reconditioned his plastic trim ahead of the last meetup just so the thing would look good. I love that.

Rust-loving Jeep man, cofounder and EIC of The Autopian, Jason's friend. Email: david@autopian.com
Read All My Posts »
PrevPreviousGet Your Bonkers On With The Renault 4EVER Trophy Concept
NextI Accidentally Turned My Car Interior Into A Toxic Mold Disaster. Here’s How It’s Going Months After I Cleaned ItNext