This Amazing Morris Minor Variant Was Immune To Fender Benders 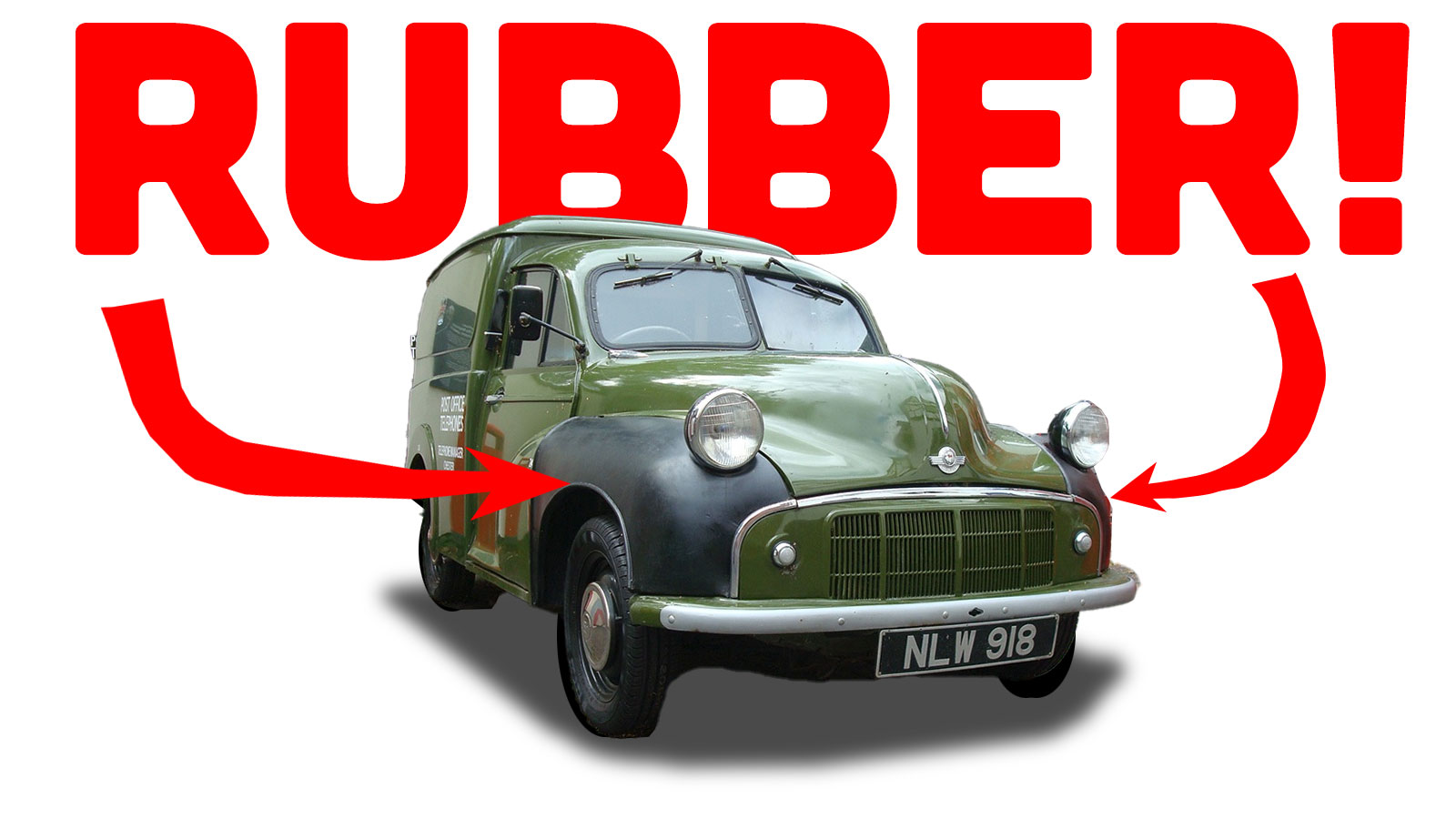 Sometimes I’ll learn an automotive fact I wasn’t aware of before and realize that if I don’t tell someone about it, I might explode, messily and causing a lot of hassle for everyone. So, with that in mind, I’m going to lean on you, charming readers, because no humans in my house give a shit anymore and the dog and cats I’m starting to suspect are only humoring me about this stuff in the hopes that I’ll magically drop a sack of meatballs, or something. The fact is one revealed to me by a commenter named Vie on today’s Cold Start post: The British General Post Office – which had been running British mail and telephone service from 1660 to 1969 (well, I suspect the telephone service was more active near the end bits of that timeline) had special Morris Minor-based vans that used rubber front fenders. For some reason, this fact has captivated me. 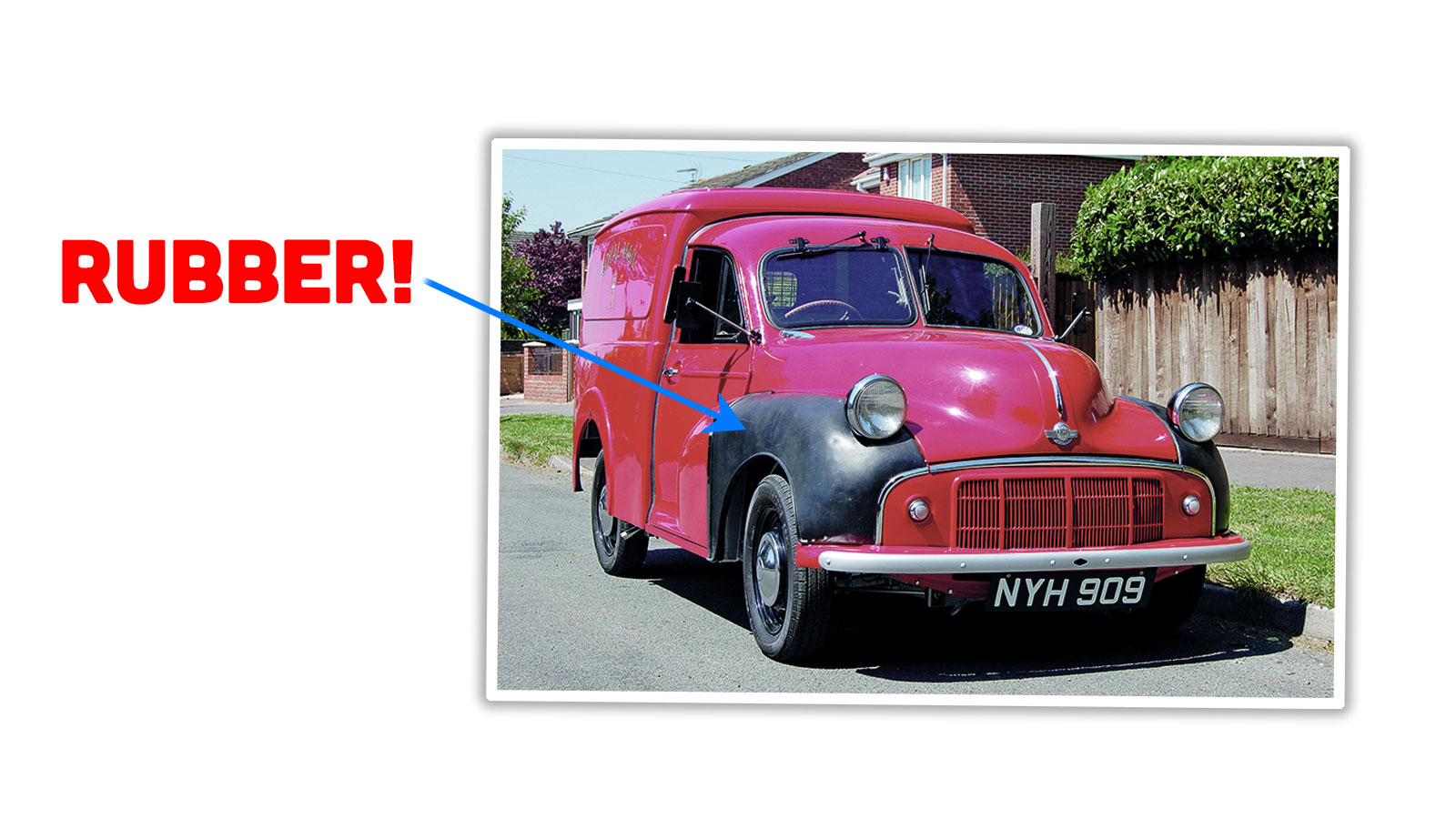 See those odd, matte-finish black fenders? They’re rubber! I can’t think of any other car that used actual, deformable rubber as major body panels like this. Sure, there’s been plenty of plastics and rubber-coated materials, and rubber bumpers that may even form parts of fenders, but as far as a whole metal body panel being replaced with a rubber one, I think these GPO vehicles are the lone example. I could be wrong, and will be delighted to be shown so in the comments, but this is definitely an exclusive club.

The rubber-fender’d vans were Series II Morris Minors, as they had their headlights moved from out of the grille area like the first-generation ones, but differed from other Series II Minors design-wise because the headlights were not faired into the fenders, instead being separate, dune-buggy-style units that just perched atop their rubber fenders. This is likely because the rubber’s ability to deform would have likely popped out headlights that were inset into the fenders, something that could have made children cry, seeing a friendly GPO van with a headlamp-eye dangling by its optic nerves/wires. 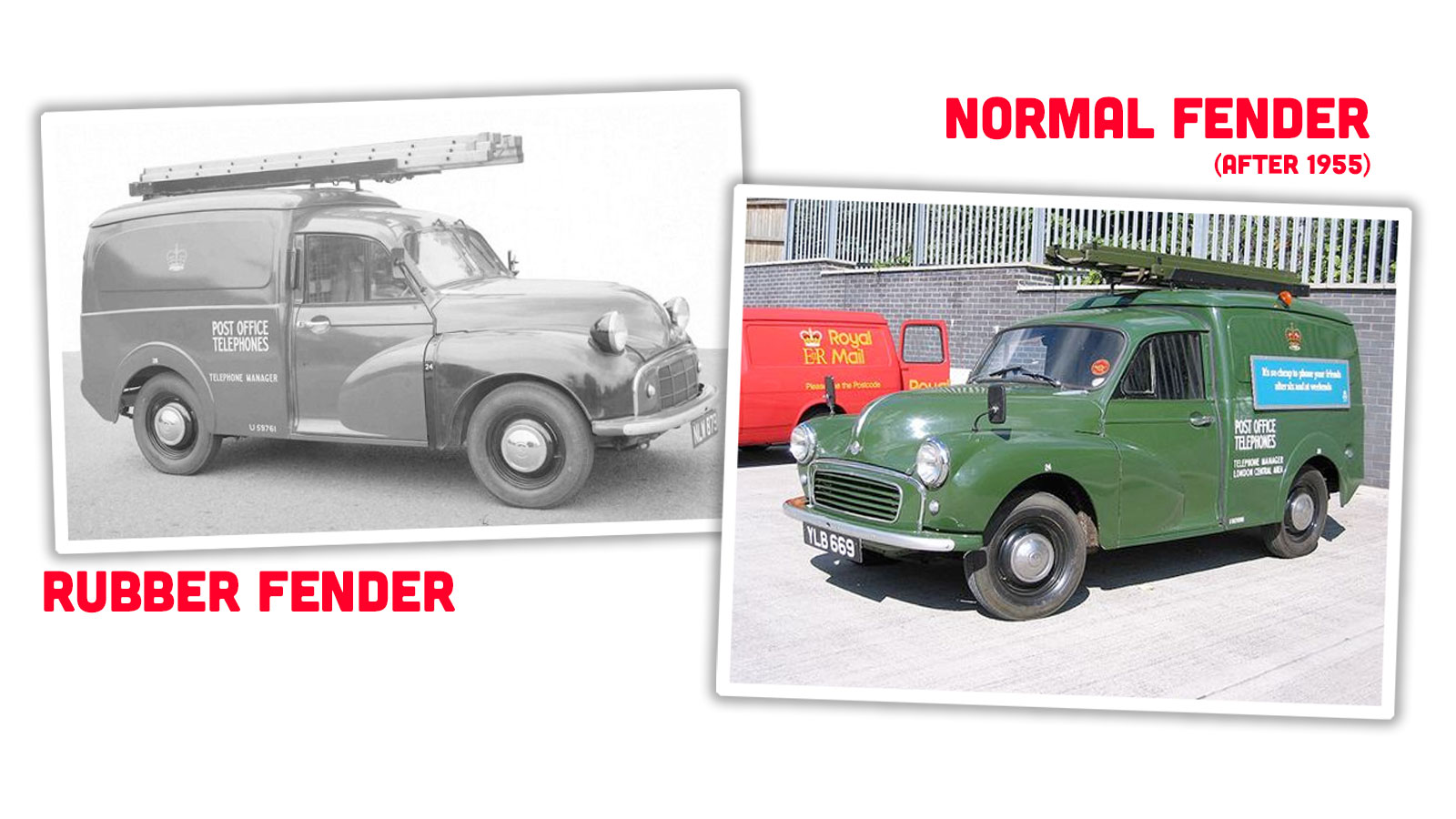 These rubber fender vans were never made in huge numbers, and were gone, replaced by conventionally-bodied Morris Minor vans by 1955:

Rubber wings were fitted to the early GPO vans complete with headlights perched on top. This feature ceased during 1955 along with the primitive plywood facia dashboards that were fitted to these early pioneers. An observation on the rubber wings was that they all seemed to have the same dent in the nearside wing, always in the same place. An explanation that has been put forward suggests that the rubber wings were stored together prior to fitting, either at the factory or replacements at the GPO depots, the nearside bent inwards and the offside outwards, thus causing the indentation in exactly the same place!

I think this is the dent that was mentioned: 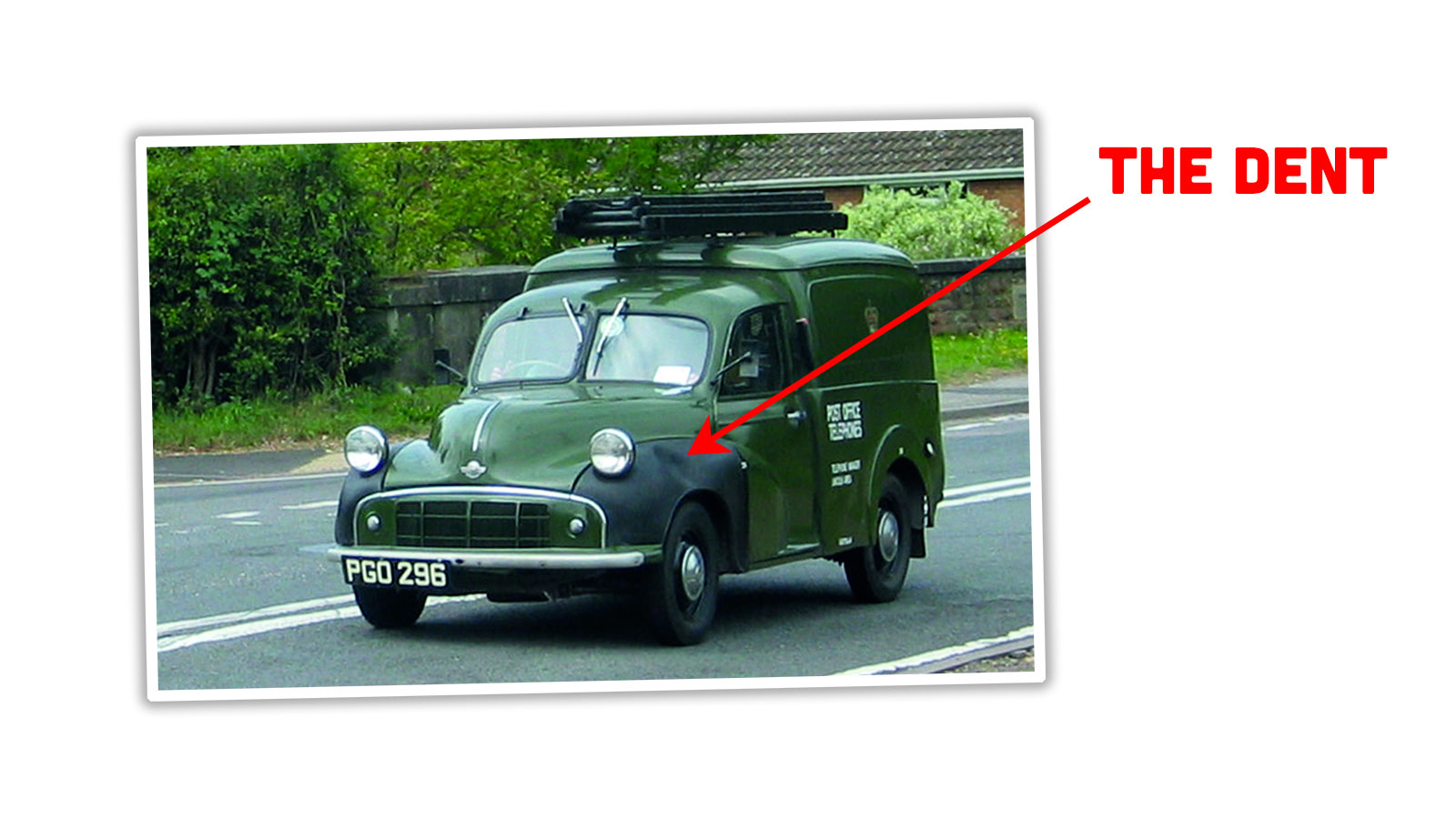 For rubber fenders that would seem to be immune from dents, it’s especially ironic that they seemed to all come with a starter dent pre-supplied from the factory! I guess so just in case there were any true dent-lovers, they wouldn’t feel left out by the dent-proof fenders.

As for why the GPO wanted rubber-fendered vans, some sources seem to suggest they were a part of a greater philosophy that emphasized safety and caution, based on other modifications the vans had:

The GPO/PO were also more cautious about health and safety, even in those days and insisted all vans carried first aid boxes and fire extinguishers. Rubber buffers were also fitted to the bonnet corners to avoid injuries and the wheels were held in place by double-sided nuts to ensure that they were never fitted incorrectly. They never used the dome glass lights, as they continued to use the flat type lens. The chassis was painted silver as any failure or cracks could easily be identified. Many other items can be added to the list, metal triangular inserts were screwed into the openings at the bottom of the rear doors, tax disc holders were attached to the dash as well as the fitting of mudflaps to the front and rear.

I’m so taken by the rubber fender concept because I have a vivid memory from when I was 16, and had just bashed one of the fenders of my ’71 VW Super Beetle on the way to my after-school job selling and installing Apple //e computers. I remember sitting at a table and drawing ideas for rubber fenders I could possibly have made and replaced my vulnerable painted metal ones with, but my co-workers thought I was an idiot. Well, continued to think. 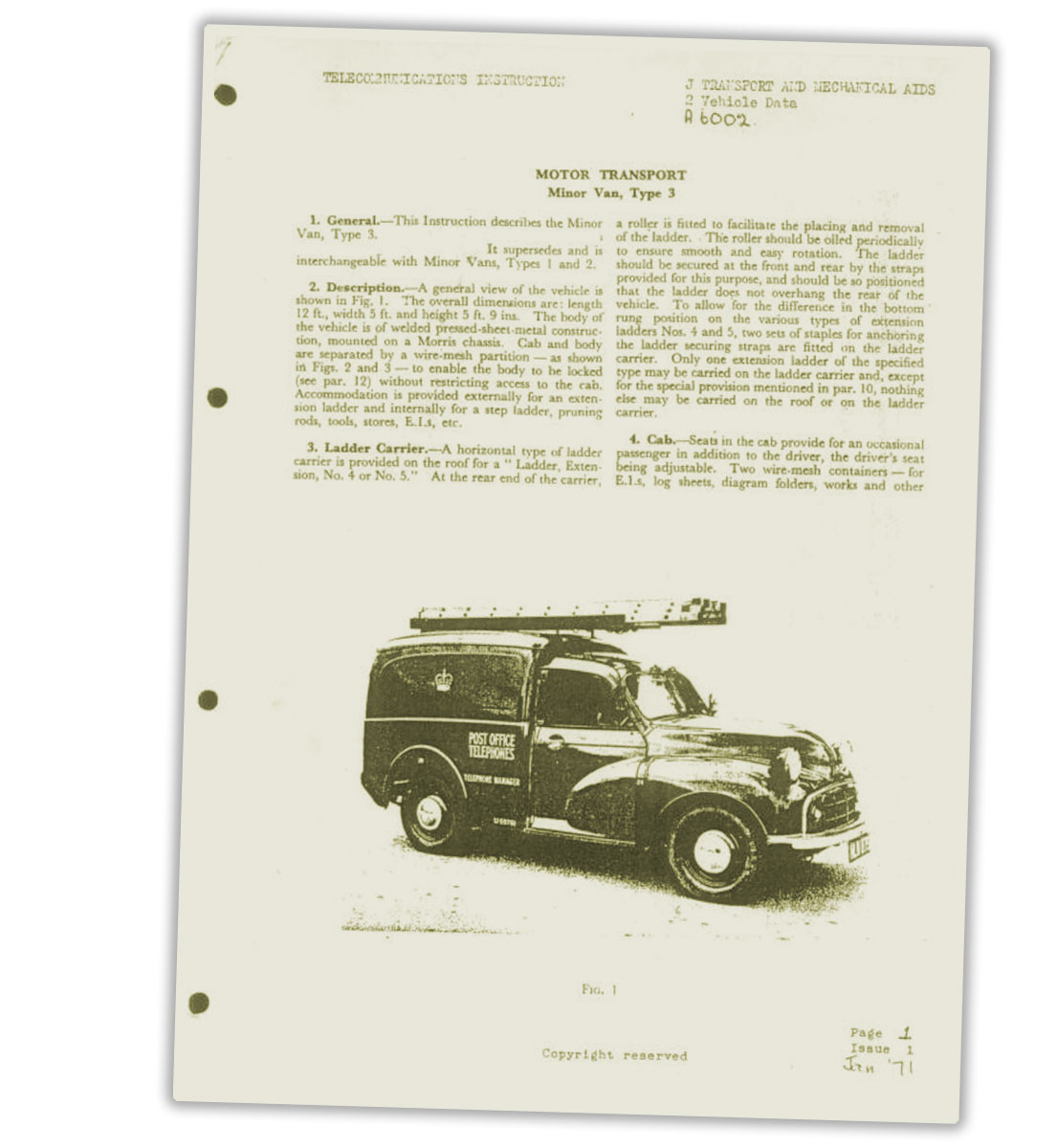 If only I knew then that decades ago the British Post Office had the same idea! That would have showed them, all of them!

I imagine that rubber fenders were a lot more forgiving of parking scrapes and made fender benders quite literal but with almost zero consequences, and should a distracted phone technician bump into you while trying to park, a rubber fender would likely cause a lot less damage than a metal one, whether you were driving or being a pedestrian. That all fits with what appears to be the GPO’s very safety-oriented modus operandi, with little rubber protectors on bonnet corners and probably those plastic things inserted into electrical outlets, if they had any. Were they hiring toddlers as phone technicians?

I'm a co-founder of the Autopian, the site you're on RIGHT NOW! I'm here to talk to you about taillights until you cry and beg me to stop, which I absolutely will not. Sorry. Hug? Also, David's friend.
Read All My Posts »
PrevPreviousWhile New Car Supply Stays Tight, Used Car Wholesale Values Continue To Cool
NextSmart Once Attempted To Boost Sales In America By Trying To Rebadge Nissan MicrasNext