This Cute Groundhog Chewed Up My Car’s Wiring, Took A Dump On Its Engine, And Tried Setting It On Fire

For an animal with an entire day named after it, the groundhog is surprisingly loathed, and by seemingly the entire human population. People set traps to capture or kill the rodents, some folks send their dogs after the woodchucks, and I’ve even heard of homeowners shoving garden hoses into burrows to drown or flush groundhogs out. It’s pretty messed up, and this is coming from someone who just had the crap scared out of him by a groundhog living in his engine bay — a groundhog that has wreaked havoc on the car’s wiring, taken a dump on its engine, and even set a trap of its own — one that could have set my car on fire. Let me explain.

I recently returned from an utterly absurd trip to Australia (which I’ll be writing about soon), only to find that my cars have been broken into by this little bugger:

Don’t let that cute face fool you; this groundhog is a menace.

We first met a few days ago when I went to pop the hood of my $700 Chevy Tracker. Something was amiss with my windshield wipers and one of my parking lights. Having checked the fuses in the driver’s side footwell, I figured I’d see if something was wrong underhood. Maybe the light bulb went bad and the wiper motor became disconnected or shorted somehow? I pulled the hood release at the base of the dash, walked around front, slid my hand in the crack above the radiator, and pulled the release.

“Ahhhh!” I yelled in surprise as I spotted a full-grown groundhog right in front of my face as soon as I cracked the hood. Nestled between my exhaust manifold and fender, the little rodent quickly scurried down the space between the vehicle’s 2.0-liter “J20” engine block and frame. The animal trotted away, right into the engine bay of my brother’s 1966 Ford Mustang. Here’s the groundhog sitting behind a Holly 2300 carburetor, hiding its head under the air cleaner: 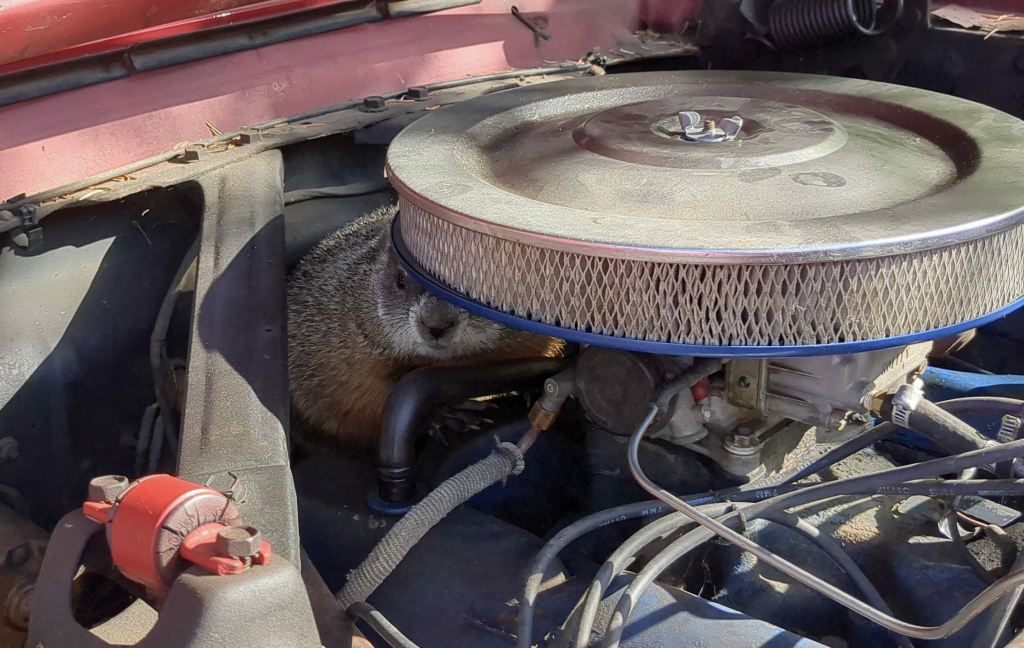 What is it with groundhogs and engine bays? These cars had been sitting for over a month; those engines offered no warmth. I assume it has to do with the rain cover provided by the hood, and just the general coziness and quietness. Or maybe groundhogs are prolific wrenchers who love tuning carburetors and setting ignition timing, perhaps as a way to attract mates?

Either way, no matter how this little fur-ball justified its presence next to that 289 cubic-inch V8, I wasn’t thrilled about the situation. I’m generally not one to make blanket statements about entire groups, but it’s well established that groundhogs make the worst tenants. They don’t pay rent; they trash the place; and honestly, they’re really not all that polite, running away anytime I come over to say hello. 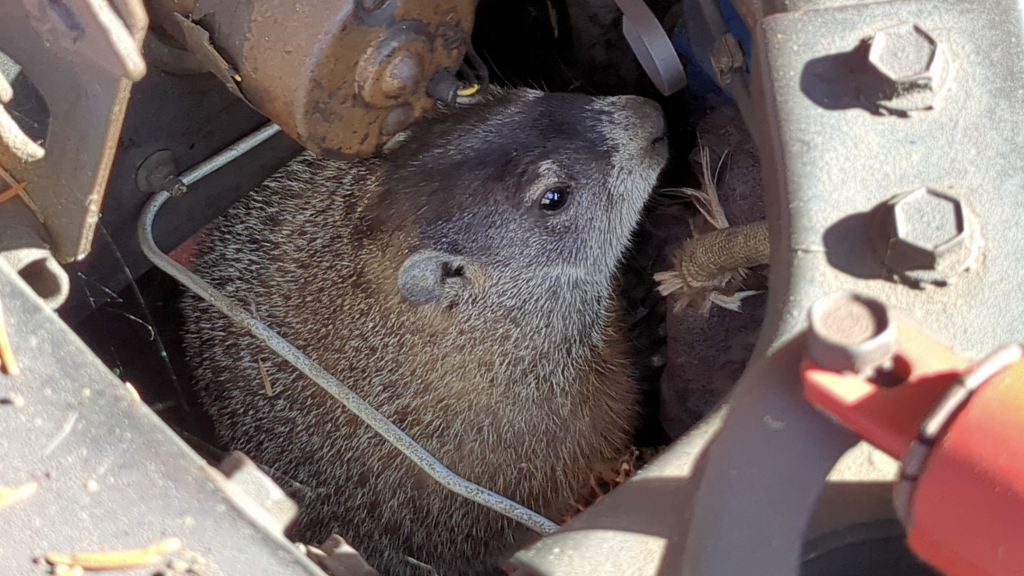 The Groundhog Did A Number On My Poor Chevy Tracker 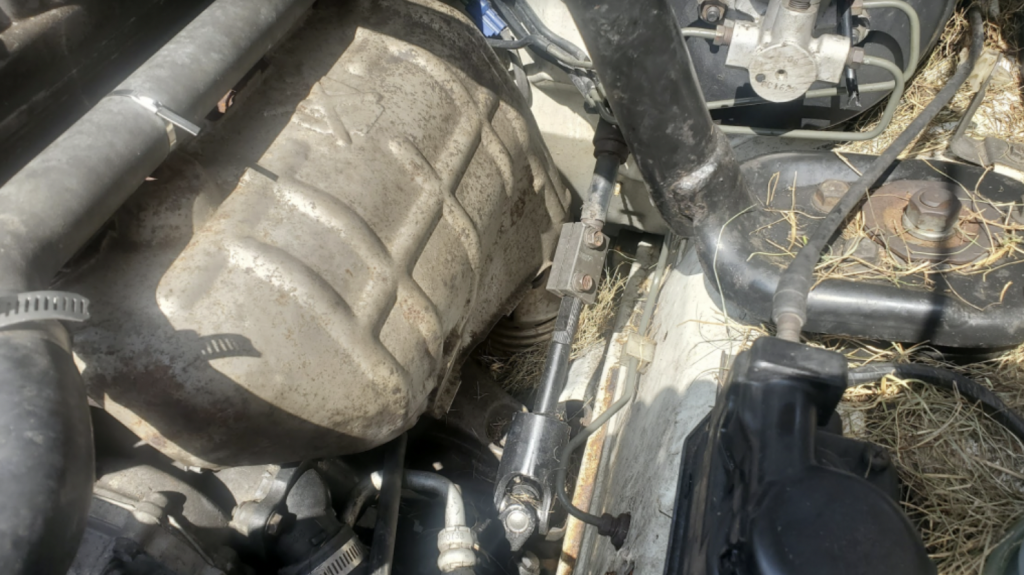 The single hottest part of a car that isn’t part of the engine is the catalytic converter. Temperatures there can crest 1,000 Fahrenheit, which is why you always see “cats” with big heat shields all the way around them. Catalytic converters are known to cause brush fires, not just when they start breaking apart and shooting hot bits from the tailpipe, but also when someone drives in high grass. It’s because I knew about the dangers of catalytic converters that I found this so alarming: 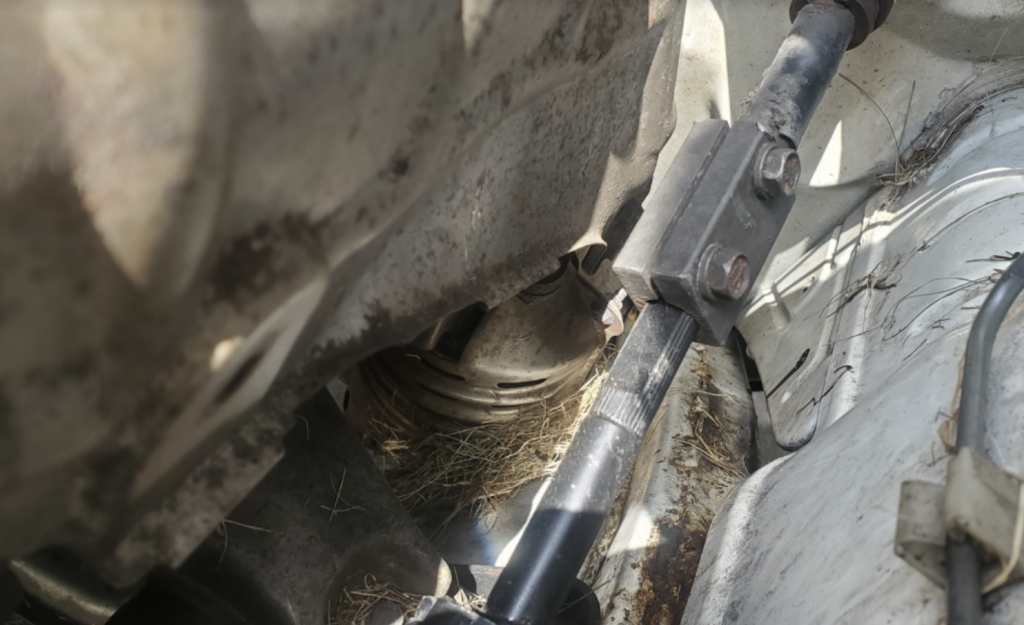 That’s a bunch of dry grass all bunched up, pressed against my catalytic convert, just waiting to go up in flames. This happened a few months ago; thank goodness my brother had noticed it before I drove away! Some rodent — presumably that groundhog — had made a nest atop my driver’s side fender, and some of that nest had fallen between my catalytic converter and the SUV’s frame. 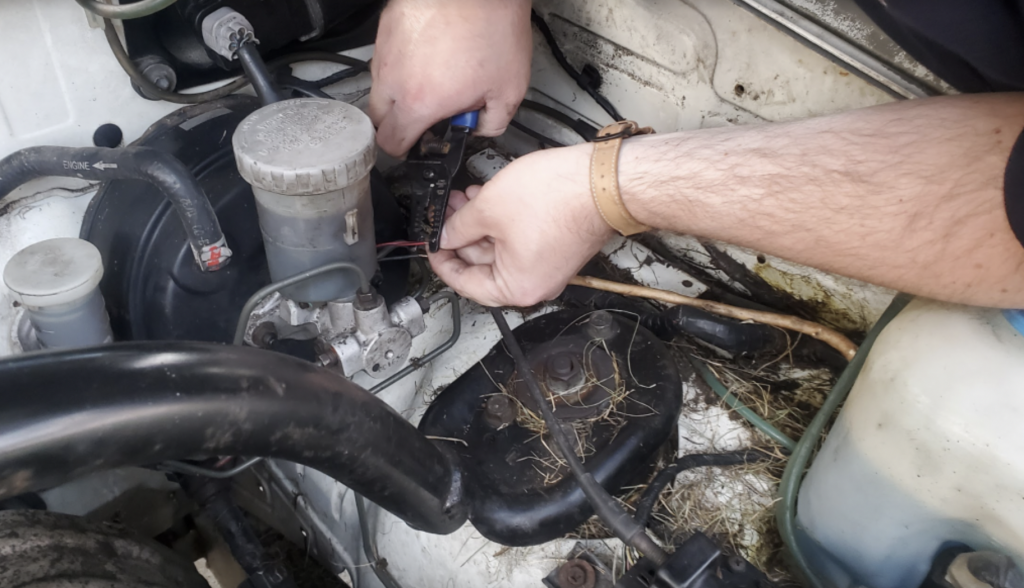 My brother also noticed some chewed wires going to my brake master cylinder; the wires wire led to a switch, whose job it is to turn on a dash light if there’s an issue with my brake system (i.e. a leak that could compromise brake performance). Tommy fixed those wires with a crimping tool and some heat shrink, only to then find this: 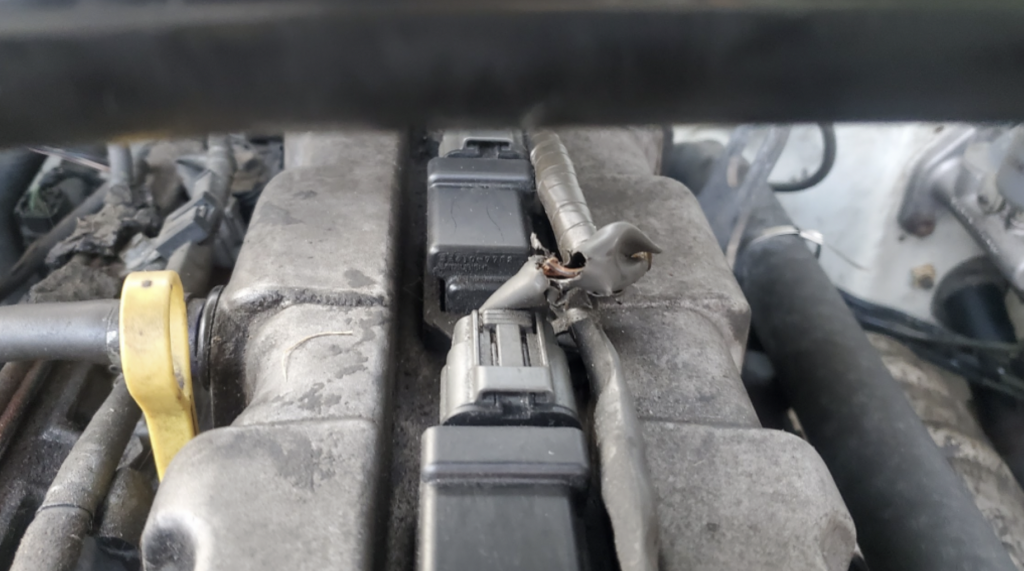 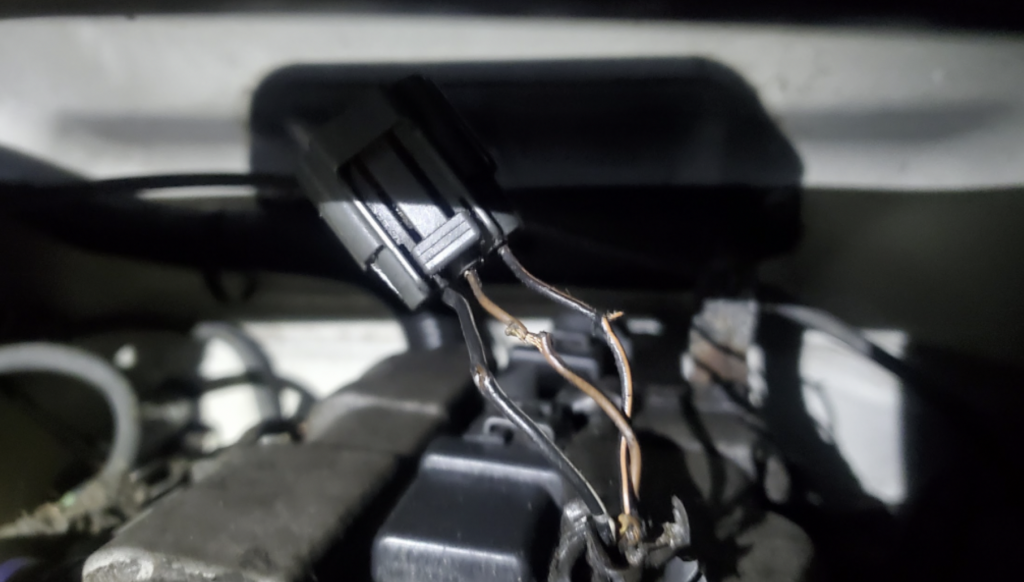 Those are the wires leading to the cylinder #2 ignition coil. The insulation has been chewed through, and though the wires themselves aren’t too bad, a short between them would have caused the little Suzuki to have run like absolute crap.

Speaking of crap, in addition to piling kindling against to the hottest part of my exhaust system to act as a fire-trap, and in addition to chewing up my wiring, the groundhog figured it’d leave me this lovely gift between the valve cover and intake manifold: 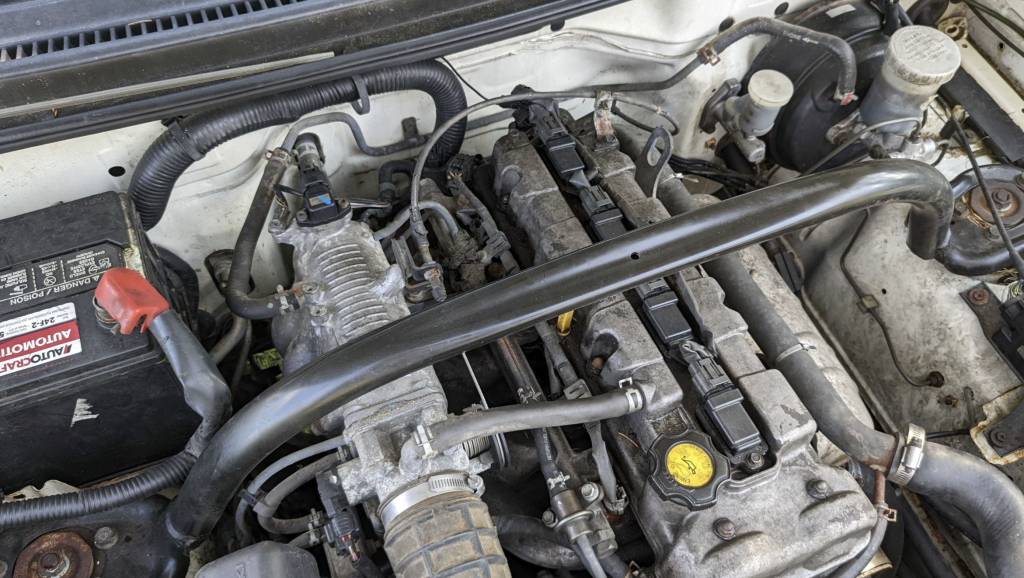 That’s a steaming pile of rodent Scheisse right on top of my fuel rail. Here’s a closer look; it almost looks like the animal was trying to patch a leak. (And if that was its intention, then I thank it. But I doubt it): 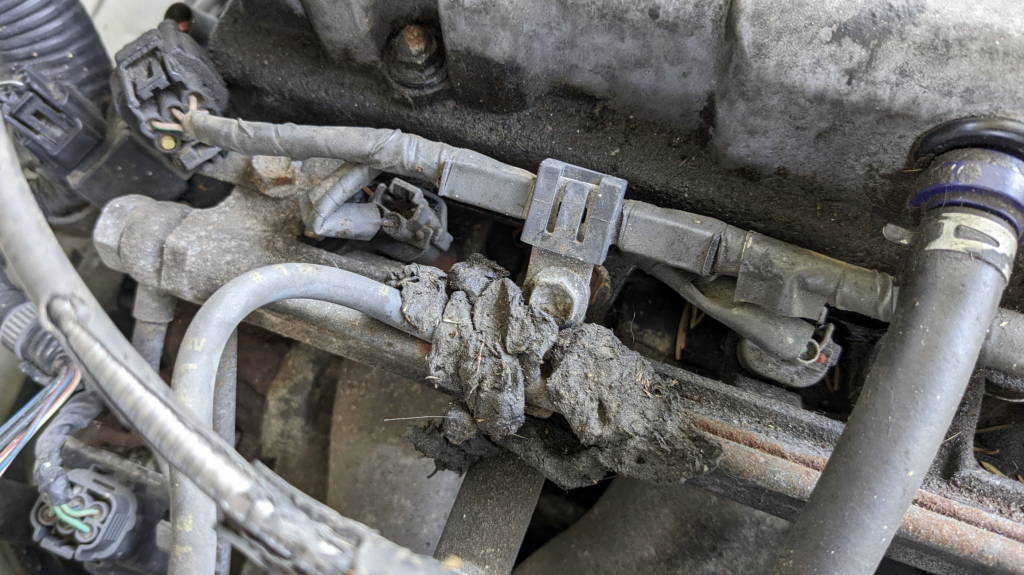 You’ll notice that, just above that excrement (likely within range of its steam-clouds) is my throttle cable, whose insulation has been chewed off. Look farther along that throttle cable, and things don’t get a whole lot better. 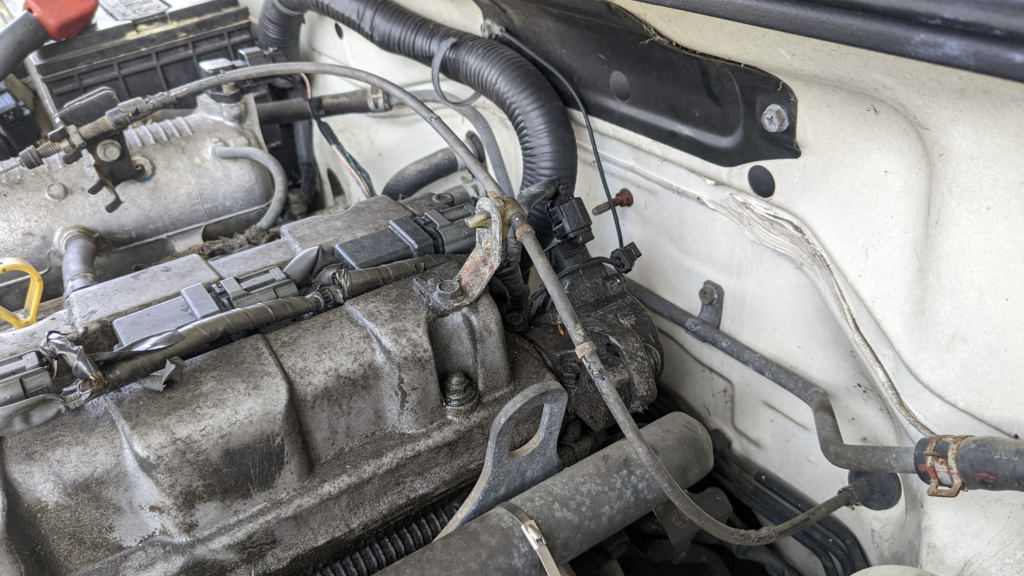 This groundhog loves whatever material it is that covers that throttle cable sheath: 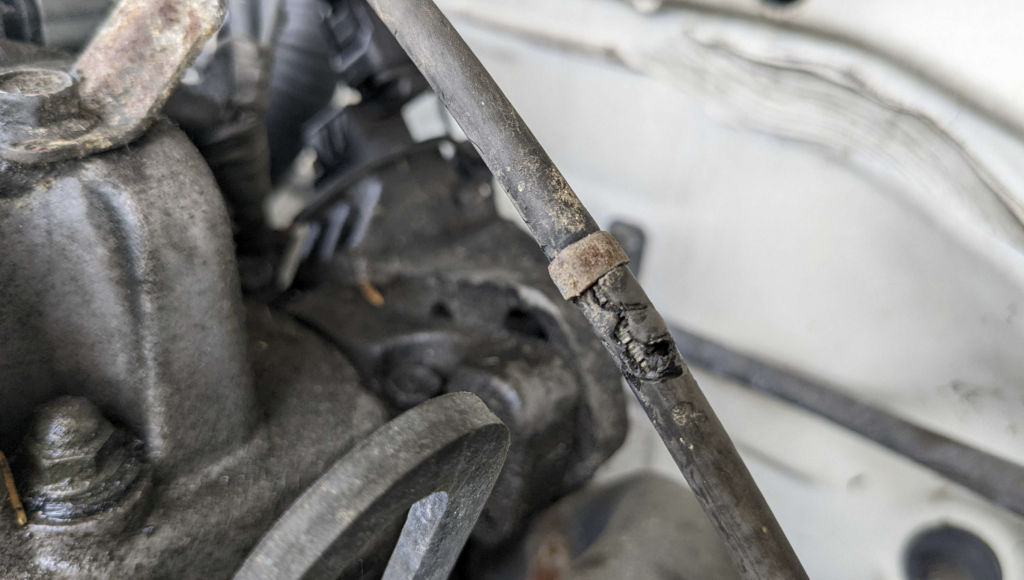 It also took out a huge length of my windshield washer hose: 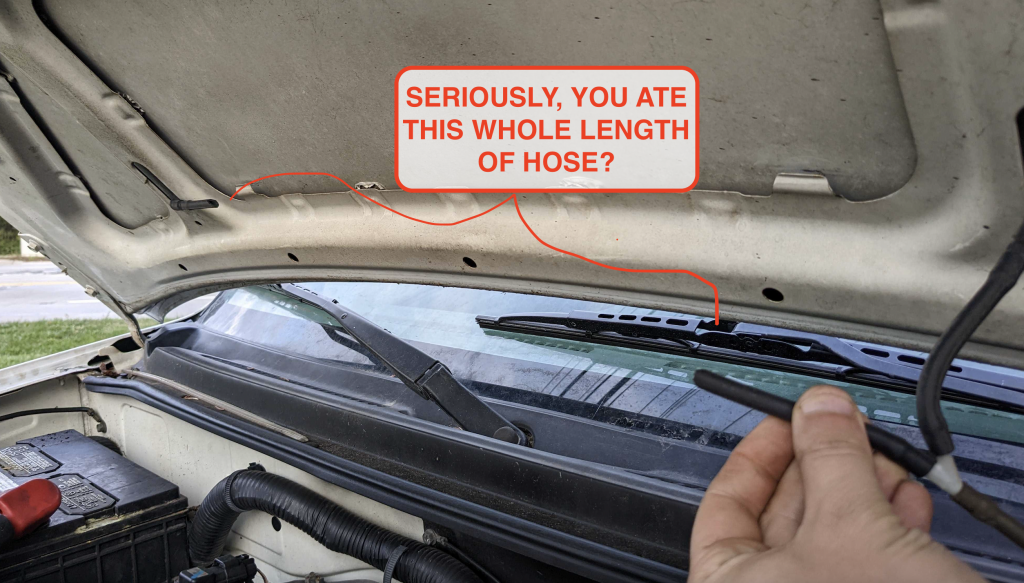 No part of me wants to hurt this beautiful creature, but surely we can all agree that it deserves some level of punishment. You don’t try to set my car on fire, chew through my wiring to the point that my wipers, washers, and front parking light no longer work, gnaw through my throttle cable sheath cover, and then top it all off with a Dairy-Queen-Ice-Cream shaped dump. You just don’t do these things! 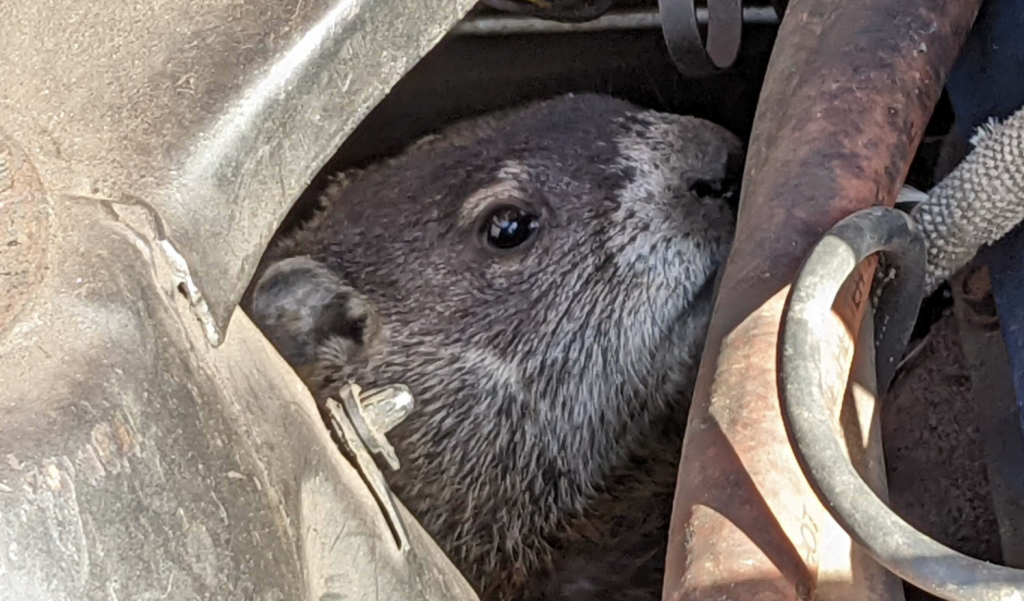 But I think it knows it’s in trouble. Just look at that guilty face.

Rust-loving Jeep man, cofounder and EIC of The Autopian, Jason's friend. Email: david@autopian.com
Read All My Posts »
PrevPreviousThe Jaguar F-Type 75 And R 75 Special Editions Remind Me Why I’m Going To Miss The Absolute Hell Out Of The F-Type
NextNew IIHS Study Confirms What We Suspected About Tesla’s Autopilot And Other Level 2 Driver Assist Systems: People Are Dangerously ConfusedNext