“Somewhere in this garage is the megalodon of spiders,” I kept thinking as I worked on the $900 Chrysler Valiant ute I’d purchased sight unseen in Australia. I’d gotten a quick glimpse of the gargantuan arachnid a few weeks into my project, but after turning away for just a few seconds, the thing scurried off into the darkness. For a week I wrenched knowing that a behemoth lurked in the garage near Dubbo, New South Wales, and then one day, as I walked in to try to fix the hopeless wreck I’d bought 10,000 miles from my home, the hideous beast showed up, sitting on a wall in plain sight, stretching its legs as if to boast of its enormity.

Before I get to megalodon, I should mention the many, many other large spiders I encountered in that garage in Australia, and the effects they had on my overall wrenching experience (I’d also mention the effects on my psyche, but I’ll leave that between me and a therapist). The very first day I started on my project, which — along with the parts car — had sat in a field for years and thus become home to all sorts of critters, I was loosening a screw holding a disintegrated taillight-housing to the rear quarter panel. As I was spinning the ratchet, a neighbor who’d come to visit told me to step back. “Oh boy,” I thought. “This is Australia. If someone says ‘David, step back!’ things are about to go down.” Luckily for me, the neighbor hadn’t been shielding me from anything that could kill me, though it was definitely something that could have caused me to wet my trousers. Behold the mighty Huntsman Spider that was a mere inch away from my hand: 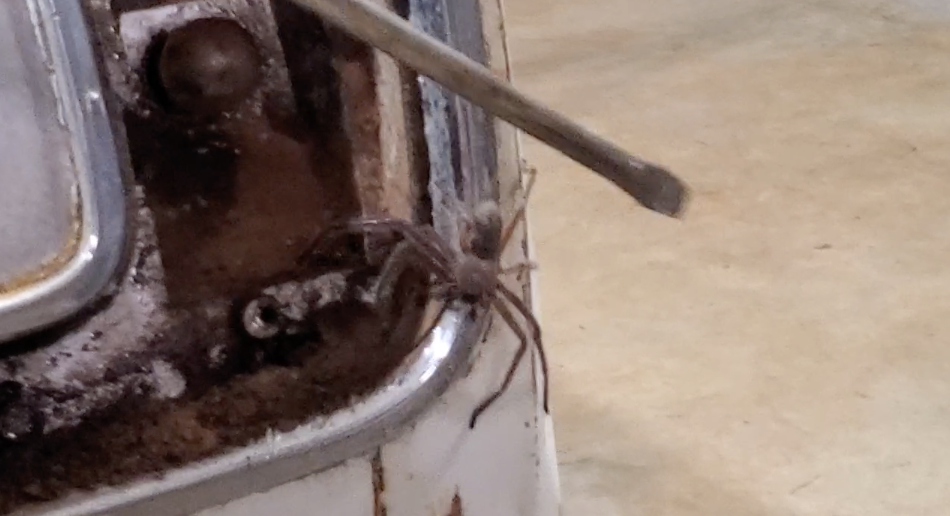 I recall that a few minutes later I had to reach my hand into the rear quarter panel just behind the taillights (possibly to undo an electrical connector or grab the back side of a bolt), but since it was dark in there, I walked away to get a flashlight so I could scope the place out first. I can’t be reaching blindly into dark places; this is Australia, after all. The neighbor I was with, Hud Johnston (a hot-rodder whom you’ll all hear about in upcoming articles) didn’t have time for my childishness, and just reached his arm deep into the dark abyss and grabbed what needed grabbing. I was a bit embarrassed, I’ll admit. Almost as embarrassed as when my host Laurence and his mom asked me to pick up the tarp that had been sitting out in the paddock where my utes had sat for many months. I looked under it to find a bunch of Huntsman Spiders. 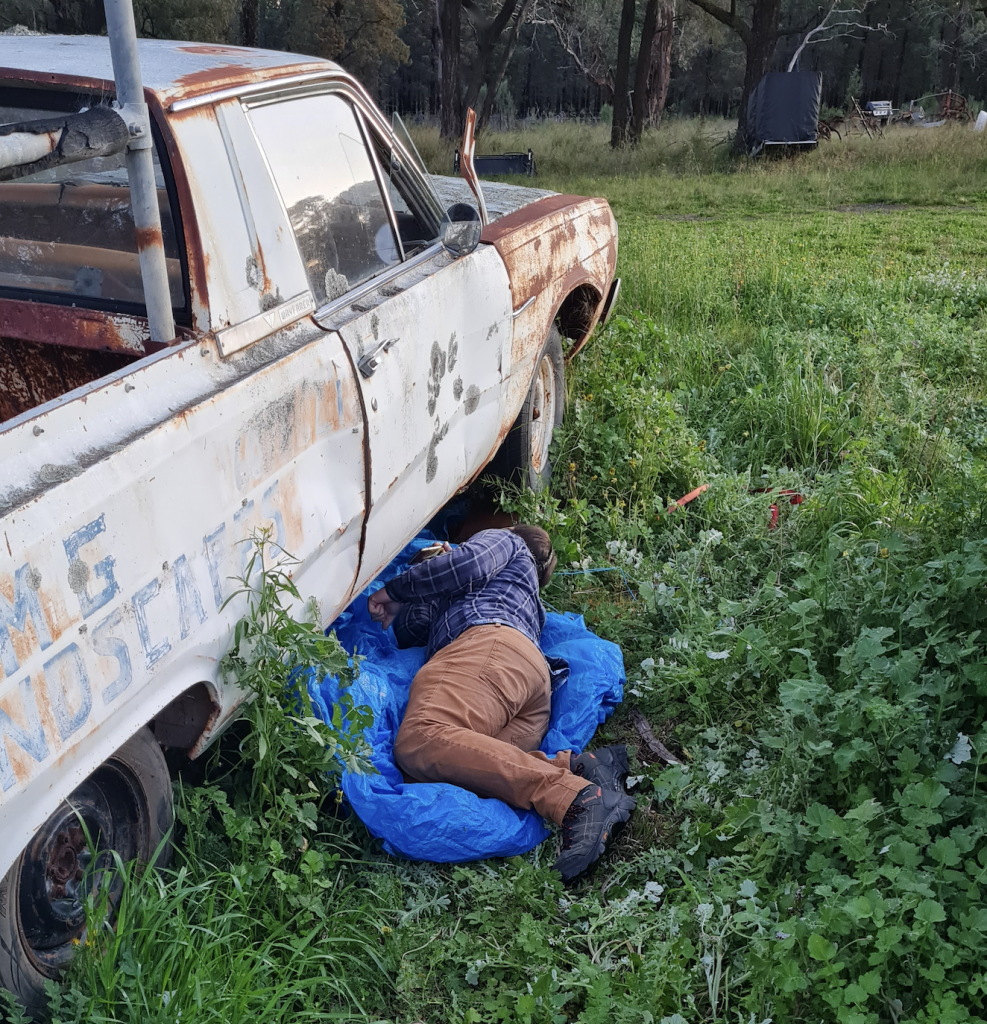 I tried shaking them off, but they wouldn’t let go, so I carefully carried the tarp, shaking it every now and then to prevent the leggy beasts from latching onto my hand. From the outside, I looked like a complete dork, and Laurence and his mom rightfully let me know it. 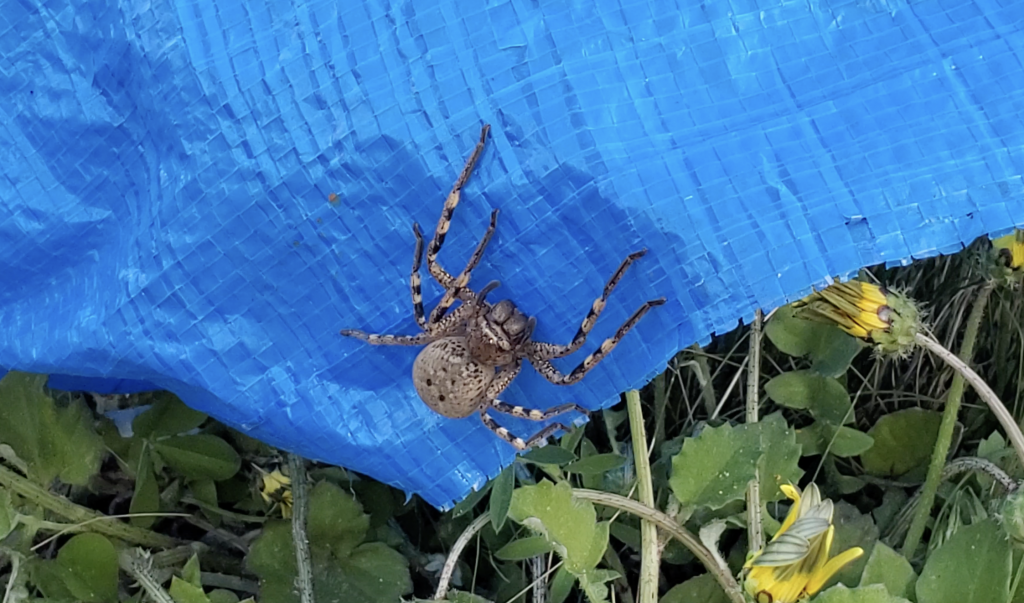 A week or so after my initial spider encounter in the garage, when I opened up the door to start another day of work on the ute, I saw this hanging from my firewall: 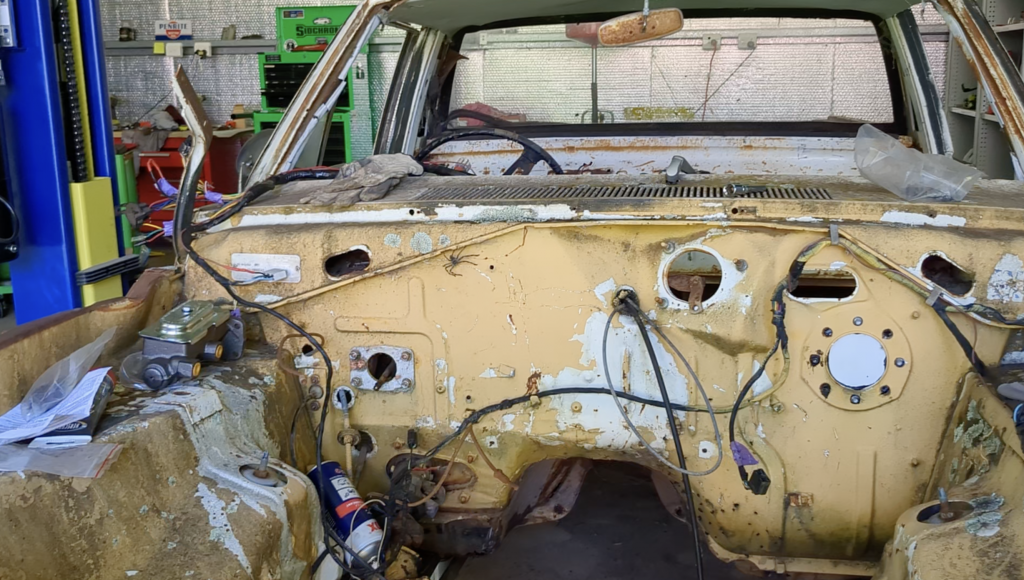 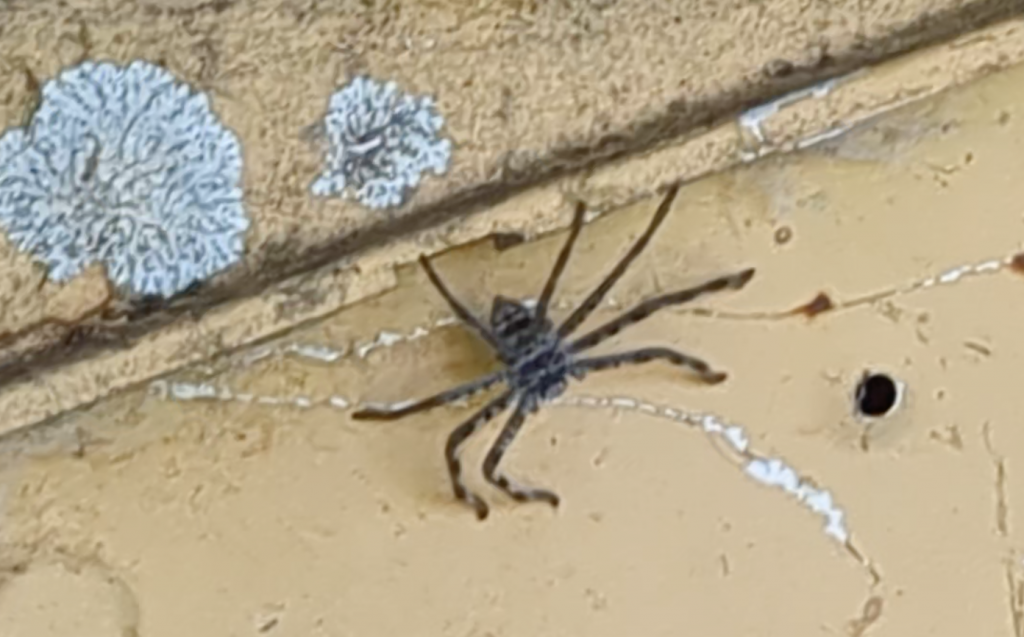 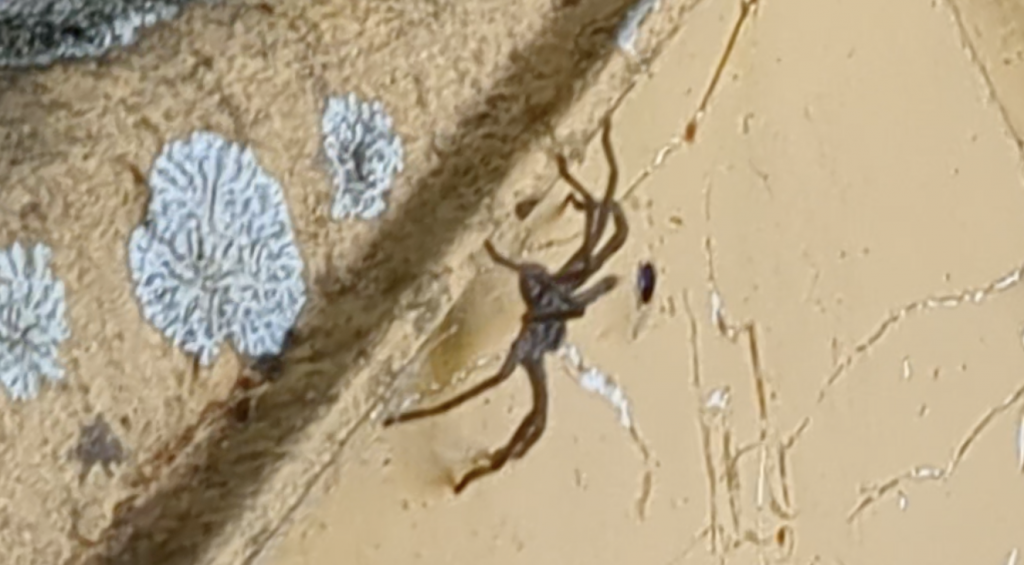 This was a problem. I had to do some work underhood, and just knowing that beast was there just wasn’t going to work for me. Unfortunately, I cannot get myself to kill spiders, no matter how hideous they are. It’s just hard for me to justify if they’re not particularly harmful and generally leaving me alone. I’m killing them because I find them scary? My weakness isn’t a good enough reason.

So I had no choice but to try to capture the eight-legged monster. This took forever — at least 30 minutes — and that’s 30 minutes I didn’t have, as the project was way behind. Chasing this ridiculously fast critter around the garage wasn’t easy; when it started walking up the lift post, I knew I had to catch it there or it’d climb up and out of my reach. I struggled for minutes trying to build the nerve to just catch the spider in a box, but that meant I had to get up-close, and my weak self just wasn’t feeling great about that. 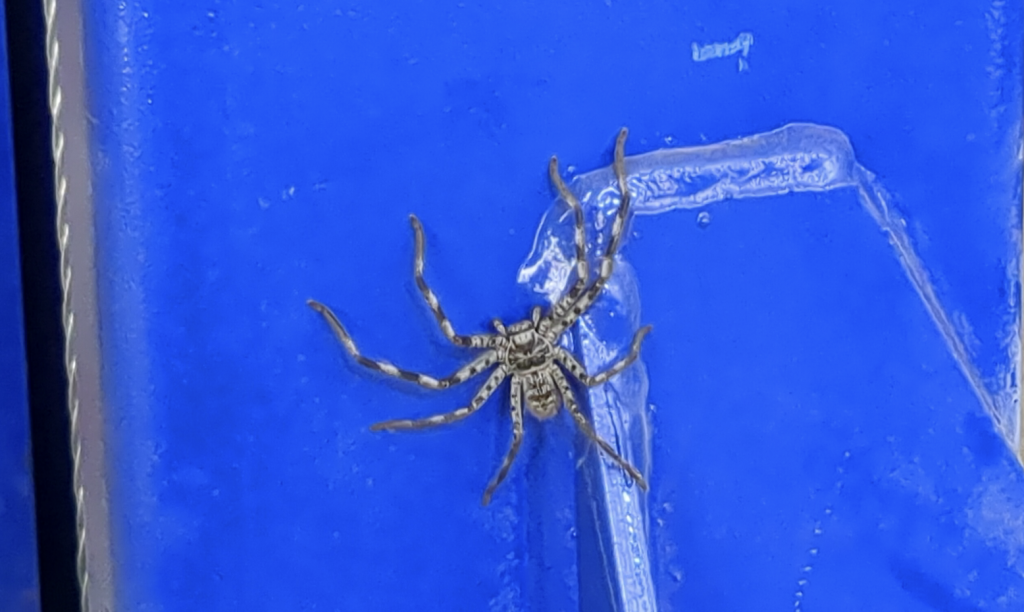 My solution was a broomstick with a cheese box taped to it. 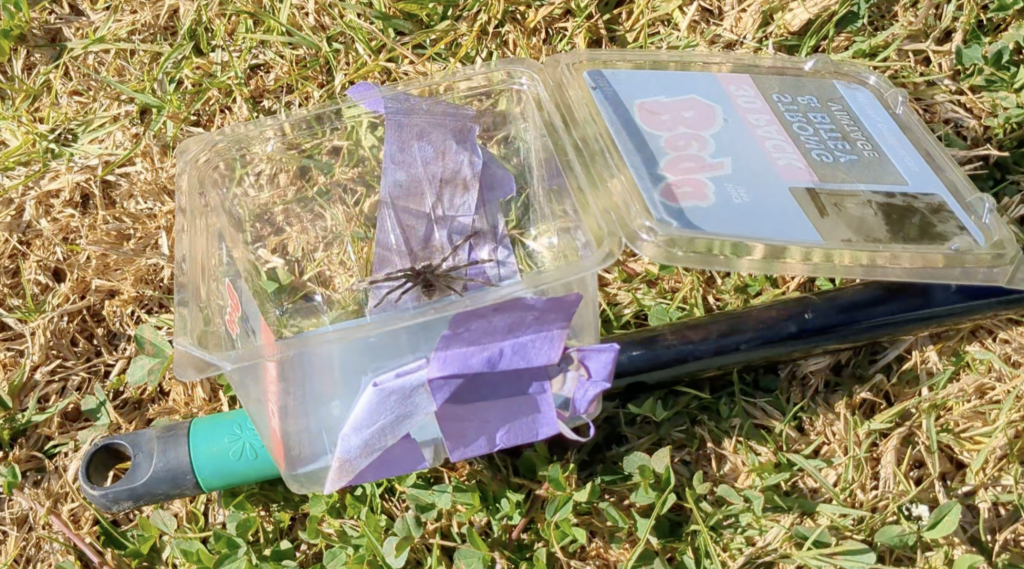 It actually worked quite well, as it allowed me to keep some distance from the spider, and the plastic box was smooth enough that it kept the spider from crawling out until I could get the lid on. (I would have liked to have used a box that wasn’t labeled “strong & bitey,” but it’s what I had available):

I released the Huntsman into the grass, and Hud used some cardboard to usher it away from the garage: 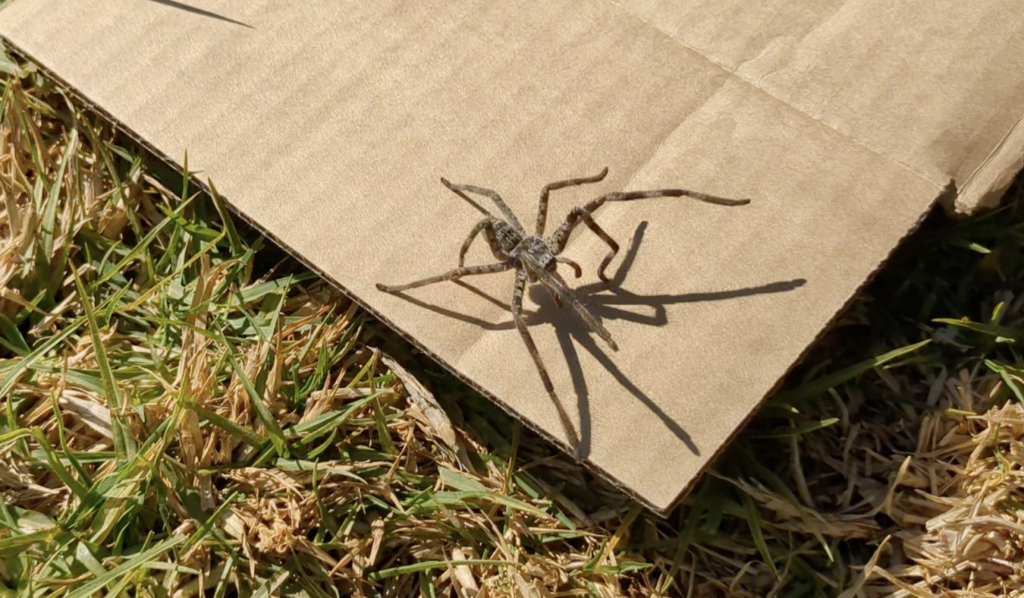 Here’s a video of the encounter:

A few weeks in I began seeing Huntsman Spiders almost daily. They were in the car, under the car, on the garage walls, behind toolboxes — everywhere. 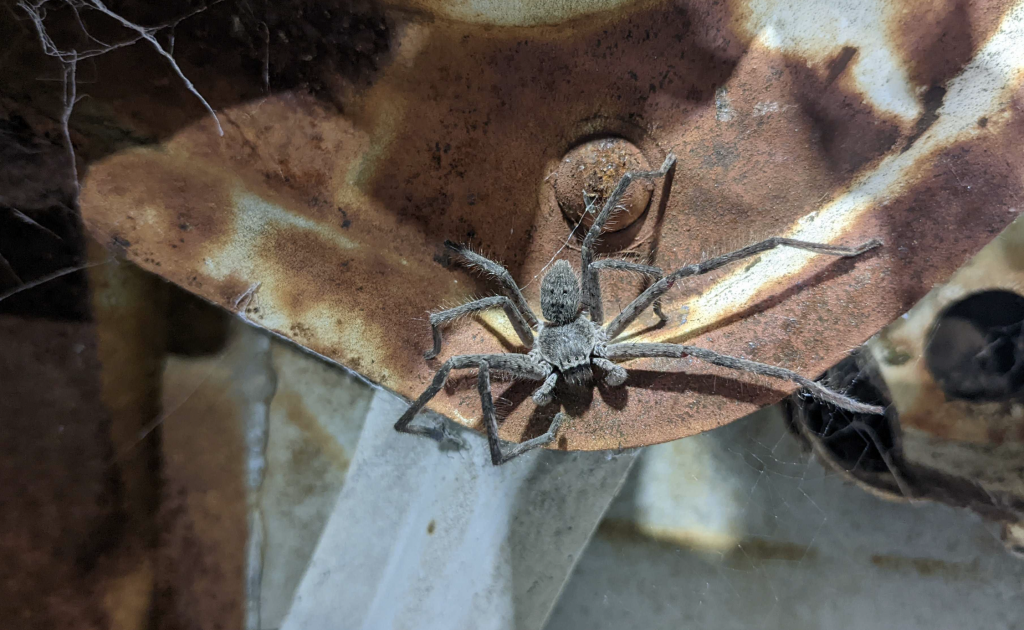 There came a time when I had to do some wiring under the dash, and I knew that somewhere in the vehicle was a Huntsman Spider, as I’d spotted it before. What was I going to do, just not complete the project? That wasn’t an option, so I pushed on and tried to ignore the fact that a three-inch spider could be just inches from my face. I had work to do.

Over time, I became comfortable with the arachnids, as long as they didn’t surprise me. I even began touching them:

Three weeks in I actually allowed one to crawl on my hand, briefly. And while I know that may not impress anyone, the reality is that spiders were among my worst fears when I started this project. Anytime I saw one, even on video, I’d become hyper-sensitive and feel phantom spiders on my body. Rational? Not at all. Why is a 170 pound man afraid of a non-deadly 0.01 pound spider? This was something I was keen to overcome, and I can say that, after some time working on those two spider-infested utes in that garage in Australia, I made some good headway. At least, that’s what I thought — until I spotted megalodon.

This was a spider that I’m fairly sure killed another humongous Huntsman Spider that was hanging upside down, dead in the ceiling of the garage. I remember thinking how huge that dead spider was, turning away, then looking at it again, only to glimpse just a few inches away a spider that was, somehow, almost twice as big. It was megalodon, and though it disappeared for a week, it eventually showed back up: 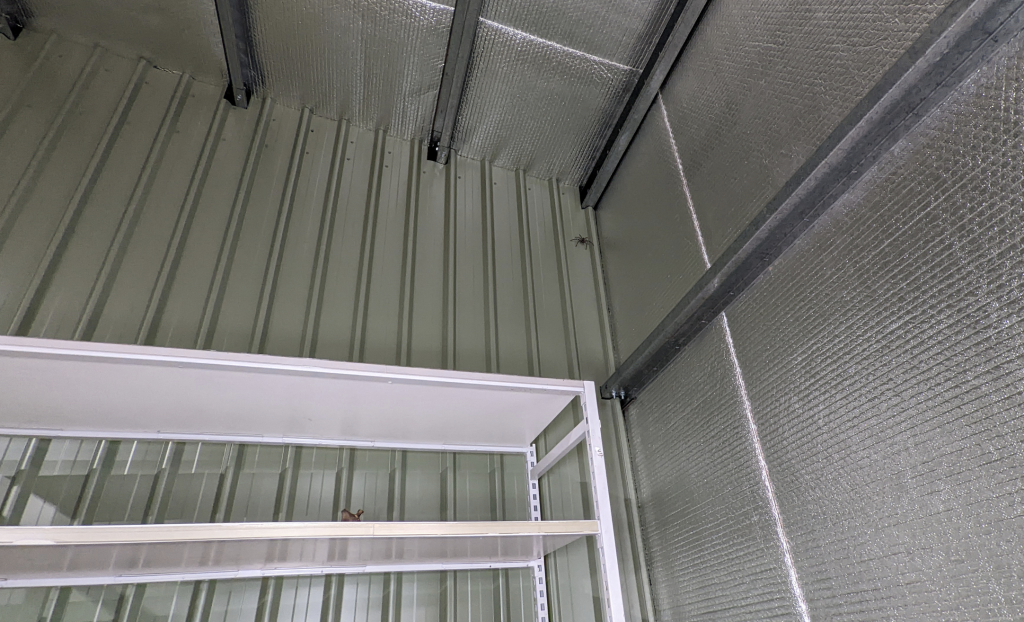 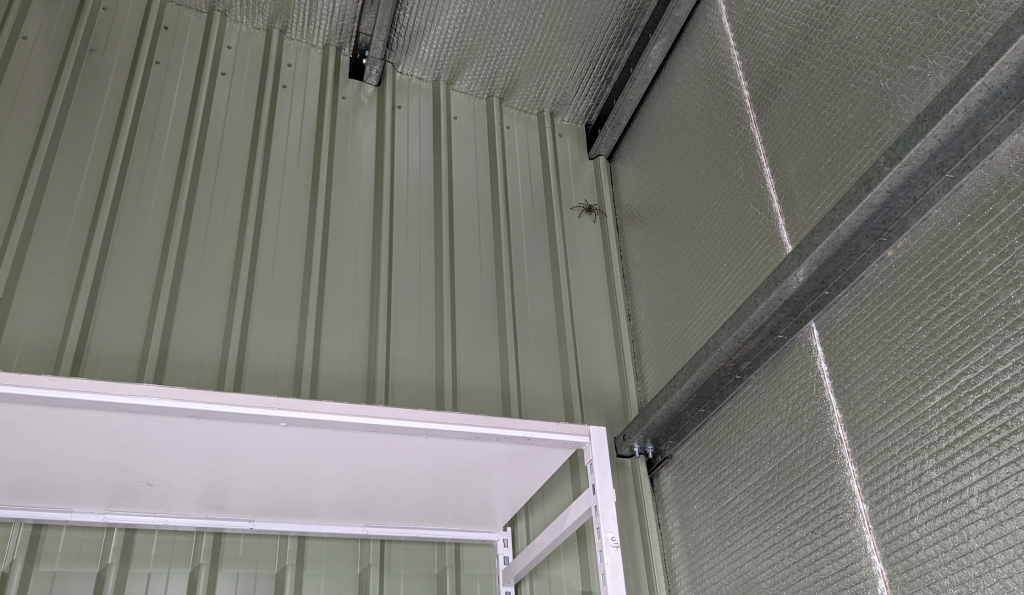 To give you an understanding of this thing’s size, just have a look at this photo:

Notice how the rightmost leg is touching the peak of the right rib on the garage siding. The leftmost leg appears to be a centimeter or so away from the beginning of the slope of the left rib. For context, I placed my hand in roughly this same position: 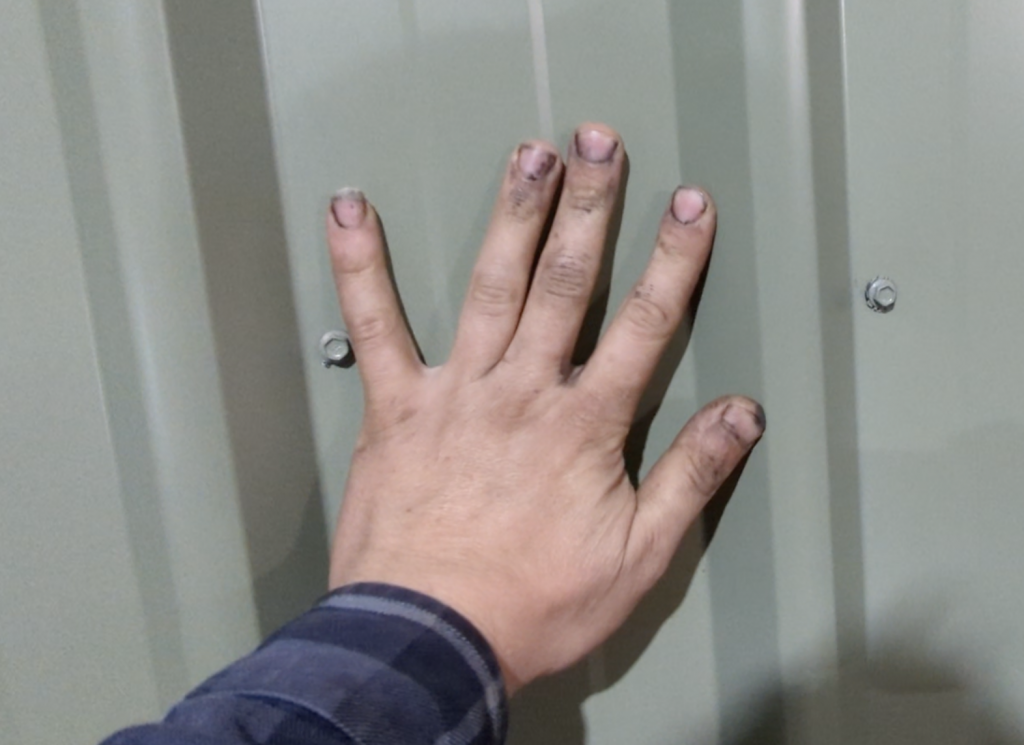 That’s a five-inch spider — at least. Even I, a now-much-tougher man who can touch large Huntsman Spiders, couldn’t help but get goosebumps at the sight of megalodon.

Thank goodness most of the Huntsman Spiders I’d seen were smaller, or I’d have been far too scared to do any wrenching on those two utes. I’d already wasted far too much time trying to get the nerve to capture the three-inch spiders. A five or six inch one like megalodon would have required hours of mental preparation, a longer broomstick, and a bigger Strong & Bitey box.

Oddly, when I later saw a hyper-venomous Redback Spider atop my brake drum, I didn’t feel scared at all. Talk about awful human instinct: Scared of a largely-harmless Huntsman, but totally fine with a deadly Redback.