Facebook-f Twitter Instagram Rss
Menu
Menu
Home » Why I’ve Decided To Fix My Parts Car Instead Of The Kangaroo-Hunting Ute I Flew 10,000 Miles To Australia For

Why I’ve Decided To Fix My Parts Car Instead Of The Kangaroo-Hunting Ute I Flew 10,000 Miles To Australia For

You know things are bad when your parts-car becomes your main car. But that’s just the situation I’m in right now, as I put my 1969 Kangaroo-Hunting ute — the Chrysler Valiant that I flew 10,000 miles from Detroit to Dubbo, New South Wales to fix and then road trip it to Australia’s “Burning Man” of ute shows, the unhinged Deni Ute Muster — on a hoist. And things were bad underneath; really bad. Here, let’s take a look.

New South Wales’ strict inspection requirements mean one can’t just sand a set of ignition points with a matchbox, run a garden hose from a jerry can to the carburetor, pop in a new battery and start driving on public roads legally like you can in much of the U.S. Vehicles have to be devoid of any potentially-structural issues like rust (that includes in floorboards, beds, and rocker panels), and all cars have to pass lighting, braking, and steering/handling-related inspection.

The latter requirements aren’t really my concern, since I can do some electrical work and I can confidently replace suspension and steering components. It’s the structural and rust-related mandates that convinced me that the vehicle I flew all this way to Australia to try to resuscitate is never going to be legally on the road in the four weeks I allotted. Frankly, the parts car doesn’t look that much better at first glance, but I’ll get to that in a second. 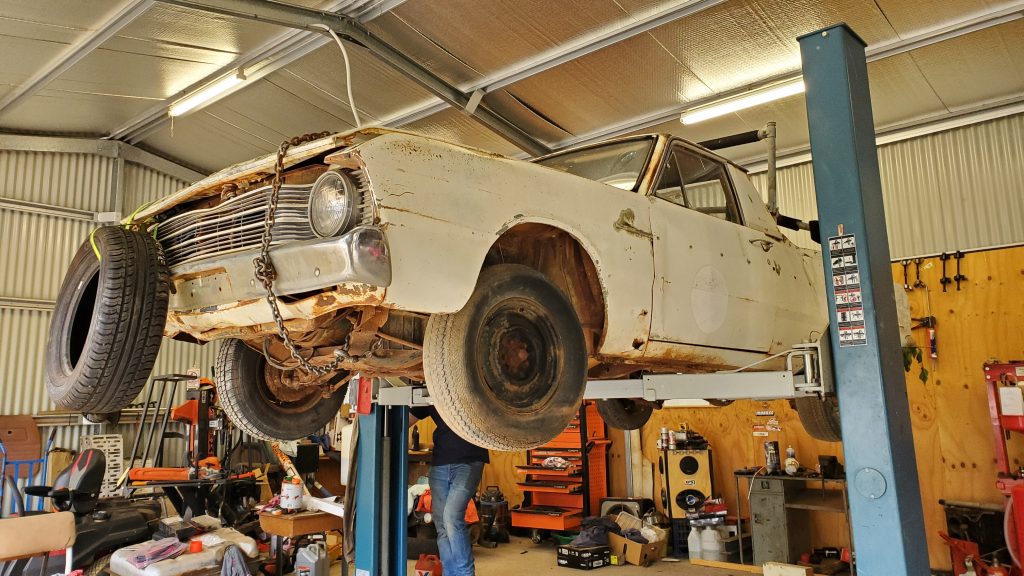 In rural parts of Australia, there exists a concept known as a “Paddock Basher.” It’s basically just a beater that stays on the farm and off public roads, since it’d never pass inspection (or “rego,” as they say around here). This descriptor very much applies to the kangaroo-shooting ute I planned to fix and take to the Deni Ute Muster, because based on the condition of the underside, I can say this thing has been beaten on. Hard. 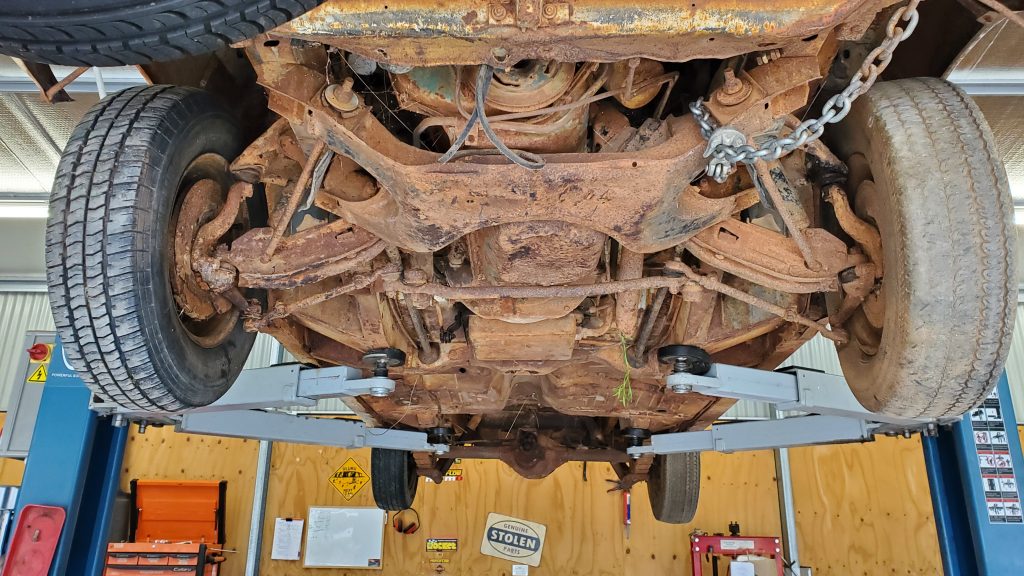 Never mind the hideous dipstick that my friend Laurence pulled out of the Chrysler Slant Six under the hood; that’s the least of my worries, as swapping a motor isn’t the end of the world. What is a concern is the ute’s body. 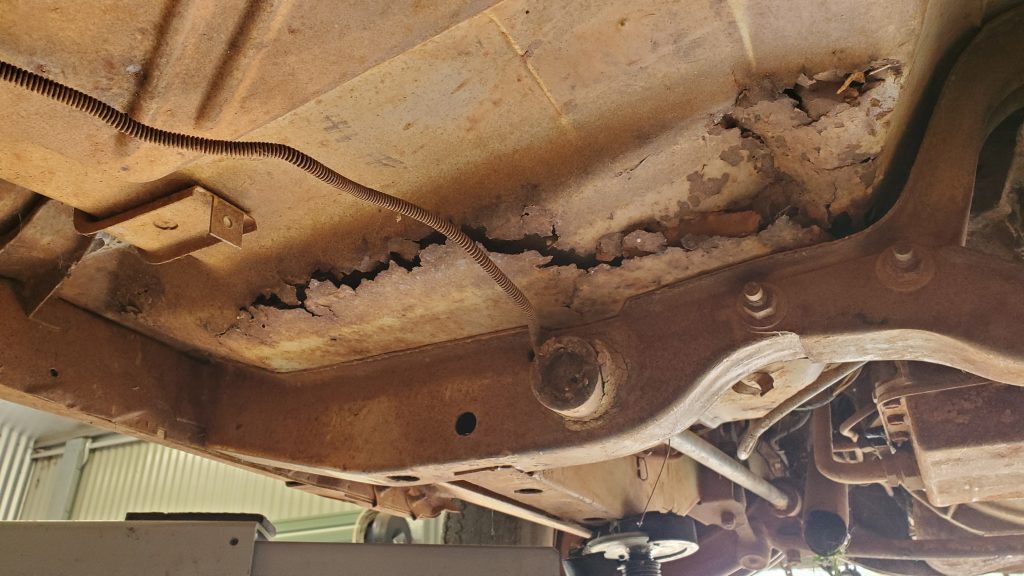 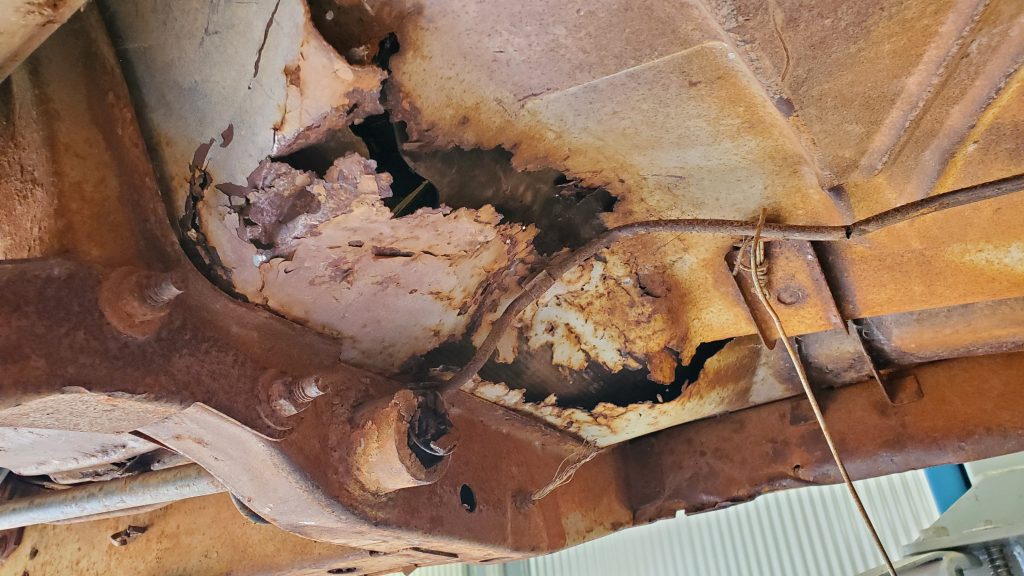 What you’re looking at are Wi-Fi floorboards (this is a term that the kids these days are using to describe a nonexistent thing, much like how Wi-Fi indicates lack of a wire (wireless)), and what does remain of the floor appears to be about as thin as tissue paper.

Even the floorboards behind the driver are perforated: 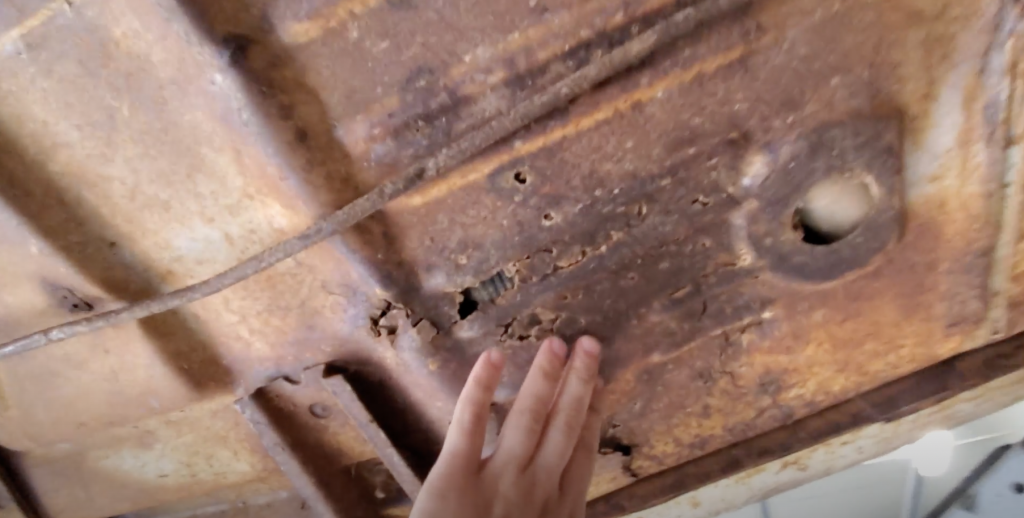 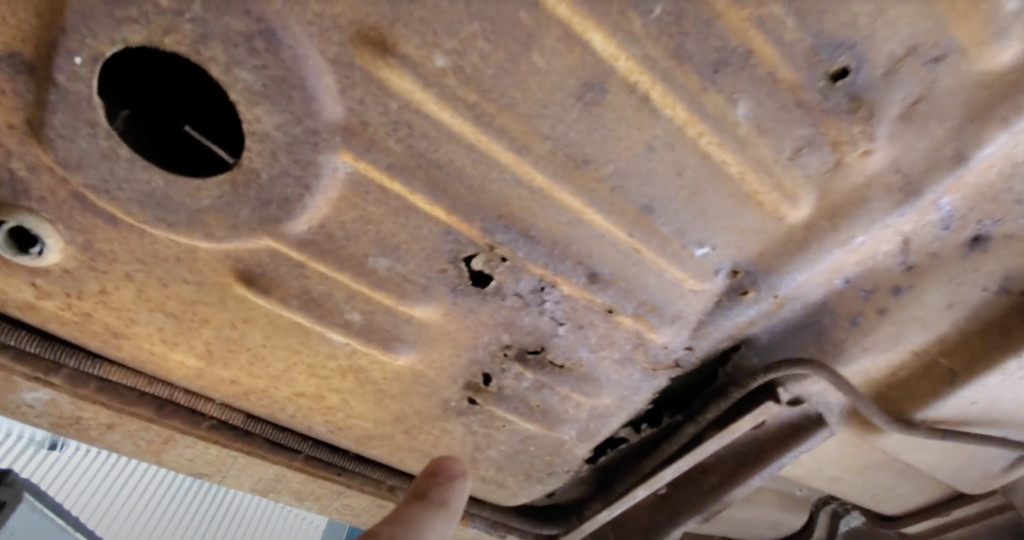 All of this would have to be replaced to pass inspection, and it’d have to be done in a way that convinces a mechanic that no significant rigidity has been lost. Riveting in a stop sign won’t work, and just slapping in some flat plate without closely matching the shape of the original floorboard could raise an eyebrow if done improperly. In Australia, major vehicle modifications have to be approved by an engineer, so a car like my 1969 Valiant is expected to remain as true to factory spec as possible. 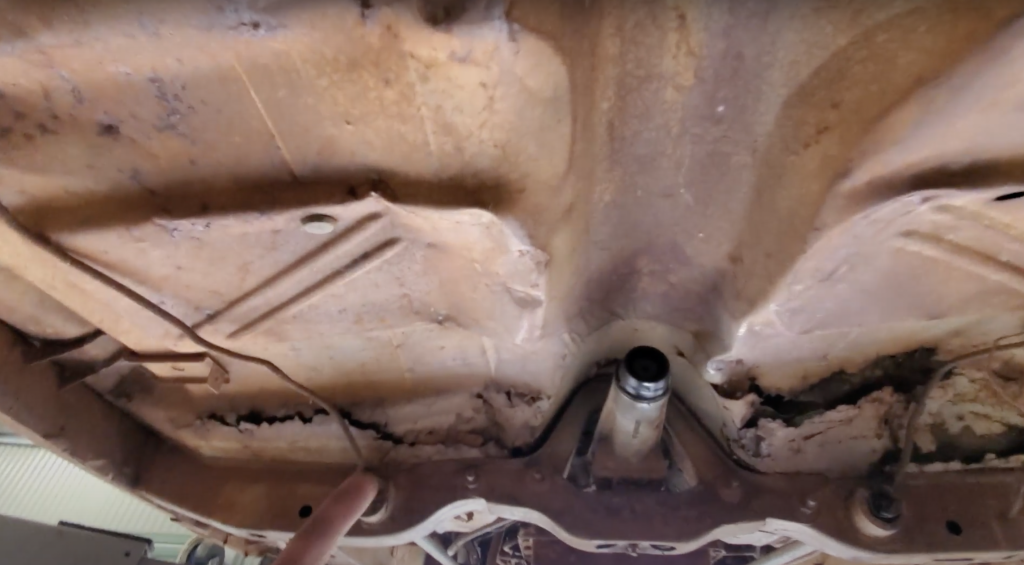 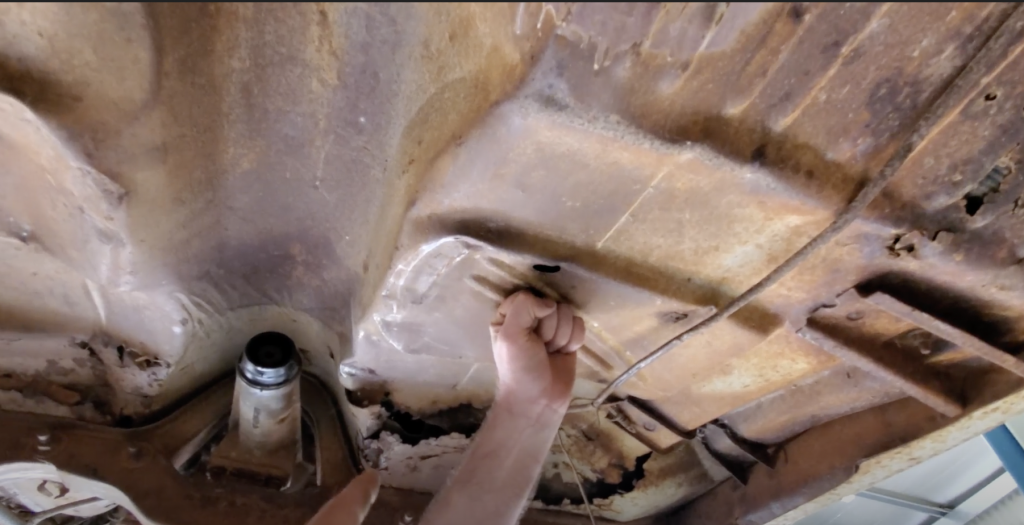 The ute’s floor panels that do exist are thoroughly bent, possibly as a result of the vehicle being moved around by a forklift, but almost certainly due to some off-roading and, possibly, jumps. In the photo just above the last one, you can see a bump in the center of the transmission crossmember where a small bolt hangs down, and below you can see how banged up th engine oil pan is: 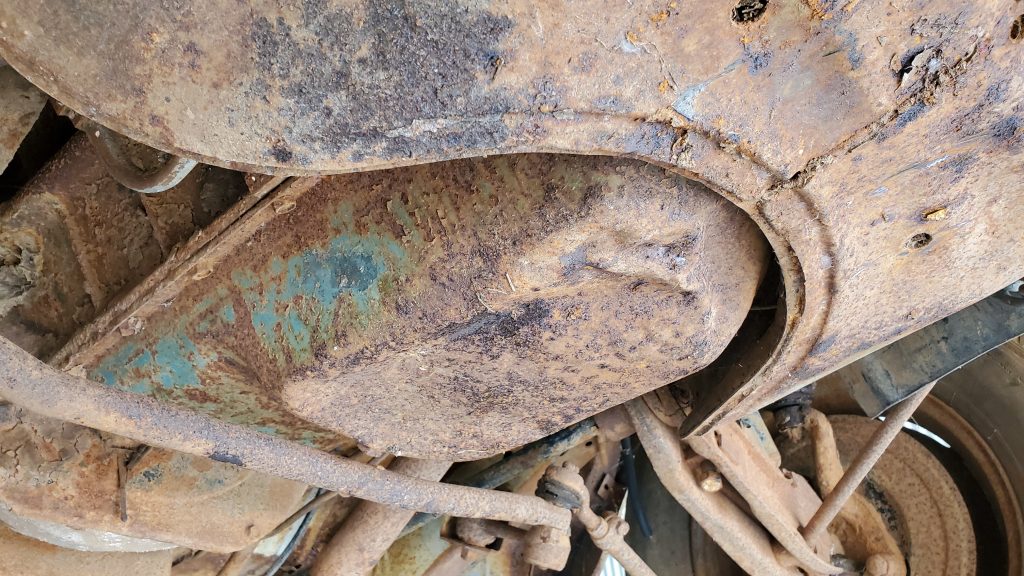 Perhaps more alarming is the front driver’s side frame rail, which is bent, and would likely have to be pulled out. It’s possible that an inspector would let it slide, but putting hundreds of hours into a car whose frame can’t be properly and easily straightened seems high-risk: 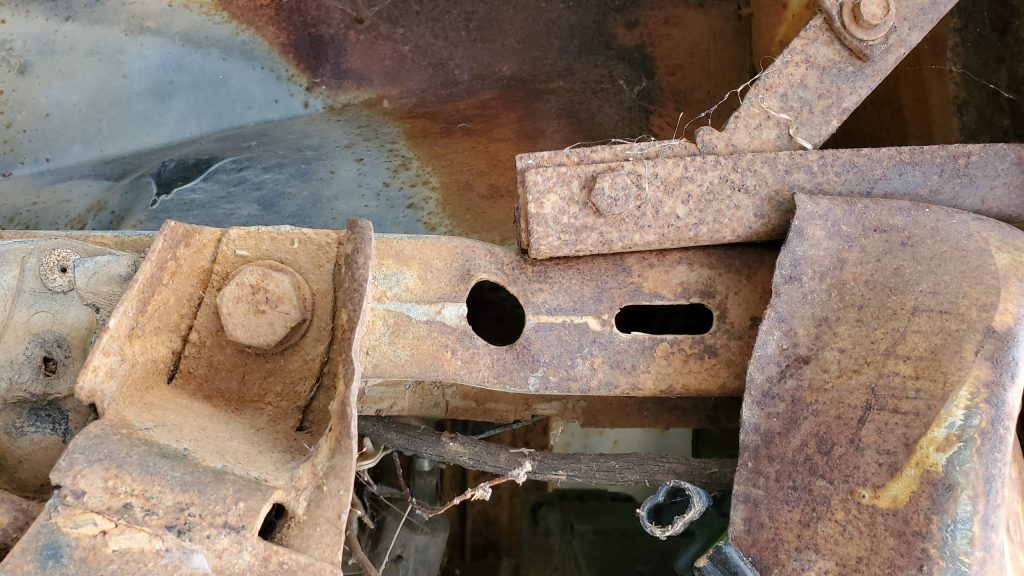 Other, less significant concerns include a bent front strut rode. Here’s the driver’s side, which looks decent: 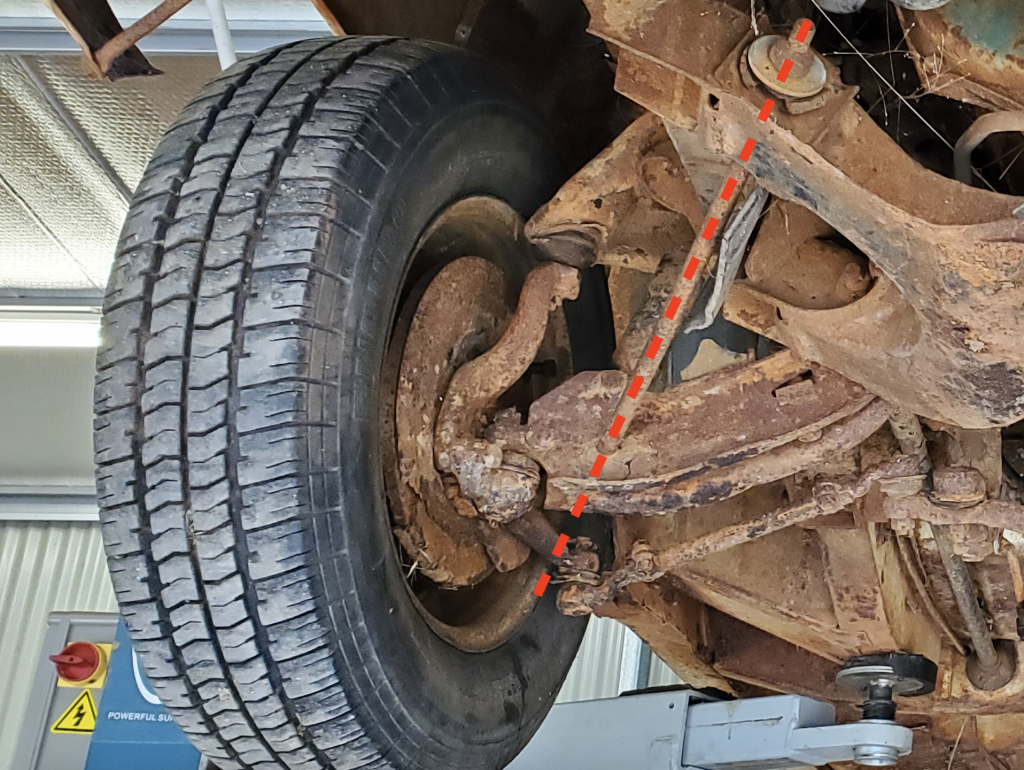 And here’s the bent passenger’s side: 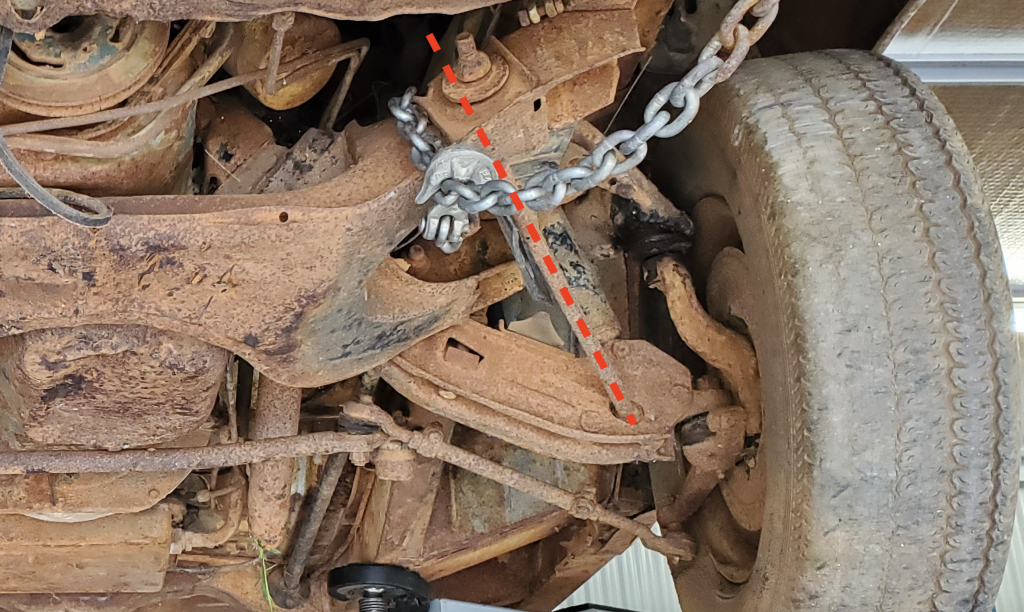 The exhaust is also total garbage; a piece fell off onto the ground while I was filming: 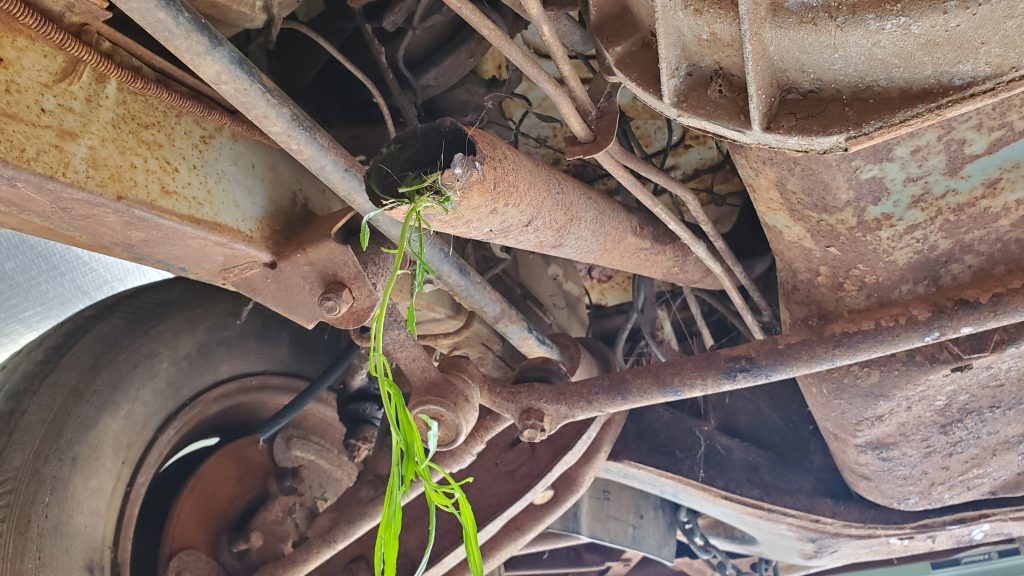 Oh, and the driver’s side front brake and steering bits were all rusted out, as this wheel was buried in the dirt for who knows how long: 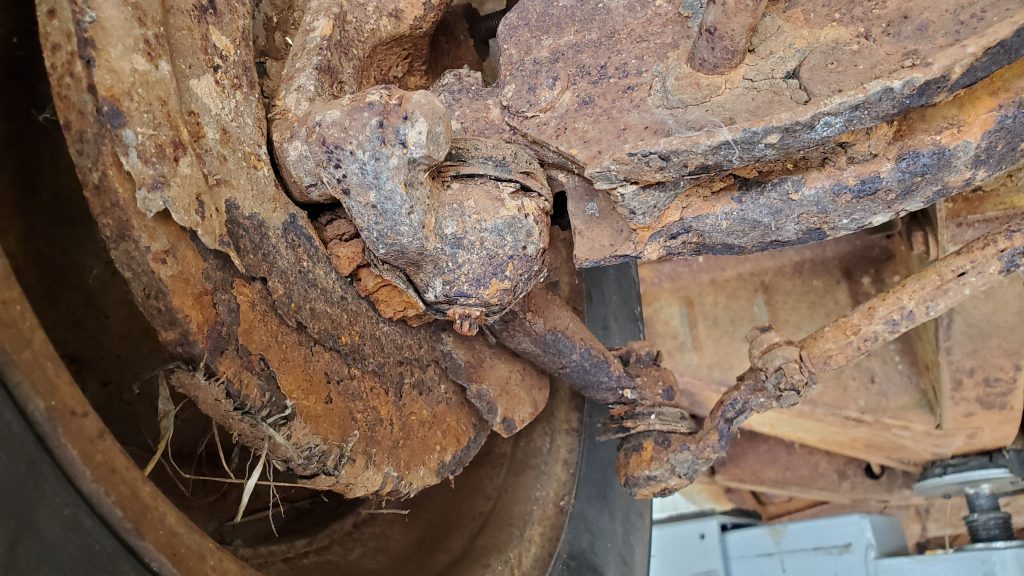 Ignoring engine and drivetrain issues, and focusing solely on the question “Which body offers the the best starting platform for a project?” I began realizing as I walked under the hoist that the kangaroo hunting ute wasn’t ideal, especially considering the rust in the front part of the bed, particularly on the seam behind the driver where the bed floor meets the bulkhead: 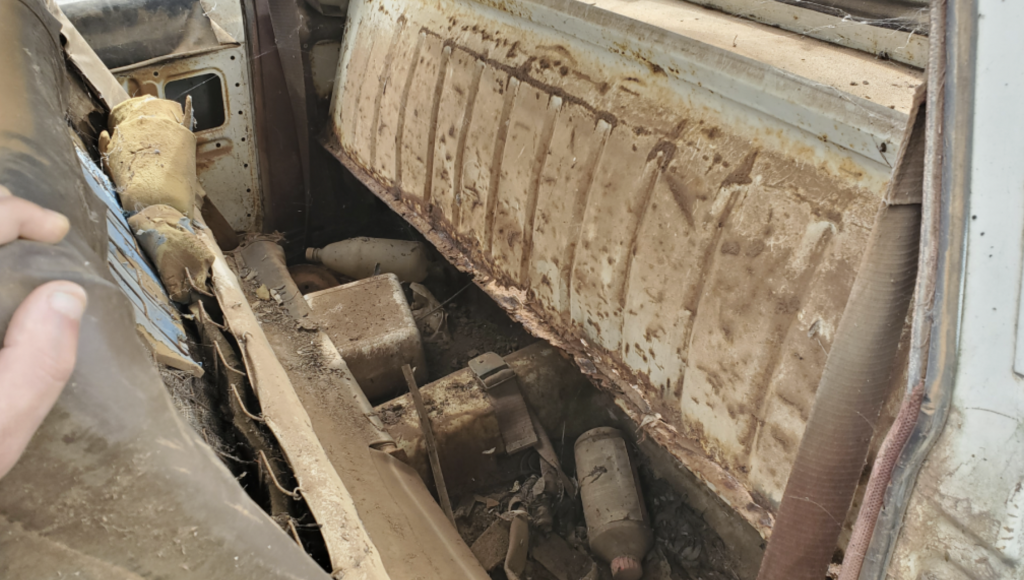 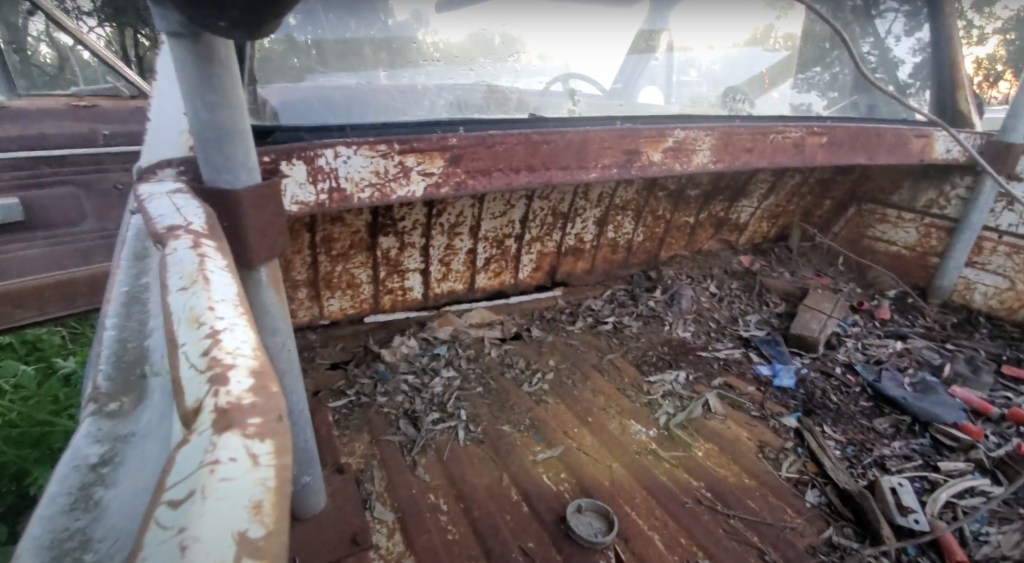 Add the rust holes at the bottoms of the fenders and on the rocker panels, as well as all the big dents in the body, and it’s hard not to look over at the parts ute and say with a hopeful tone: “You know, I know it’s just a shell, but what is there doesn’t look horrible? Maybe it’s a decent shell?” 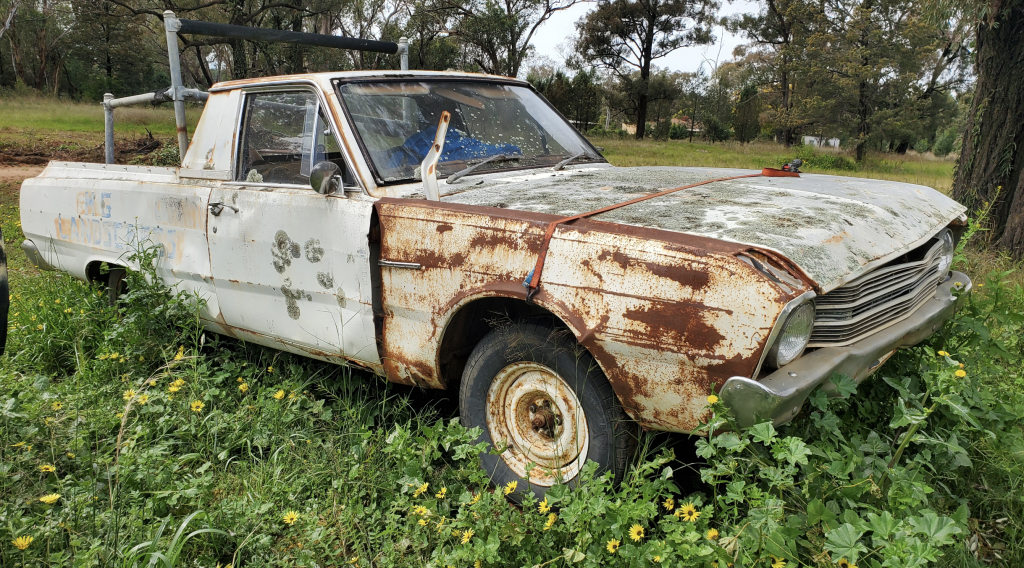 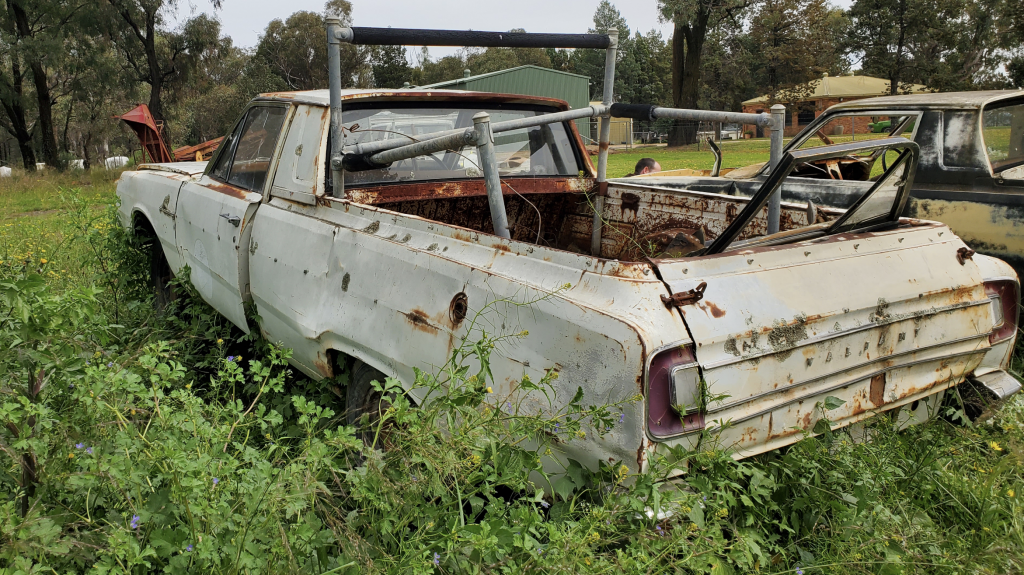 So Laurence and I chucked the parts ute up on the hoist to see which of these pathetic beaters we’d be spending far too much time trying to get through New South Wales’s inspection and then to the big ute party over six hours away.

Is The Parts Ute Any Better? 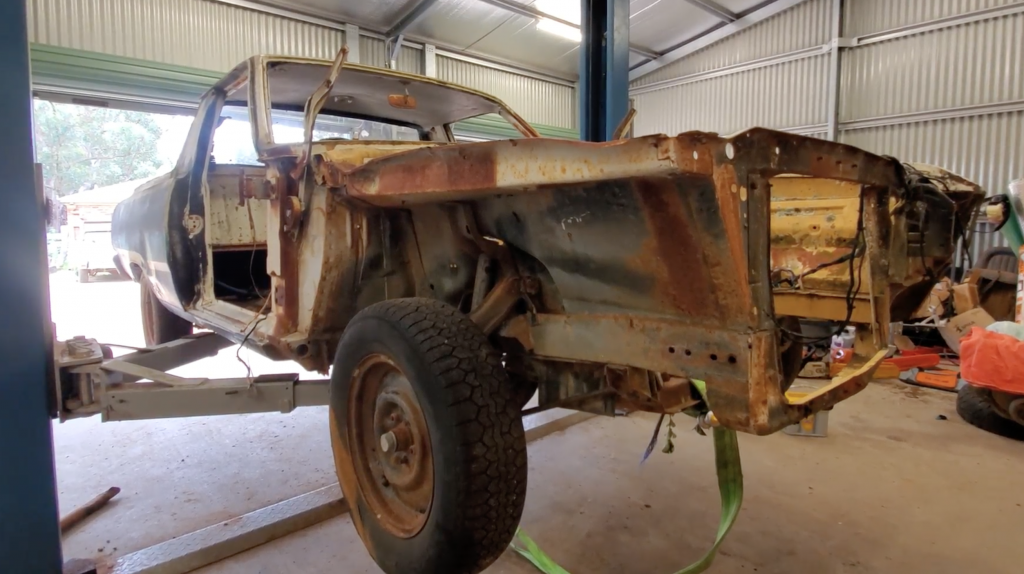 Look at that thing. It’s really not even a car so much as it is some metal put together with fasteners and welds. There’s no engine, no transmission, no front end, no radiator, no right fender, no driver’s-side door, no windshield, no hood, and on and on — this isn’t a vehicle that I would ever have flown 10,000 miles to fix. If my host, Laurence, had sent me a picture of this ute and said “Wanna fly to Australia and fix this in four weeks?” I’d have said “Absolutely not. That’s going to be the death of me.” And yet, the state of my project car, the kangaroo ute, meant desperation began kicking in, so I had to at least consider the parts ute becoming the main one, as much as I didn’t like the idea. 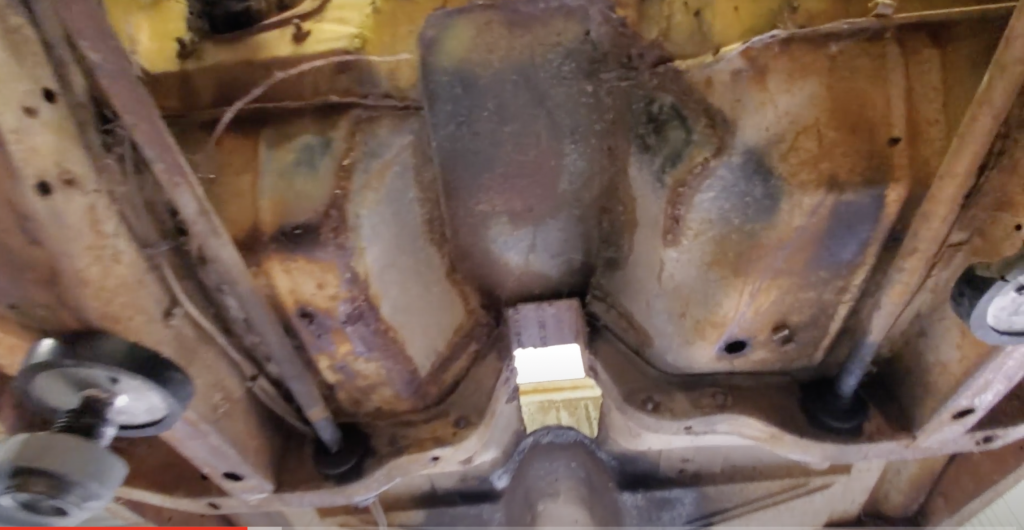 One of the first things I noticed once the parts ute was on the hoist was that the transmission tunnel at the base of the firewall just behind the engine bay has been modified to fit a floor-shift transmission. There’s a bunch of shoddy welding of sheetmetal over top of sections of the body that have clearly been cut/banged to make way for a different gearbox. It’s all a bit janky, and maybe an inspector might give us some guff, but Laurence assured me it’s probably fine. 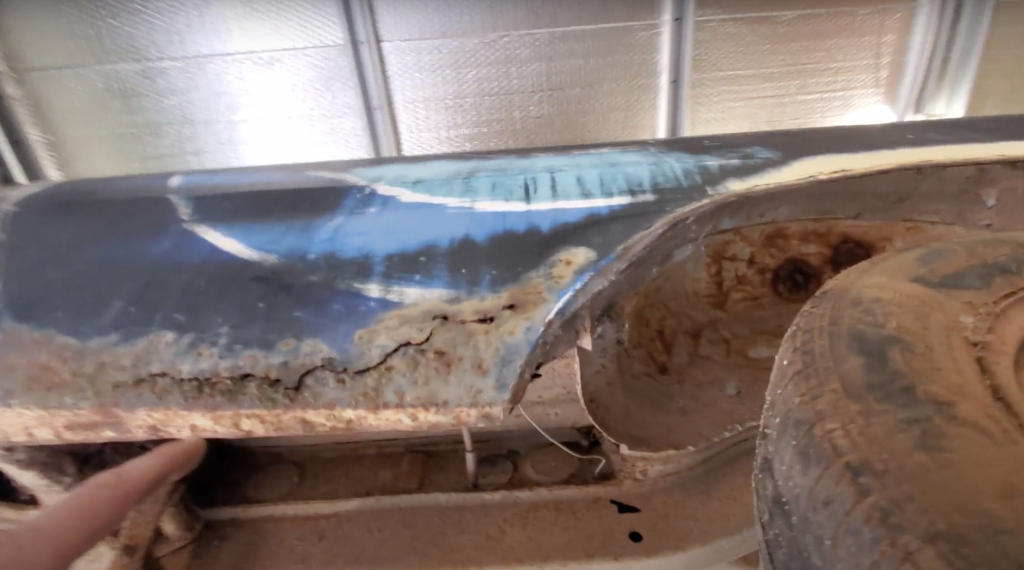 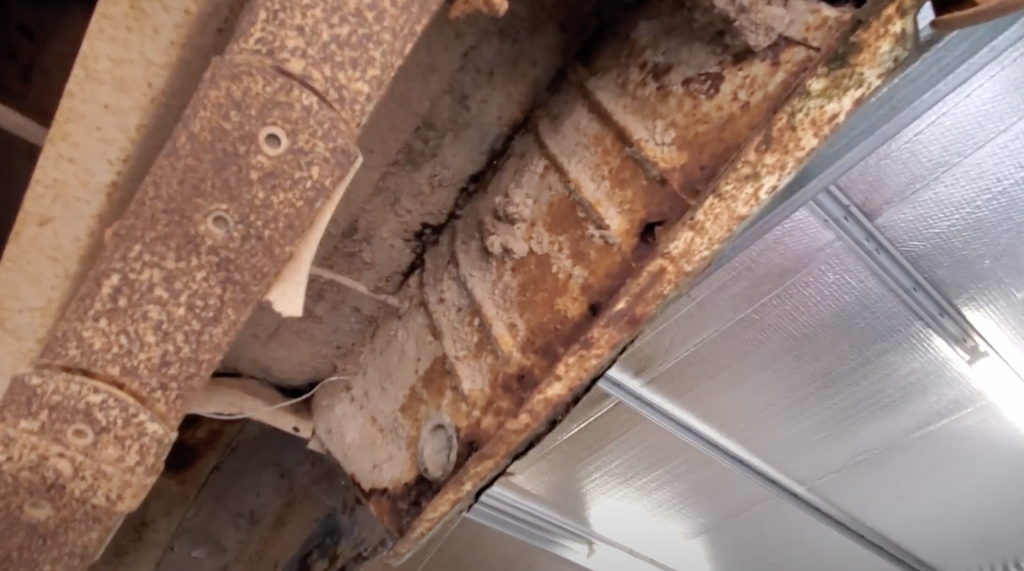 There’s also a fairly large hole the driver’s side rear lower bedside just aft of the wheel; the rust goes all the way through from the inner panel to the outer, more visible one. Plus, there are some parts of the floor that are so dark-brown and flaky, it’s clear they’ll become holes as soon as I touch them: 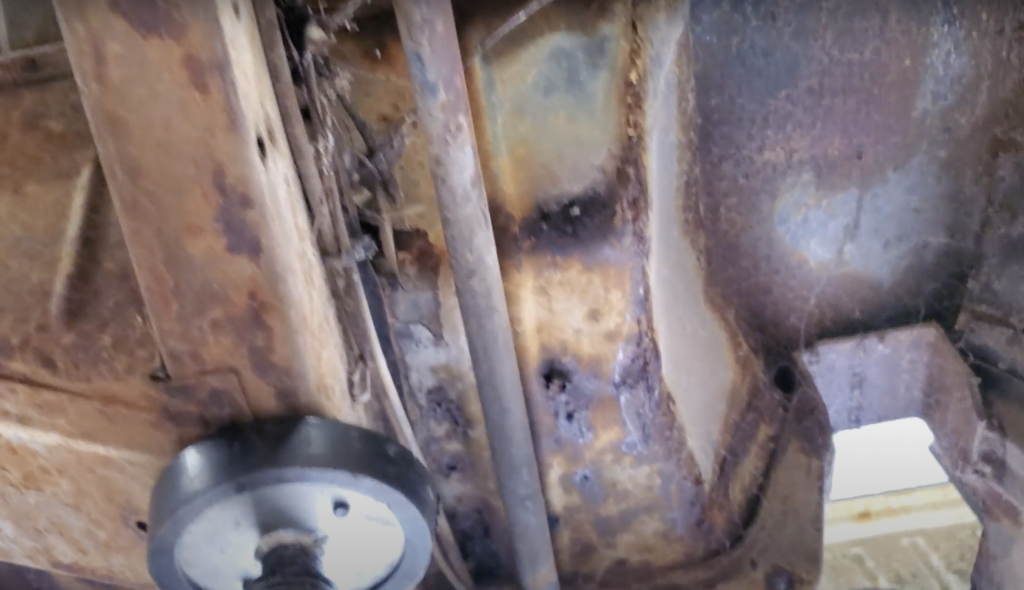 You can see some of the holes/scaly rust in the front floorboards from the top: 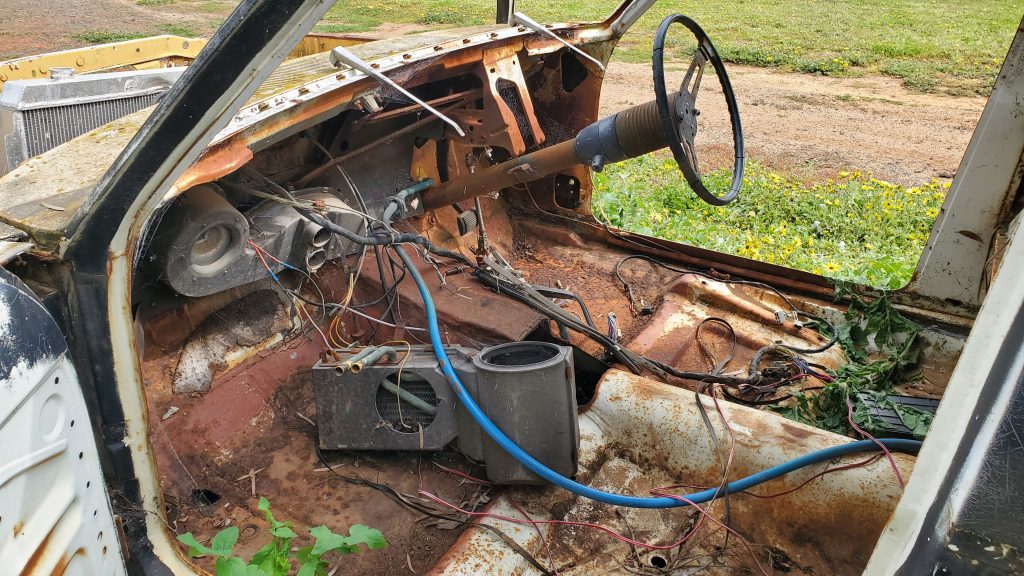 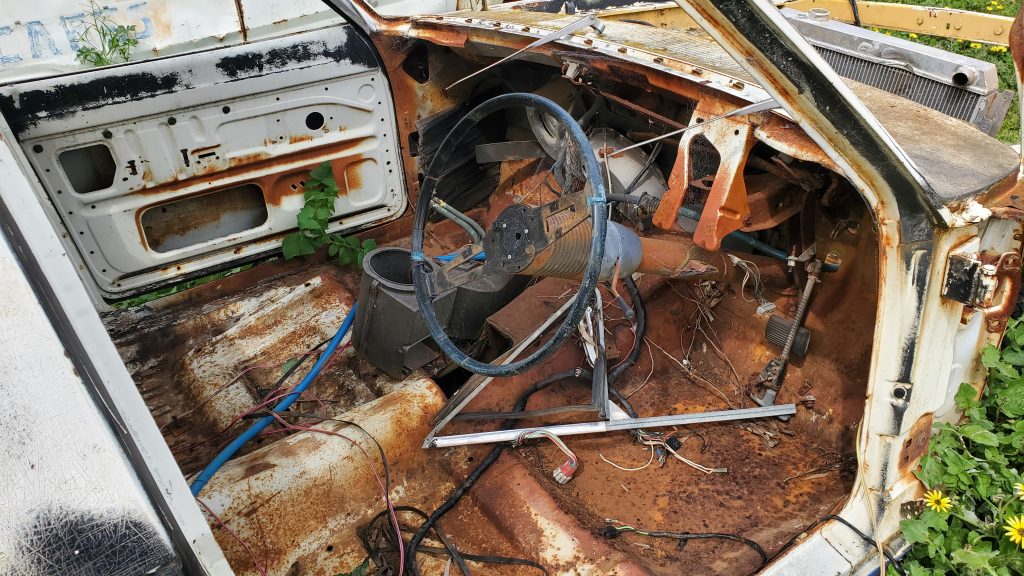 But honestly, aside from the rear bedside hole, the shoddy tunnel modification, and the perforations on the flat part of the front floorboards, the parts ute’s body looked solid underneath: 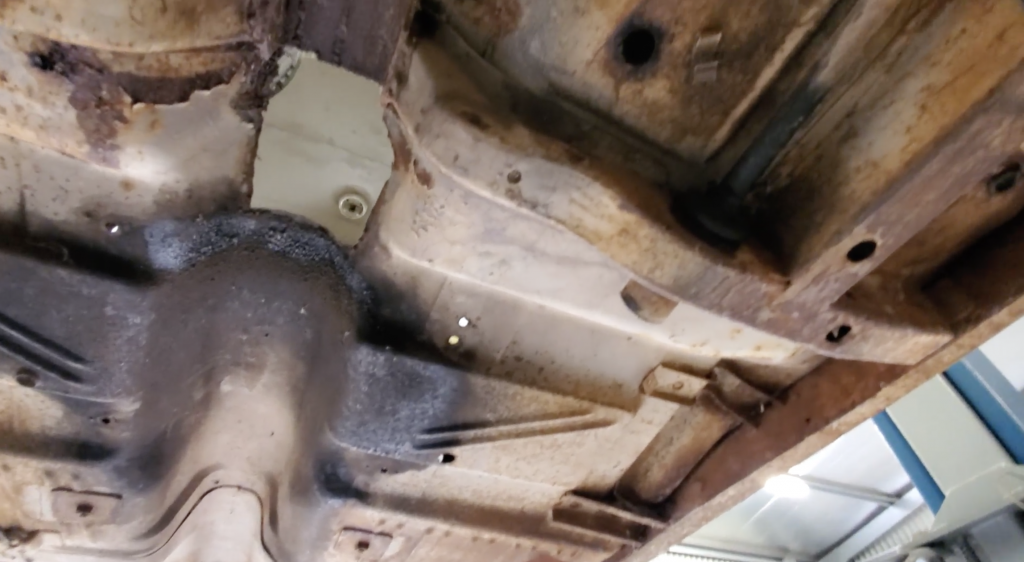 There was still some rust in the bed floor (see below), but it wasn’t at the seam with the bulkhead — it was just the flat part of the bed, so it should be relatively easy to replace: 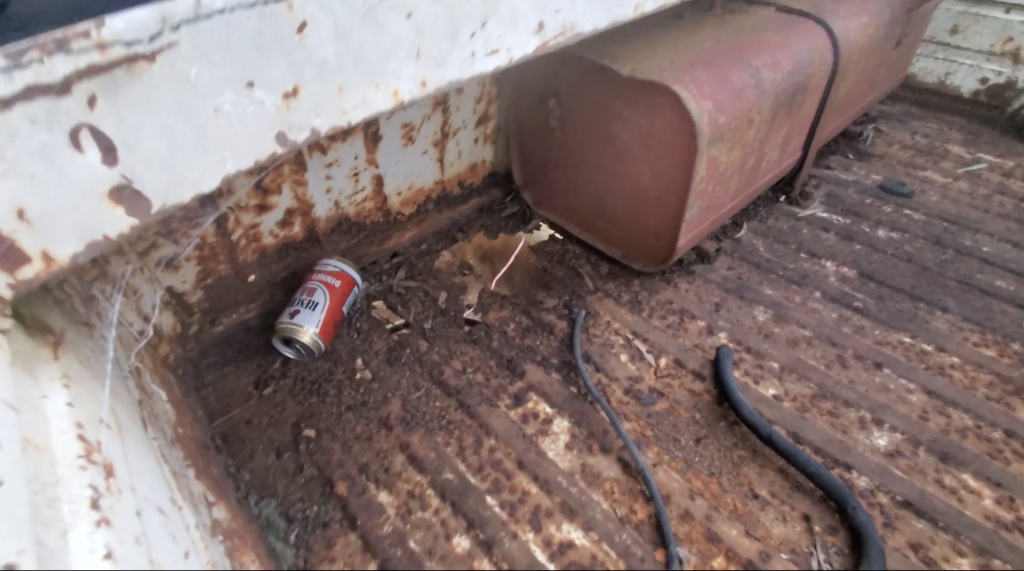 The parts ute also has a perfectly straight frame rail: 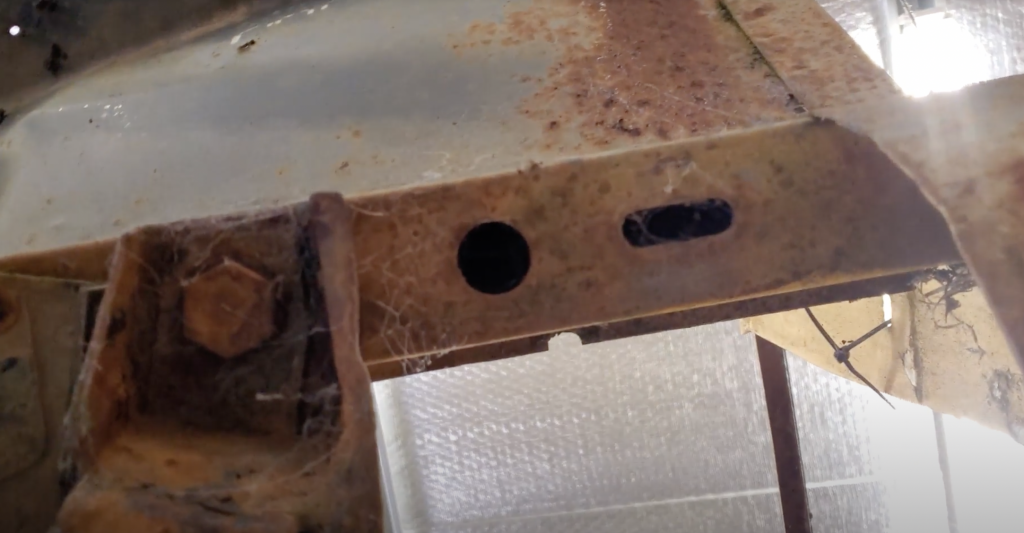 I Guess My Parts Car Is Now The Main Project

The car on the left is the one that Laurence and I have to fix in four weeks, then drive to the Deni Ute Muster. That car right there with the busted radiator on the cowl, with its driver’s-side door in the bed, with no tailgate, with no heart. That car is now Project Cactus.