It’s been a while since we’ve had a Today’s Taillights, which is, as you’d likely agree, tragic. But it’s being taken care of as we speak, as at this very moment you’re engaged in reading about a truly remarkable taillight – really, a whole family of taillights – that are effectively extinct on modern car design. And yet, during the era when these sorts of lights were in their prime, they helped define a brand’s identity, and while occasionally copied, these remain iconic. I’m talking, of course, about the ribbed taillights used across most Mercedes-Benz cars from the 1970s to well into the 2000s.

I’m just about certain that everyone reading this right now is picturing the same thing: big, bold, tri-colored taillights, with deep horizontal ridges molded into the plastic shape, creating corrugated lights that were absolutely unmistakable. These lights were first used on 1971 Mercedes-Benz C107 coupé/R107 roadster, as wide, corner-wrapping units that helped define the distinctive look of that sporty car, which had other ribbed elements, such as the body detailing on the lower door and rocker panels. 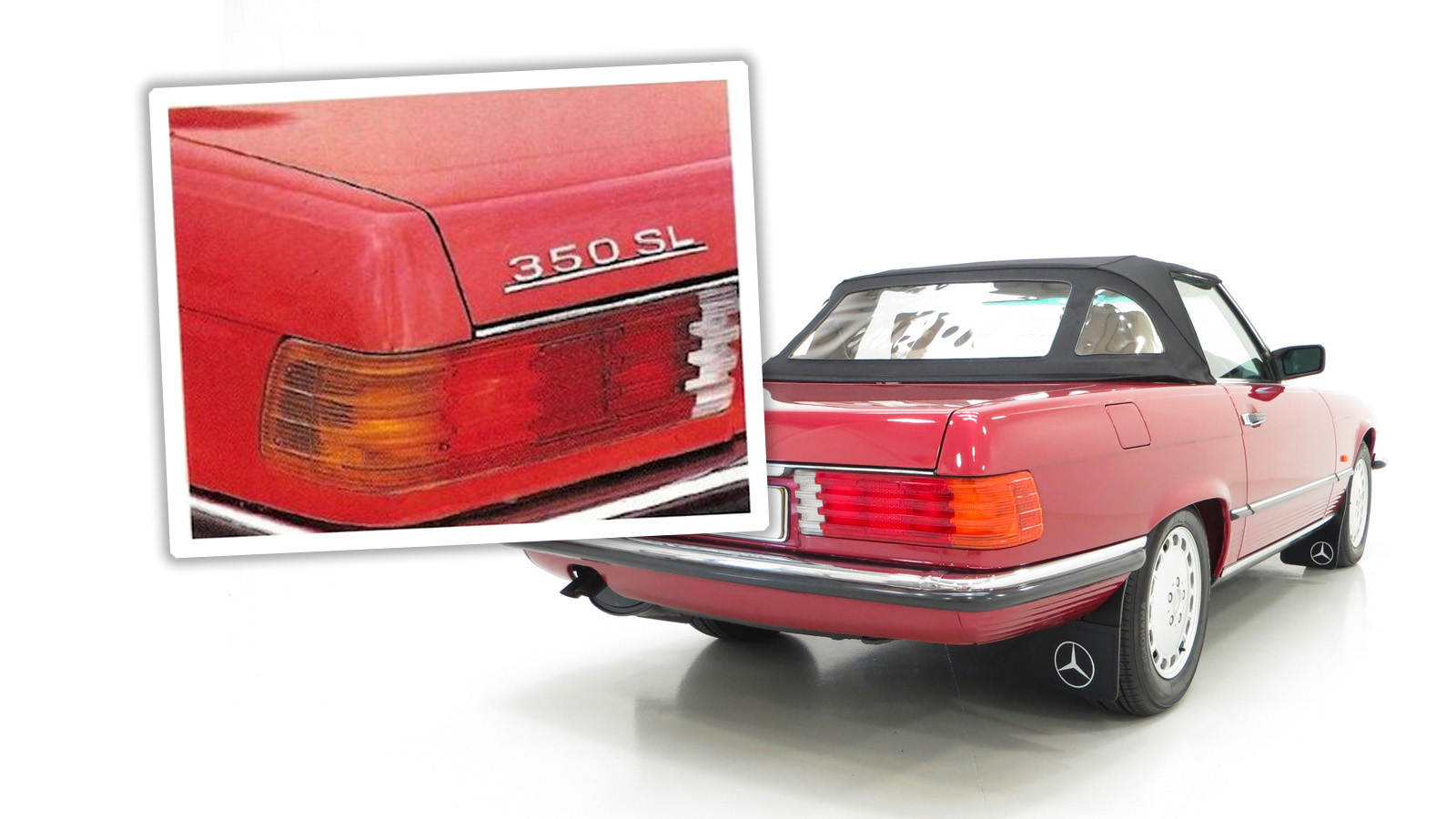 But it wasn’t style that dictated the corduroy look of these taillights – it was safety. The lights seem to have been the idea of Mercedes-Benz’ safety guru Béla Barényi, a legendary designer I’ve written about before in the context of his early work that was shockingly like the Volkswagen Beetle that would come decades later. But, when he got to Mercedes-Benz, he really thrived when it came to safety, as you can see Mercedes themselves proudly crow about in this video:

Visibility is, of course, a huge part of automotive safety, and while having lights on a car is great, they don’t do you any good if they’re too filthy to be seen clearly. That’s why in Mercedes-Benz brochures, the justification for these unusual taillights is given like this: 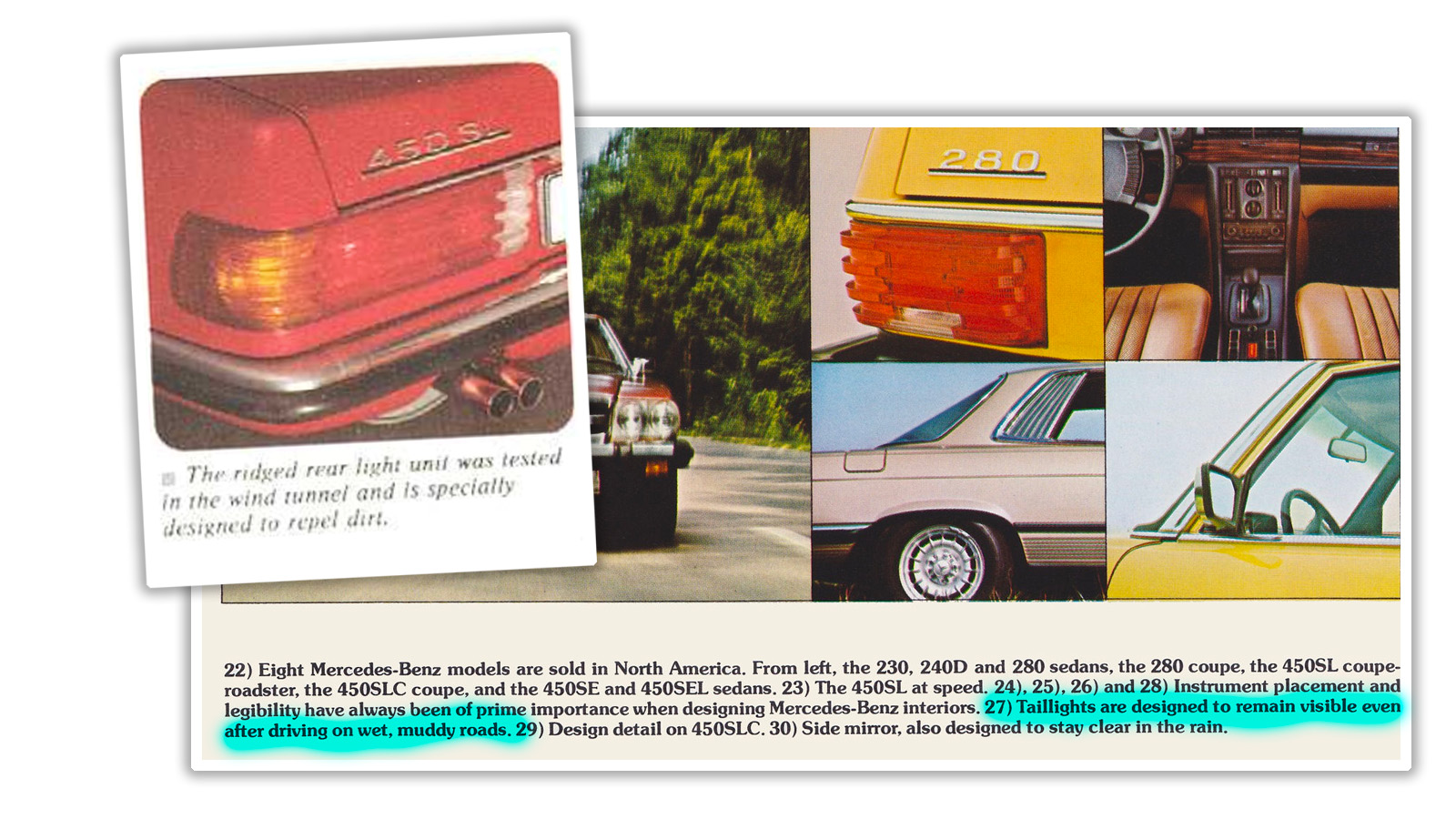 “The ridged rear light was tested in the wind tunnel and is specially designed to repel dirt,” and “taillights designed to remain visible after driving on wet, muddy roads.” The whole point of those deep ridges is so that the taillight stays visible even when all spattered with grime or dust or whatever.

Is this actually true, though? It seems like it would be, just based on the physical nature of those lights. If the surface gets spattered with muddy water, there’s still plenty of recessed lens area there that would remain clean. It has to, right? Surprisingly, there’s not a lot of images online of filthy Mercedes-Benzes, though our pals over at Curbside Classic did test this out deliberately, at least once: 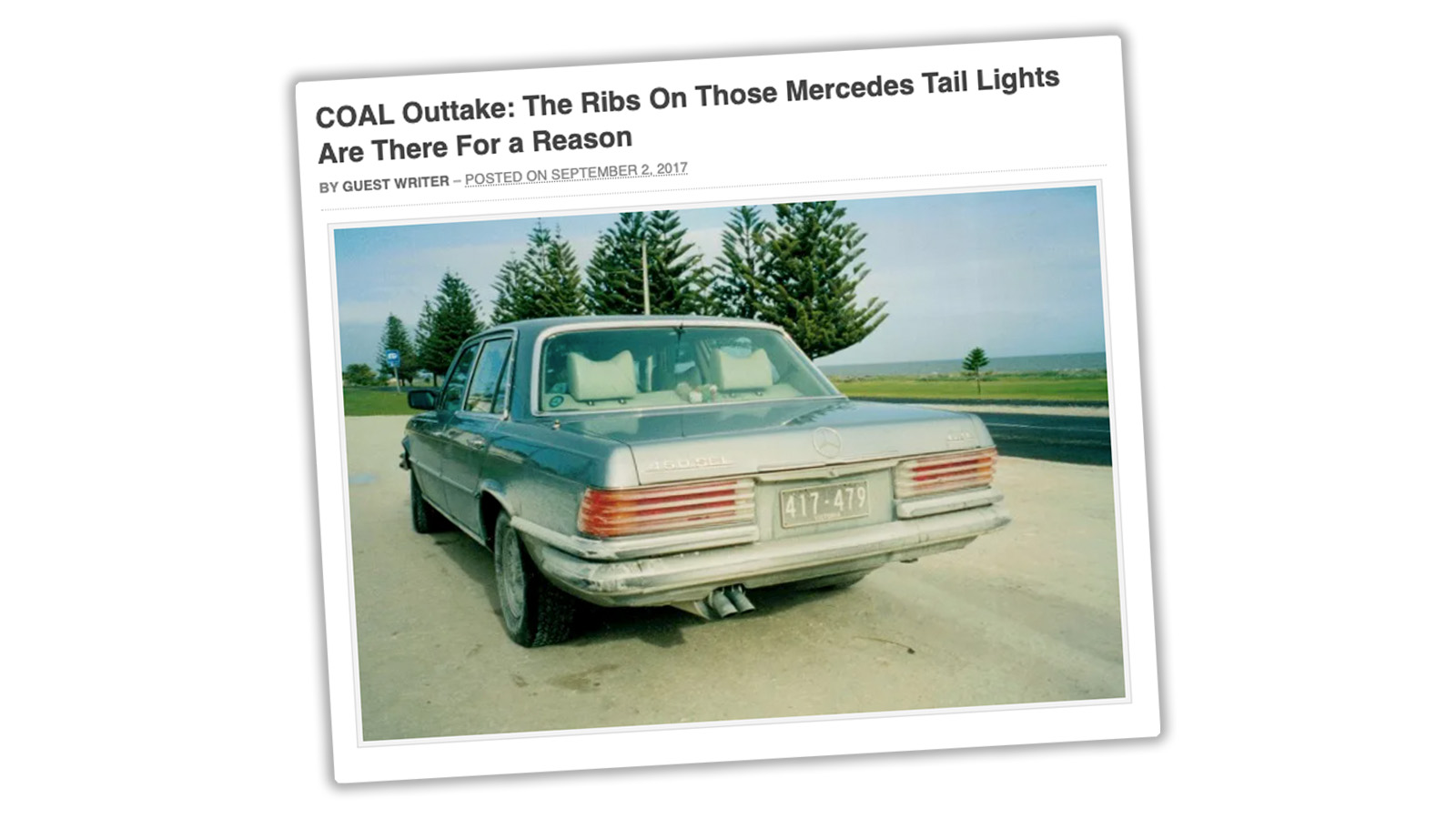 Of course, the flip side of this is that cleaning those lights takes more work as well, since there’s a lot more surface area, and a lot of that area is sunken back about 3/4″ from the surface. If you’ve ever washed a Benz of this era, I bet you can still feel how your fingers felt sliding a sponge into those grooves. I’m feeling it right now. 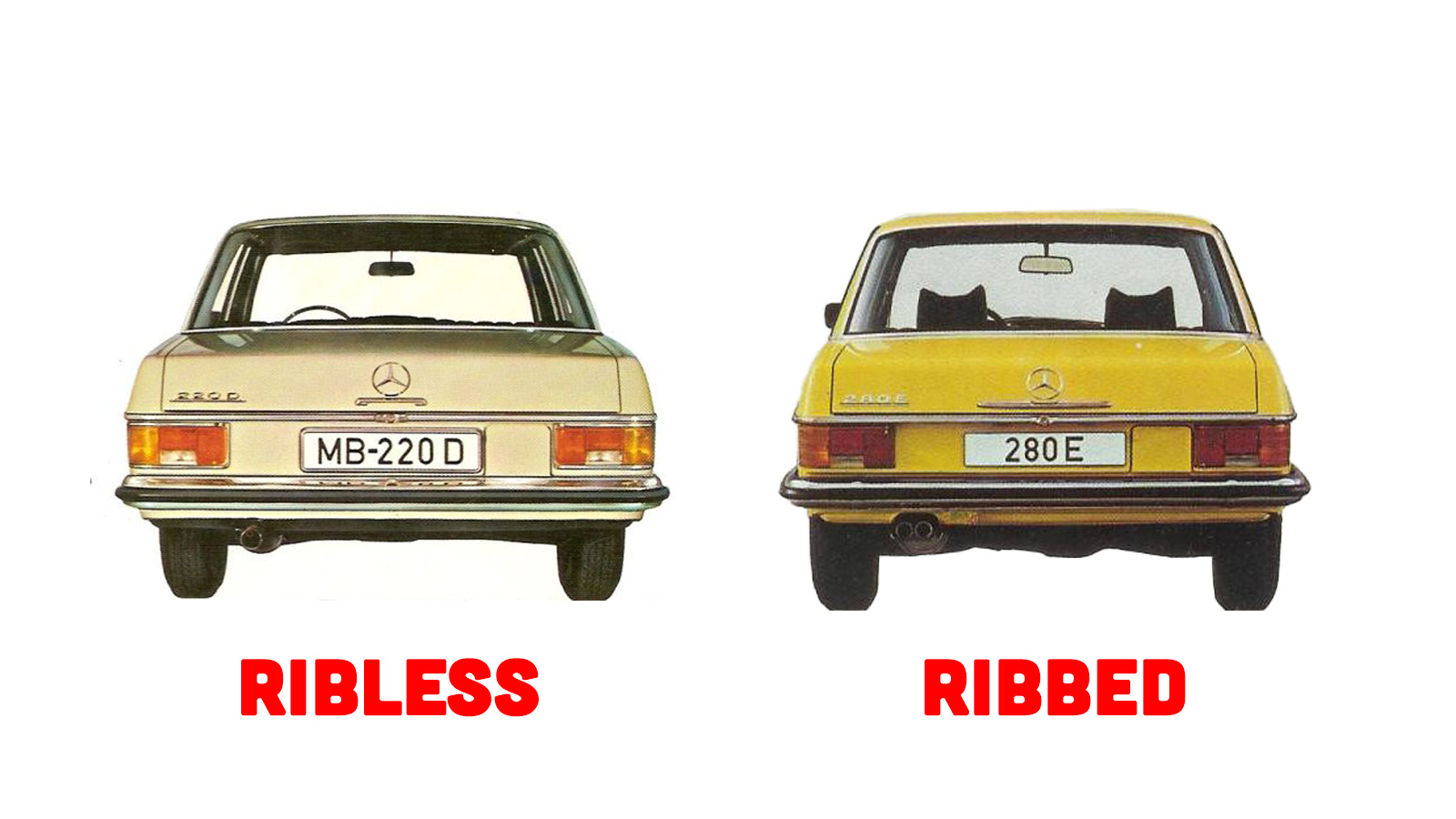 After the initial ribbed light introduction in 1971, other Mercedes-Benzes started getting the treatment, like the W114 and W115 which got same-sized but now-ribbed lights when they were facelifted in 1973, and it didn’t take long to spread to every Mercedes-Benz in the lineup. 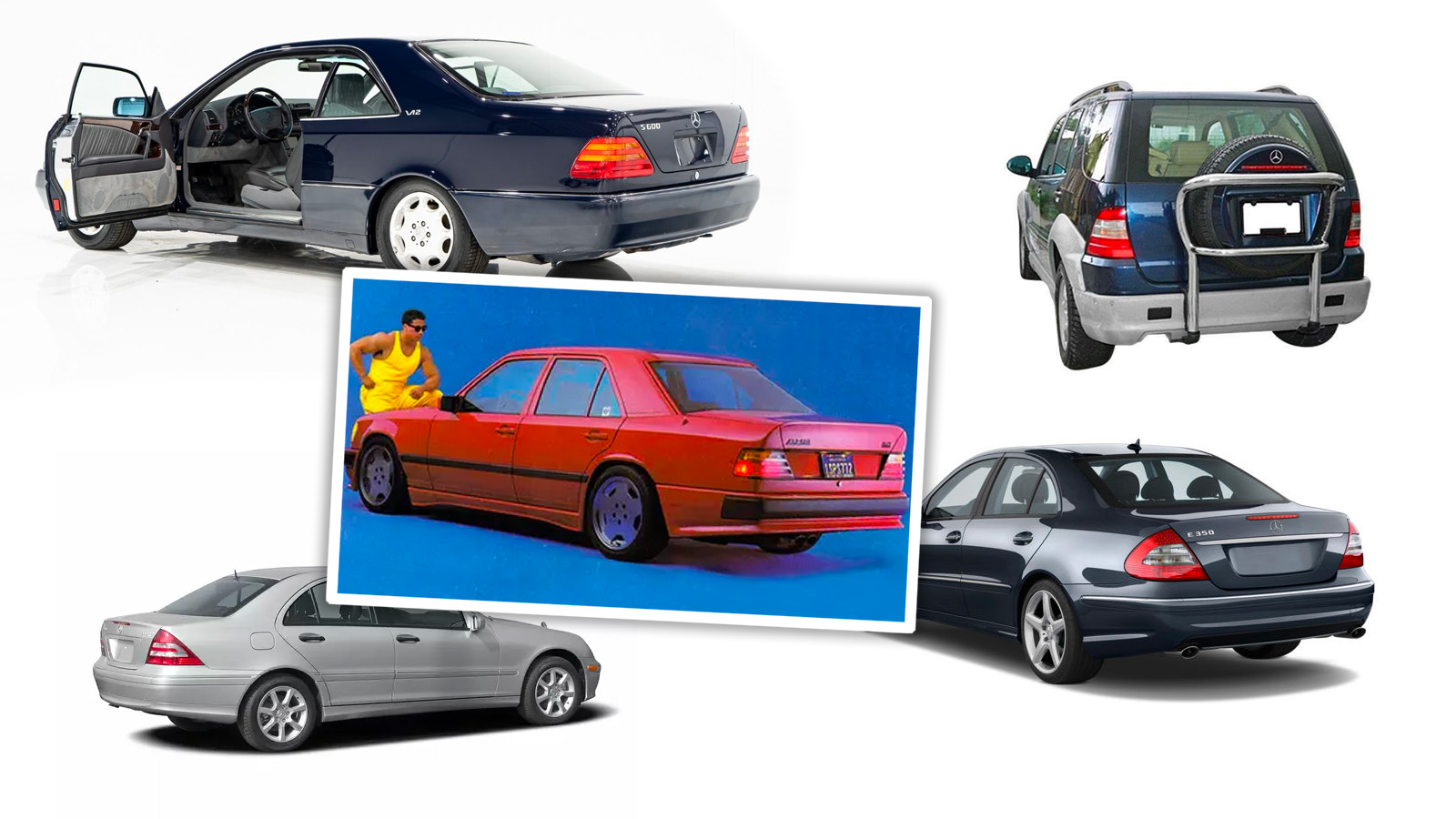 The ribbed taillights as a design theme had a remarkably long run, finally petering out – after getting quite stylized, smoothed, and almost useless for their original purpose by the end – around 2010, giving this distinctive design signature a nearly 40 year lifespan. That’s pretty incredible, especially in the world of automotive, and especially automotive lighting design, which tends to be constantly re-inventing itself.

While there were a few copycats, it’s telling about how associated these taillights were with the Mercedes-Benz brand that there weren’t more. Taillight design tends to be highly trend-based, with designs spreading like wildfire across the automotive world. Remember how clear-lensed Altezza-style taillights started showing up on almost everything in the mid-2000s? That didn’t really happen with these ribbed lights. 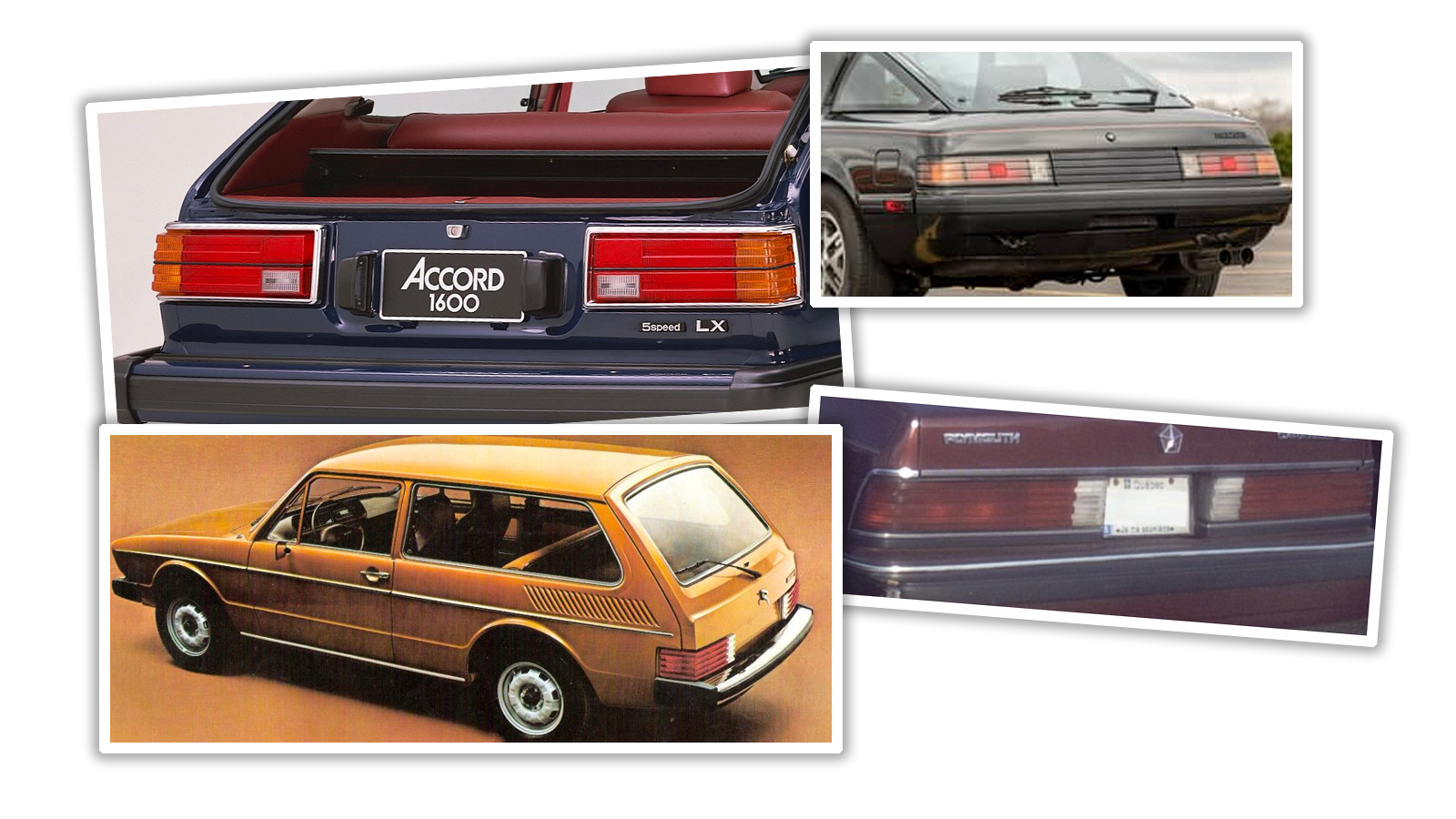 Sure, there were a few, like late ’70s Honda Accords or mid-’80s Mazda RX-7s, Plymouths, and even some Brazilian Volkswagens, but I think generally if you had ribbed taillights, it was seen as trying to copy Mercedes, and just came off as derivative.

Seeing these ribbed lights is becoming less and less common, but there are still plenty out there. So the next time you see some on the road, take a moment to appreciate them and, if you can, splash some filth all over them. The owner won’t mind at all, especially once you explain that you’re just letting those fantastic taillights really live up to their raison d’etre. I bet they’ll thank you.

I'm a co-founder of the Autopian, the site you're on RIGHT NOW! I'm here to talk to you about taillights until you cry and beg me to stop, which I absolutely will not. Sorry. Hug? Also, David's friend.
Read All My Posts »
PrevPreviousWhat It’s Like Fixing Cars Infested With The World’s Biggest Spiders
NextI Toured The Inside Of An Airstream Rangeline. Here’s How The $131,882 Camper Van Compares To Its CompetitionNext